After the museum it was onto Green Island, the last mystery I had to solve in Macau.  Located on the Northwestern tip of the peninsula next to the Border Gate, I’d seen it marked on maps a million times before, but had no idea what it was supposed to be.  Given its name, I figured there had to be a park or something related to Nature there at the very least, and I was curious to see what I’d find.

About 20 minutes away from the Fire Services Museum, I’m glad to say that I went there so you don’t have to.  For as much as I love Macau and want to live there, if someone gave me an apartment in Green Island to live in, I think I’d take a pass and keep living in Zhuhai. 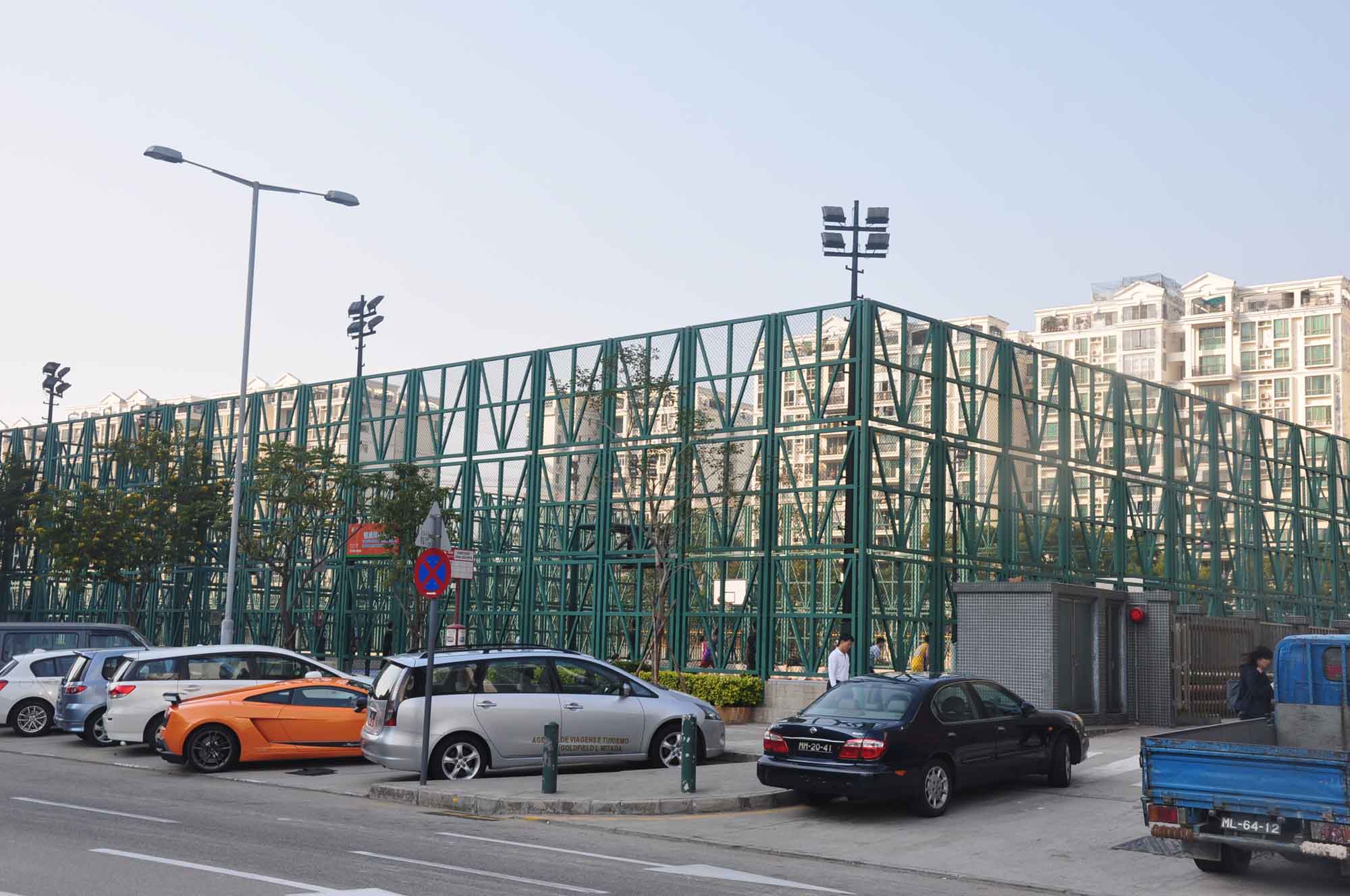 The armpit of Macau and a bleak depressing place, they play basketball is prison yard cages while the iron and barbed wire walls that separate Macau from the mainland are always in view. 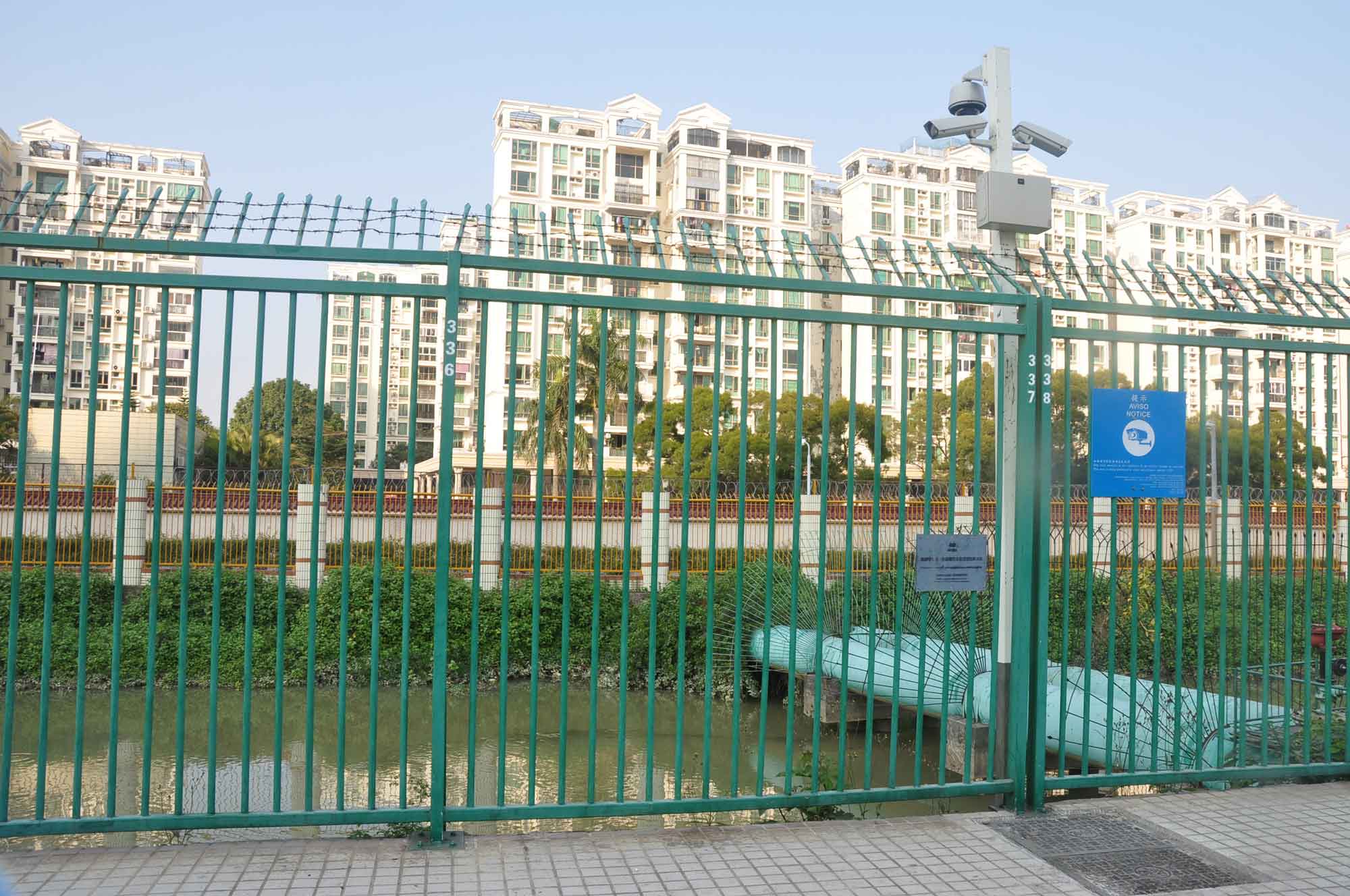 The majority of commercial shops are empty and not rented out, while the only businesses that seem to be open are the ones that fix cars.  Not that I have anything against mechanics but I don’t usually spend my vacations hanging around the grease and grime of body shops. 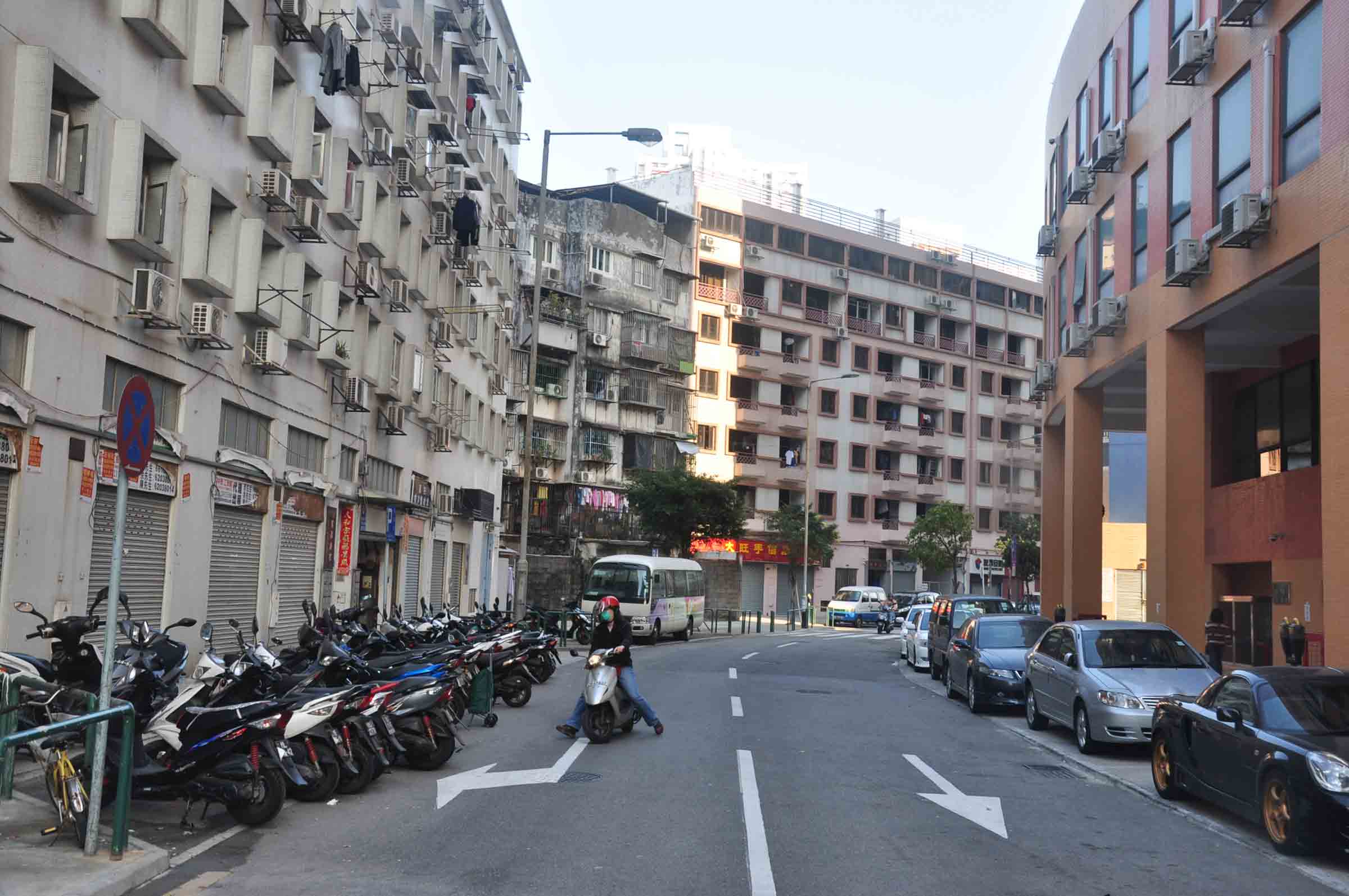 I will say one positive thing about Green Island however, at least when they wait for buses up there, they do so in style. Who knows though, that might actually be one rude sofa, since no one in the picture is actually sitting on it. 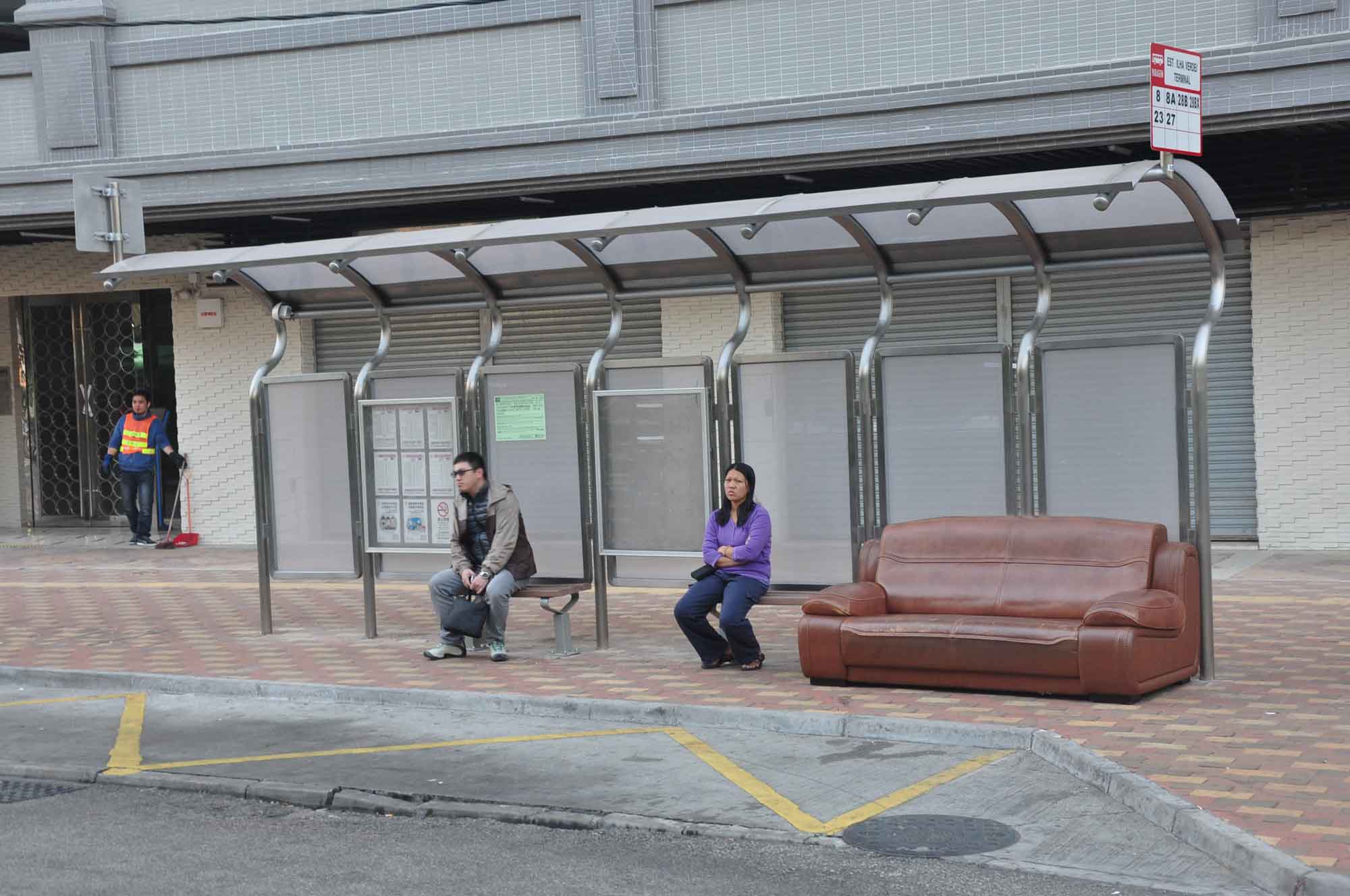 The kicker is that Green Island isn’t even an island, although I’m sure it was years ago, prior to land reclamation.  (Indeed that’s the case, as one of the photos at the Rickshaw proves.) 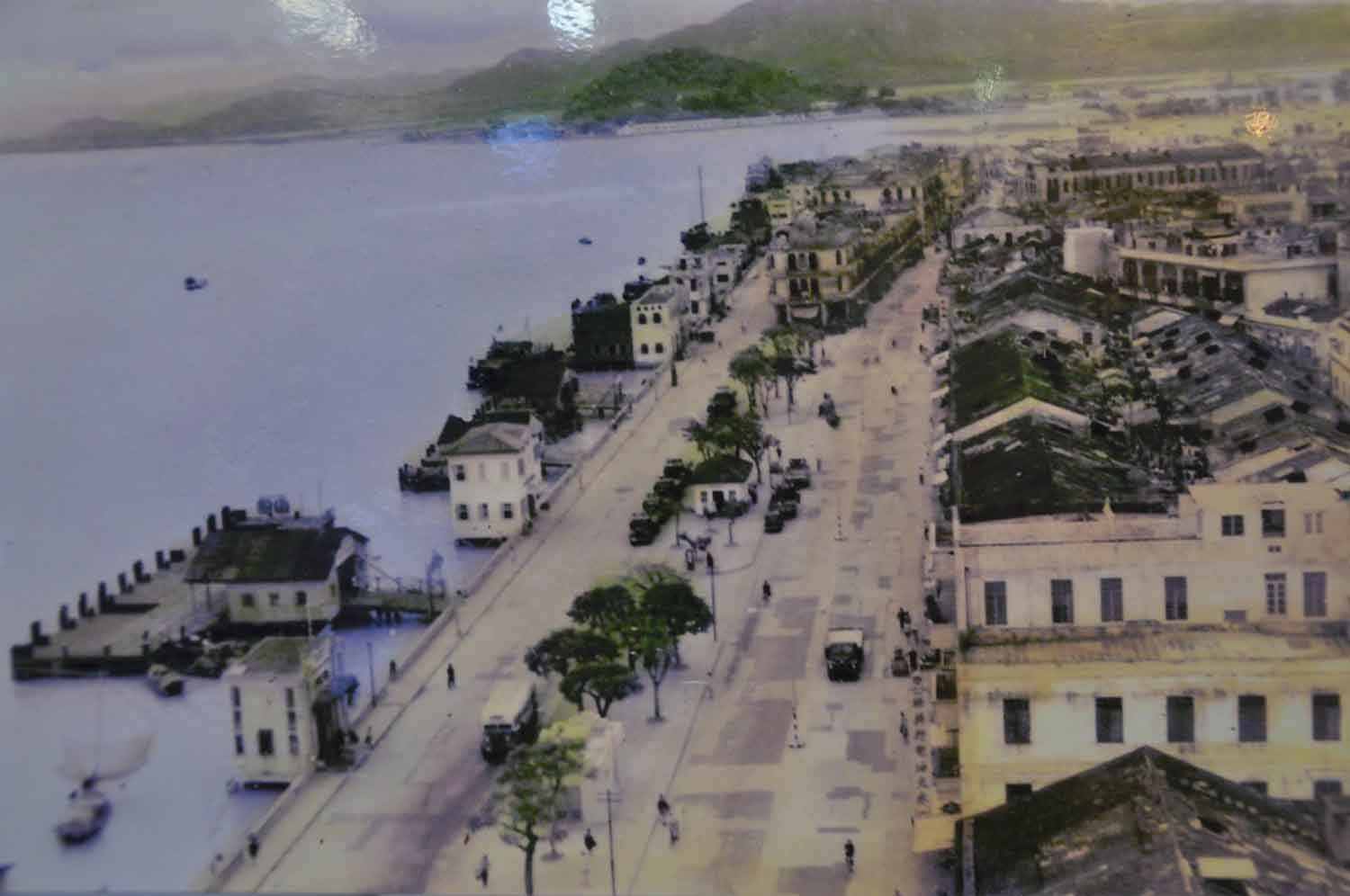 Now it’s just a fairly elevated hill, full of trees and bush with no walking paths.  I tried climbing the stairs that go up one side of it, but they didn’t end up going anywhere, and I had to turn around.  In my view, they should just annex the whole area and give it to Zhuhai.  A dirty place like this doesn’t belong in Macau. 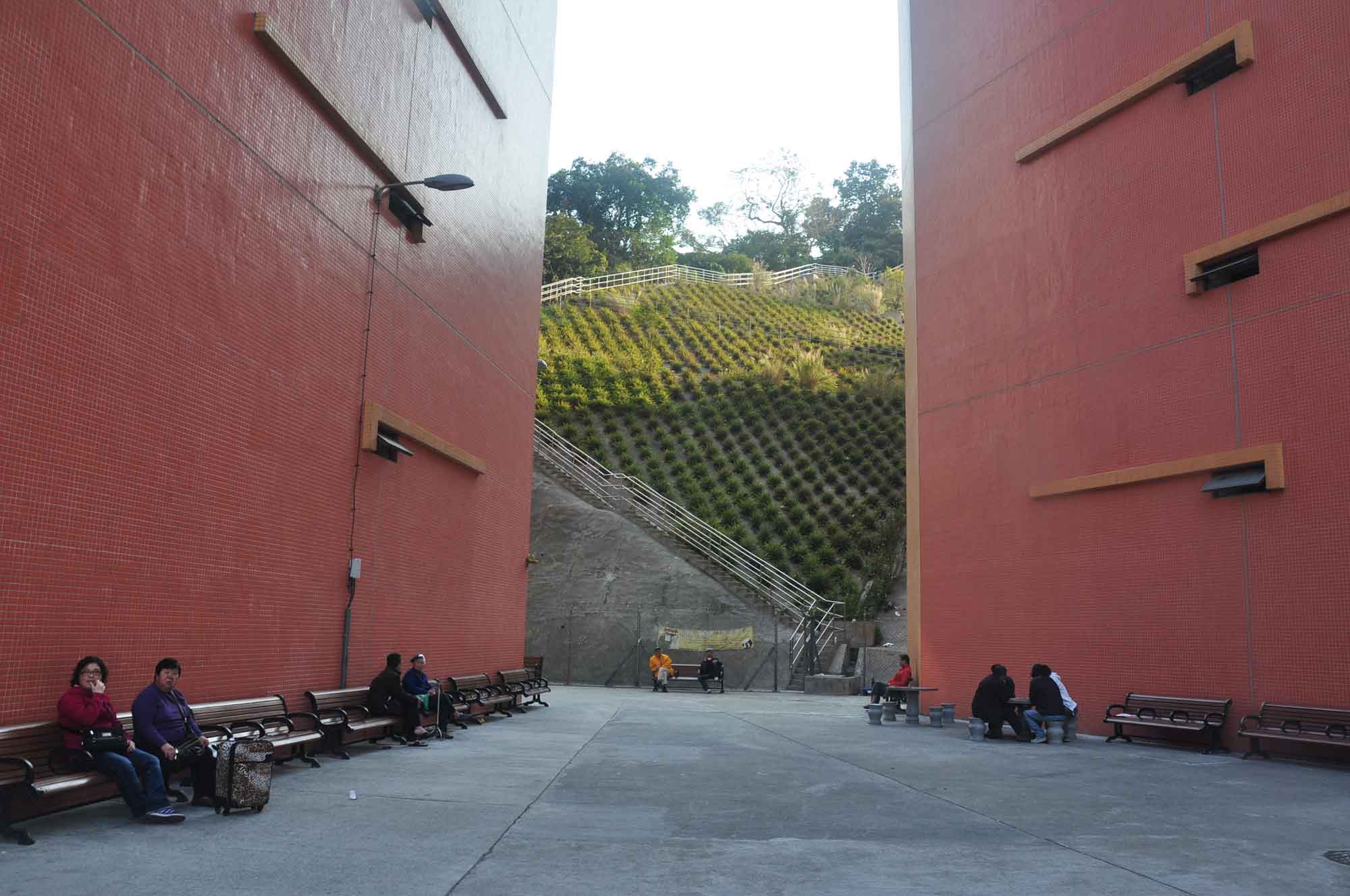 The last thing to do on the trip was have dinner at Afonso III, and I had no idea how that was going to turn out either.  That definitely had a chance to combust too, and go belly up a lot faster than Green Island.  As I made the long walk back into town, all I could do was hope for the best. 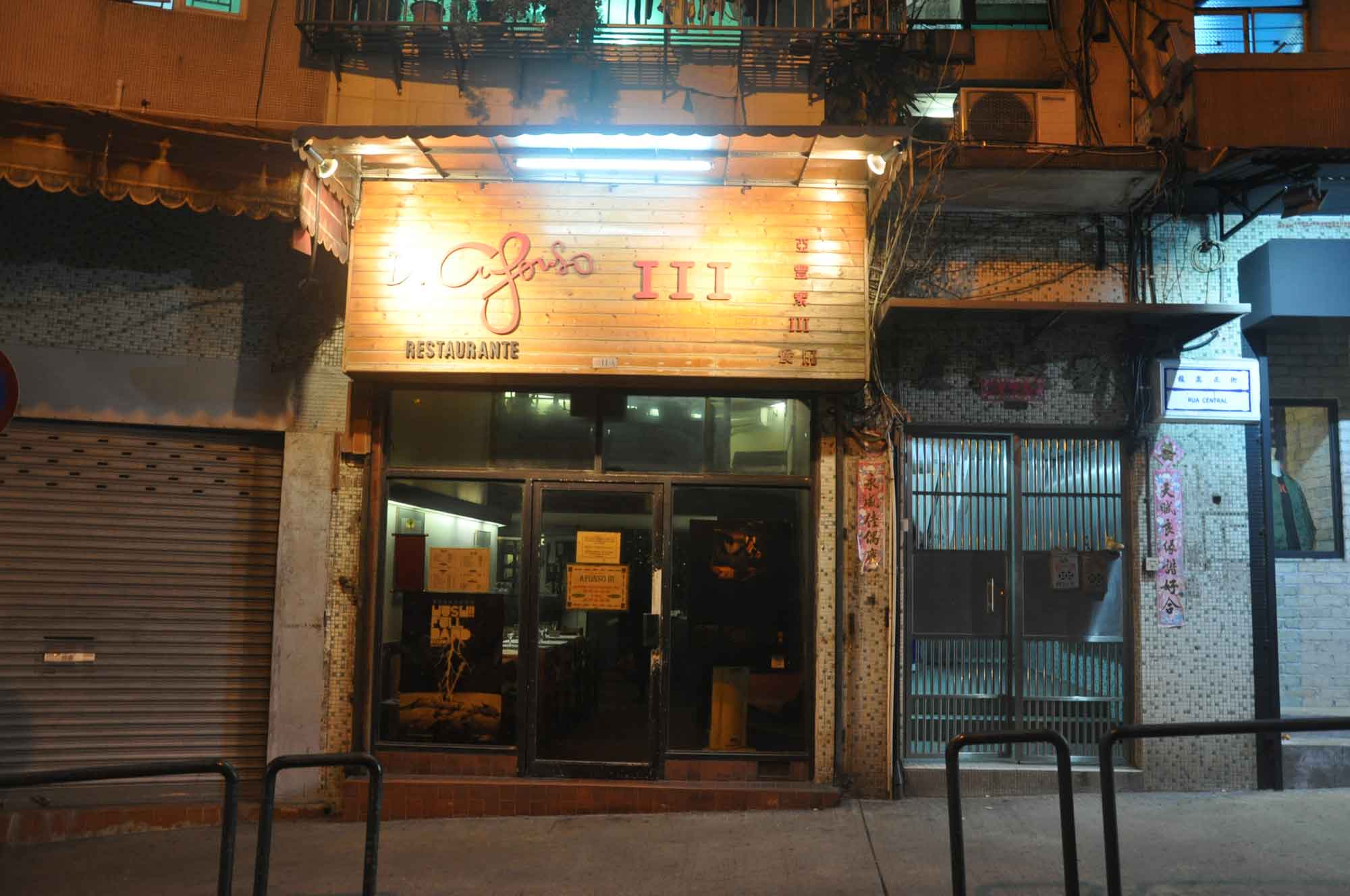 Located on Rua Central close to San Ma Lo and Senado Square, I got there at about 6:30 pm.  I deliberately chose to come in the evening because it’s impossible get into at lunch.  Due to the proximity of the courthouse, it’s overrun daily with lawyers and cops who turn it into their afternoon playhouse.  At dinner though its far less busy and I was the first one there. 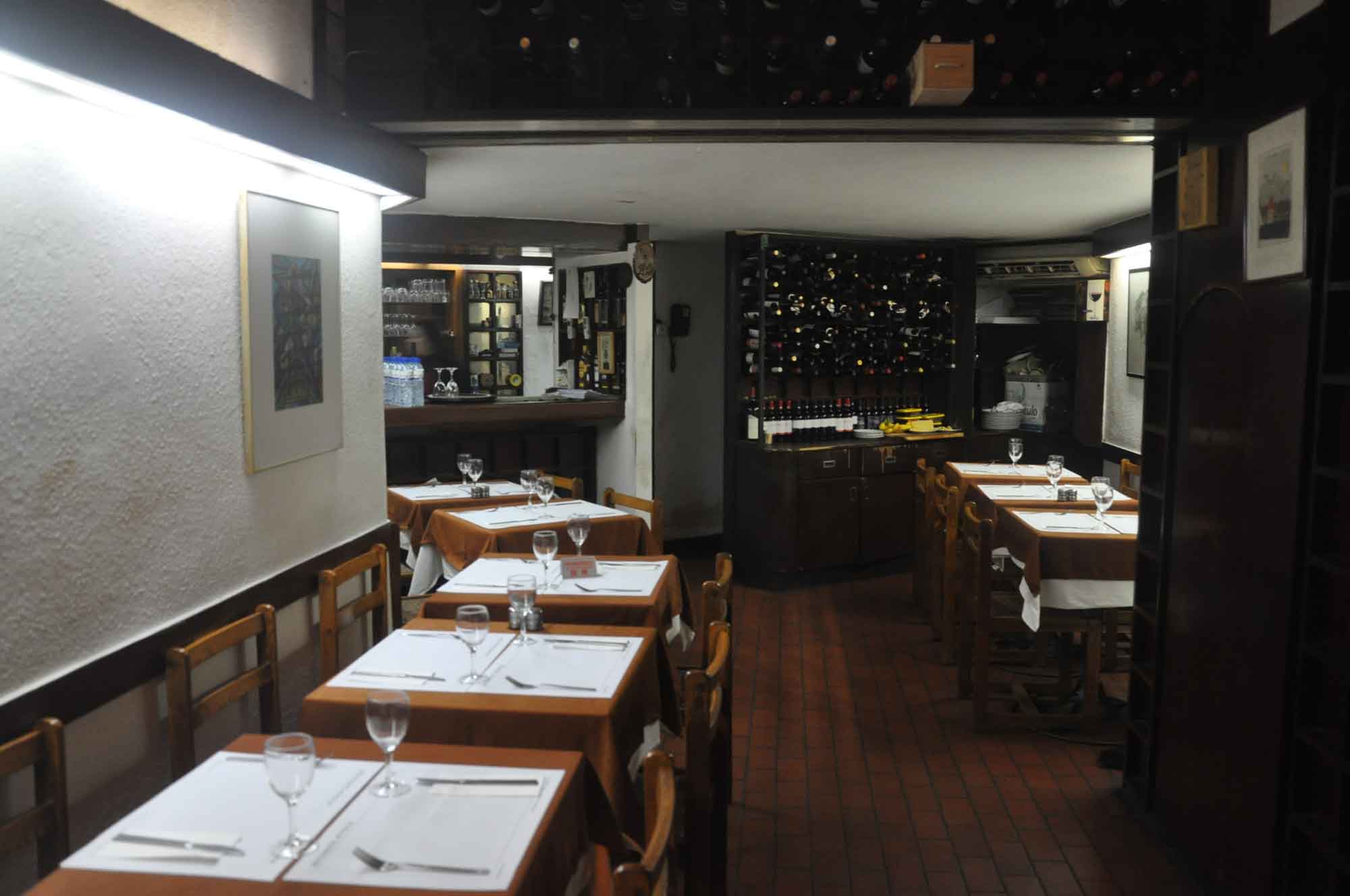 The Filipino waitress greeted me as she was tidying the place up, still getting it ready for the night.  From what I’ve heard, she and the Chinese waitress are always at each others throats and don’t mind letting the world know it, but I didn’t see any fireworks that night, maybe because the Chinese waitress wasn’t there.  I wouldn’t call the Filipino waitress the friendliest person I’ve ever met, but she was neither rude nor unprofessional, as others have written, and I was not displeased with her service. 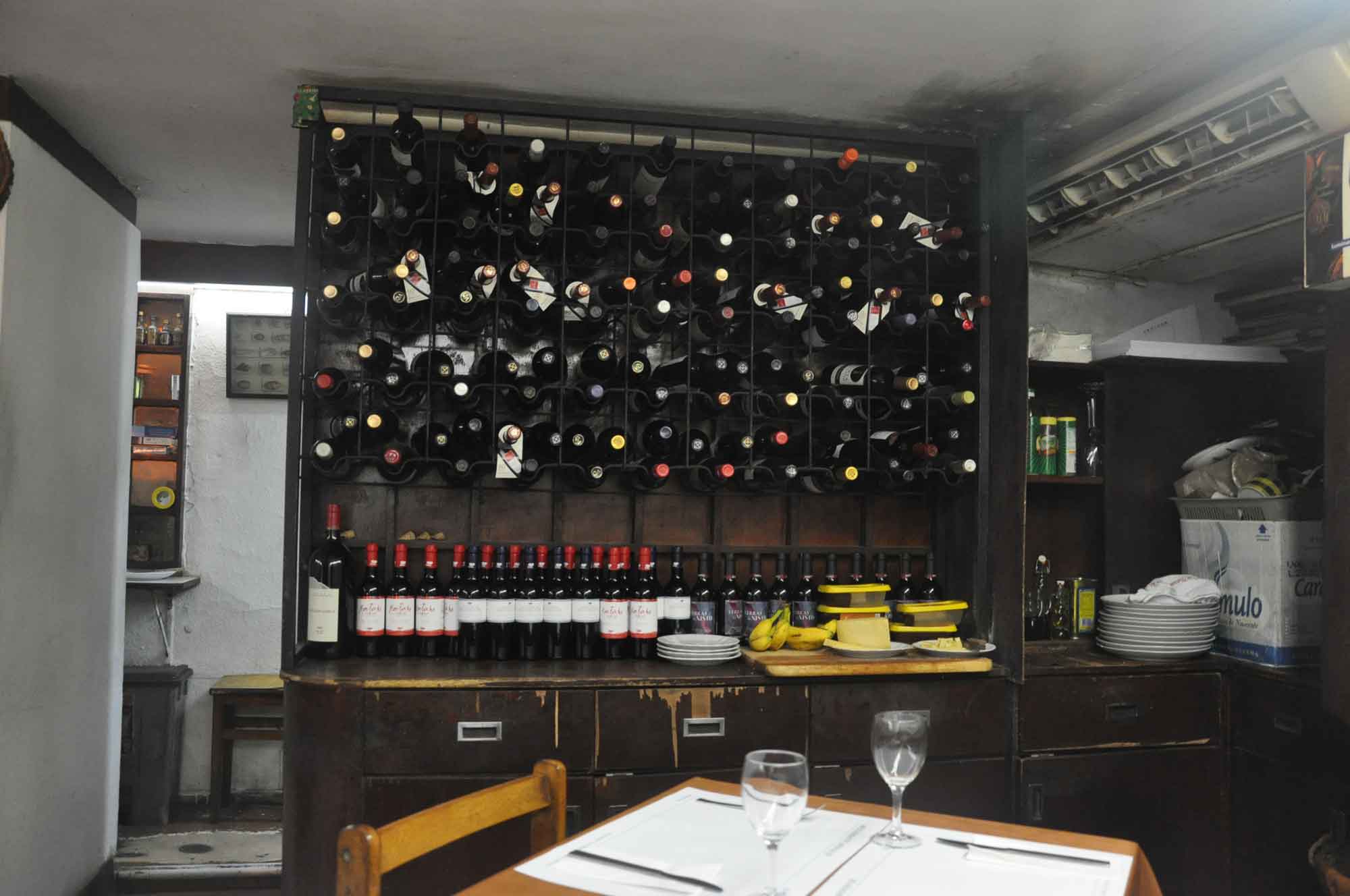 Afonso III has no wine list, instead I had to choose indiscriminately from a wine rack beside the bar.  They also have cheap looking wine glasses and nothing ever gets decanted, so temper your expectations for some kind of amazing food-wine pairing.  Still though I was quite pleased with the red I chose, the Quinta da Alorna from Ribatejo province, and would definitely go for it again, especially since it only cost $150.

Sticking to their Specials menu, I tried Vegetable Soup, Clams with Garlic and Duck Rice.  Just like Carlos earlier on in the day, the food I had did not disappoint and was clearly 5 stars.

The clams came with the perfect sauce to complement them, neither too strong nor too light, while the Duck Rice was a thick gorgeous mixture of succulent love.

For all the bad rap that Afonso takes, he let me switch the Duck Rice when it came with cheese on top.  I told the waitress I was extremely sorry that I didn’t eat cheese and would pay for a new one if that’s what it took.  She nodded, replaced it, and when the bill came at the end of the night, I was only charged once.

As for Afonso, he kept to himself near the bar for most of the evening, neither smoking nor drinking nor doing anything untoward, and I found his behaviour completely professional.

All told, my bill for one was a paltry $443, which included a bottle of wine.  You can’t beat that in Macau these days, especially when the food was as good as it was. 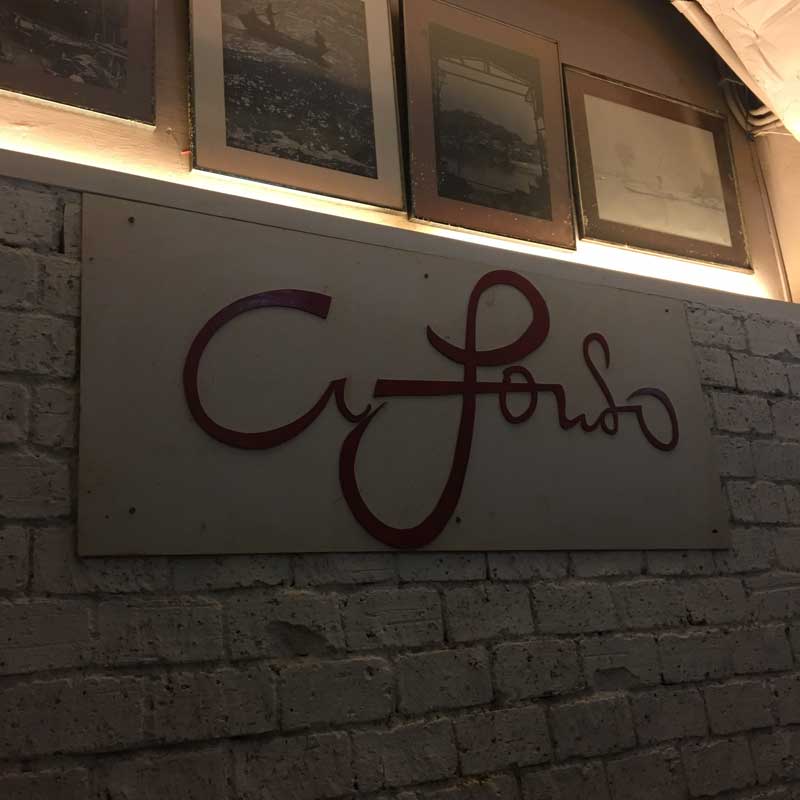 Since visiting Afonso III this first time, I’ve been back there many times the past two years and never seen any of the antics that were described online.  I’ve always found Afonso to be a perfect gentlemen and the fact that’s he’s got such a loyal contingent of regulars flies in the face of all the garbage that’s written about him online.

The iron bar story is probably just that, a work of fiction conceived by a clown who’s got an axe to grind so he anonymously rips people online.  I’m not buying it though and never have.  Afonso III has always been and continues to be one of the best Portuguese restaurants in town, and I’m confident you’ll have a very good meal there if you go.  I know I always have.

Just a quick note, Afonso III now has a new location, next to Kiang Wu Hospital close to Camoes Park.  Since it’s across town, it’s no longer packed at lunch and tables can be had easily then.  Be aware it only opens at 12:30 pm though, not the customary 12:00 pm.

After Afonso III, I made the short walk back to the Sofitel for the free shuttle bus back to the Border Gate.  While the Grand Lisboa was definitely closer they usually require guests to have a tag provided by the casino as proof they’ve been gambling, or else they won’t let you on the bus.

As I walked down San Ma Lo, I thought that this third Trip Story would probably be the last one that I’d have to do for a long while, simply because I was out of places to visit.  The 3 Trip Reports cover 11 days in all, which is about 8 more days than most travellers spend in Macau, so they are extremely comprehensive, if nothing else.

Perhaps the next one will revolve around the Cotai Strip and activities to do there, once all of the new monster hotels are finished by 2017.  I’d also like to do a four day Travel Report about Hong Kong since many visitors who come to Macau also see Hong Kong as well.  Finally, if everything works out, I’d like to take the narrative back to Portugal and see how it compares to Macau, especially in terms of people, dining and architecture.