The Grand Lisboa is barely a decade old, but it’s already a Macau landmark.  Located beside its sister hotel, the (now) low key Lisboa, the Grand Lisboa steals the show with its oversized reflective dome bottom and glaring gold tower.  Soaring high above the Amizade Strip at 856 feet, it’s the tallest building in Macau.

At night, the hotel is ablaze in a flurry of light and color, a stunning spectacle to behold that always draws loads of tourists to its large lotus flower base, cameras most definitely in hand.

The Grand Lisboa casino takes a few themes from the old Lisboa and combines them with a lot more space and colour.  Fans of the Lisboa will appreciate the Grand Lisboa’s dark walls and black circular beams, as well as the giant glowing orb on the first level that pays homage to all of the ones that change colour on the Lisboa’s second floor.

Although similarities between the two casinos do exist, the Grand Lisboa possesses an extra dimension of space and light that the Lisboa has never had.  The same sense of elegance that exudes from the Grand Lisboa’s eye catching exterior and lavish lobby is repeated throughout the casino, making it a very pleasant place to gamble in.  I always personally just enjoy being on its broad floor and under its gold roof.

One of Macau’s largest casinos, the Grand Lisboa offers 270 tables and more than 700 slots.  Minimums are excellent for a casino of its size, with Commission Free Baccarat, Blackjack, Caribbean Stud Poker and Sic Bo all available for only $200.  Slots start at 5 cents and max out at $10, while electronic games consist of Roulette ($10), Big Wheel ($25), Baccarat ($30), and Sic Bo ($30).

In a major oddity for an SJM casino, free beer is available at the tables, provided you can prove you’re actually gambling.  Don’t expect that generosity for slot play though, because it simply won’t happen.

Along with Ponte 16, the Grand Lisboa is the only other casino in town to offer a sports book, which unfortunately just offers soccer, and no major North American sports.  Off track horse racing bets can also be made there.

The Grand Lisboa no longer has Craps, Pai Gow and Texas Hold Em.

Fortune Wheel – Minimum bet is $100.  This is the only casino in Macau besides the Venetian where this game is still available as a table game.  Most casinos only offer the electronic version, called Big Wheel.

Dead Chip Program – The Grand Lisboa’s dead chip program is very underwhelming; the majority of independent junkets give more than 1% on buy ins over $100,000.

The Grand Lisboa also offers Program V, which would only benefit whales who roll in excess of $10,000,000.

Even though the Grand Lisboa was meant to be a modern version of the original Lisboa hotel, it’s very difficult to find similarities between them. 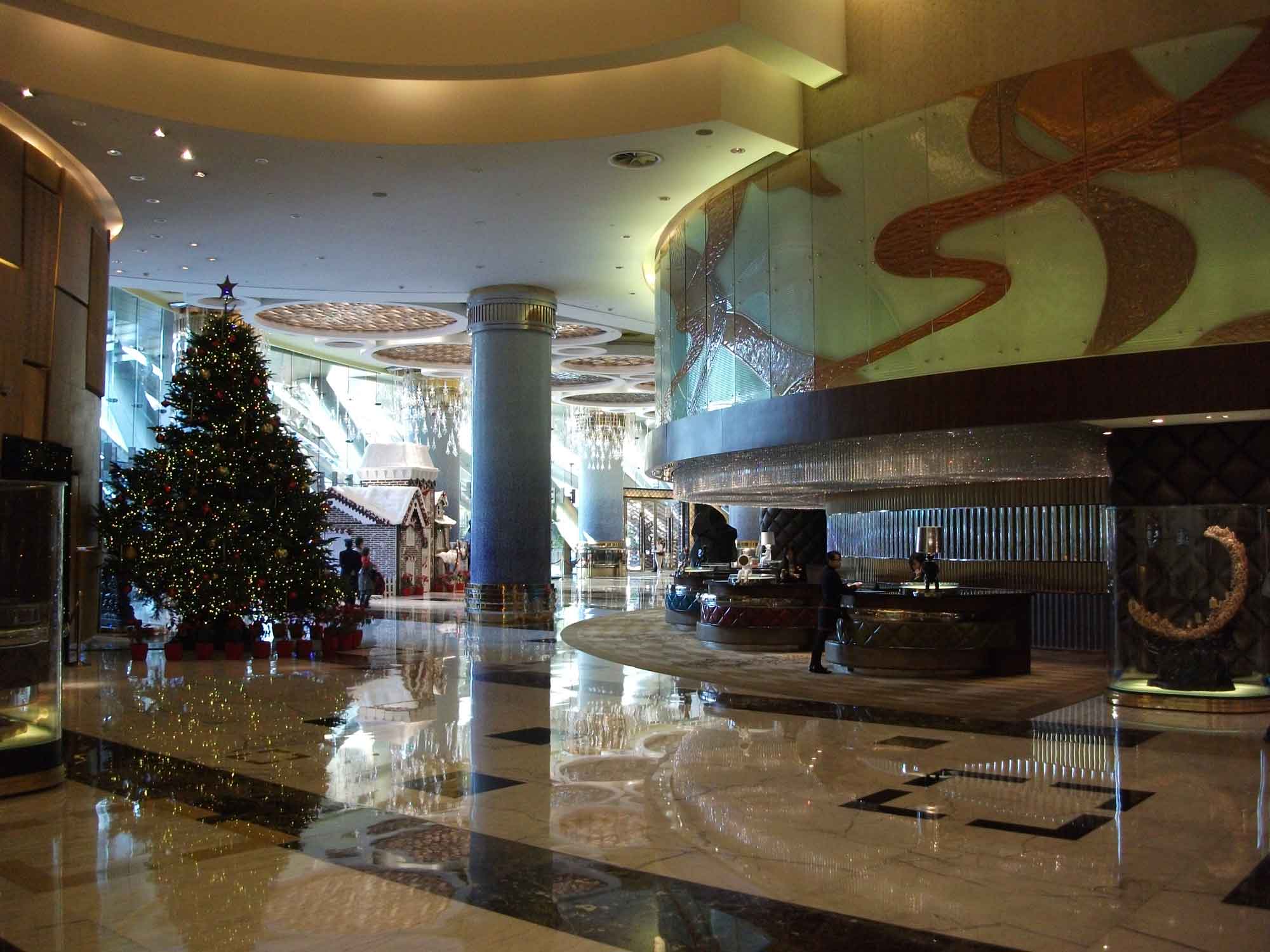 The Grand Lisboa is cut from the same cloth as the Wynn, MGM or anything you’d find down on the Cotai Strip.  That’s to say, it offers all the amenities and comfort of a contemporary 5 star hotel, but none of the personality or style that made the Lisboa what it was, a landmark hotel synonymous with Macau for over 40 years. 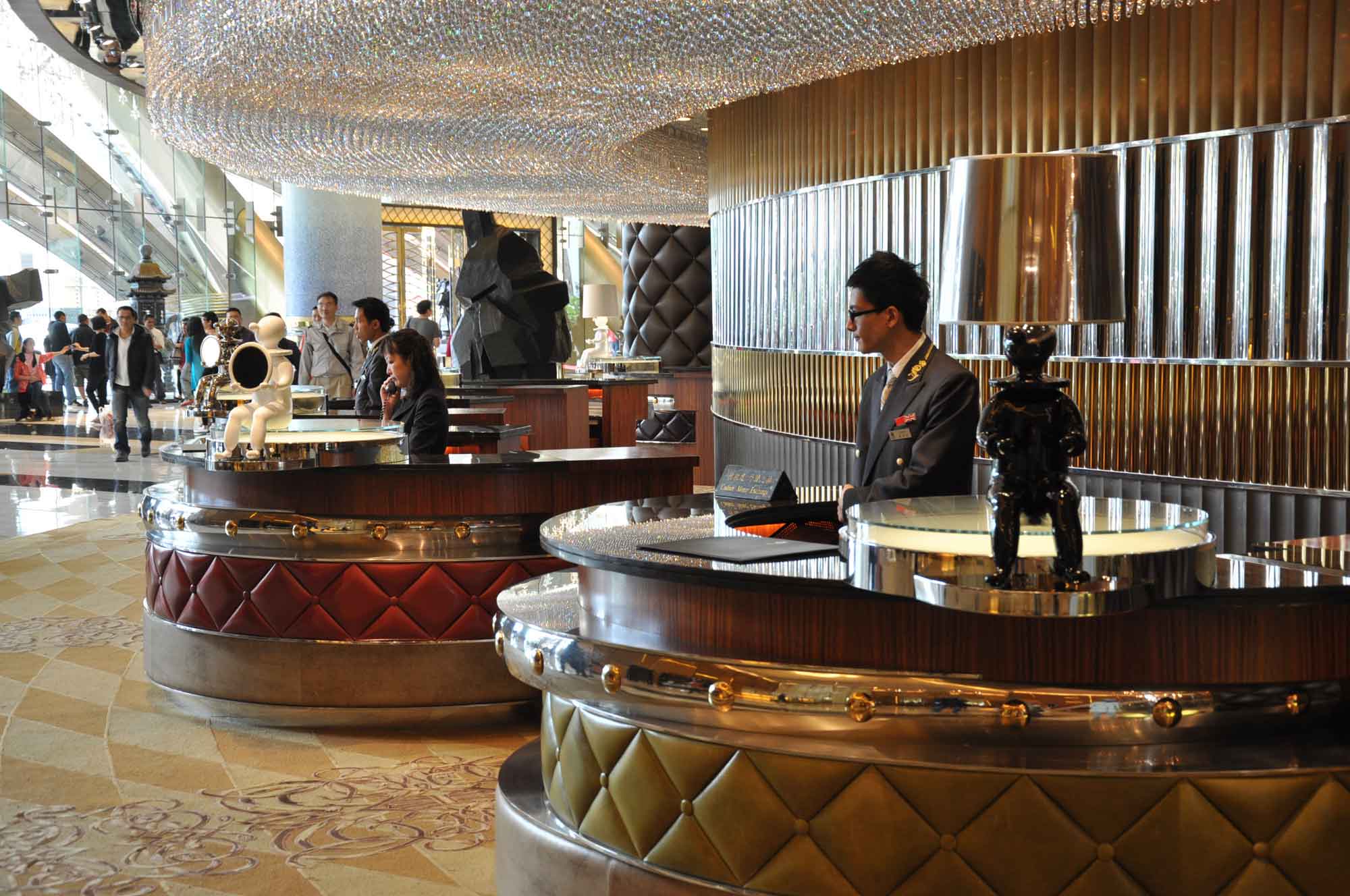 Perhaps the only parallel I can draw between the two hotels is that both of their lobbies are superbly designed, and full of paintings, sculpture, jade and other artwork that Mr Ho collected through the years. 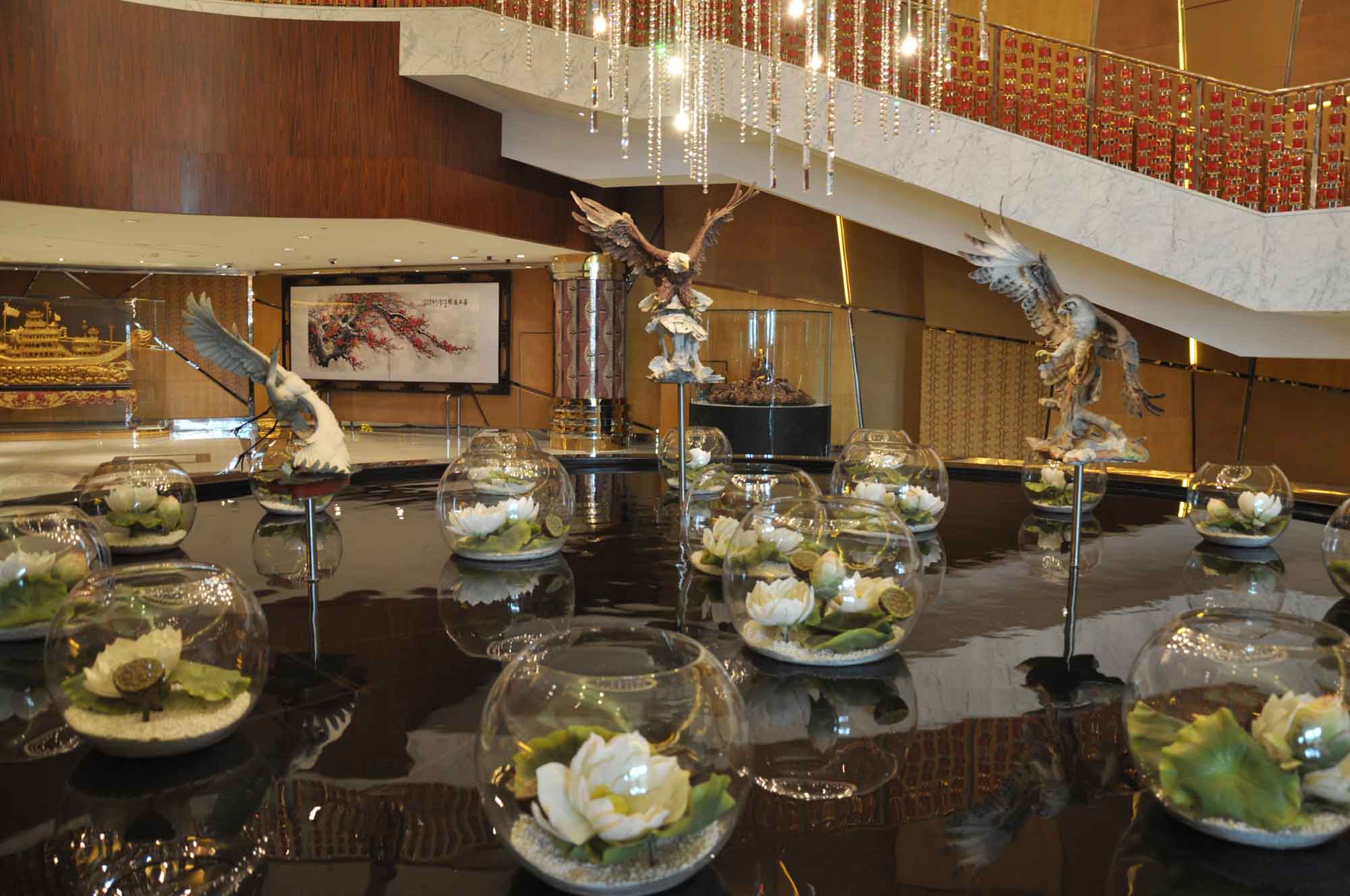 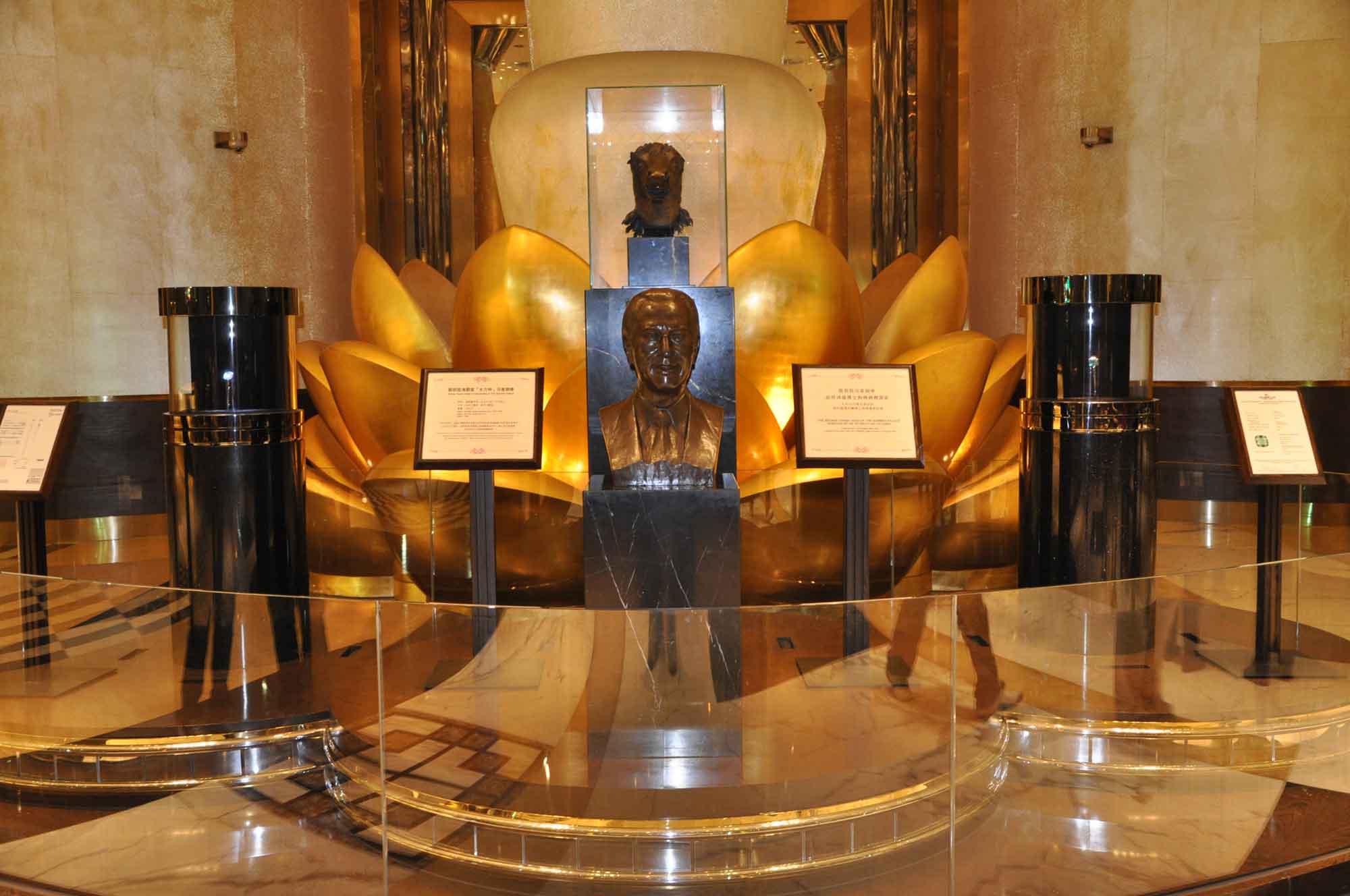 The Star of Stanley Ho is the world’s largest cushion shaped internally flawless D-color diamond, and while I don’t know its price, I guess it cost more than the $8.85 million US dollars Ho paid for the horse head. 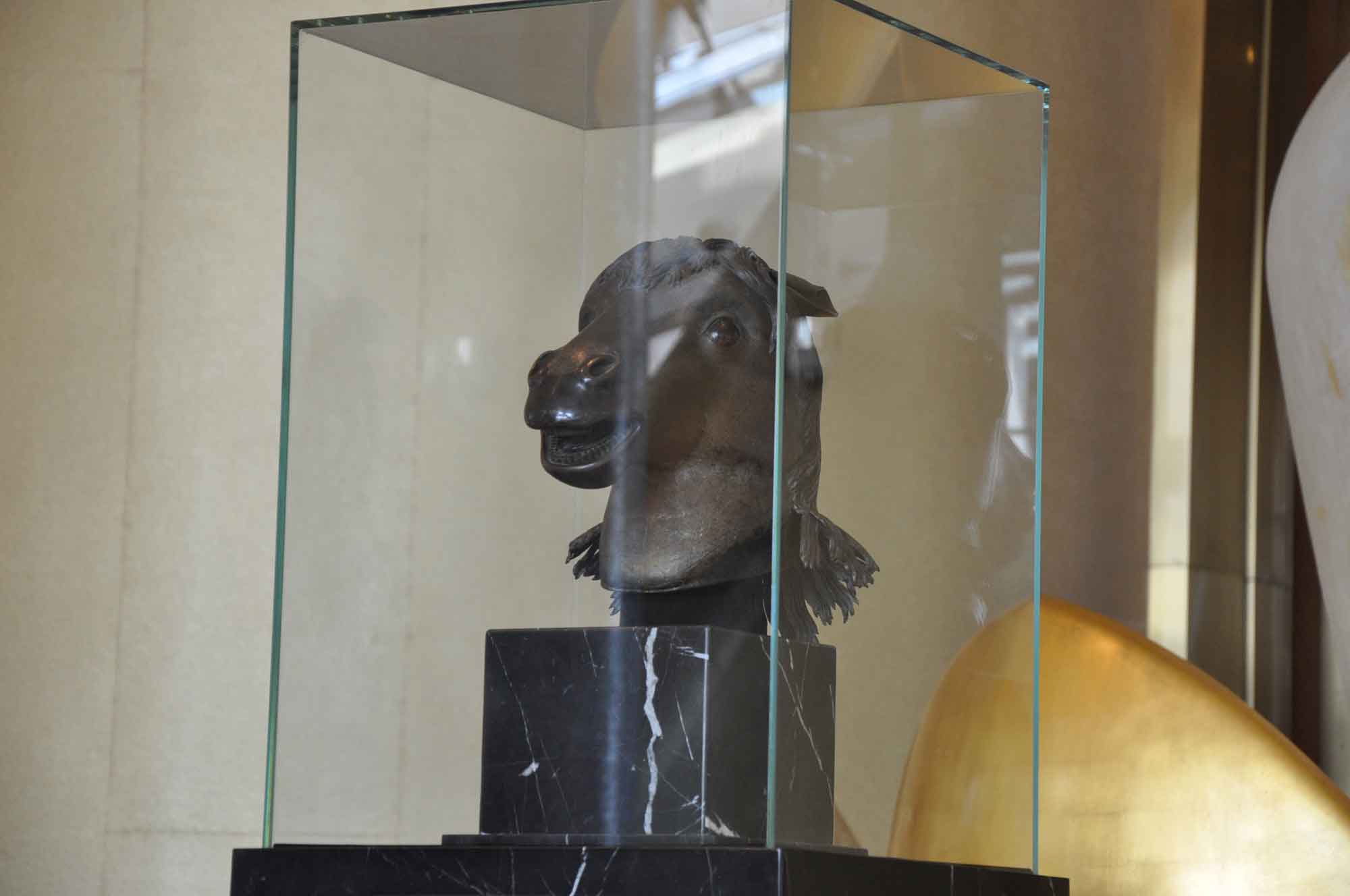 (Sadly, the horse head is no long there, having been returned to a museum in Beijing in 2019.)

Regardless, all of the art on display in the Grand Lisboa lobby is worth a look, as is the lobby itself.  In my opinion, the only better one in the city is the one next door.

All told the Grand Lisboa has 430 rooms and suites with prices usually a bit lower than the nearby Wynn and MGM.

Prices below are in Macau Mops, including all tax and service charges:

As always, make sure to check out third party travel websites like Booking.com or Agoda to make sure you’re getting the lowest rates.

I stayed at the Grand Lisboa for one night on October 19, 2017.  I paid $1407 Mops for a Superior King which was automatically upgraded to a Deluxe King, I didn’t even have to ask.

Check in was a hassle as I tried to do it early, around 1 pm.  After getting registered and paying the standard $1000 deposit, I was given a card with my room number and a reminder to come back at 3 pm when it would be ready.  Upon return I expected the concierge would just hand over a room key but I was made to stand in line again for another 20 minutes.  As I stood there stewing I asked the bellhop why I had to check in twice, which he conveniently forgot to answer.  Oh well, I thought, at least I got a free upgrade.

Having stayed at the Lisboa before I kind of knew what to expect from the Grand Lisboa room and it didn’t disappoint.  What is usually outlawed by decency and common sense is typically allowed to flourish, as evidenced by the Batman inspired lampshades, hanging crystal and whatever that fluffy red rose thing is that hangs over the bed. 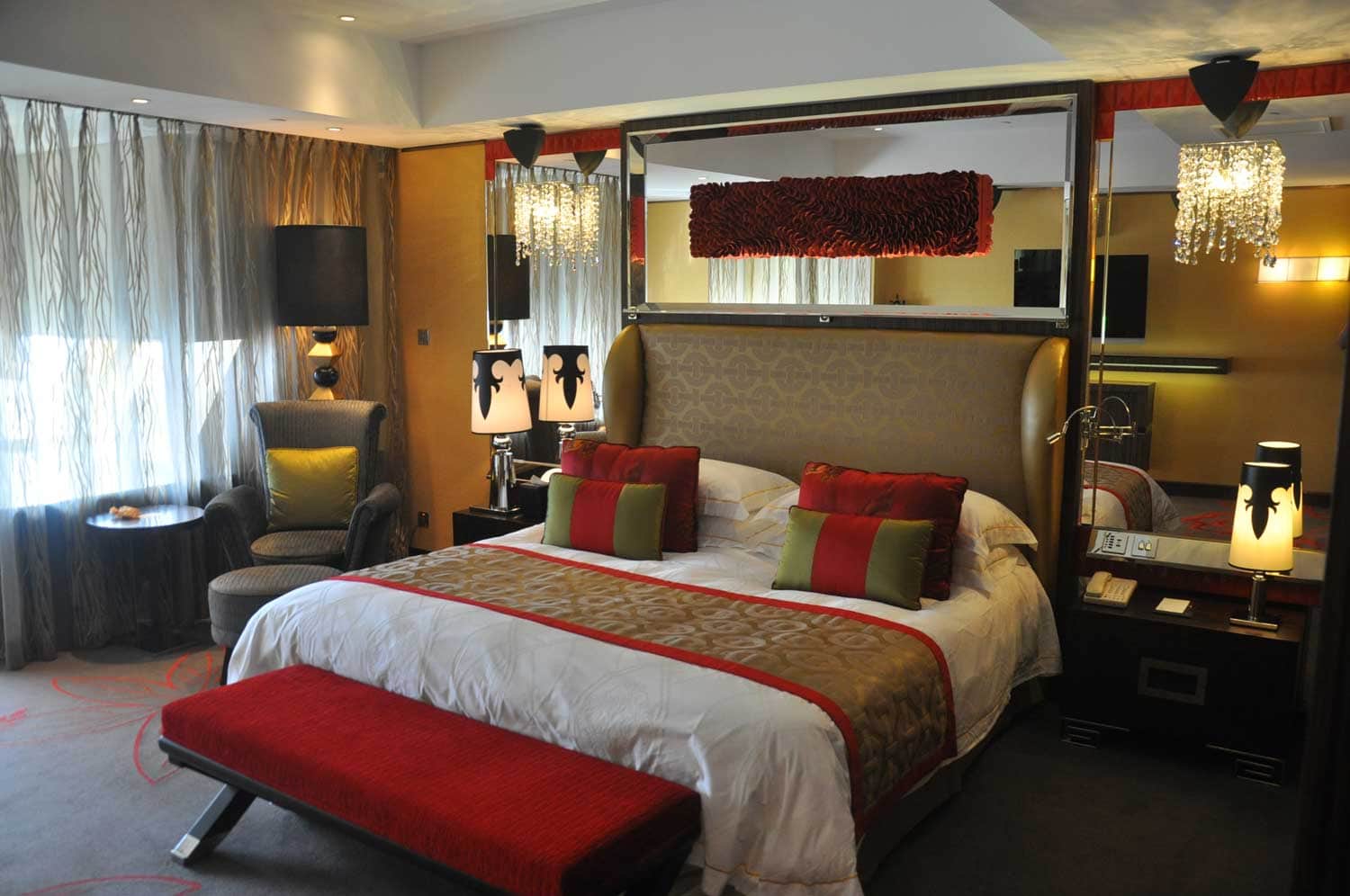 All in all, it struck me as a cheap version of a honeymoon suite, especially with the plush cushioned end bench beside the bed that can’t serve any other function but to facilitate carnal delights.  (I know that’s how we used it.). 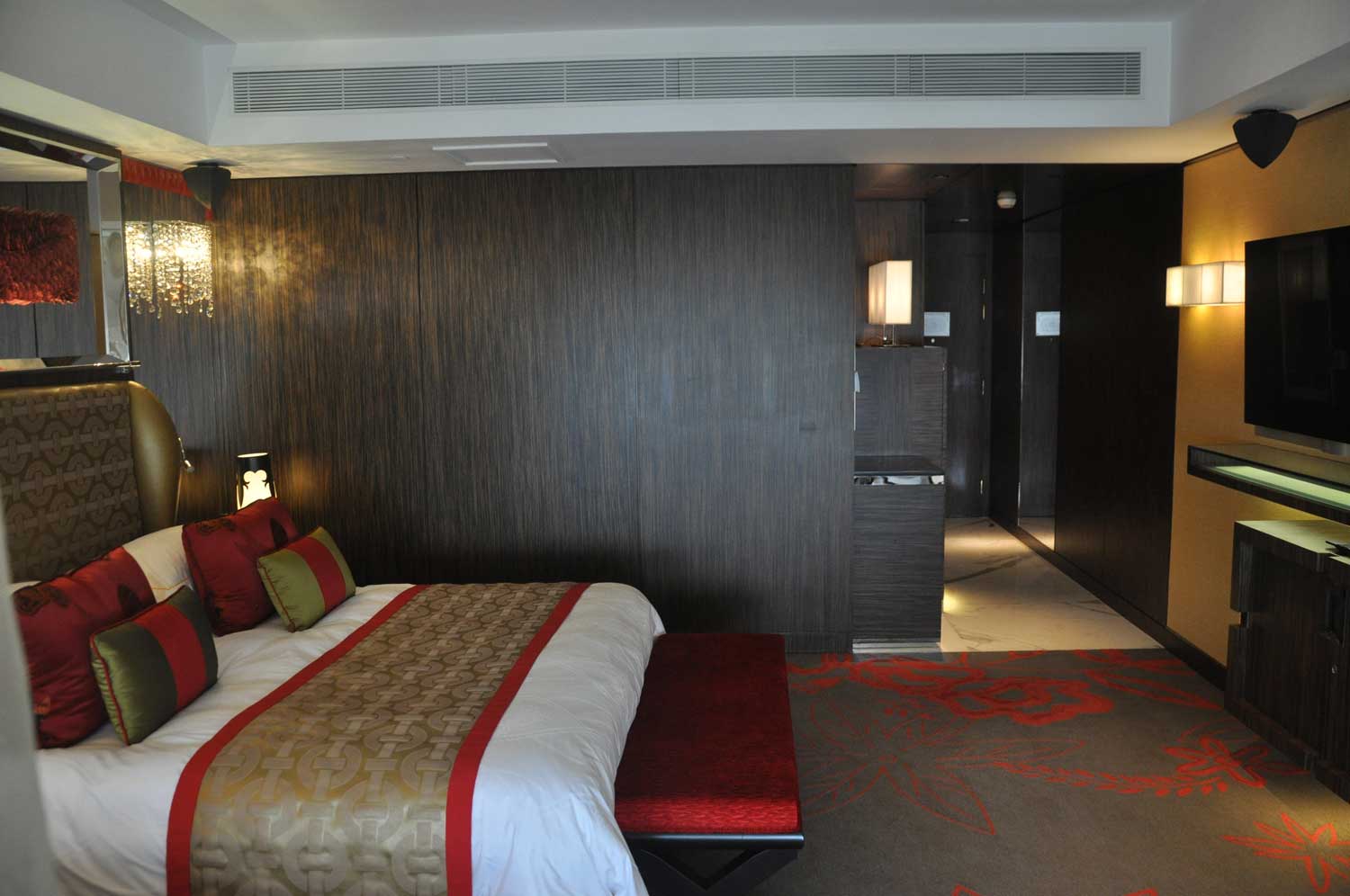 For a “grand” hotel I also wasn’t impressed by the quality of the furniture, desk, tables or chairs, which paled in comparison to the beautiful antique ones next door at the Lisboa. 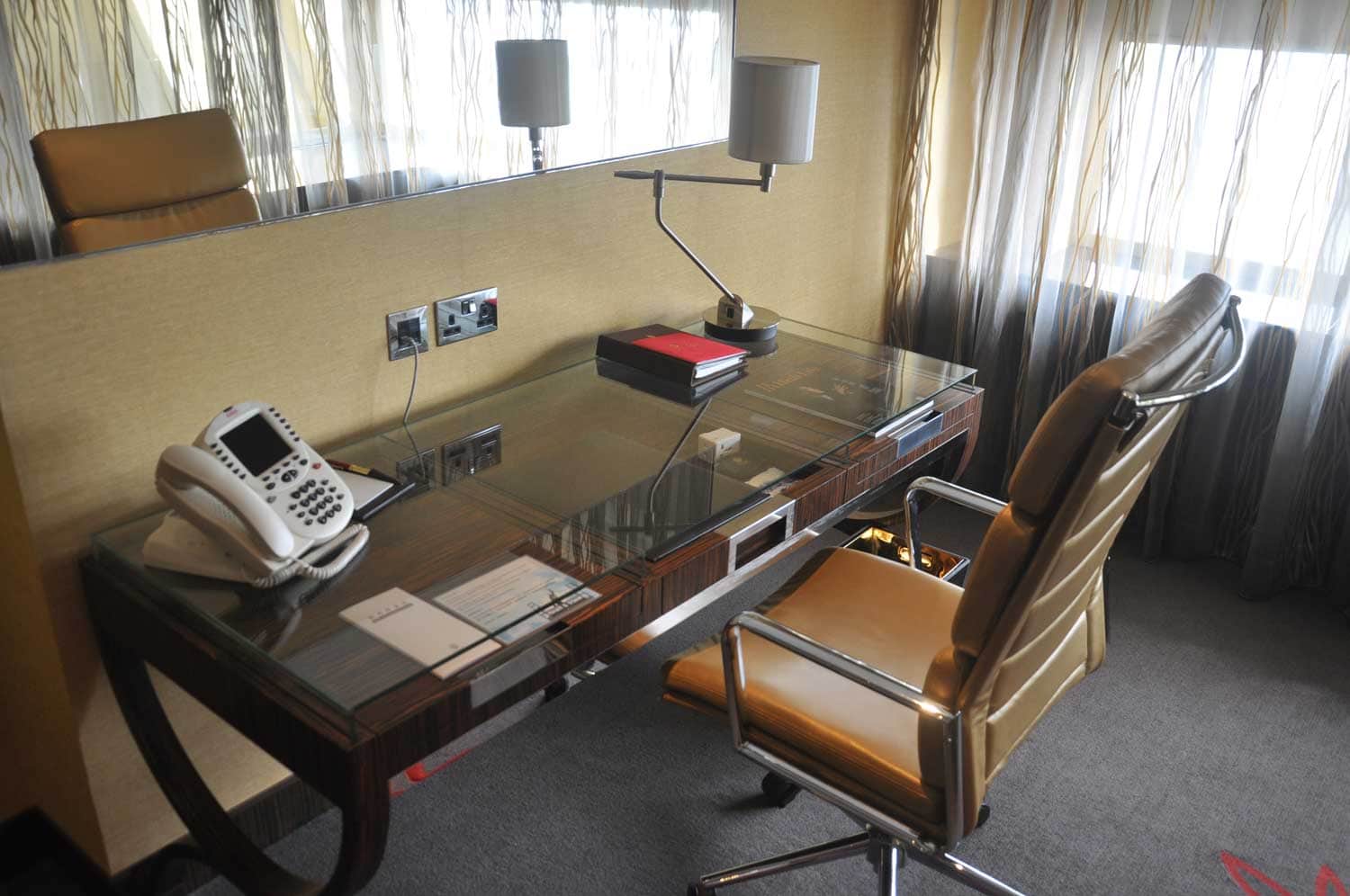 The bathroom was large and spotless, featuring a small jacuzzi bathtub, stand up shower and a lot of space to move around.  There was even a TV inside the mirror and another one in front of the toilet, which are nice design touches that more modern hotels should have. 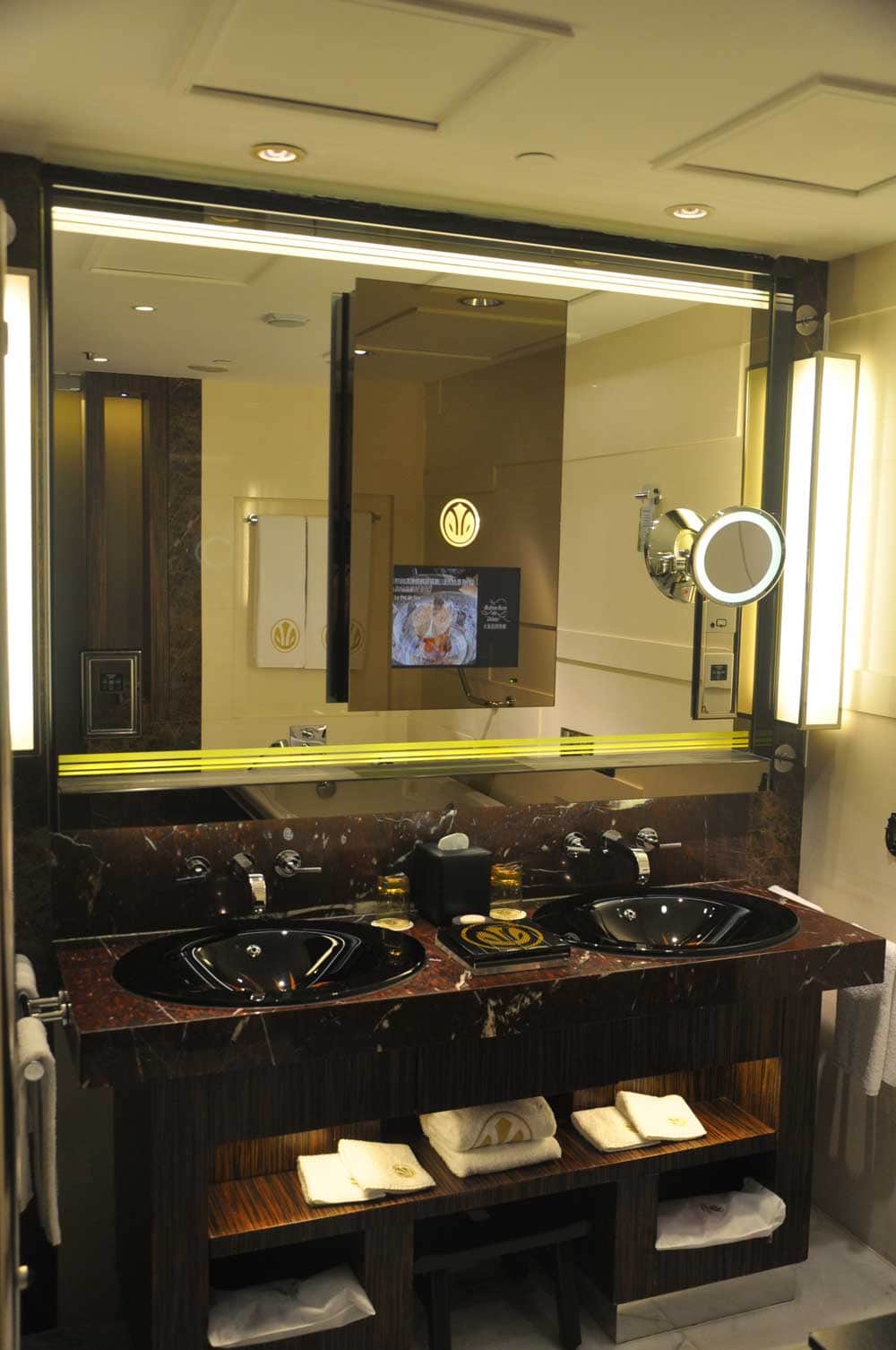 I also like it when there’s a phone next to the shitter as well, because I can’t think of better time to order room service or talk to your significant other than when you’re spraying a little mud. 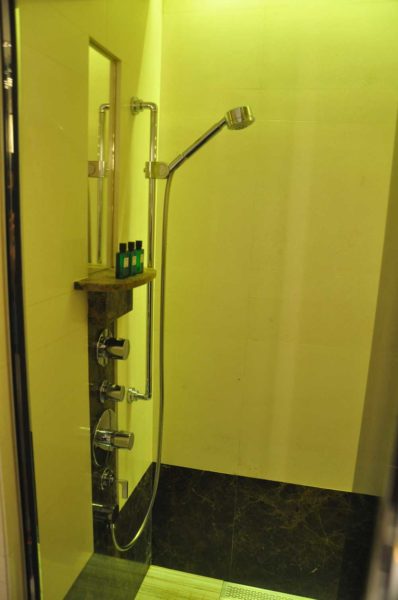 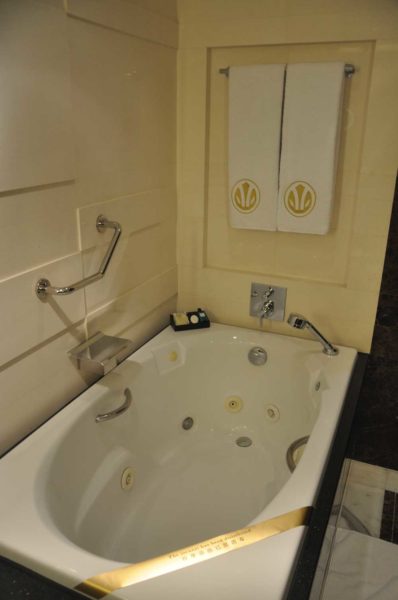 The best part of the room however was undoubtedly the view.  It was simply magnificent, facing directly out into the teeth of the Amizade Strip and all of its major properties.  When you’re up so high and can peer out and see something like that, it invariably gives you a little boost, like you’re above whatever you’re seeing, in a figurative sense.  Macau and all its greatness is under you and that is one sweet feeling to have. 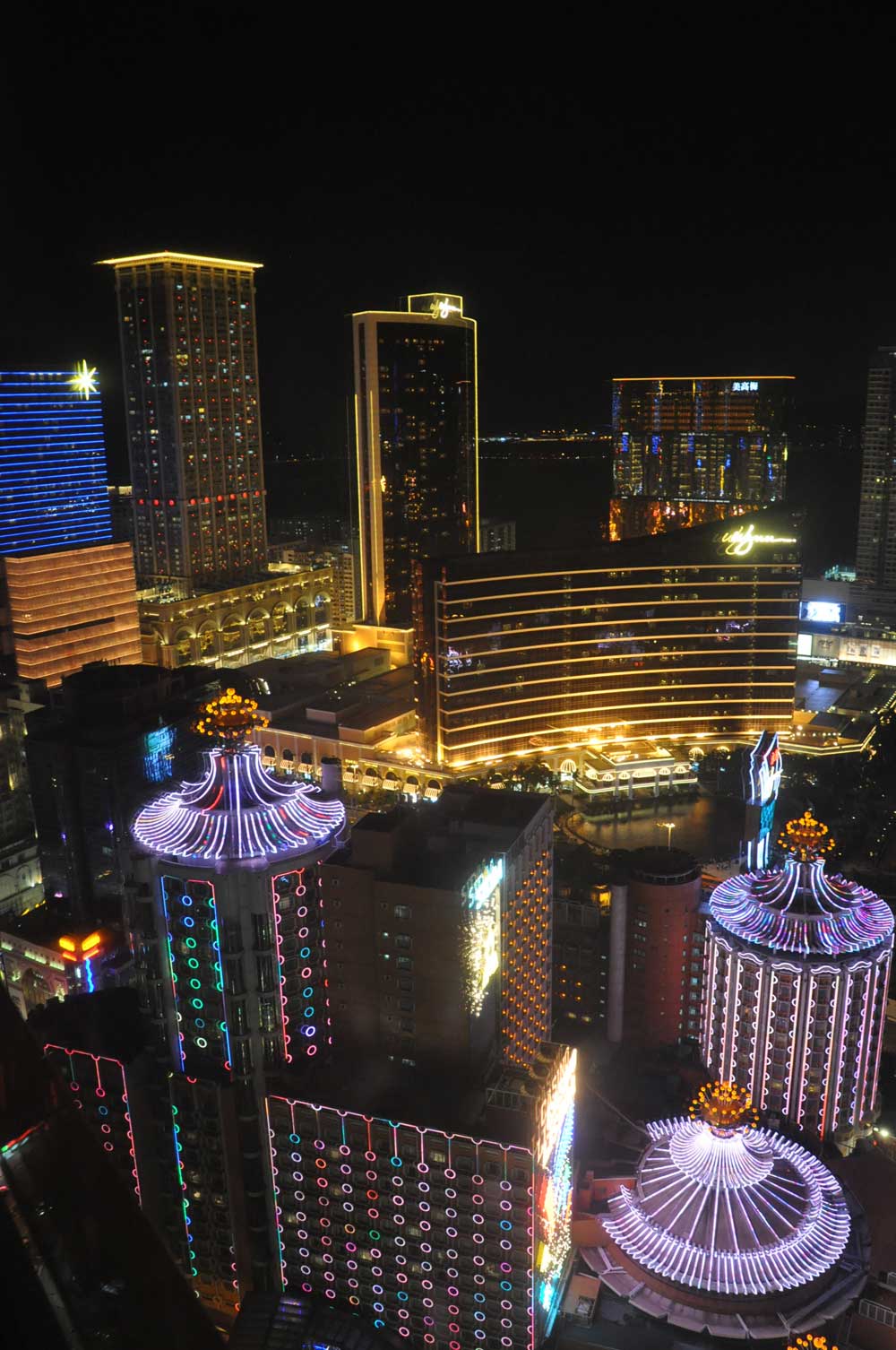 All shortcomings of the room aside, the view totally made up for it with me, and I would definitely consider staying there again because of it.  If you’re considering in a higher end property on the old Peninsula, the Grand Lisboa might be your best option, when you factor in price, location and value. 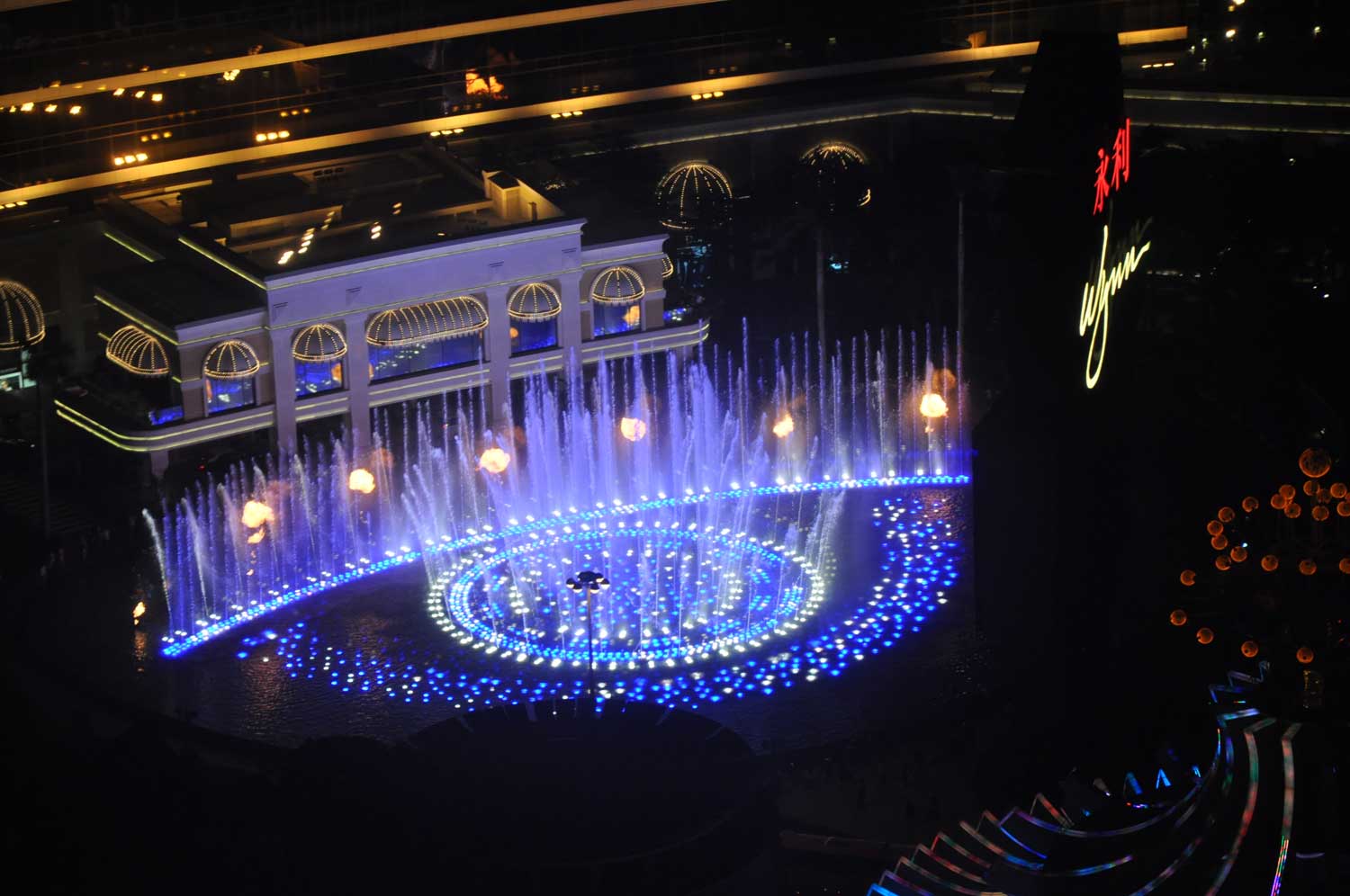 The Wynn no doubt has the better rooms and is the better hotel but it’s also $600 to $1200 Mops more, which is not an inconsequential difference.

One of my dreams before I die is to kick it for a week at the Grand Lisboa pool, sucking down Caipirinhas beside the Roman pillars and waterfalls. 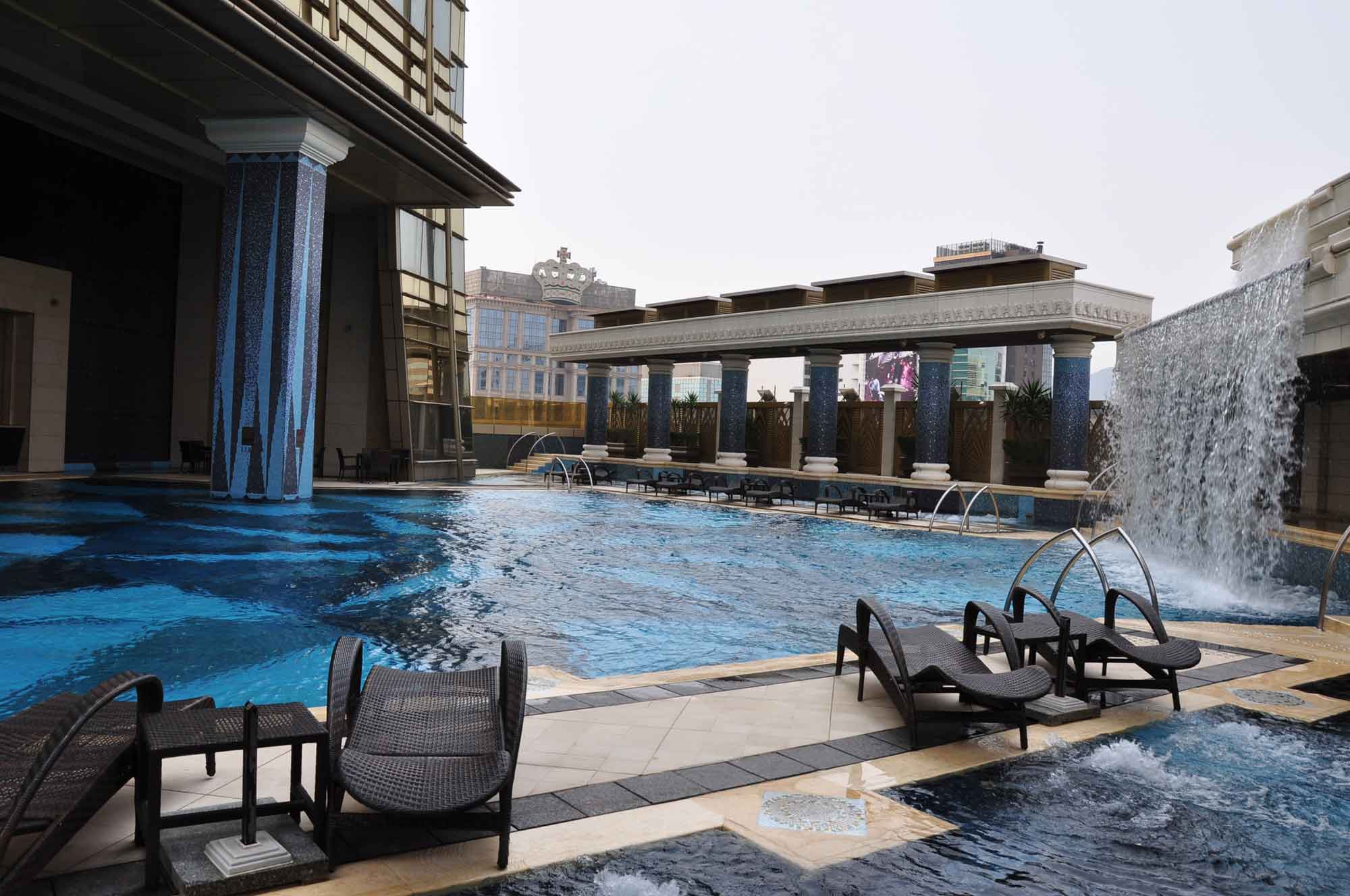 That’s when I know I’ve made it in life for sure. 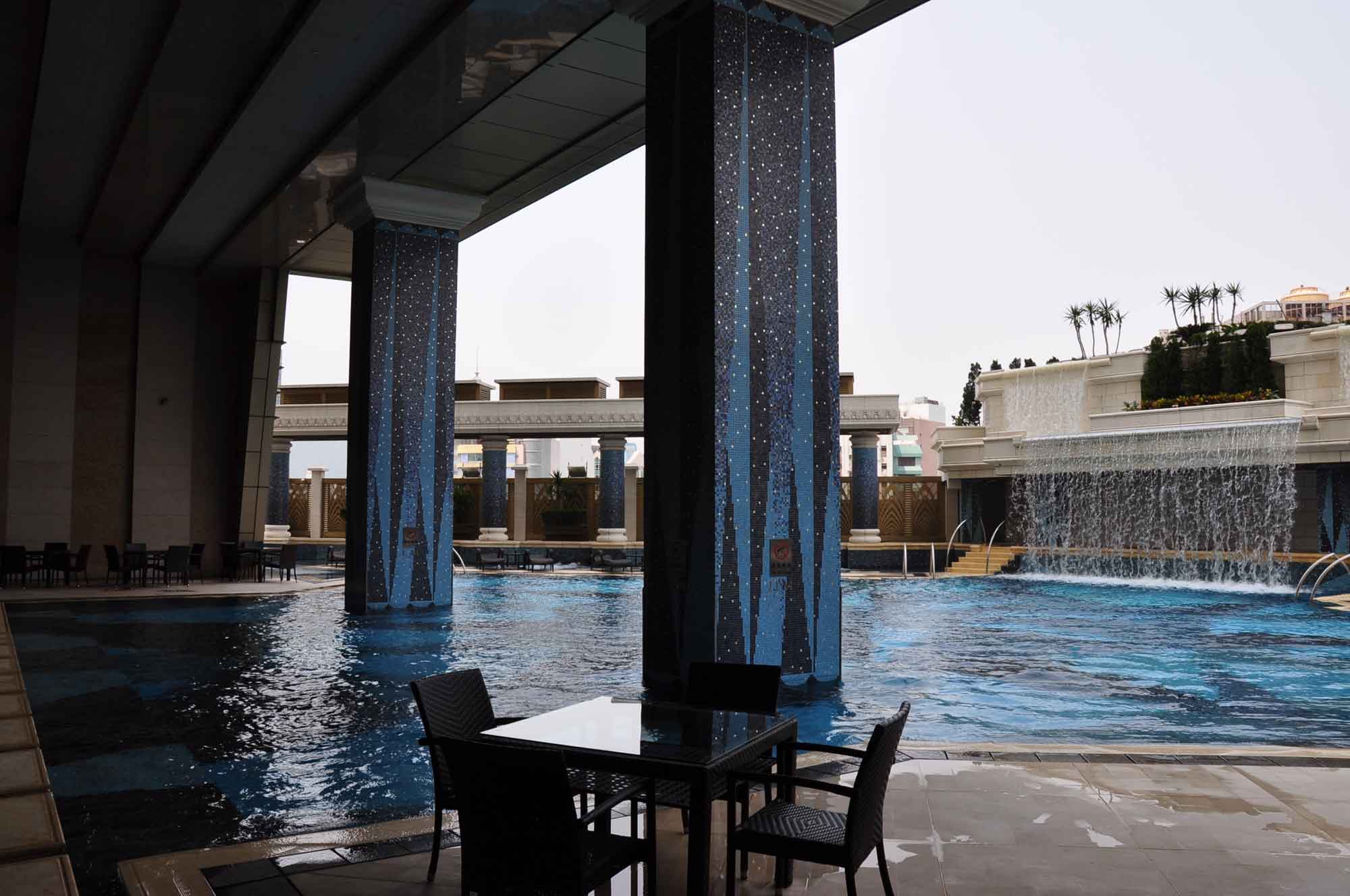 Located on the fifth floor, the pool keeps hours daily from 8 am to 10 pm.

The Grand Lisboa is a major player in the Macau dining scene, home to three restaurants with Michelin star distinction.

Robuchon Au Dome – Three star Michelin joint is long on reputation and short on substance.  I had the set lunch meal deal here a few years ago and trust me, don’t waste your time.  Apart from severe disappointment, the only other thing I felt after the meal were burning pangs of hunger.  Not only were the servings minuscule but half of them were ordinary at best.  The soup tasted like something like out of a can in a supermarket while I’ve had better tasting fish served straight from a mainland vegetable market stall.  How this place got three Michelin stars I’ll never know.  They don’t even deserve one.  As my friend said, the best part about the lunch was the sparkling water.

Located at the very top of the Grand Lisboa, one nice thing I can say about the restaurant is that is very very beautiful.

Please note that their dim sum lunches are extremely popular and reservations are almost always essential, particularly on weekends.  A touch expensive, as you’d expect, steamed dim sum is $60 to $128, while baked/deep fried varieties are $60 to $90 while sweet dessert like types are $60 to $120.

For a review of my dinner there, please click here: Trip Report III.

As for set meals, I think they only offer one at lunch, where 3 courses go for $360.

For a review of my dinner there, please click here: Casa Don Alfonso.

Noodle and Congee Corner is located on the Upper 2nd floor and stays open 24 hours.

As the name suggests, the restaurant is open 24/7, and is located on the Upper 2nd Floor.

Crystal Lounge & Deli – I’m still sickened by everything that the Crystal Lounge & Deli has become.  It used to be the only place in town to get an amazing deli sandwich, now it’s all cheap noodles and nonsense.  Like pissing on a Picasso, SJM has committed an inexcusable, indefensible act.

For the very worst dining experience you can get, Chinese fast food crap runs $75 to $95 while pathetic Hong Kong style sandwiches are $40 to $50.

The Crystal Lounge and Deli overlooks the first floor gaming level and is open 24 hours.

Located on the 5th floor, the Spa at the Grand Lisboa is open daily from 8 am to 12 am.

As for free spa amenities, the Grand Lisboa only offers a sauna for men, and a steam room for women.  Both are located on the 5th floor in the pool changing rooms.

The Crazy Paris Show takes place daily from 1:00 pm to 9:00 pm on the main casino floor.  A Macau mainstay for decades, it’s a cabaret style performance featuring scantily clad foreign beauties, many of whom could be considered goddesses.

Exquisite and exemplary examples of the female form, they entertain in a multitude of ways, with everything from pole dancing to Brazilian can can, hoop work to other more risque endeavors.  Best of all, the entire show is free.

The main bar at Grand Lisboa is located in the casino where the Crazy Paris Show takes place.  The only other place to drink is at the small Lotus Lounge, located in the lobby.

There aren’t many negative things to report about the Grand Lisboa. There’s exceptional dining, one beautiful pool and lobby, as well as an unforgettable and unique building design. 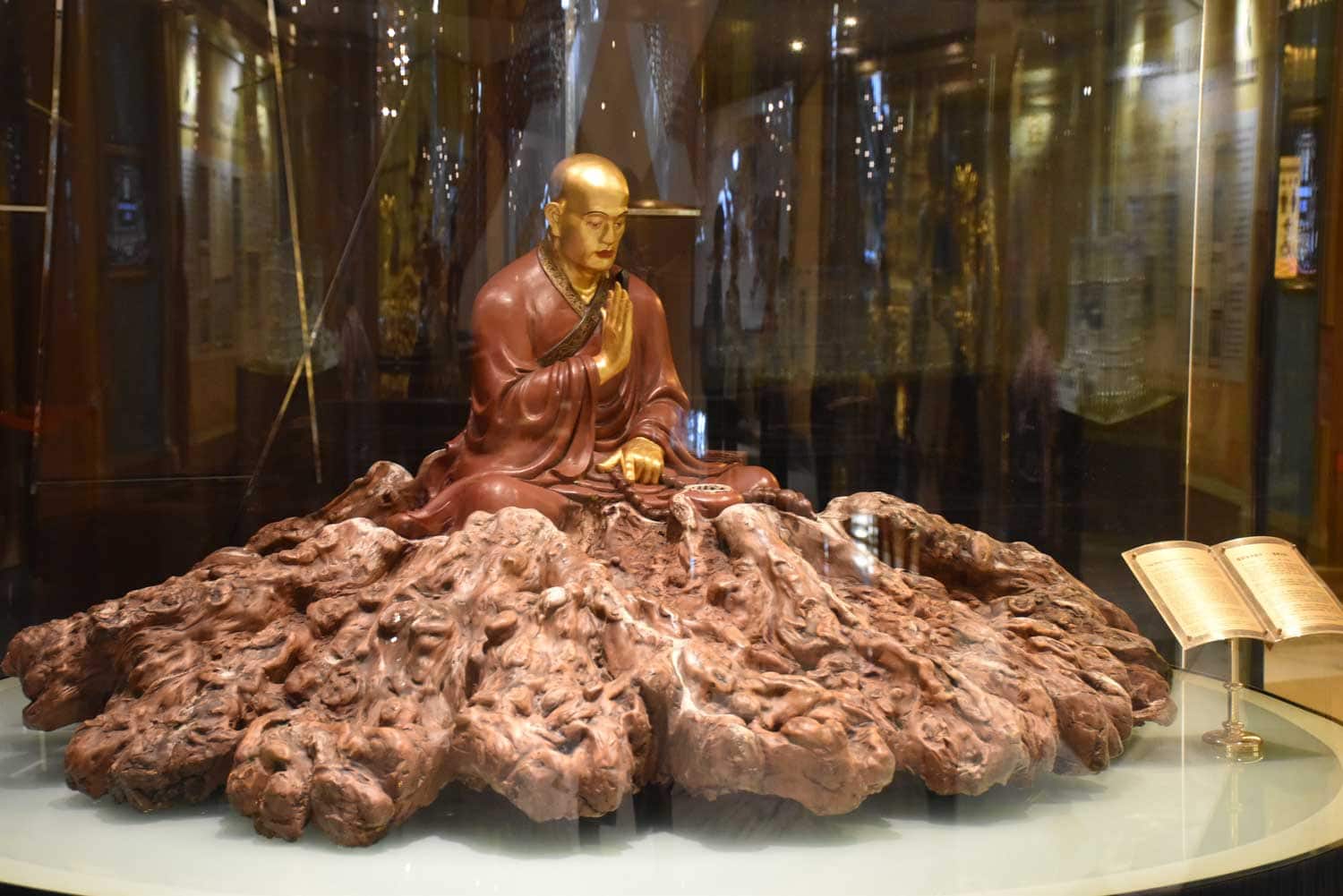 It clearly delivers on its billing as a luxurious five star hotel, probably only trailing the Wynn Macau in this part of town. 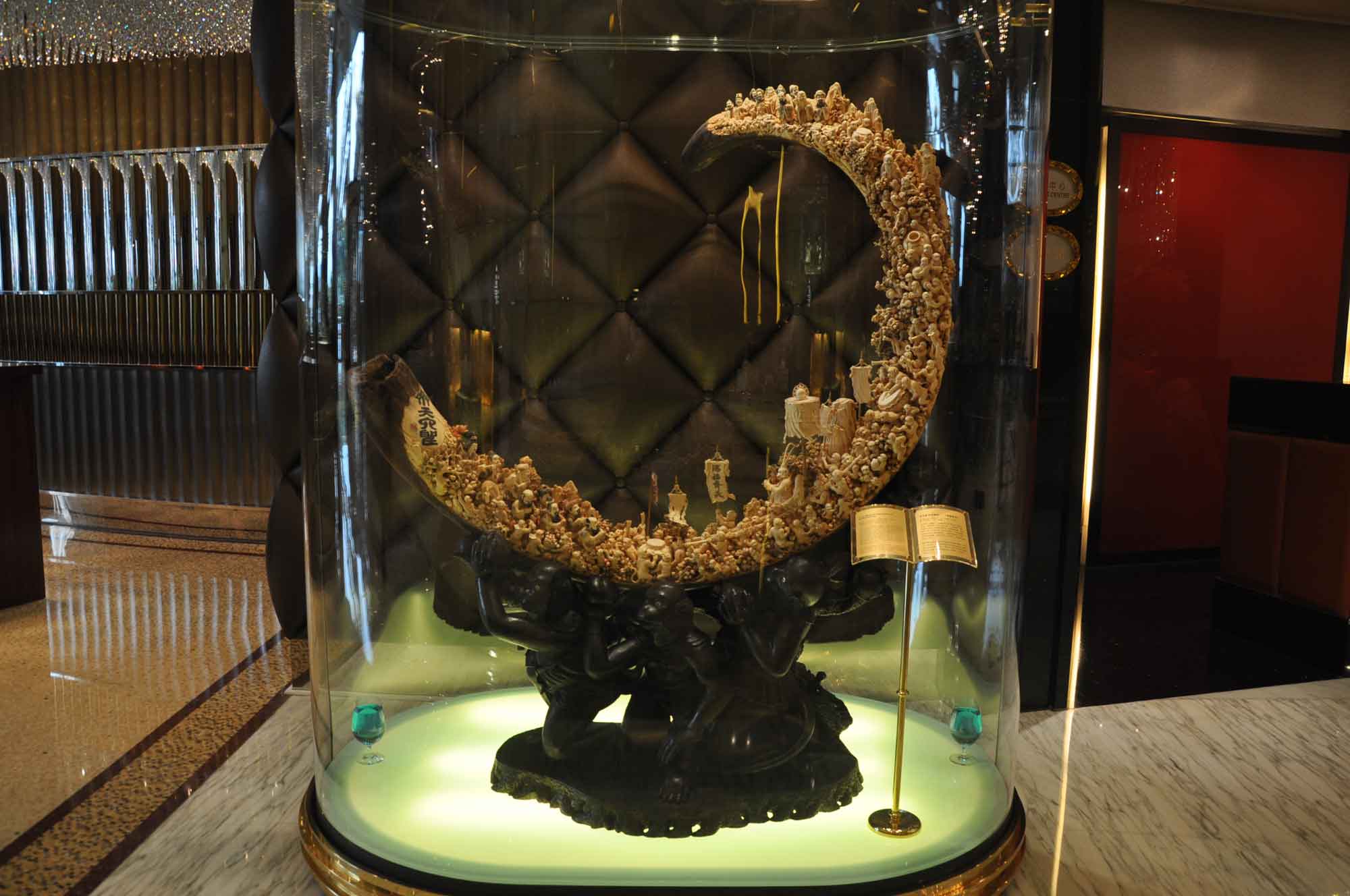 As for the casino, it gets my vote as the best one on the old Peninsula.  With excellent minimums, good game selection and the best free entertainment around, it puts the Wynn, MGM and Sands Macao to shame. 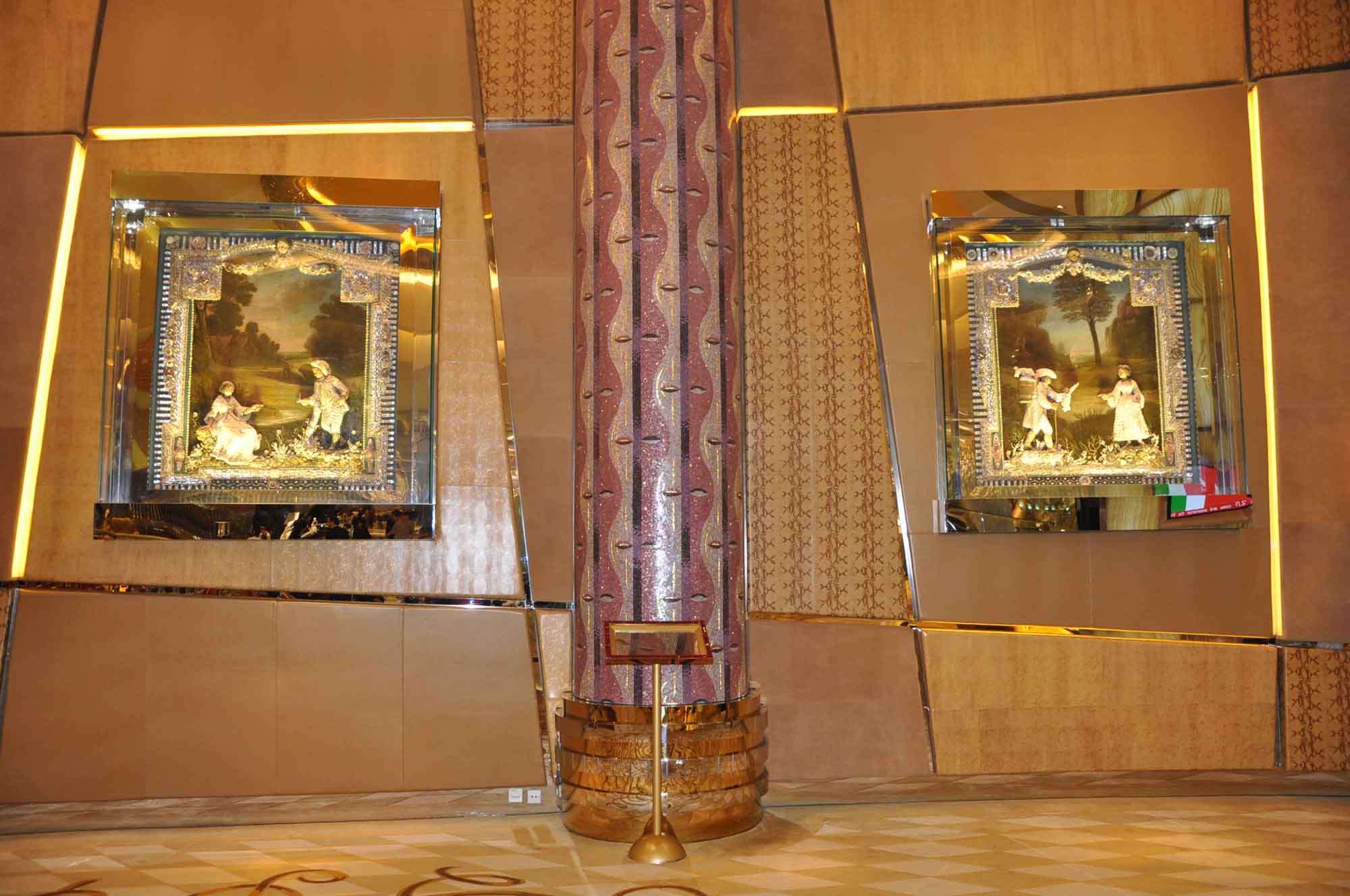 You’ve got to love all the art in the lobby as well! 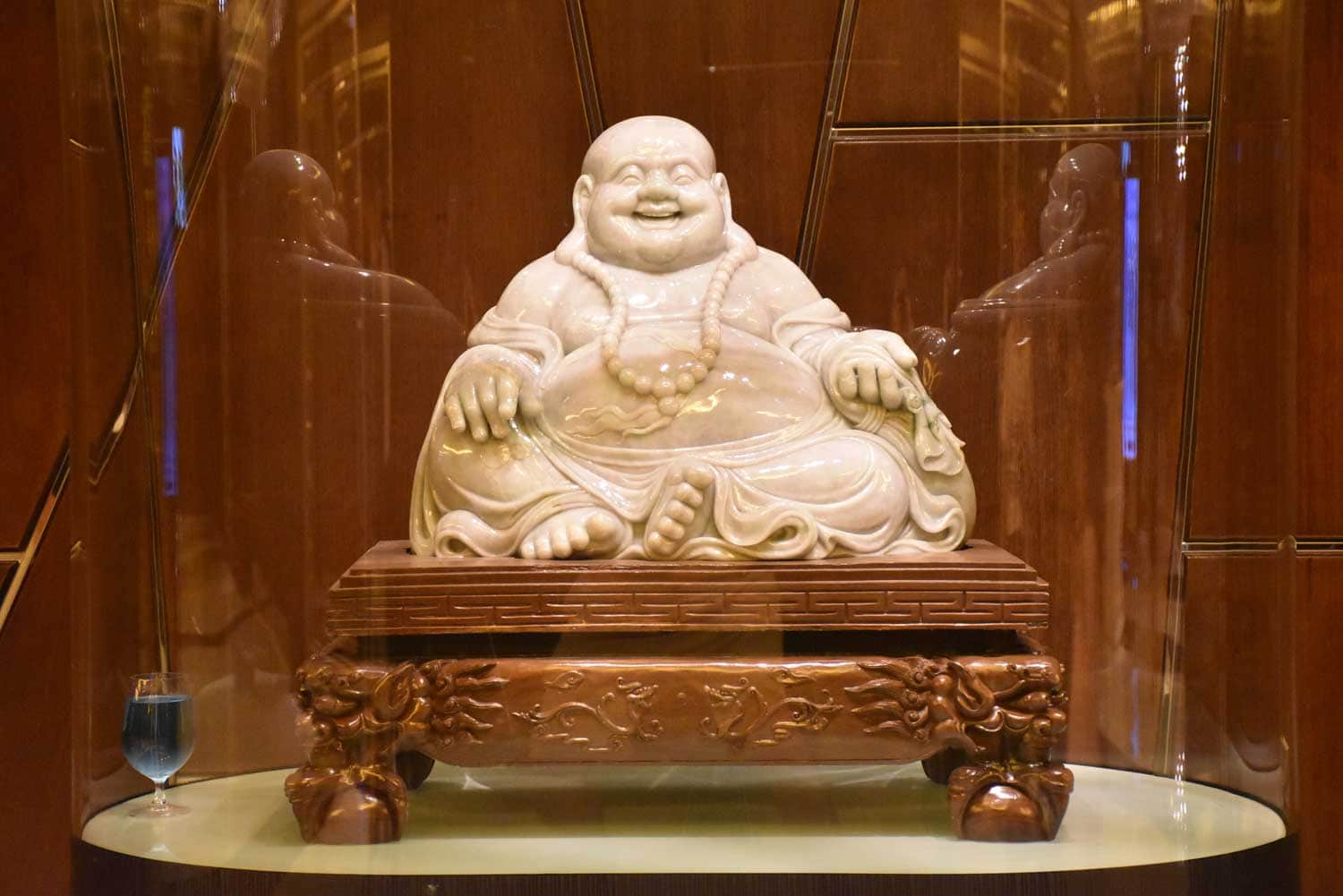 The Grand Lisboa has a fantastic location, just off of San Ma Lo and within walking distance to Senado Square and the Historic Quarter.