If the Lisboa walls could talk, what a tale its pink floral prints could tell.  Most of the story would probably revolve around two lovers losing it in the deep of night, because if a building in Macau has seen more sex over the past 50 years than the Lisboa, I’d love to know where it is.

First unveiled in 1970, Stanley Ho’s old flagship hotel was for many years not only the most famous casino in Macau, but in all of Asia.  A precursor to the massive properties that now dominate Cotai, it’s a fairly large complex composed of two hotel wings, two casinos, four floors of shopping and 927 rooms.

The similarities probably end there though, and it’s entirely fair to point out that the Lisboa’s lost quite a bit of luster the past two decades.  Nowadays it’s known as an excellent budget option on the Amizade Strip, where better $1000 rooms cannot be found.

I don’t usually describe casinos and what they look like, but the one at the Lisboa definitely deserves some mention.  It’s a throwback to another time, when casino operators paid no mind to modern comforts like service, space and lighting.   Dimly lit and a little sinister, 28 tables are packed onto a circular gaming floor that resembles a dark round cage, the short squat pillars acting as thick square bars.

A dozen dragons descend from the ceiling grasping orbs of glowing light, their gross reptilian bodies grotesquely conforming to the wicked contours of the wall.  The ceiling is a macabre amalgamation of unknown symbols and designs, which convey no apparent meaning and can hardly be made out.  There’s no other casino in Macau that’s remotely like it, and you should definitely stop by to check it out, even if you don’t intend to gamble.

Minimums at the Lisboa are fairly low, with most games available for $200 or $300.  Five years ago they had a much better game selection, but Fan Tan, Roulette, Banking Three Card Baccarat at Fish Prawn Crab are no longer available, the latter finished city wide.  The $20 Live Baccarat that used to be on the 3rd floor also bit the dust, leaving just slots and electronic versions of Sic Bo ($30) and Roulette ($40) available on the first floor.

The Lisboa probably has more VIP tables than public ones.  The third and fourth floors are the exclusive domain of the junkets, with a bunch of different companies in business up there.  They definitely need to pool their money together for a remodel, because everything up there looks straight out of a Remington Steele episode.  There’s horrible carpet on the floor and the wood panel on the walls had to have came from the side of an 80’s station wagon.  Most everything is done up in gold but the designs are so dated that it projects nothing but low class poor taste.

The Lisboa is the only casino in Macau where players can bank playing Pai Gow.

Pai Gow – Players retain the option to bank if they so desire, and the odds say you should when given the chance.  Assuming you set your tiles the house way, the house edge when banking against one player is only 0.53%, far lower than when not banking (2.44%).  Minimum bet is $200.

The Lisboa also has another casino called the Crystal Palace, which is accessible via Avenue D’Amizade.  Home to 40 tables, it’s one of the cheapest places to play in town, with plenty of $100 and $200 minimums.

Commission Free Baccarat – Minimums of only $100.

EC Card – The EC card is the Lisboa’s player card, used to accumulate points via gaming that can be redeemed for gifts and other comps later on.

Elite Card – Holders of the Elite Card can join five different cash back rolling programs, as listed below.

For those enrolled in any program above, free Lisboa rooms can be had with a $50,000 buy on weekdays, while it takes $70,000 on Fridays and Saturdays.  Alternatively, players can take $880 from their cash back percentage to purchase the room outright.

The Lisboa also offers a smaller buy in program that only requires $10,000, and returns 0.9% cash back.

Fans of the Lisboa 20 years ago probably wouldn’t recognize it’s turned into today. In the height of the “Troubles” during the late 90’s when Triad violence was spiraling out of control, armed cops patrolled every entrance while the city’s most notorious gangster “Broken Tooth” Wan Kuok Koi held court inside, styling in suites and thousand dollar suits, plotting out his next move (and movies, for that matter).

Every afternoon around 2:00 pm, the eye candy took over the lobby, the various imported labour ready to catwalk the night away.  The front desk always greeted them warmly, both familiar and fine with their presence, knowing full well the money they brought in. The tall and very white Russian talent set their price at 1000 Mops way back when, which is barely a Baccarat bet nowadays for high rollers, but sweet sweet coin 20 years ago when Macau was still unbelievably cheap.

Elsewhere in the shopping quarter, the exclusive gentleman’s bar Club de Savoy plied its trade beside the bumper cars and Merry Go Rounds of Children’s World, a crass juxtaposition of families and foulness, the likes of which you won’t be seeing on the Cotai Strip anytime soon.

As for Broken Tooth, he would infamously meet his end at Lisboa in 1998, arrested in the 456 Restaurant hours after a bomb targeting the Chief of Police exploded in his car. Legend has it his 14k gang had previously murdered a cop and top government official, which just goes to show how crazy the violence had become. The best line from that era though? The tourist office assuring visitors it was still safe to come to Macau, since the triad members were all professional killers who never missed their mark!

So yeah, the Lisboa (and Macau for that matter) was a totally different place pre-handover, the Portuguese clearly having lost the plot in their later years.

As for the Lisboa today, it’s totally cleaned up, no doubt the most legit it’s been in its 50 year history. In quite the role reversal, culture and class are clearly taking precedence now, in the form of all the art on display, the majority of which is in the main lobby. 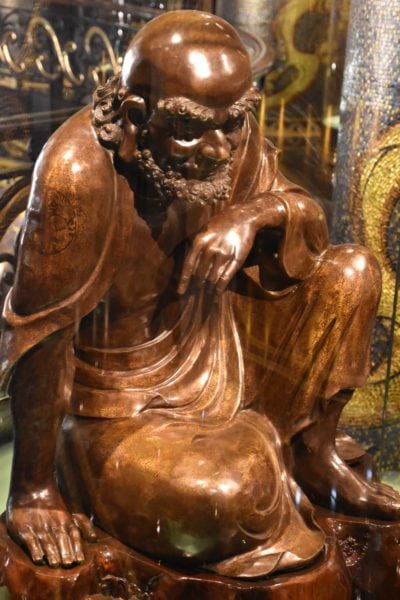 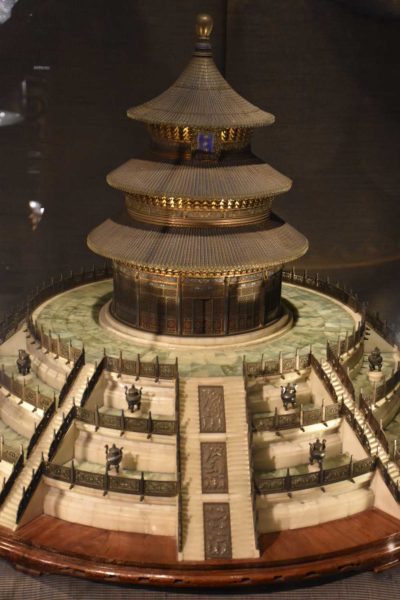 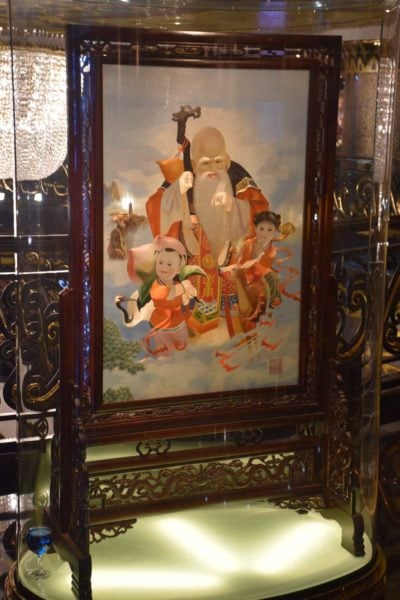 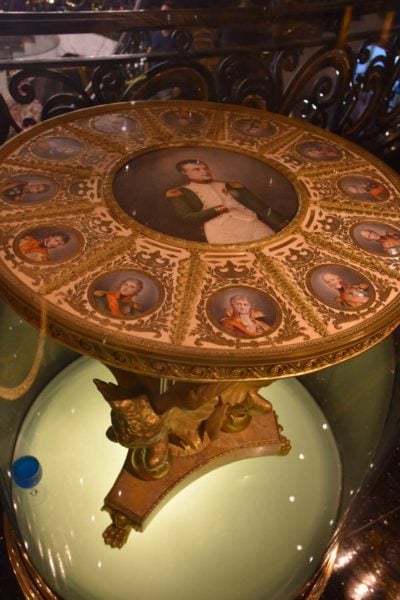 All of the pieces come courtesy of Stanley Ho’s personal collection, and when taken in totality, far outclasses what’s usually shown at the Macau Museum of Art. 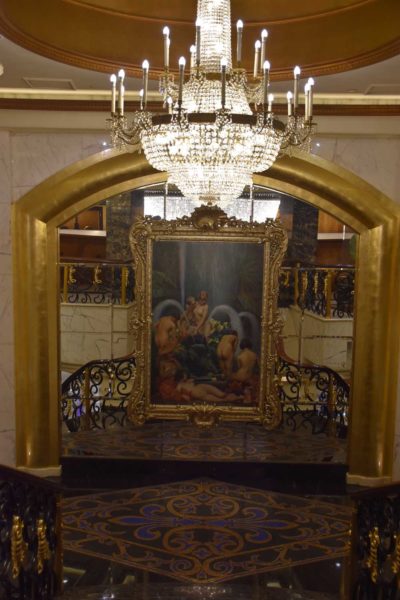 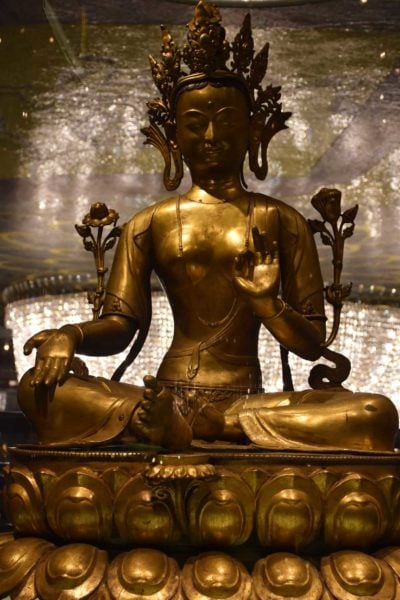 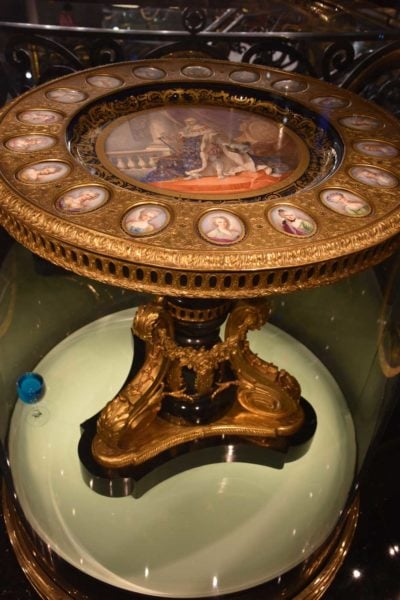 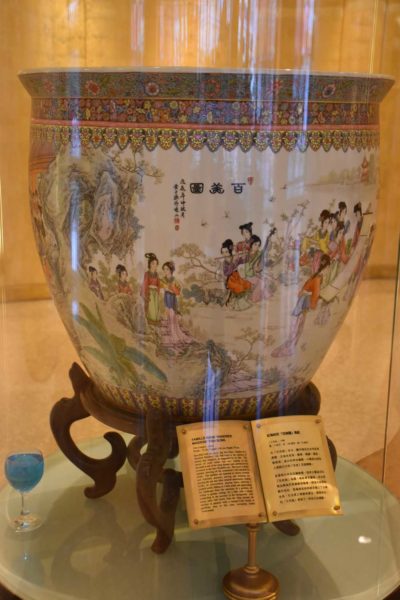 As for the Lisboa rooms, it might be wise to skip their East Wing Standards, which look a little sketchy from the limited pictures on the website. A much better option is to stay in the Royal Tower, which I had the pleasure of doing way back in 2012, as part of Trip Report II. 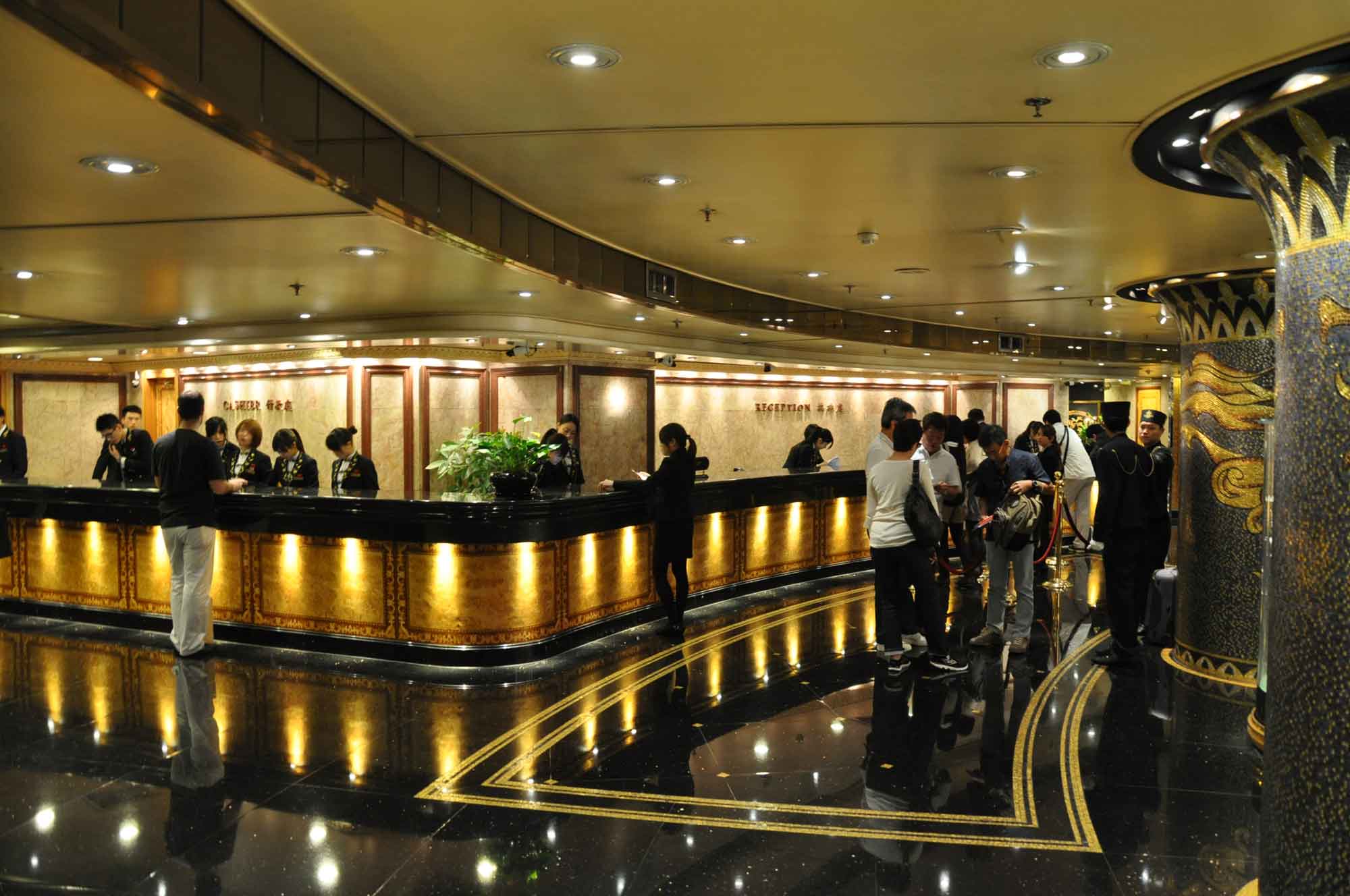 Current room rates shown are in Macau Mops, inclusive of all tax and service charges.

An added perk for guests staying at the Lisboa is that everything in the mini bar is free, as is the internet. 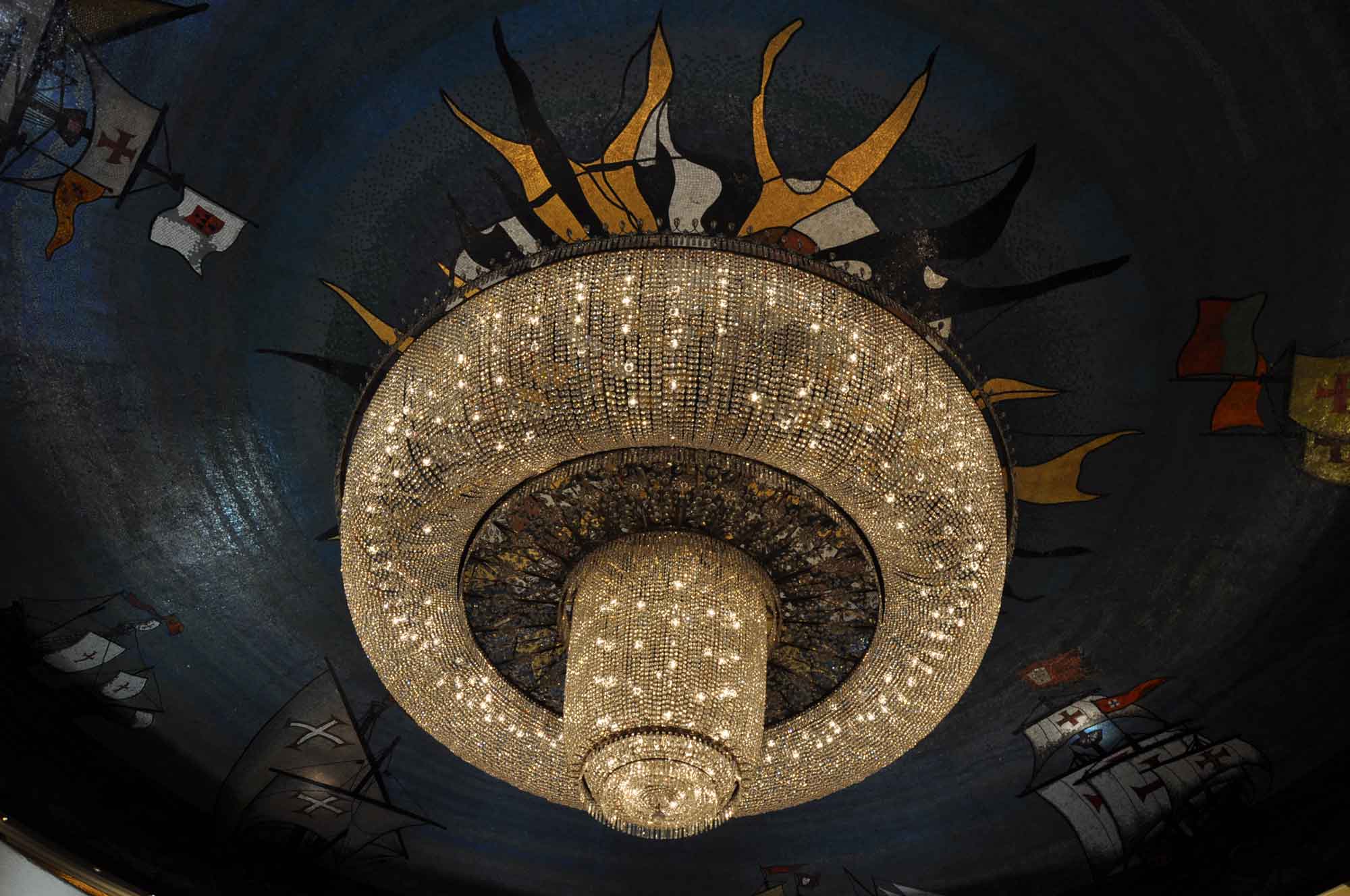 The Lisboa pool is completely inadequate, seeing that the hotel has 972 rooms. 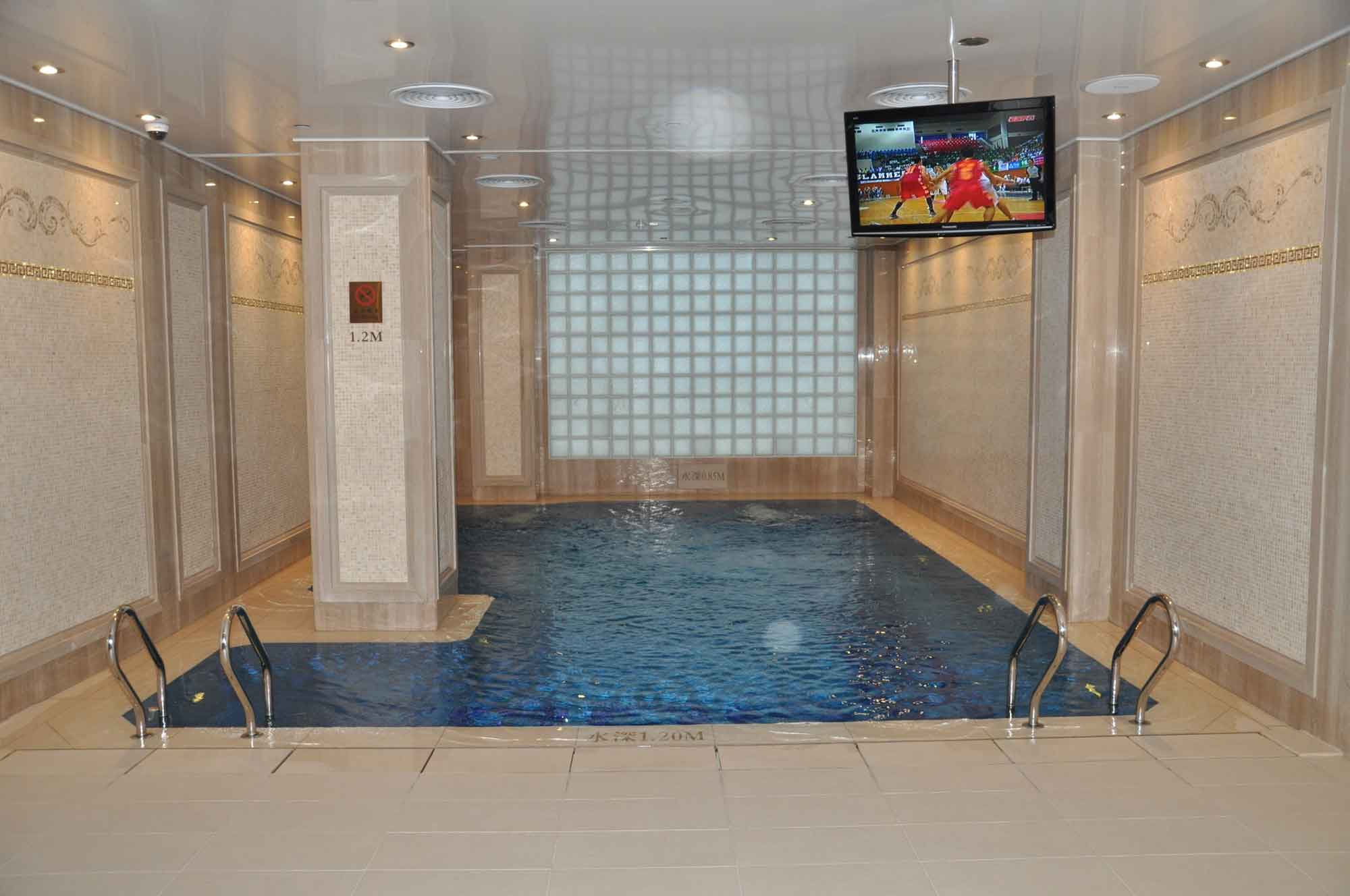 Move along people, there’s nothing to see here.

The Lisboa fitness center is just as disappointing as the pool, especially if you’re looking to lift. Extremely small, it only offers free weights and four heavy apparatus that primarily work the lower body.

There are more than enough cardio machines though, and you’ll be okay if your workout focuses on that.

Among the 11 or so restaurants at the Lisboa, these 5 are designated as signature eateries.

Guincho a Galera – Guincho A Galera’s goal is to take Portuguese dining and elevate it to the next level (aka the ultra expensive.)  While they’ve got the pricey part down (naturally), the food leaves a lot to be desired, and they still don’t have a Michelin star.  And after the dinner I had there, I doubt they ever will.

For a review of my meal there, please click here: Trip Report II

New Furusato – New Furusato deals in Japanese fare and a whole lot of set meals.  Lunch sets runs between $380 and $480 and individually feature one of nigri sushi, sashimi or teppanyaki, while a ton of different Kaiseki sets are between $550 and $1100.  I don’t know what Kaiseki is exactly, but Vegetable Kaiseki seems to the most common kind ($550) and then it gets progressively more expensive as you move from Inabikaei Chicken ($650) to US Prime Beef Kaiseki ($780) to Teppanyaki Kaiseki ($1020) and finally Furusato Kaiseki ($1100).

Located on the 2nd floor in the Lisboa Tower, New Furusato has the same hours as Guincho a Galera.

For a review of my lunch there, please click here: Tim’s Kitchen

Noite e Dia Cafe – Located on the lobby level of the Lisboa Tower, Noite e Dia Cafe does food in all styles, International and Asian alike.  Three different breakfast sets run $88 and $160 while individual selections like eggs, real, yogurt and french toast are $38 to $72.  You can also try a breakfast buffet for only $140 (adults) and $120 (children) while another special menu offers more sophisticated morning favourites for $60 to $198.

Gallery Lounge looks like it’s part of Puertos de Sol on the 3rd floor, but it’s actually its own establishment.  Half bar and half restaurant, the food menu consists of typical pub and snack fare, with prices between $38 and $128.  A few choices include the Lisboa Club Sandwich ($80), Ham and Cheese Sandwich ($70), Steak Hamburger ($70), Hot Dog ($55) and Cheese Platter ($108.) 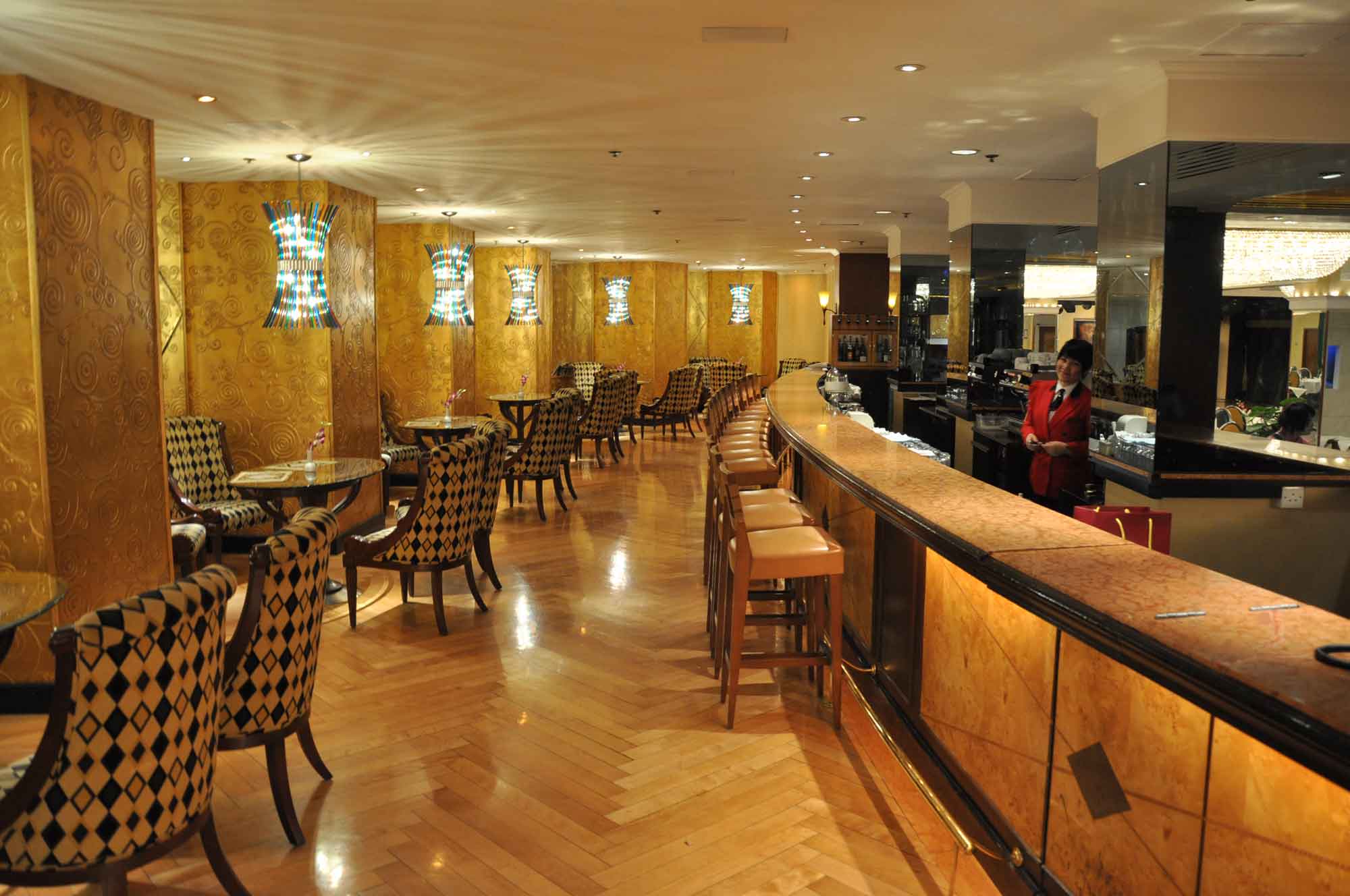 Due to some scandal at the Grand Lisboa involving a prostitution ring and a high ranking manager, the Lisboa shopping arcade has been cleaned up. 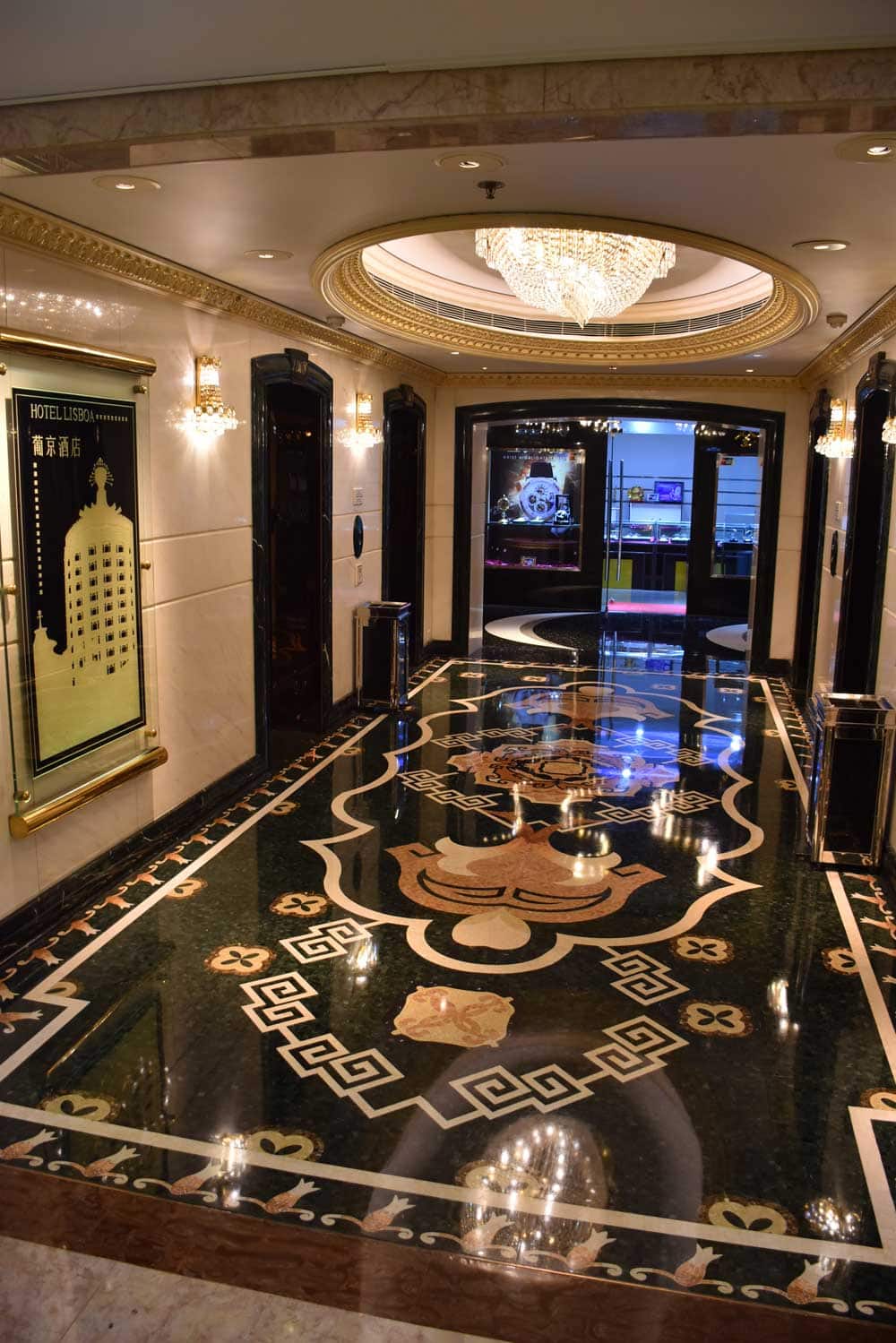 All of the hot mainland hookers have been forced out, leaving the Lisboa mall a shell of its former self. 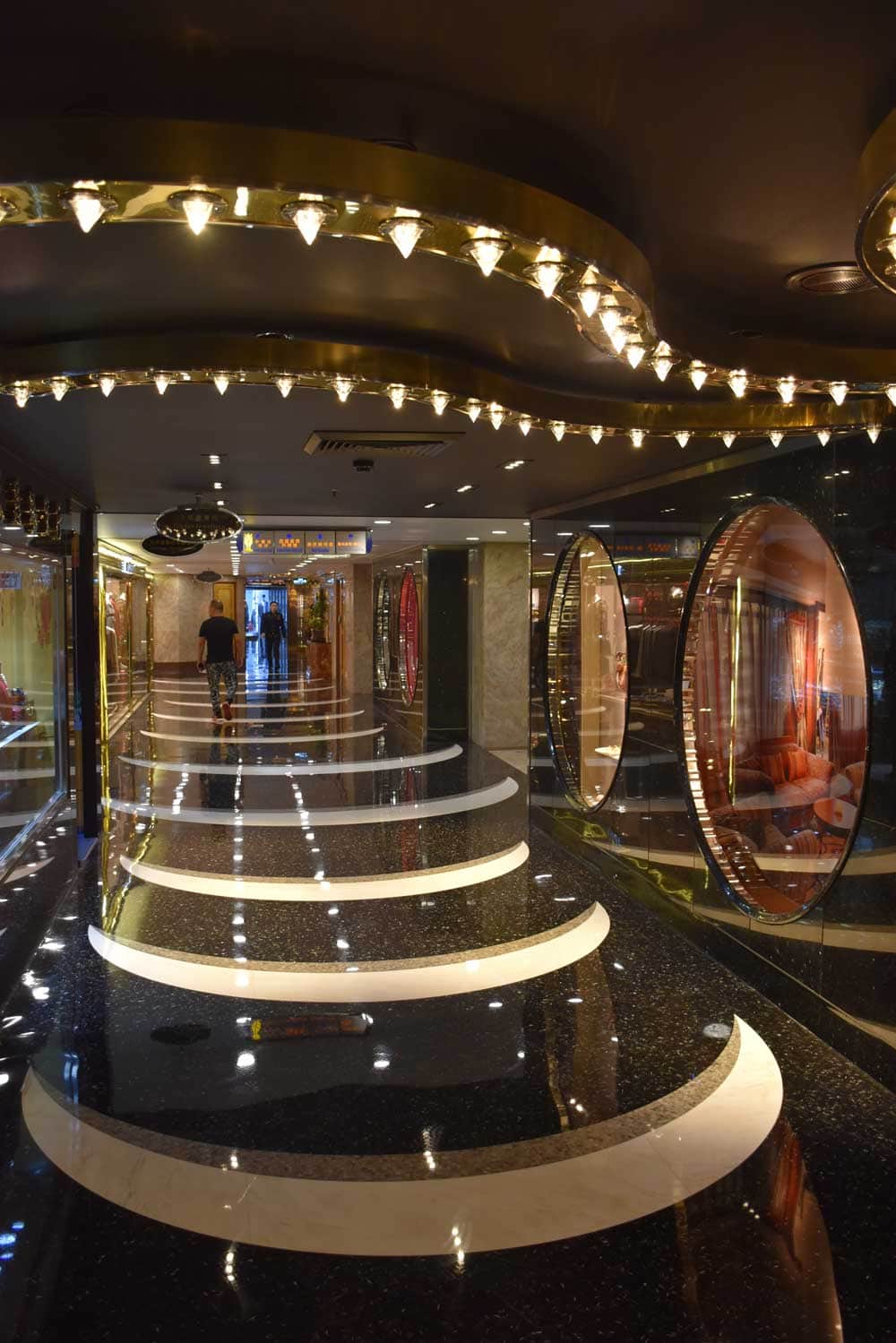 The Lisboa has fallen hard and fast from where it was circa 1970 to 2005, when it was THE most important hotel/casino in town, but so be it.  It can still flourish (and is), as an overqualified budget option featuring a ton of great shopping, cool retro 1970 rooms, and all that art and history.  Comparing it to holes like the President and Fortuna is really no comparison and all, and I’d give it serious consideration if I were you. 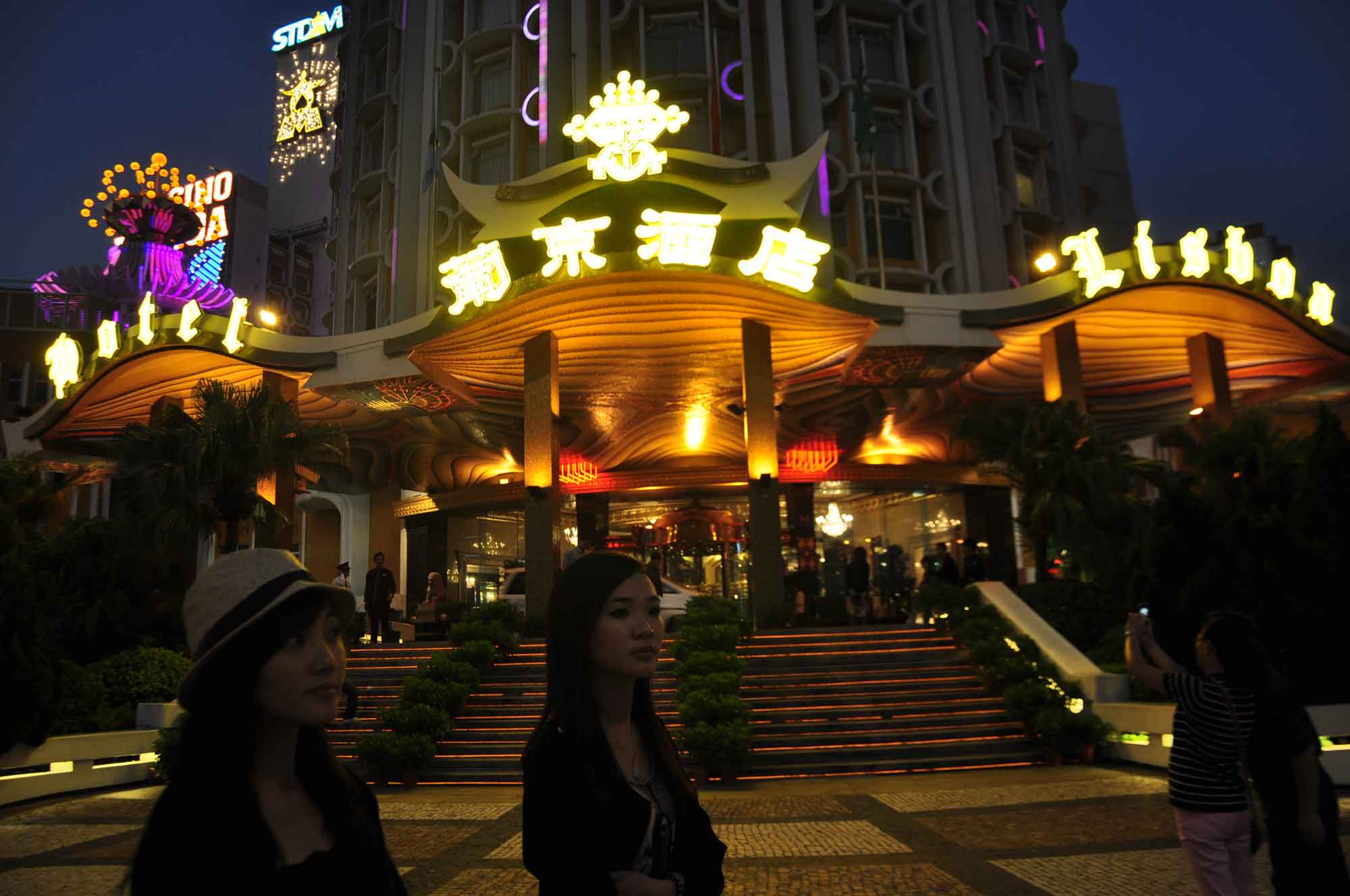 As for the casino, it’s becoming more and more mainstream each year that passes by. A number of games that used to be unique to the Lisboa have disappeared, as have the low limits (i.e. no more $100 tables). About the only noteworthy option still remaining is the ability to bank in Pai Gow, an option I wouldn’t bank on continuing much longer either.

It’s hard to find a hotel in Macau that has a better location than the Lisboa.