One of the oldest hotels on the Amizade Strip, Landmark opened a lifetime ago in 1997, while its casino commenced operations in 2003.  While it would be easy to say that they’ve both seen better days, I don’t think that’s the case.  The casino has always been one of the better ones in town, while the hotel remains in excellent condition, and far more comprehensive than most newer properties that invariably charge a lot more.

Originally known as Pharaoh’s Palace, the New Orient Landmark casino used to be one of the best looking ones in town.  Unfortunately, all of the cool Egyptian motifs have been removed, including the imposing statue of the King and Queen that used to tower over the gaming floor.  Even though it looks a lot more ordinary now, the Landmark remains one of the better casinos in Macau, simply because it offers more than just Baccarat, while also keeping the minimums low.

Why casinos need 40 tables of the same game is beyond me, but I guess that’s why I’m here on my couch writing reviews and not in Cotai Strip boardroom meetings laying out the future of the industry and where I’m taking it.  In any event, it would be very refreshing if more casinos followed Landmark’s lead, because the usual here in Macau is Baccarat or bust, which gets very boring after awhile.

A very comfortable casino, there’s plenty of room in and around the 52 tables, which are neatly grouped according to game and adequately spaced.  Minimums are excellent with everything available for $100 or $200 while there are no longer any slots or electronic games. 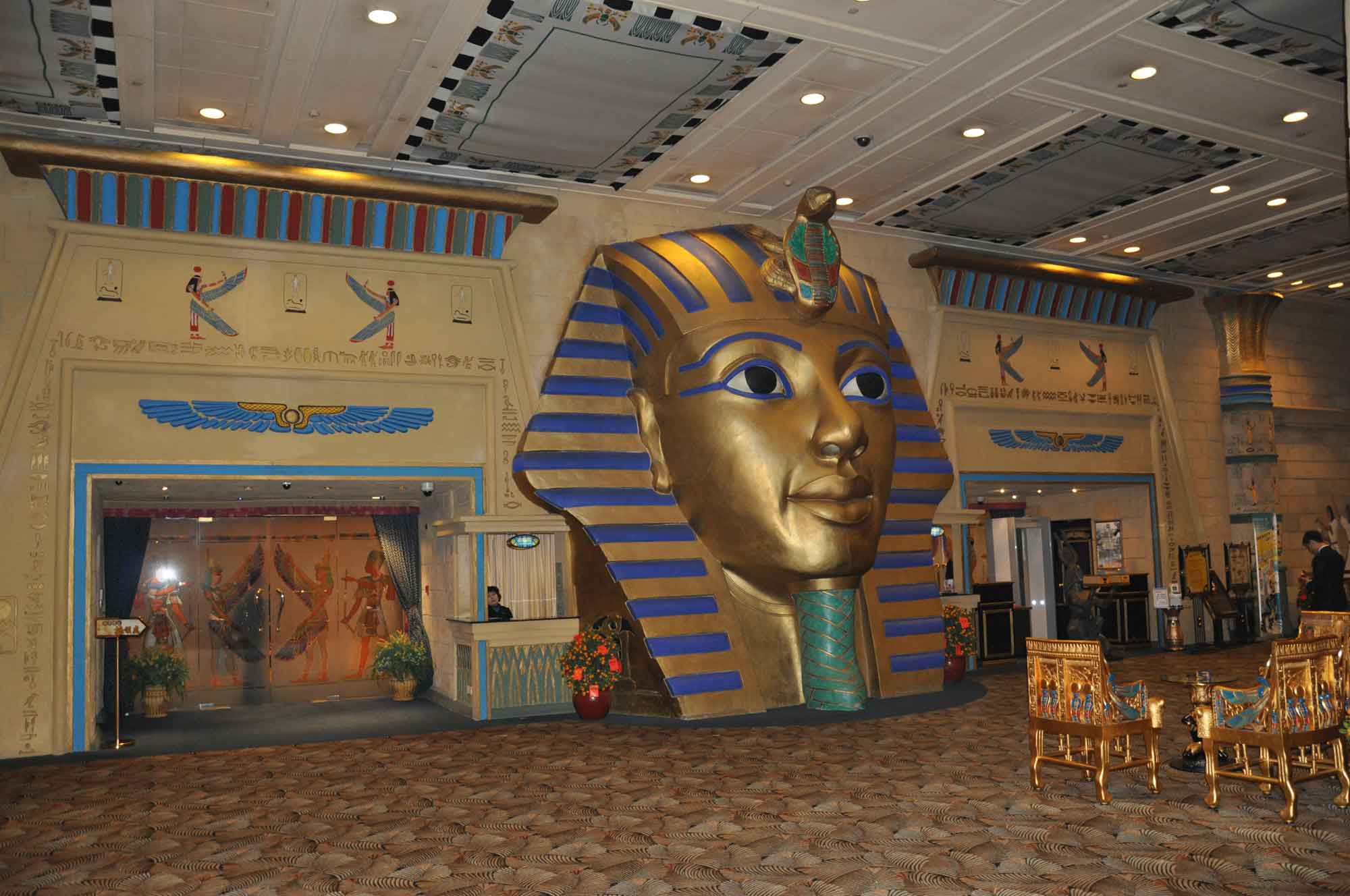 Here are a couple of pictures from outside the casino, when it was known as Pharoah’s Palace. 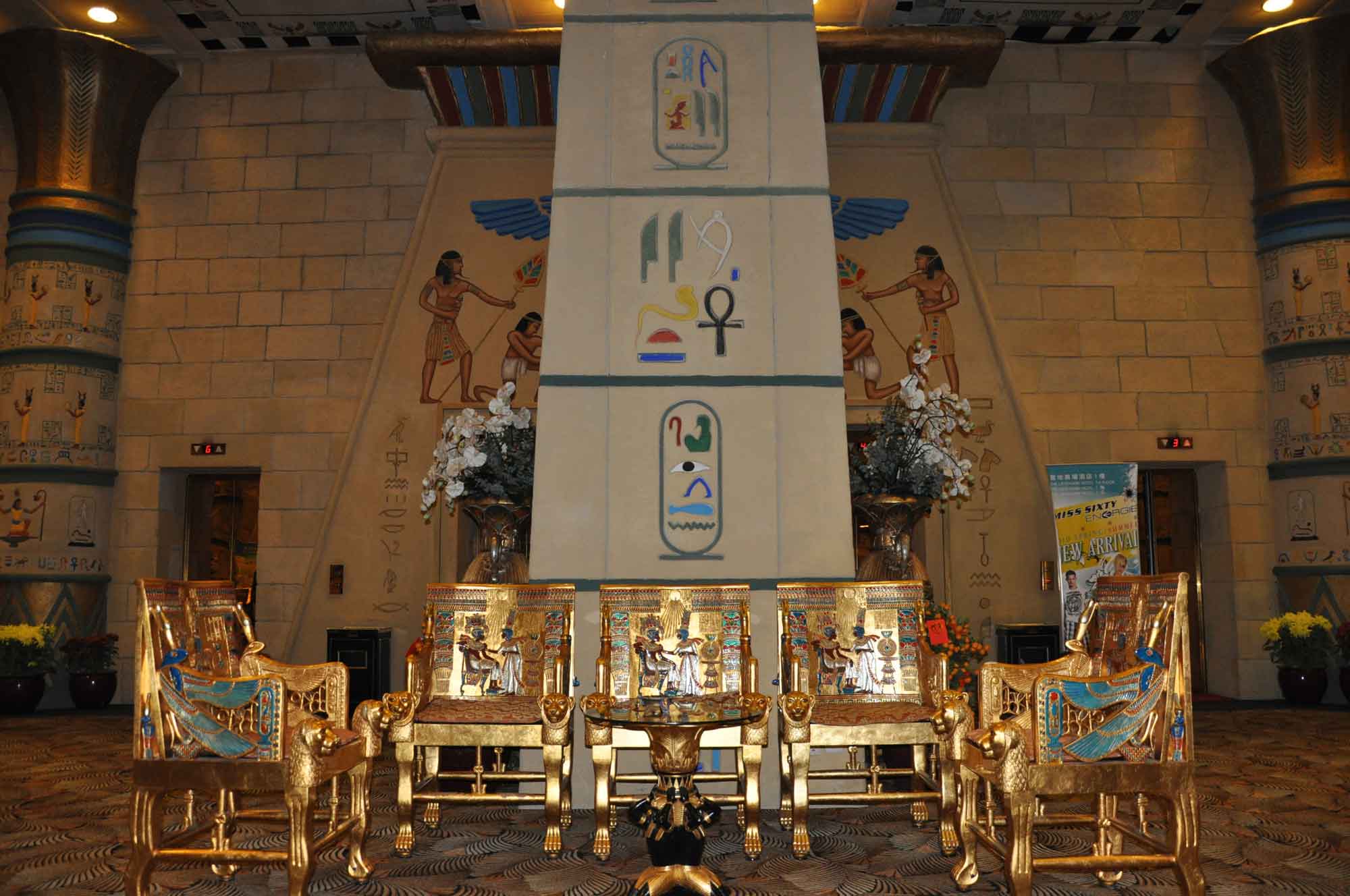 Landmark has a very good assortment of games for a casino its size.

Roulette – Both Inside and Outside bets are $100.

The Landmark is down to one VIP program now, which returns the the following rates.

Gamers can choose either the Cash Back or the Comp Allowance, but obviously not both.

In a mild surprise, Landmark is one of the few casinos in town without a player card.  No worries though, because those sweet $100 and $200 minimums totally make up for $35 bowl of noodles you may have otherwise gotten for free.

Landmark opened way back in 1997 which is ancient for hotels anywhere, especially in Macau.  Engaging in ageism here isn’t a good idea though because it’s still one of the best options on the Amizade Strip. 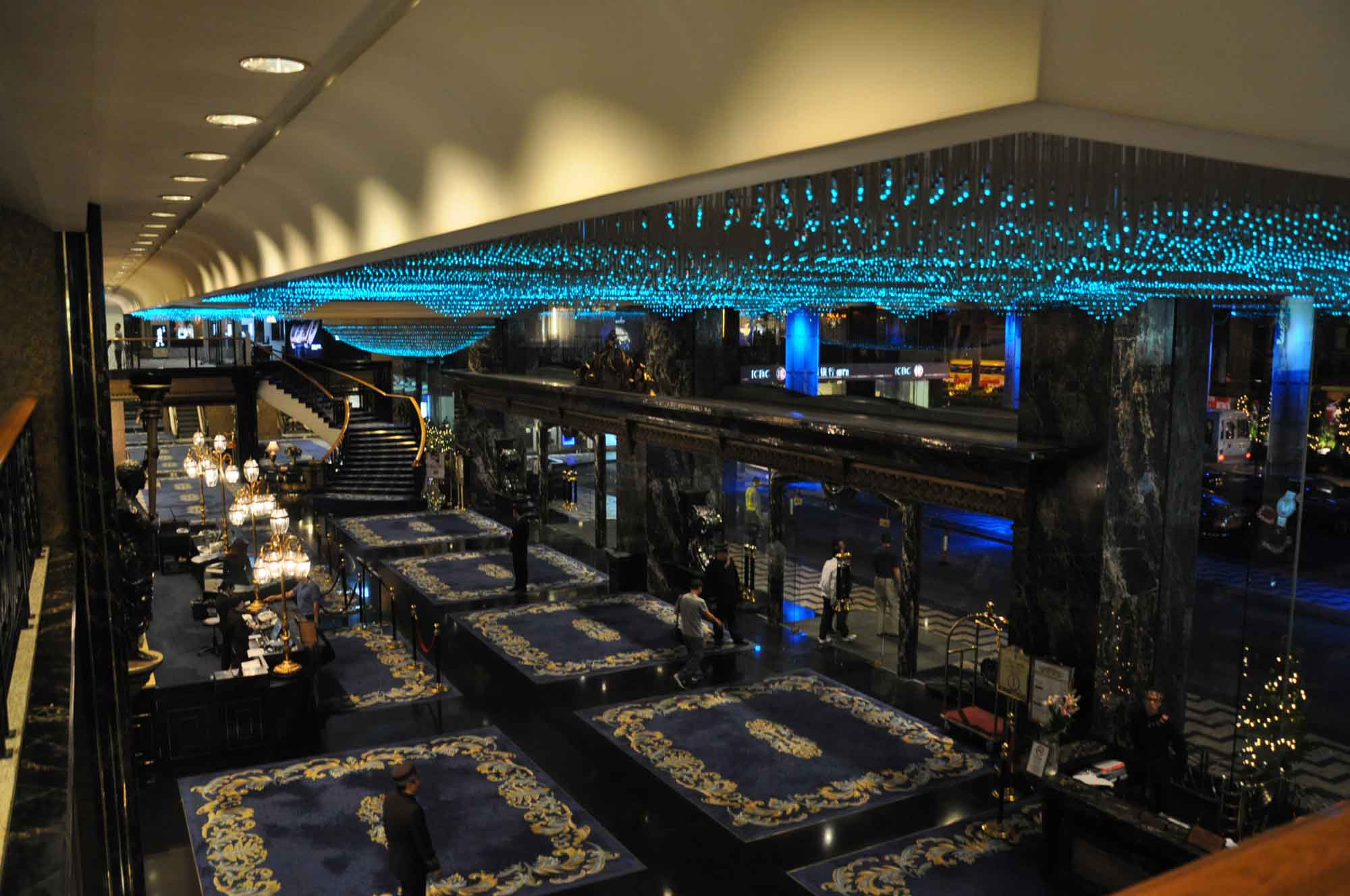 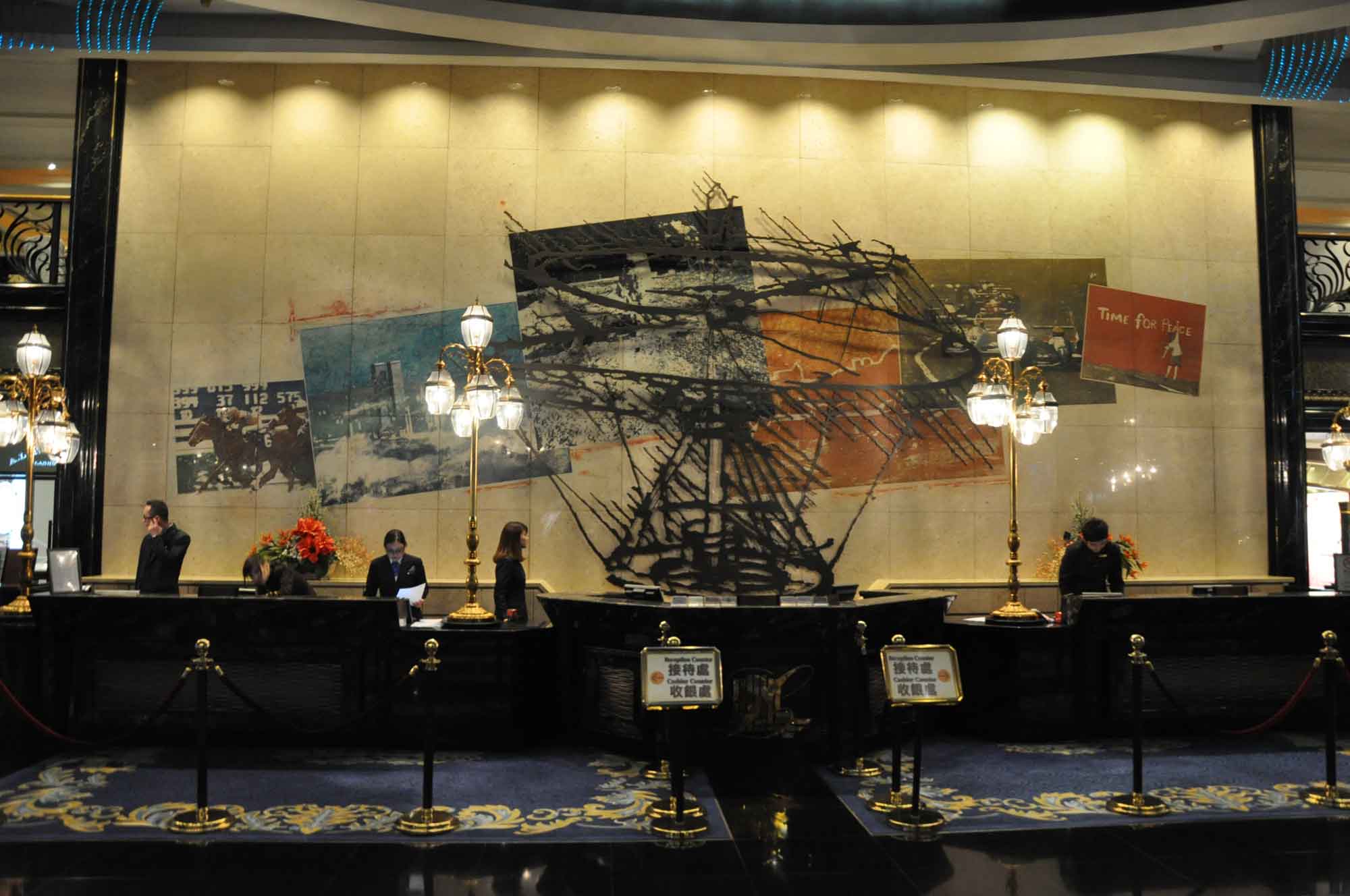 Prices from the New Orient Landmark website are in Macau Mops and include all tax and service charges.

I think travel sites like Trip.com and Agoda routinely sell Landmark rooms for around $800 Mops a night, so definitely look there first.

As mentioned in my 10 Top Tips, you shouldn’t be afraid of older hotels in Macau, especially when some of them used to go by the names Mandarin Oriental (Grand Lapa), Westin (Grand Coloane) and Hyatt Regency (Regency Art Hotel). I think we can add another one to the list in the New Orient Landmark, which had been known as Landmark Macau for over 20 years before switching ownership around 2018.

As a general rule, hotels that were built pre-handover from well known international chains were built very well, offering large comfortable rooms, outstanding spa facilities and a comprehensive sort of resort experience. As such, the New Orient Landmark Macau is probably a lot better than most people give it credit for, and I’ve got the proof below.

The second hotel on my 2020 Coronavirus Tour, I stayed for one night on Wednesday, February 19th. Given that the entire property was a ghost town, I had no problem checking in early at 12:00 pm. It was a maze to get to the room, first having to go through one set of elevators to the 6th floor, and then transferring again, but they had staff on hand to ensure the transit went smoothly.

I had booked a Standard Room through C Trip for $667 Mops, which was a savings of about $140, had I gone through the Landmark site itself. When I got to my room on the 16th floor of the West Wing, number 1619, I couldn’t believe how large it was. 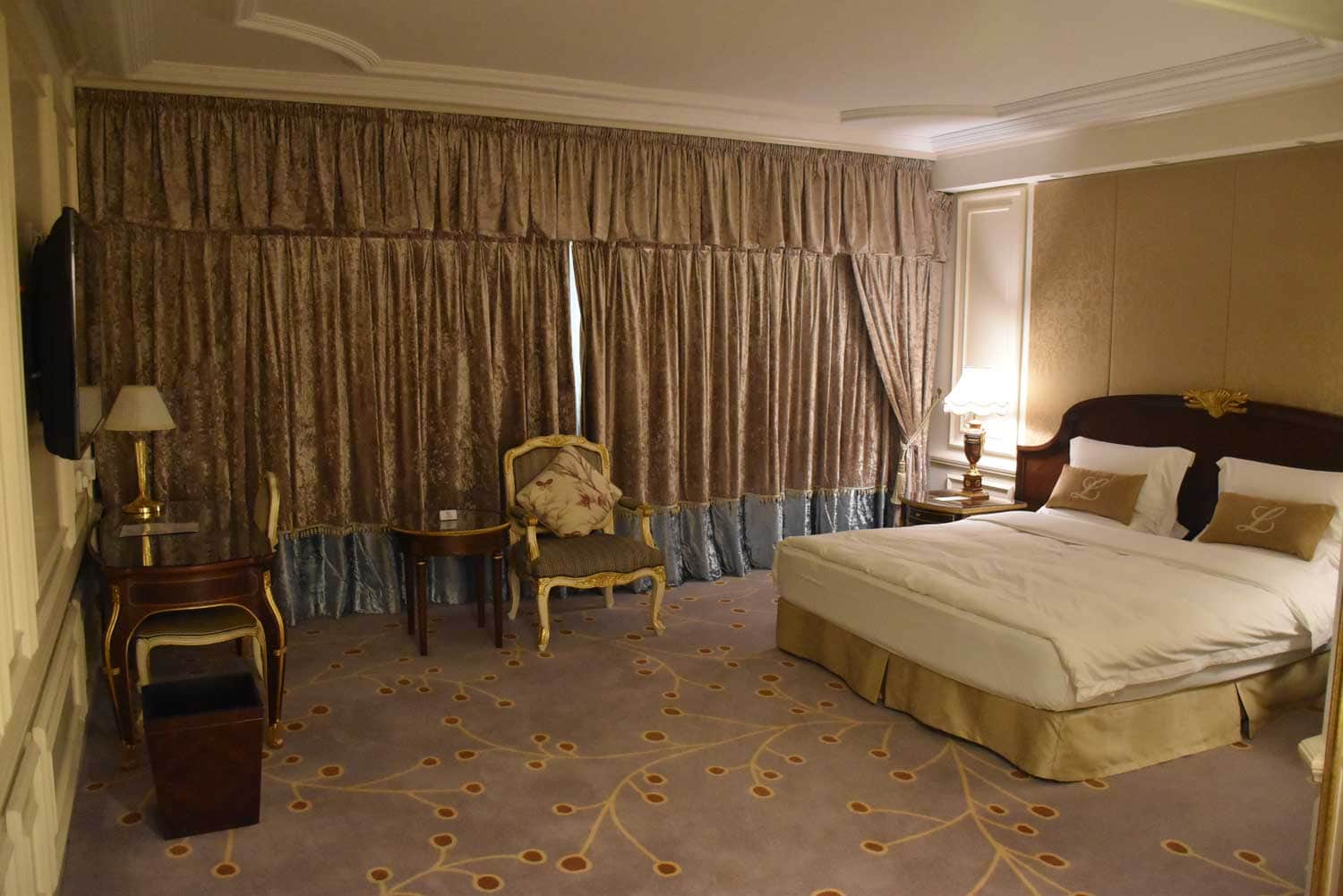 Indeed, I had scored a free upgrade to a Deluxe King, which has a going rate of about $1170 per night.

The size of the room (60 square meters) reminded me of ones at the Grand Lisboa and Wynn Palace, two hotels that are far more expensive, generally close to $1600 per night. 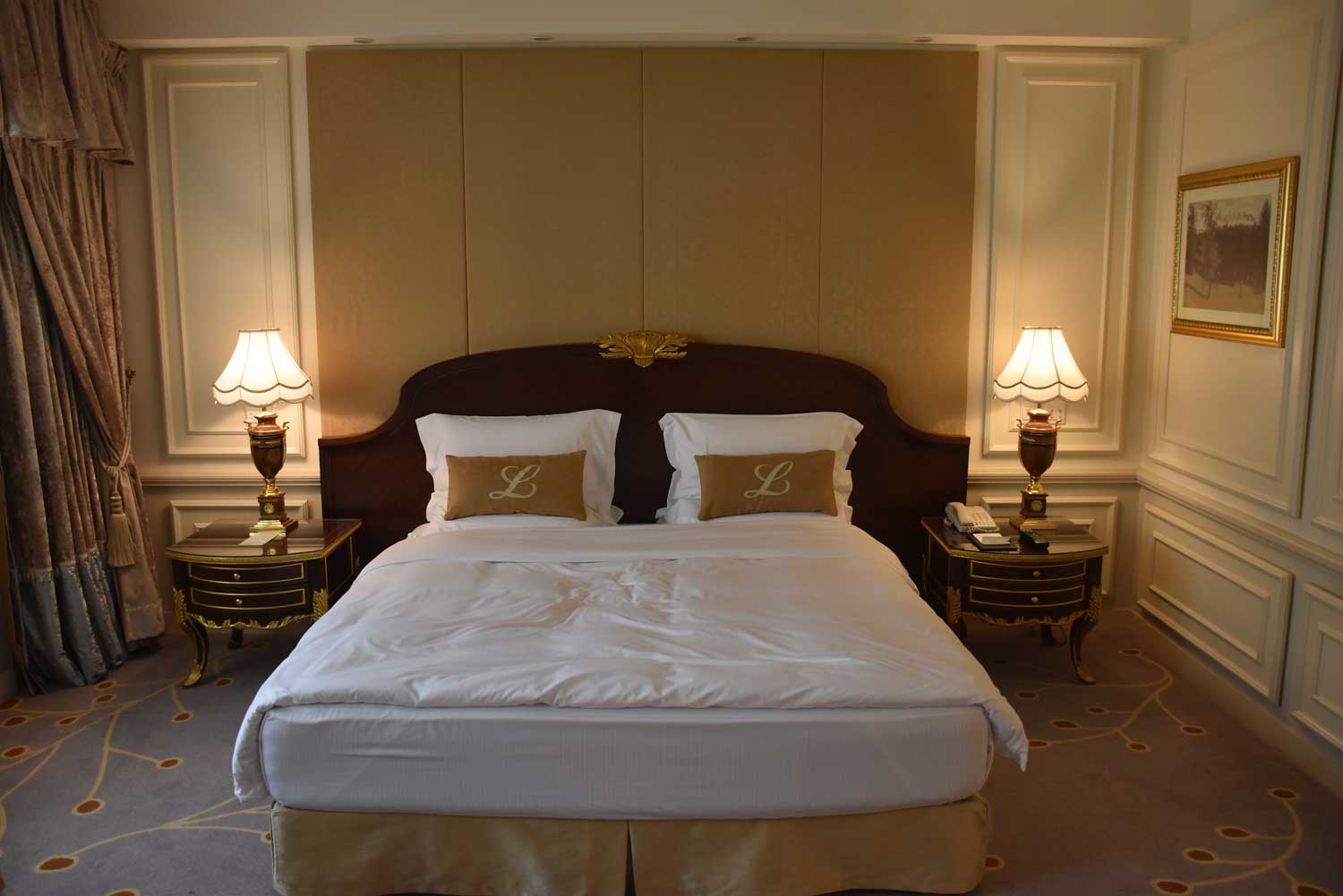 Just as in those two hotels, the bathroom was especially spacious, and came equipped with a killer bathtub and separate standup shower. 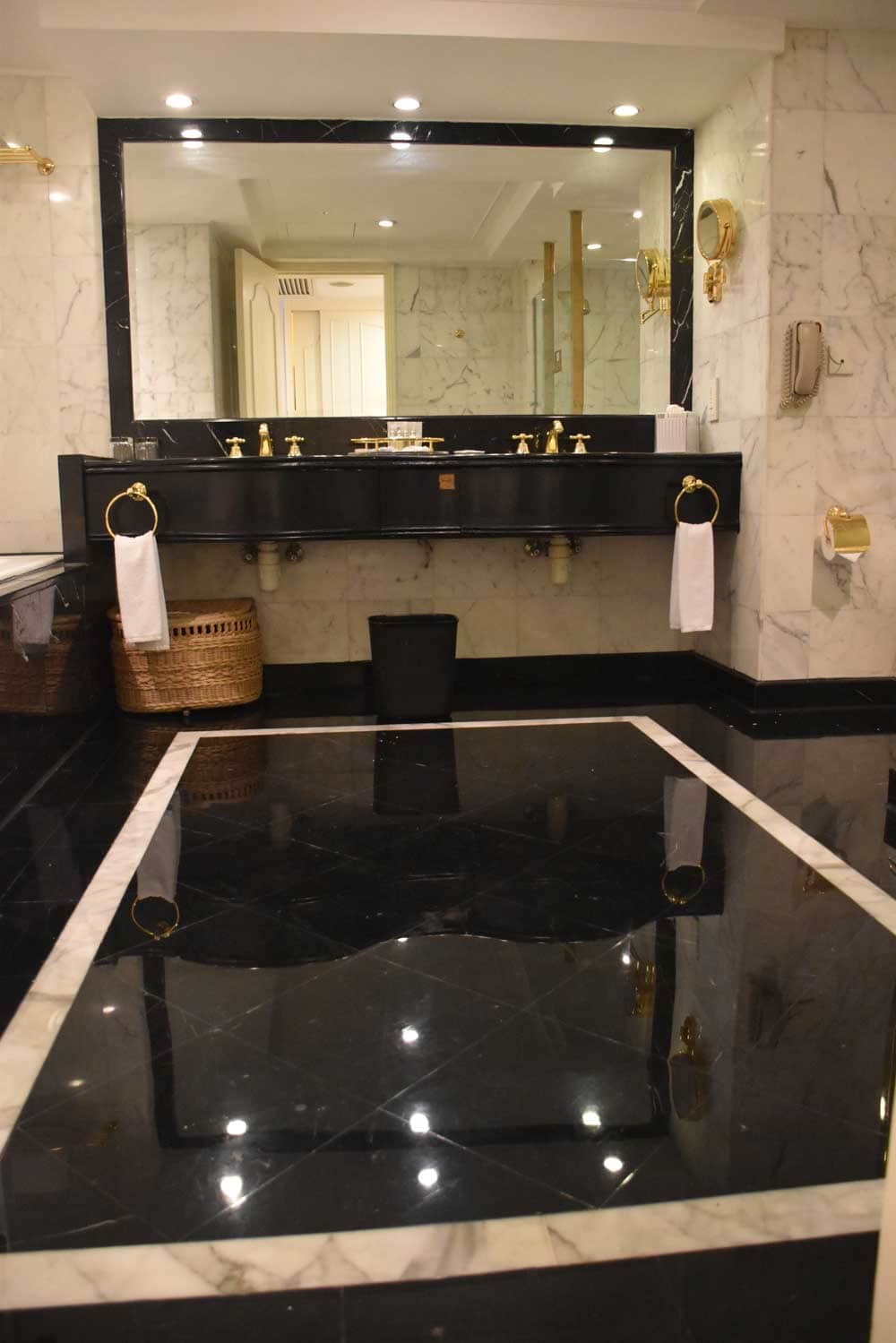 It’s one of those bathrooms that you could hold meetings in, where five women could easily stand in front of the side by side dual power sinks and faucets getting ready for the night (hopefully as you monitor and give instructions from the bathtub.) 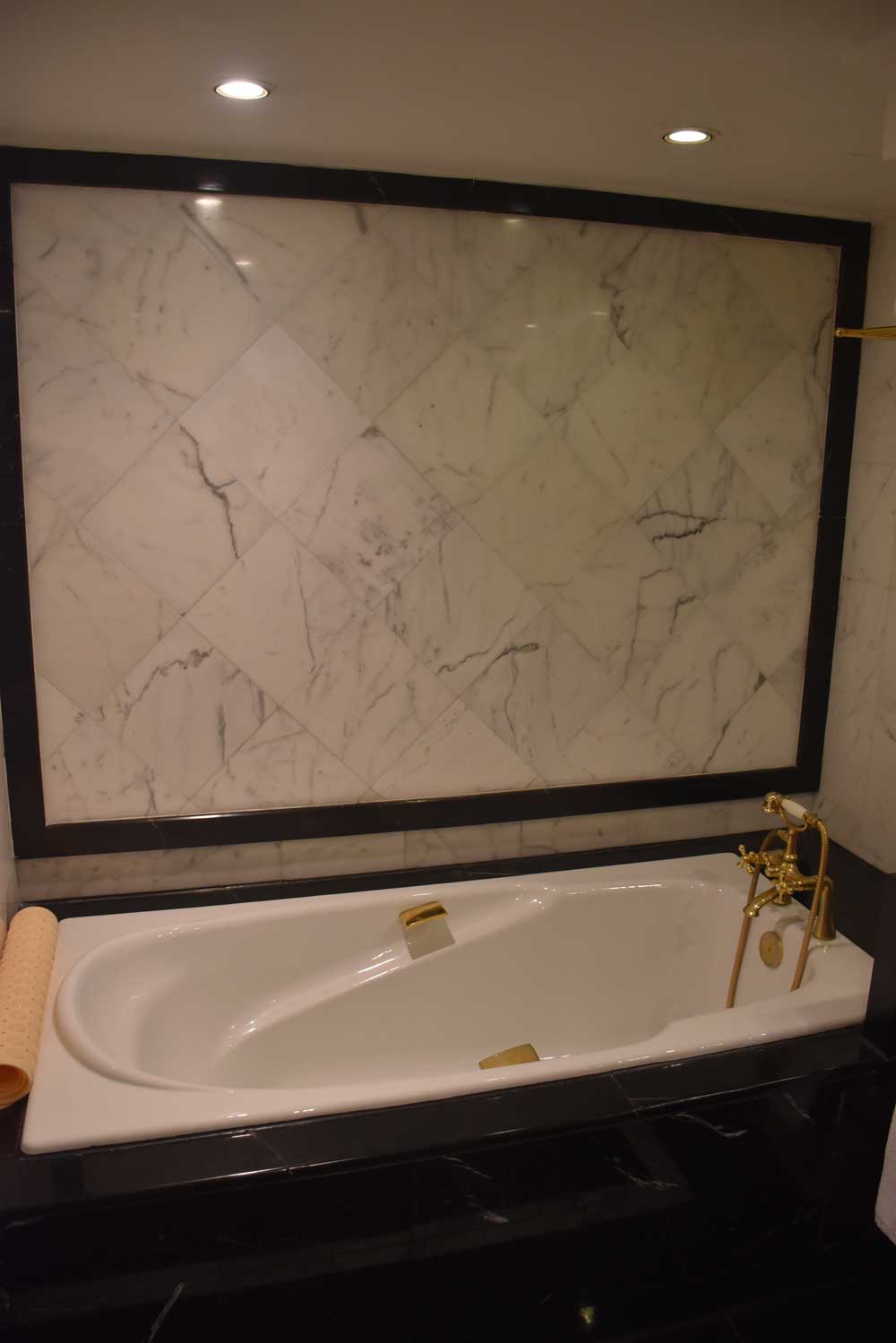 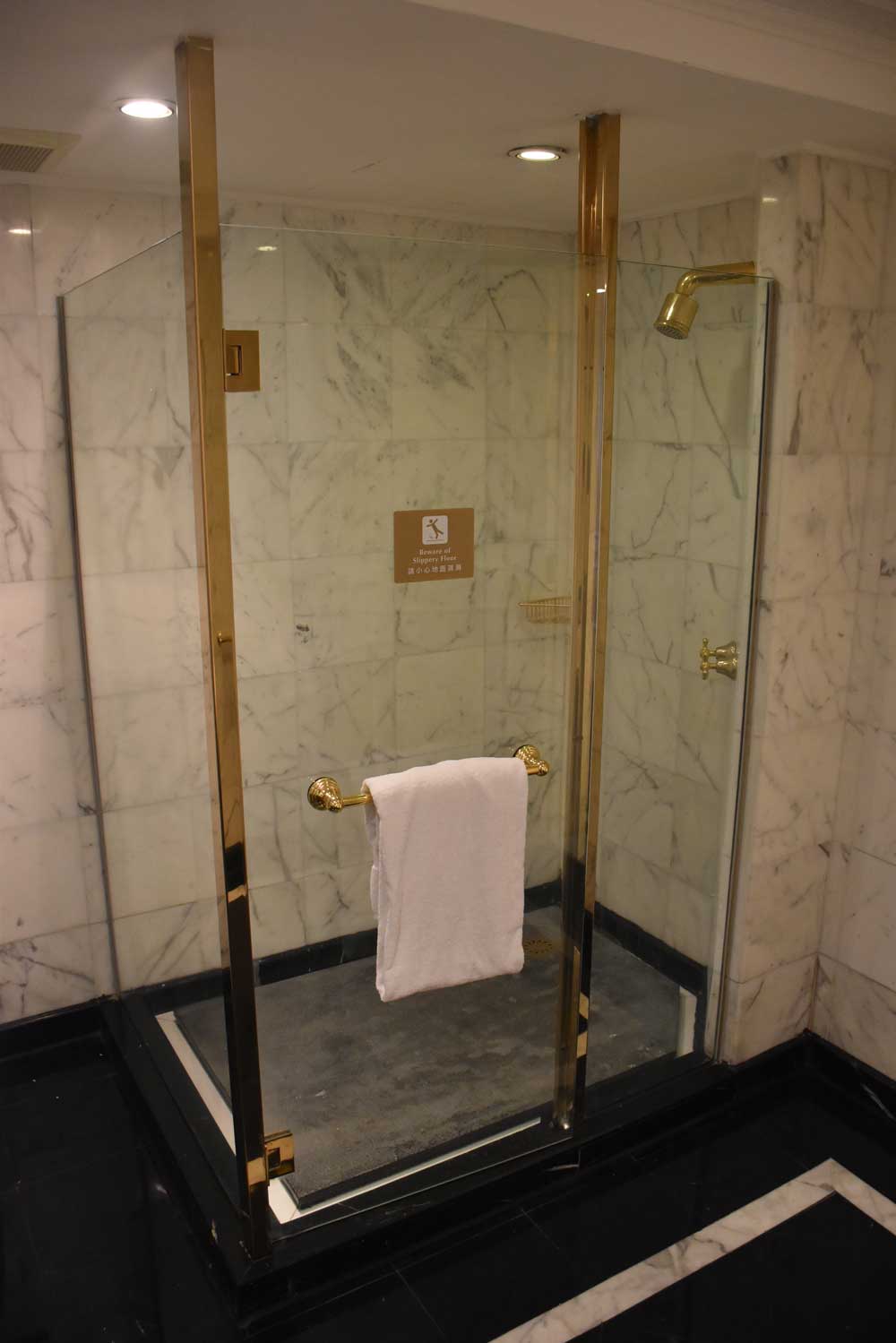 Even when the Deluxe King is the full normal price ($1170), I think it’d still be worth considering, given its abundance of space and classy retro furnishings; in particular, the regal curtains, lamps, chairs, desk and bedside table. 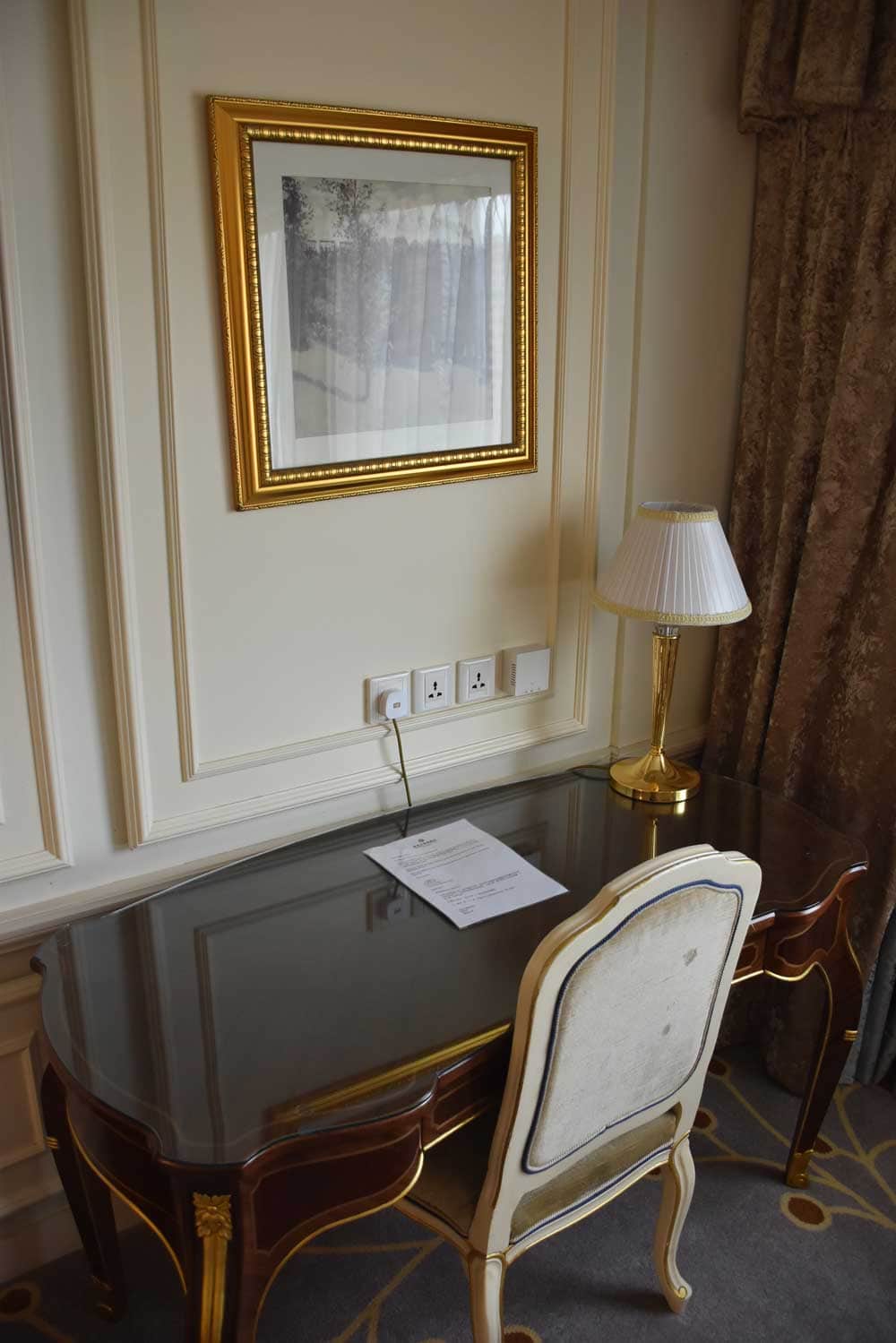 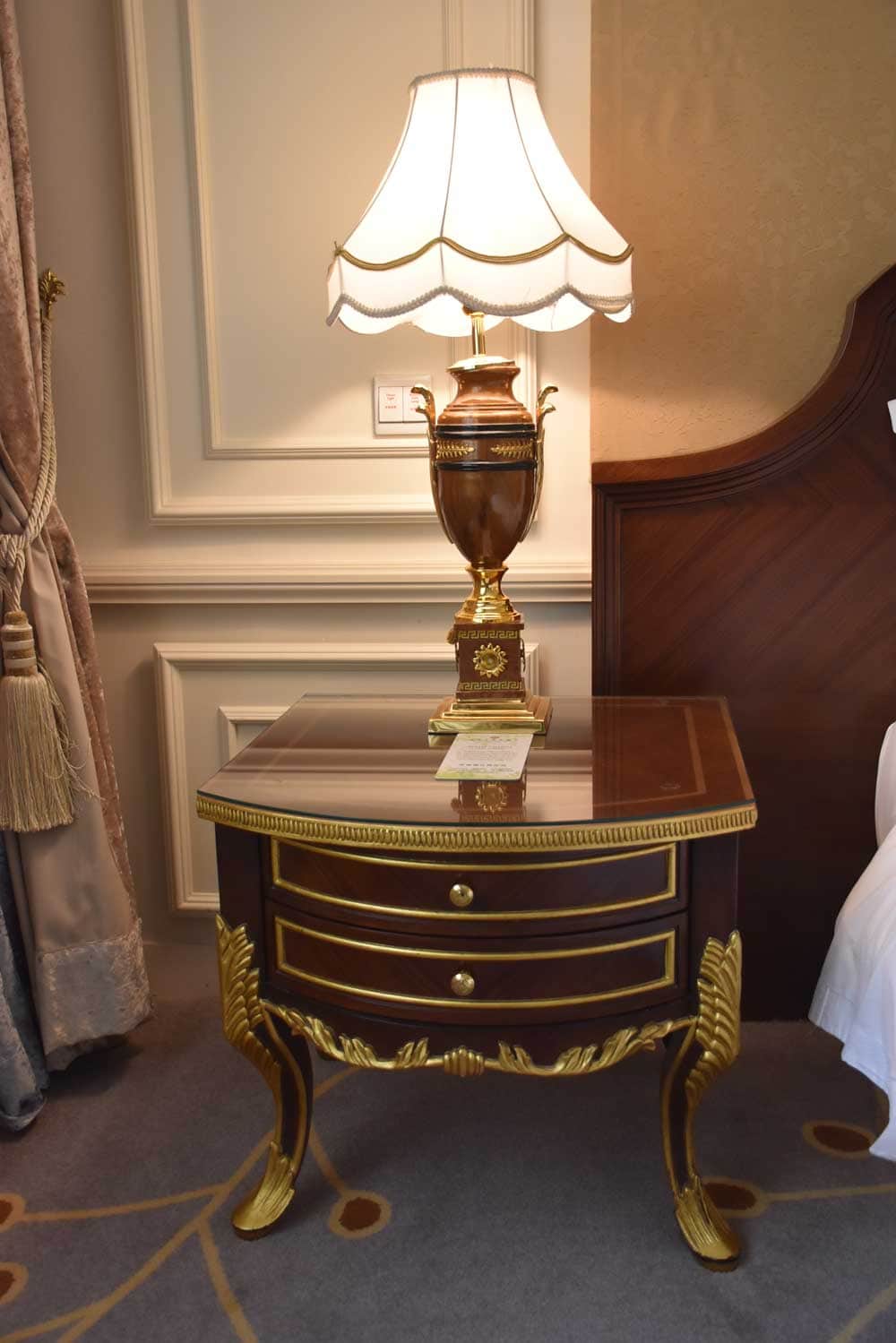 The room exude the same sort of history and elegance that ones at the Lisboa do, just upgraded slightly from 1970 to 1979, which you just don’t get in newer hotels. So yeah, the Landmark rooms have some swagger, they have some style, they have some panache, and above all, they have some fantastic value. It truly exceeded my expectations 100%. 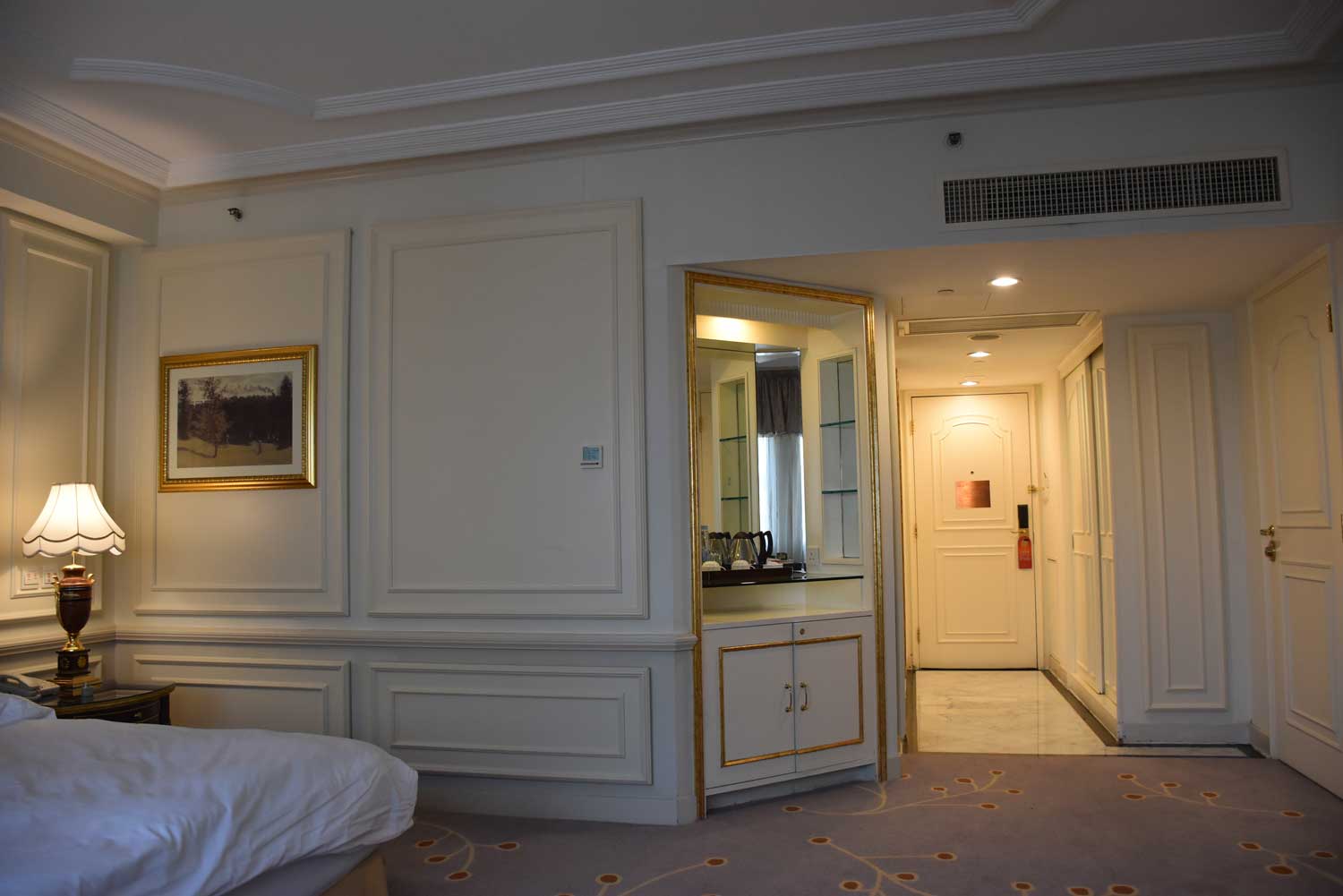 At the same time though, it is called the New Orient Landmark and not the Landmark anymore, so everything wasn’t perfect, and some signs of slippage were evident. First off, communication on the phone sometimes led to problems, with instructions in English often not understood, while the “fully stocked” mini bar advertised on the website didn’t offer a single thing, the fridge completely empty as well.

There was no TV list explaining the stations, and the English on the TV didn’t always correspond to the proper channel, although the selection wasn’t bad, with 10 to 15 of them foreign networks. Lastly, there was a bit of wear and tear evident on the floorboards by the door, which they really take care of, while one electrical socket was broken as well.

On the day of the checkout I overslept badly, all the way to 1:00 pm. I immediately phoned the front desk to see if I could check out late, and they said no problem. Indeed, late checkouts at 2:00 pm are often easy to get in Macau, provided it’s a nicer hotel and not a weekend or other peak time.

All in all, I had an excellent stay at Landmark in the midst of a terrible virus, and you might want to put their supremely adorned rooms on your bucket list sometime soon.

Landmark’s indoor pool is swank and styling, and open all year round.  The plants down the side are a nice design touch too, as is the jacuzzi. 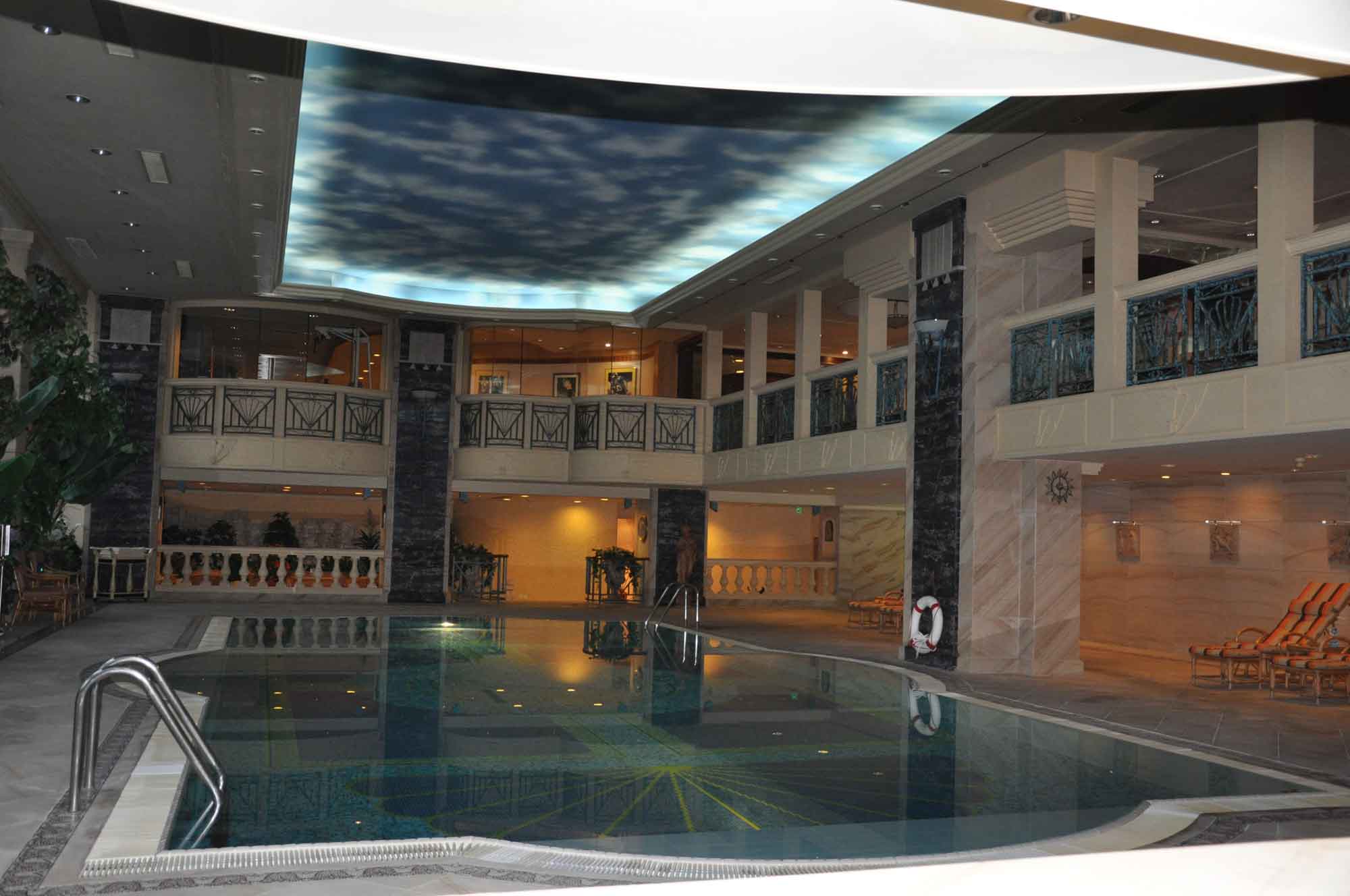 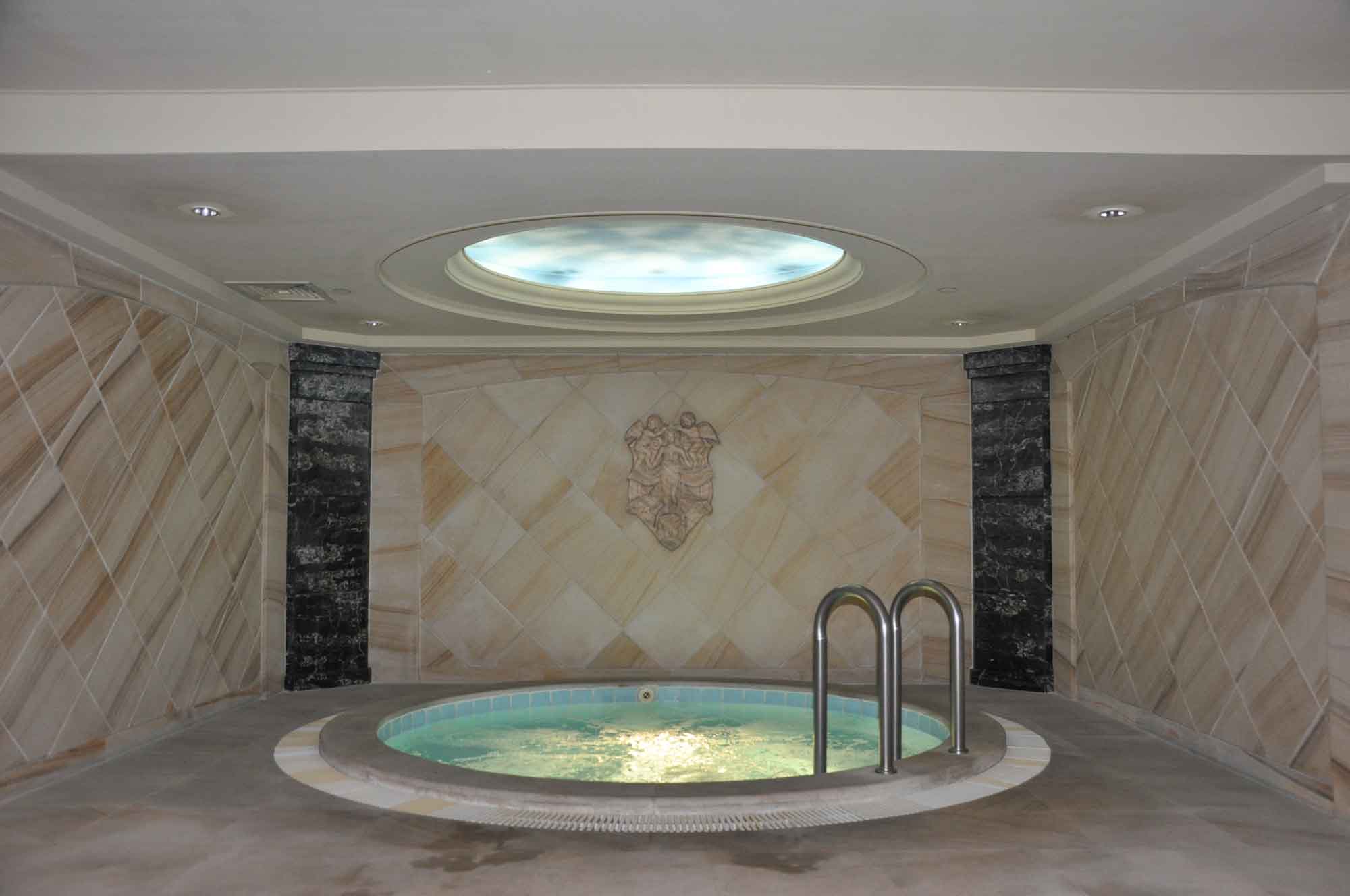 Varanda – Varanda serves International Cuisine on the western side of Level 1.  Although it doesn’t look very large it’s actually a serious restaurant with a large menu.

King of Kings Restaurant – King of Kings is right outside the Pharaoh’s Palace casino on Level 3.  Small small place it serves typical Chinese fare with appetizers $28 to $58, soup $58, and simple rice and noodle dishes $38 to $98.  There’s also regional selections with Chaozhou BBQ $78 to $128 and Sichuan specialties $48 to $198.

There are two spas at the Landmark, one legit and one that specializes in sweet sin.

Guests at Landmark can access the spa on the 5th floor and its sauna, steam room, hot tub and jacuzzi for free, a very nice perk that most hotels in town don’t provide.  Non-guests have to pay $184 for that action, which includes access to the gym.  For those on the road looking to work out in a pinch, that’s not a bad price.

One Sauna – The privately owned One Sauna operates out of the 2nd floor.  Featuring all manner of illicit delights, the door pass costs $880 for 12 hours while full service ranges between $2580 and $4680.  Straight up massage is $1180 while those with happy endings are $1480.

The One Sauna stays open 24 hours.

Landmark has one KTV in the basement named the Cave.  Years ago it used to be a full fledged bar, now it’s mostly just a brothel.

Landmark’s gym is three to four times larger than other gyms found in comparably sized hotels.  With a wide selection of cardio equipment and heavy duty weight machines, getting a good workout there won’t be a problem.

The gym is located in the 5th floor Recreation Area, and has the same hours as the Spa.

Landmark has a reasonably sized shopping arcade spanning three floors in all.  Familiar players in the Eurotrash scene all peddle their goods there, with Patek Phillippe, Hugo Boss, Rado, Omega, Piaget, and Franck Muller all in the house. 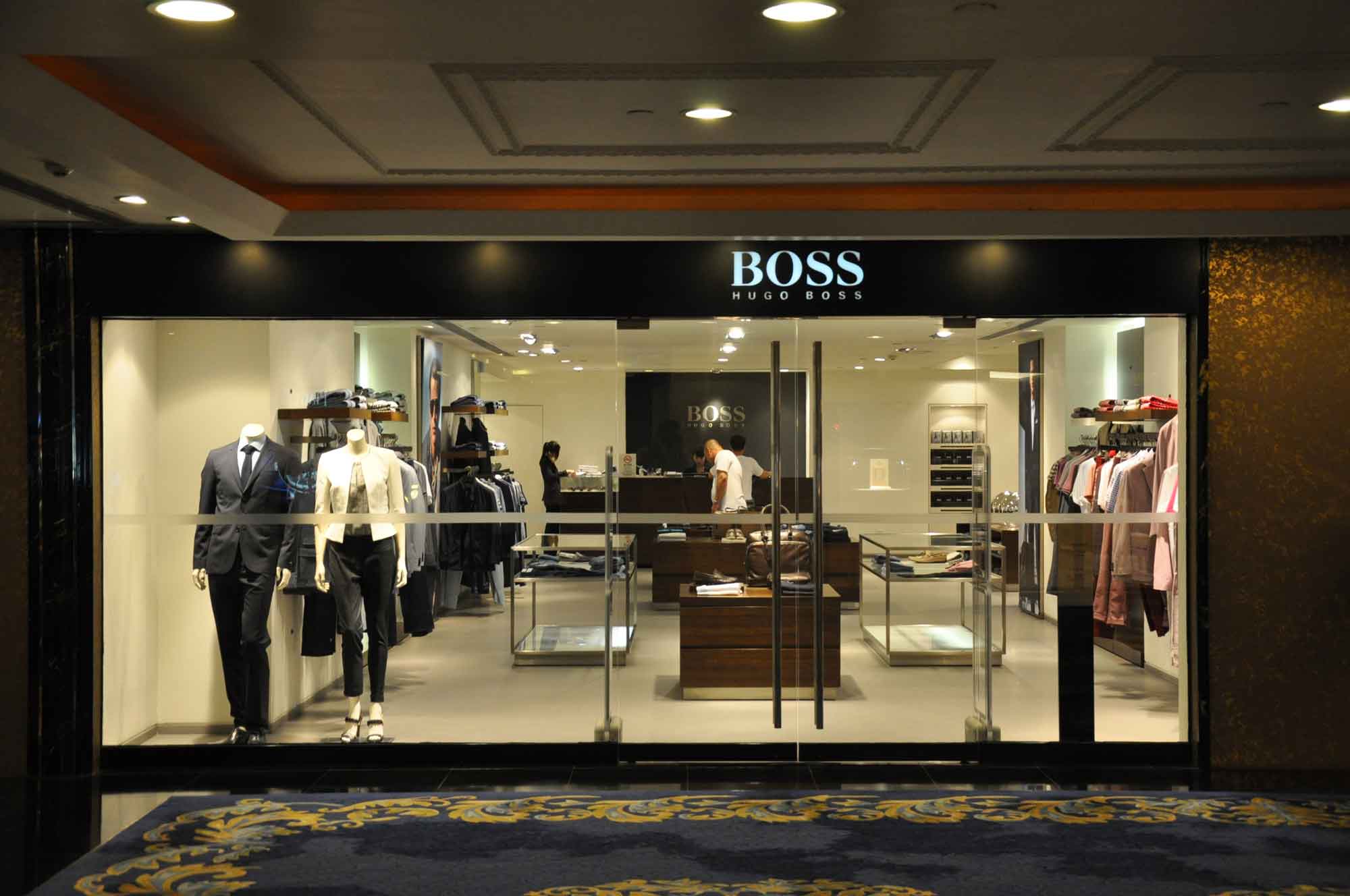 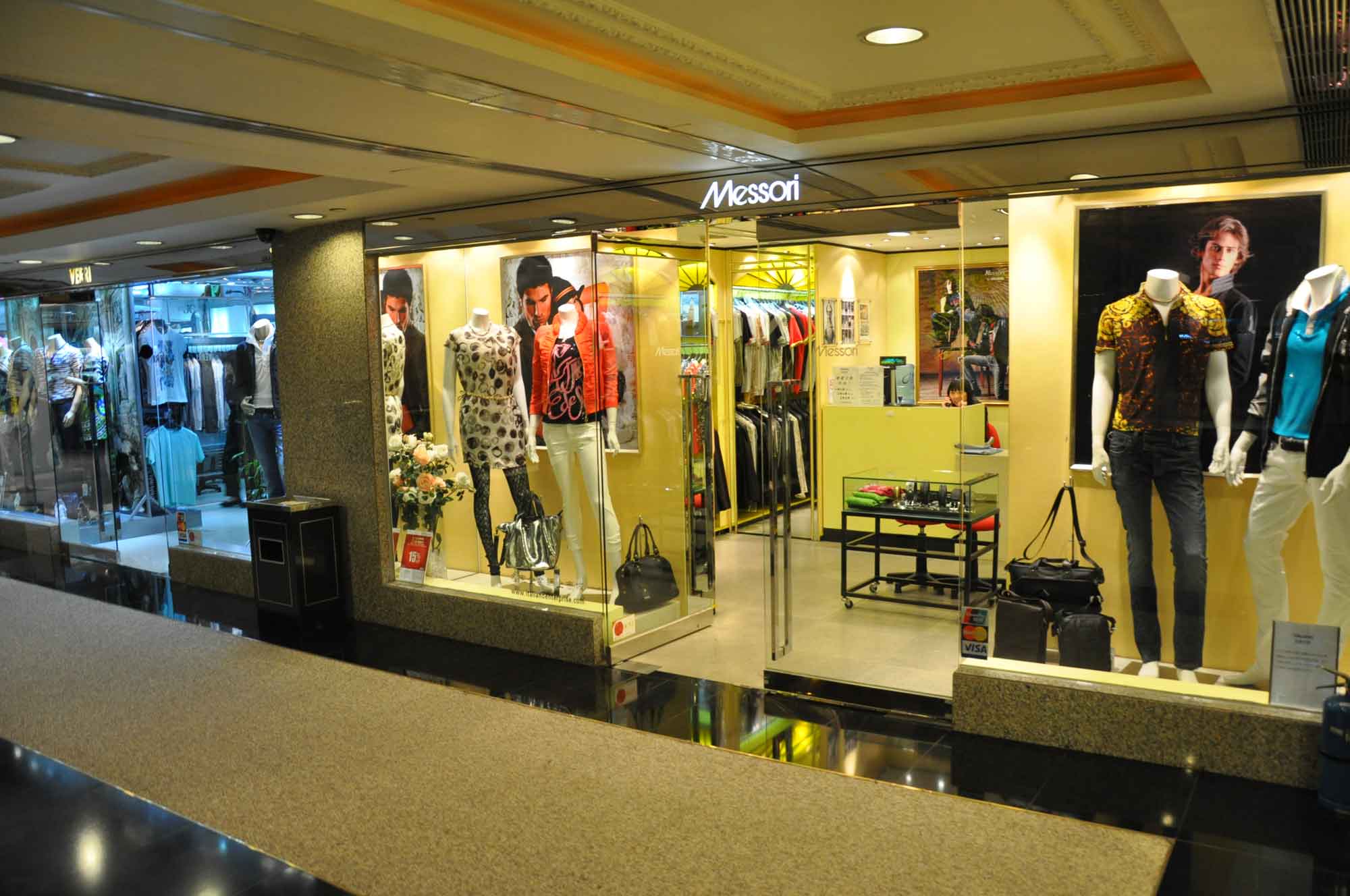 The New Orient Landmark was built last century and looks it too, but don’t let that dissuade you.  Older properties such as these tend to age very well in Macau, and the Landmark is yet another example.  It does quite a lot of things reasonably well with the end result more than the sum of its parts.  I love the old vintage rooms in particular and would gladly live there again. 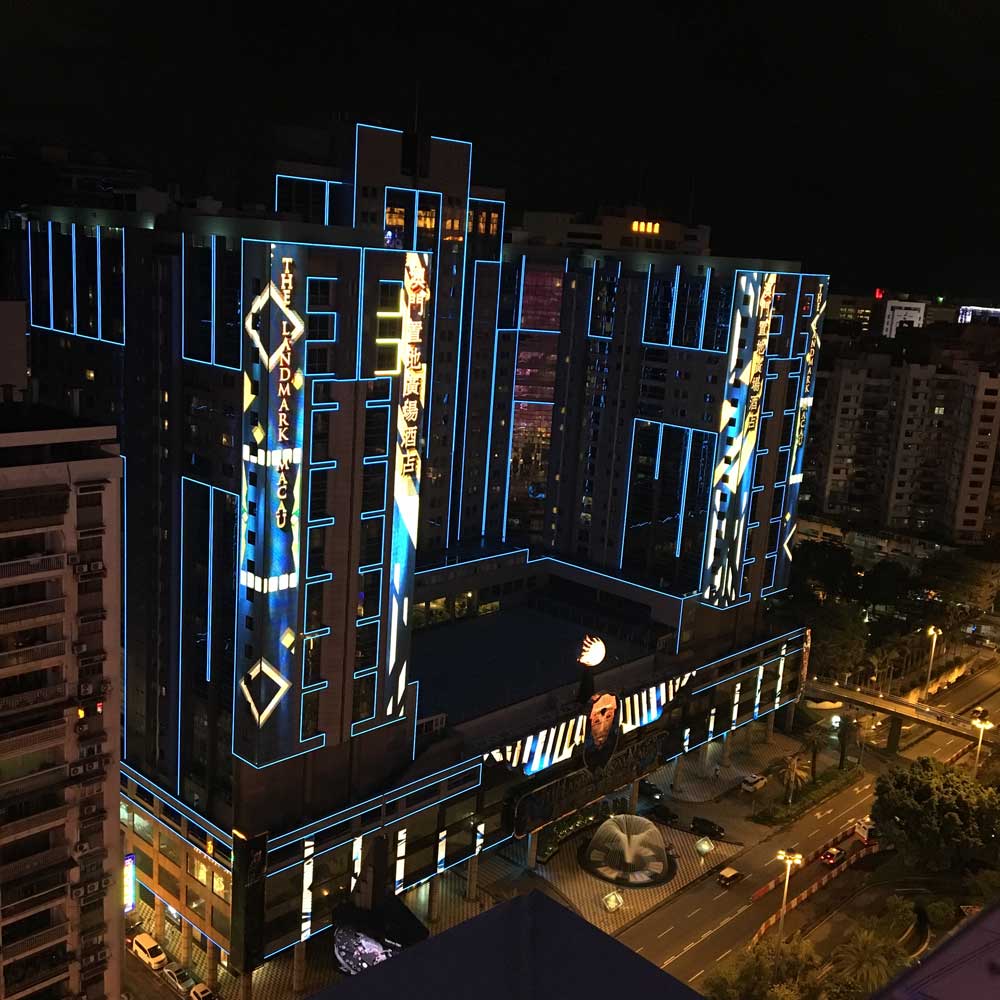 As for the Landmark Casino, it’s remains of the better gambling options in town.  You usually don’t get such good game selection in such a small venue, with Blackjack, Roulette, and Caribbean Stud Poker notable Western games offered.  The limits are very low too, making it one of my favourite haunts to visit in town.

While they no longer offer a player card, player cards generally have little to no value for occasional gamblers and visitors, so no big loss there.

New Orient Landmark Hotel is directly opposite from Starworld on the Southern end of the Amizade Strip.