My last day in Macau began at Sun Iat-Sen Memorial House on Avenida Sidonio Pais.  Right around the corner from the Guia Hotel, I got there at 10 am. 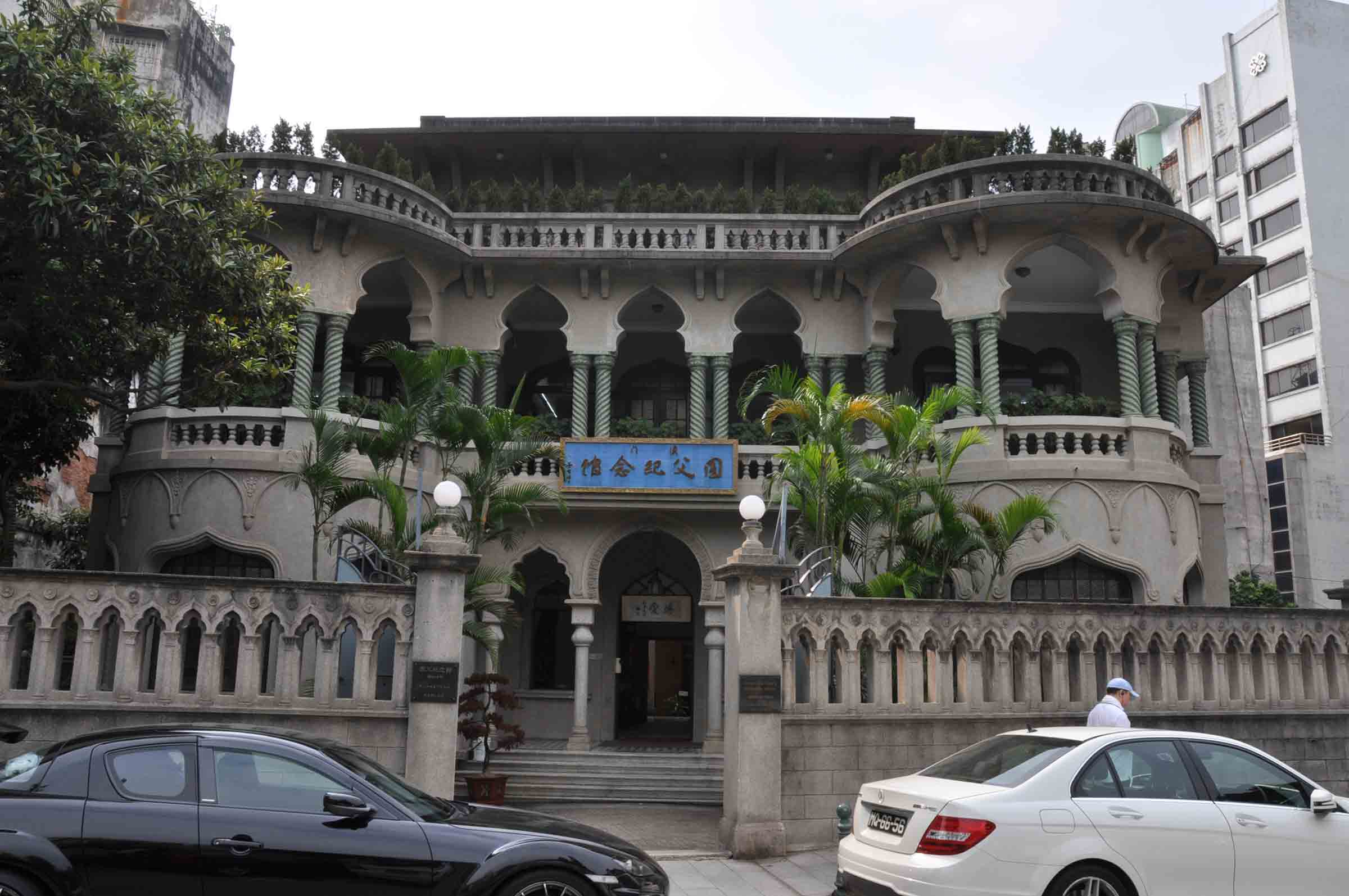 Sun Iat-Sen is quite revered in China but I don’t know why.  If you have two words to describe his life, success or failure, you’d have to choose failure.  A revolutionary who lost a revolution, his ideals and what he believed in have no relevance in modern China, and haven’t for over 60 years.  Yet he is highly praised within the country which doesn’t make a lot of sense to me, but then again, not many things in China do.

Born in Guangdong Province in 1866, Sun spent 4 years of his adolescence in Hawaii receiving Western education.  After returning to China, he studied medicine in Hong Kong, graduating in 1892 at the age of 26. 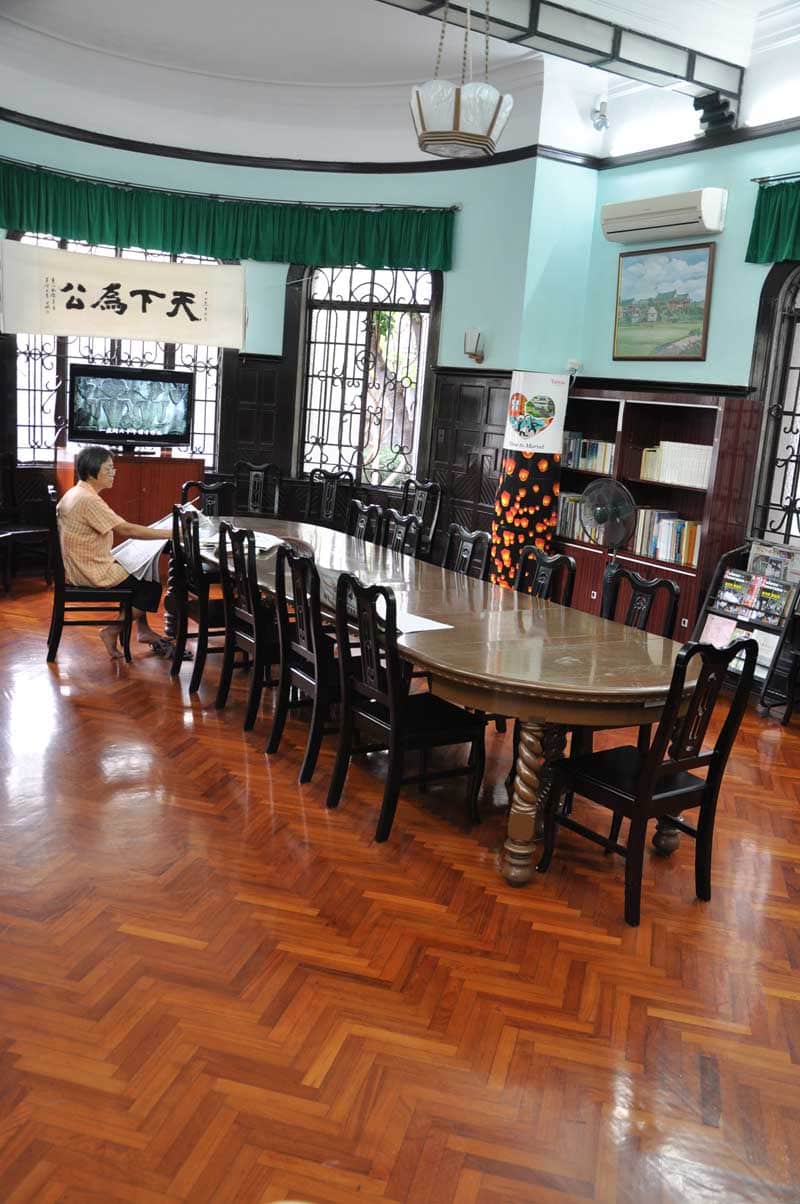 Disillusioned by the Qing government and their refusal to accept Western ideas and technology, he set up and led various revolutionary societies advocating the need for change.  Between 1895 and 1910, he initiated a series of uprisings in Southern China, none of which succeeded.

While Sun was in exile, the Qing government was overthrown by Huang Xing and the Xinhai Revolution in 1911.  Sun quickly returned to China and was sworn in as the first President on January 1st, 1912.  Sun’s presidency, however, was short-lived.  Within three months he was out, and power thirsty Northern General Yuan Shi Kai was in.  In 1915, Yuan ditched all the tenants of the Revolution by proclaiming himself the new Emperor of China.

Control of the country soon fell into the hands of local warlords and Sun was forced to flee again.  He spent the rest of his life trying to gather enough support and military backing to lead another revolution.  In 1929, when the party that Sun founded, the Kuomintang, was finally able to wrest control of the country from the overlords, Sun was already in the ground, having died of lung cancer 4 years earlier in 1925. 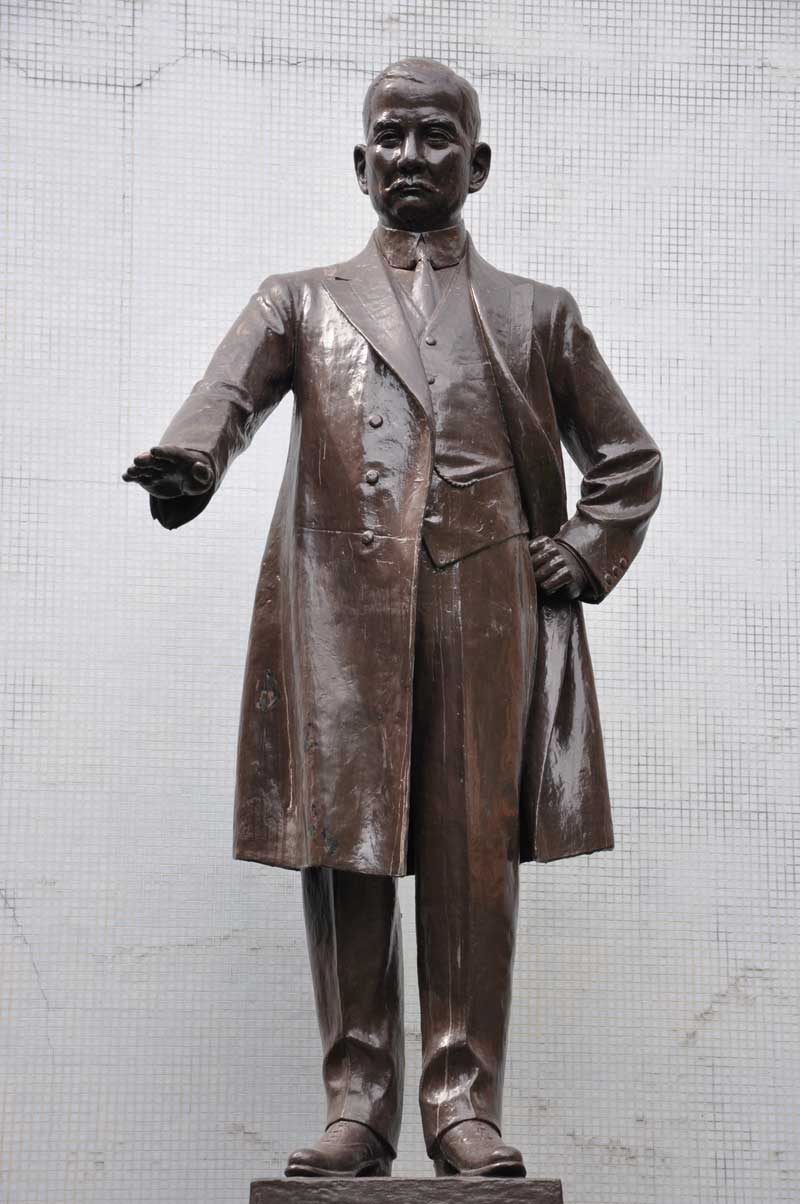 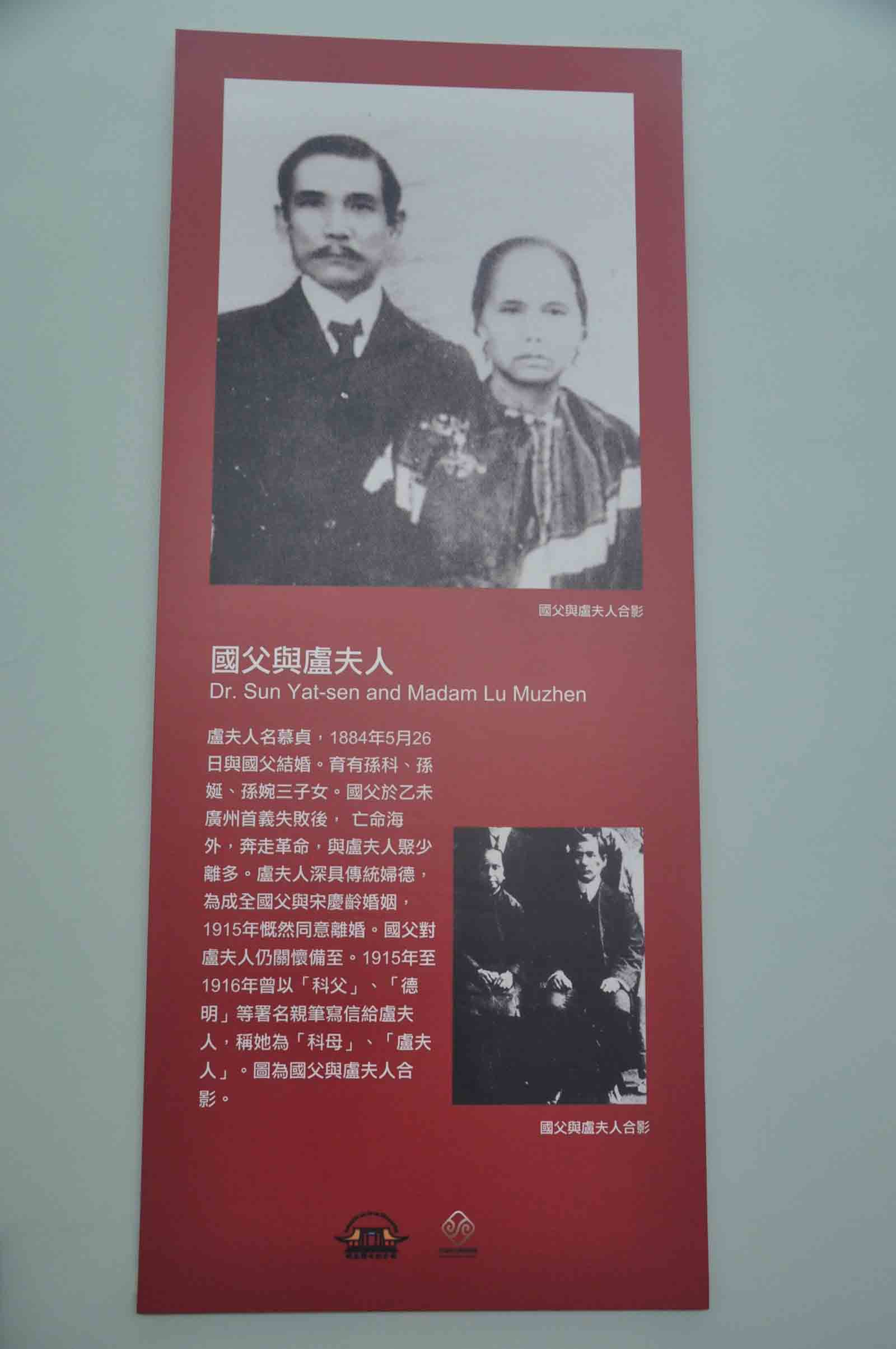 Fast forward twenty odd years and the Kuomintang would eventually lose the civil war to the Communists, and the rest is history.  The great new China was born with Mao and his henchmen initiating The Great Famine, the Great Leap Forward, and the Cultural Revolution.  The Qing government may have been a disaster and had to go, but at least they never did things like that.

With that little introduction of the way, onto the Memorial House then.  Sun spent a year practicing medicine in Macau at Kiang Wu Hospital in 1892, and the Memorial House is where his ex-wife lived after he divorced her in the early 1920’s.  As far as museums go, it‘s pretty lackluster and not up to par. 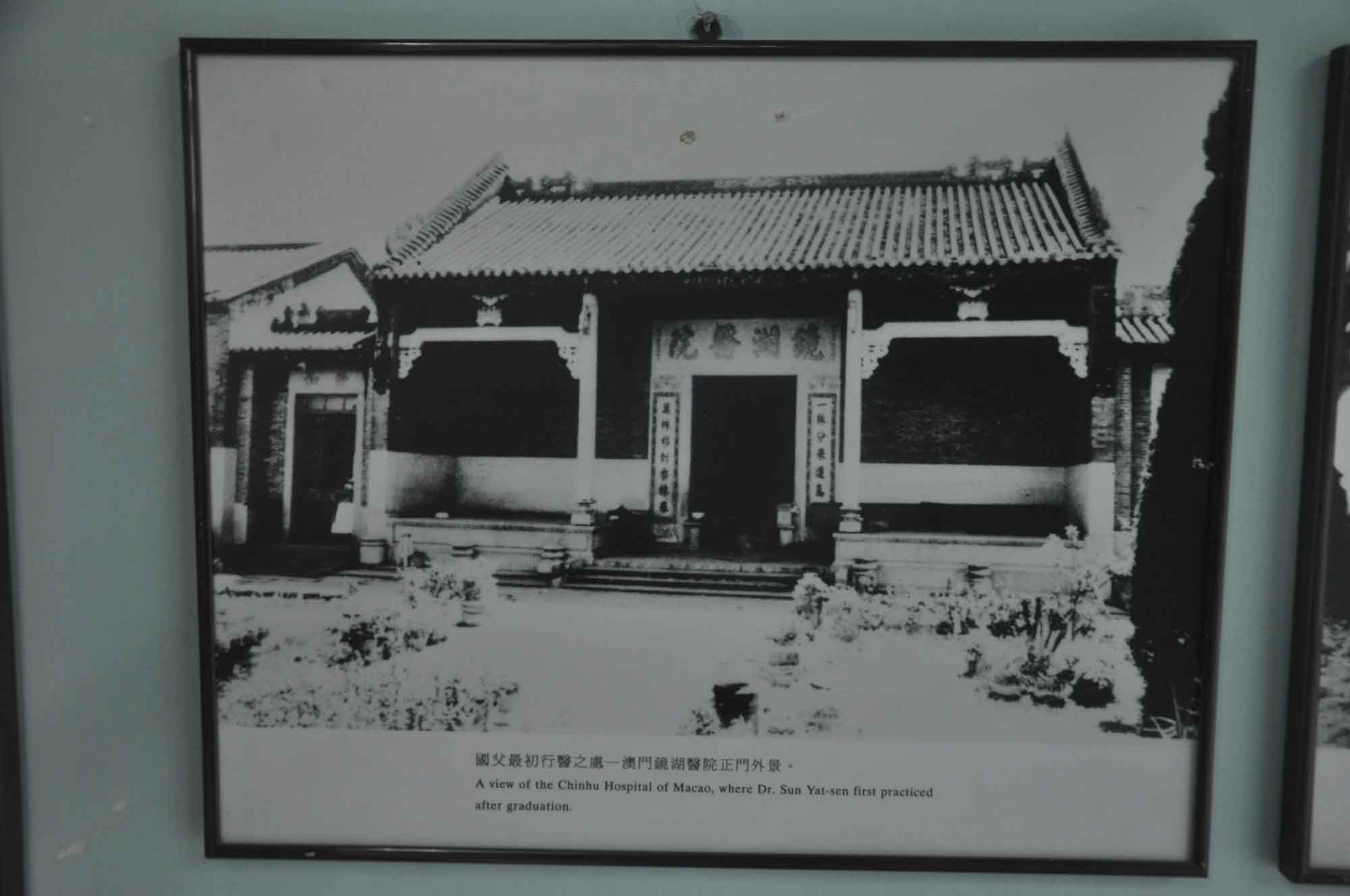 The principle things on show are photographs and there is no real narrative presented of Sun’s life.  I think visitors need to know about his triumphs, failures, motivations, what he ultimately accomplished and how he fits into history. 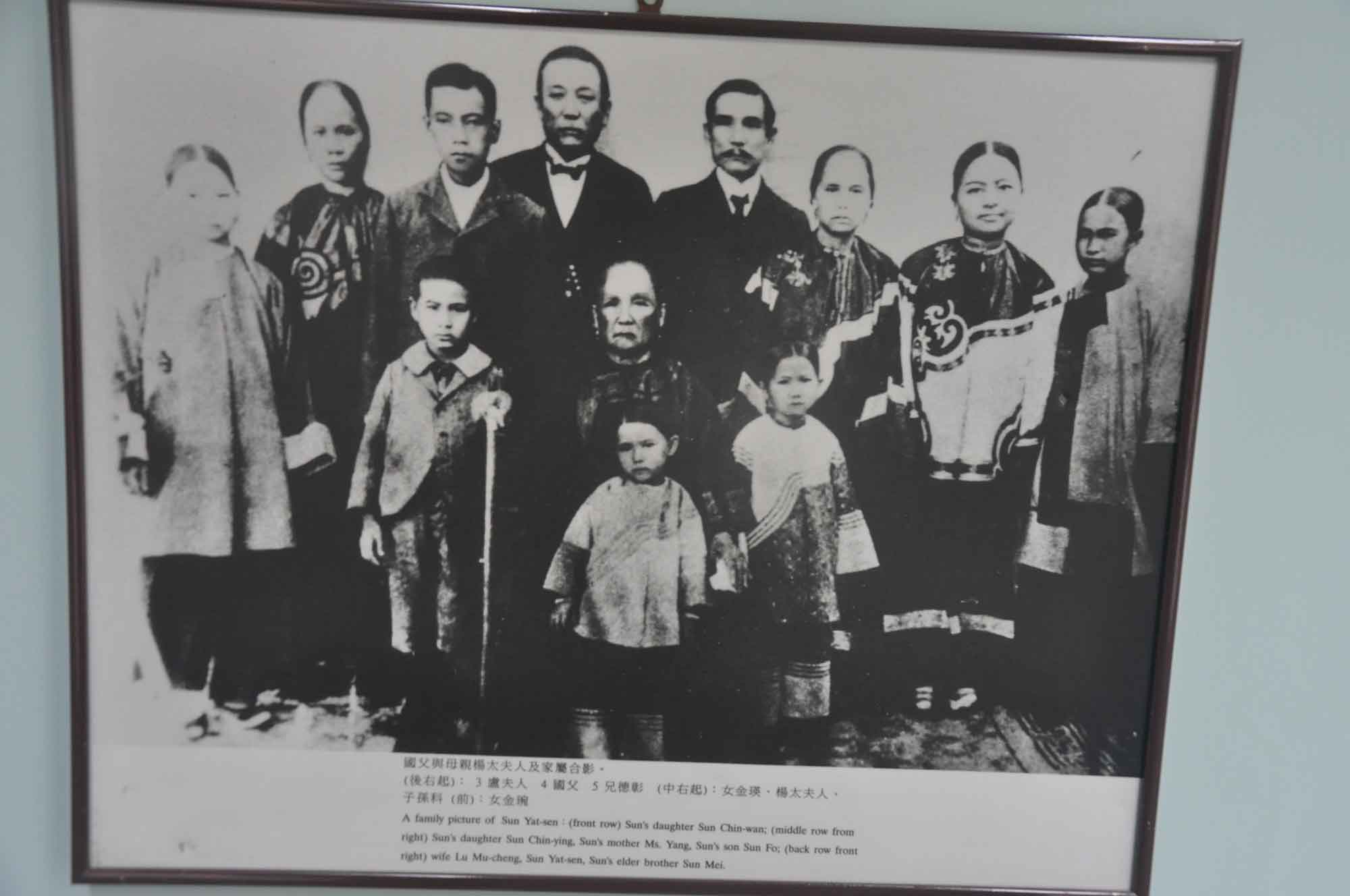 I didn’t get any of that at the Memorial House and unless you know a lot about Sun going in, then just looking at a bunch of photographs isn’t going to do much.

There were also a couple of rooms displaying old furniture that I highly doubt was the original furniture that his ex-wife used.  It’s a bunch of cheap looking stuff that has no place in a house fit to be called a mansion.  Finally, not all of the pictures and exhibits had English signs, which was unfortunate.

In my opinion, the Sun Iat-Sen Memorial House is only useful for people who have a specific interest in Sun Iat-Sen, and even then expectations need to be tempered.  The most redeeming feature of the museum is probably its architecture, and if you choose to visit for that purpose alone, then I don’t think you’ll be disappointed. The outside is reminiscent of the Moorish Barracks, while the interior utilizes a mix of Eastern and Western elements, a la the Mandarin House.  If you’re in the neighbourhood already, then dropping by for 20 minutes wouldn’t be the worst idea.

After the Memorial House, I continued walking up Avenida Sidonio Pais for the Communications Museum.

The Communications Museum is located in an obscure part of town close to the Reservoir and the Islamic Mosque and Cemetery.  Suffice to say, this place takes some getting to, and you definitely won’t just stumble upon it when out and about.  Devoted to the history and science behind communications, the museum is a lot more interesting than it sounds, and I had a much better time than I thought I would there.  Entrance tickets are $10 Mops, and the museum is open everyday except Mondays.

First things first, the museum is composed of three floors, and not four like the guide map says.  The outdoor terrace that’s supposed to have exhibits doesn’t and the Don Maria II Garden and Fortress is no longer open to the public.

The museum starts with a small display zone on the ground floor that showcases obsolete artifacts and equipment from a prehistoric time, or to put it another way, cutting edge technology that was all the rage in my youth. 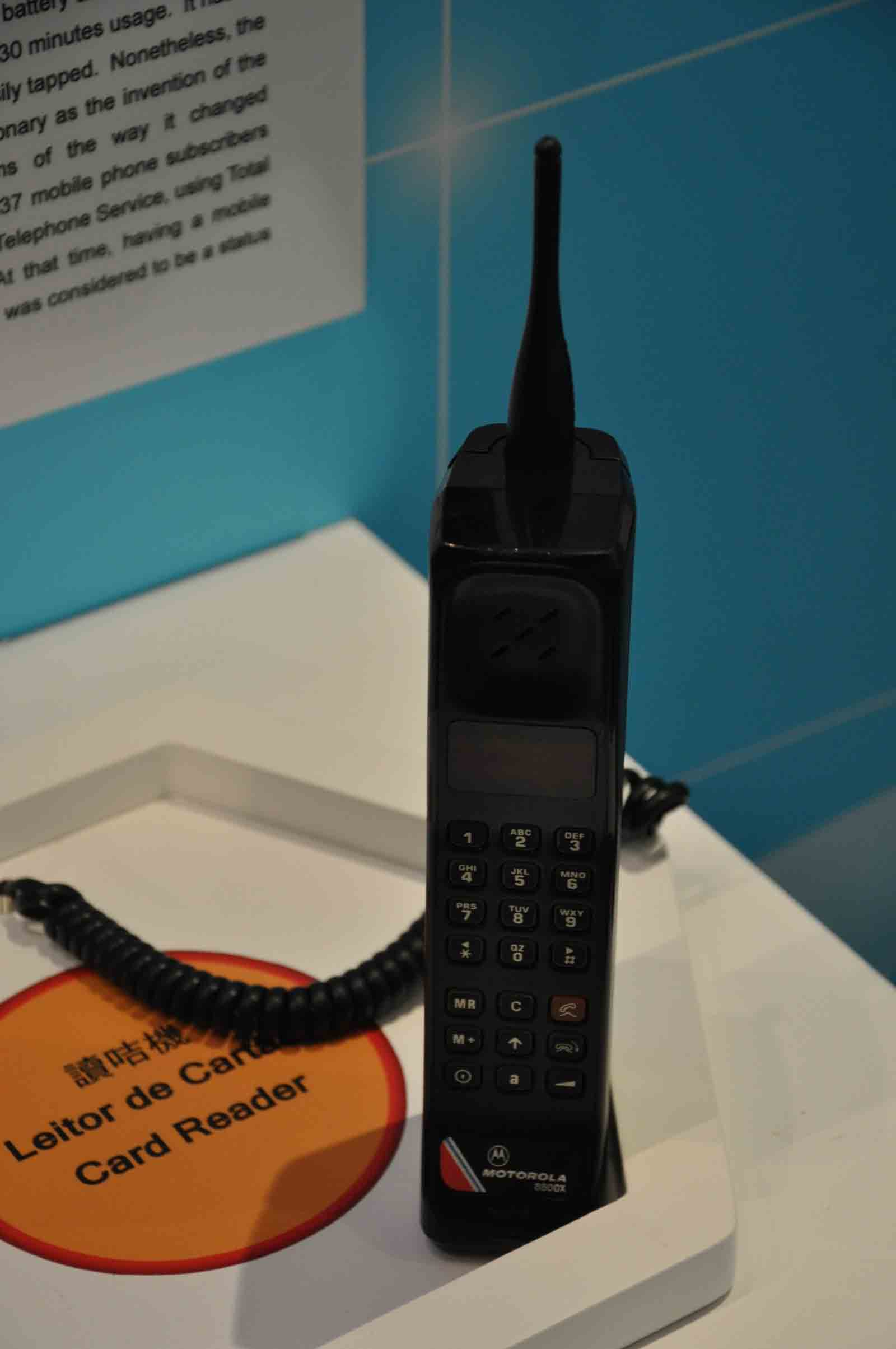 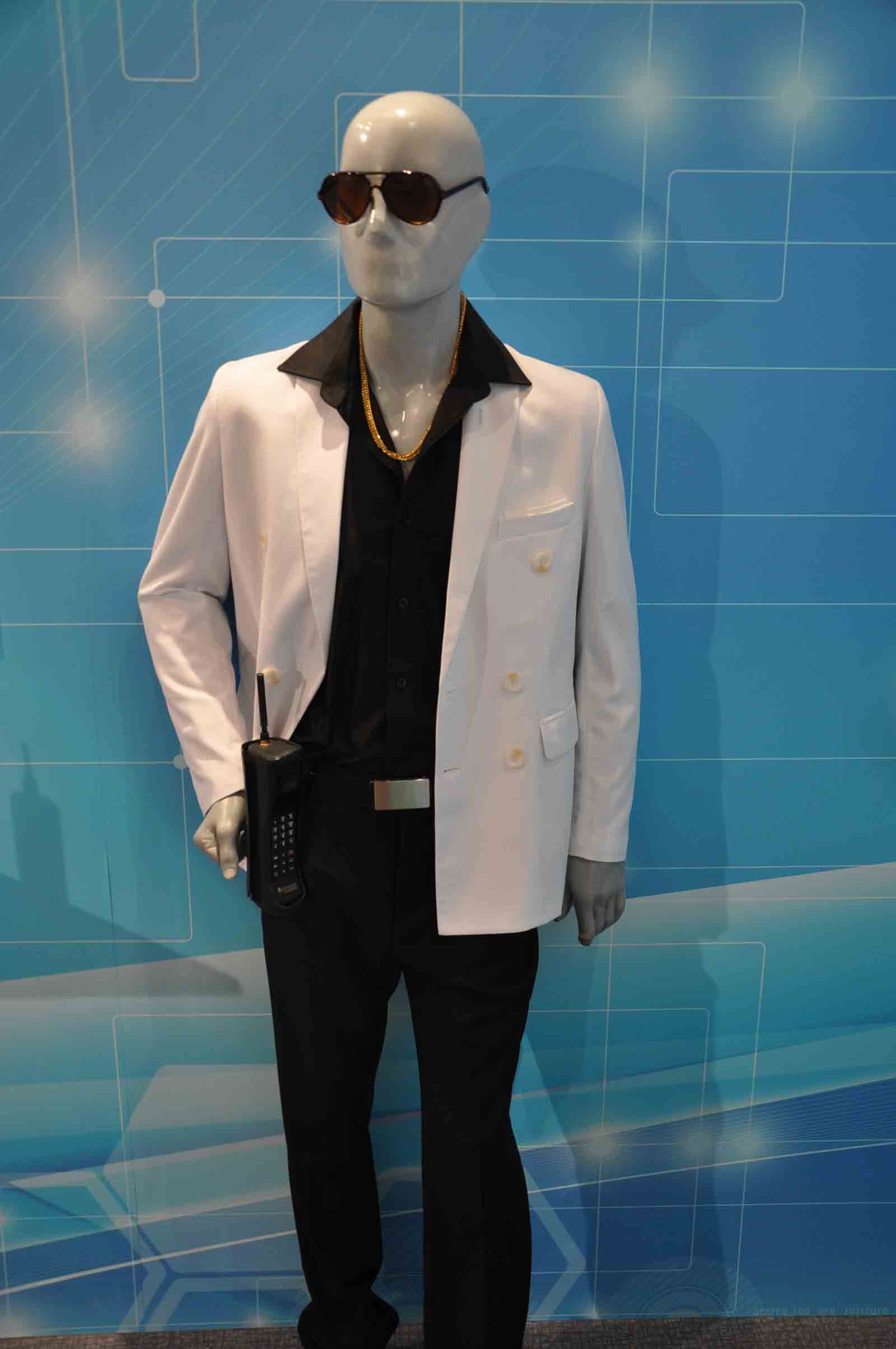 They had the first mobile phone that was ever made and that ridiculous piece of bulk must have been quite the burden for guys to carry around when they were trying to score in 1973.  (I guess when they told the ladies then that they were packing a big unit, they weren’t lying!)  Other things that blew my mind was seeing a floppy disc again (hello!) and the first Sony Playstation, which routinely robbed 9 hours a day of my life after the original NFL Gameday came out in 1995.  (Remember those ridiculous pop ups on the INTs or the play Quick Out?  Triangle was always open man!!) 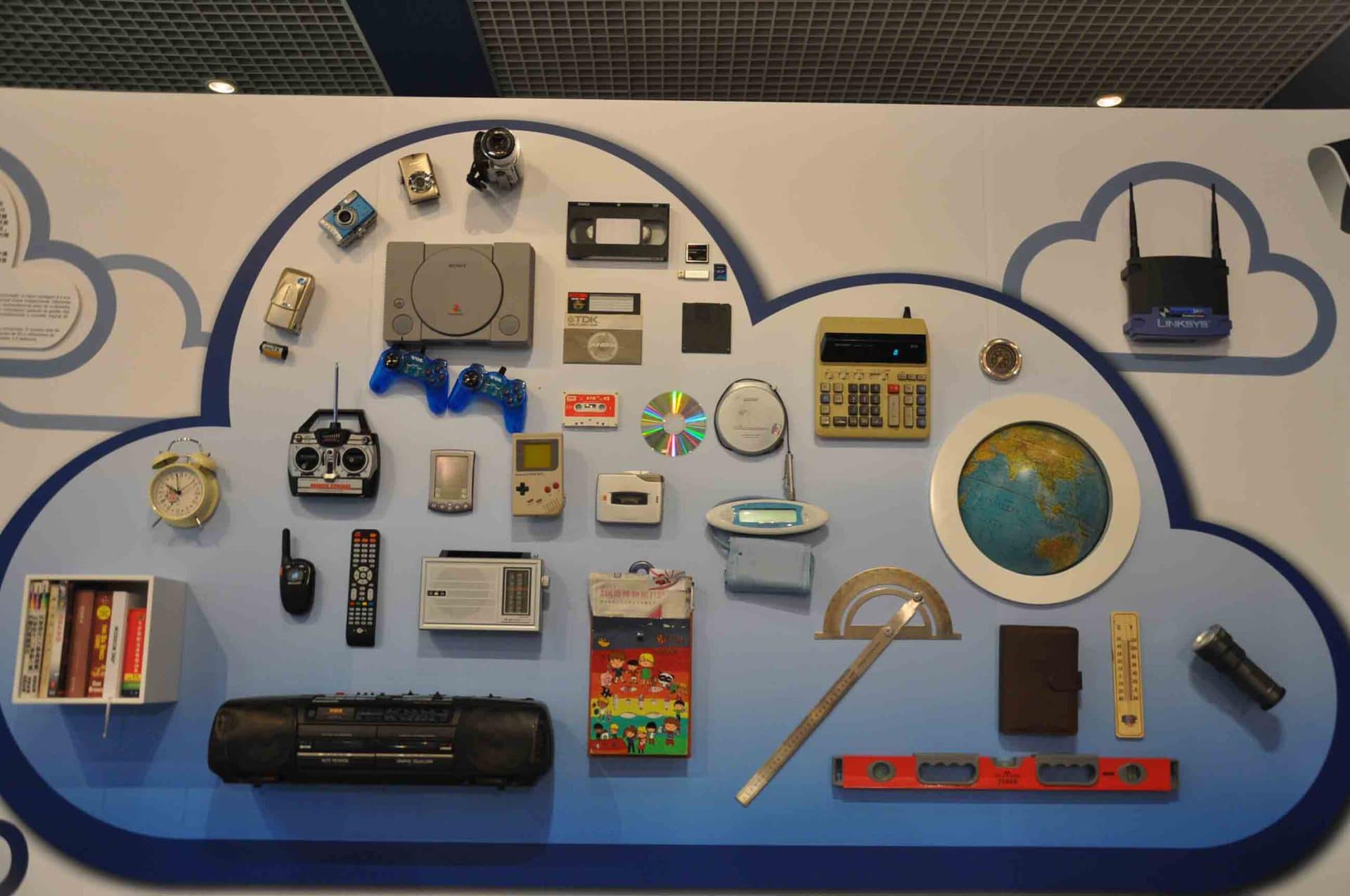 They also had ghetto blasters and Game Boys and globes and a bunch of other things people nowadays just keep stored in their attics and garages. 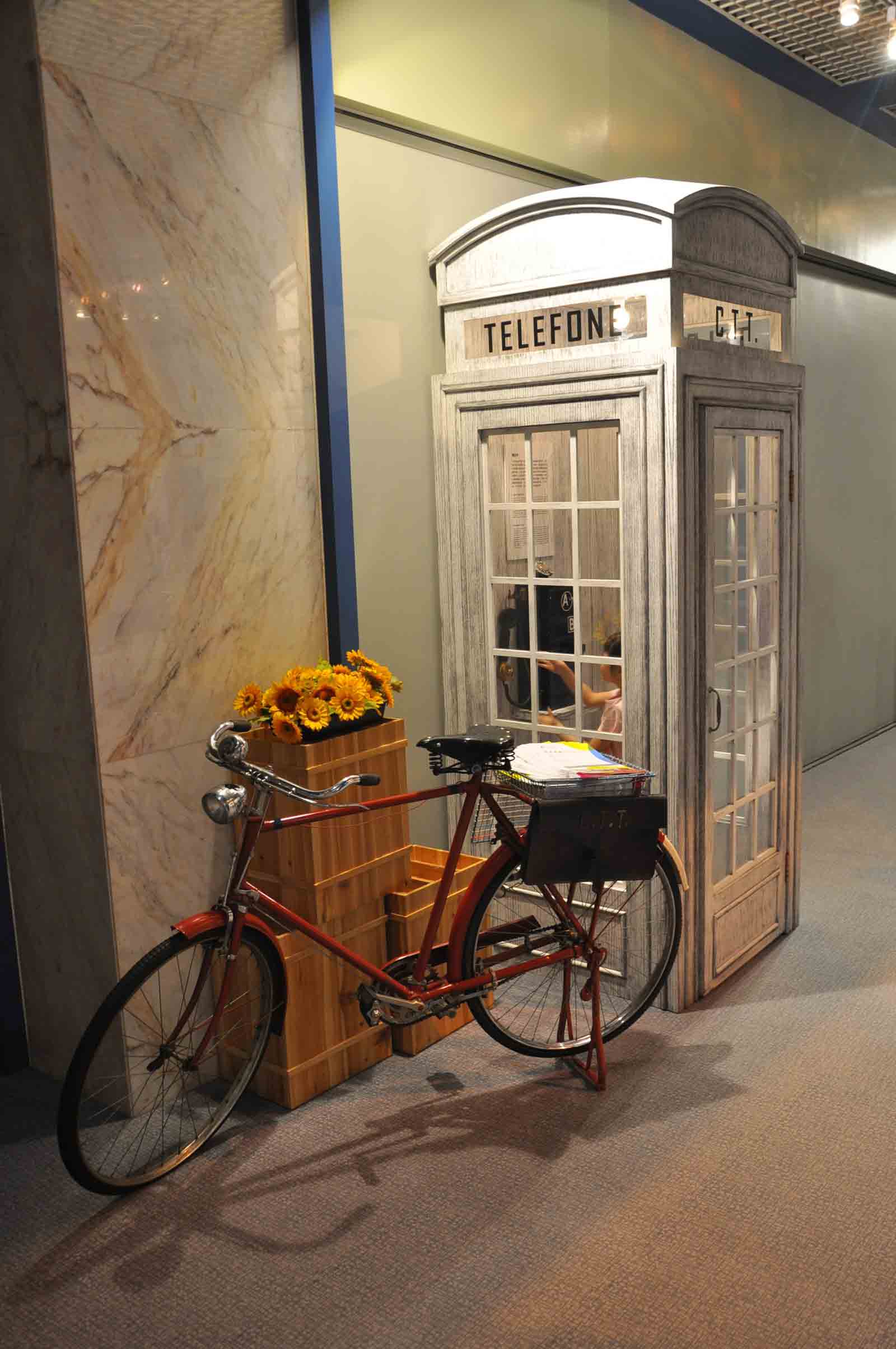 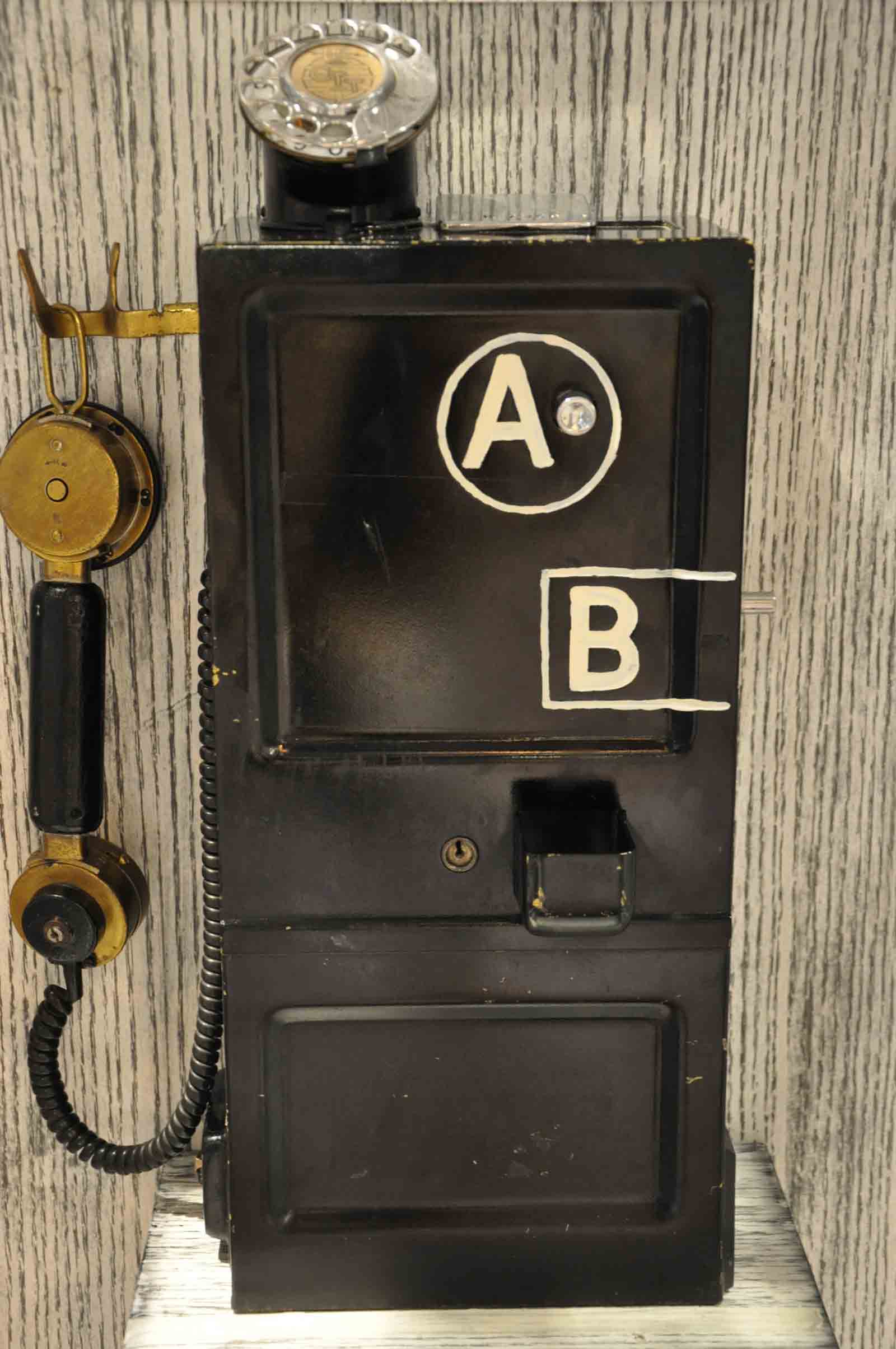 The antique phone booth was another highlight and I got a real kick stepping inside to use the old school rotary phone that went out of style in about 1985.  My family used to have a big black one and if you had a friend with a number like 822-1132, then you could make the call in about 3 seconds, but if there were a lot of 8’s or 9’s in the number, then watch out.  It seemed a call like that took four days to dial!

The 1st floor of the museum was a lot larger and more interactive.  Probably best enjoyed by children aged 8 to 12, I think they’d get a kick out of making their own postcard, playing around with the Flight Simulator, or doing cut and paste to make their own stamps. 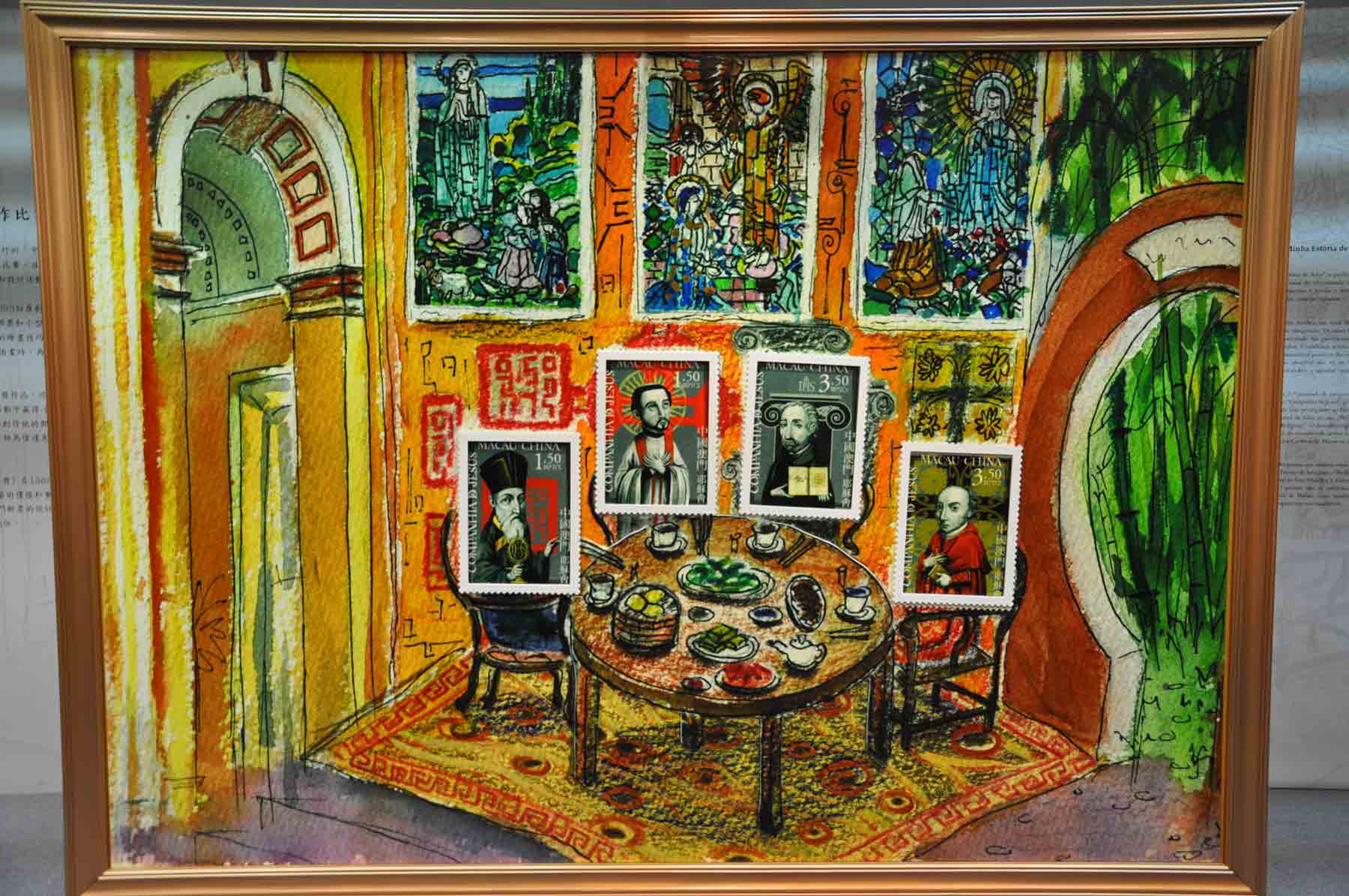 Macau has a lot of Kid Zones in big hotels like the Venetian and Galaxy, but the Communications Museum might be just as good, and more family friendly too in a way, since the parents can join in as well.  The morning I was there a couple of school trips were on, and all the kids seemed really into what they were seeing.  It was the same sort of deal as the Science Center two days before, where everything resembled a big play area and learning and science took a backseat to screaming and fun. 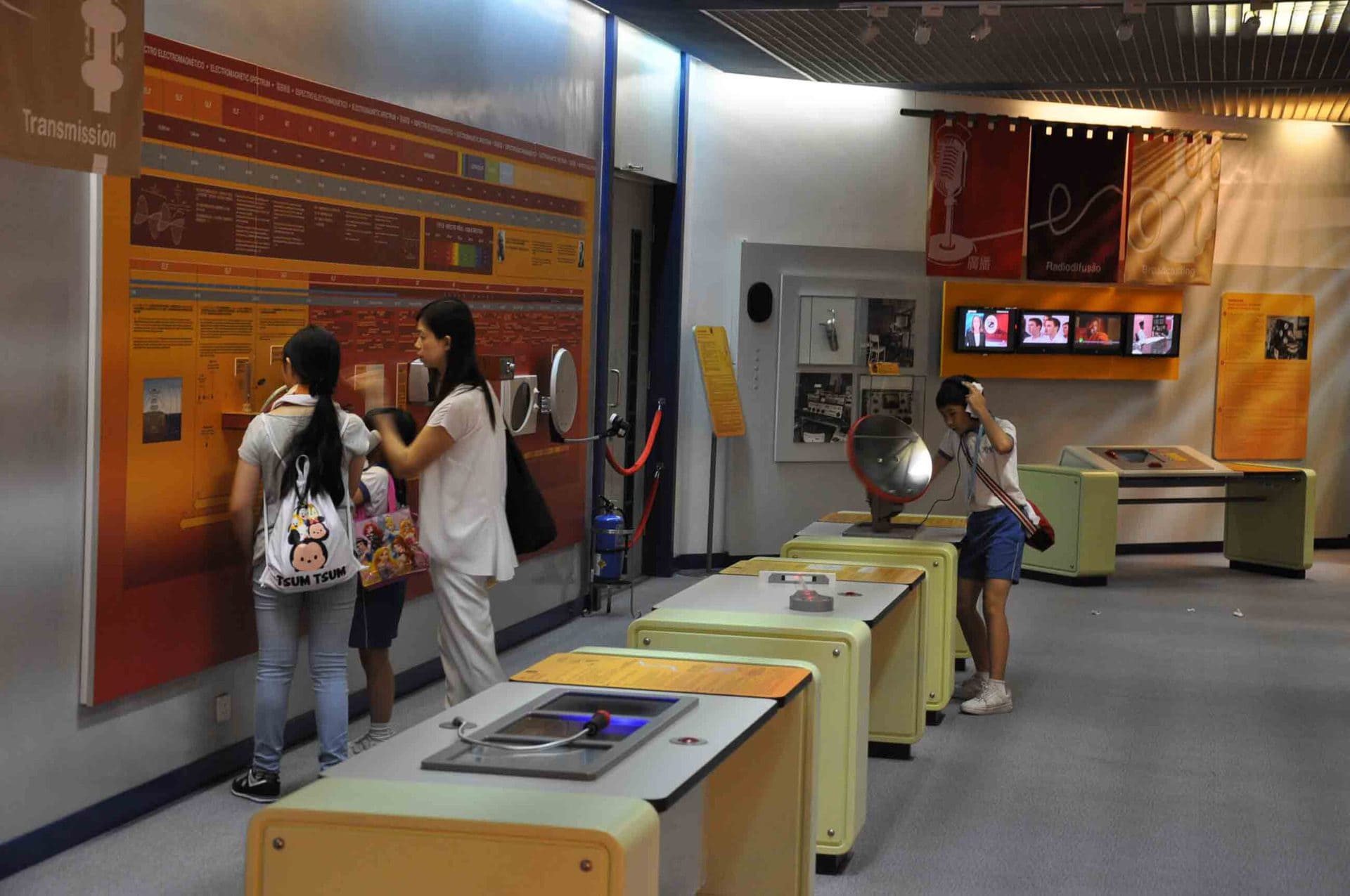 The 2nd floor was full of heavier topics like sound and resonance, information processing, and electrostatics.  This area was definitely more for adults and I enjoyed the Morse code machine the most. 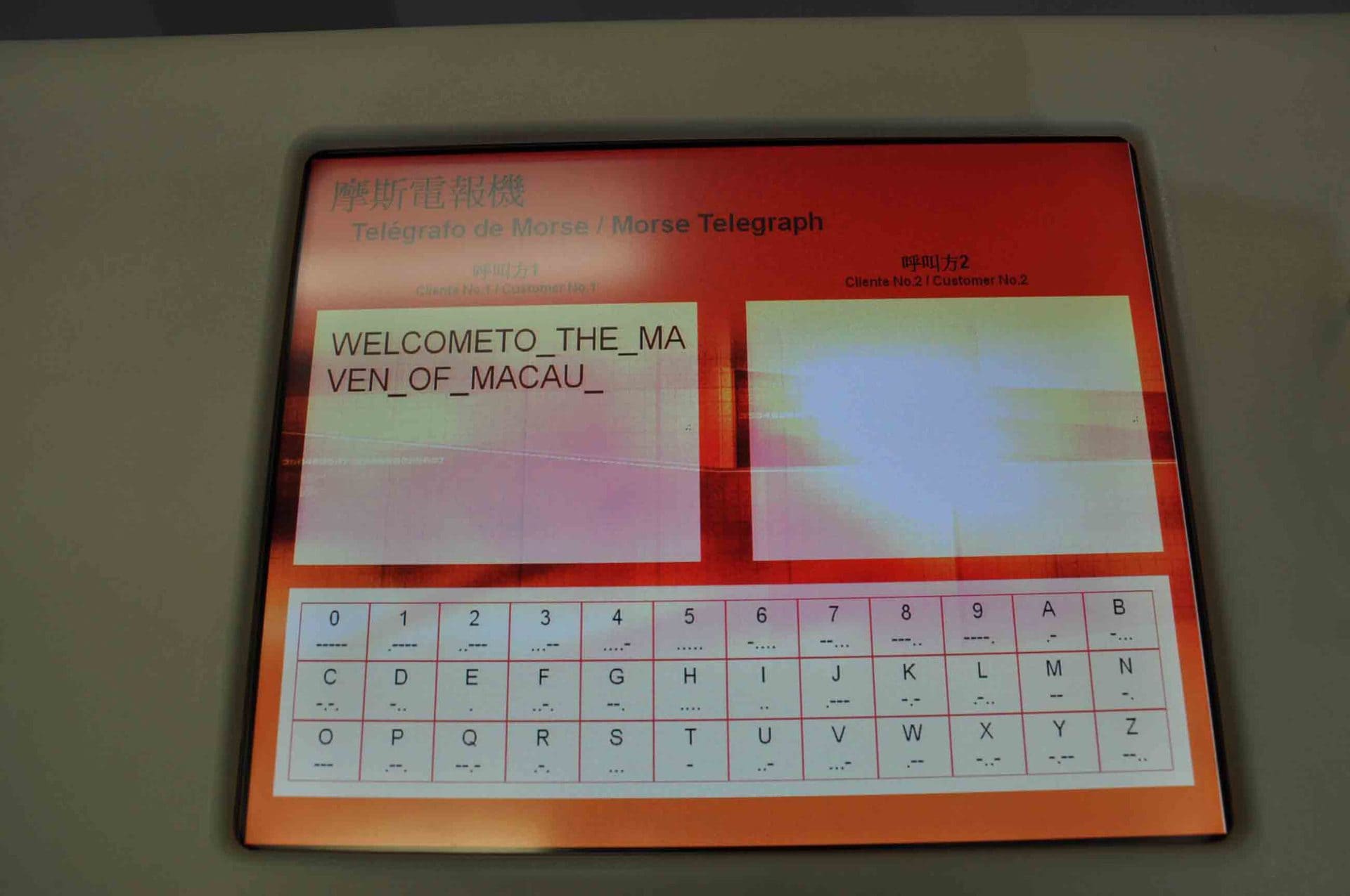 Although I can definitely fire off text messages a lot faster, sending things off in Morse didn’t take as long as I thought, and after playing around on it for about 5 minutes, I got pretty good.  The picture above shows something I typed out in code, although I messed up the spacing on the first two letters.

Much like the Science Center, I think the Communications Museum was built by the Macau government just so children in grade school have somewhere to go for class trips.  If you have kids that old, then it might be worth visiting, just be aware that it’s nowhere near the main tourist areas.  I’d imagine taking a taxi to and from would be the only way to do it.