On April 28th 2012, three different festivals were held in Macau: the Feast of Drunken Dragon Festival on Macau peninsula, the Bathing of the Lord Buddha Festival in Taipa and the Tam Kong Festival in Coloane.  Due to visa regulations, Mu Yi had to stay at home for this one, so Qi Meng and A Ping joined the party instead. 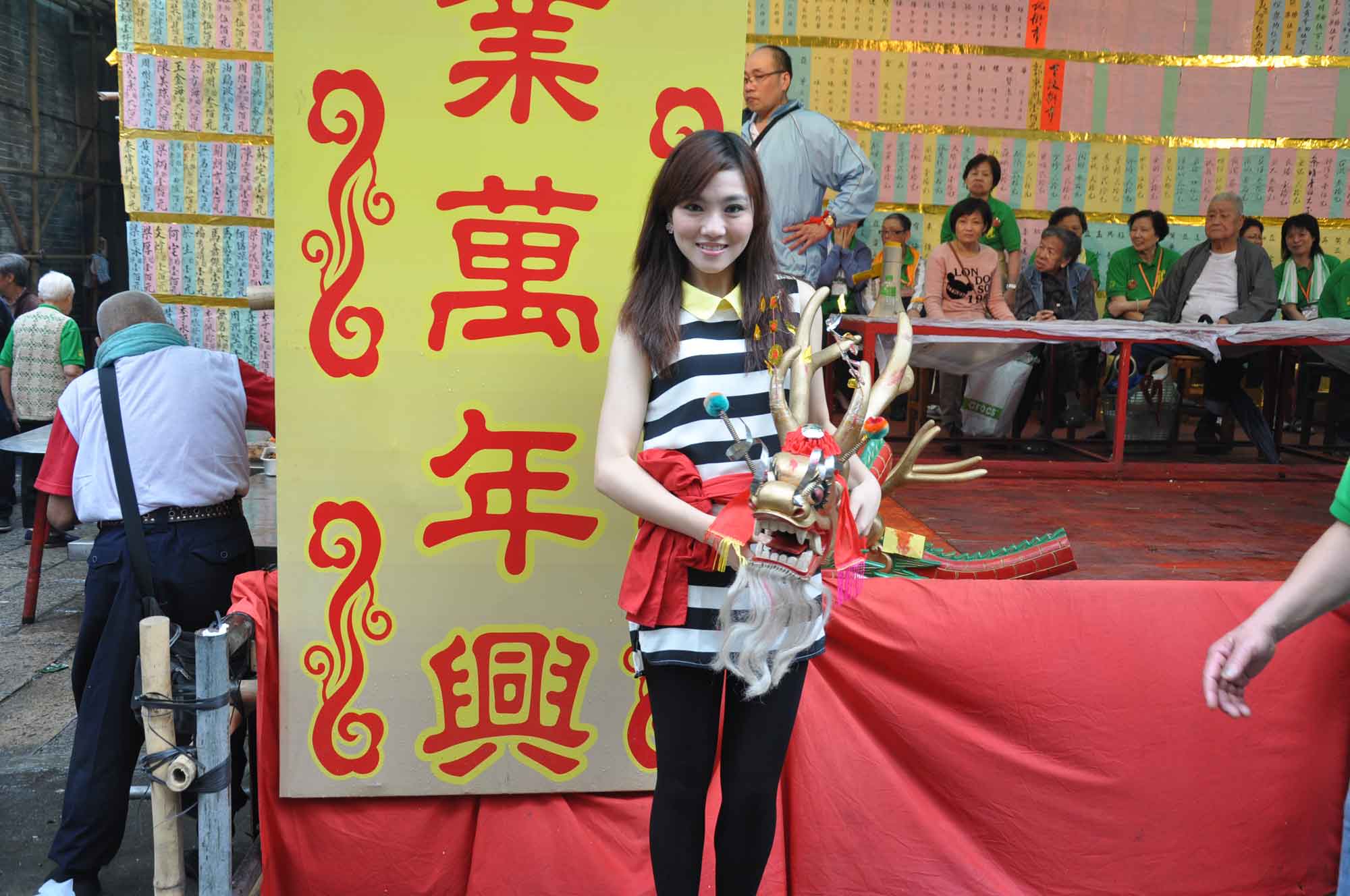 The following is the story of our day there.

Macau has a lot of festivals but none of them are like the Feast of the Drunken Dragon.  Scores of fishermen wearing red bandanas and belts make their way through the streets, drinking and dancing, carrying wooden Dragons, blessing local shops, before finishing their day at the Inner Harbour where they enjoy a great feast. Sounding very much like my idea of a good time, especially if I could join in too, I decided this was the first Macau festival I had to see. 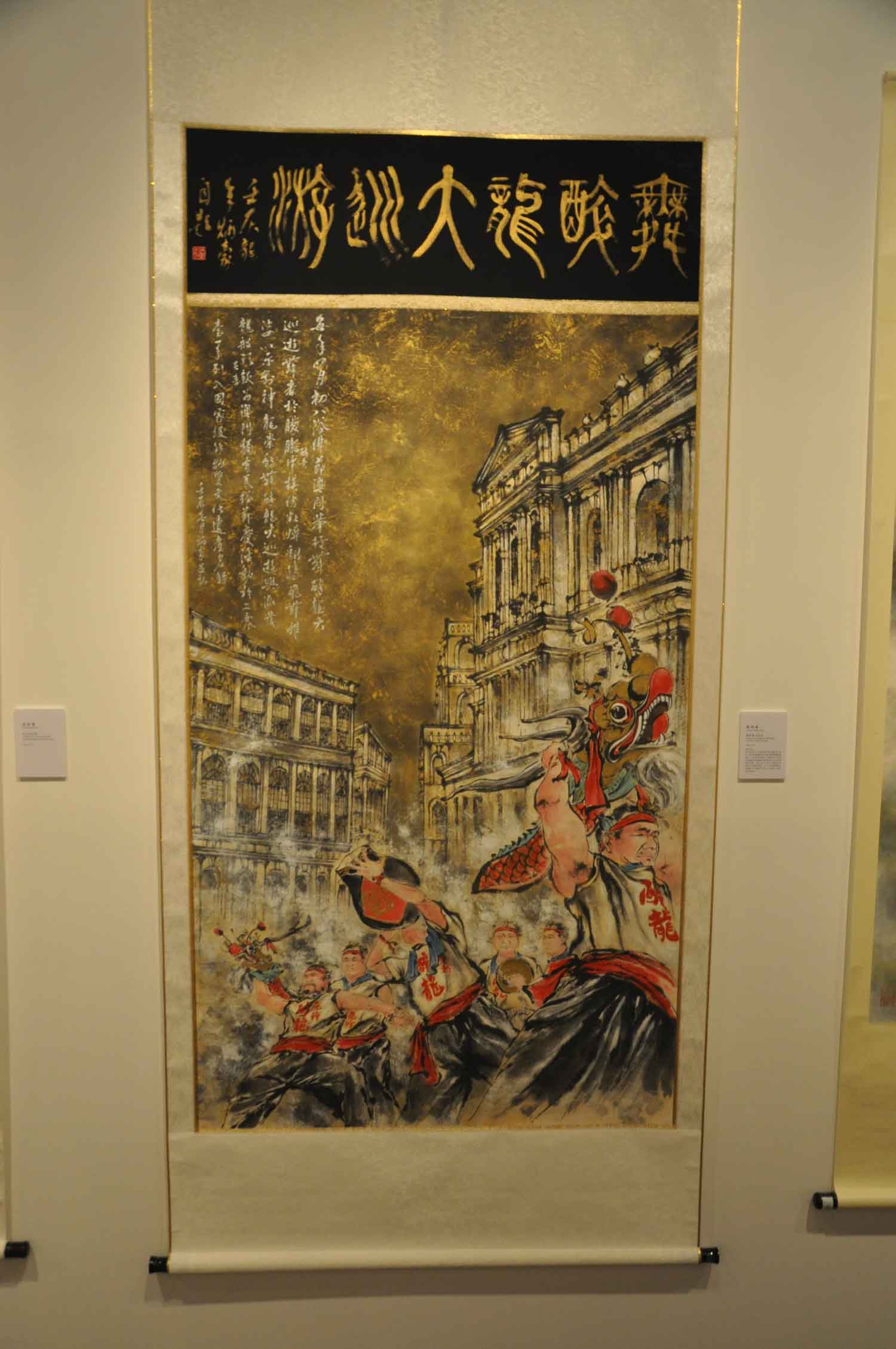 The festival originates from the time of Kangxi in the Qing Dynasty, when a group of villagers were carrying a statue of Buddha through the town streets.  They were in the midst of a great plague and were praying to Him to end it.  Suddenly a giant python leapt out of the river and on to the road in front of them blocking the way.  A Buddhist monk killed the serpent, cutting it into three pieces, which were then thrown into the river.

Miraculously, the three pieces did not land in the river, but flew up into the sky instead, accompanied by great wind and thunder.  Soon after, the townspeople recovered from the plague, and the ground which got soaked with the snake’s blood became exceptionally fertile.  The townspeople believed they had been saved by a divine Dragon, and every year on the day when the Buddha is bathed, they pay homage to the Dragon by carrying his image around town and drinking and dancing on the streets.

The Macau fishermen and their various associations put on Macau’s version of this event, which started around 9 am in Senado Square.  I usually don’t buy into myths about magic serpents flying into the air and blood fertilizing sterile ground, but something strange happened around 8:50 am right before the festival was set to start.  It had rained terribly all day on the 27th, all that morning on the 28th, and as we trudged unhappily under our umbrellas down San Ma Lo thinking our day was ruined before it even started, the grey skies around Macau subsided, the rain stopped, and the sun came out.  No word of a lie, just like that, the weather turned and our fortunes changed.  It was as if the Drunken Dragon had blessed us already, and the festival hadn’t even started yet!

There was a performance area set up in Senado Square along with an elevated stage where several local dignitaries and people of power were seated.  A fairly large crowd of people had gathered as well, but most found it difficult to get a clear view of the proceedings, unable to see through the mass of shoulders, bodies and outstretched cameras.  I was able to push my way close to the front to get a good look but neither A Ping nor Qi Meng could see much at all.

At about 9:30 the festival began when about 20 fishermen lined up to do the traditional Dragon Dance.  Accompanied by loud piercing drums, cymbals and other instrumentation, the dance was a duet between long clothed costumed lions and men holding wooden dragons. 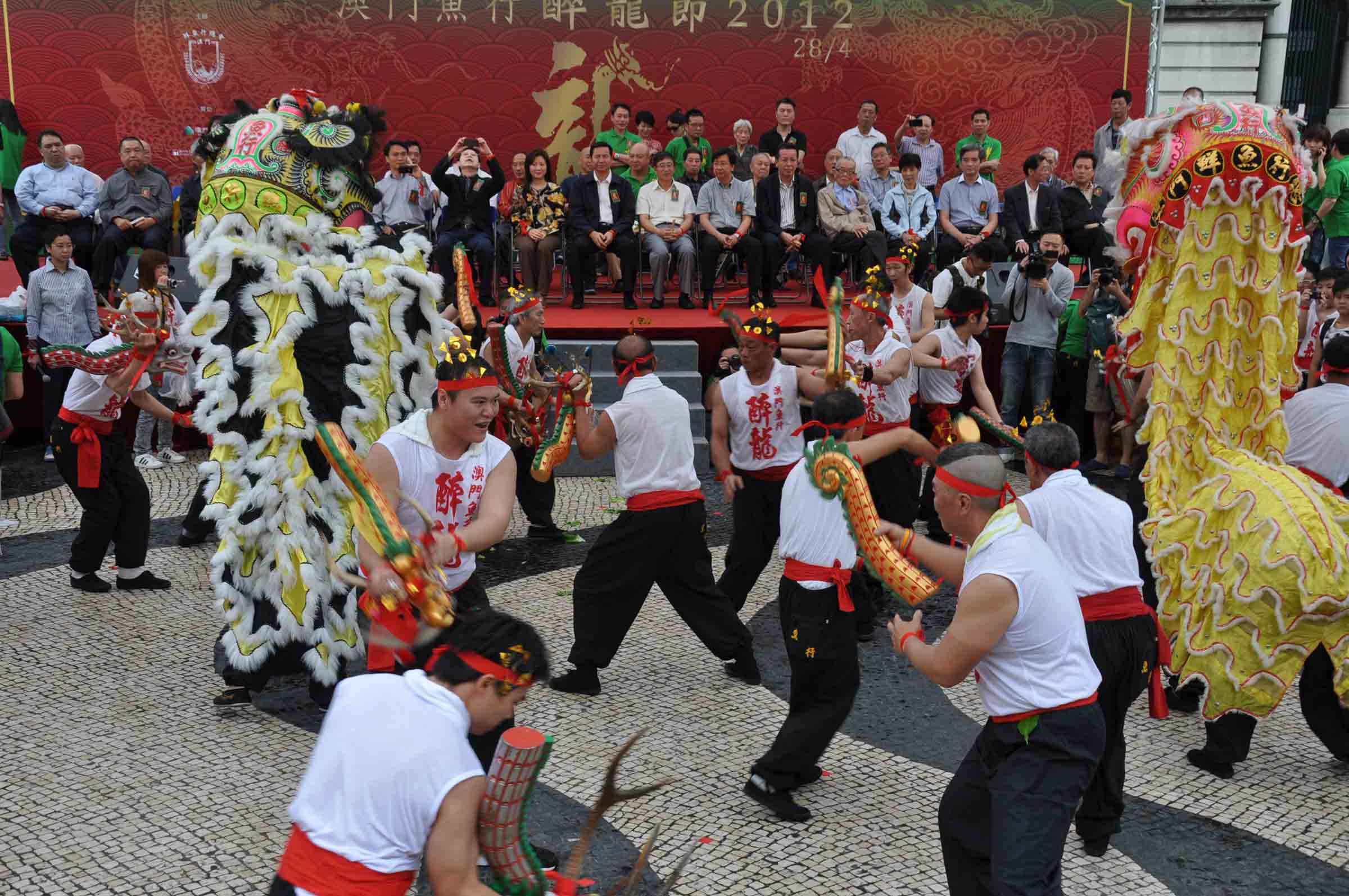 For fishermen I guess they did pretty well but it’s not like any of them will ever be confused for the second coming of Michael Jackson.  For the most part, they just moved around in circles, bobbing and weaving, while sometimes elevating their wooden Dragon high into the air.  This dance is repeated on many weekends throughout the year in Macau, so just visit any tourist office for information on performance times and places. 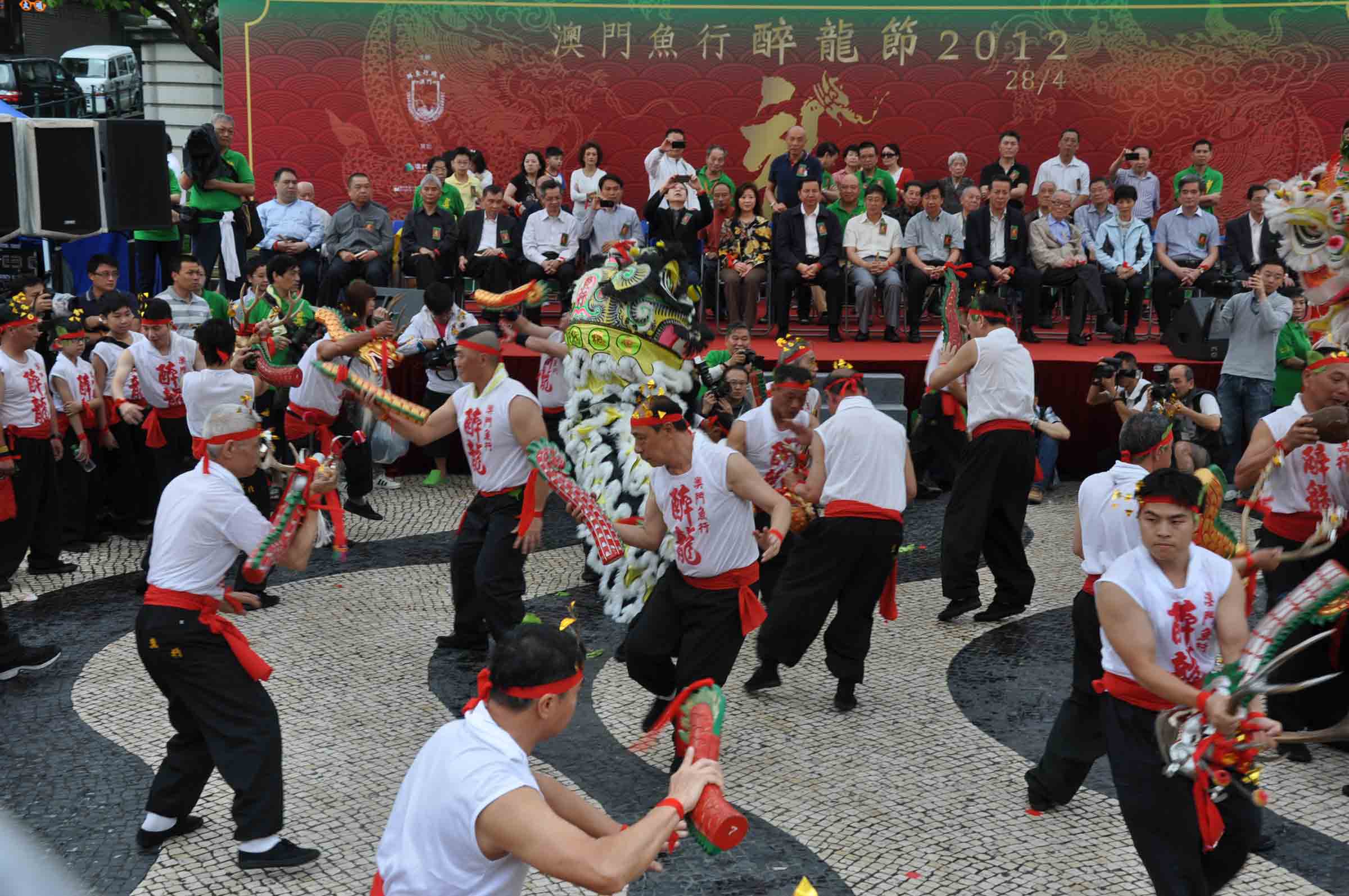 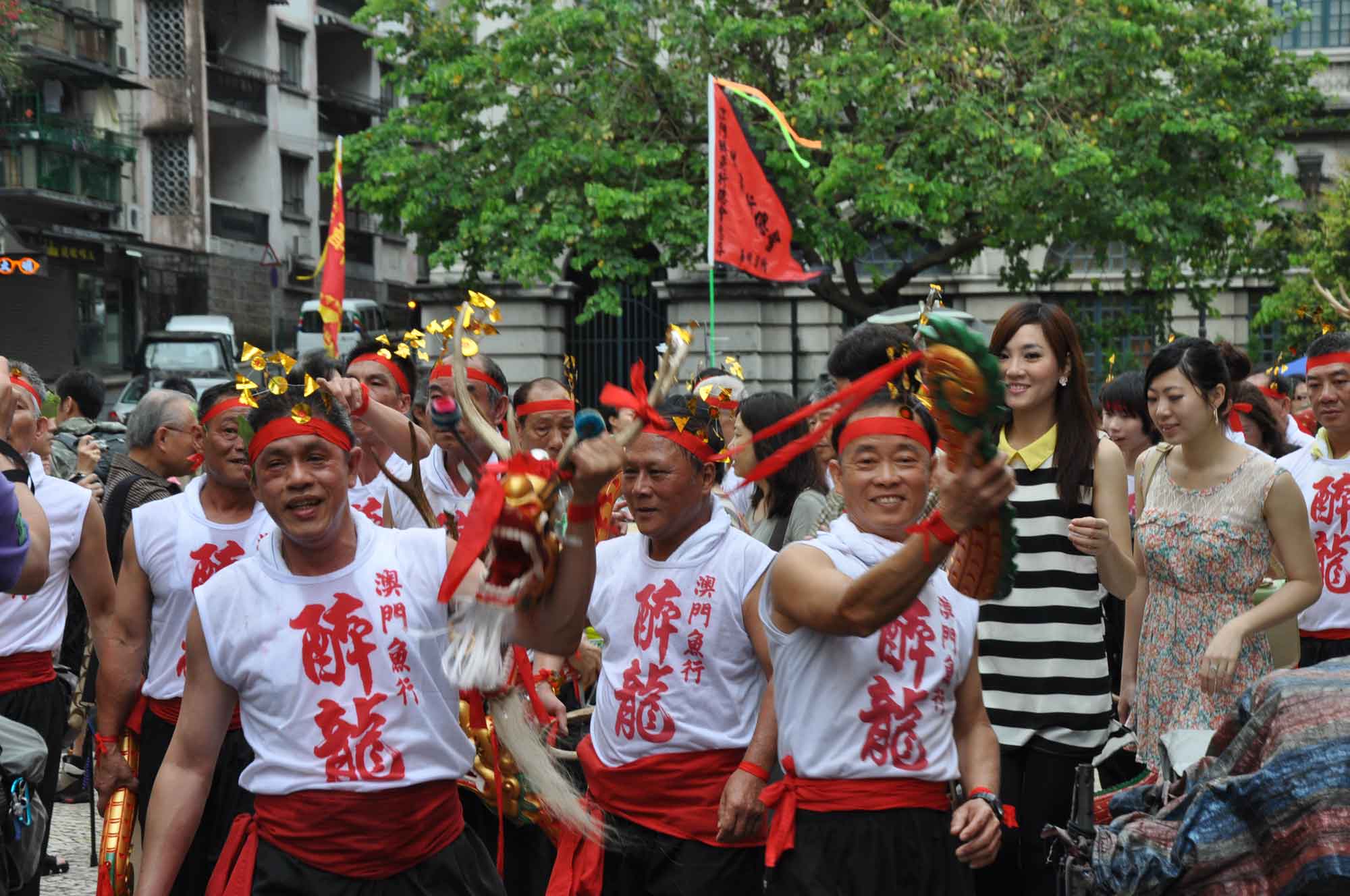 Here the festivities picked up a notch and the fishermen really seemed to get into it.  They clamored together in groups for photo shoots, struck some great poses and also took pictures with pretty onlookers, with Qi Meng and A Ping among the lucky ladies. 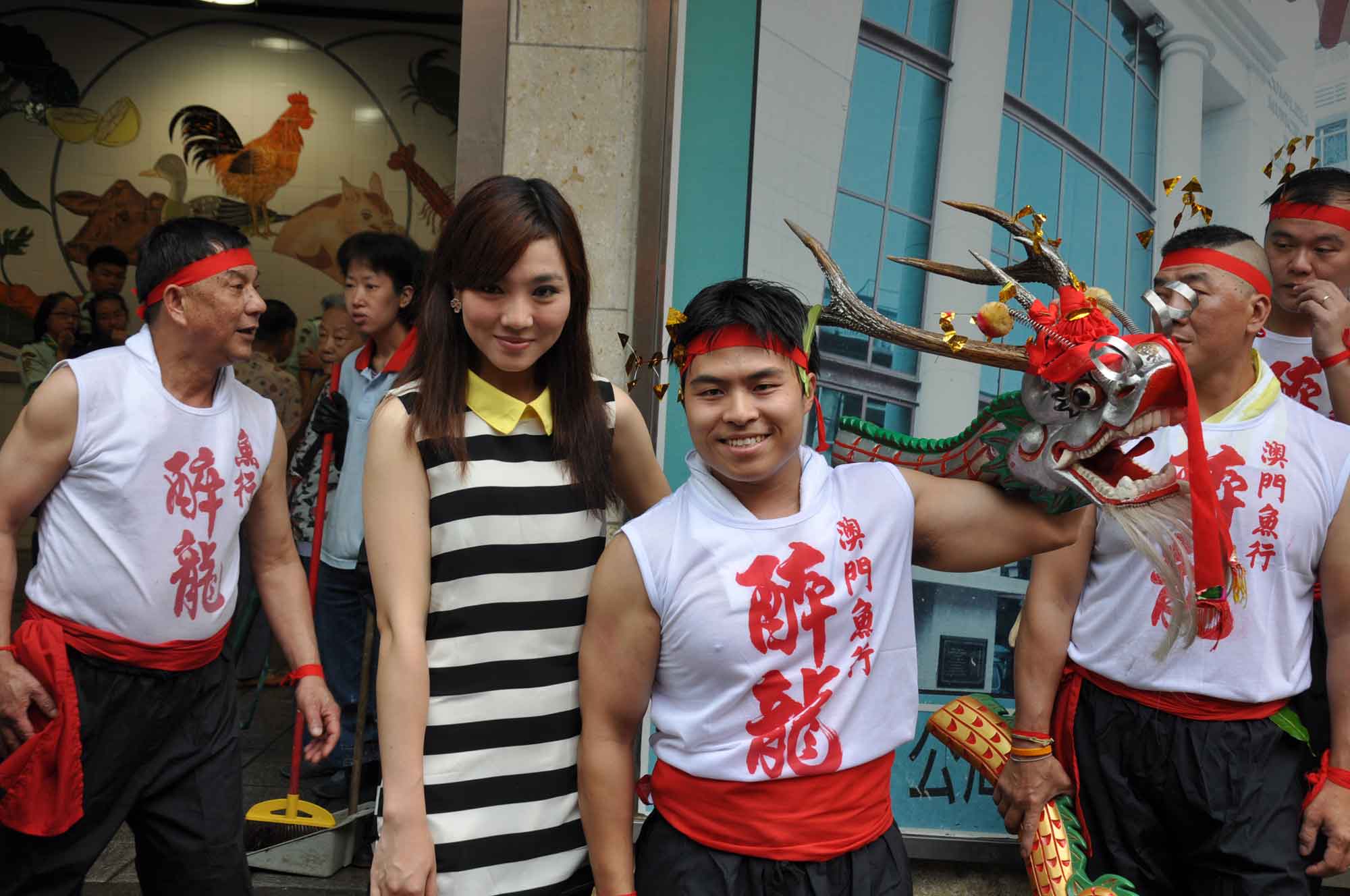 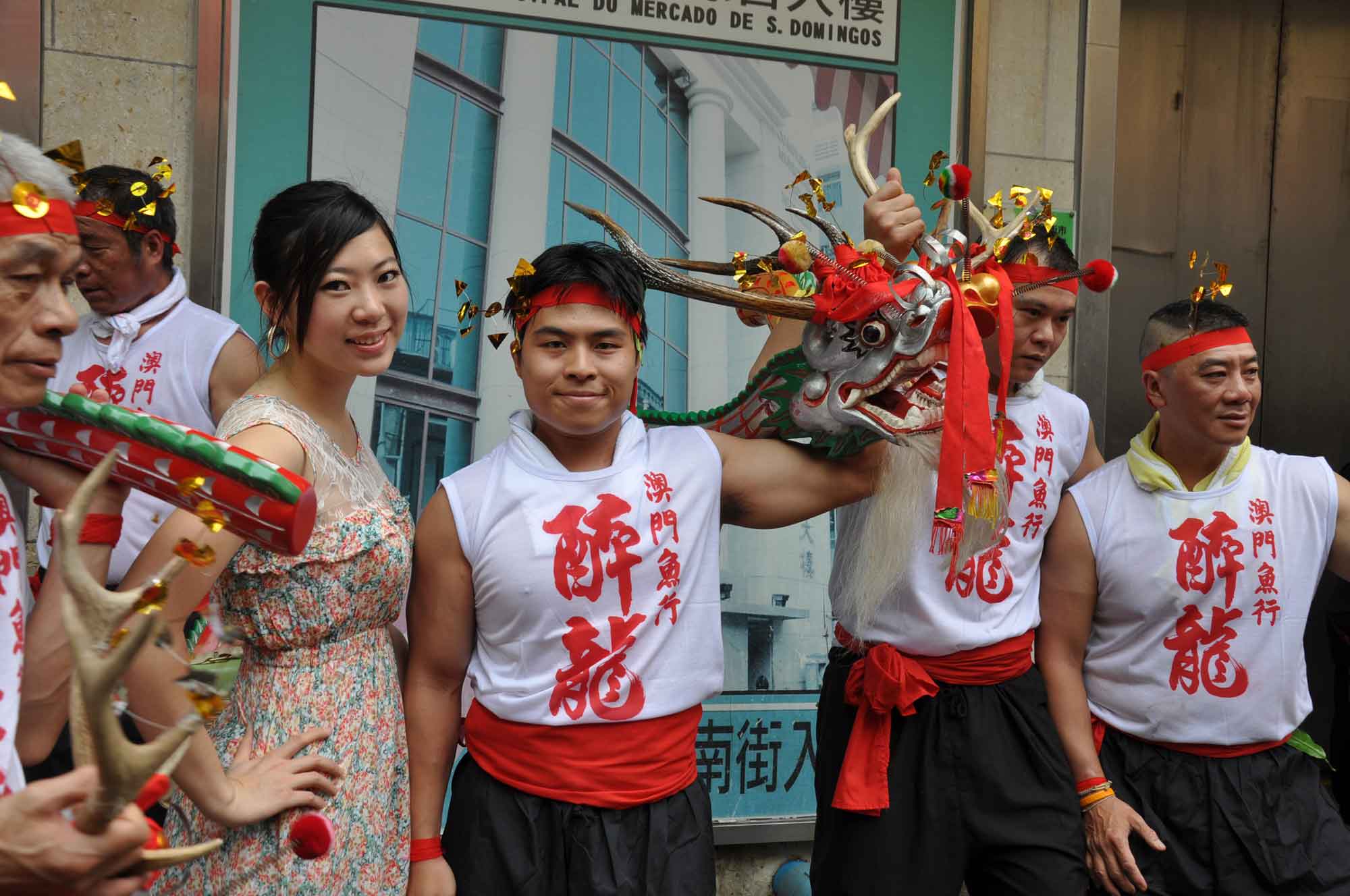 Our two girls even took center stage after I handed them a wooden dragon prop I stole from the back of a truck.  As soon as they held it up, they were immediately besieged by a mob of cameras and flashing lights. 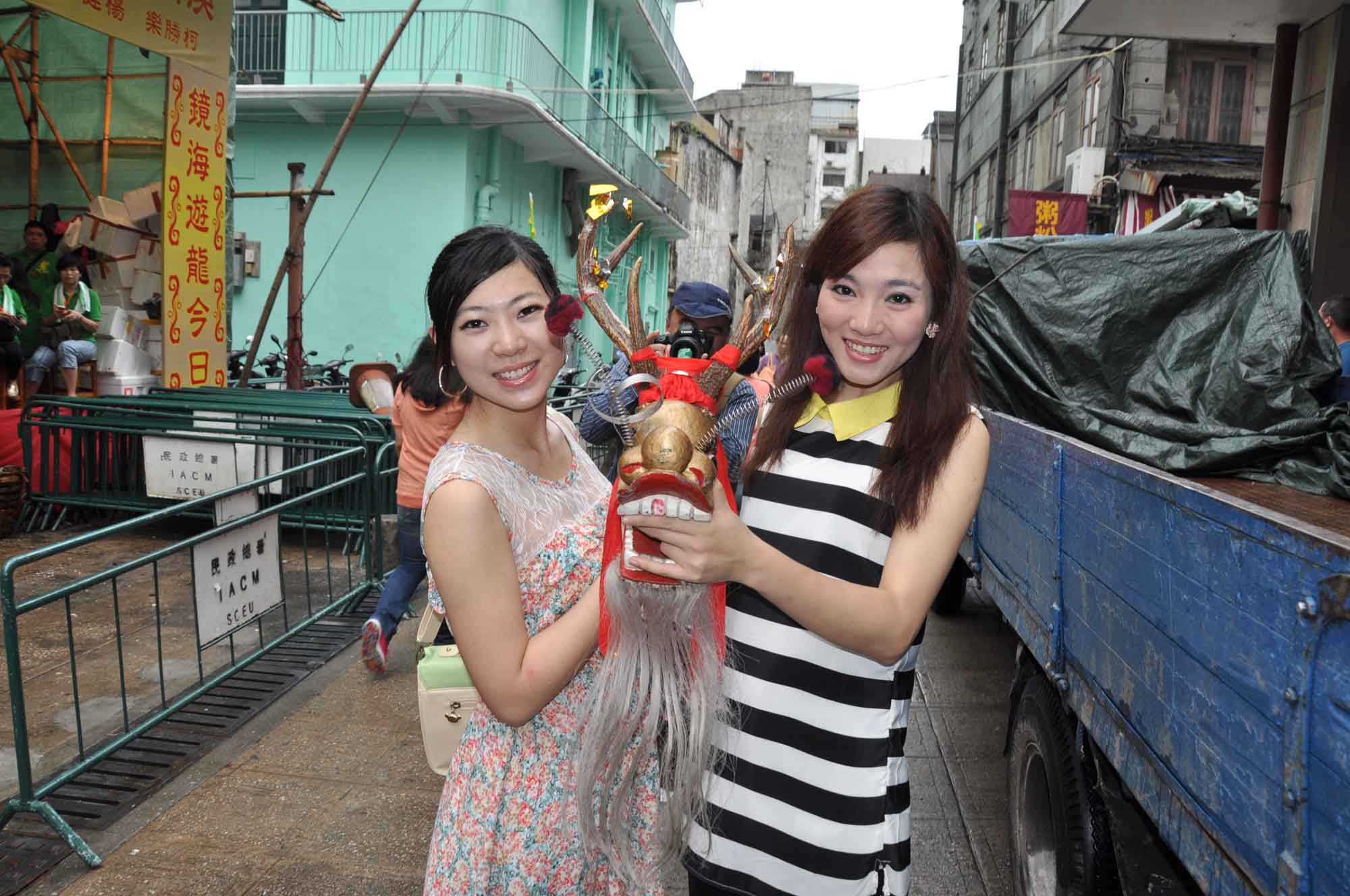 The same thing happened again a little later when they both posed wearing a red belt. 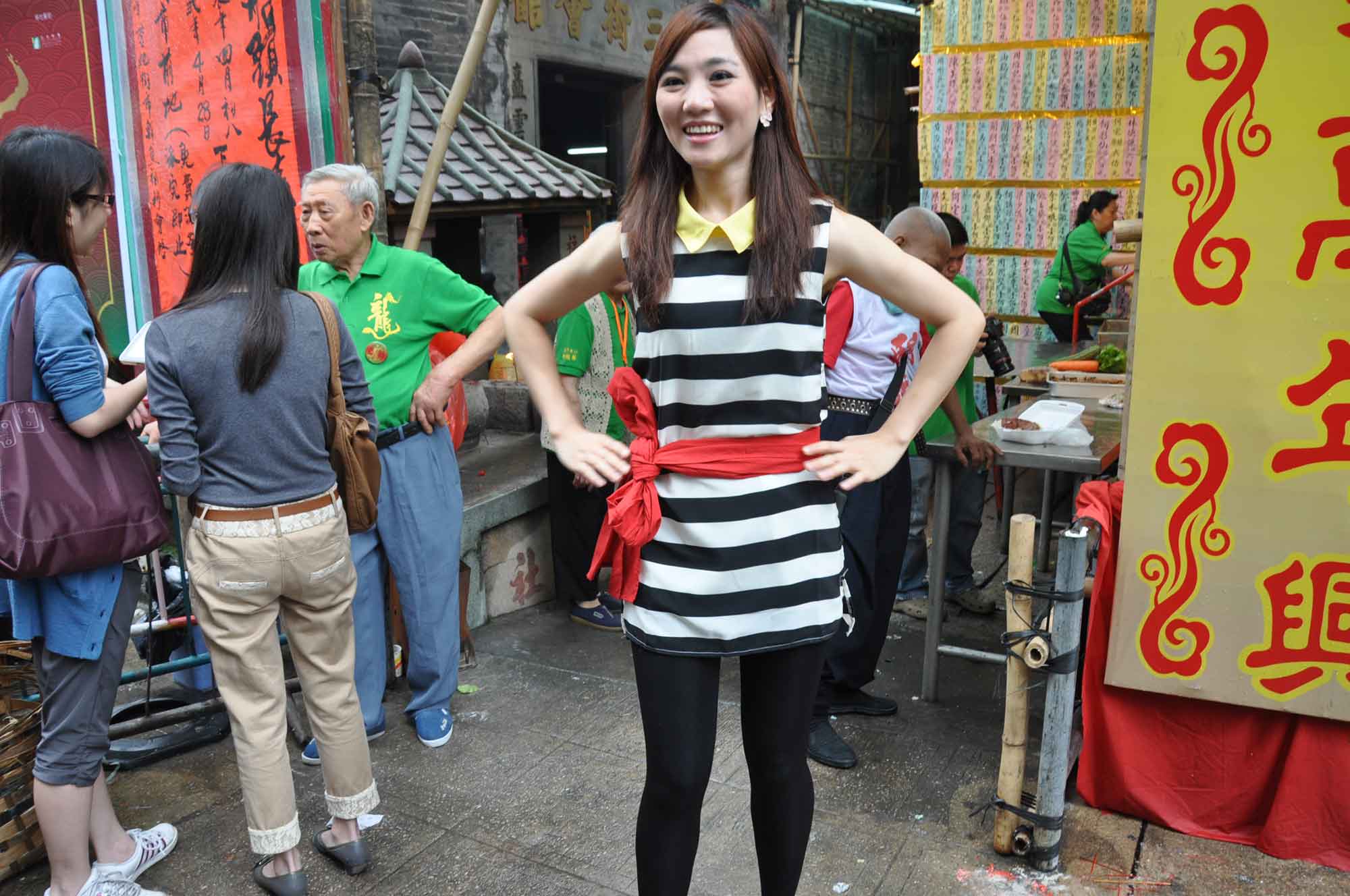 A paparazzi suddenly emerged from nowhere and I couldn’t even get a clear shot of my own models. 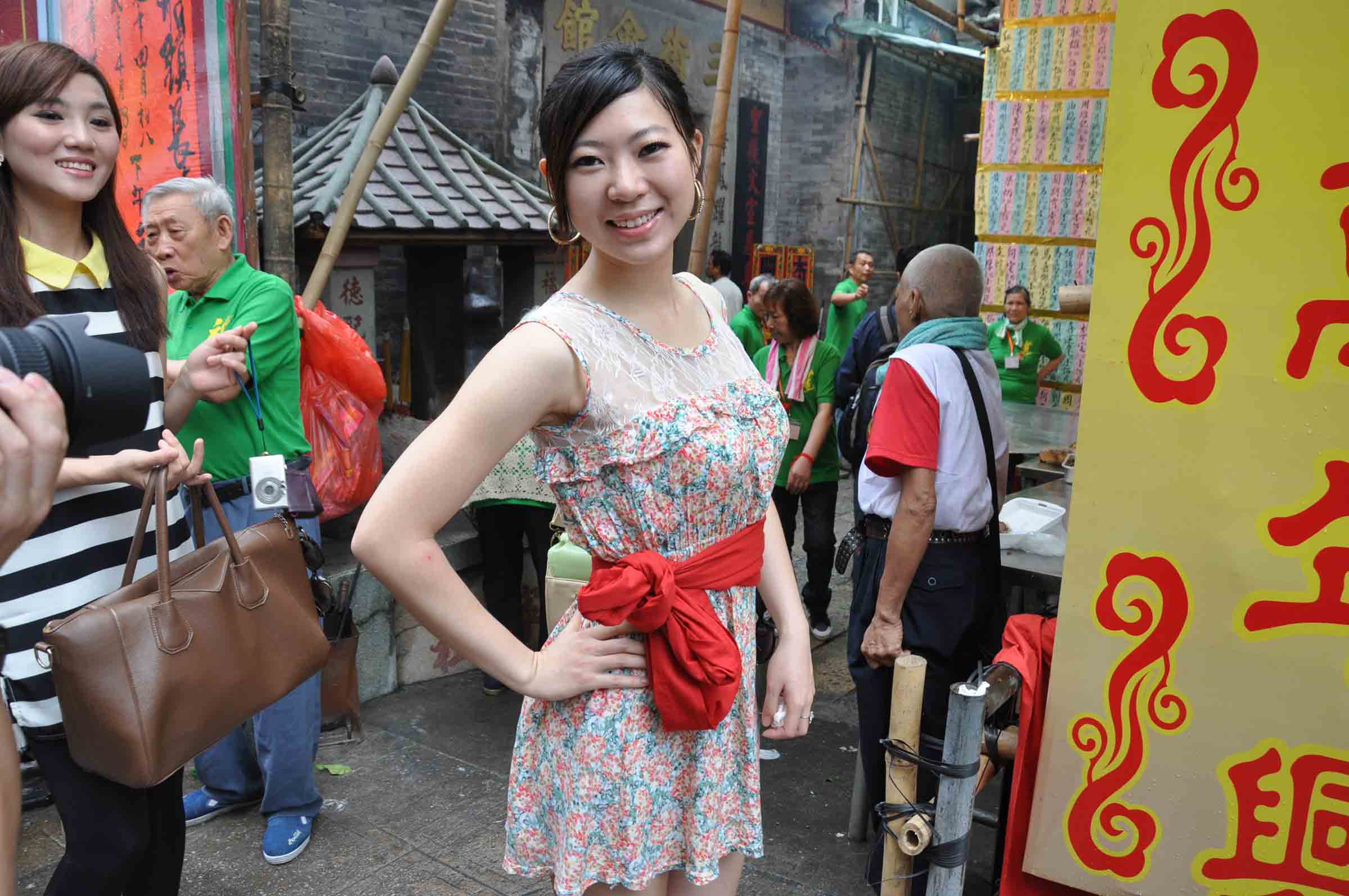 It was at this point outside of Kuan Tai Temple that the fishermen put the Drunk into the Drunken Dragon festival.  A ceremonial flask was passed around and each man took a drink from it, with some spitting the alcohol back up into the air, creating a furious storm. 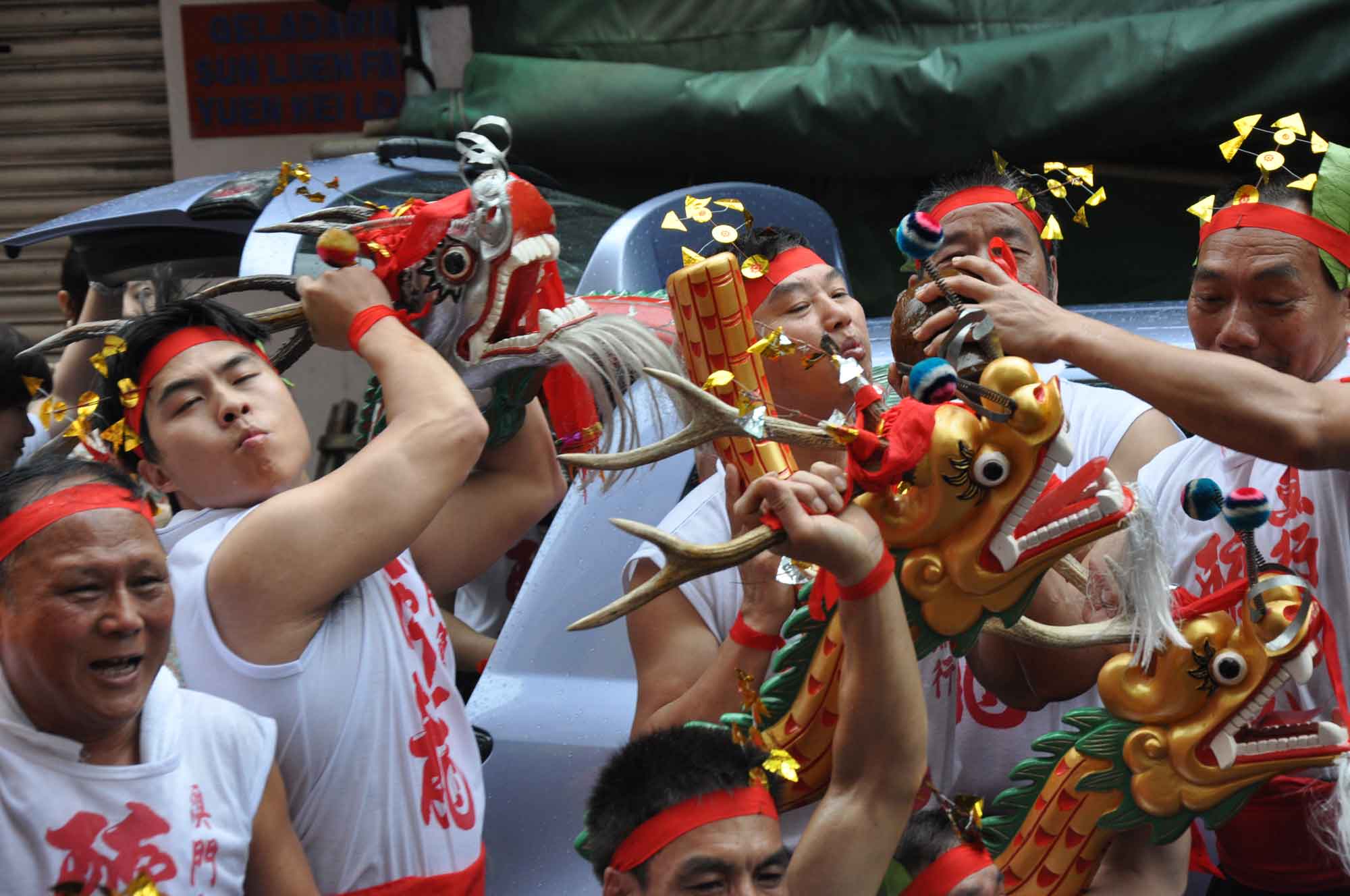 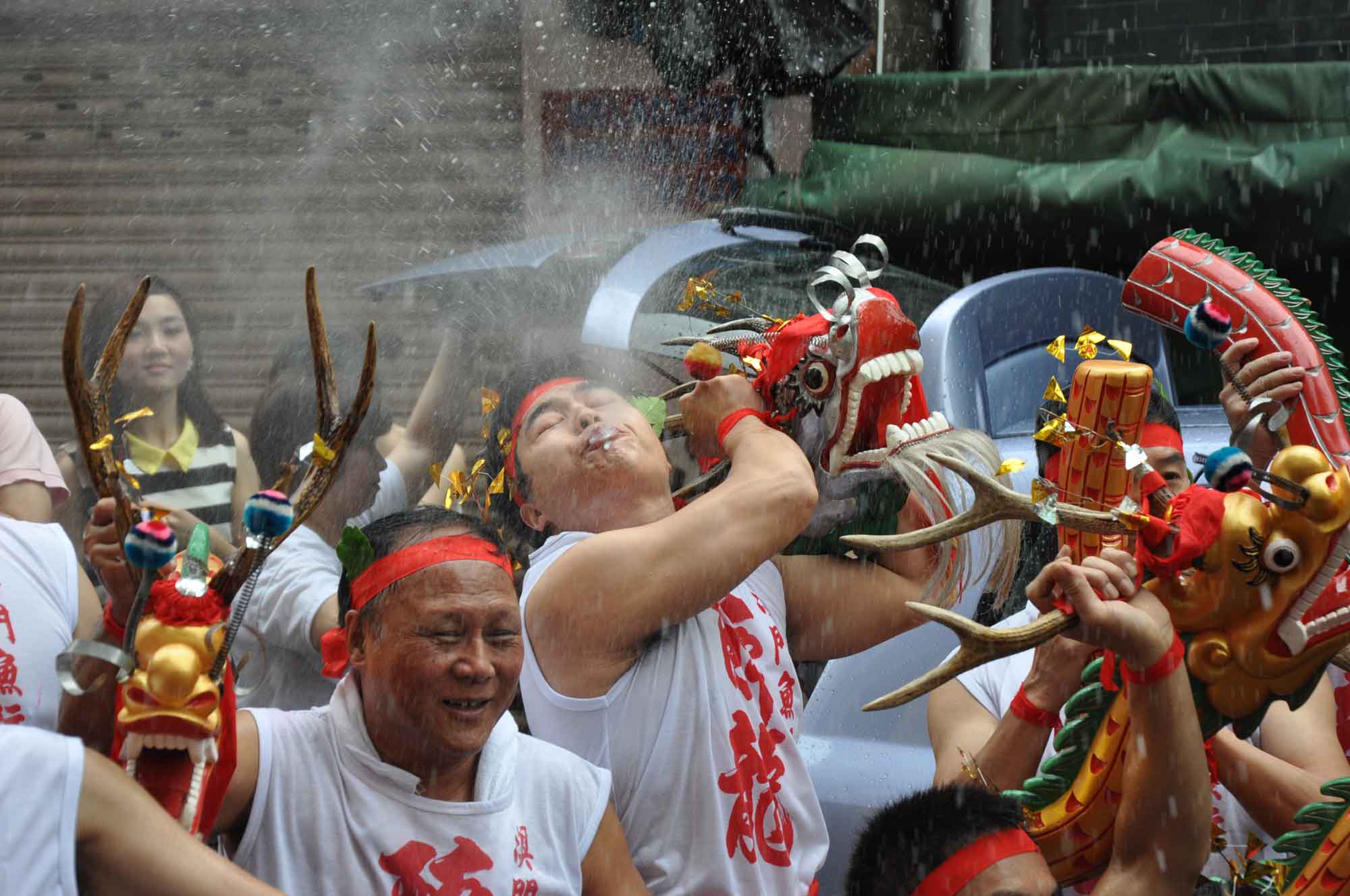 Surprisingly this was the only time during the day that we saw anybody drinking anything.  I came in expecting there to be wild processions full of excess and street debauchery, but to the fishermen’s credit, they kept it together.  After each man finished drinking, they left for other parts of Macau, and we set off for Taipa to visit the Bathing of the Lord Buddha Festival. 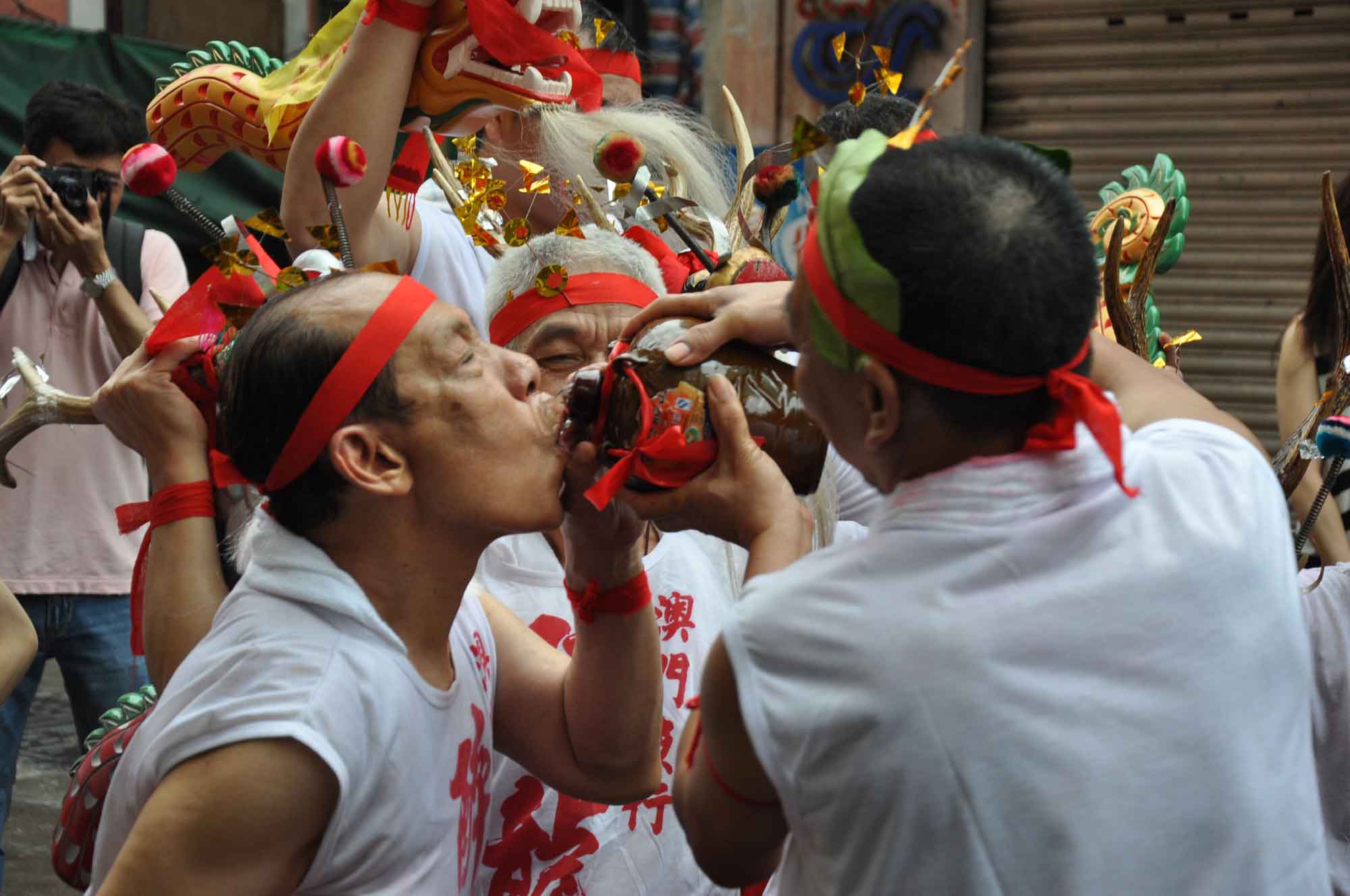