The following day we all gathered again to watch the big race, which got underway at 3:30 pm. 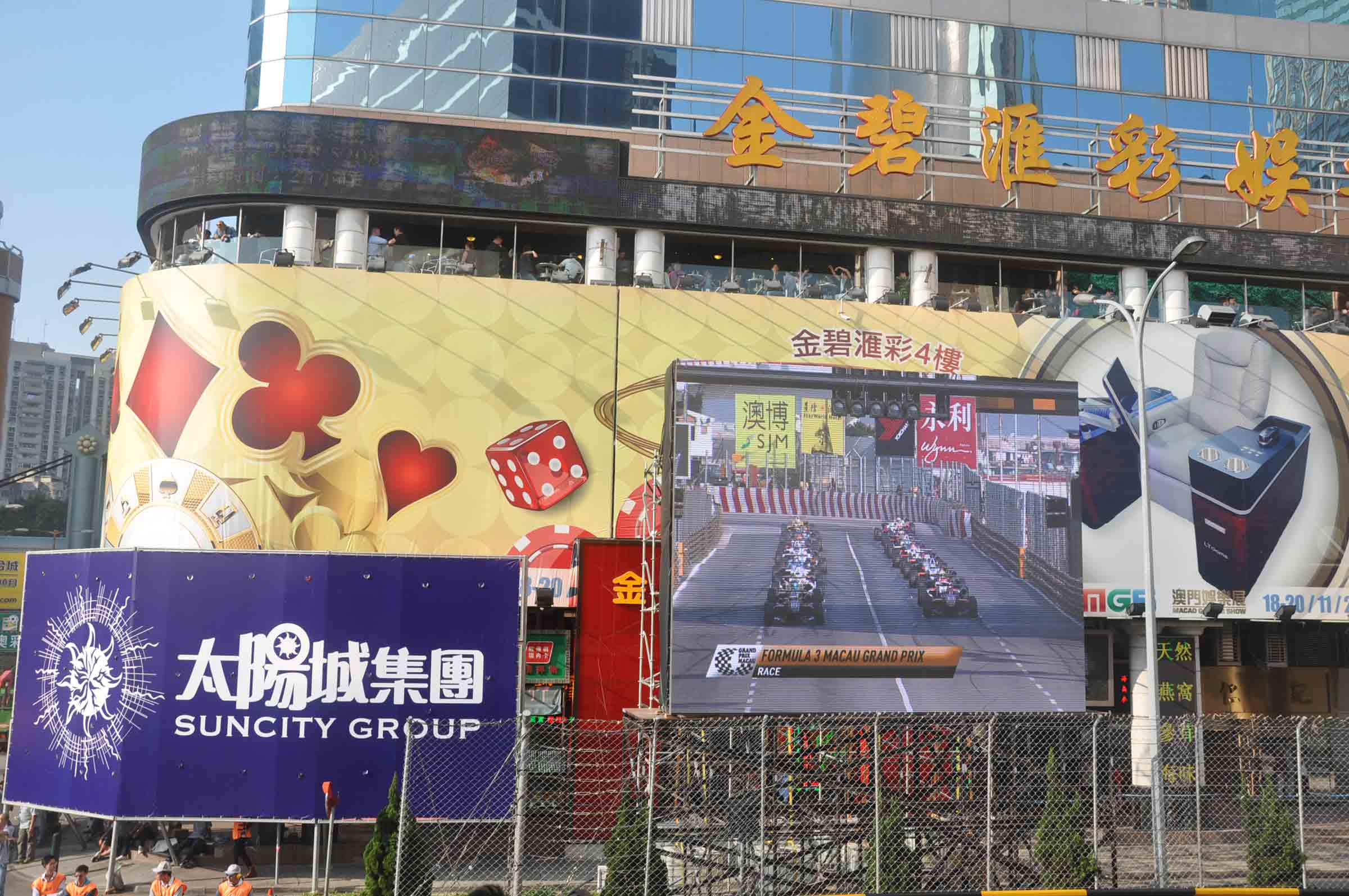 The carnage happened quickly just after the first Lisboa turn at the San Fransisco bend by the Military Club. 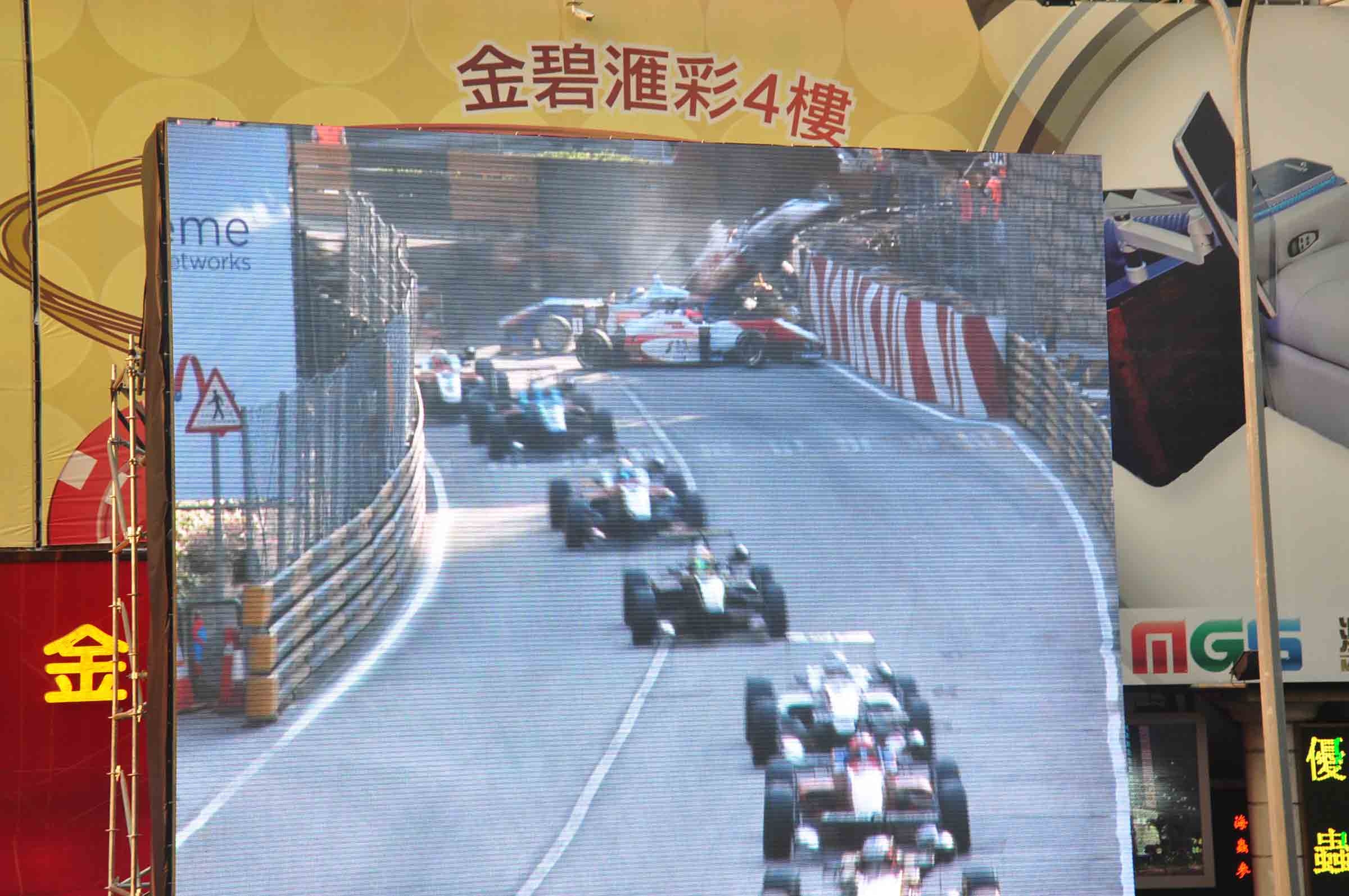 Pole sitter Felix Rosenqvist lost the lead on the first straightaway but two cars ahead of him were soon involved in a massive pile up. 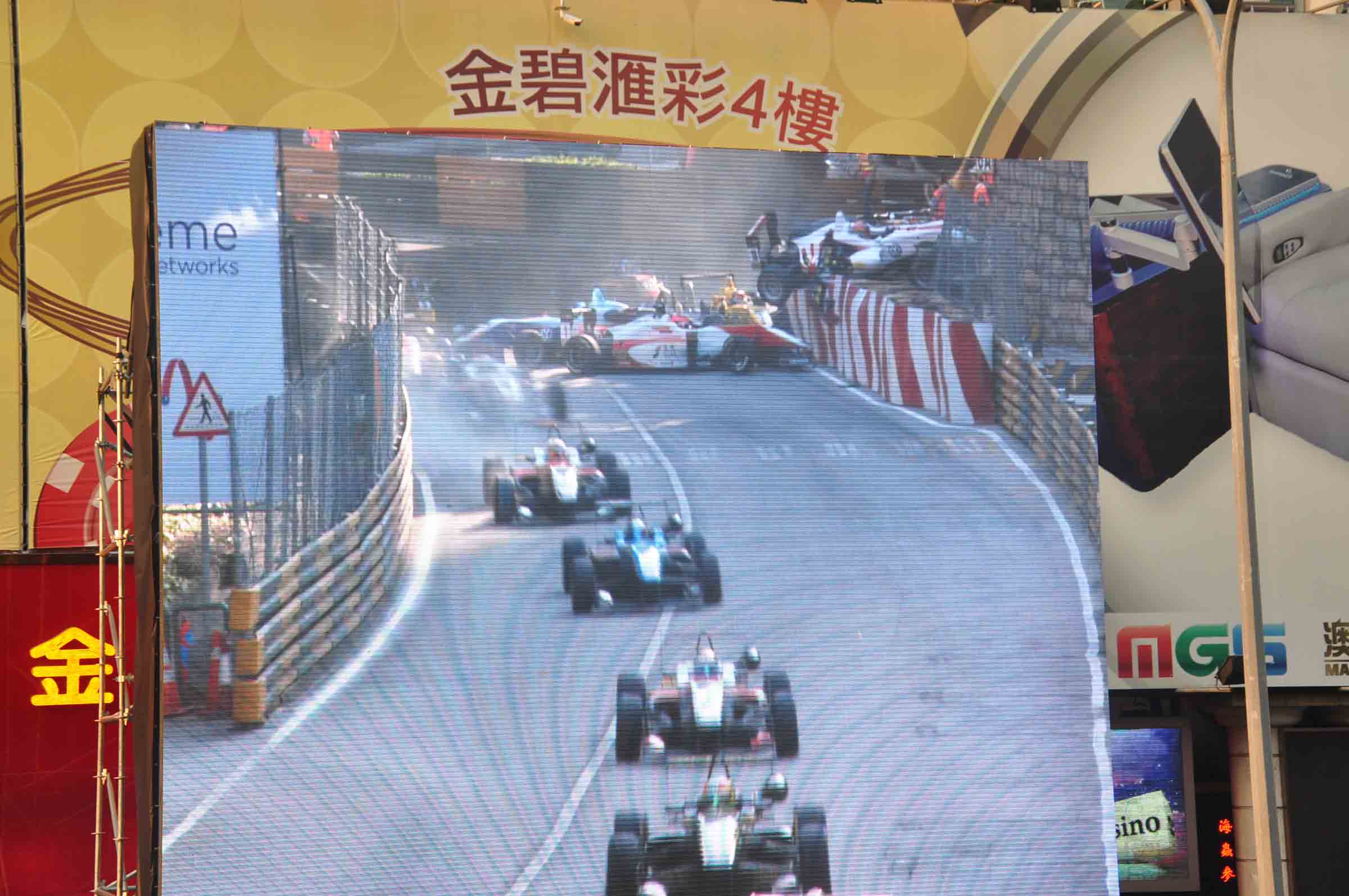 Only 9 cars made it through the melee without being damaged or held up.  The race was then suspended for 40 minutes as the action shifted down to the pits, where crews got busy making makeshift repairs.  Eventually the gun sounded and those cars that could continue re-entered the race and those that could not called it a day.  The original pole order was then re-instated and the race started again after one lap behind the safety car. 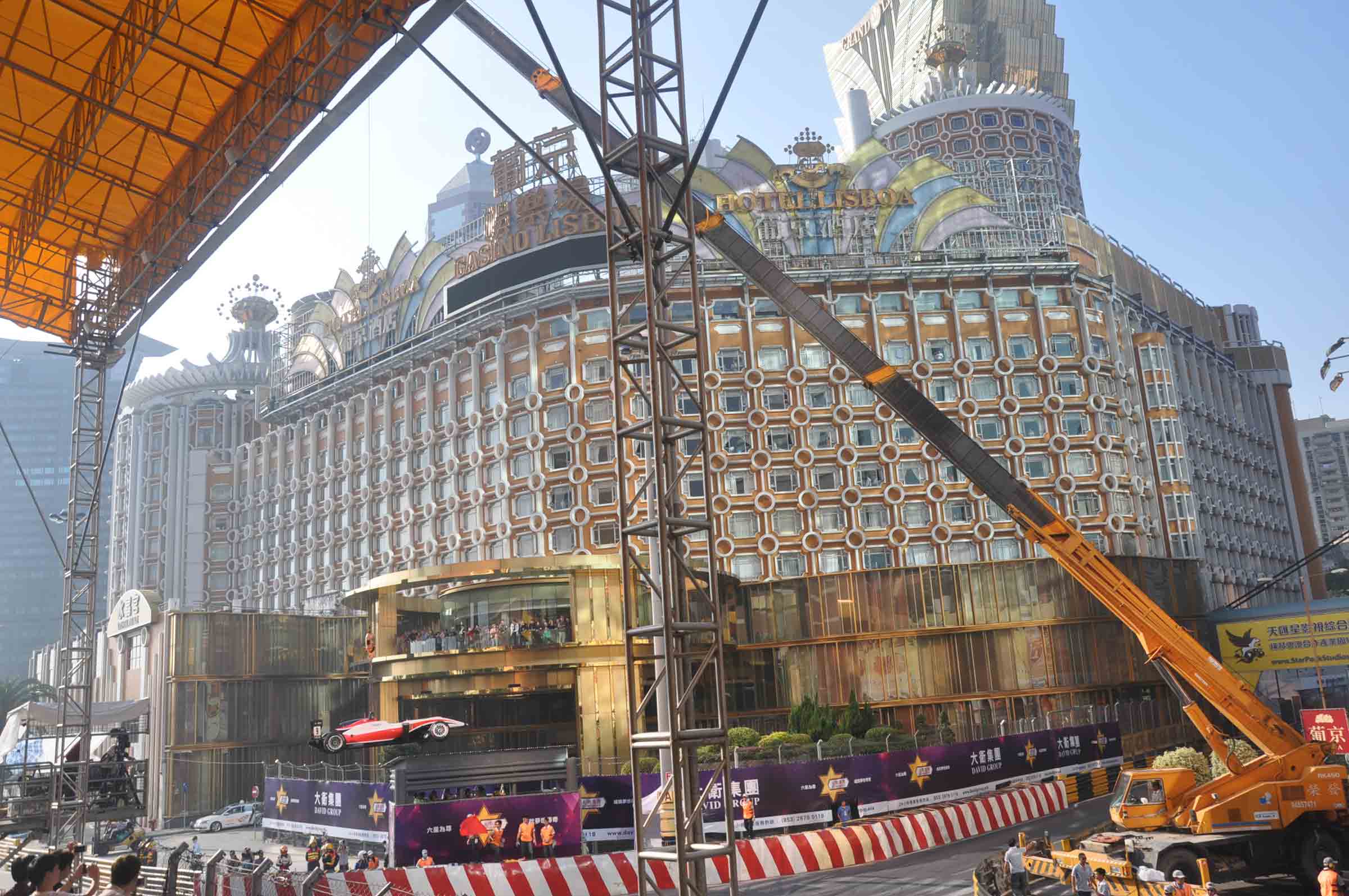 The infamous Lisboa turn claimed its first victim on the first lap, and the offending car had to be air lifted out via crane which looked pretty cool suspended in the air. 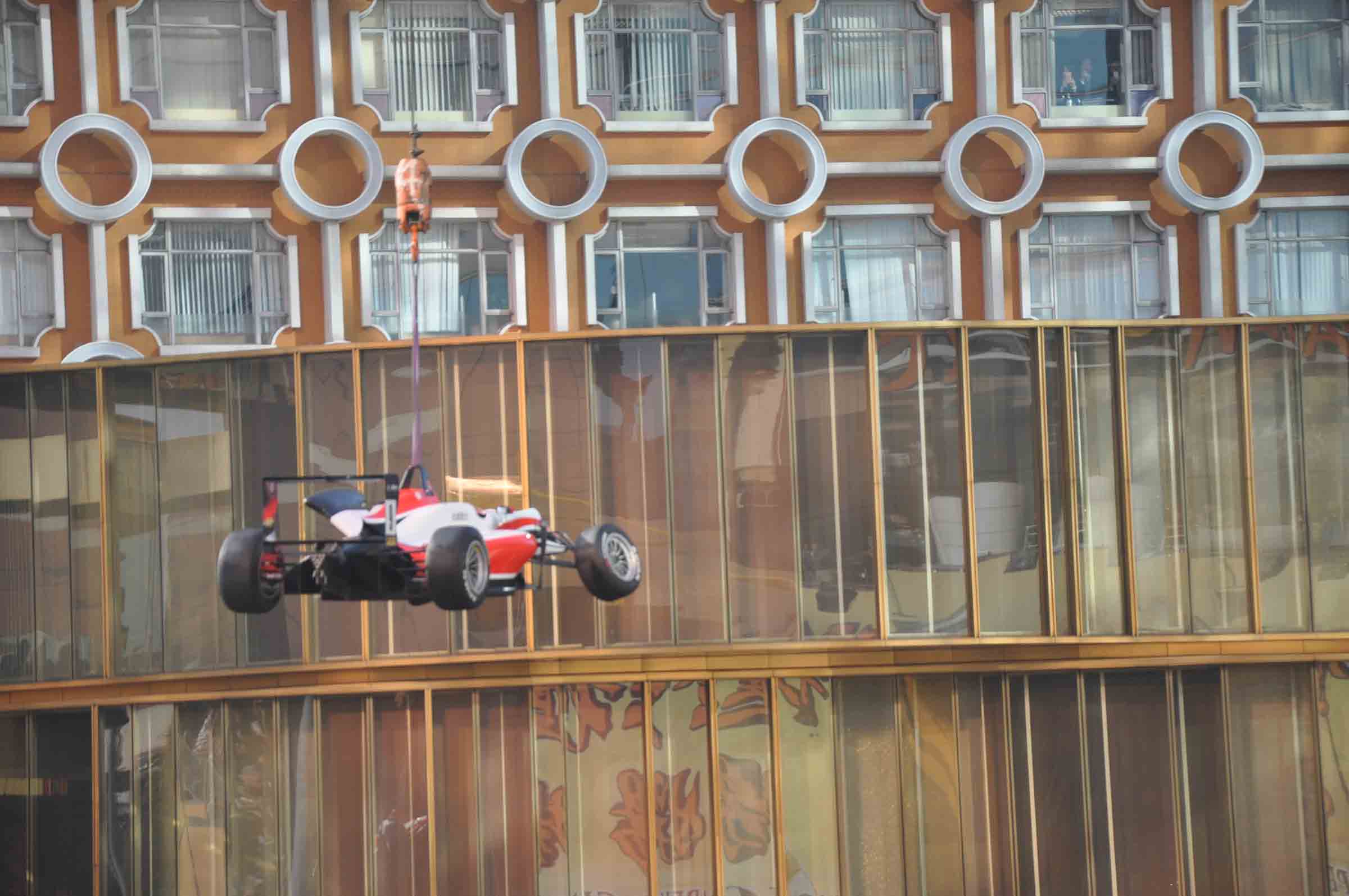 The reminder of the race was rather uneventful as Rosenqvist held the lead from start to finish.  About the only intrigue was who would finish in second, and we were able to see that pass happen right in front of us, when Auger overtook Cassidy on the 12th lap just before the Lisboa turn. 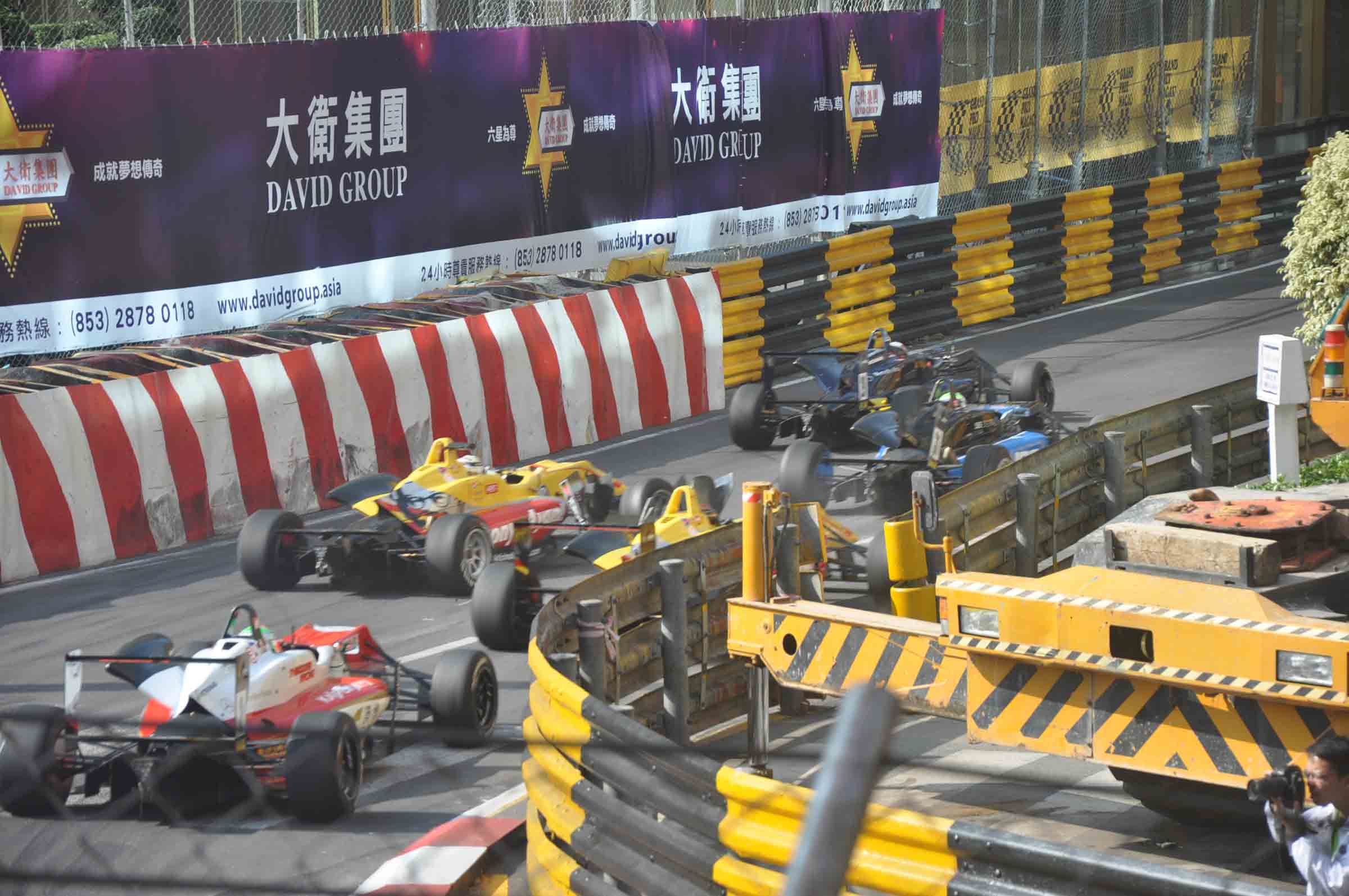 To the victor go the spoils and Felix certainly enjoyed his victory afterwards, and we followed the post race festivities on the big screen. 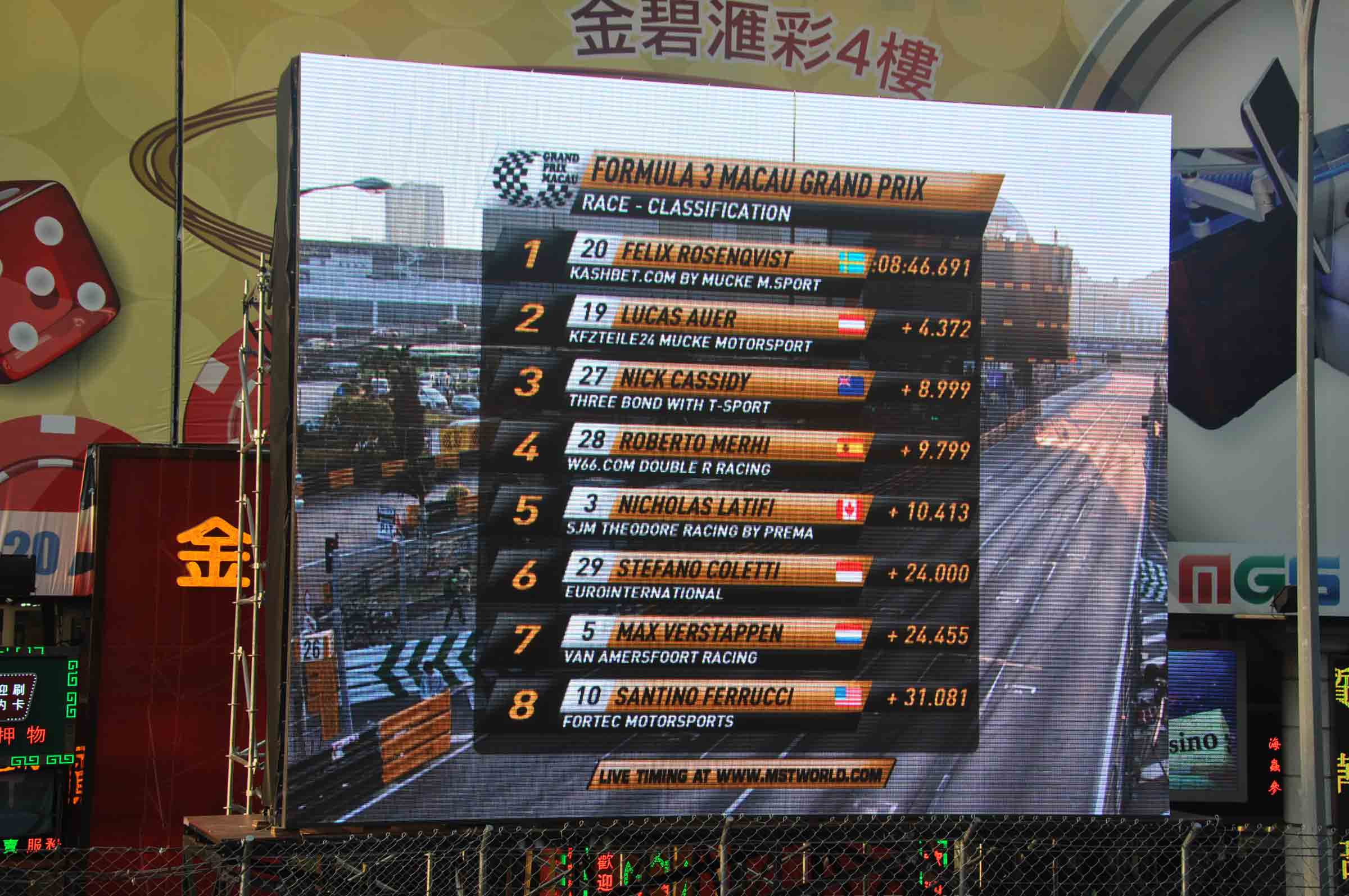 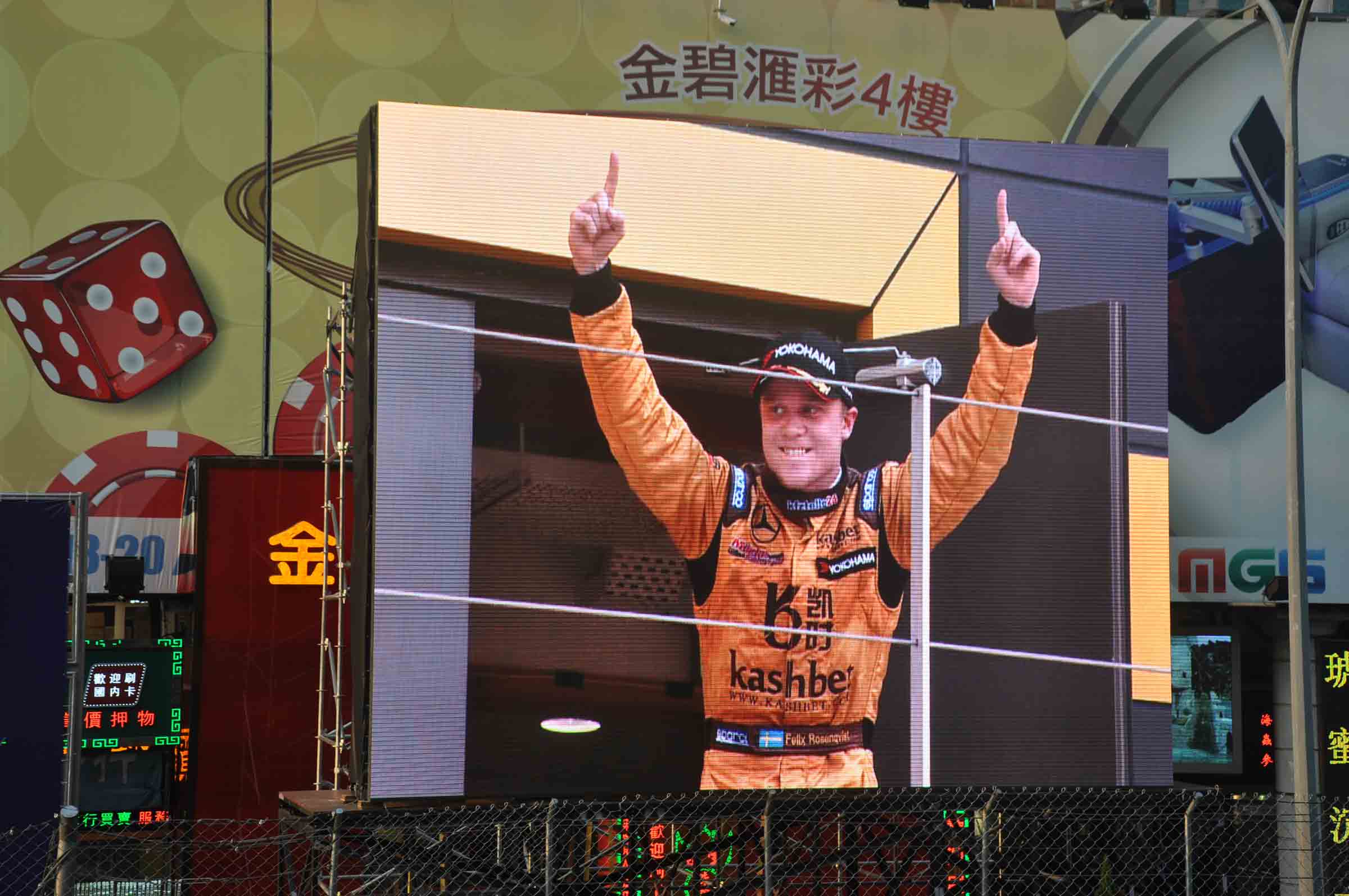 I don’t know how used he is to winning, because his clumsy treatment of the victory wreath looked amateurish at best. 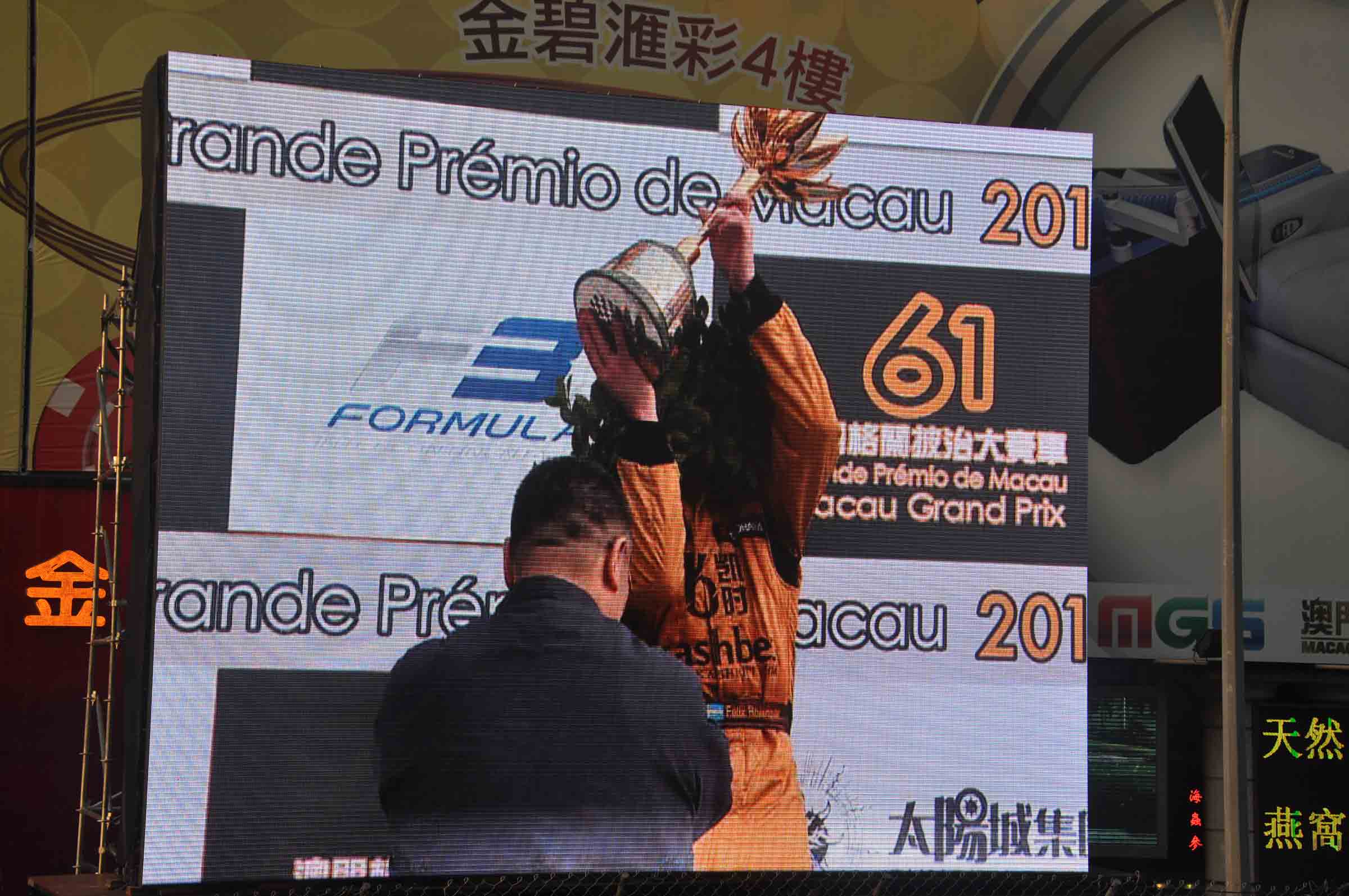 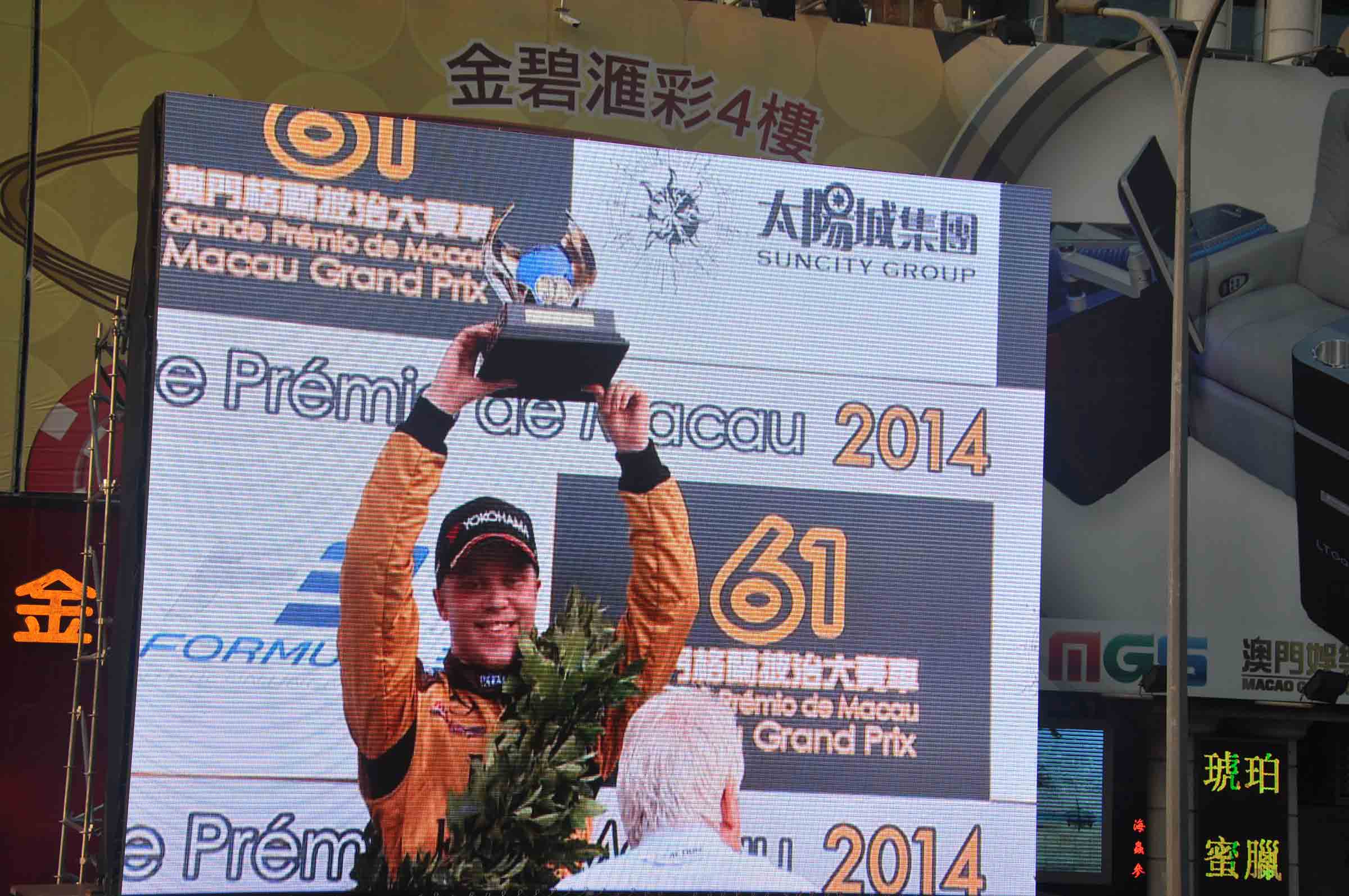 A whole lot of champagne was duly wasted and I only hope that it was bottom of the barrel stuff, otherwise it was an unconscionable act, completely unjustified, no matter what tradition says. 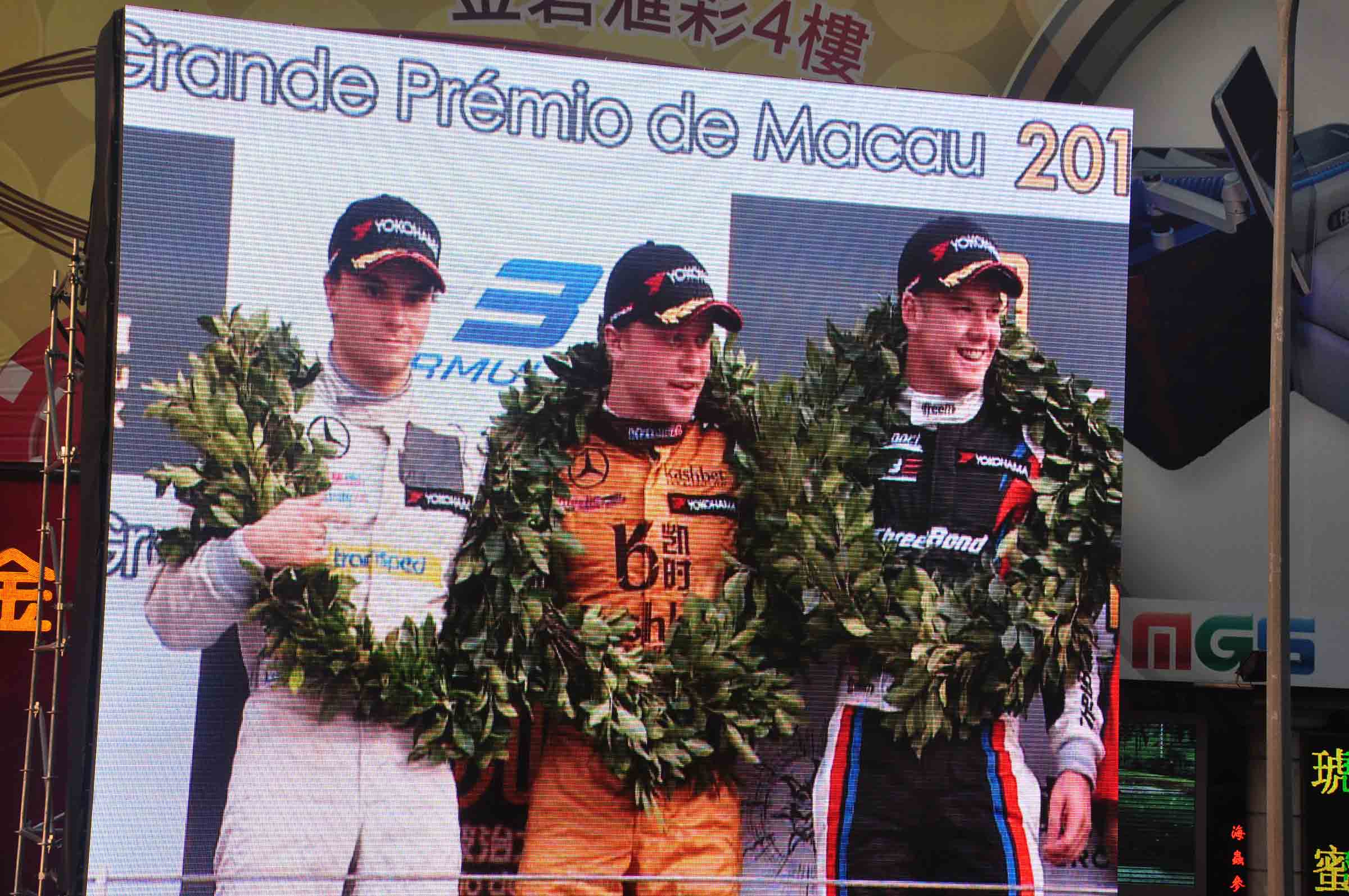 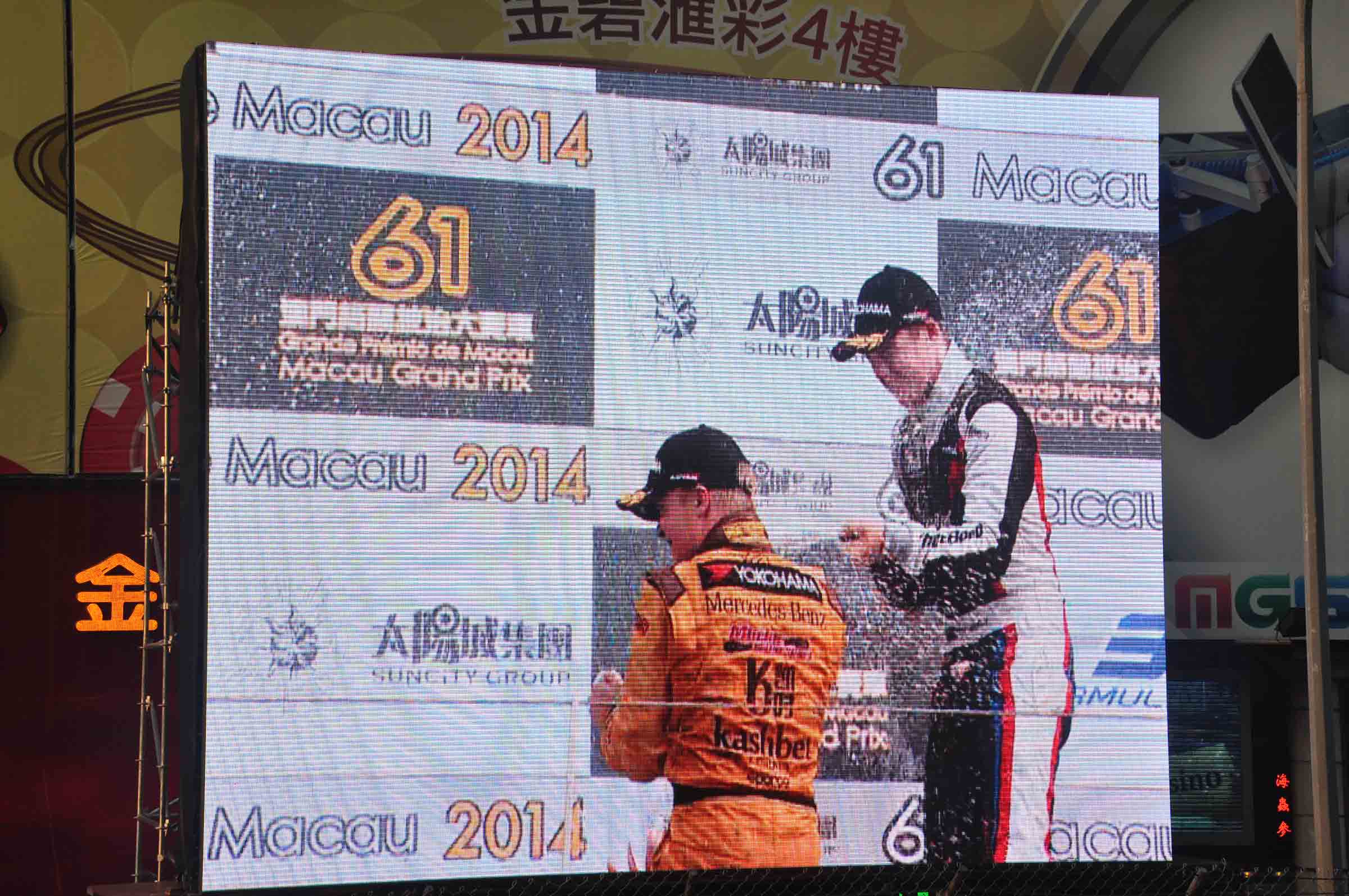 As a spectacle I did enjoy the experience but my first Grand Prix race did nothing to convert me into a fan.  Later on when I saw the highlights on You Tube they looked a lot more interesting than anything I saw live, mostly because of how jacked up the commentators were.  Besides that, sitting in the Lisboa Stand made me feel like I was following 1/20th of the race, which didn’t lend itself to much suspense, and suspense is the main reason why I follow sports to the ridiculous extent that I do .

As far as how Macau was affected during race weekend, I thought that Taipa, Coloane, and anything South of San Ma Lo was no different than usual, while San Ma Lo and anything North of it was a total zoo.  Rua De Campo in particular was an absolute mess and you should have seen San Ma Lo on race day!  People walking at a snail’s pace, in single file, with uniformed cops all around keeping everyone in line, that’s how bad it was.  Unless you’re in town to see the Grand Prix in person, then it’s probably best to steer clear of Macau during race weekend.

To see where Jane and I stayed as well as the different restaurants we tried over the three days, please follow the link below.