Right after lunch, we tried to go to the Ox Warehouse just up the street to laugh at some modern art, but just like our first trip, there was nothing on.  Winding South back down toward Tap Seac Square, we accidentally stumbled onto the Temple of Bamboo, one of Macau’s best kept secrets. 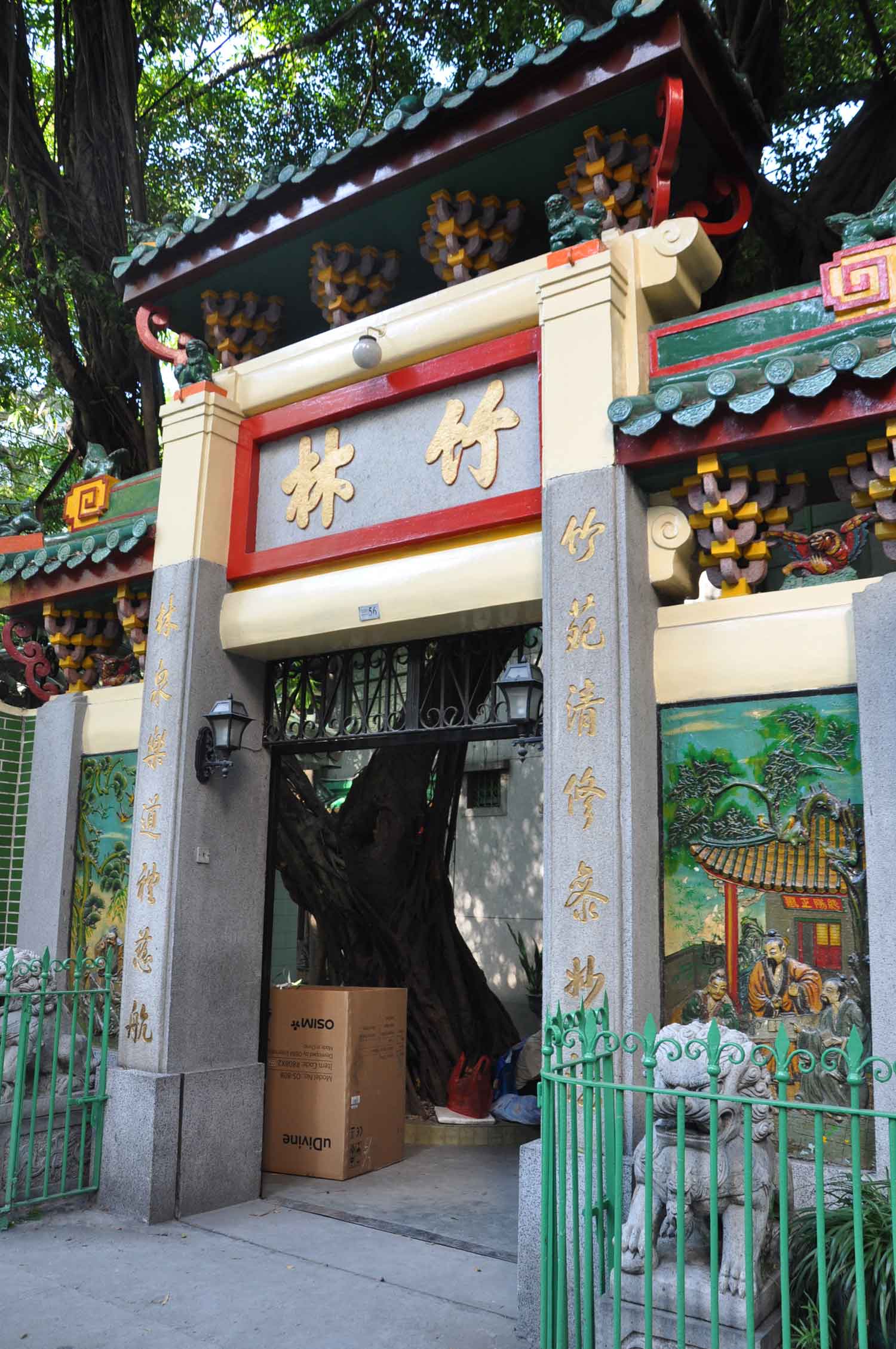 I must admit that temples don’t interest me in the same way that churches do, mostly because our Buddhist and Taoist friends aren’t into large grandiose displays of power and wealth.  They prefer to keep things on the down low, adhering to the tenets of their faith by building simple unpretentious structures.  For that reason, I sometimes find temples to be a little boring: if you’ve seen one, you’ve seen them all. 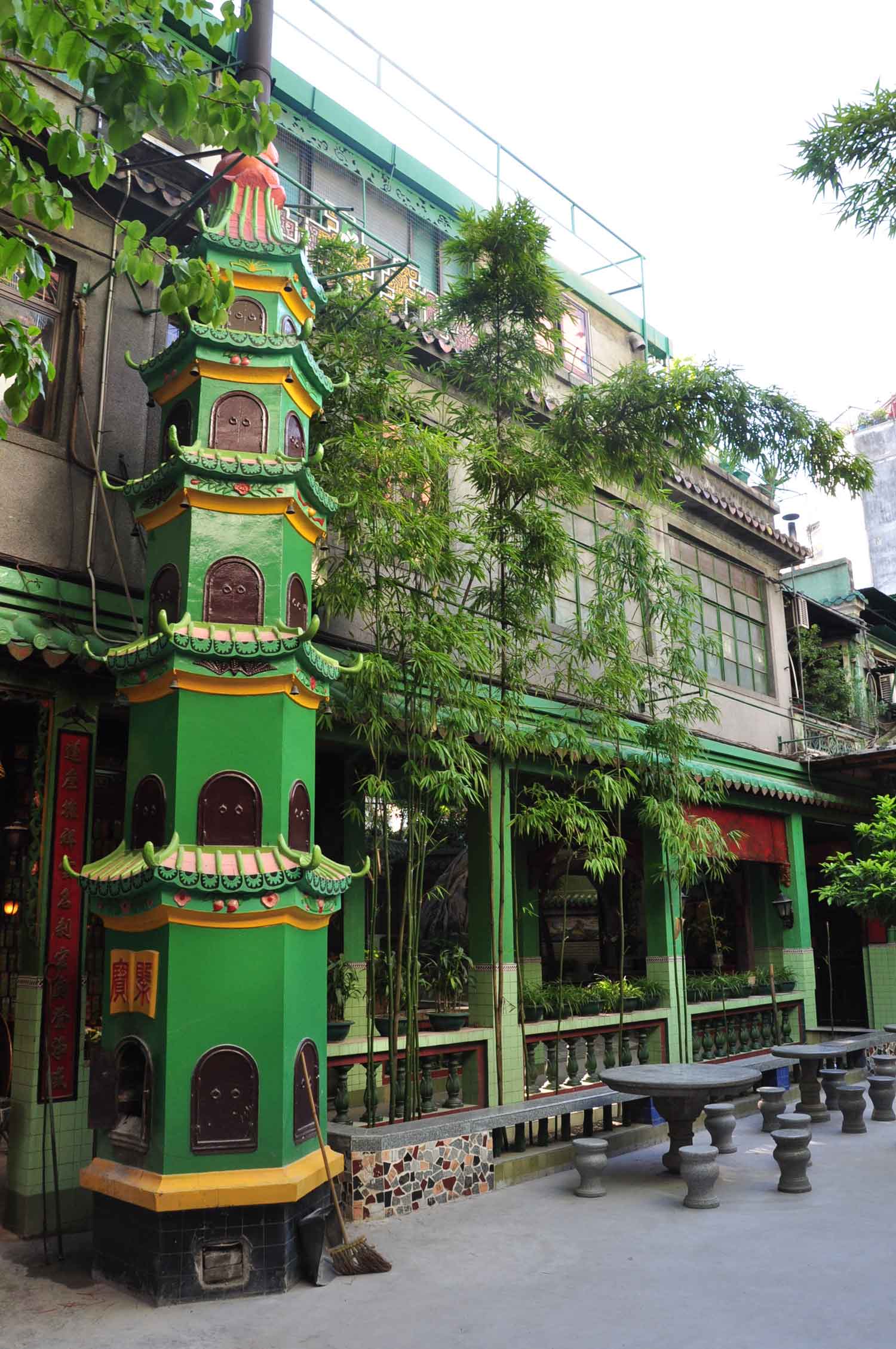 The Bamboo Temple, however, is a clear exception to this rule.  For sheer aesthetic value, this temple can give most churches a run for their money, its beauty just manifests itself in different ways.  I like how the natural elements in the courtyards, namely the trees, flowers and plants, interplay with the Buddhist art, altars and architecture, in ways not seen in churches. 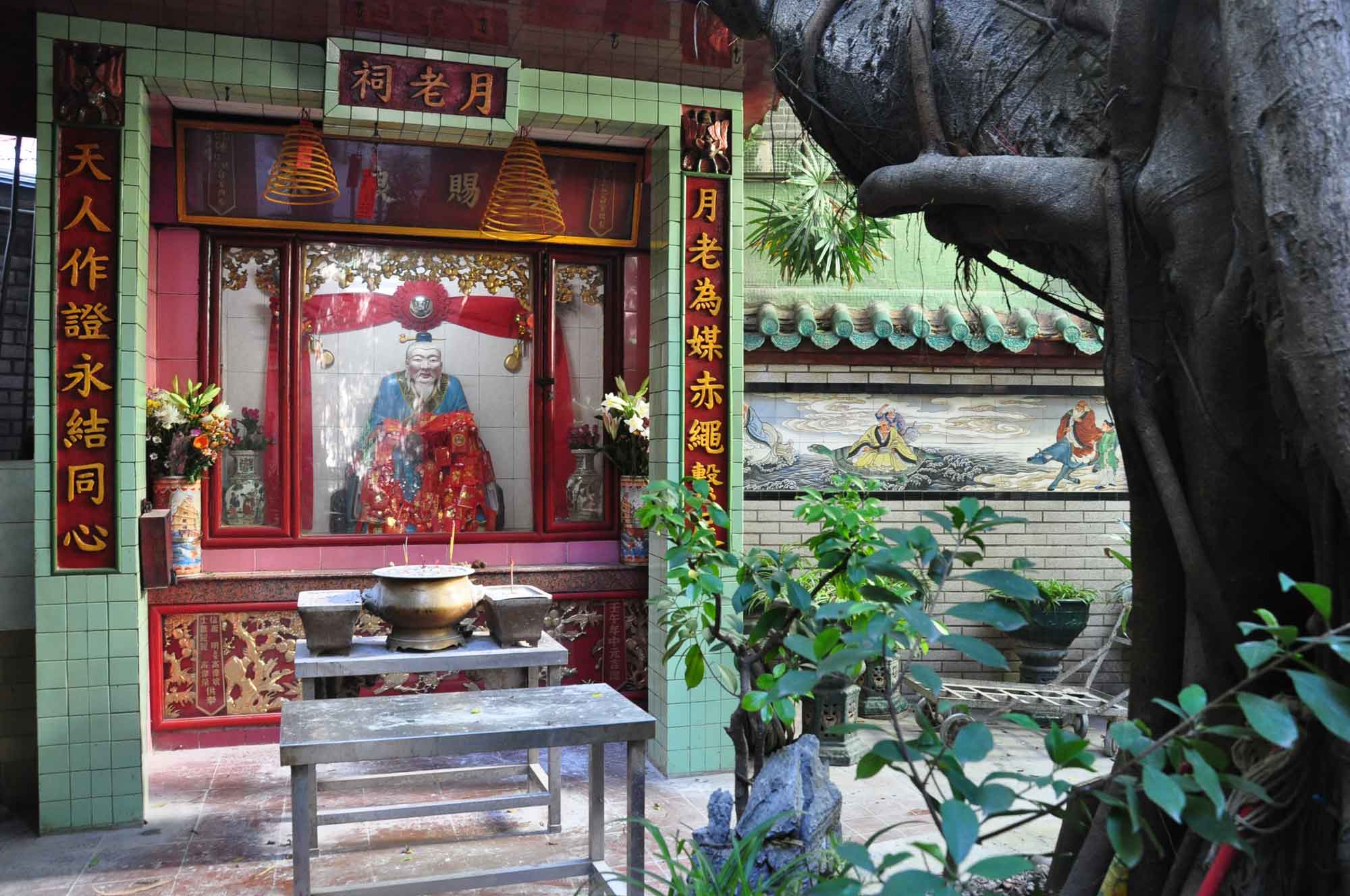 And unlike churches, which are often self contained and rather collective in focus, the Bamboo Temple is an open complex, full of diverse yet harmonious elements, all in step and working together. 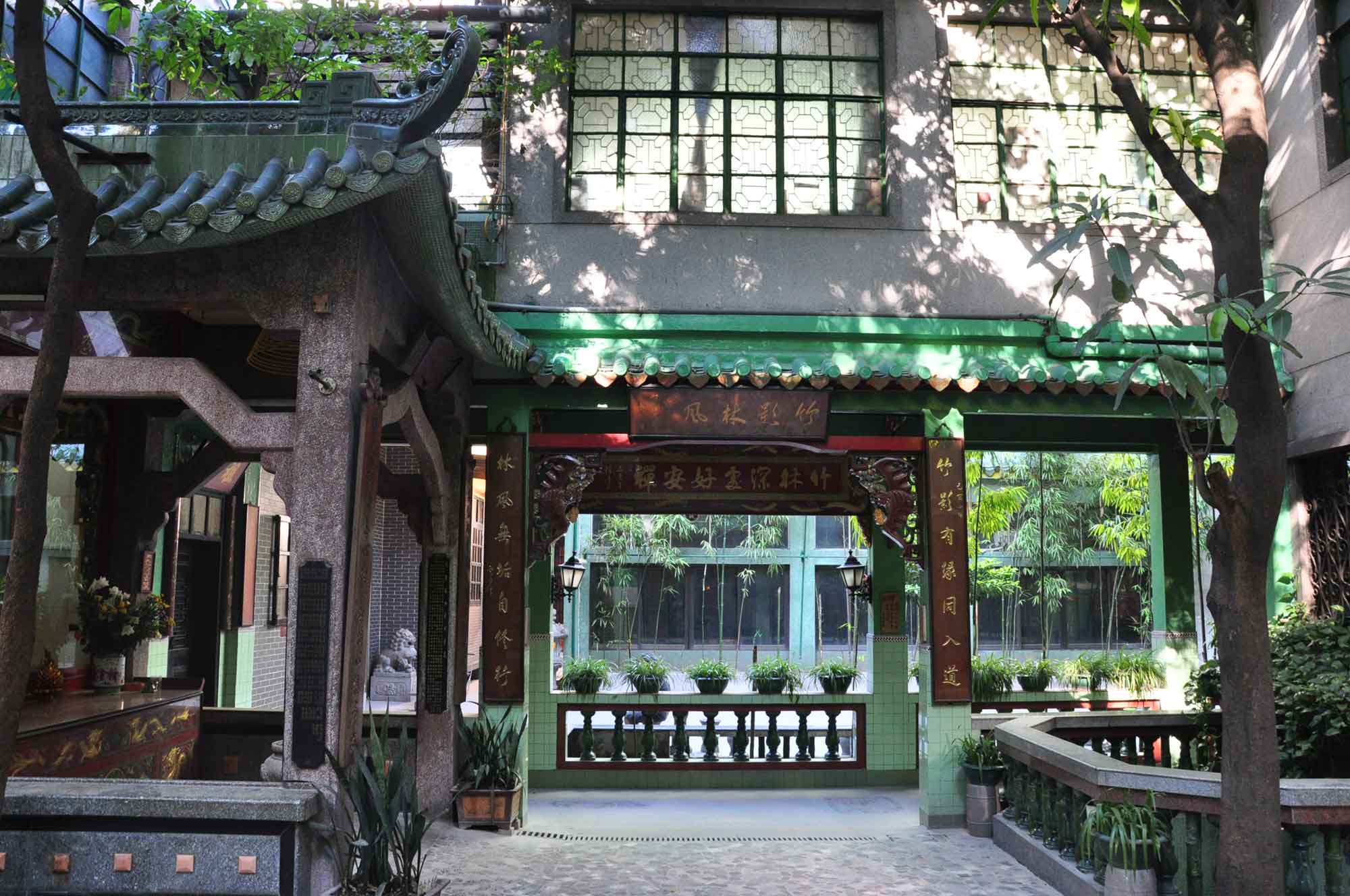 It also might be the most colourful temple in Macau, one rarely visited by tourists, but well worth seeing if you’re in the neighbourhood.  Quite what relation bamboo has to Buddhism I don’t know, but they sure built a beautiful temple in its name. 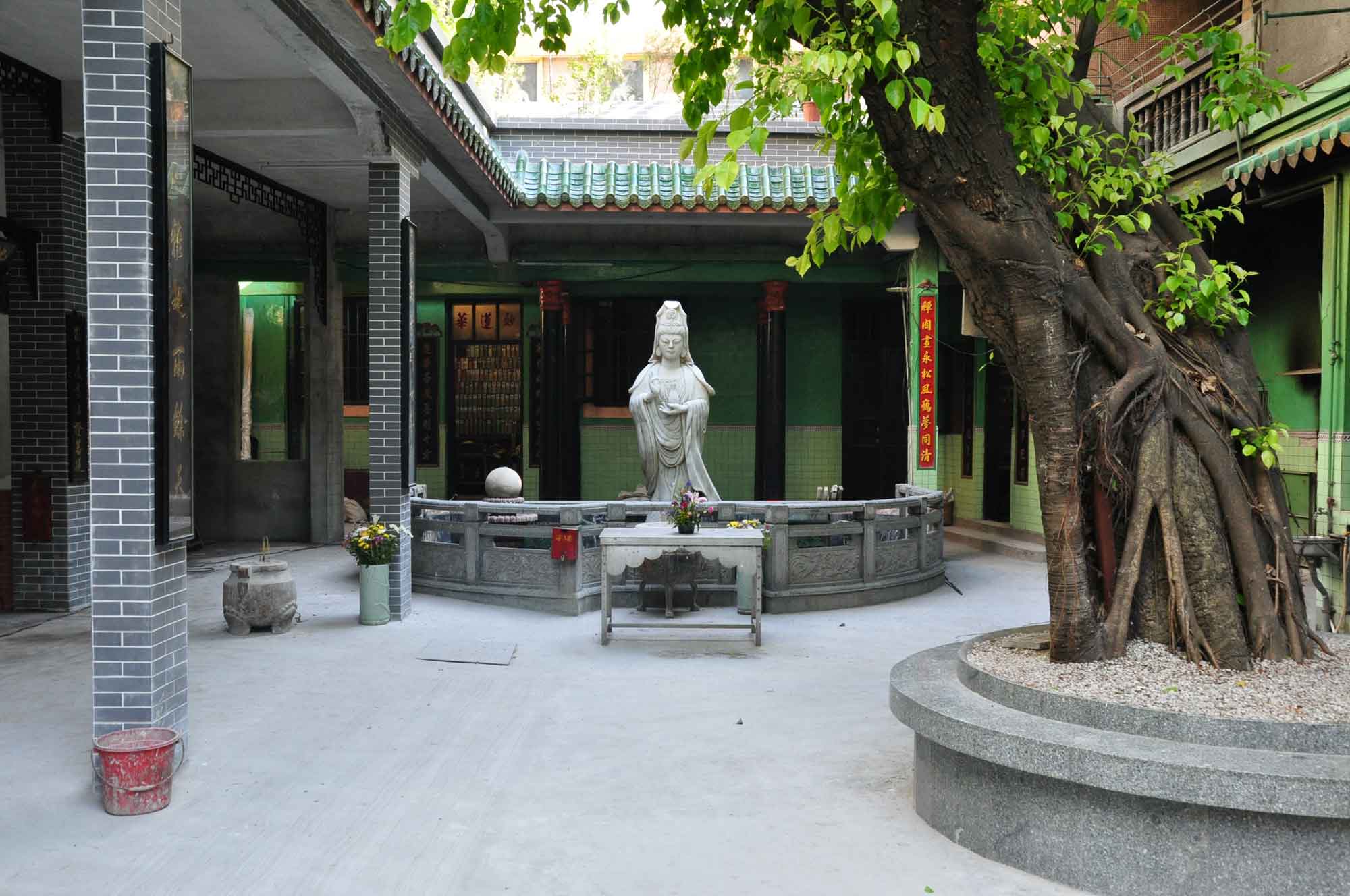 The Bamboo Temple is not only not marked on the free Macau tourist map, it’s not even marked on the brochure specifically listing all the temples in Macau.  It’s not hard to find though.  Once you get to the 3 Lamps District, signs in the neighbourhood will show you the way.  (You should find it on Estrada de Coelho do Amaral, very close to Rua de Bras da Rosa.)

Tap Seac Square was our next stop of the afternoon, to see what was on at Tap Seac Gallery.  Disappointingly, nothing was, but I’ll cheat a little and show you what was on display the following week, From East to West: the Wonderful World of Puppets.  I don’t know how long we’ll continue to make puppets, because it already seems like a lost art form, particularly in the West.  Maybe they’ll still play a part in some traditional festivals, but that’s it.  Anyway, here are the ones I liked best.

Directly opposite of Tap Seac Square is the old Estoril Hotel which has sat empty and disused for many years.  Prior to the Lisboa opening in 1970, it used to be SJM’s flagship hotel, particularly renown for its Thai massage parlor and very physically endowed Thai ladies who worked there.  Their presence in the neighbourhood led to a number of Thai restaurants and shops opening in the area, some of which still remain open today. 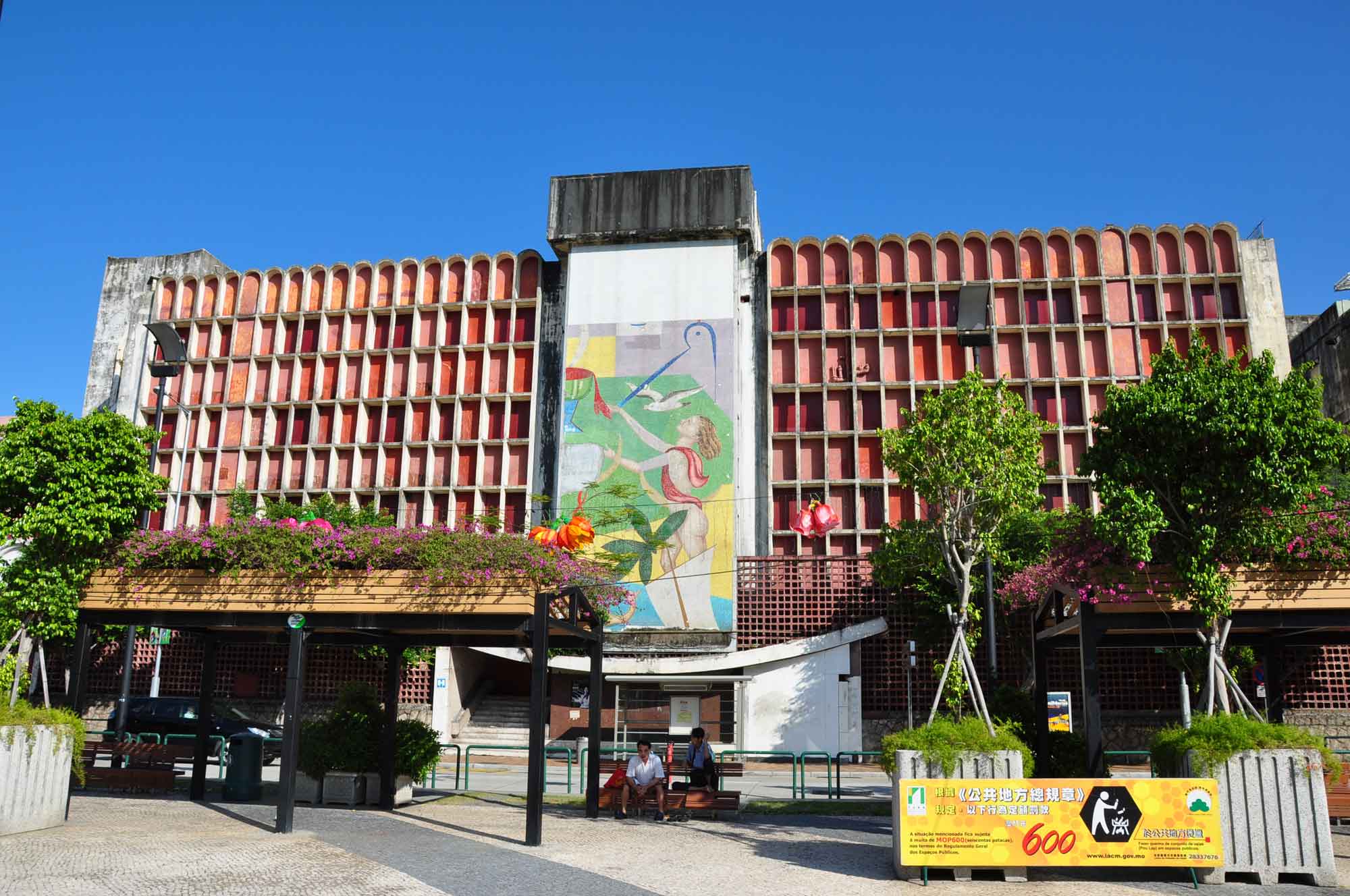 Hotel Estoril may soon be getting a new lease on life, as there are plans to convert it into a community centre for local youth.  Here’s hoping that the building’s current form and architecture are retained, as the Estoril is a historically significant hotel, and it would be a travesty to see it go.

After Tap Seac Square, Mu Yi and I called it a day.  We returned to the Lisboa via Rua de Campo and rested up for our evening endeavours, which included dinner at the hotel’s signature Portuguese restaurant, Guincho A Galera, and a nightcap of wine and gossip at Macau’s premier drinking lounge, MacauSoul.

Guincho A Galera took over the space vacated by Robuchon A Galera when they moved to the Grand Lisboa penthouse and became Robuchon Au Dome.  By far the priciest restaurant in the Lisboa, it’s also the most expensive Portuguese joint in town. 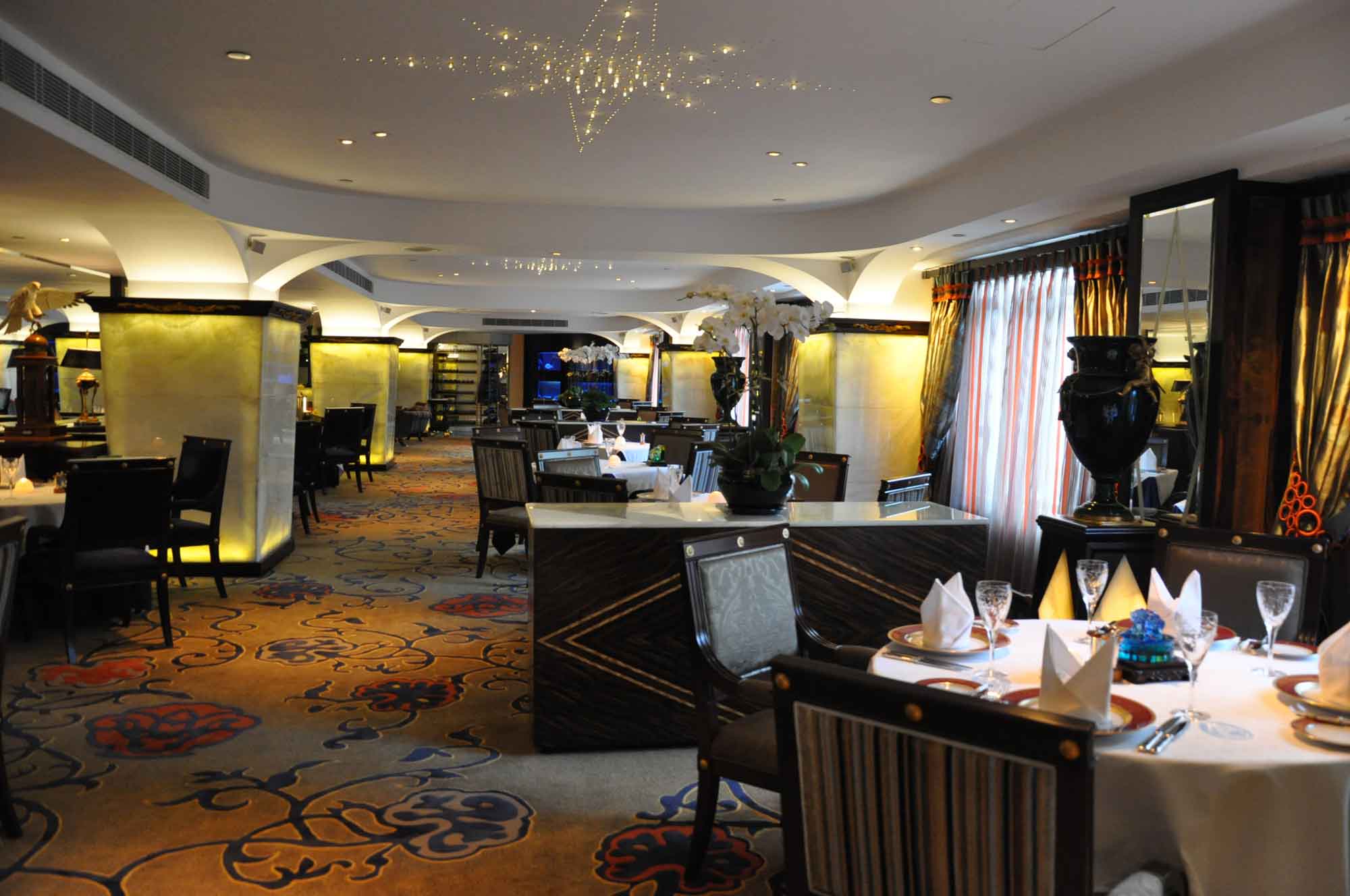 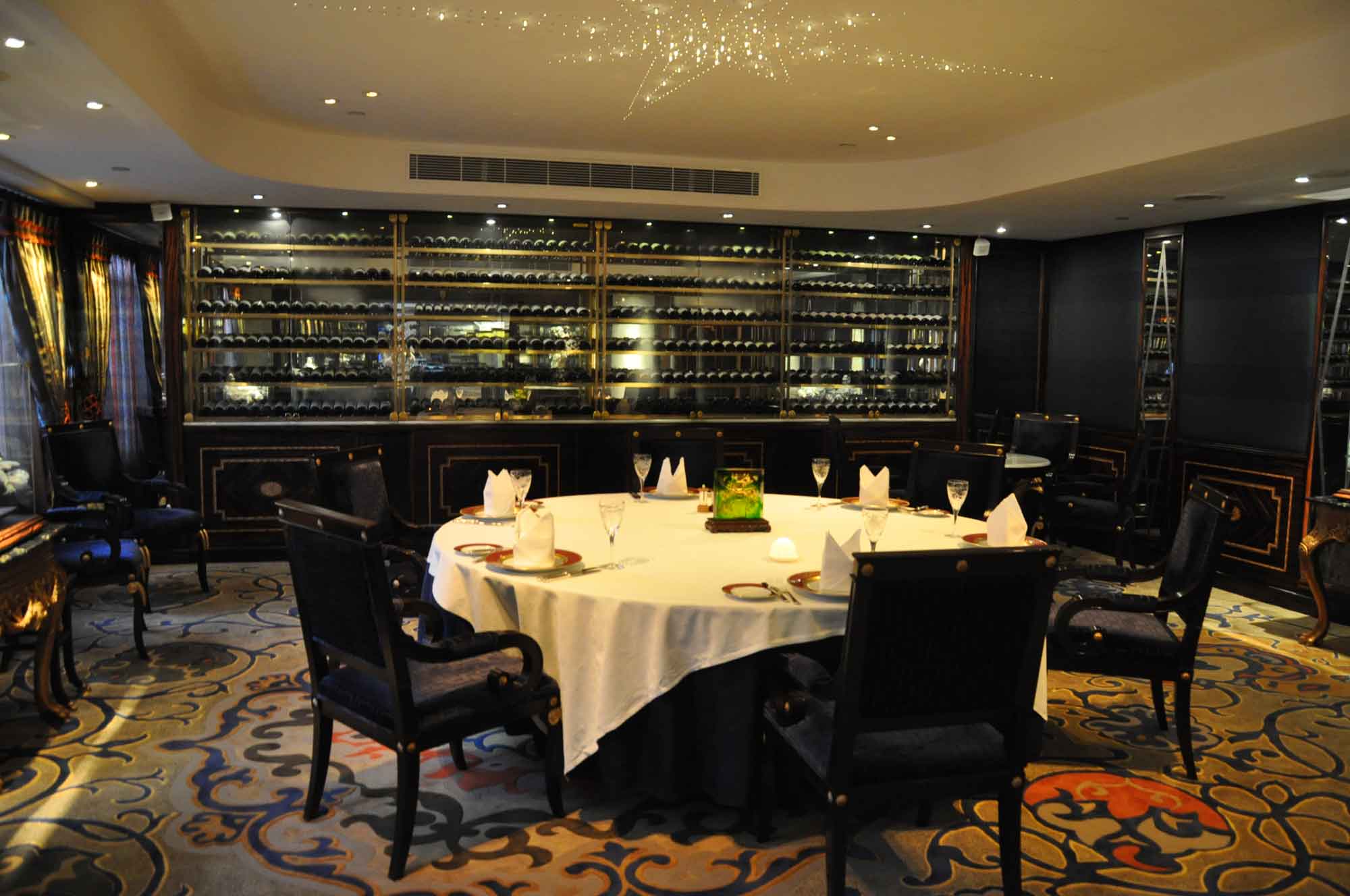 Guincho’s angle is that they’ve taken Portuguese dining and elevated it to a whole new level.  They’re saying Portuguese food can be done like French food, meaning meticulously prepared and ultra refined, thus they’re justified in charging an arm and a leg for it.  Before making our reservations, I thought it sounded like a rip off, but I felt obligated to give them a try anyway.  As it turns out, we should have made dinner plans elsewhere. 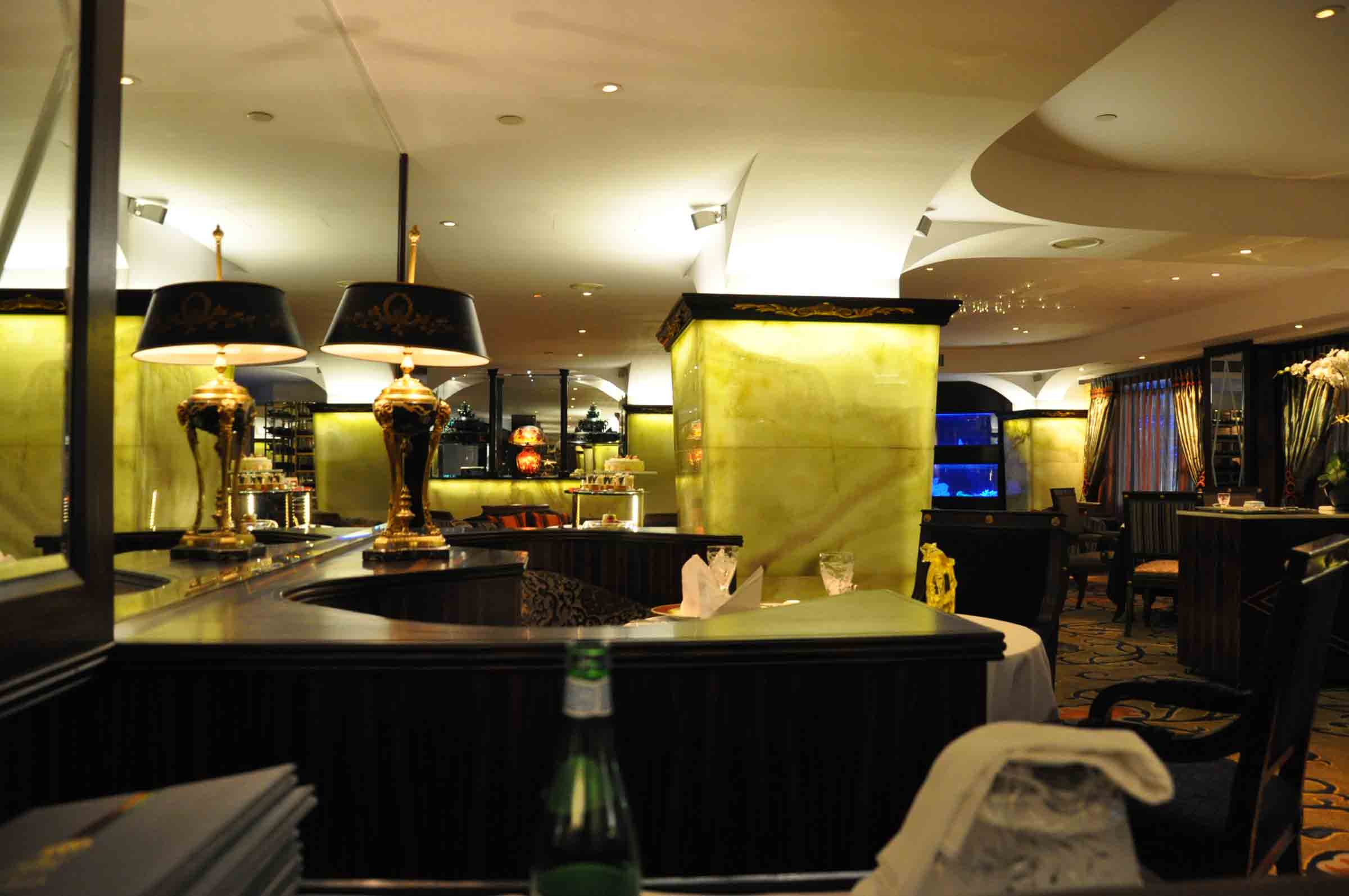 First off, the service was absolutely appalling, and I can say our evening was ruined because of it.  When Mu Yi and I first arrived at 6 pm, we were the only ones there.  Seizing the opportunity to get good shots of the restaurant when we wouldn’t be disturbing anyone, Mu Yi started walking around and taking some pics.  No less than one minute later, she was stopped by the manager who told her no photo taking was allowed in the restaurant. 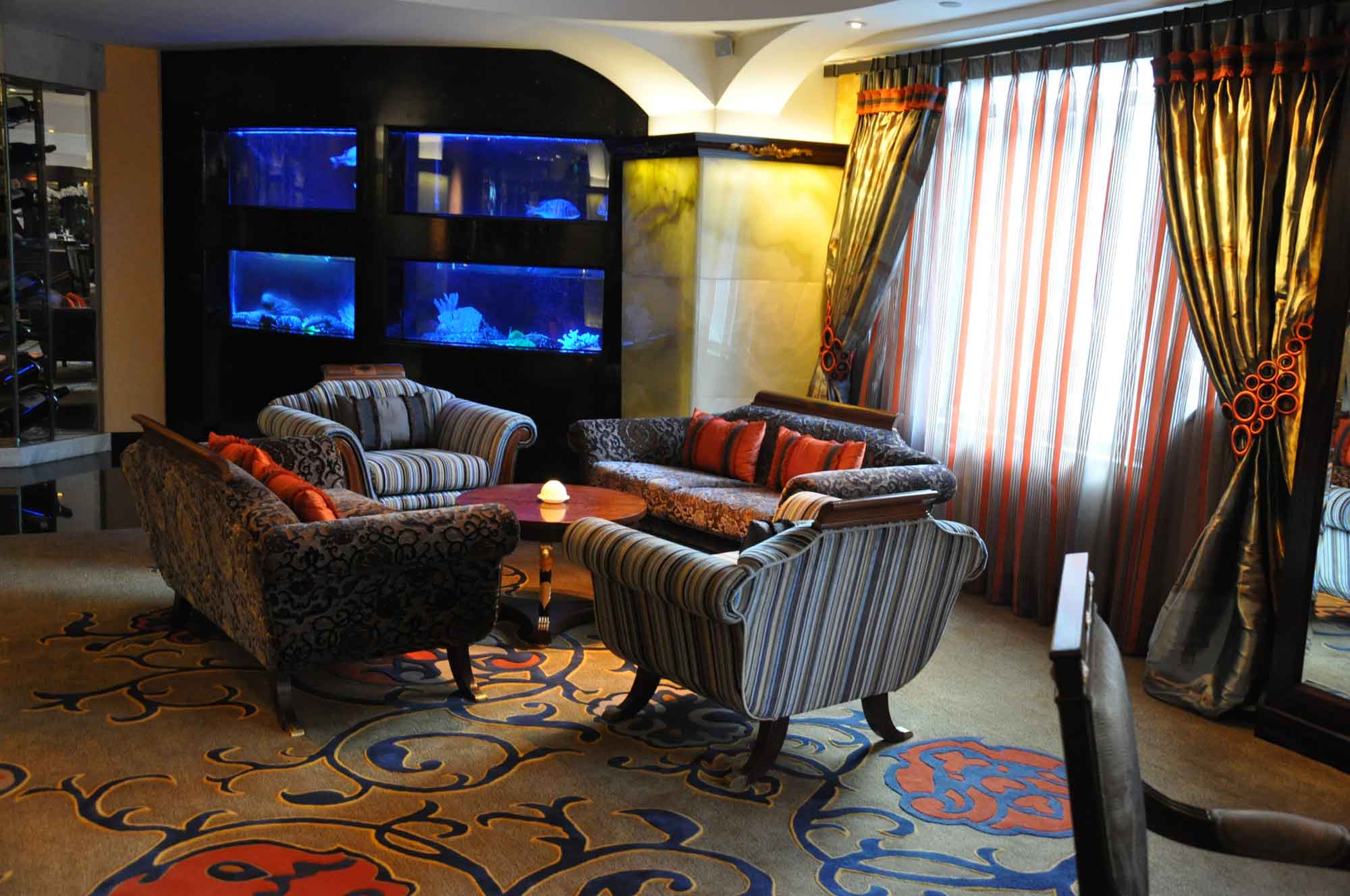 I can understand if there are people eating then it’s rude and intrusive to take pictures of the tables and surroundings, but when the place is empty – and I mean completely empty – then it shouldn’t be a problem.  For two people to eat at Guincho A Galera, the bill will easily exceed $3000 quite quickly.  And if I’m going to spend over $3000 for a meal, then I expect some customer service and some understanding that any reasonable request I have will be met.

And it will be met with smiles and politeness, like how it used to be done at the Tasting Room. That wasn’t the case with the mean manager though, and after his out and out rudeness, I refused to eat.

And so that’s how our dinner there went, which is to say, not very well.  Mu Yi was left to eat alone, while I was on hunger strike. She went for a vegetable salad, fish soup, seafood rice and fig tarts for dessert.  The highlights were the fish soup and the seafood rice, both were done well and extremely tasty, so at least her dinner wasn’t a total wash.

They were also expensive ($150 for the soup, and $550 for the seafood rice), and I’m pretty confident I could take her to five other restaurants in the city where both dishes would be just as good, for a third of the cost.

The dessert and salad, on the other hand, were nothing special and she wouldn’t order them again.

All told Mu Yi’s bill for one ran $1233, an obscenely high number for the uneven quality of food and poor service.

In my opinion, Guincho A Galera is a farce and you should keep your hard earned money in your pocket.  The city is chock full of great Portuguese joints that are just as good, if not better.  Antonio and A Petisqueira are fine options if you’re down in Taipa, while Dom Galo and A Baia are both top notch on the old Macau peninsula.  Best of all, none of these restaurants claim to be something they’re not, then gouge you on the way out.

After the sham at Guincho, Mu Yi and I wandered over to the little Lane of Love near the ruins of St Paul’s for a wine bar we’d heard fantastic things about.  Not far from the Lisboa, it was only a 20 minute stroll through the soft lights of Senado Square and horde of evening tourists.

I had no need to eat at Guincho since we were going to MacauSoul afterwards, and they have a ton of great food there.  Put it down in the record books, August 14th, 2012 was the first time I ever set foot in that wonderful establishment, and it’s a place I keep returning to time and time again.  When I used to live in Beijing, I’d plan trips to Macau around times when MacauSoul would be open.  Now that I’m in Zhuhai, I make it a point to go there at least once a week.  And I must say that MacauSoul never gets old and it never disappoints.  Rather, just like the great wine they serve, it only gets better with time.

There’s already a lot written about MacauSoul on this website.  There’s a nice review of it here MacauSoul, full of most of the things you need to know.  It’s included in the Top 10 Things to Do in Macau.  It’s part of the Trip Itinerary and Photobook. Whenever I’ve had an opportunity to mention it somewhere I have.  I’ve pretty much said all I need to say about it, but I’d like to close with one last thing.

Over the past three years I’ve gotten to know the owners a little bit, just by taking advantage of their good will and going there so damn often, most nights staying far too long.  (My apologies!)   Long since retired and in their 70’s, not to mention millionaires many times over, David and Jacky still bust their tails in a bar of which they are the only staff, and do so five days a week.  On any anonymous night at the Soul, David will be pouring patrons a glass of wine while Jacky is downstairs fixing a mean spread of food, whether it be Macau’s best imported cheese, Macau’s best Pata Negra, Macau’s best Parma Ham, or Macau’s best (insert whatever menu selection you want here).

At an age when most of their contemporaries fret over which vacation to take next, or which golf club to buy, they keep the pedal to the metal and the doors to paradise open, much to the delight of everyone who goes there.  The only question I have is why they do it.  Since they’re not in it for the money, and I can definitely say they’re not, because they’ll buy a bottle of wine for $500 and sell it for $600, and the food gets marked up even less, then what’s going on here?  What’s the point?  Why do they do what they do?

The only possible reason must be because they love doing it.  And when you love doing something, you tend to put a lot into it, and a lot of yourself into it as well.  And every inch of MacauSoul is them and theirs.  From the furniture to the art, the decoration to the design, the wine list to the wine glasses, the music to the food (especially the sourdough bread, hummus, and chili sauce they make themselves), it’s all David and Jacky, what they like and enjoy, what they value and appreciate.  And I’d just like to say thank you to them.

Thank you for doing what you do.  Thank you for helping me buy my wine glasses and wine filter.  Thank you for all the great jazz recommendations and jazz music.  (And yes, I was wrong about Monk.)  Thank you for lugging suitcases of Spianata and cheese back from England.  Thank you for teaching me all about Portuguese wine, port and madeira.  Thank you for having such a great bar that people like me and Mu Yi can go to and enjoy.  When the inevitable happens and that day comes when the big doors out front close for good, I’ll be very sad to see you go.