The following day we bid farewell to the Royal Hotel, checking out at a bit late, at 1 pm.  (Thanks Royal!)  We then set off for Apo Mac, a retirement club on Avenue Sidonio Pais close to the Rickshaw. 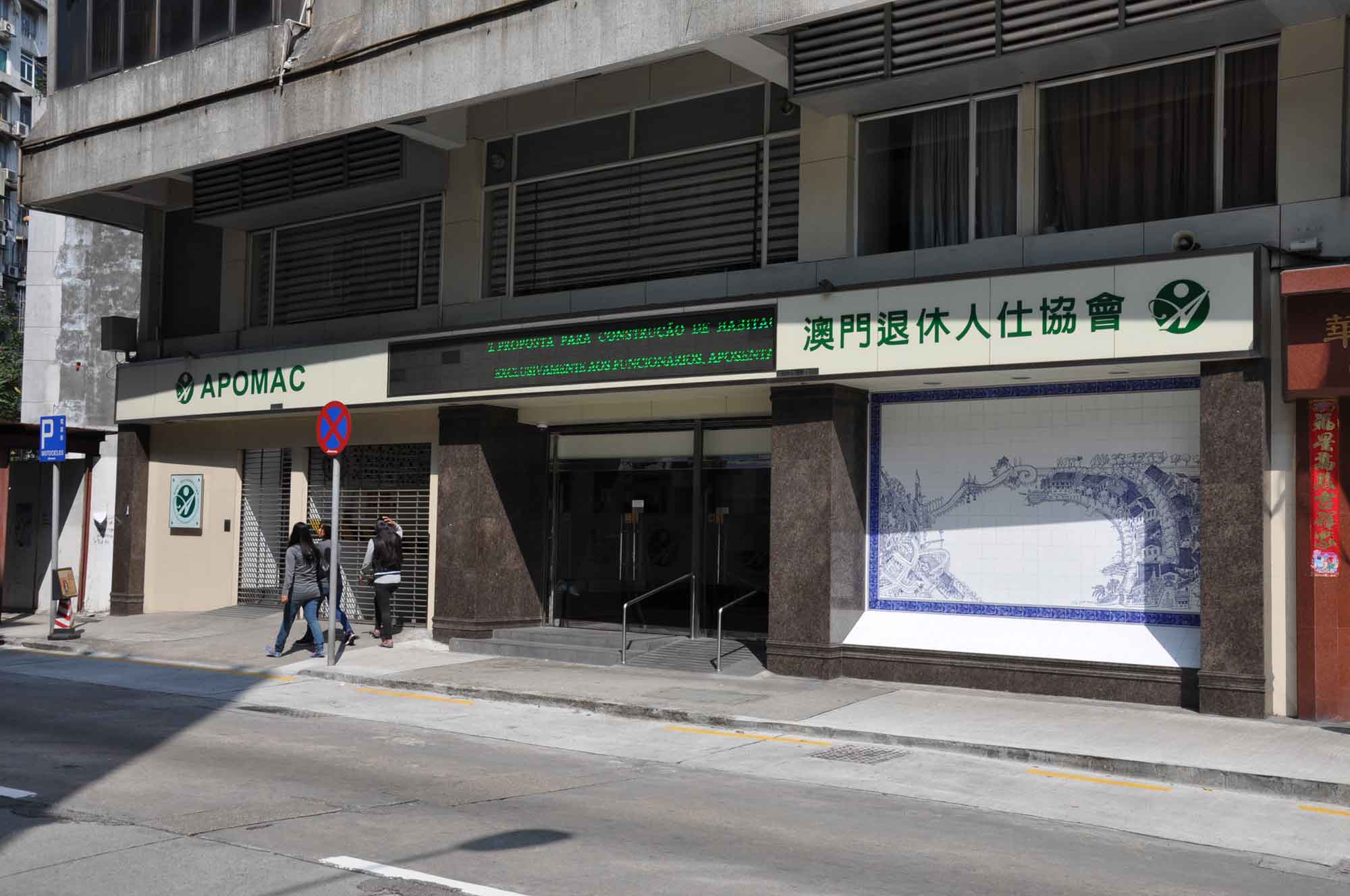 Pretty much frequented by locals and that’s it, Apo Mac is the kind of restaurant you’d never know exists unless you have friends in the city that you’re visiting. 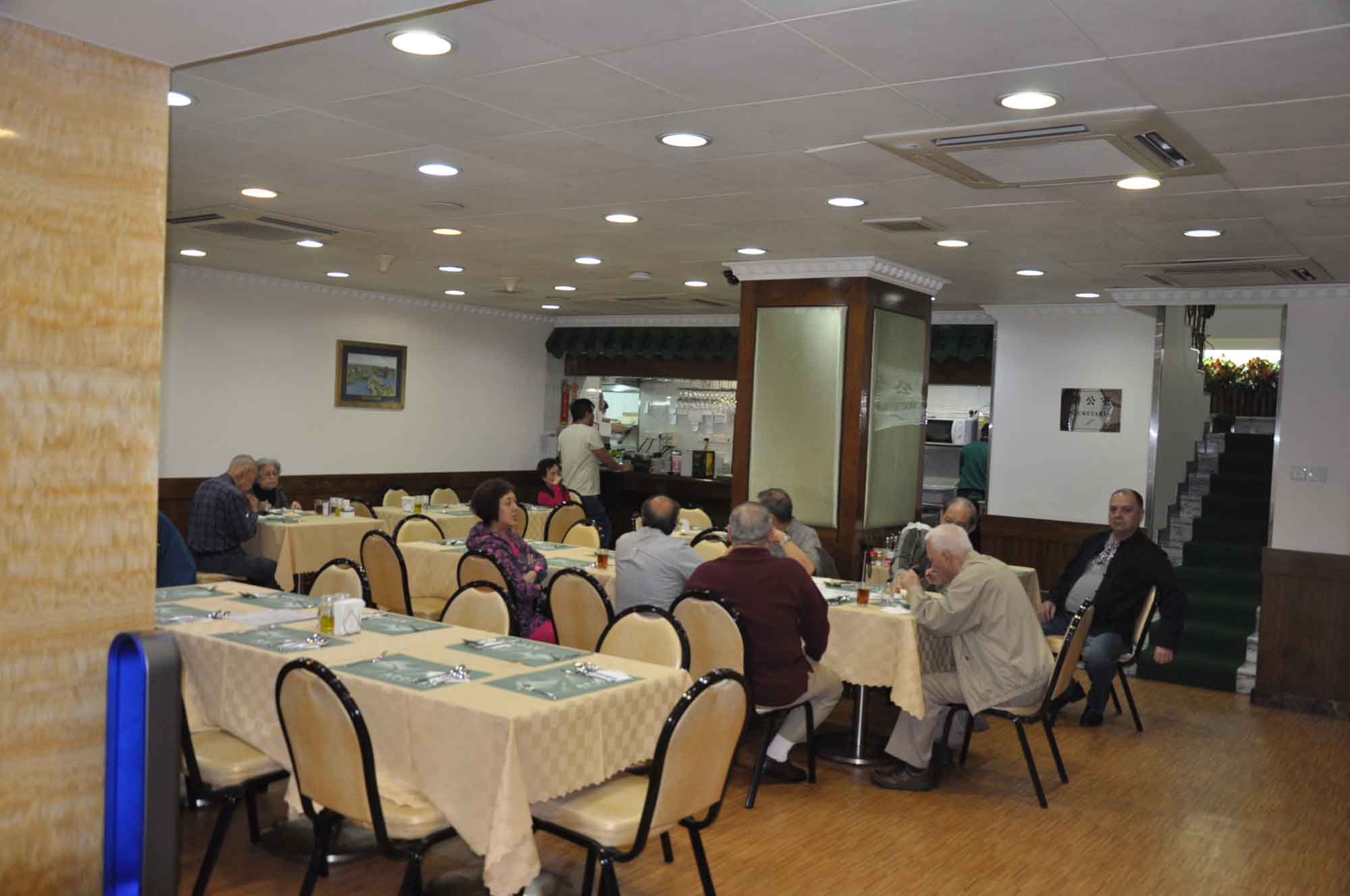 Luckily for me, I have the owners of MacauSoul and you have me, so we should be all good. 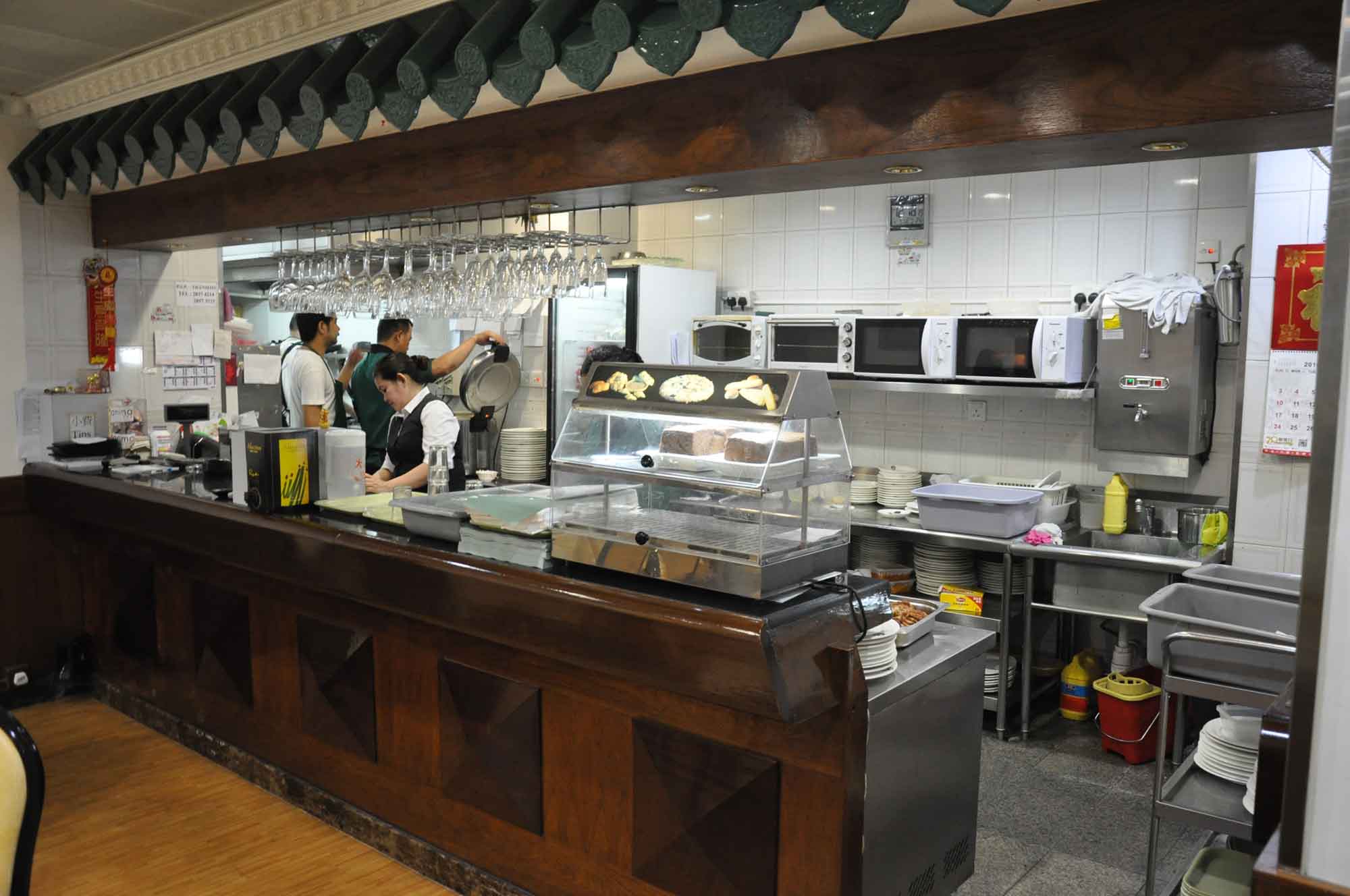 Most of the other patrons were older customers and one looked like she was in her pajamas, but for all I know that could be the ripping fashion among grandmothers in Macau, so I’ll let it slide. 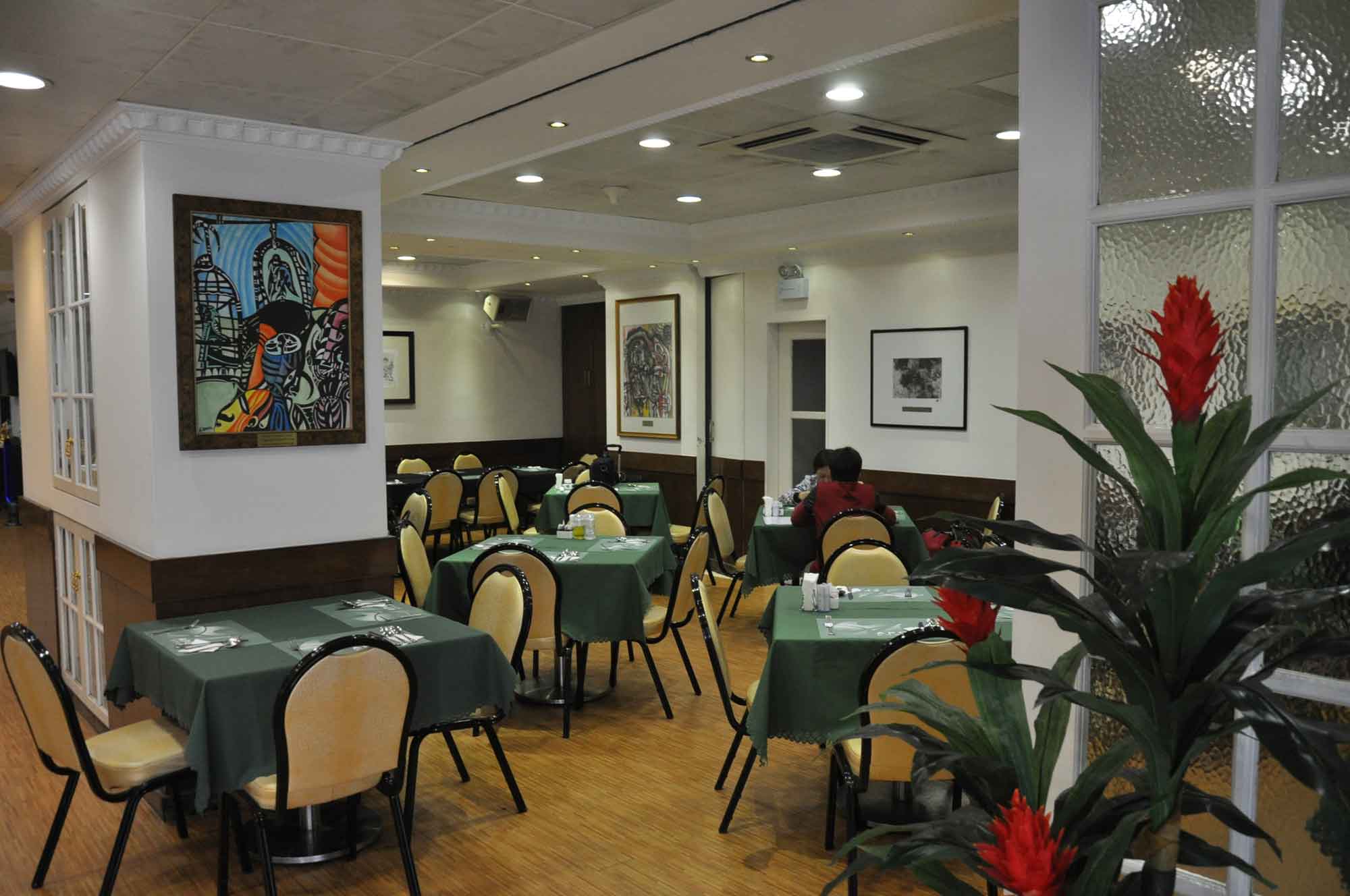 The menu is only in Chinese or Portuguese, so you might have to ask the friendly Filipino servers to help you translate.

First of all, those prices are cheap as sin and a throwback to how much things used to cost ten years ago.  And as good as the prices are, the food was even better.

I absolutely loved the stewed seabass, which was prepared in a gorgeous mixture of tomatoes, sausage, bell peppers and onions.

The fried bacalhau was spot on too, not oily at all and definitely better than how it’s done in 95% of other restaurants in town.

The octopus salad was of good size, full of thick pieces of meat and served in a terrific tangy sauce that made the whole dish work.

Jane gave me part of her roasted chicken and the meat slid right off the bone and onto my plate.  Done to perfection, it was moist, fresh, and simply magnificent.

We both loved every dish we had and agreed that APOMAC deserves 5 stars, especially when you factor in the prices.  Jane even thanked me after lunch for finally taking her to a great restaurant.  I mean I’ve taken her to the 8, the Tasting Room, the Golden Peacock, A Petisqueira and she only thanks me after Apo Mac?  I mean yes, it was very good, but damn she is one tough judge.

Anyway, for simple unpretentious food that tastes great and doesn’t cost a fortune, hit up APOMAC if you have the chance.  Our bill only came to $422 for two, or around $26 US a person.  With prices that low, it’s kind of like stealing.

After the race ended, Jane and I took a beautiful walk down the Praia Grande and Avenida da Republica for Henri’s Galley, a Macau institution that has been in business for over forty years.

I think Henri used to be in the Merchant Marines or the Navy where he worked as a cook.  After he left the service he went into business for himself, setting up shop on beautiful Avenida da Republica, straight across from Macau Tower. 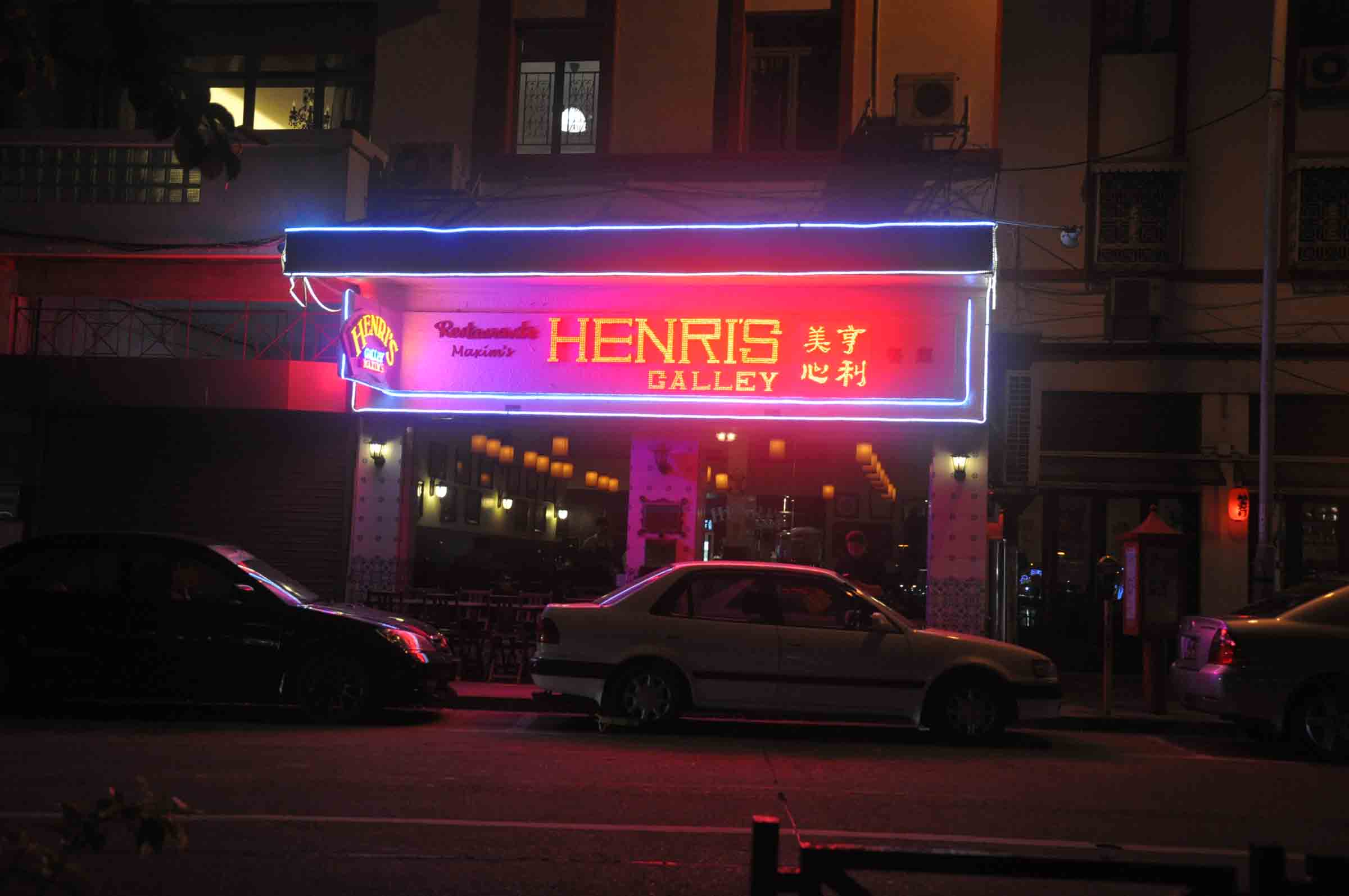 Henri has since passed the reins down to his son who runs the joint now and has straightened it out a bit.  Let’s just say that when his father was in charge the food could be a little inconsistent, due to some factors I won’t get into here.  That’s all been cleaned up now and the general consensus is that Henri’s Galley is back to top form. 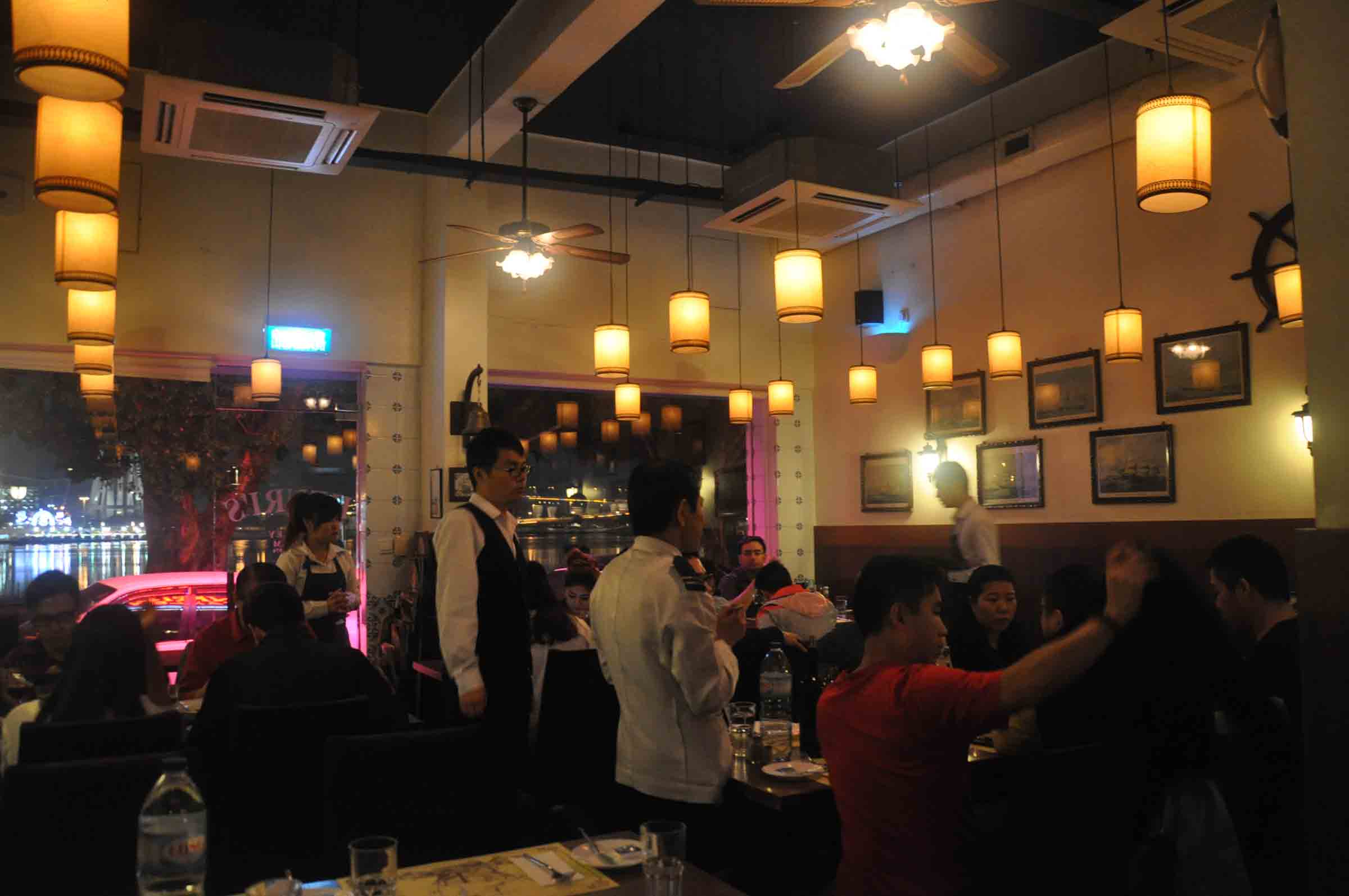 Since it was Grand Prix weekend I made sure to reserve well in advance and it was a good thing I did, because the restaurant was full when we arrived at 7 pm, as it often is on Sundays.

Right in line with the nautical theme, the lights were turned down way low, kind of making it feel like we were in the hold of a ship. 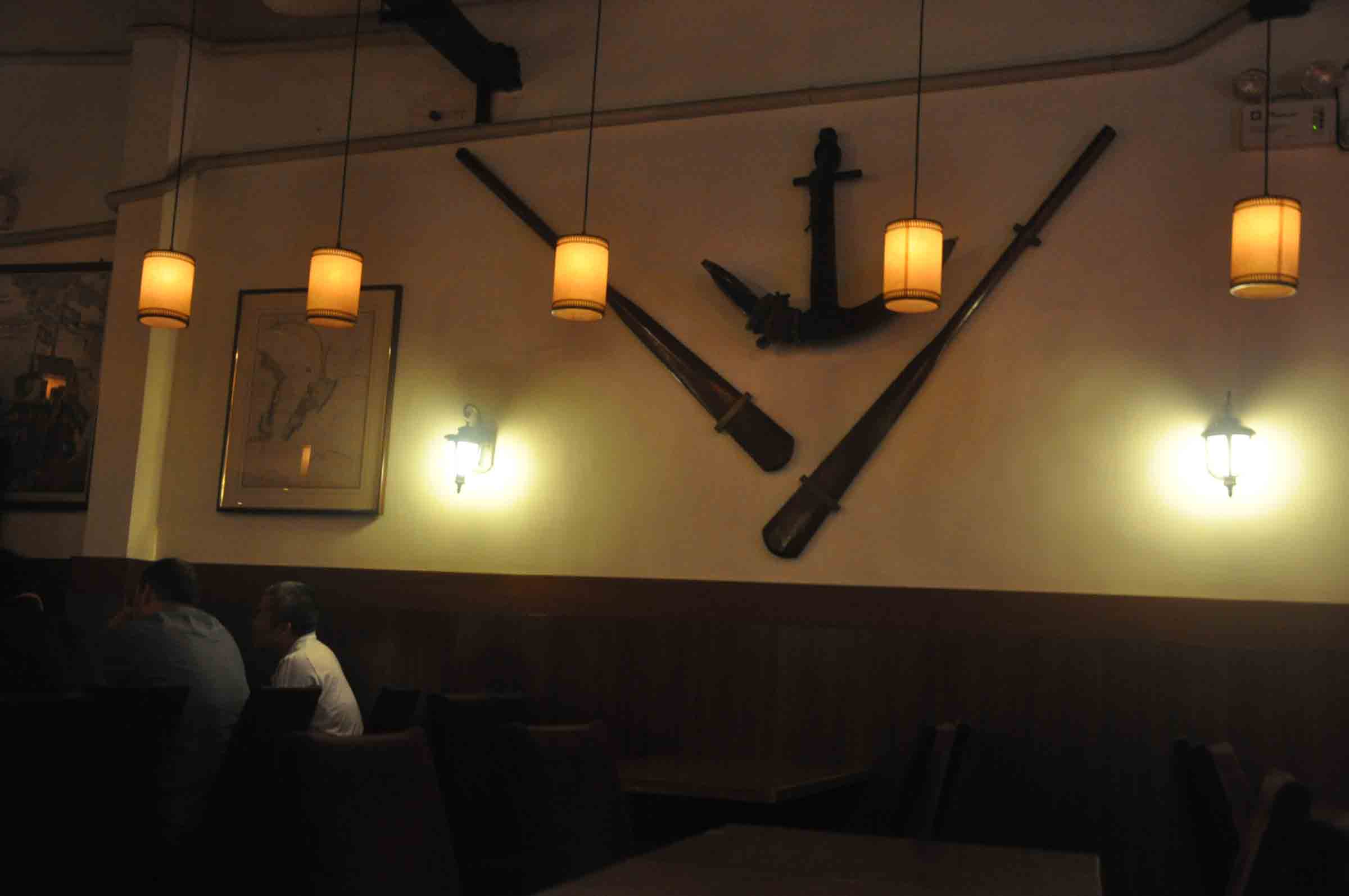 With so many photos of boats, anchors, oars, and sailing knots around the restaurant, I think Henri’s Galley could make for a pretty decent Maritime Museum should the one beside A Ma Temple ever close down.

Jane and I both got a blast out of watching the head waiter work, the only member of staff who was wearing a Captain’s uniform with shoulder boards.  He knew the clothes he was in put him in charge and it was quite obvious that he relished the command.   Perhaps slightly pushy and a little rude in a completely inadvertent way, both Jane and let his abruptness slide, knowing that no man wearing side boards like that can be taken seriously.  It was actually interesting to observe him from afar, a little man in big side boards, an Officer waiting tables in a restaurant.

After perusing the menu, we ordered one soup, two salads, one Macau Sole and two chicken mains: African Chicken for yours truly while Jane tried Baked Portuguese Chicken and Rice.

The mains were the definite highlights and the main reason why I give the restaurant 4.5 stars.

African Chicken might be the most classic of all Macanese dishes and Henri’s Galley probably serves the best one in town.  The recipe is printed on the table so you can even try to make it yourself at home if you’re feeling adventurous.  The sauce was absolutely perfect – spicy but not overly so, and strong, but not to the point of domination.  The meat was so tender that it almost fell off the bone and when combined with the sauce the taste was pure perfection.  Be sure to order a bowl of rice as well, because the extra sauce you’re left with after finishing the chicken goes fantastic on top of it.

Jane’s baked Portuguese Chicken was outstanding as well, perfectly done and prepared with just the right amount of seasoning and spice.

Much like my African Chicken, the serving size was large enough to serve two people without a problem.

As for our starters, the salad and soup were both pretty good while the Macau Sole was another excellent choice.

Fresh and light, it’s wasn’t too oily, which is what most fish dishes in Macau (read: bacalhau) tend to be.

Henri’s Galley carries the reputation of being a top Portuguese restaurant and our meal there did nothing to contradict that.  A nice setting mixed with great food at good prices is a combination that will work every time.

The Macau government must have known that Jane and I would conclude our Grand Prix Weekend down near Macau Tower so they saw us off with a fantastic display of fireworks. 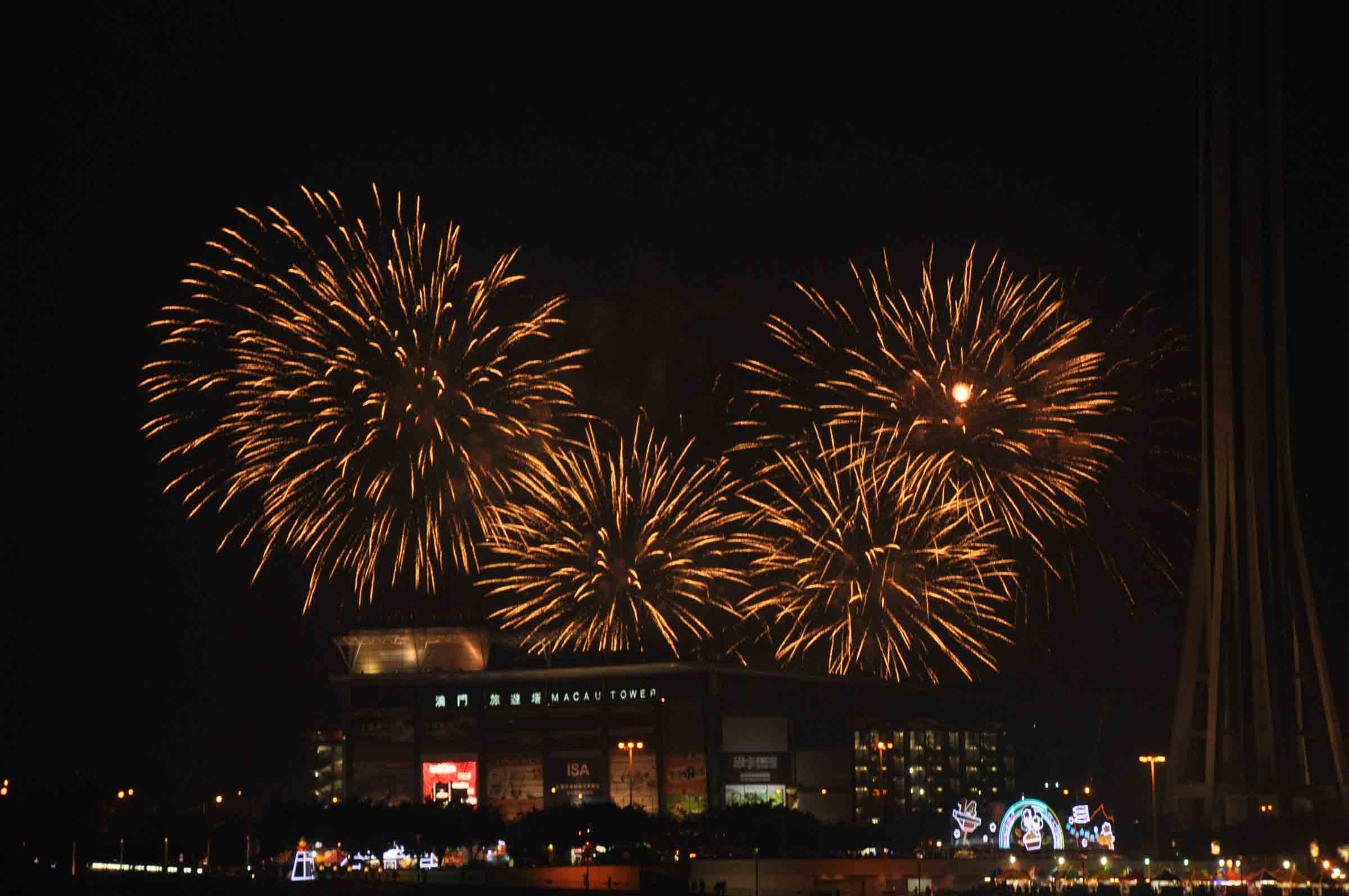 Thank you Macau for another wonderful weekend!