Mu Yi and I had such a great time on our first trip in March, that we decided to do it again four months later.  We opted for a more leisurely approach this time around, not wanting to overextend ourselves outside in the 40 degree summer heat.  As with our first visit, the goal of the trip was to show people that Macau is so much more than just casinos, St. Paul’s Church, and almond cookies.  And despite what is often said on the mainland, you definitely can’t see the city all in one day.

Covering 4 days from August 14th to August 17th, 2012, this trip report contains information on 3 hotels, 7 restaurants, and a slew of other scenes and sights.  Let’s get it on!

The first day of the trip was going to be the busiest one, with most of our time spent around Tap Seac Square and the area just South of Mong Ha Hill.  We started off though by checking into our hotel.

I think anyone who comes to Macau needs to stay at the Lisboa once, even if it’s just for a night.  They can build all the Wynns, Venetians and Galaxys they want, but none of them will ever become synonymous with the city the way the Lisboa has.  In terms of classic Macau landmarks, it’s right up there with St Paul’s or A Ma Temple.  (And that’s just not hyperbole.  On the sculpture on Taipa Pequena that’s representative of Macanese life, check out what’s beside St. Paul’s.) 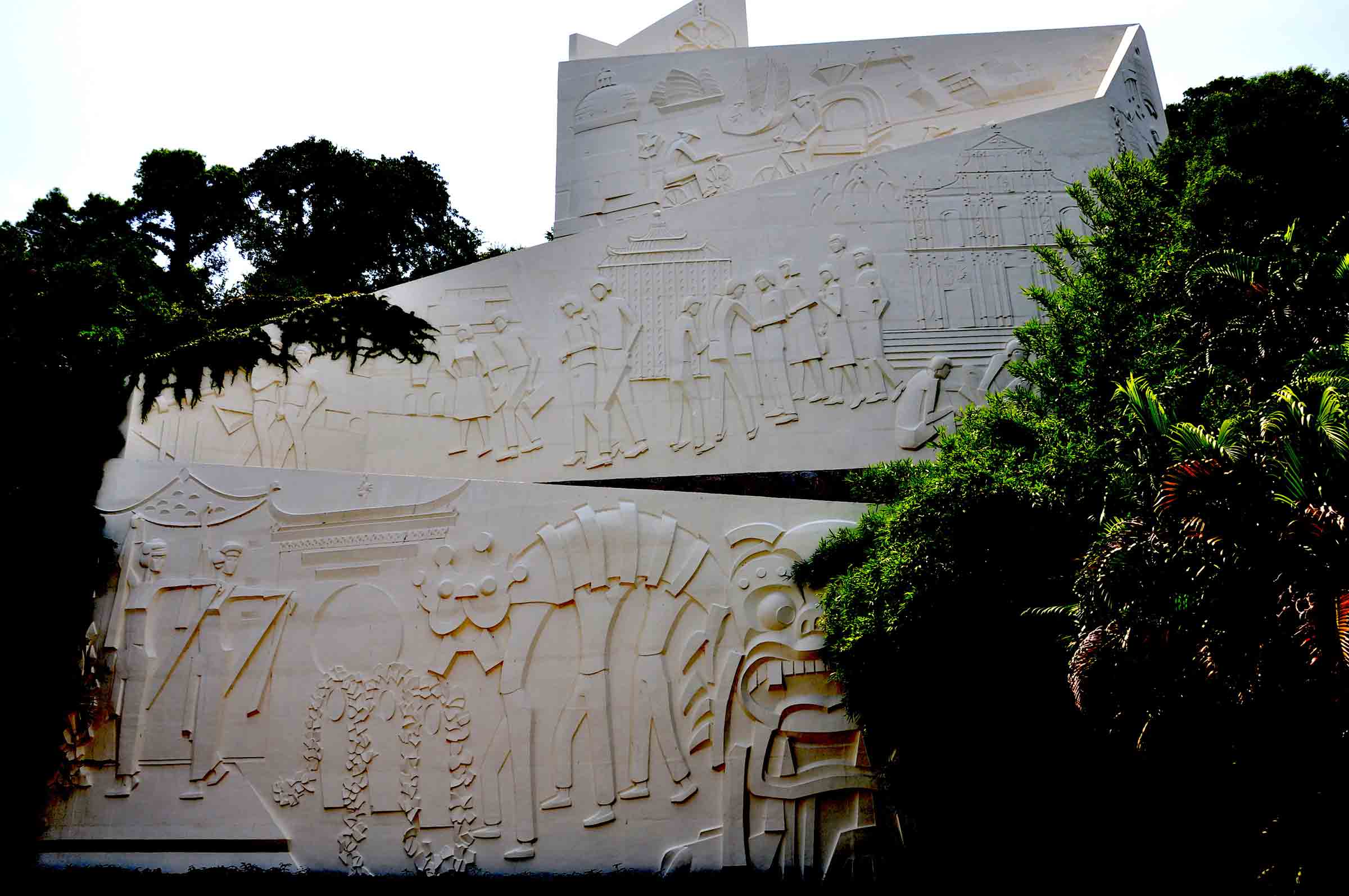 It is, of course, the venerable Lisboa, Stanley Ho’s tacky kitsch Pineapple Prince, the high home of gaud and gaming since 1970.

That all changed in 2002 when gaming licenses were handed out to five other companies and SJM had competitors for the first time in four decades.  Within a few years, the Wynn, MGM, and Starworld all had the Lisboa looking its age, and SJM put the final nail in the coffin themselves when they built the Grand Lisboa in 2006. 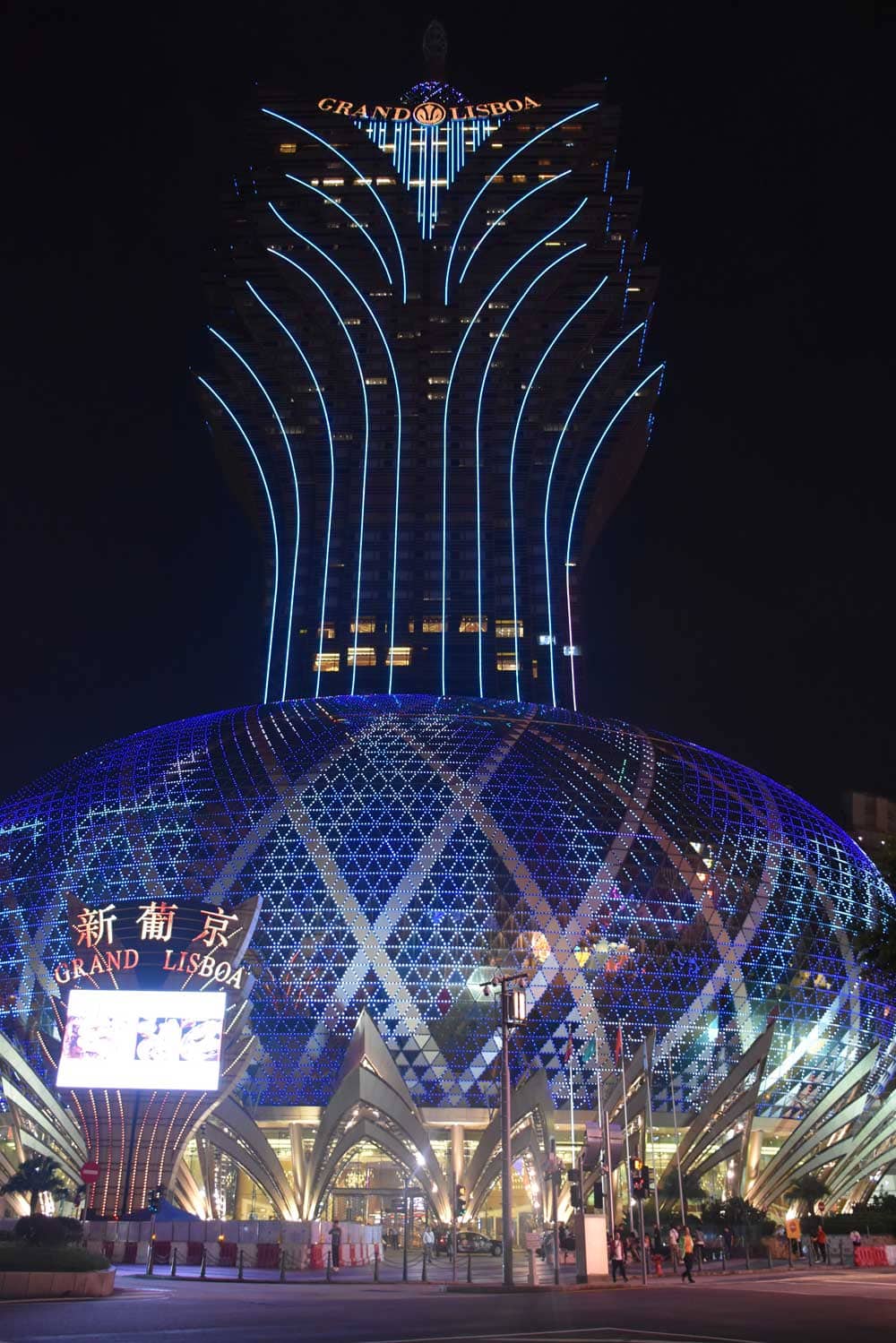 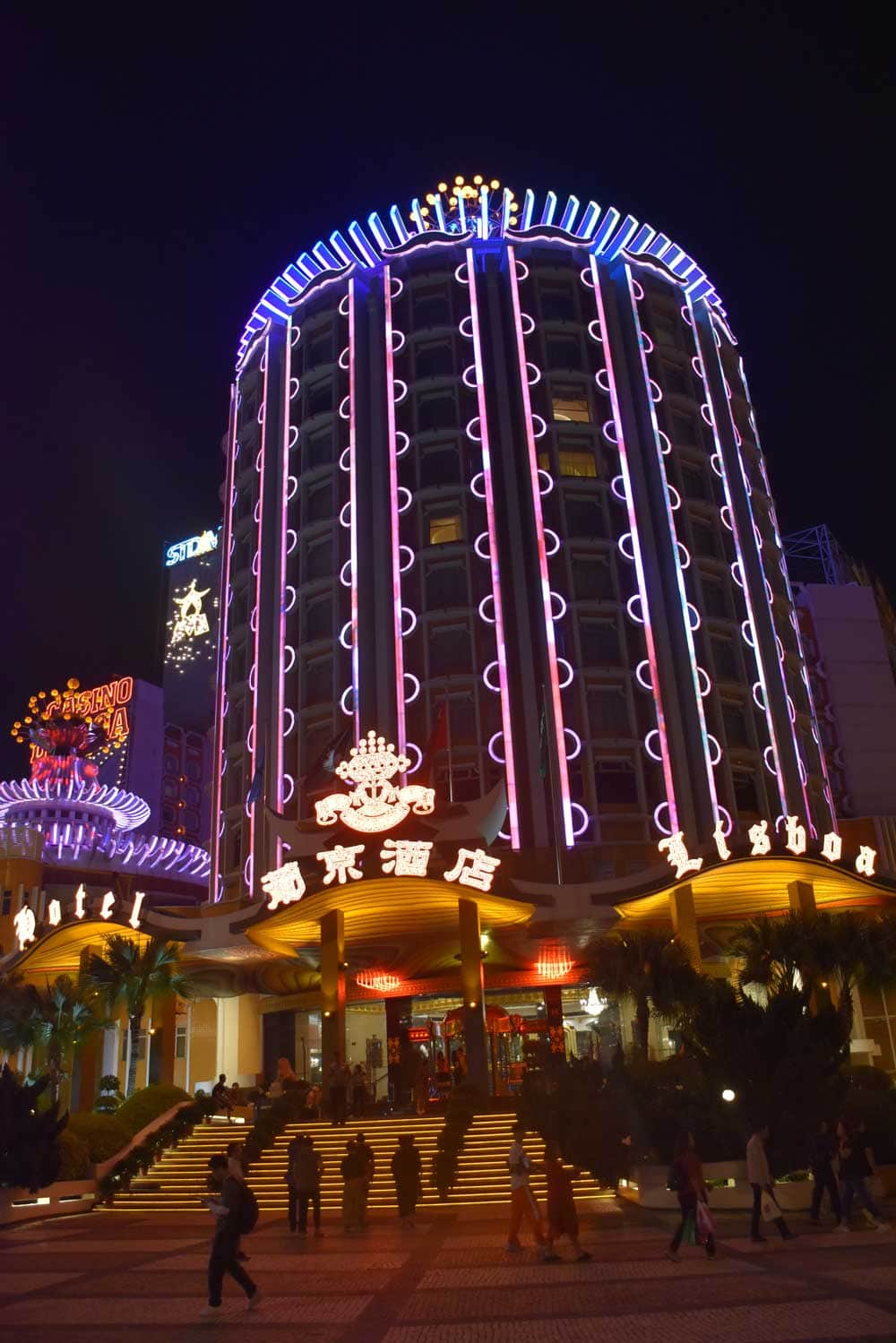 The Lisboa sits in the Grand Lisboa’s shadows both figuratively and literally, a wonderful side by side contrast pitting the old against the new, the valued versus the discarded.  (As if that wasn’t enough the Grand Lisboa also stole the the Lisboa’s signature Crazy Paris Show and its most famous restaurant, the 3 Michelin starred Robuchon A Galera – now Robuchon Au Dome).

But as these things usually go, I’ve never had much interest in staying in the Grand Lisboa.  The simple reason being that it’s not much different than any of the city’s other expensive 5 star hotels, and if I’m going to drop down that much money on a place to stay, I’ll gladly go all in and stay at the Wynn, the best hotel on Macau peninsula.  The Lisboa, on the other hand, has always piqued my interest, and now qualifies as one of the better value options in town.  Cheapest rooms run $1138 HKD Sunday to Thursday which is only $30 US more than bona fide Amizade strip budget options like the Fortuna and President, two hotels that good and rightly qualify as gum on the Lisboa’s shoe.

Wanting to start the trip off in style, I decided to spend a little more money and booked a room in the Royal Tower, which cost around $1600 then.  (Update: it’s now only about $1400 a night, a nice decrease five years on.)  Mu Yi and I tried checking in extremely early, at only 9 am, not sure if we could do it so soon.  Luckily the front desk said it was okay and we were in our room in no time.  And what a room it was….

Straight out of the 70’s with love, Mu Yi and I both dug the antique furnishings, brown-blue colour scheme, and retro charm. 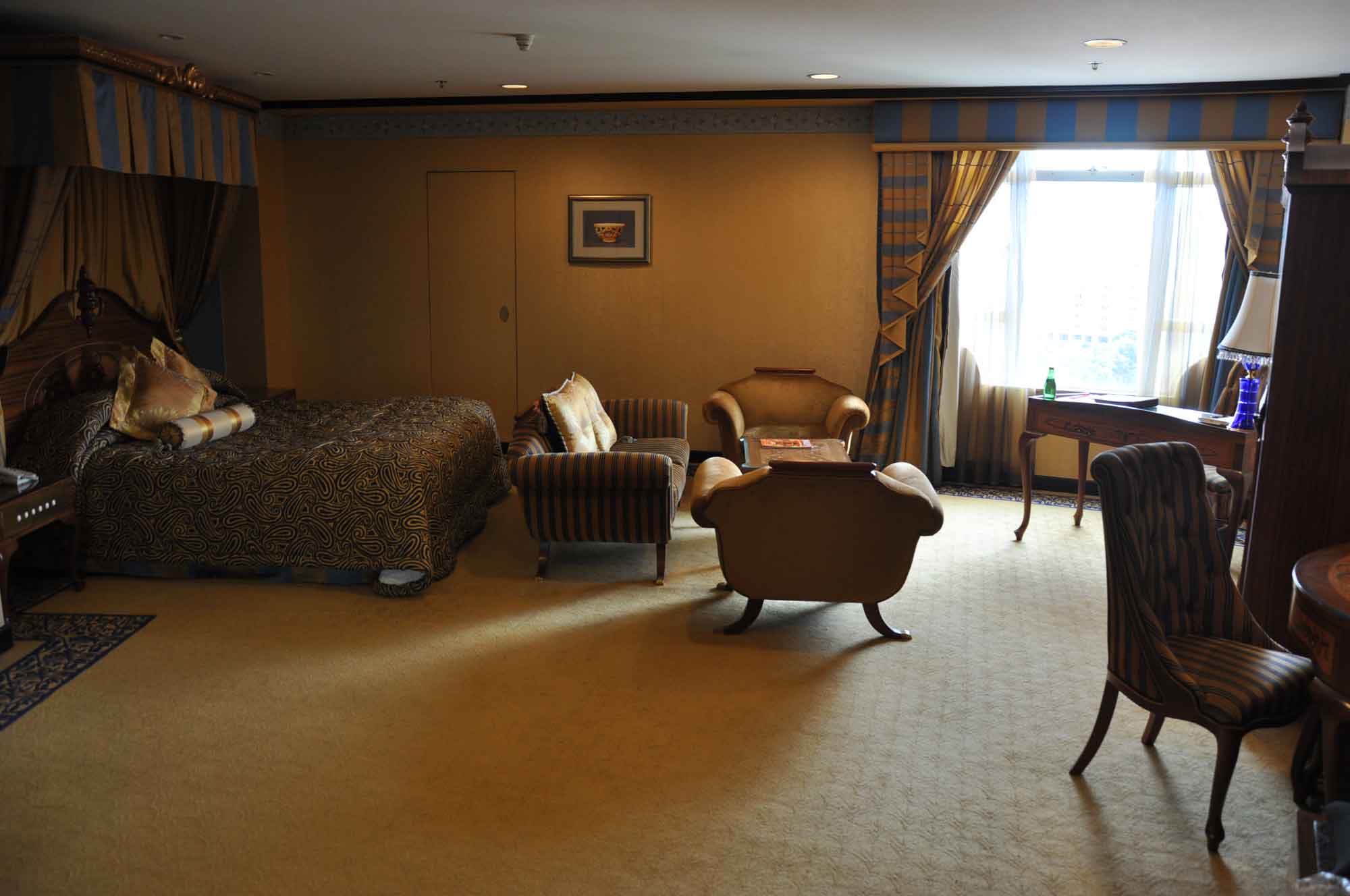 The wood furniture, in particular, was simply spectacular, supremely crafted and decorated with beautiful patterns and designs.  Although the style was certainly dated, it was extremely classy, and also refreshing in a way. 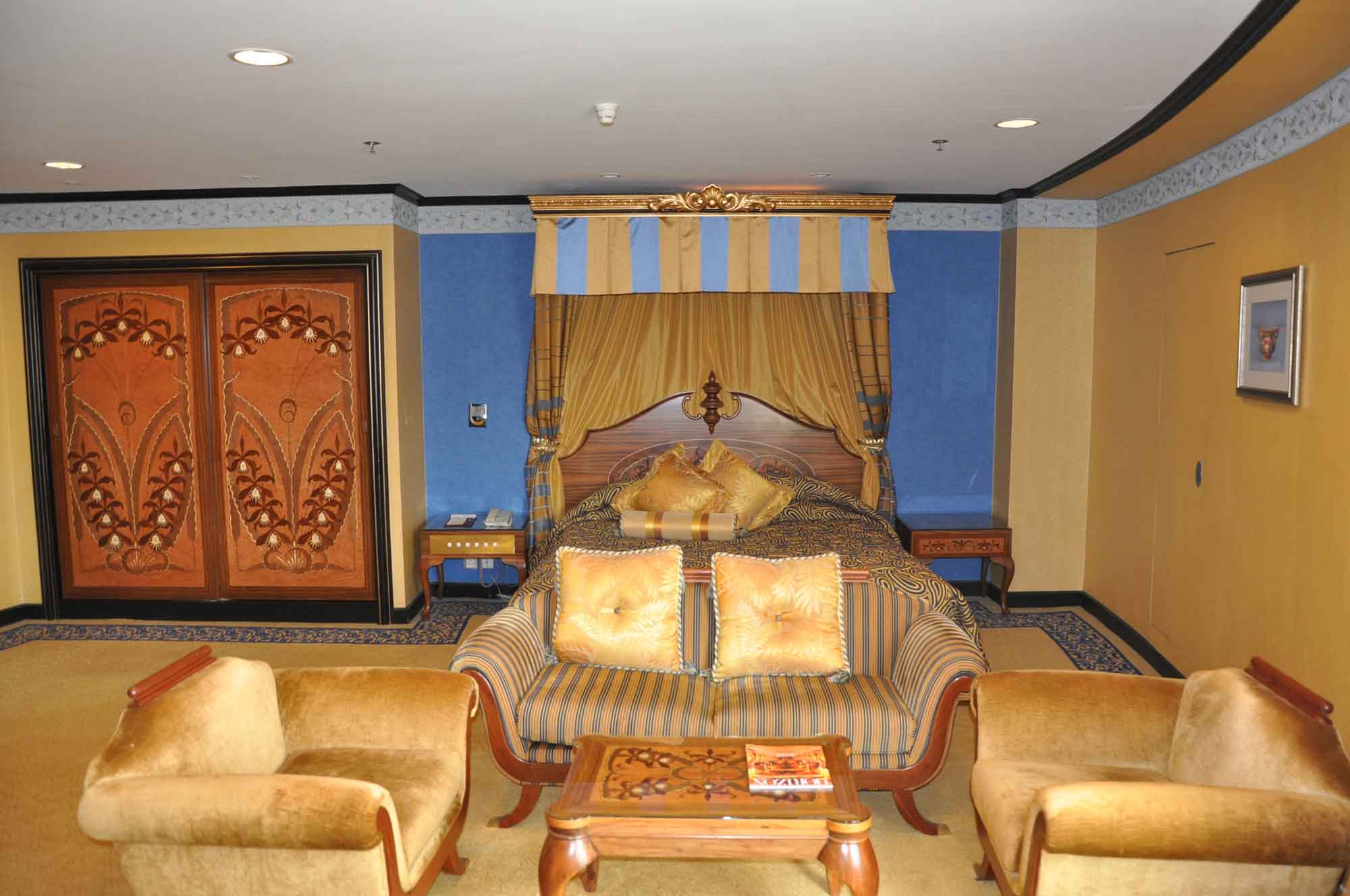 It’s one thing for hotels nowadays to market the past and sell history, but quite another to actually be old, or have things from that era. 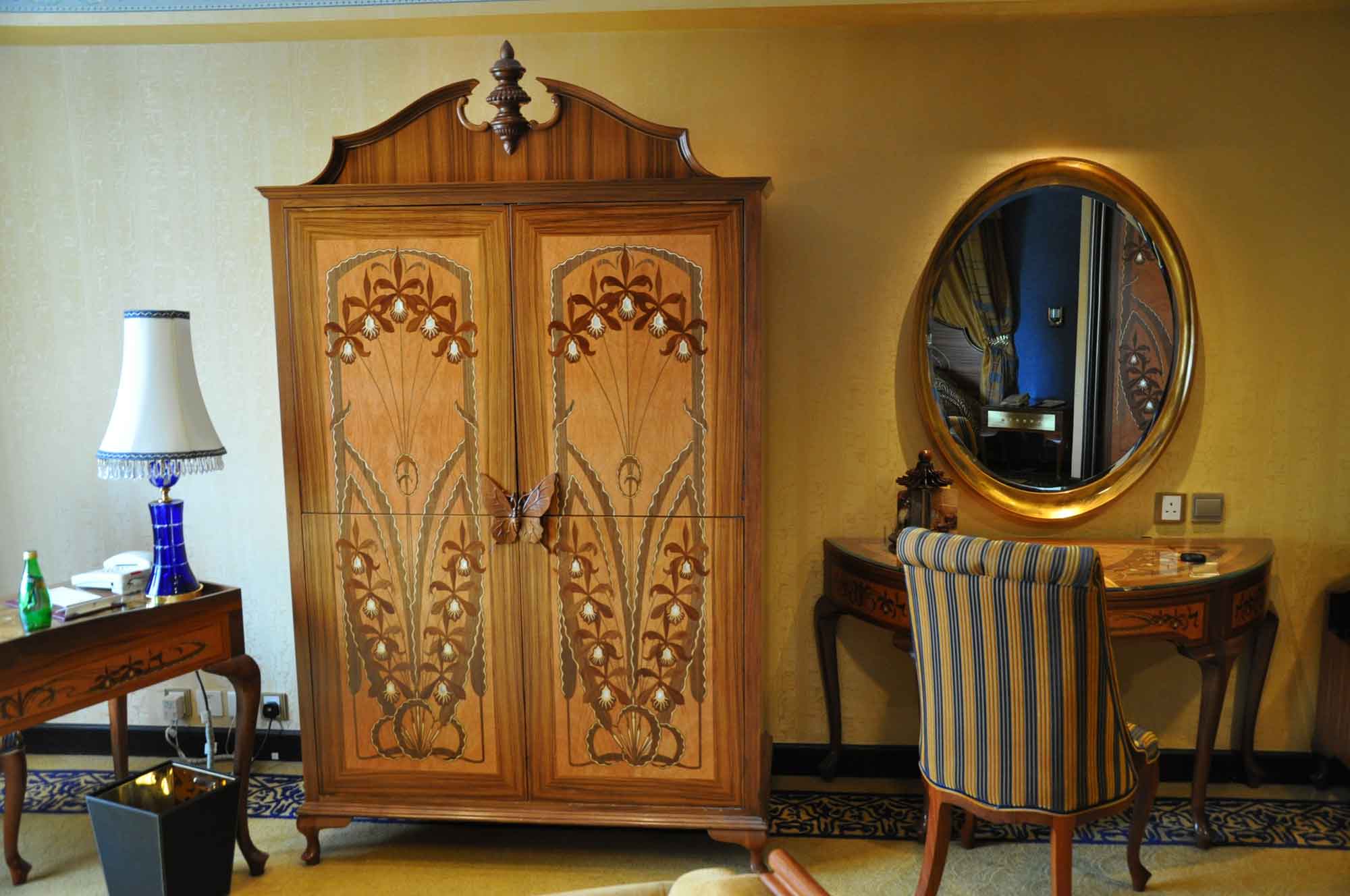 The only part of the room that looked like it belonged to this century was the bathroom, which was completely new and modern. 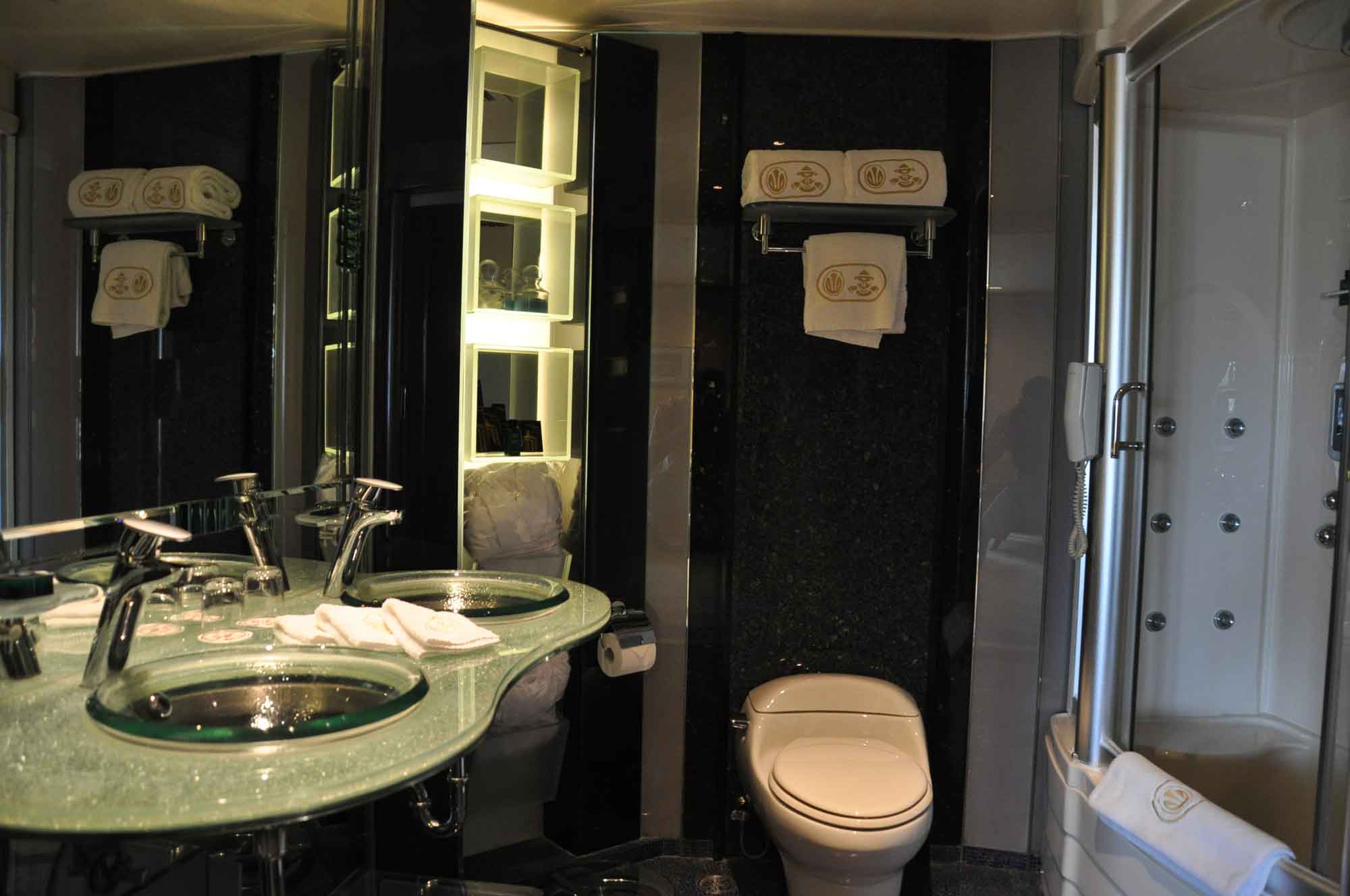 Done up in marble, there was a large jacuzzi tub, and no signs of mould or filth that is often part and parcel of older hotels. 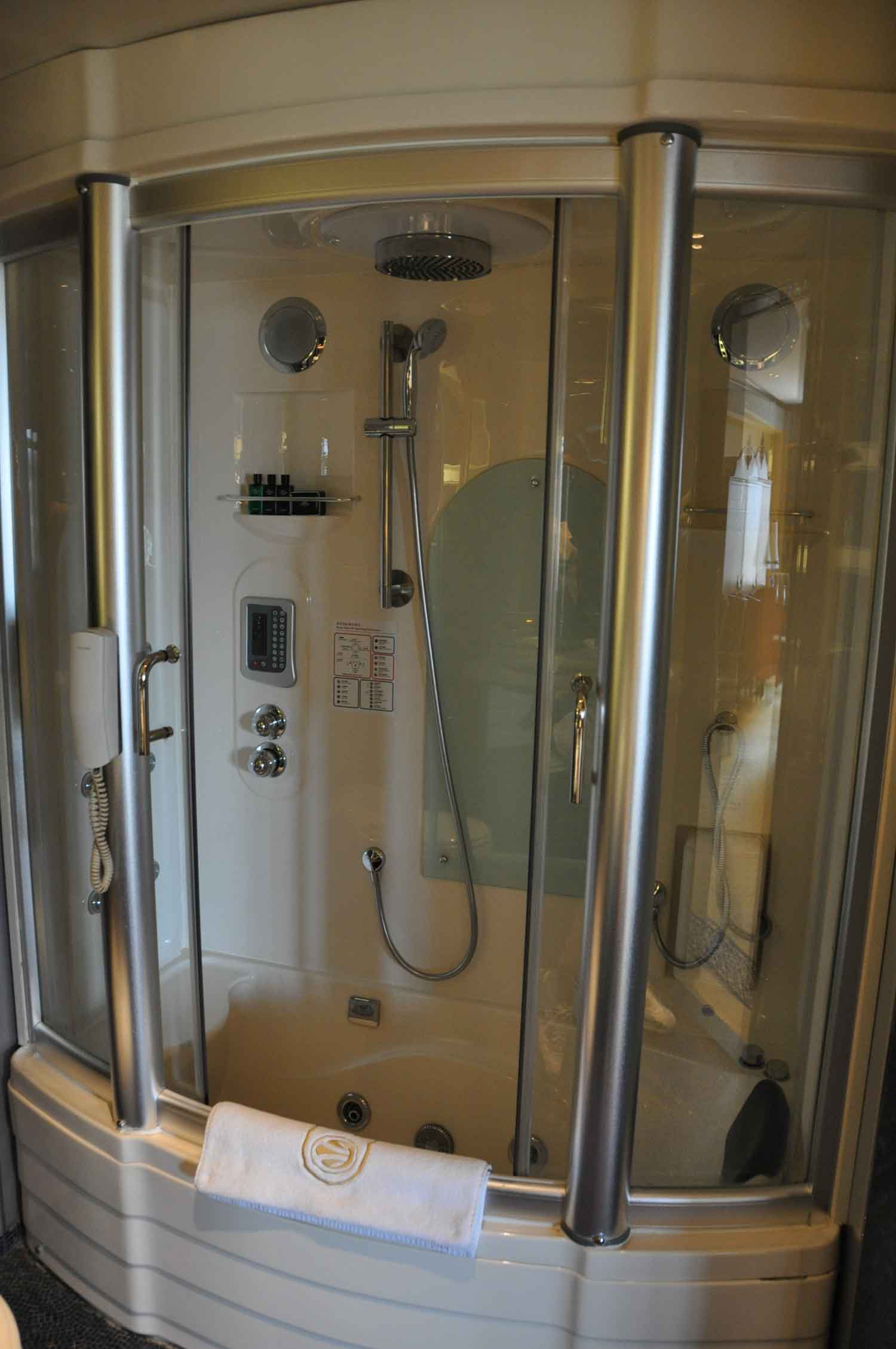 For more information on what specific things the Lisboa has to offer, in terms of dining, facilities and gaming, I’ve written everything you need to know in its casino review here: Lisboa. 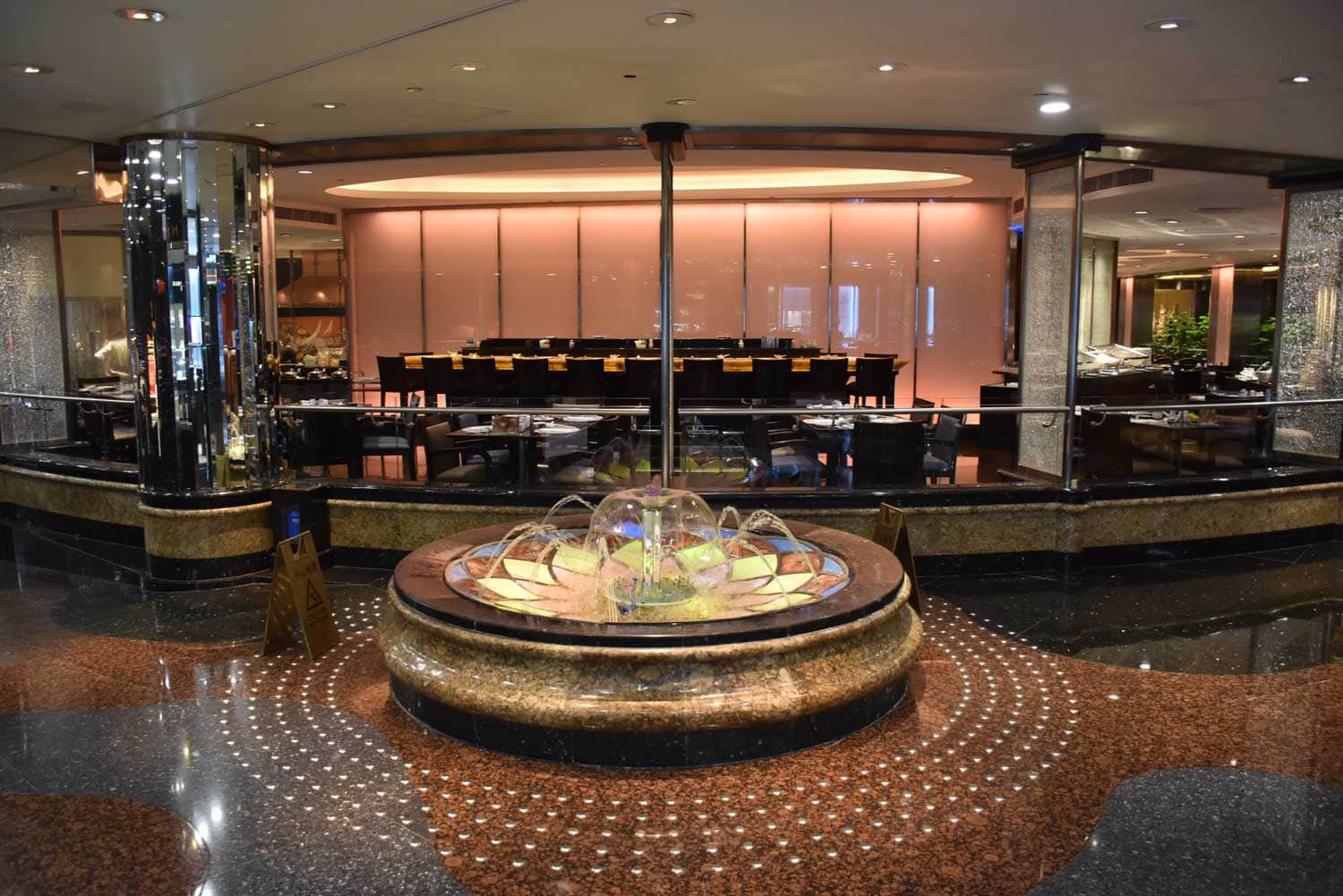 Meanwhile, I’d like to close with one last thing.  Going into the Lisboa does feel a little like going back into time, and I think that’s a good thing, considering what Macau has become over the past 10 years, in terms of hotels anyway.  The Asian way seems to be bigger is better, style can’t be subtle, excess is not enough.  Thus you have the Eiffel Tower going up in Cotai now, along with the gross monstrosity that is the Lisboa Palace, not to mention the Wynn Palace that’s a more outlandish version of the one on the peninsula that just copied the one in Vegas….  I mean, where’s the originality?  And when’s it all going to end?

The Lisboa, on the other hand, doesn’t need to window dress or do any of that cheap shit.  Its quality owes itself directly to authentically superior design and decor, particularly in the two lobbies. 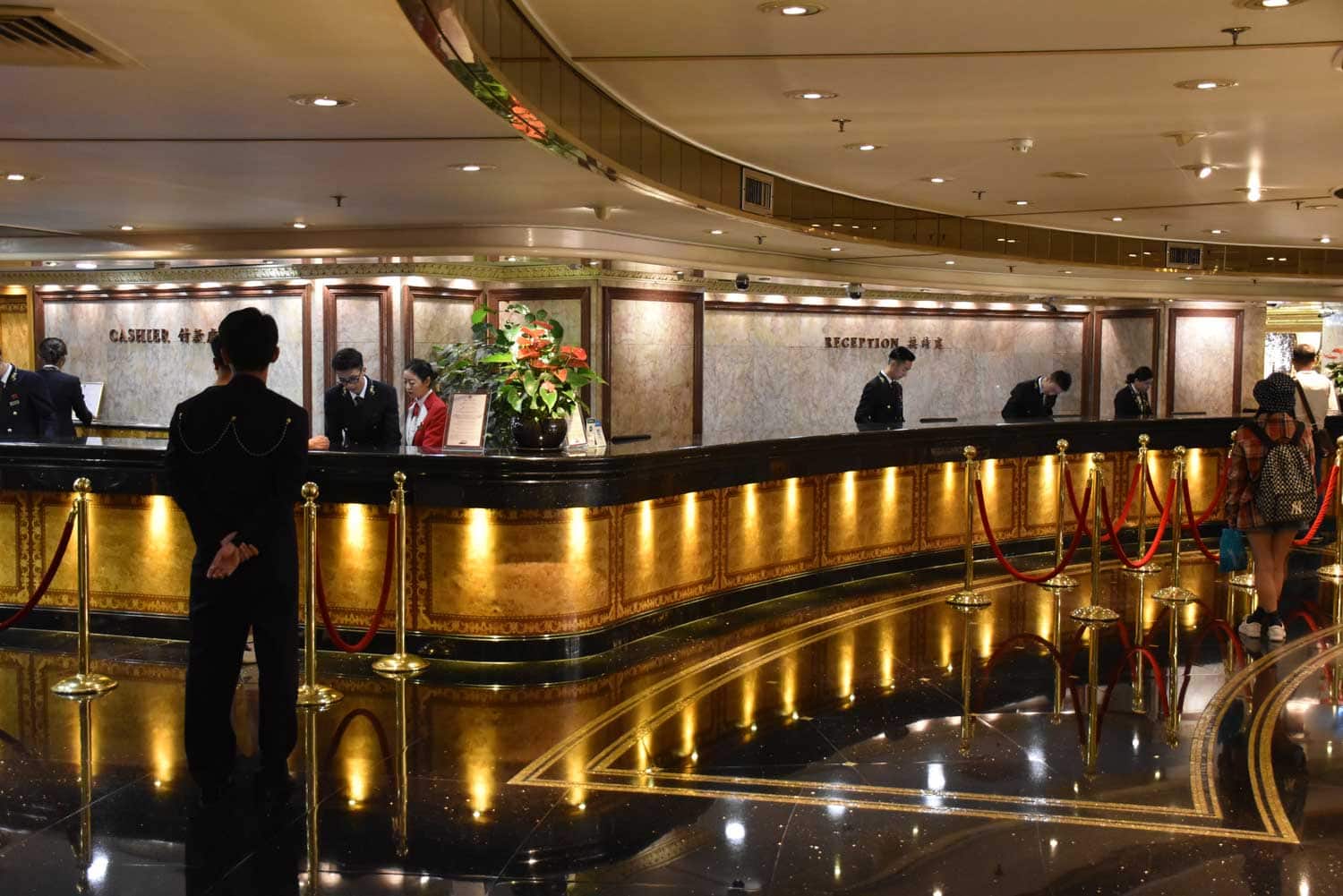 Couple that with the extensive assortment of art, antiques and jade displayed throughout the hotel and you have a property far removed from budget status, even though it just about charges budget rates. 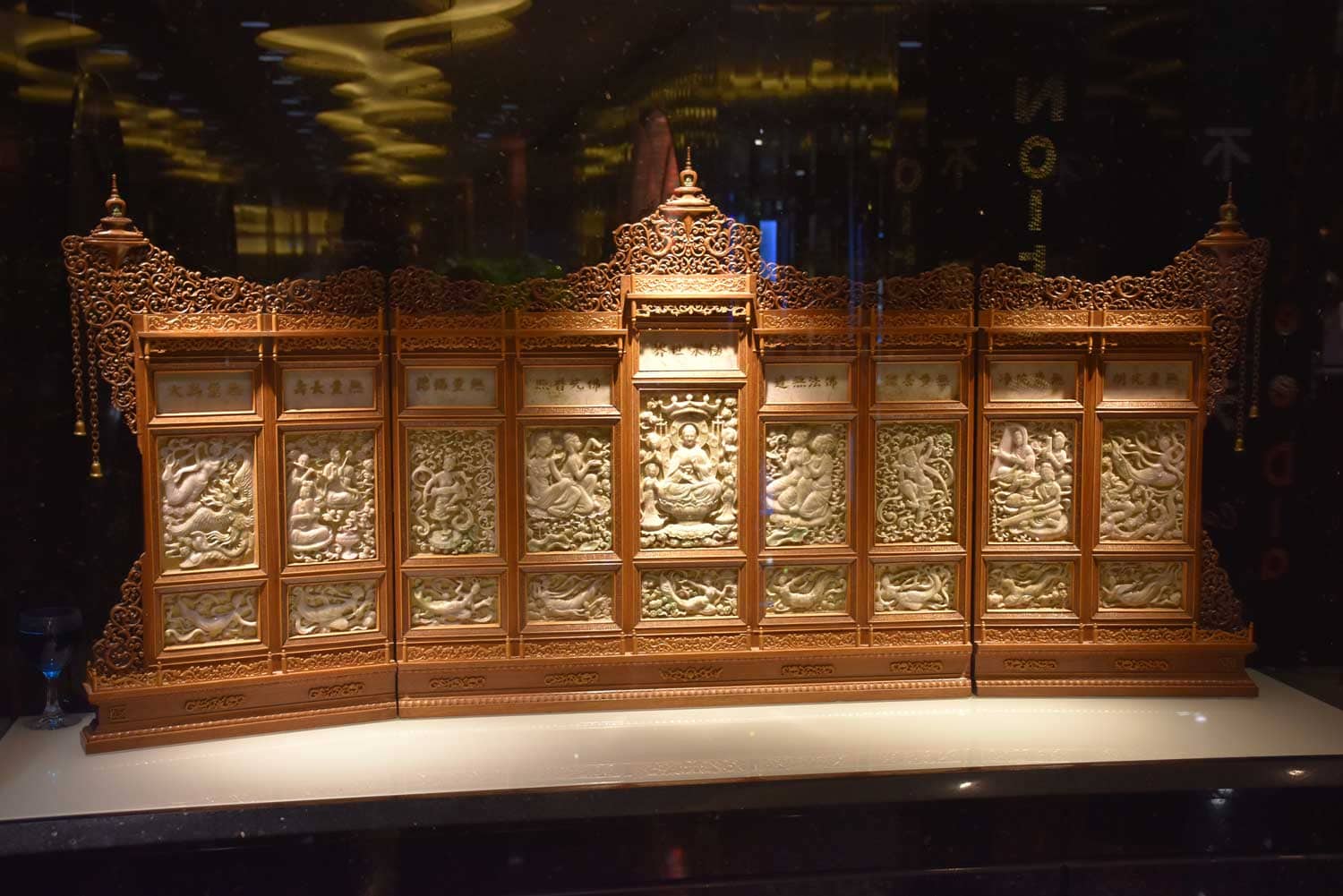 Mu Yi and I both loved our time there, and wished we’d stayed longer than one night.

After checking in and getting settled, it was time to start our day’s activities.  Mu Yi’s favourite picture of mine is the one that used to be on the front page of the website, this one: 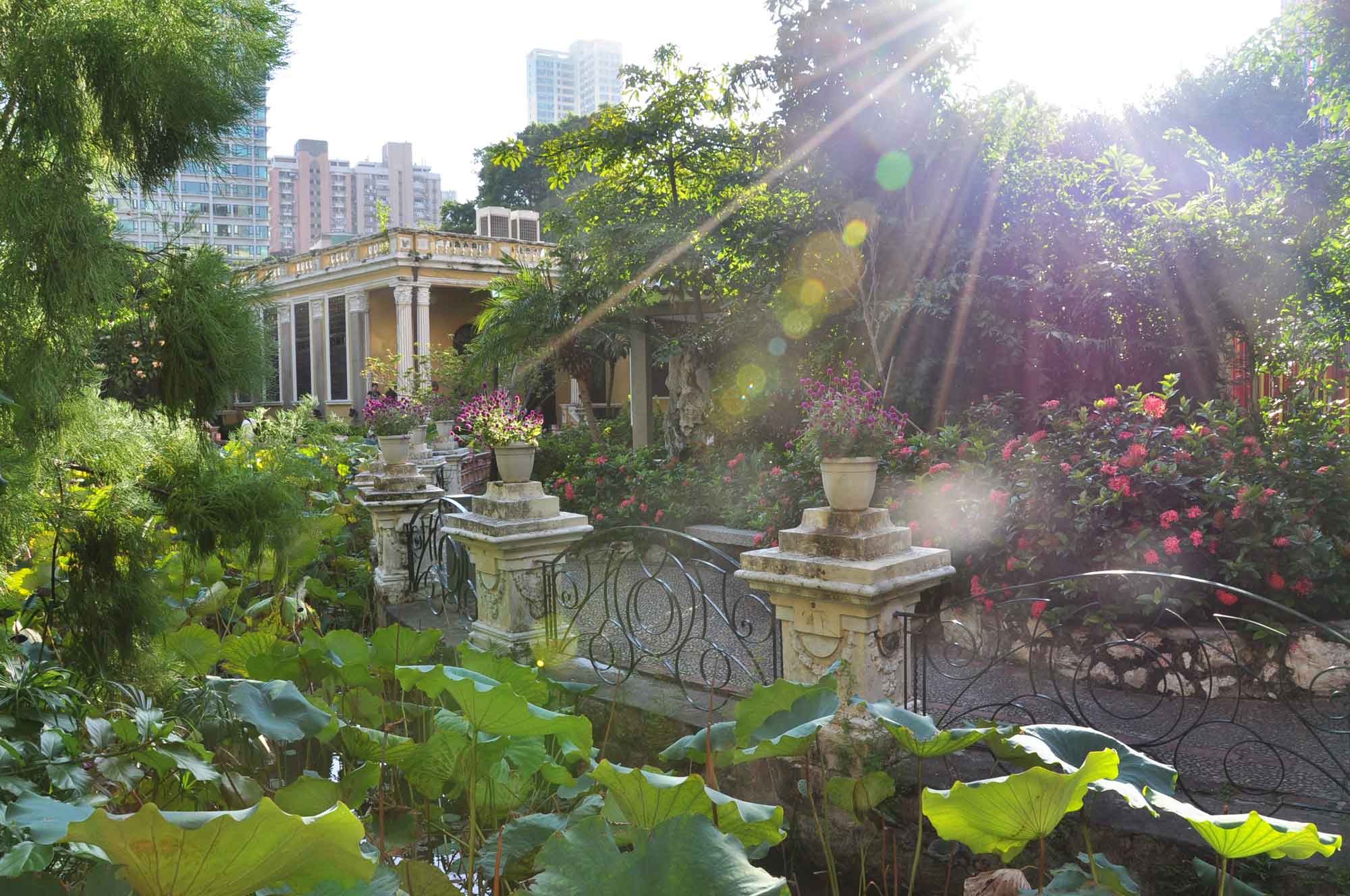 It is, of course, of Lou Lim Ieoc Garden, Macau’s prettiest park by a country mile.  My Yi had never been there before, so our morning began there.  Only a twenty minute stroll up Rua de Campo from the doors of the Lisboa, we arrived at the park gates at about 10 am. 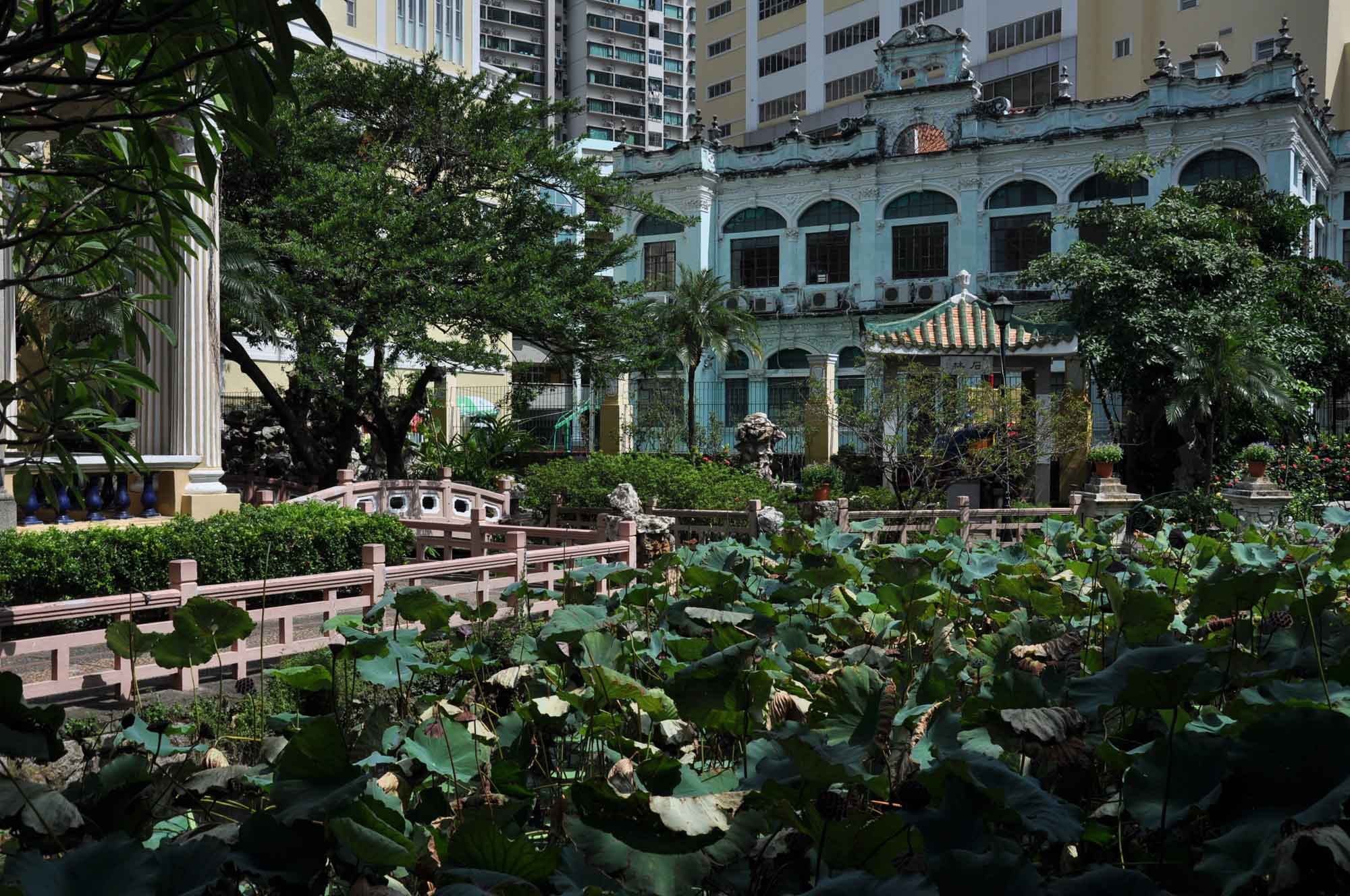 The largest private garden ever constructed in the city, Lou Lim Ieoc Garden took 21 years to build and was completed in 1925. 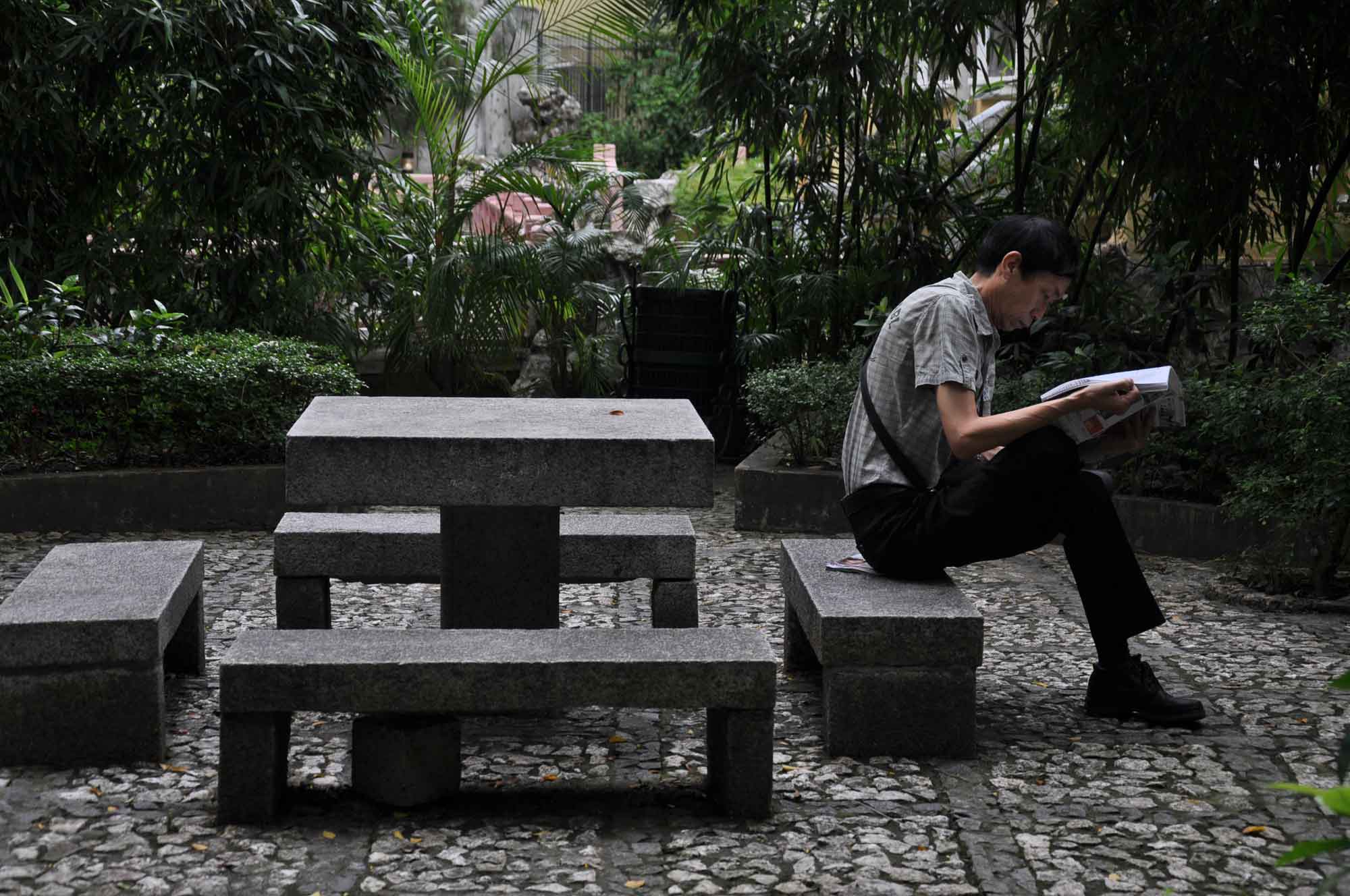 In 1974, the Portuguese government purchased it and turned it into a public park, the one you see today. 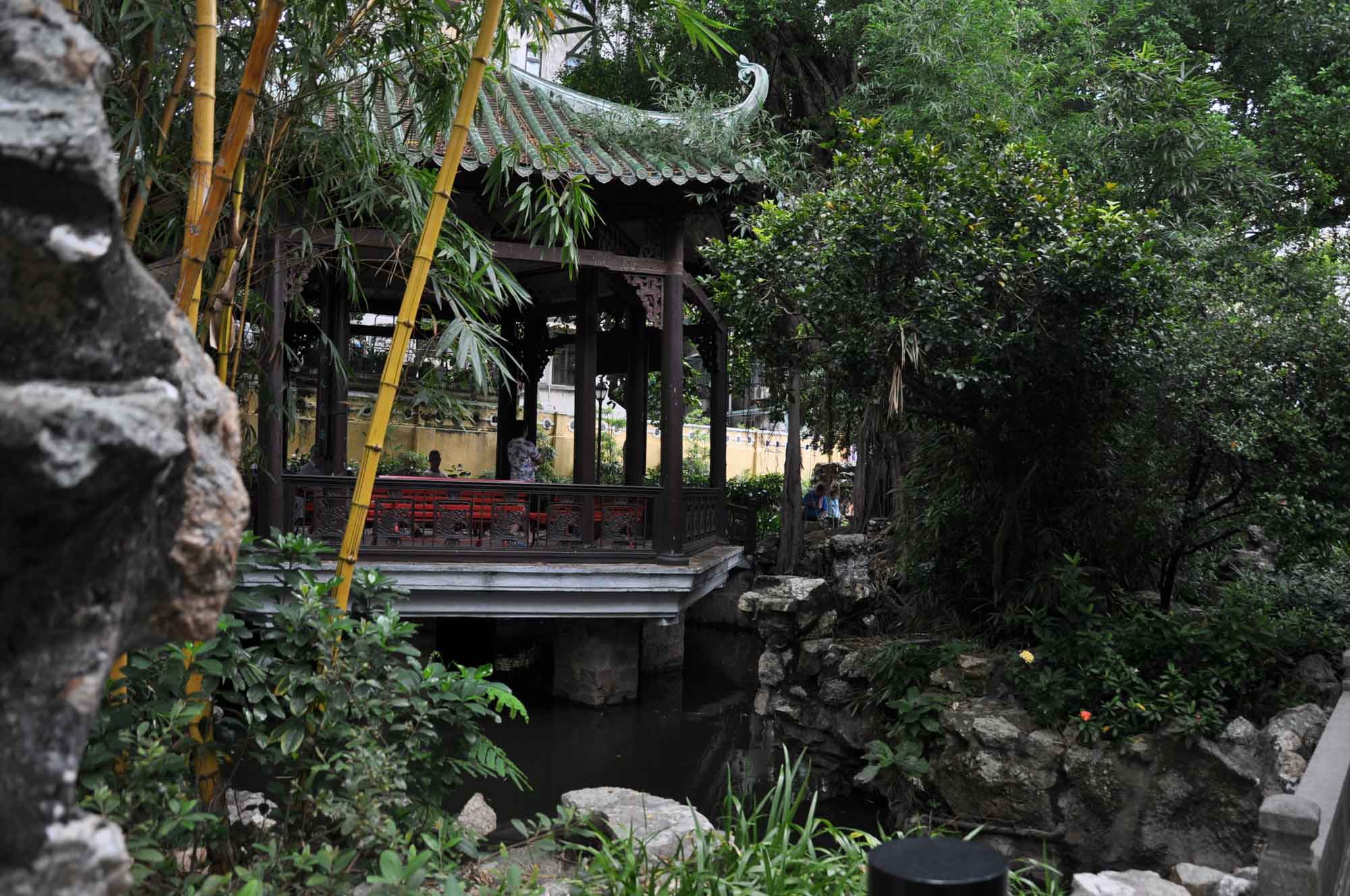 Taking up only half the size of the original grounds, Lou Lim Ieoc Garden is still fairly big and full of plants, pavilions, rock formations, and bridges, all finely maintained and in excellent condition. 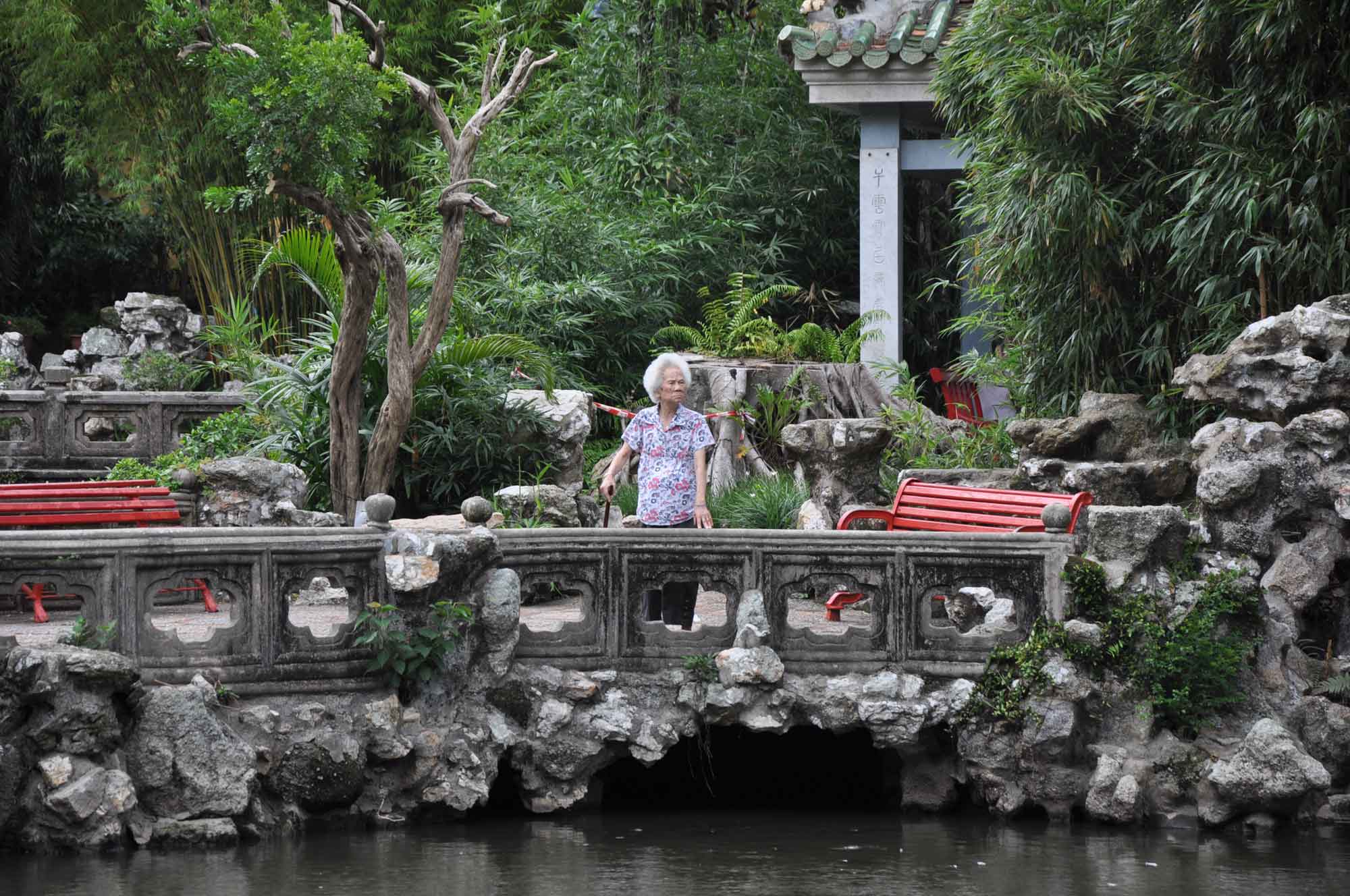 Very similar to the parks in Suzhou, the park is a must see for nature enthusiasts or anyone who enjoys peace, solitude and natural beauty. 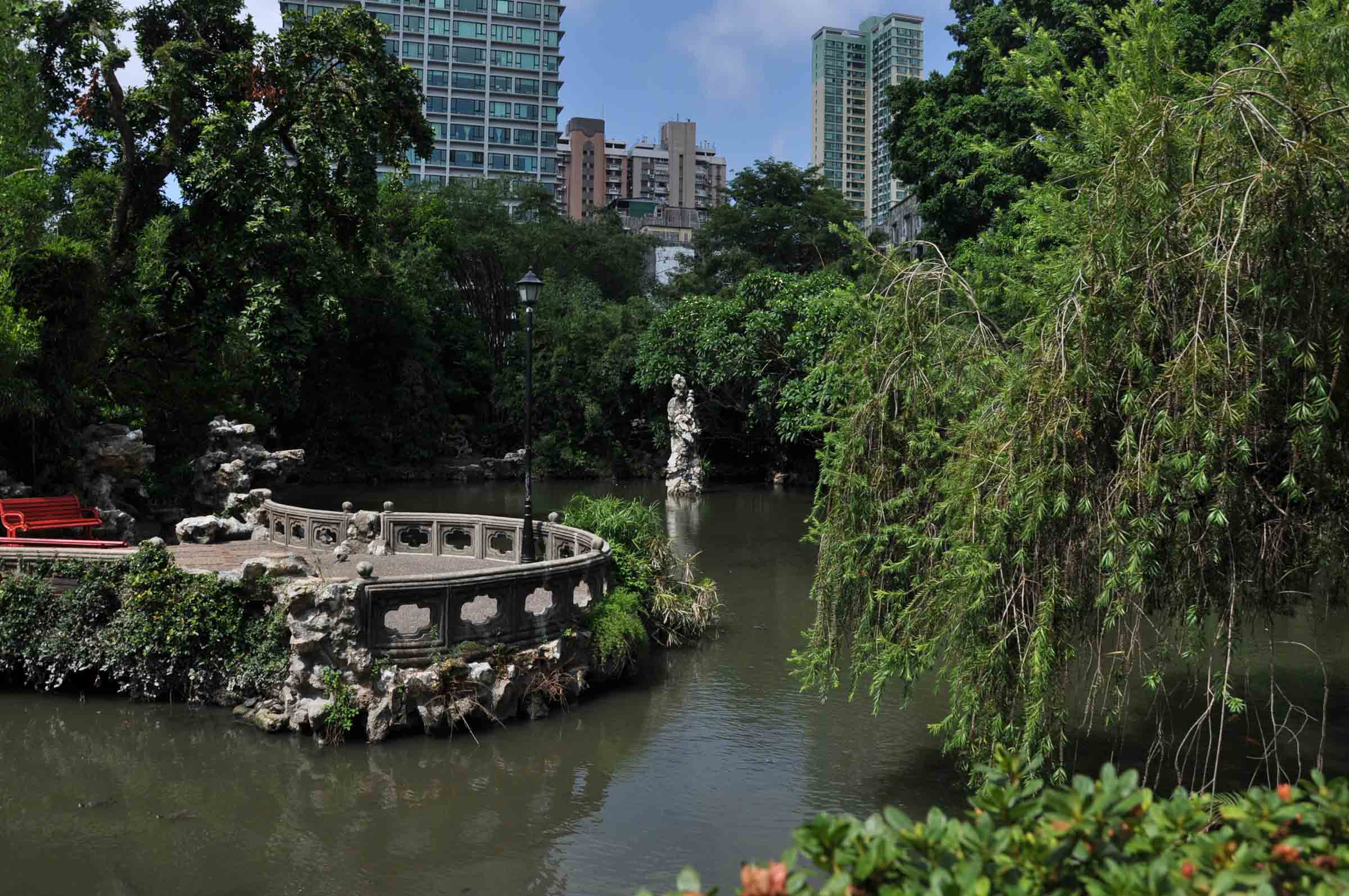 The big yellow building in the middle is always home to some sort of exhibition; in our case, it was a display of Chinese calligraphy, an art form I do not understand. 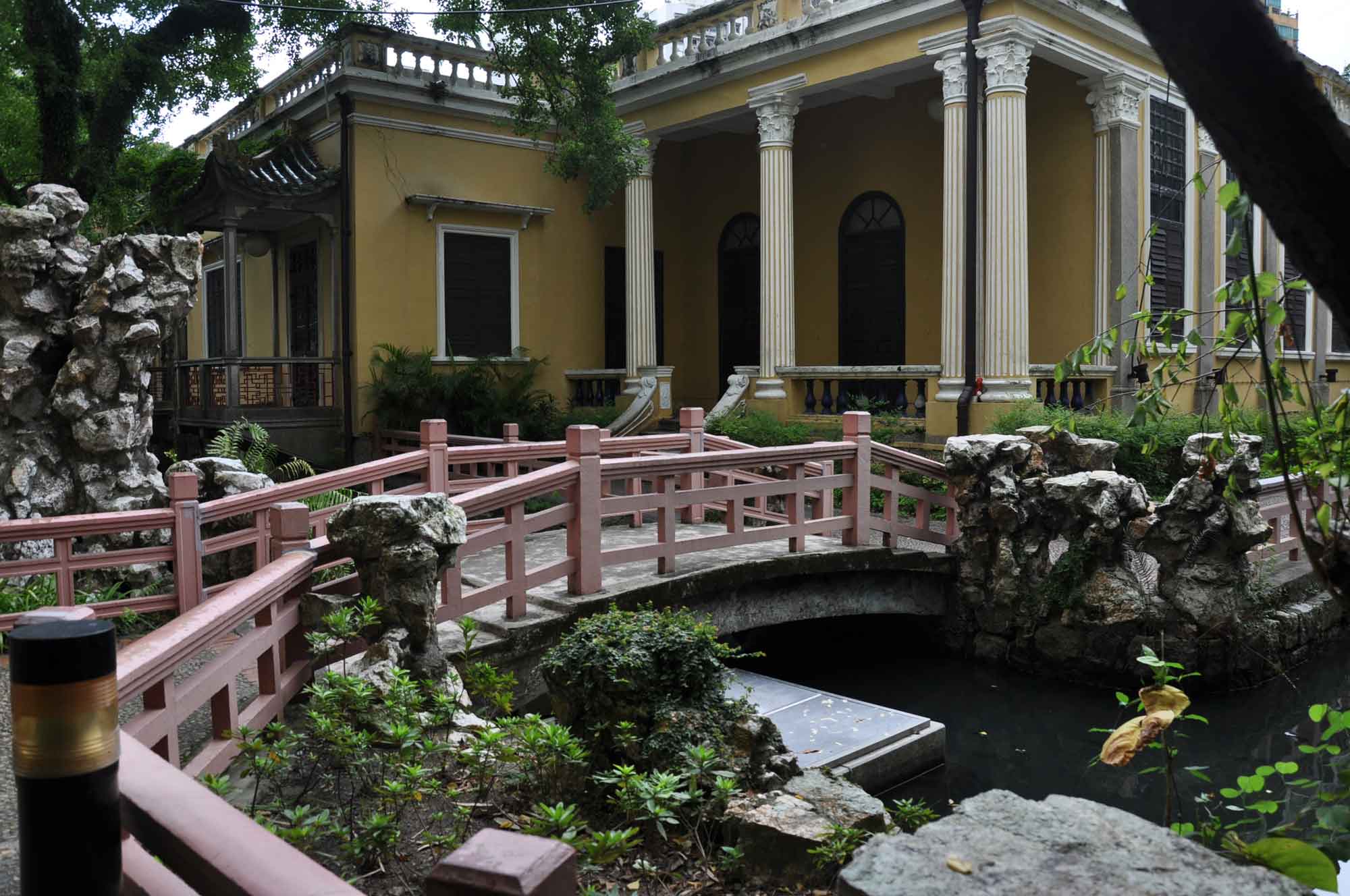 Mu Yi said it was because I was a Westerner, but I don’t care what language you’re writing in, good penmanship is not something I consider to be a creative endeavor. 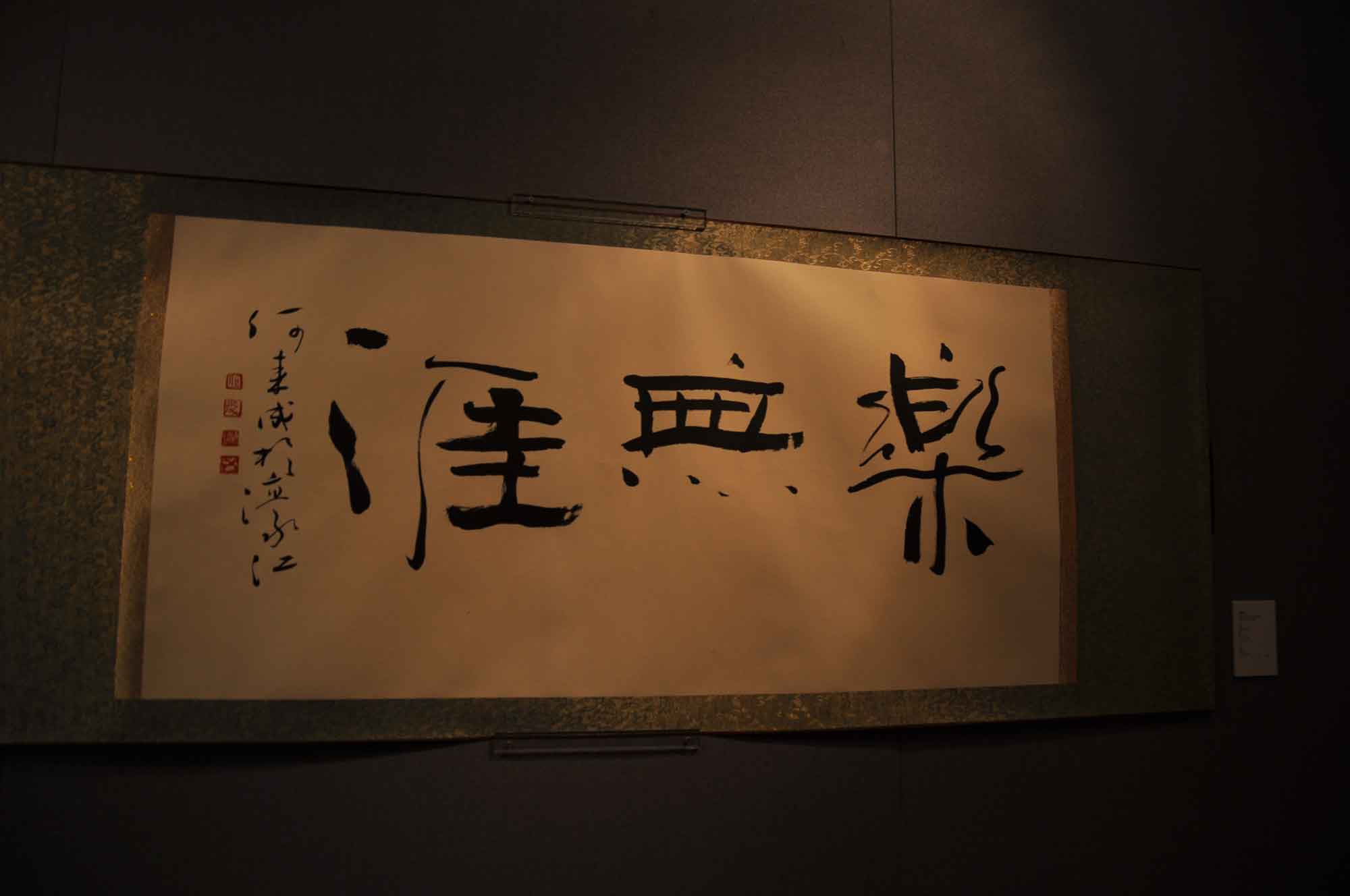 I was happy enough to sign the guestbook though, giving everyone a chance to see how a Canadian butchers the relatively simple characters “马帅”. 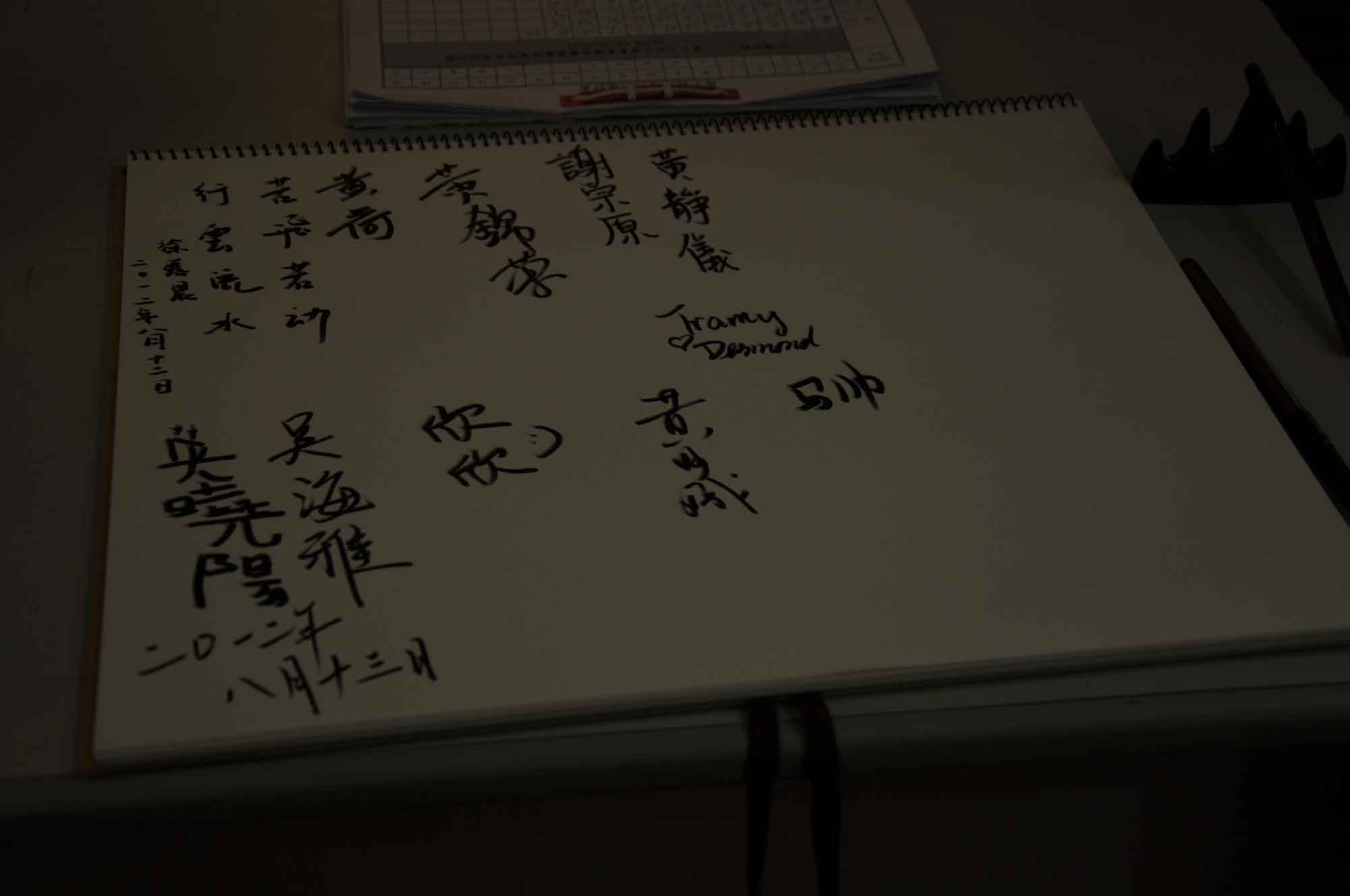 That’s my Chinese name, “Ma Shuai”, or handsome horse, although I don’t know how many people would agree.

After our time in the garden, Mu Yi wanted to see the adjoining Tea and Culture House next, accessible via an entrance in the park. 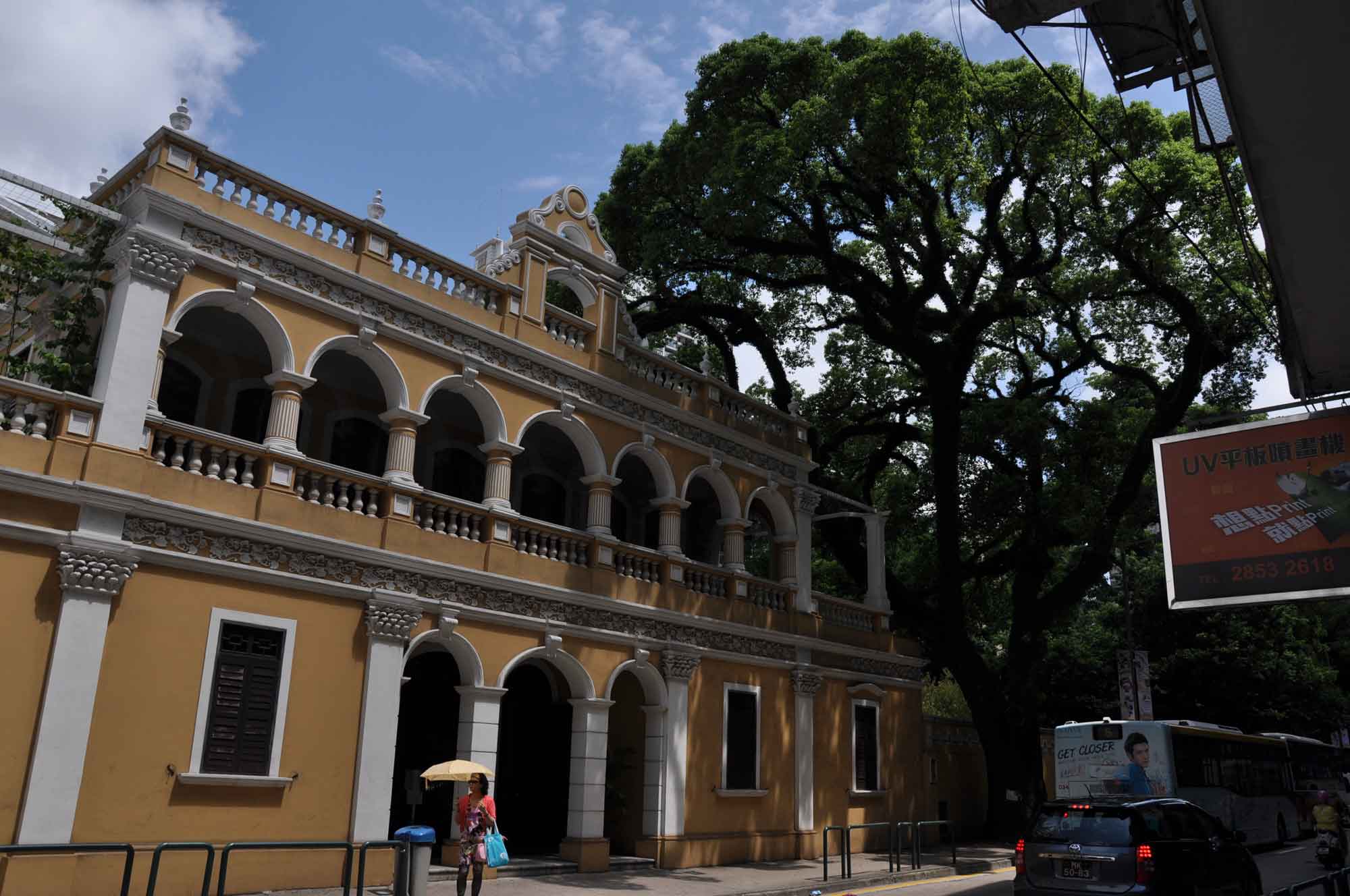 Composed of two stories in all, almost all of the displays are on the ground floor.  Most of the things shown are tea utensils; in particular, decoratively done up cups, plates, and kettles. 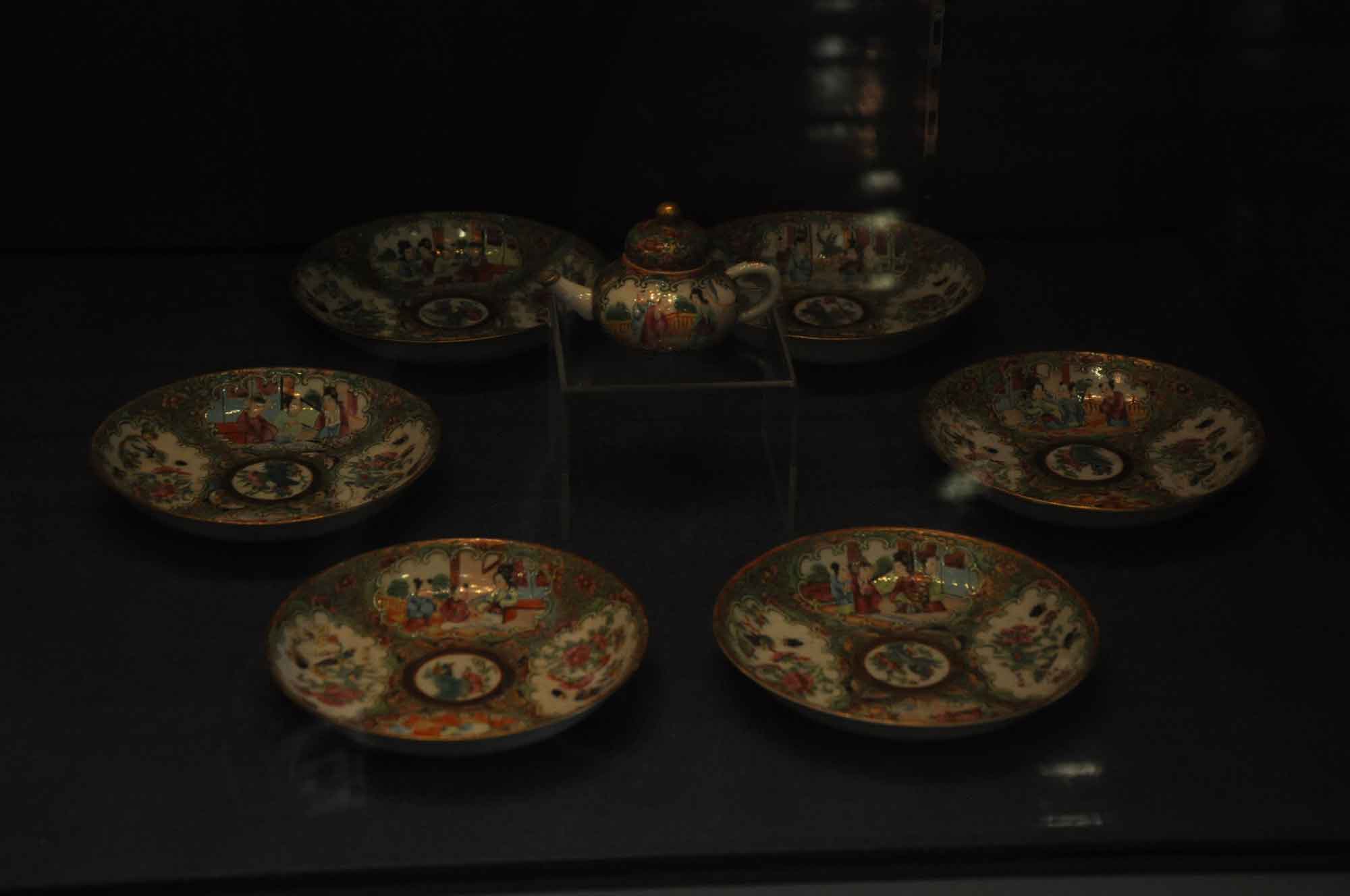 There’s also a brief history lesson on Macau teahouses, most of which are no longer open for business. 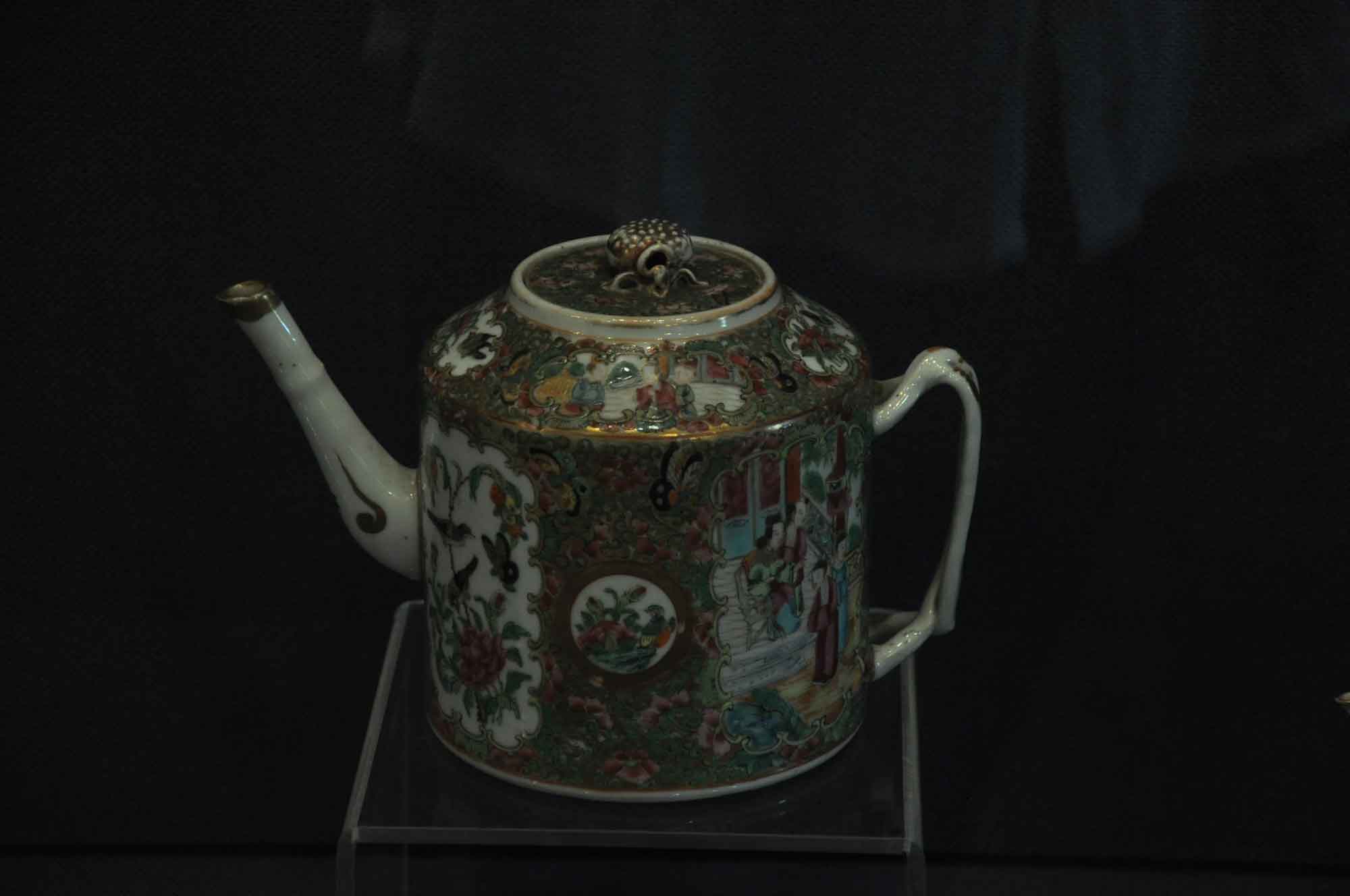 A little disappointingly, there’s not much information about tea itself, the different kinds popular in Macau, nor is there anywhere to taste or buy it. 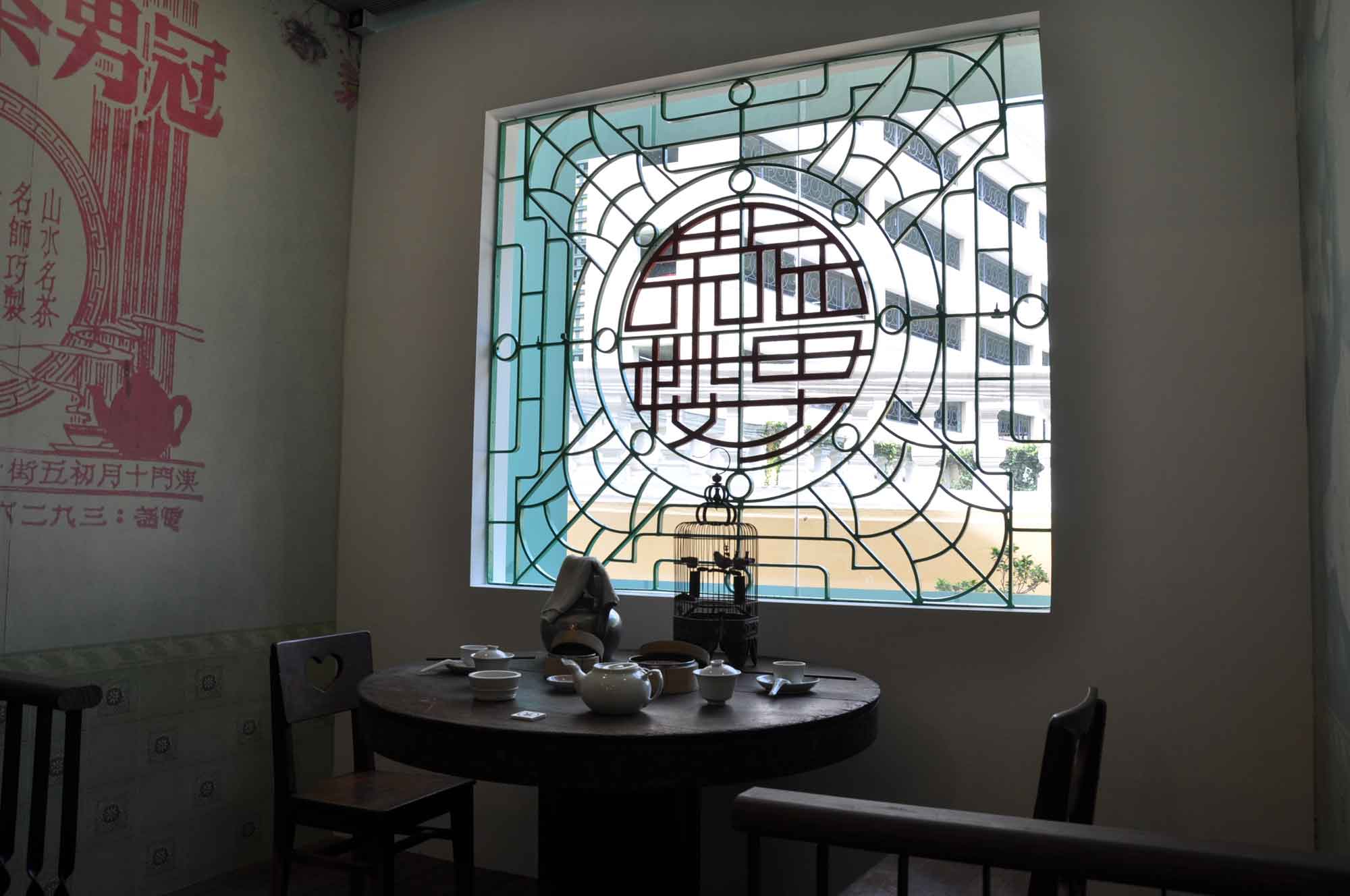 That notwithstanding, the Tea Culture House set us up perfectly for our next stop of the day, an early lunch at Long Wa, the only remaining traditional teahouse left in the city. 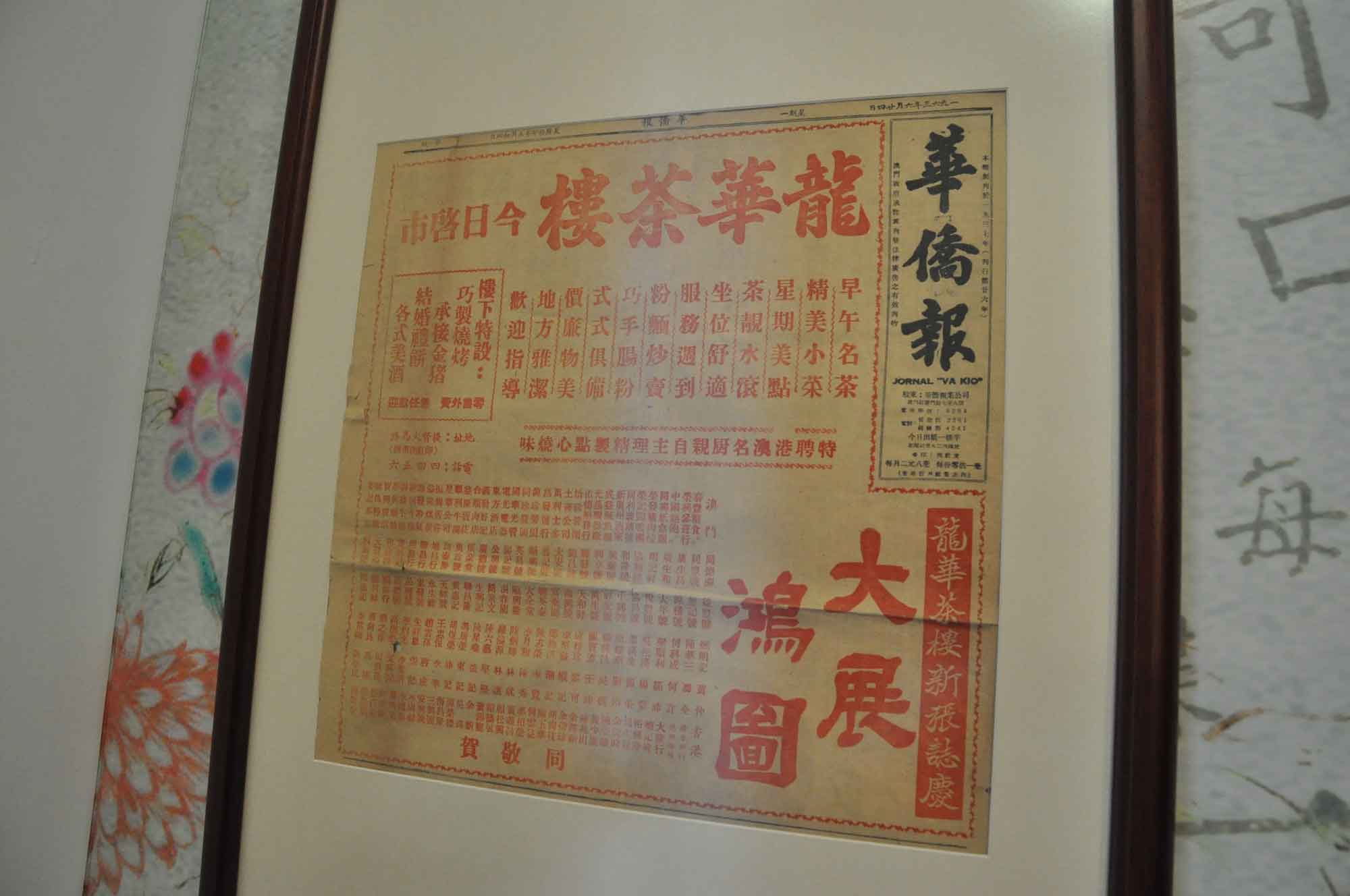