Serving the best in Spanish cuisine, the first thing to note about La Paloma is that it has a dress code that precludes patrons (but probably just men!) from wearing shorts.  I was turned away at the door for that very reason and had to change.  Funny enough, when the staff realized I was a hotel guest, they changed their tune and were a little apologetic about the whole matter.  Perhaps people staying at the Sao Tiago get more rope.

Not too many restaurants in Macau have dress codes and it’s kind of surprising that La Paloma enforces one, since the restaurant is not what I’d call posh at all. 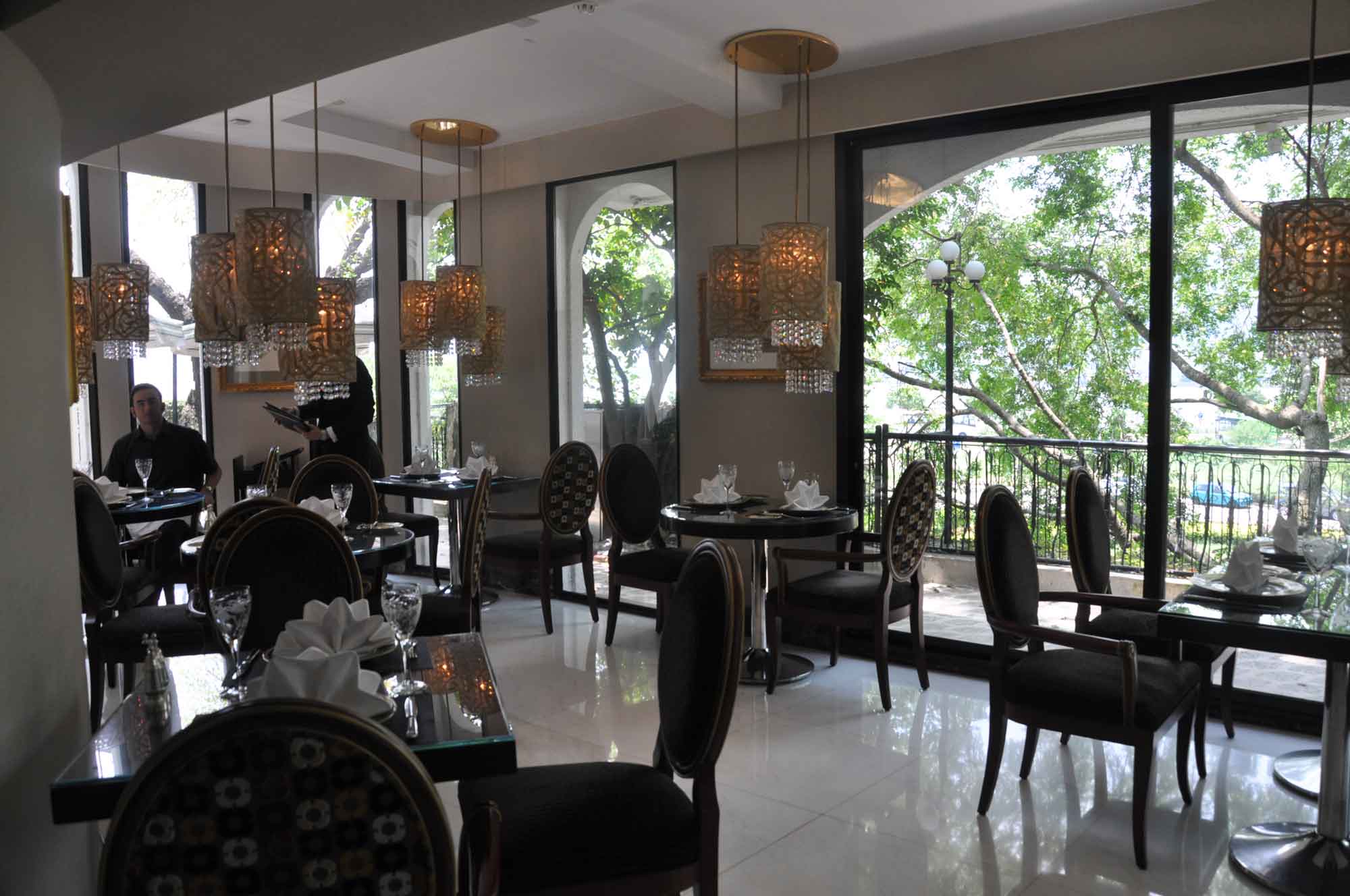 The decor is more low key than lavish, relying a lot on the natural light that pours in through the large glass windows.  Most shockingly, the restaurant plays pop music in the background, a notion that flies in the face of being elite and exclusive, which is what places with dress codes want to be. 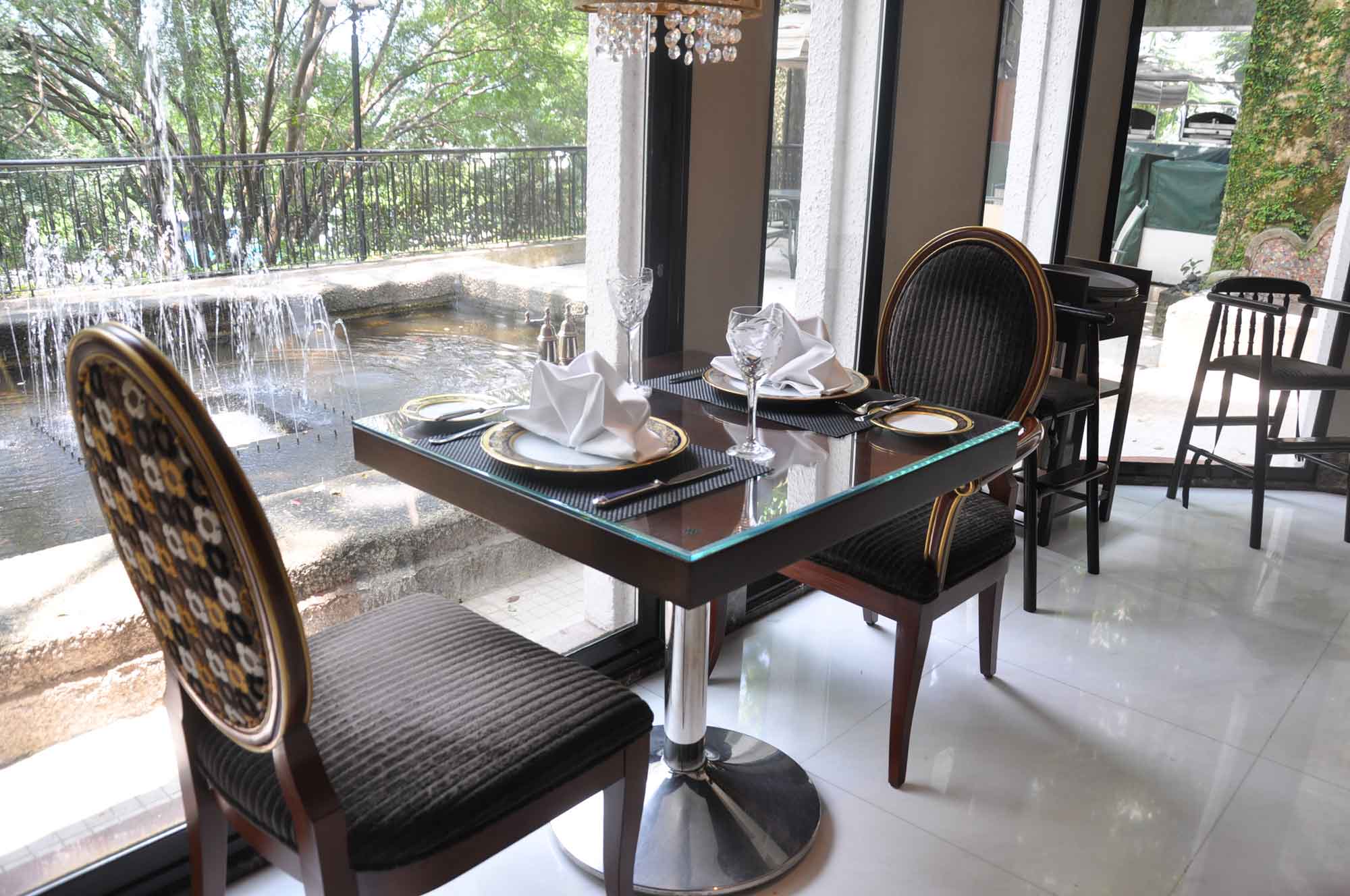 Bottom line La Paloma?  Stop taking yourself so seriously when you’re blaring Bieber and the Backstreet Boys back to back.

The good news is that apart from the dress code and sorry ass music, I don’t have a single bad word to say about the restaurant.

The lunch Mu Yi and I had there rates as one of our all time best dining experiences in Macau.

Just like the famous line about pornography that goes, ”I know it when I see it”, the same can be said for fine dining, except you know it when you taste it.  And we certainly tasted a lot of it at La Paloma.  From sight to smell to flavor to the ingredients used, it was just food of a higher order, a supreme indulgence of the most splendid kind, especially when we paired it with such good wine.

The Caldo Verde soup was particularly memorable, costing only $50, it was a meal unto itself, since the bowl was made of bread and could be eaten afterwards. 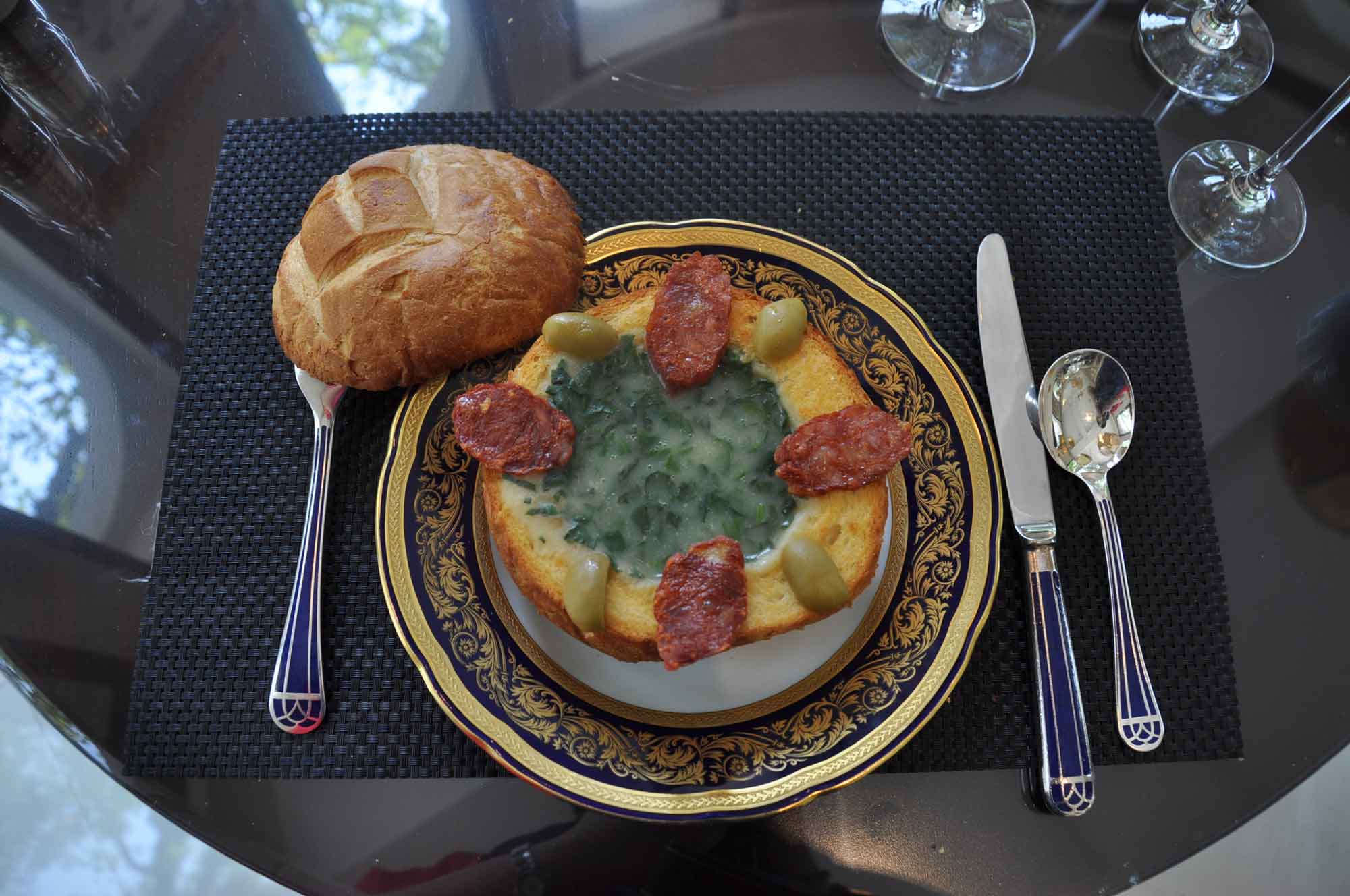 Mu Yi absolutely raved about her lobster rice, while my seafood soup and veal shank both hit the mark.

After our horrible experience at Guincho A Galera, we felt completely taken care of at La Paloma, and nothing let us down.

It was quite expensive however, with prices the same as premium 5 star hotel dining venues.  For a three course meal, you’ll be looking at around $800 a person, while wine and other beverages have undergone their traditional 100% mark up. 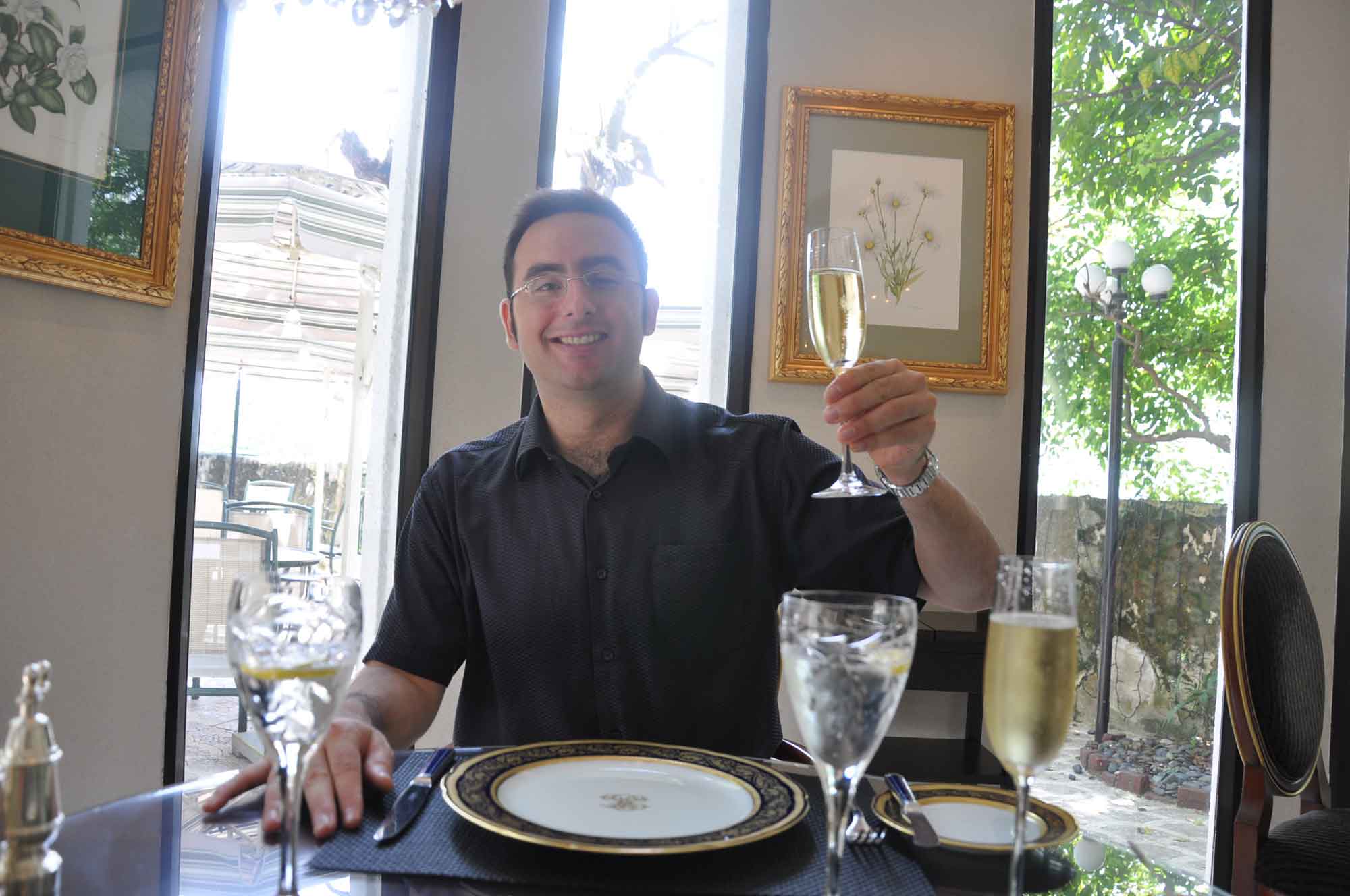 Still though, Spanish joints are rare in Macau and this one is very much worth going to, if you can afford it.  Even though our bill ran $2240 I wouldn’t hesitate in going again. 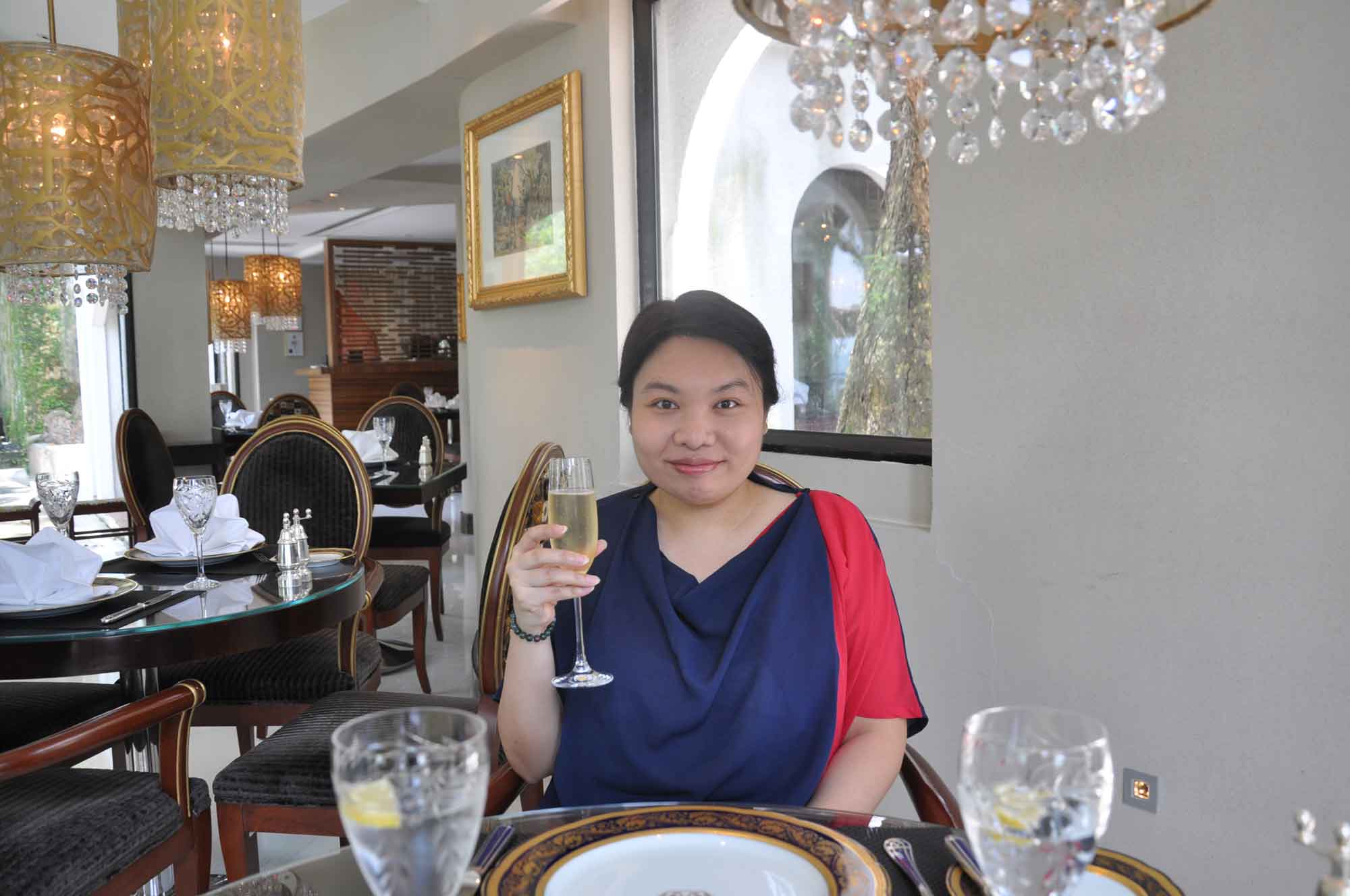 We only had one thing on tap in the afternoon and that was to finally visit the Minority Sculptures Complex at Taipa Grande Park.  Back in March we tried to go there but got lost, ending up on Taipa Pequena instead, the Taipa’s other mountain.  With four months to get our facts straight, we had no problems the second time around and found the right place.  The easiest way to get to the Sculpture Park is to actually go to the airport first.  From there follow the signs to the adjacent Golden Crown China Hotel.  Proceed to one of the higher floors (the one with the lobby I think) then walk outside.  The Sculpture Park will be across the road up one flight of stairs.

The first thing you’ll come to is a small exhibition center displaying the clothes, crafts and musical instruments of some of the minorities.  For those who don’t know, China is made up of 56 minorities in all, with Han being the most dominant.  The Chinese are very proud of this ethnic melting pot, how they’ve been able to accommodate so many diverse people and bring them together into one happy, flourishing and peaceful society. 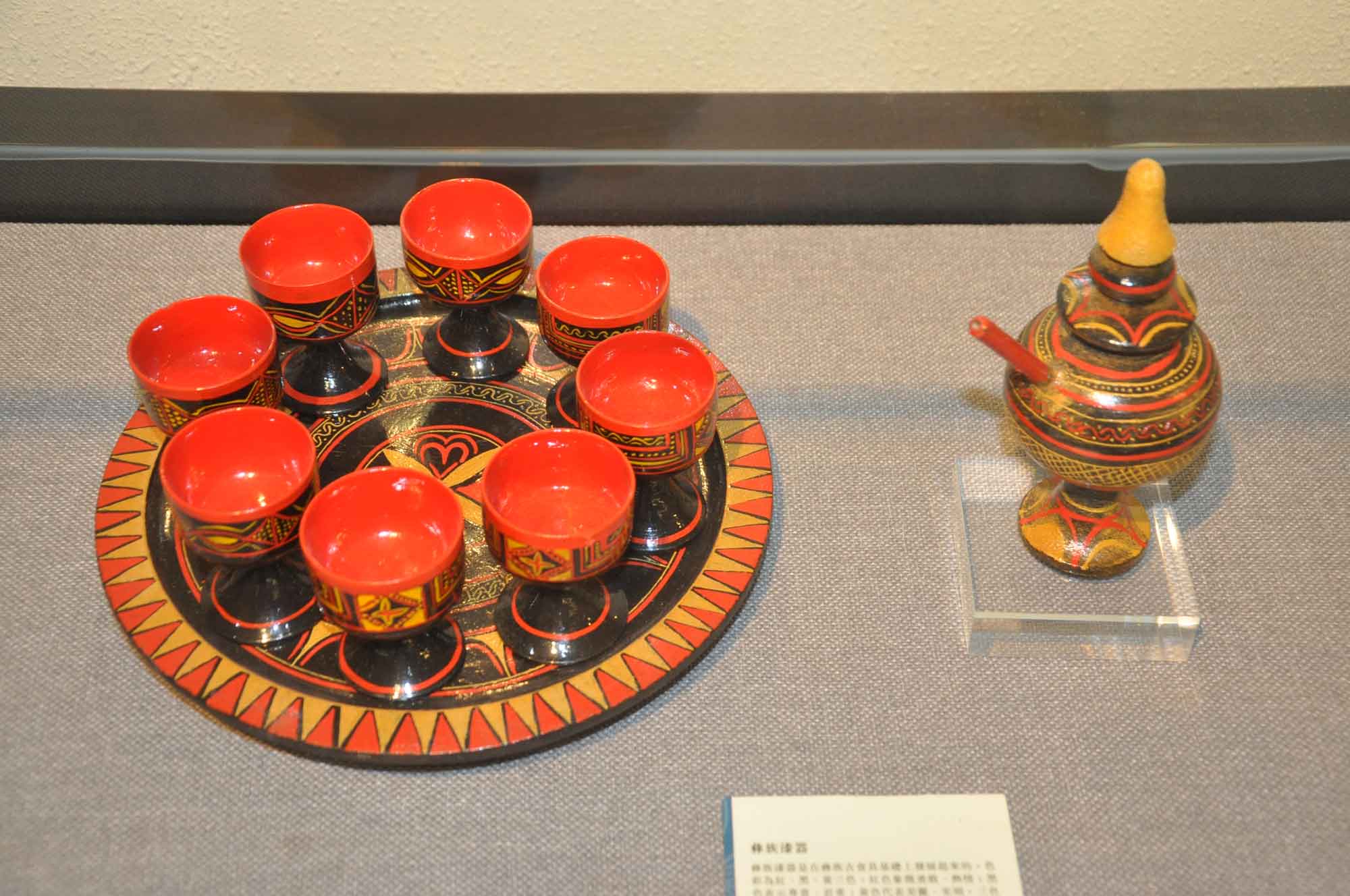 The truth however is that most of these minorities lost their unique culture years ago, forced to abandon their language, beliefs, and ways of life to fit into modern China.  Only in some pockets of the country, particularly in the West and Southwest, and in poorer undeveloped regions, do these minorities still proudly press on, decked out in their traditional dress and eating their traditional cuisine, the same way their parents and grandparents had done. 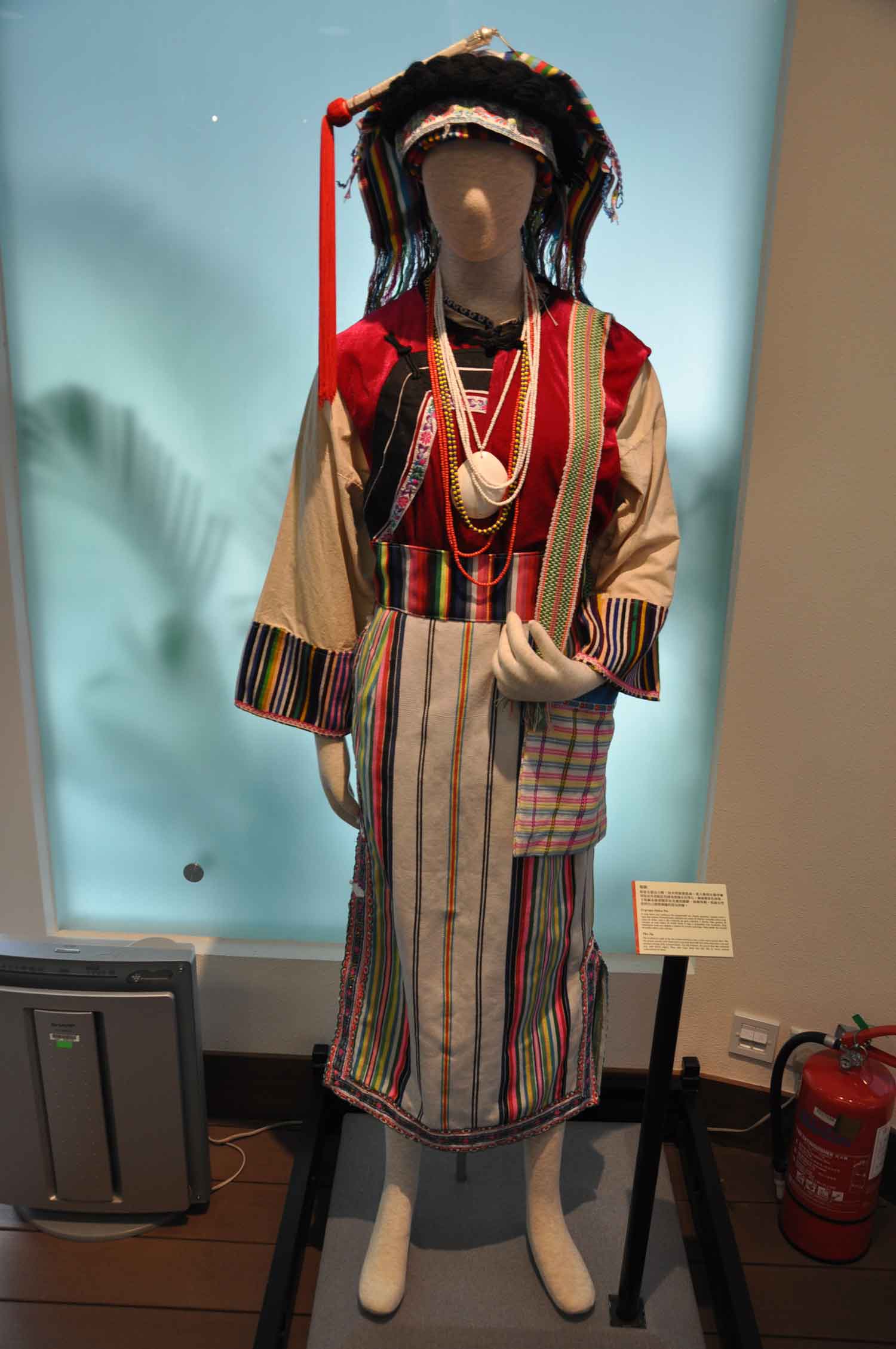 The exhibition hall isn’t large, but is worth having a look at, just to see the art, clothes and other items on display.

After the exhibition hall, the main road outside winds into Taipa Grande Park which is where the sculptures begin.  We tracked all 56 of them down and will share the ones we liked the most, along with some information about the minority.  I must admit that most of the statues were a little disappointing.  90% percent of them didn’t stand out and not much could be gleaned from them other than the most obvious – this minority has this musical instrument or likes to dance or wears these kinds of clothes.  There wasn’t enough art in the sculptures themselves, if that makes any sense.  If they had been more dramatic and/or expressive, they would have been a lot better.  Anyway, here are the 6 we liked best: 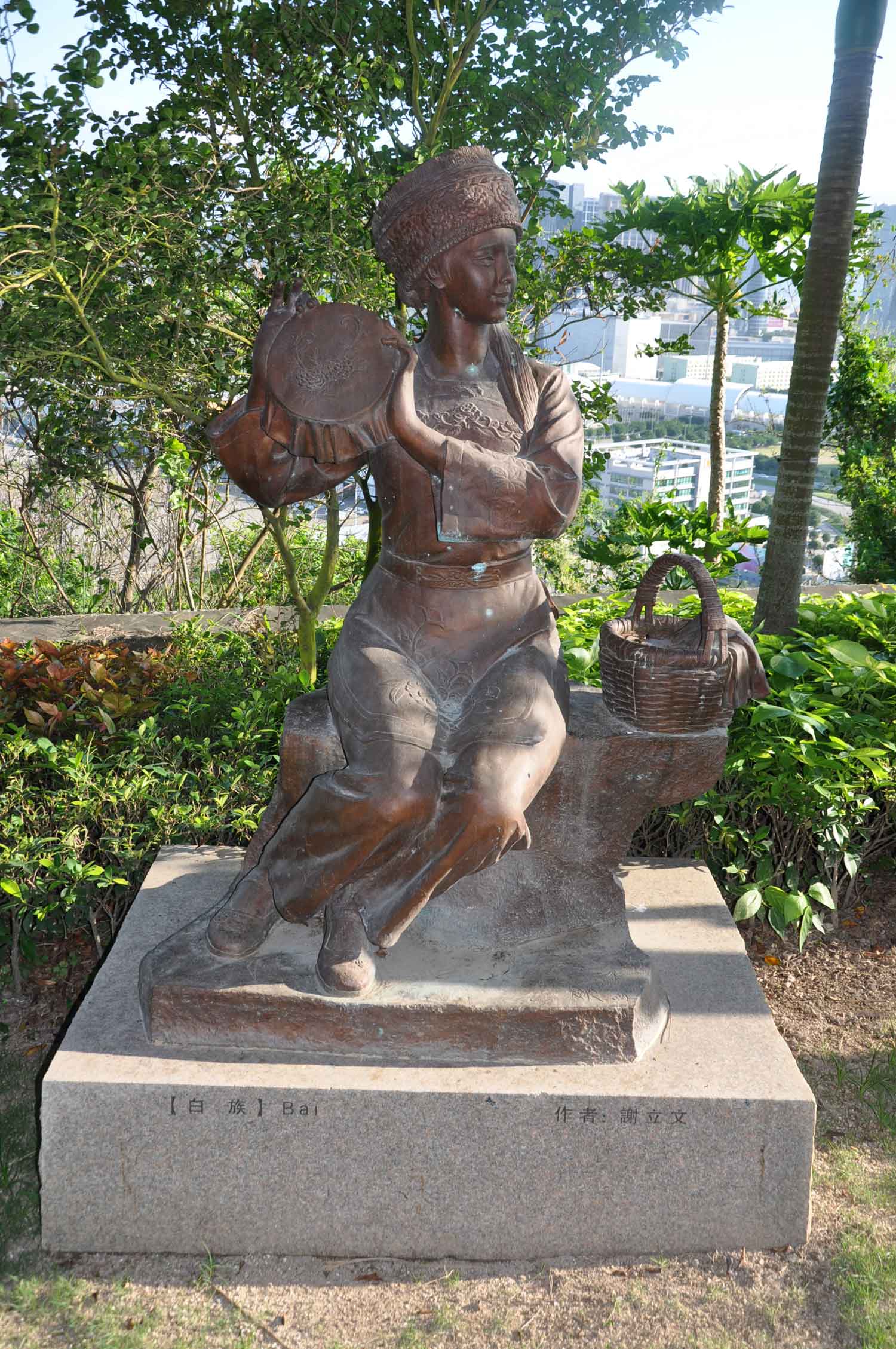 Bai: The Bai nationality are the country’s 14th largest minority, with a population of 1.9 million people.  They revere the colour white, and thus are named the “White” people.  There’s your Chinese lesson for the day, Bai means white and is pronounced “by”.  Most Bai people practice Buddhism and live in Yunnan province. 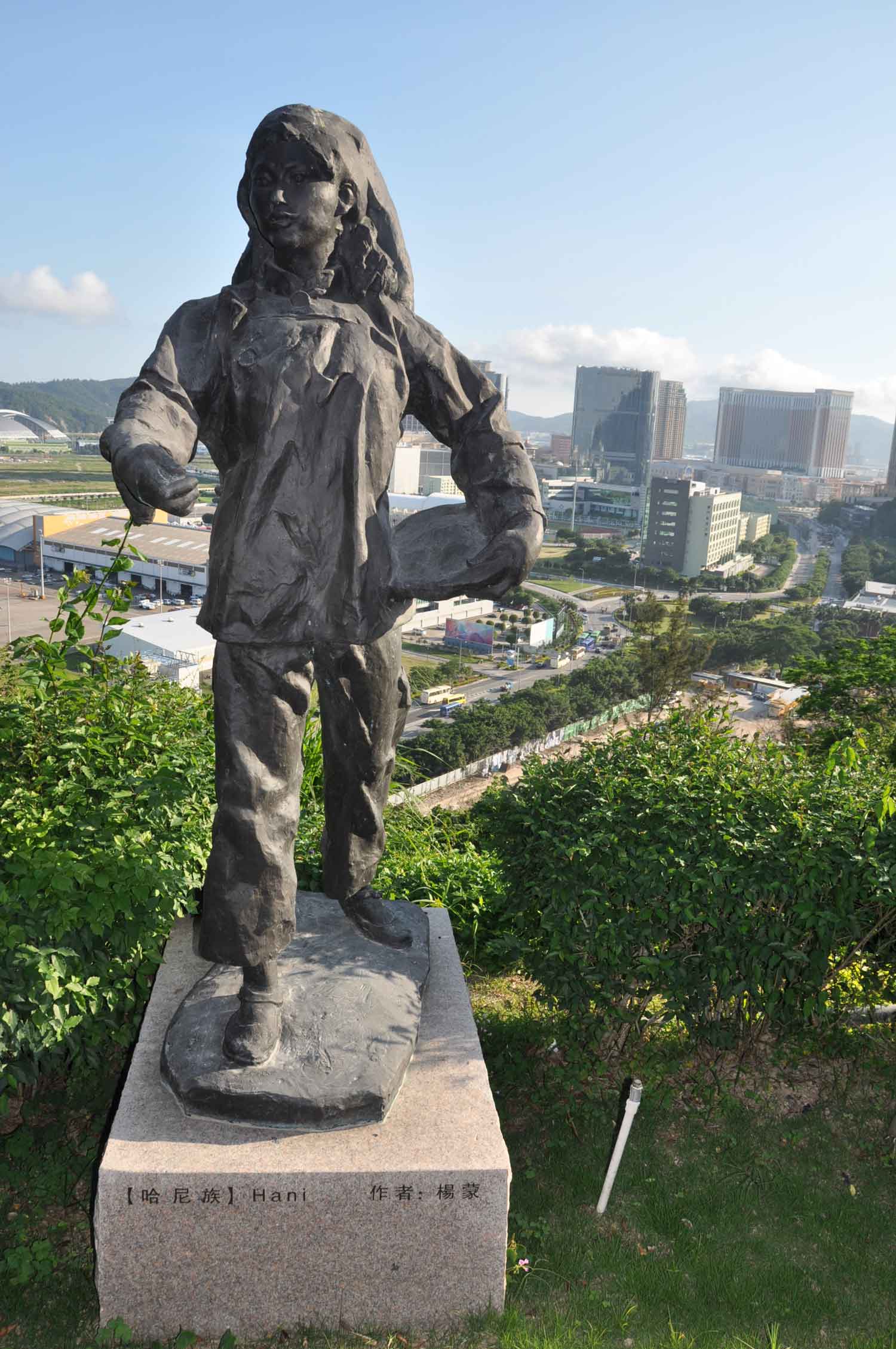 Hani: The Hanis are the 16th largest minority in China, with a population of 1.6 million. Over 80% are found in Yuanyang county Yunnan province, which is famous for its rice paddy terraces.  I went to Yunnan once to check them out, but got there too late.  The time to go is when they are the most picturesque, from January to March. 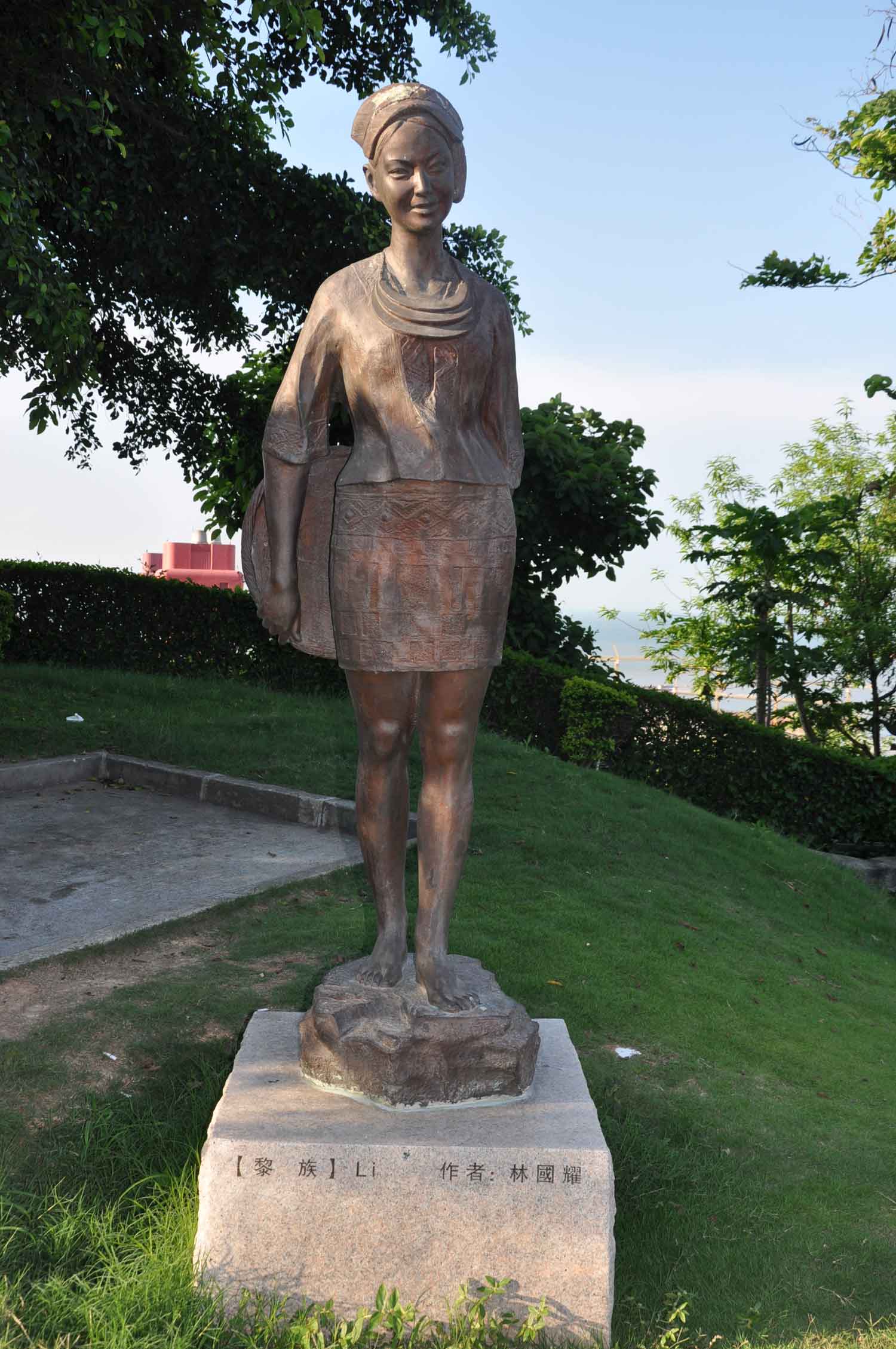 Li: The Li come from tropical Hainan island, and number 1.4 million.  They are China’s 17th largest minority.  Southern girls are renown for being beautiful, but short, and this one was my favourite statue.  Its amazing how sweet and warm she looks considering she’s made of cold stone.  In that way, she’s a lot like my ex-girlfriend. 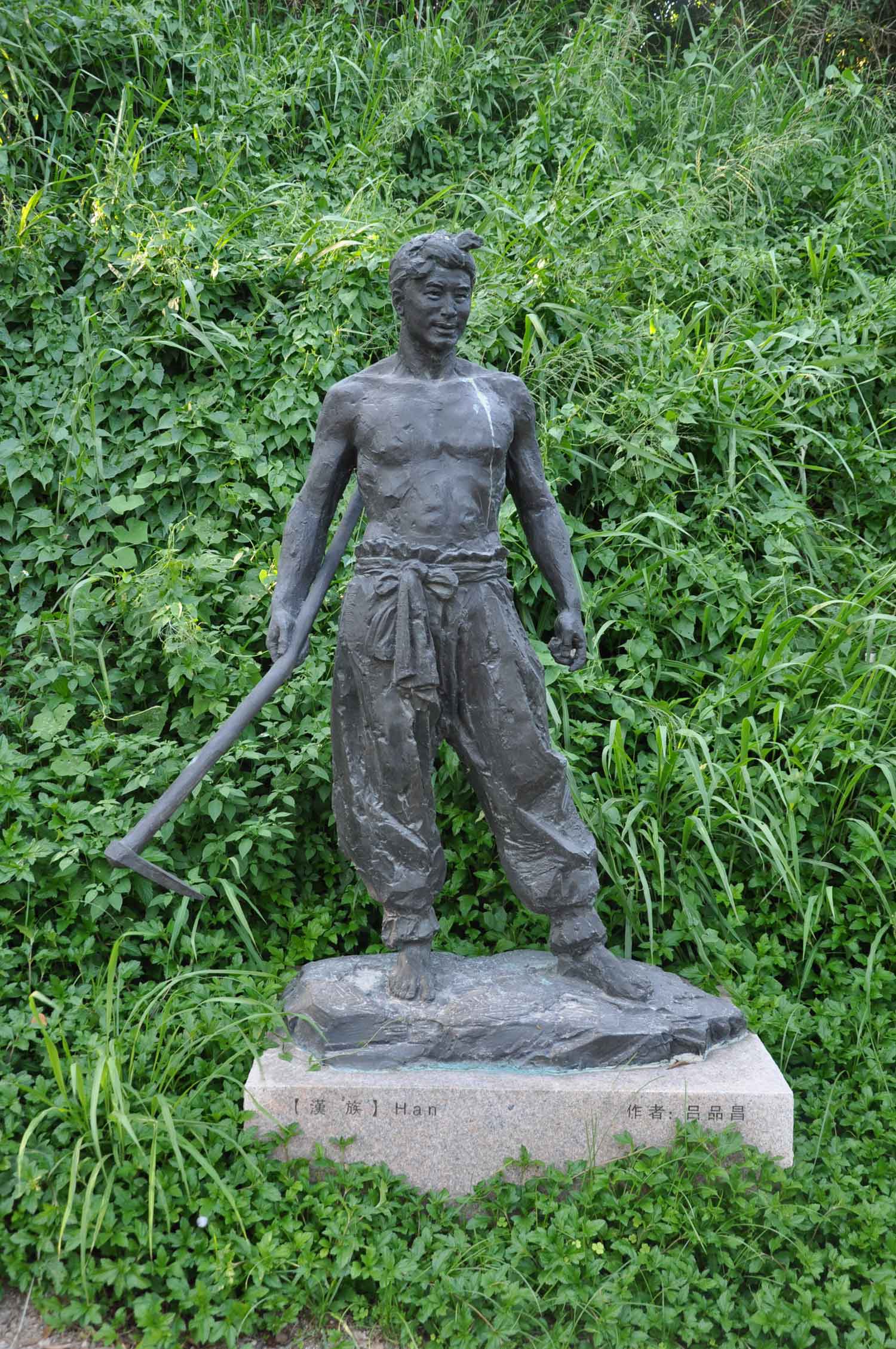 Han: Here are your rulers of China.  Funny that the statue should depict a farmer when that is the last thing any Chinese person wants to be now.  Anything related to the countryside is equated with low social standing and poverty.  A fat businessman flashing a thick wad of bills would have been much more appropriate. 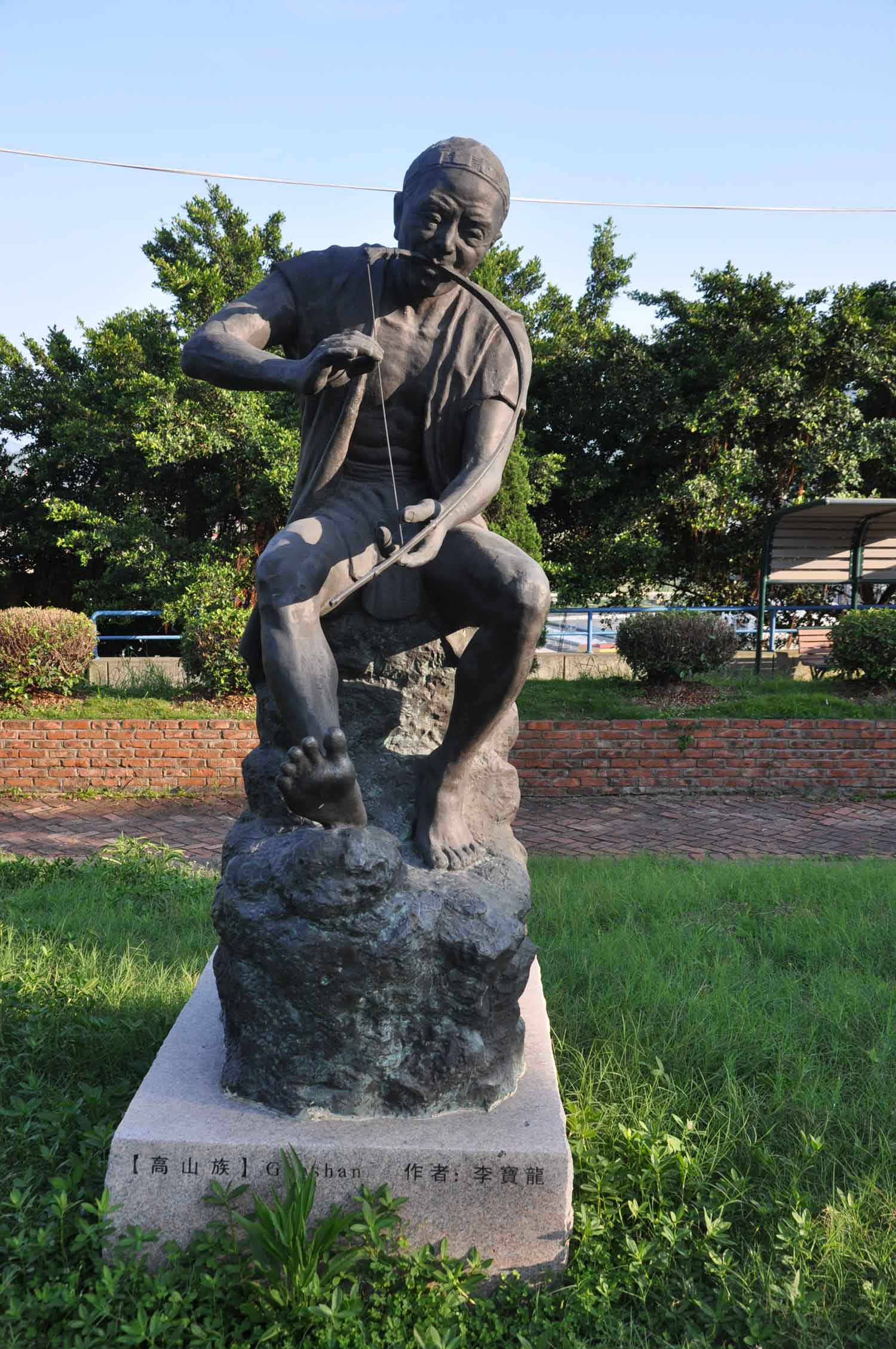 Gaoshan: The Gaoshan are the indigenous peoples of Taiwan, of which only 4000 are living in China.  Like aborigines from most countries, they face economic and social hardships, including high unemployment and inferior education. 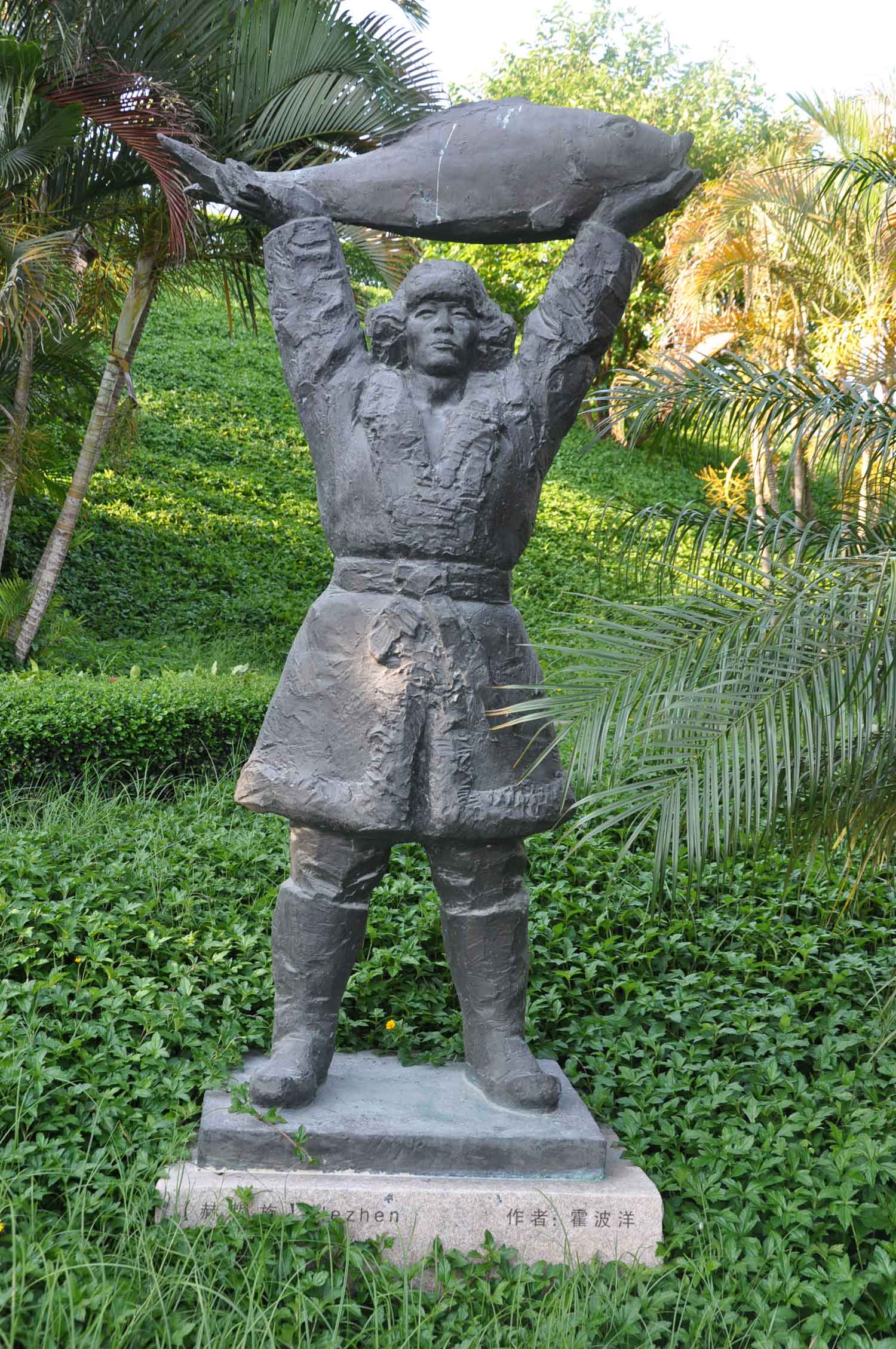 Hezhen: Hezhens are descendants of the Juchens, a bunch of ass kicking hard hitting mofos from Northeastern China who toppled the Song Dynasty in 1127.  They then set up their own Jin Dynasty which controlled most of the North until the Mongols took everything over in 1234.  400 years later the Jurchens stormed back with a new name, the Manchus, and they didn’t mess around this time.  They conquered all of China, and set up the last of the Imperial dynasties, the Qing, which would rule until 1911.

The Hezhen minority, known as Nanai in English, were almost wiped out by the Japanese when they controlled the Northeast in the 1930’s and 40’s.  By 1949 there were only 300 of them left.  In 2005 numbers were back up to over 4,500, with most of them living in Heilongjiang province.  Here’s hoping for the continued revival of the Nanai people, and that they continue hoisting fish like the champions they are!

As for the park itself, there are some great views of the Cotai Strip and a couple of exercise areas and playgrounds.  Largely unknown to tourists and let’s face it, not easy to get to either, the Sculpture Park is underutilized and rarely visited.  During our hour there, we only saw two or three other people.  I suggest you leave it to the locals, as there are much better places in Macau to spend your time.

(Update: The Sculpture Park has since moved location to the Comendador Ho Yin Gardens on the old Peninsula, beside the Rio Hotel.)

Instead of going back to the airport the way we came, we chose to walk down the trails that lead to Taipa Houses Museum and Our Lady of Carmel Church.