Our next stop was Lin Fung Temple (aka the Lotus Temple), about a five minute walk away. 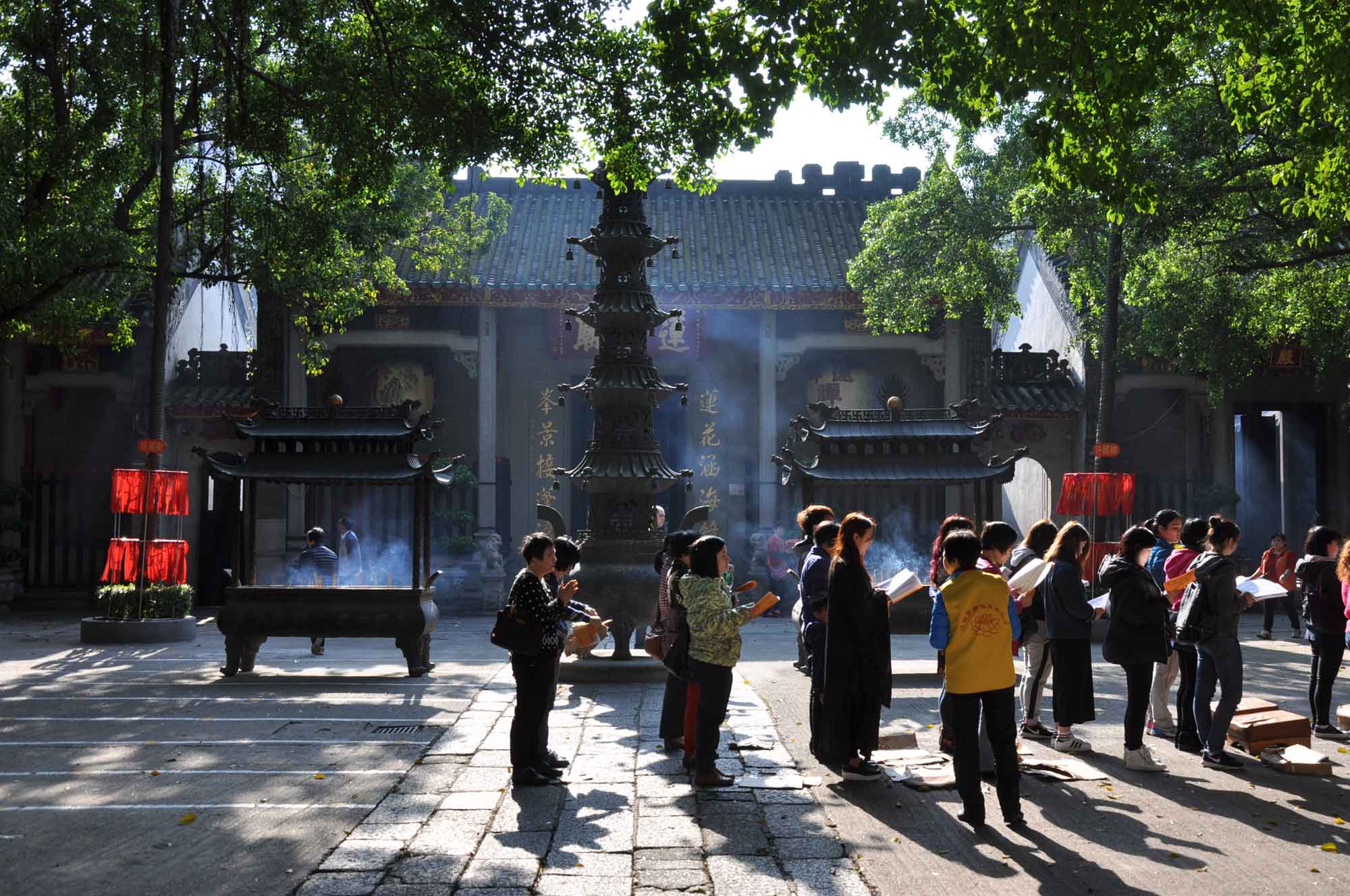 One of the Three Ancient Temples of Macau, nobody knows exactly when it was built, with some sources saying 1592 and others 1723.  Regardless, everyone agrees that it’s been a historically important destination for mainland Chinese to visit, so I was happy that Mu Yi was able to honour that tradition. 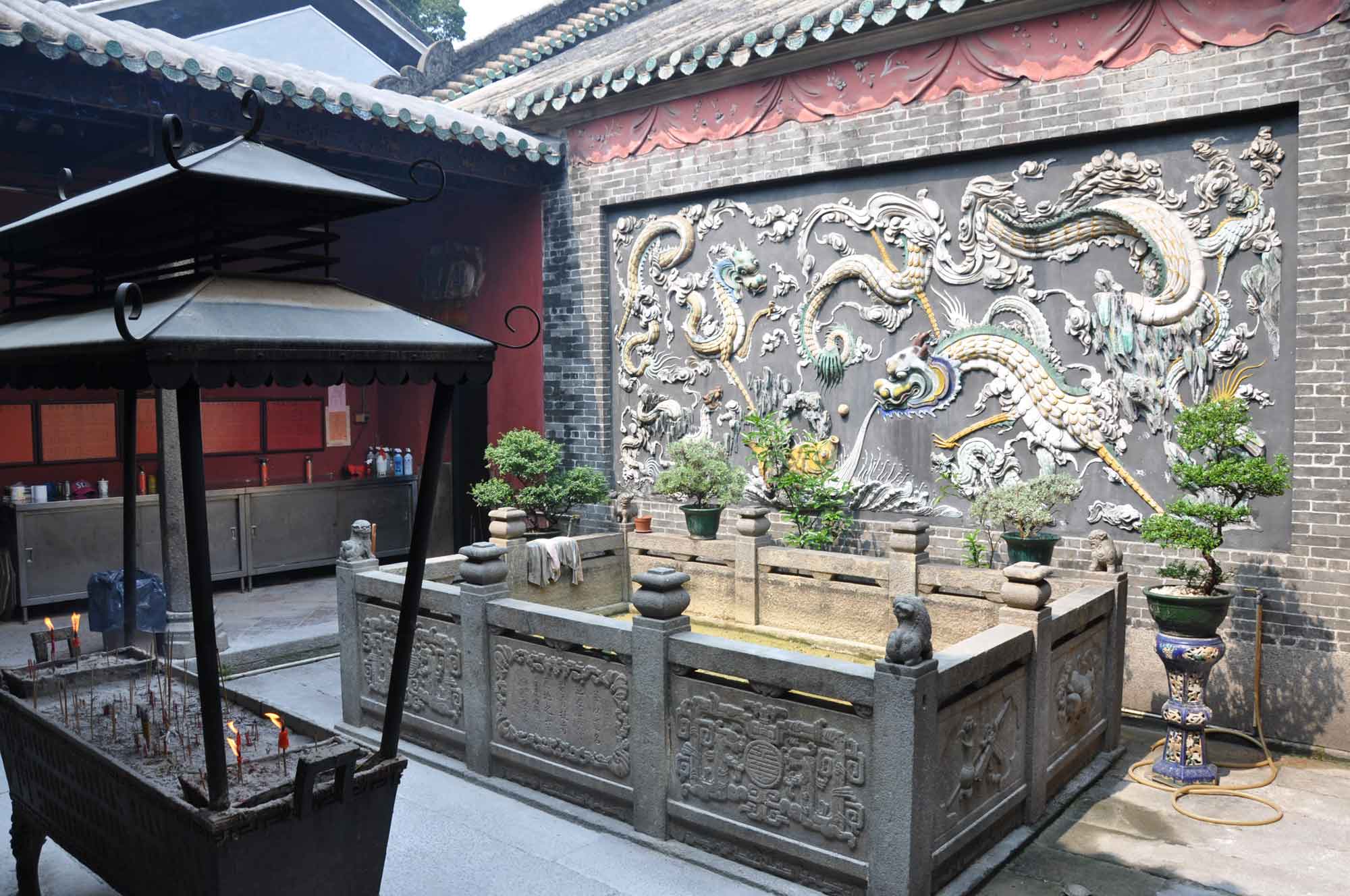 Unlike most temples where the main altar is usually the main bit of excellence, the best parts of Lin Fung are the two carved collages, one of a dragon, and the other, perhaps of a phoenix. 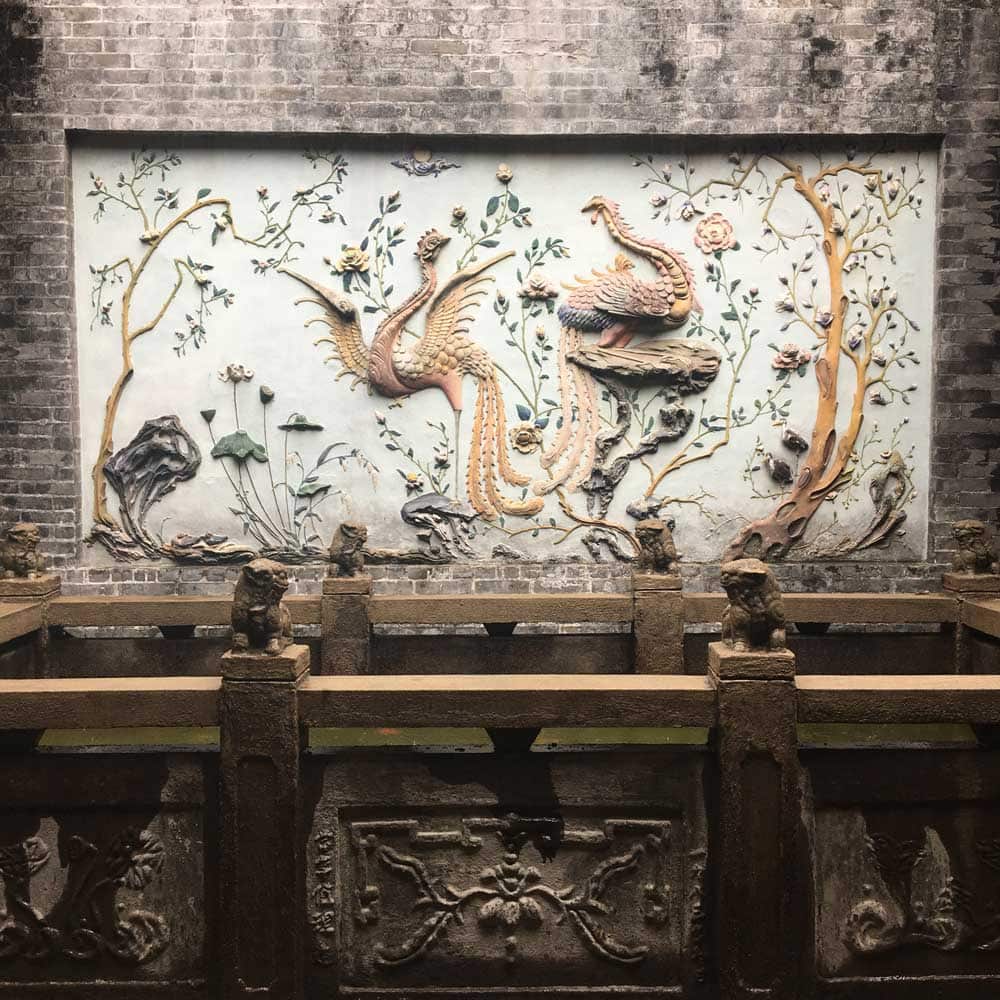 As we made our way through the series of side chambers and main halls, there seemed to be art or something to admire everywhere we looked, from the pretty rooftop ornamentation to the stone lions, the dragon heads to the dragon murals, the warm countenance of Kun Iam (the Goddess of Mercy) to the timeless gaze of Tin Hau (the Goddess of Seafarers.) 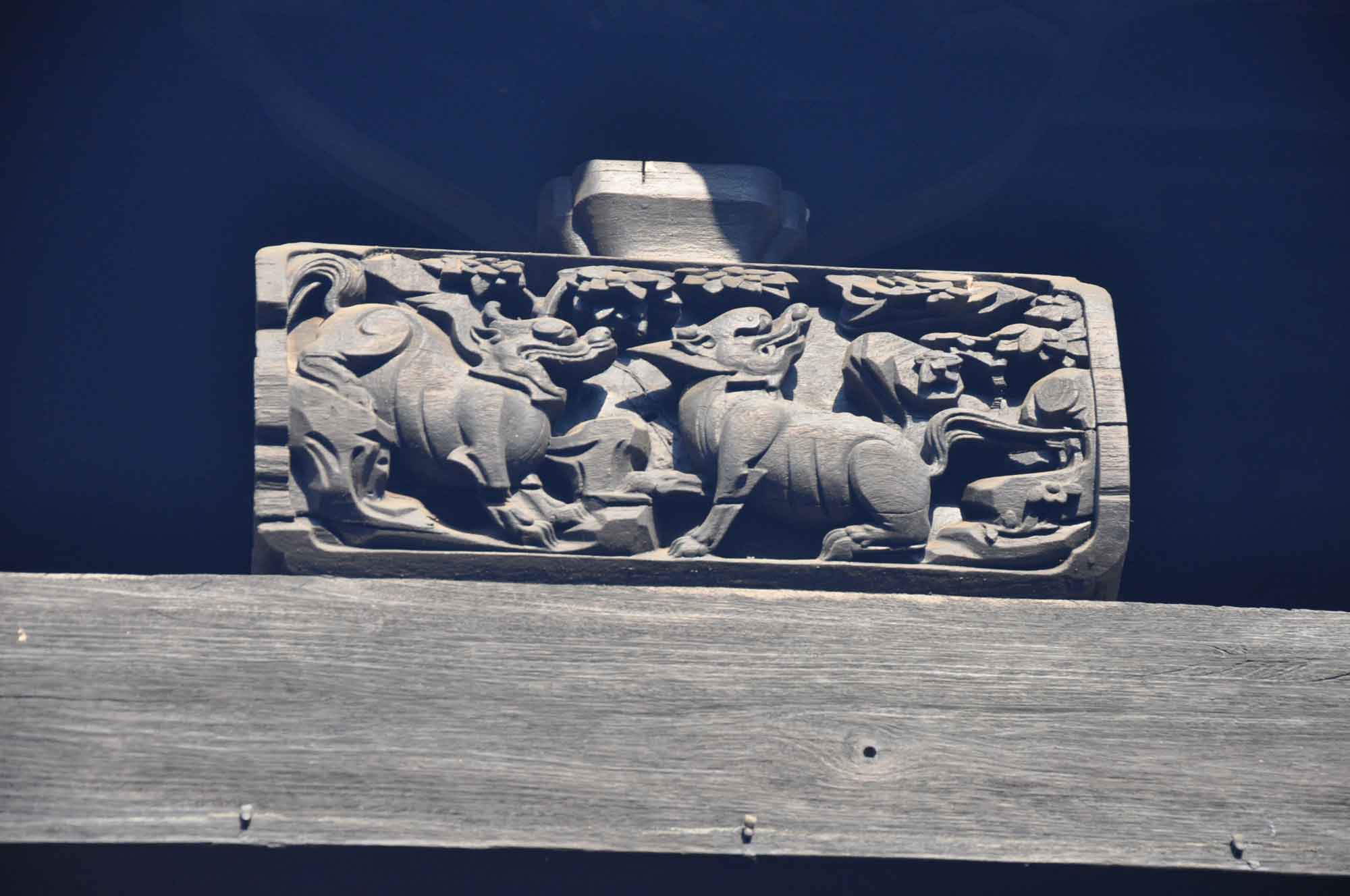 I don’t know how Mu Yi got this shot below, but yeah, I am very very jealous. 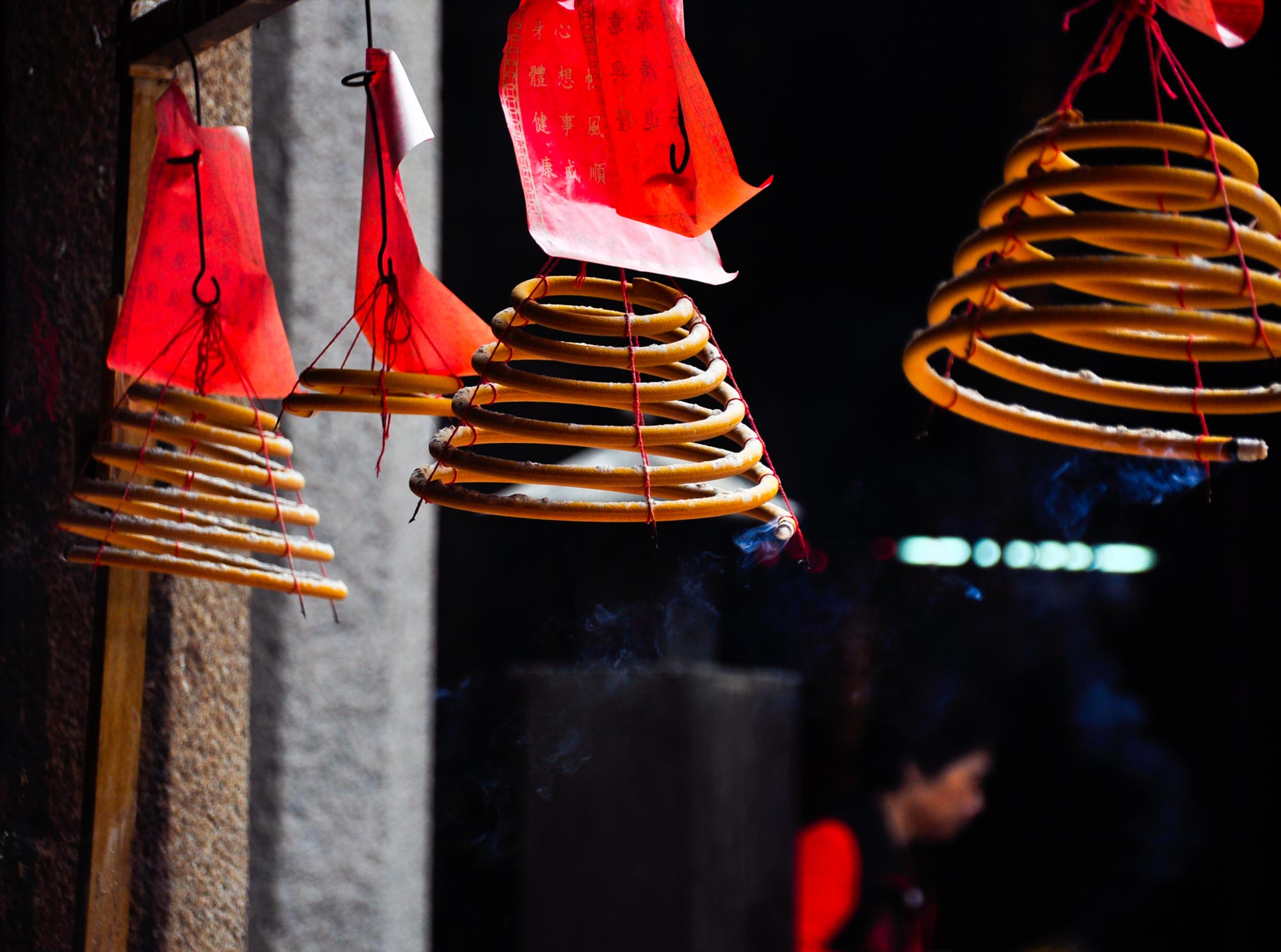 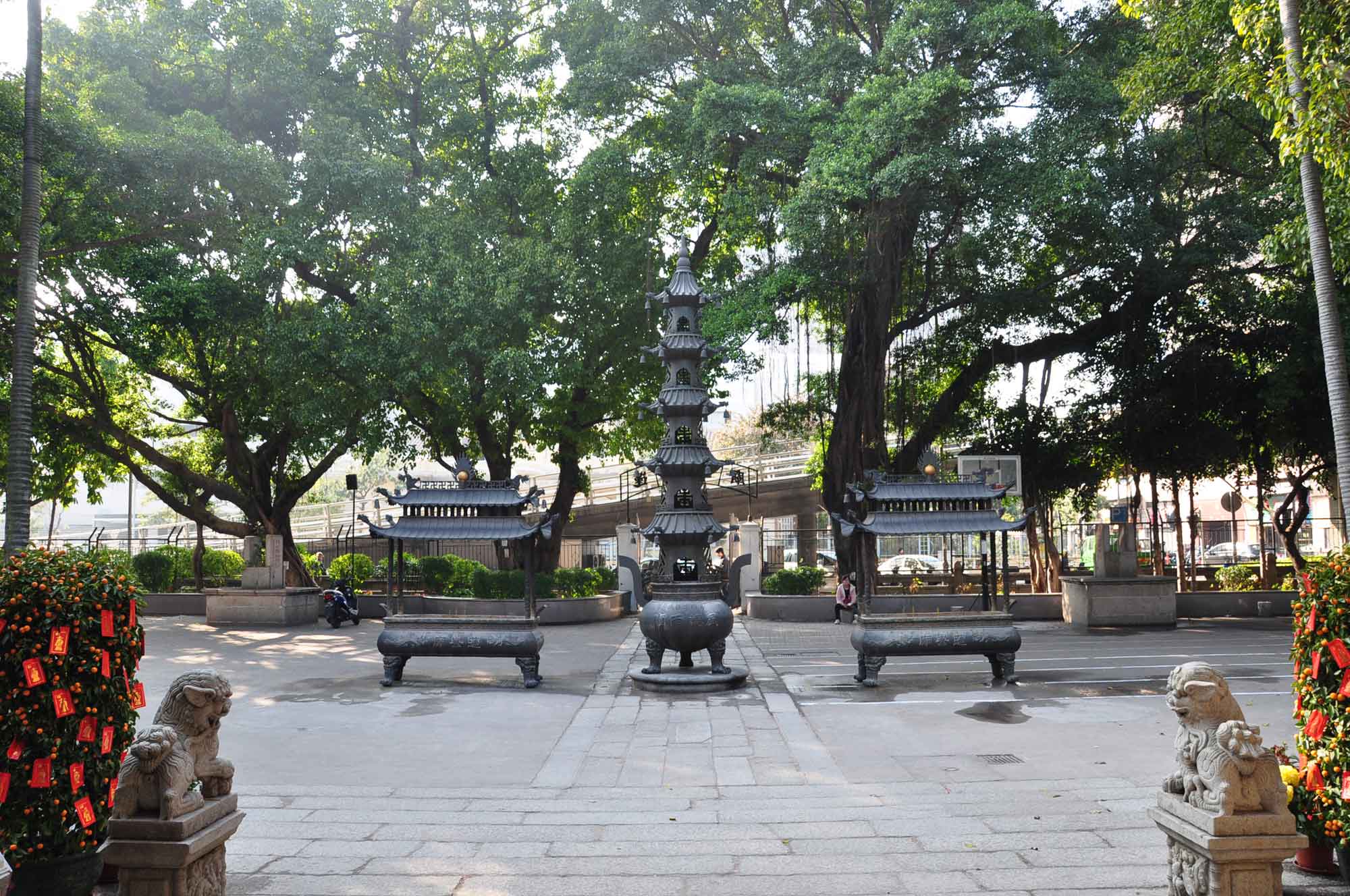 After the Lotus Temple, we hit the adjoining Lin Ze Xu Museum, built in honour of the man Qing Emperor Daoguang sent down to Canton in 1839 to suppress the opium trade.  The introduction of opium was probably the most reprehensible act committed against China by any foreign power in the 19th Century, and believe me, those one hundred years were full of atrocities. 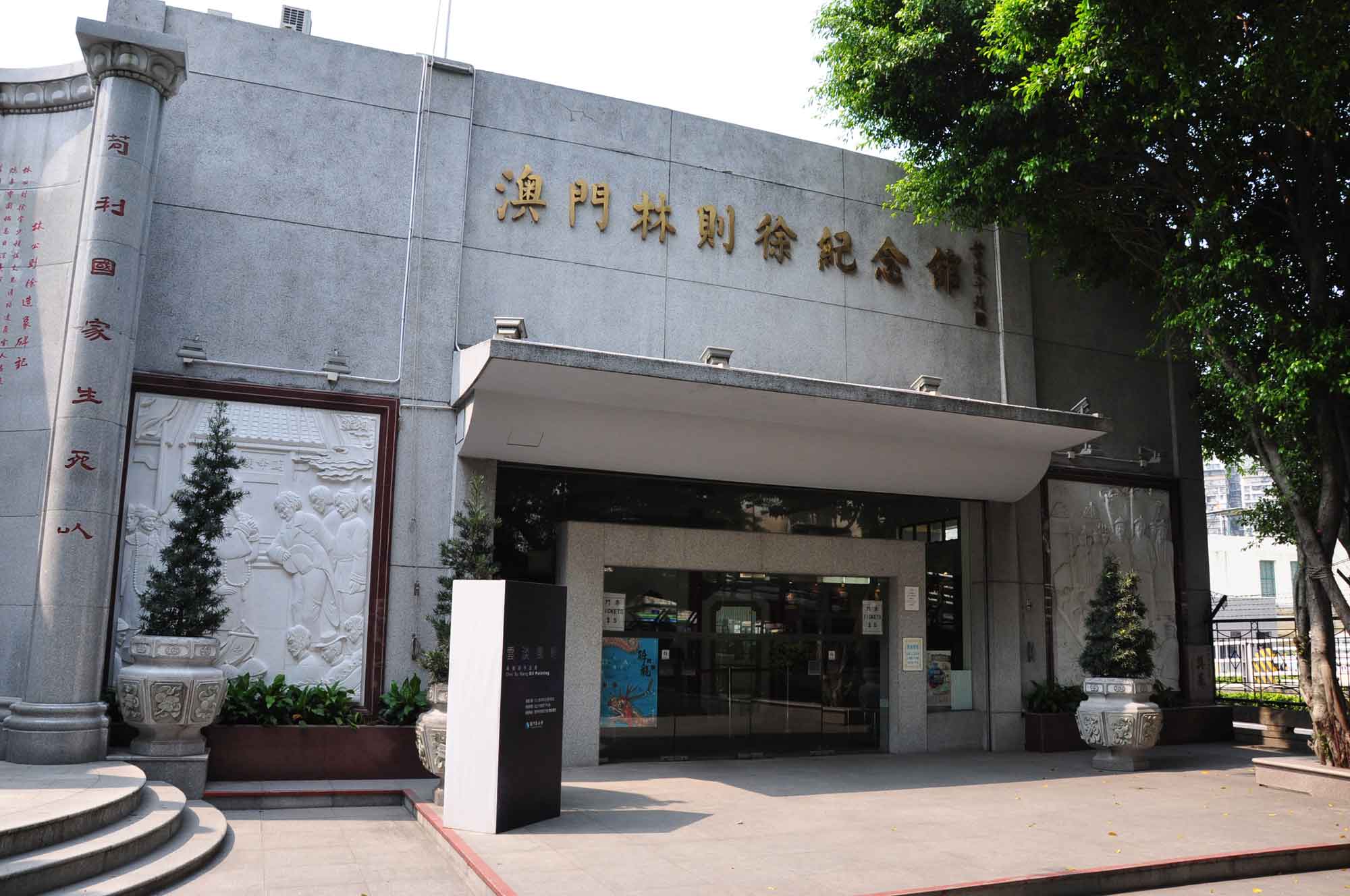 Let me provide a little background first.  After Emperor Qianlong in 1793 declared, “China is the center of the world and has everything we could ever need and that all Chinese products were to be bought with silver,” foreign silver reserves started to dwindle decades later.  The demand for Chinese products at that time, in particular, silk and tea, was just that high.  So as a way to keep all their silver from disappearing, the British sought a new currency of trade, and they found it in the way of opium.  They were so successful in their efforts to hook the country that by 1881, 30% of Chinese were regular users, up from 2% in 1841. 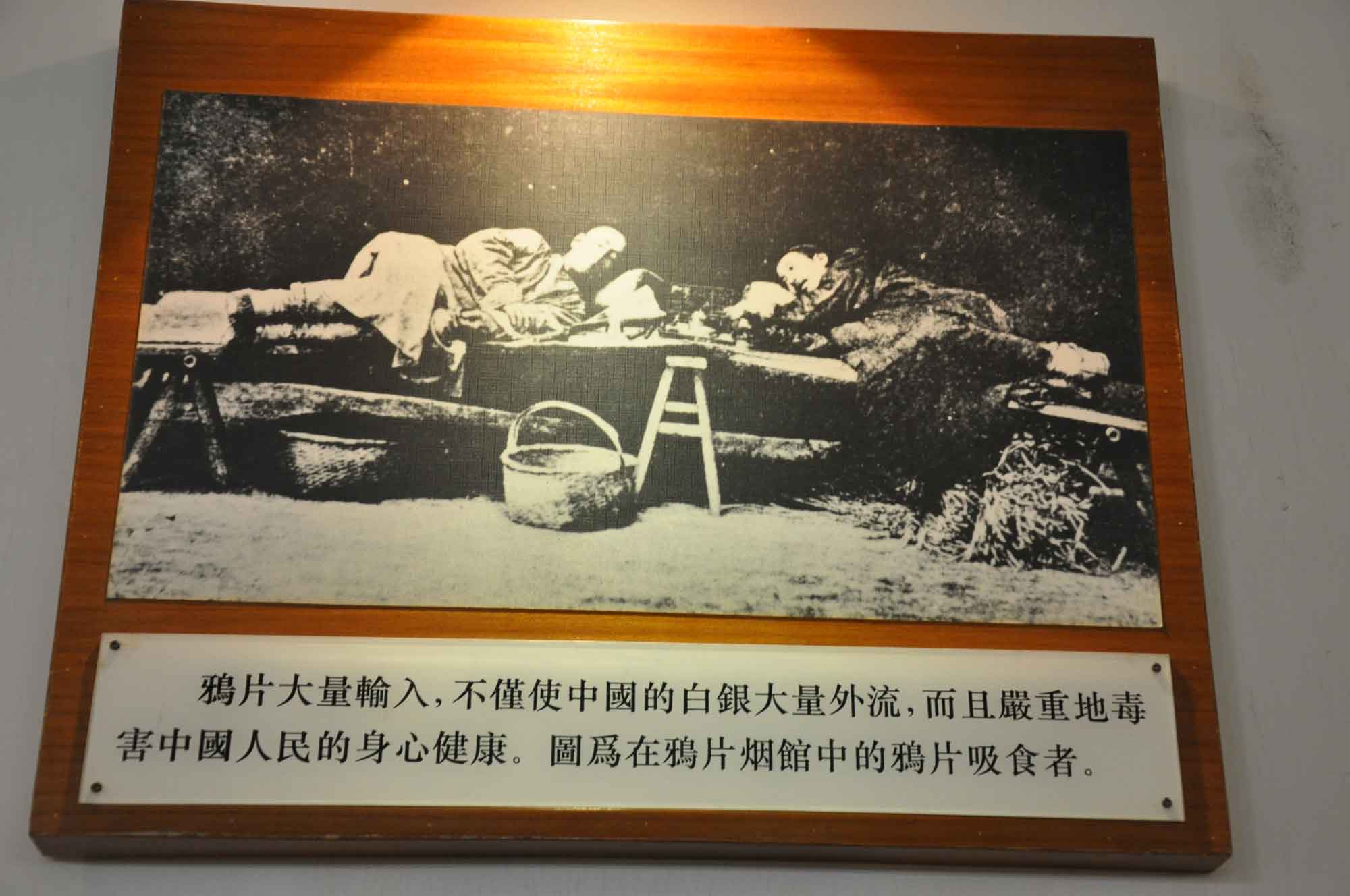 To this day the effects of this disgusting, despicable act still resonate inside the country.  I’ve met plenty of Chinese university students who don’t know the difference between smack or blow, speed or grass.  To them, they’re all the same things, they’re all dangerous narcotics that will destroy your life and leave you hopelessly addicted. 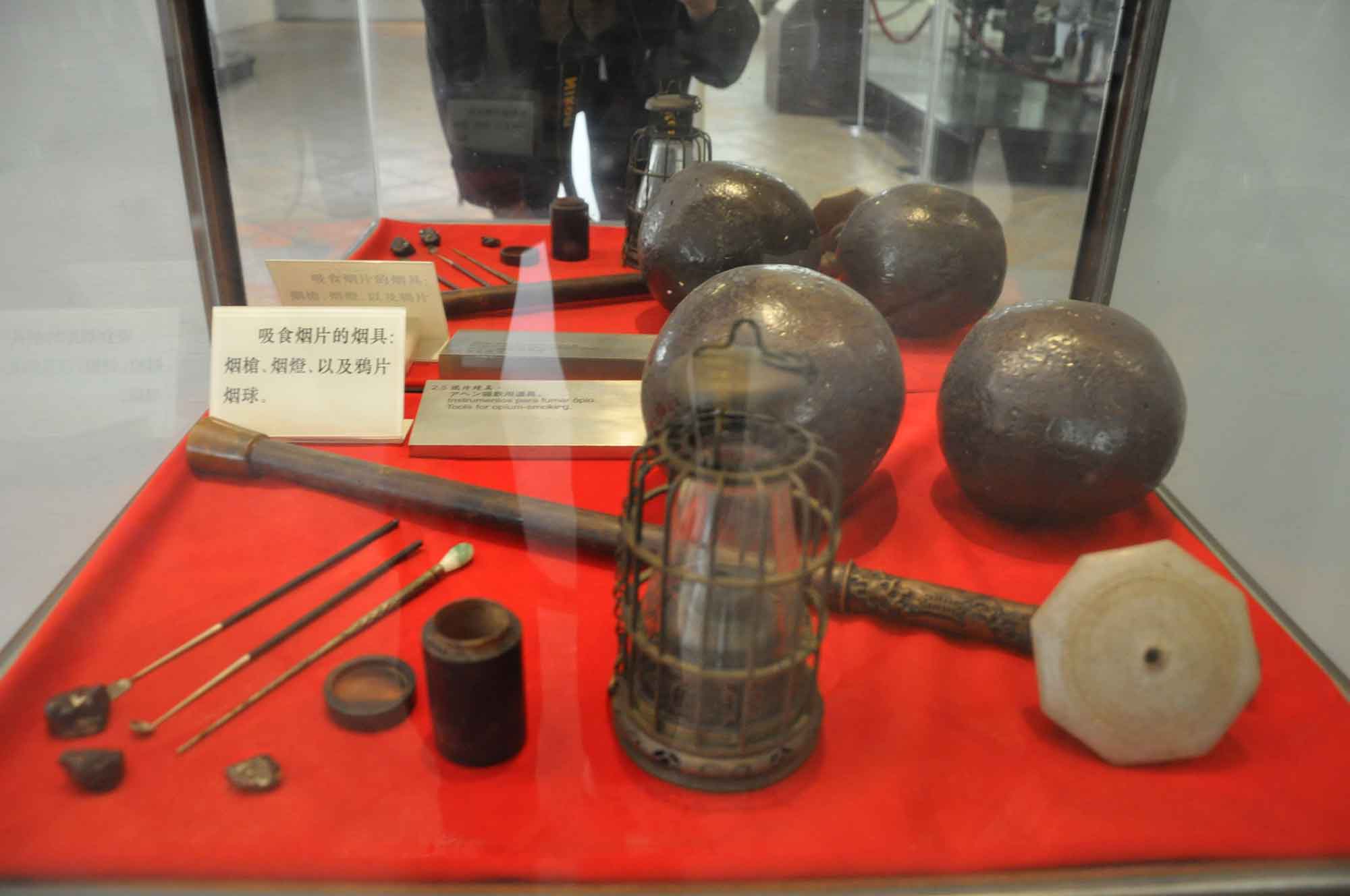 This widespread revulsion to drugs held by most Chinese comes directly from the mid 19th Century opium trade, and is probably the only positive thing to have come from it. 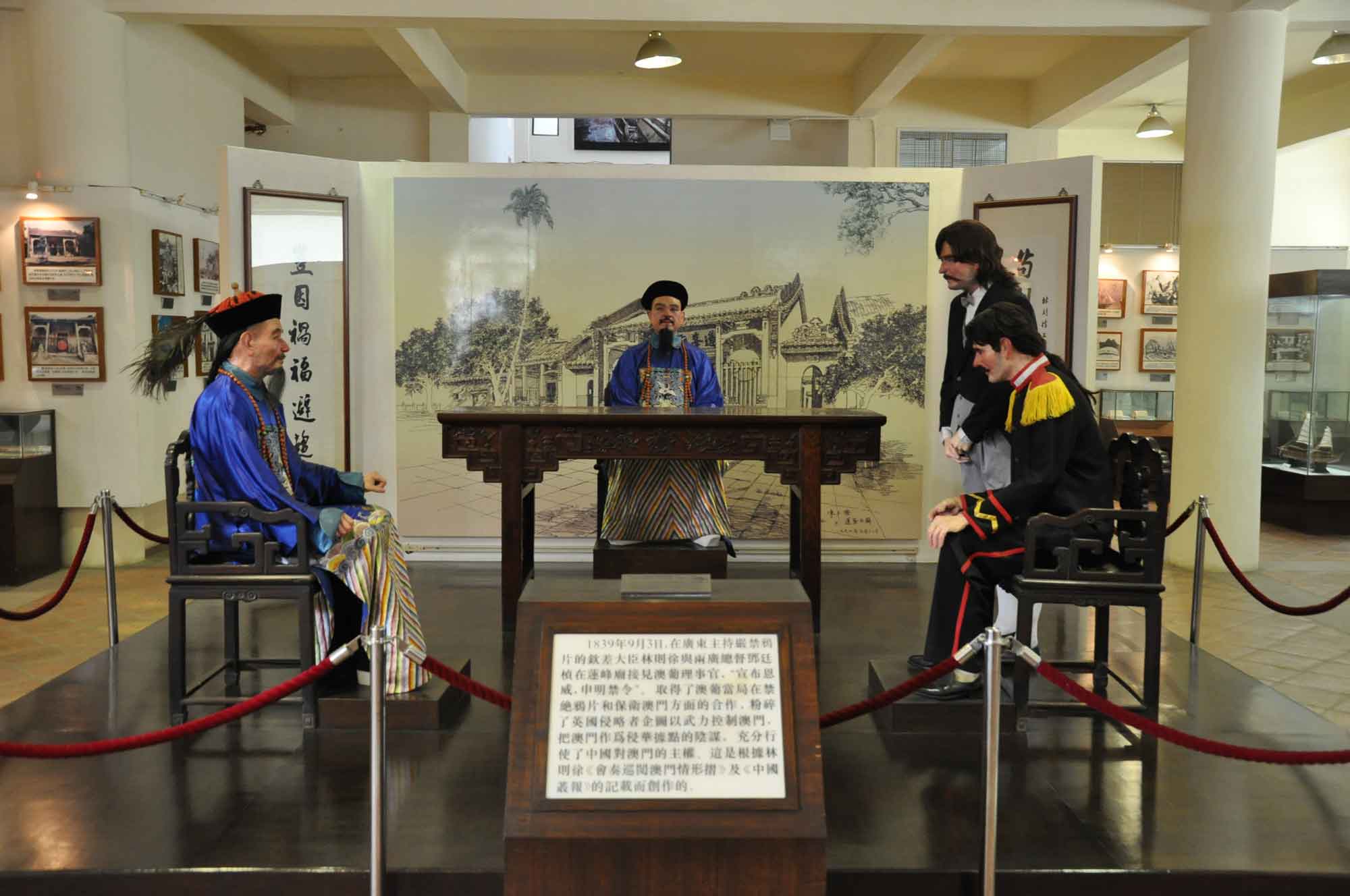 The museum is not large and tickets are only $5.  Everything is in Chinese so bring a translator with you.

Before leaving the temple, we discovered an odd looking boulder near the northern gate, carved with an insignia I later learned was the 19th Century Portuguese crown and crest.  Known as an “Amaral Stone”, it was named after Jose Maria Ferriera Amaral, Governor of Macau from 1846 to 1849.  These stones were used as boundary markers to delineate Portuguese land in this part of Macau, and very few of them still remain to this day. 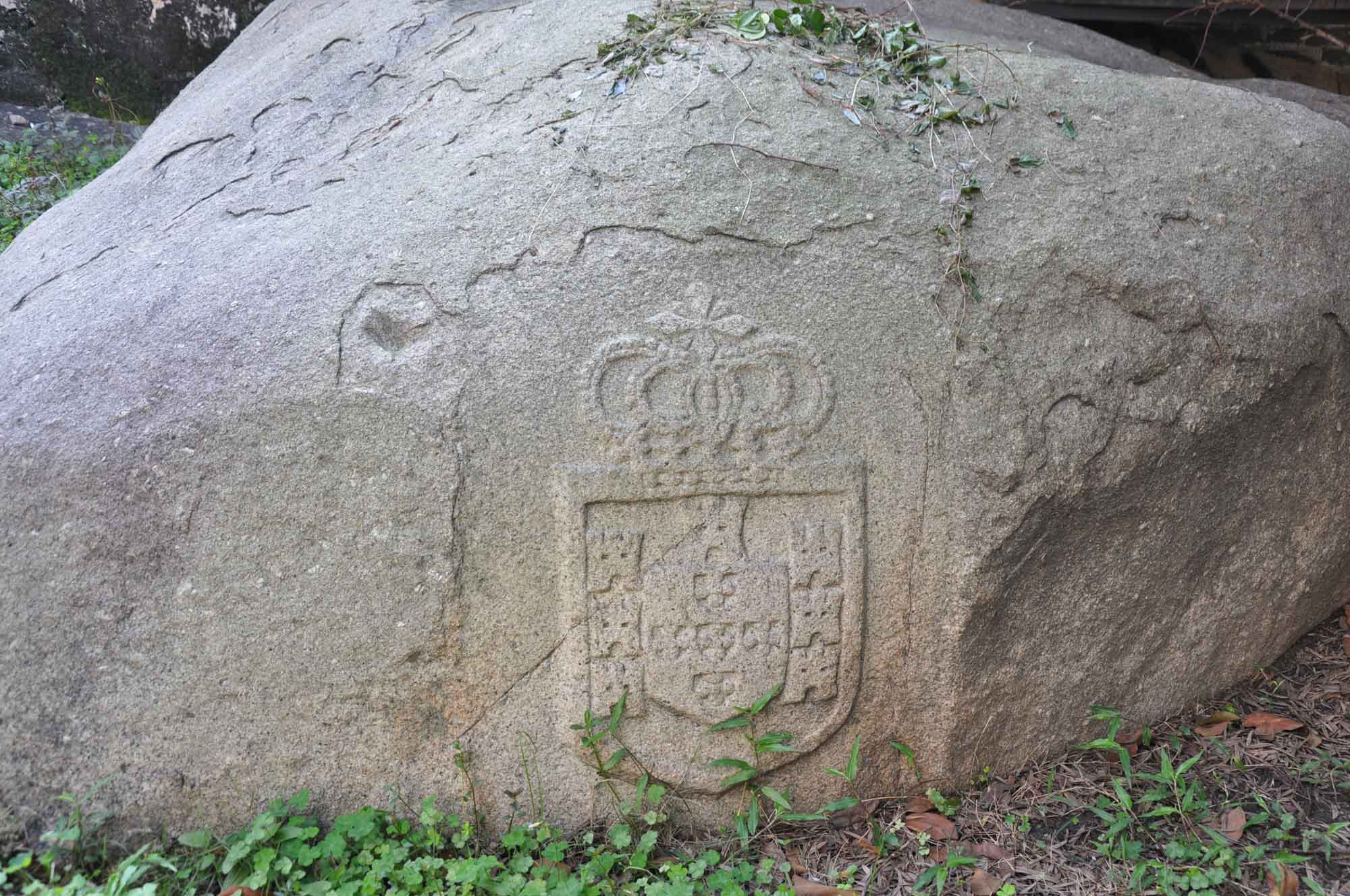 One of most tragic figures in Macanese history, Amaral was a distinguished military official who served admirably in the Portuguese Navy, rising to the rank of Captain.  During the Brazilian War of Independence he lost his right arm at the Battle of Itaparica in 1823.  Amaral took office in Macau in 1846 with a mandate from Lisbon to strengthen Portugal’s colonial authority over Macau, and within three years, he had levied taxes on Chinese landholders, stopped paying ground rent to the Qing Government, and closed the main Chinese Custom house.

Cantonese officials, enraged, put a bounty on the Governor’s head, and on August 22, 1849, Amaral was ambushed on horseback near the Barrier Gate by seven Chinese men.  During the course of the attack his left hand was severed, and without any means left to defend himself, was held down to the ground and savagely decapitated.  The date of the assassination is one of two dates memorialized on the Barrier Gate at the Gongbei Border crossing, the other being the rout of a Chinese fort three days later by local patriot Nicolau de Mesquita, in retribution for the Governor’s murder.