No two gambling cities are ever the same.  Rules vary, comps vary, minimums vary, what you need to know before gambling there varies.  That’s why I’ve prepared this concise overview of the Macau gambling scene, where you’ll learn vital information about Macau’s best and worst games, which comps are useful and how to make the most of your time and money in the Chinese version of Sin City.

Macau has had legalised gambling since the 1850’s.  Fan Tan was the game of choice way back then, and there were more than 200 Fan Tan saloons in 1900.  In 1962, the industry took a big step forward when SJM secured a monopoly on all gambling city wide.  Besides introducing more Western style games, Stanley Ho’s massive conglomerate also improved the ferry system between Hong Kong and Macau, which brought a lot more people in.

In 2001, SJM’s monopoly ended when 5 other concessionaires were granted casino licenses:  Galaxy, Sands, Melco Resorts, Wynn and MGM.  This expansion ushered in the current era of Macau gaming, one characterized by unprecedented revenue growth and explosion.  In 2007, casino revenues stood at 10.5 billion US dollars a year.  By 2013, that number had swelled to 45.3 billion dollars, a 4.5 fold increase in 6 short years.  Year on Year increases averaged well over 30%, with the biggest jump occurring between 2009 and 2011, when casino revenues more than doubled in the space of 24 months. 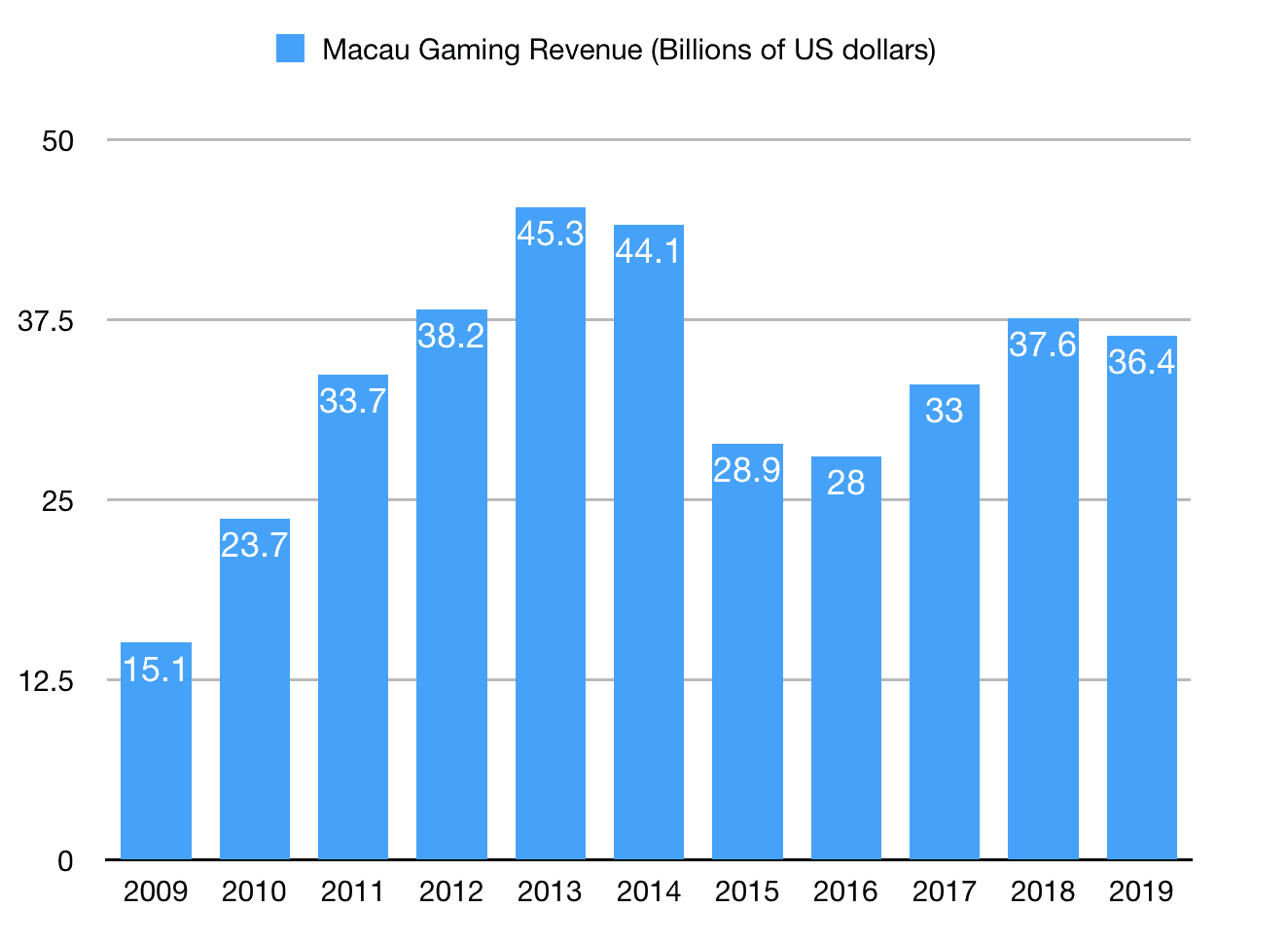 2019 probably saw similar results at the top, with Galaxy and Sands continuing to slug it out somewhere north of 22%, followed by Melco Resorts and Wynn in the mid to high teens.  That would leave SJM and MGM jostling for position at the bottom, with projected revenues in and around 12%.  SJM has really been hurt by their absence on the Cotai Strip, an issue that will finally be remedied when the Lisboa Palace opens in 2020 or 2021.

In general, the six casino operators all run their casinos in the same way, so there aren’t any major differences between them.  All in all, only two things stand out to me: Las Vegas Sands casinos tend to have the best range of games, while the comps are generally worst in SJM casinos, the majority of which are satellite outlets, controlled by third party operators.

The overwhelming majority of Macau’s 40 casinos are located in 3 principal zones: the area around the Macau Ferry Terminal, the Amizade Strip and the Cotai Strip.

The 12 casinos around the Ferry Terminal are mostly smaller venues run by SJM, with the lone exception being the Sands Macao, the only monster casino in the area.

A 10 minute walk west along Avenue D’Amizade will bring you to the main Amizade strip, home to another 12 casinos, the most significant of which are the Wynn, MGM, Lisboa, and Grand Lisboa.

The new development zone for Macau gaming is the Cotai Strip, an area of reclaimed land between Taipa and Coloane, which used to be two islands.  Now it’s all one large land mass, and where you’ll find all of Macau’s largest casinos, like the Venetian, City of Dreams, Galaxy, Studio City, Wynn Palace, Parisian and MGM Cotai.

By the end of 2020, they should be joined by the Lisboa Palace, which is currently under construction by the East Asia Dome.

The currency of choice in casinos is Hong Kong Dollars, although a few places also accept Macau Patacas, aka Mops.

Tipping dealers is rare, so don’t feel the need to do it.  Of course, if you wish to do so, it won’t be refused.

The Macau government made all mass gaming areas on casino floors go 100% smoke free in October 2014, something I thought would never fly, particularly in Asia.  Hats off to them, it’s been a wonderful development.

Macau Gambling: The land of Baccarat

As mentioned above, Macau officially has 40 casinos but I’ve never bought that line.  To me, a casino is a place that offers a wide range of games (around 5 at least), along with some slots and video poker. If judged by that criteria, then half of the casinos in Macau aren’t what I’d call casinos at all, but Baccarat Halls instead.

A Baccarat Hall is a place where 95% of the tables are Baccarat and only two or three other games are offered, most likely Sic Bo and Blackjack (and those tables might not even open.)  To me, that’s not a casino and unless Baccarat is your game there’s no need to ever visit them.  Just leave them to the Chinese.

To get an idea of just how prevalent Baccarat is, look no further than the chart below, which lists games according to their 2019 Revenue. 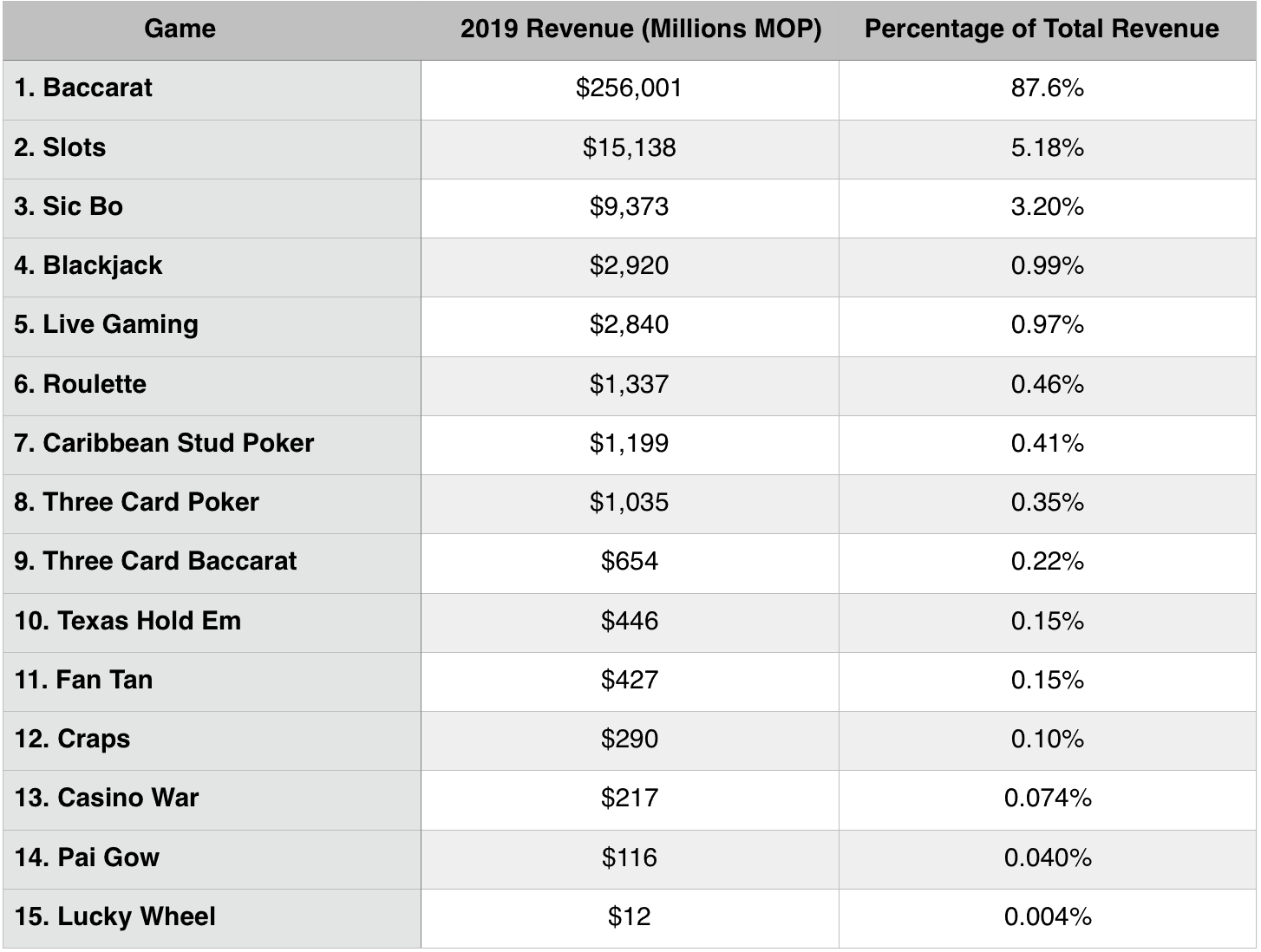 Unbelievably, Baccarat accounted for a staggering 87.6%, with almost every game under 1%!

If a broad range of games is important to you, then you need to think big, as in the Big 12 casinos: Grand Lisboa, Sands, Venetian, Sands Cotai, Parisian, Galaxy, Studio City, City of Dreams, MGM, MGM Cotai, Wynn, and Wynn Palace. Truth be told, 95% of the tables in those casinos are Baccarat as well, but at least they offer 5 or 6 other games too.

Besides the Big 12 casinos, Ponte 16, Landmark, Oceanus, and the Lisboa are excellent venues as well, although the latter is very Chinese.  I like them because the game selection is just as good as the Big 12 casinos (and sometimes better) while the minimums are a touch lower.  Which brings me to my next point….

Macau Gambling: The stakes are high and so am I

Macau is an extremely expensive place to gamble.  At the Big 12 casinos, standard minimums start at $300 HKD, or 40 US dollars.  Ouch.  Electronic gaming machines have inundated the market recently that offer lower minimums of $20 to $100 – but so what?  They’re electronic gaming machines, so they’re not as fun, and you can only play Baccarat, Sic Bo, and Roulette on them anyway.

As far as $100 Western style games go, Blackjack, Caribbean Stud Poker, Craps, Roulette and War still remain, but you might have to go to a Baccarat Hall to play it.

In fact, you ask me what my biggest criticism of Macau gaming is, it’s that there aren’t enough low limit tables.  Or to put it another way, that I’m not rich enough to play there!

To ensure the list is up to date, you can always double check using the Search Games function found here: Macau Games.

Ok it’s expensive, but at least the rules are good, at least compared to Vegas.  Macau has 5 games with a house edge under 1.25%: Blackjack, Craps, Baccarat, Fan Tan and Pai Gow, if you’re banking at the Lisboa.

The best Craps is found at the City of Dreams and Studio City (5 times odds) while the standard number city wide for Blackjack is only 0.16%, which is obviously quite good.  However, every casino uses an electronic shuffler, so forget about counting.

After these 5 games the good times end, as all other games are over 2%.  For the best rule among these 2% plus games look no further than Roulette.  All the tables in the city are single 0, a substantial improvement over the double 0 wheels that pollute Las Vegas.  Speaking of which…

I’ve met a lot of people who don’t enjoy gambling in Macau.  They say it’s not fun and they’re probably right.  Party pits, free flow booze, friendly dealers, hot waitresses working it for tips, a festive fun atmosphere… no, no, no, no and no.  Gambling is a serious venture in Macau and the vibe on the floor reflects it.  The vast majority of casinos are entertainment free with absolutely nothing going on, other than some background music if you’re lucky.

It probably also doesn’t help that you lose the banter with other players and the dealers, since 99% of the dealers and 97% of the other players can’t speak English.  No one really drinks anything either, but don’t let that stop you!  The tide finally turned in 2018 and free alcoholic beverages are now readily available in every large casino in town, including every one on the Cotai Strip.

The best free drinks are found at the Plaza casino, but you’ll sure be paying for it when you make your bets.  It’s certainly not a cheap place to gamble.

I’ve stopped writing down the information related to promotions, because there aren’t enough good ones going around to make a difference.  The vast majority of Baccarat Halls do nothing, and while most Casinos will put something on, I don’t think they’re very useful for the recreational gambler.  Besides that, I think some of the promotions are rigged anyway.  I’ve participated in many a daily draw that just looked like an out and out sham.  Judging from the reaction of the winners, they knew they had it locked up before the numbers were called.

Player cards are widespread in Macau and 95% of casinos offer them.  The process is the same as everywhere else – just insert the card into the slot machine or hand it to the floorman before you start playing.  Points are then credited to the card according to how much you gamble which can later be redeemed for gifts and prizes.  Most of the nicer prizes like MacBooks and iPhones require a huge amount of points and you’re much better off just going to a store and buying what you want outright, rather than chasing it in a casino.  The shiny gift redemption catalogues sure look nice, but it takes a massive effort to redeem anything halfway worthwhile.

For that reason, I think the best promotions in Macau are tied to daily point accumulation, especially for recreational gamblers.  Most major casinos offer them and for more information, just follow the link to VIP Comps.

Player cards are also useful for shopping and dining discounts when frequenting the hotel’s shops and restaurants.  In general, the discounts range from 5 to 20%, which is not inconsequential.

All the best comps in Macau are reserved for the high rollers, aka VIPs, aka whales.  Free rooms are available at smaller hotels like Grand Dragon and Grandview after buy ins of $10,000 or $20,000, while a nicer place like the Sofitel requires $60,000.  The downside is that you can only play Baccarat afterwards.  If you have a much larger bankroll ($100,000 plus) the options really open up in the form of private junkets or VIP dead chip programs that return cash back rebates and other room and dining comps.  For more information on that, please check out our VIP Intro.

For more detailed information about Macau’s best casinos, entertainment, drinks, player cards and more, have a look at our Macau Casino Guide below!