Lunch finally!  Mu Yi and I decided on one of our favorite places, the small and very local Sheng Li, or Cafe Vitoria in English. 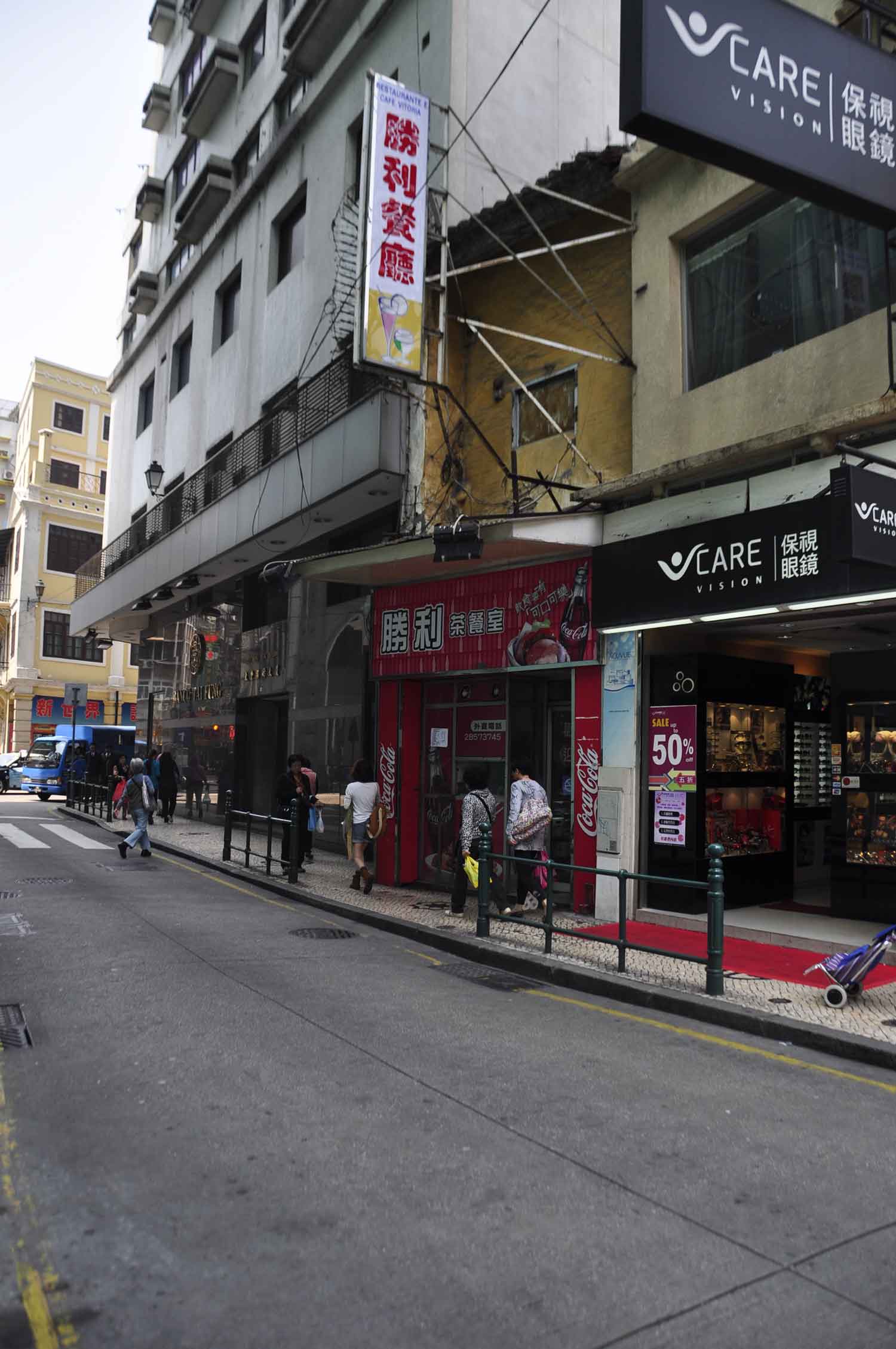 Macau must have two hundred kinds of this same type of restaurant, all serving the same Western-Hong Kong-Cantonese style fusion food, with most dishes $20 to $50.  The clientele at these restaurants are usually older patrons, most of them in no hurry to do anything at all, preferring to leisurely flip through a book or newspaper, while barely acknowledging their food or tea.  When they do finally decide to eat, they’re rewarded with some pretty decent Macau style food that doesn’t cost a fortune.

Service is another reason why I like Sheng Li.  The first day I ever went there I forgot my wallet at the San Va and after explaining my situation, the owner just let me leave to go and get it.  She didn’t ask for a phone or a passport or anything as collateral.  She just nodded her head, smiled, and said sure.  My favorite waitress in Macau also works there, a very polite and cute young lady from Guangdong, who is a niece of the owner.  We snapped this picture together that day. 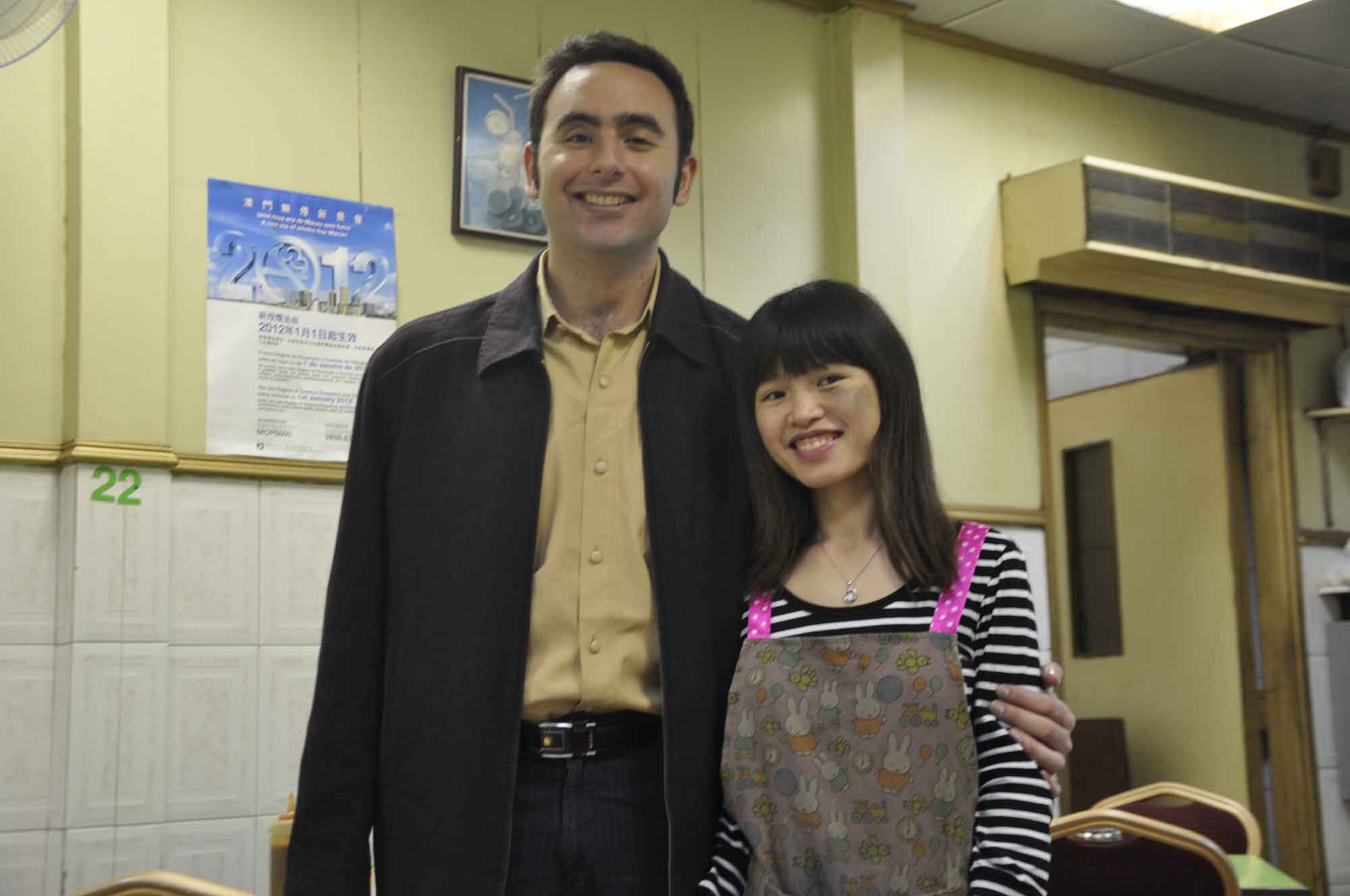 The pork chop sandwich was excellent, very fresh and juicy while she thought the chicken soup was done in a Western way, using green pepper and onions, not like how it’s made in Guangdong.

While she certainly enjoyed it, she’s not sure if Chinese people will like it.  For my part I just sat there sipping on my glass of chocolate milk, still disgusted at the thought of eating anything.  (For what it’s worth I’ve included a pic of what I usually eat there, the roasted chicken and french fries.  Going for only $48 it comes highly recommended!)

Mu Yi’s lunch and my chocolate milk (pretty much making it a lunch for one then!) ran only $84.  I always hate hearing all the talk about Macau restaurants being so expensive, when they have a hundred places like Sheng Li that serve great food for $10 US.

Sheng Li is located a block west of Senado Square on Rua dos Mercadores.  Just proceed along San Ma Lo towards the Sofitel and then turn right down Rua de Mercadores.  Sheng Li will be on your left.  If you continue further down the street you’ll come to another one of my favorite restaurants, the Cantonese Hao Jing Fan Dian (好景饭店).  It’s located down the little lane directly opposite of this famous yellow building. 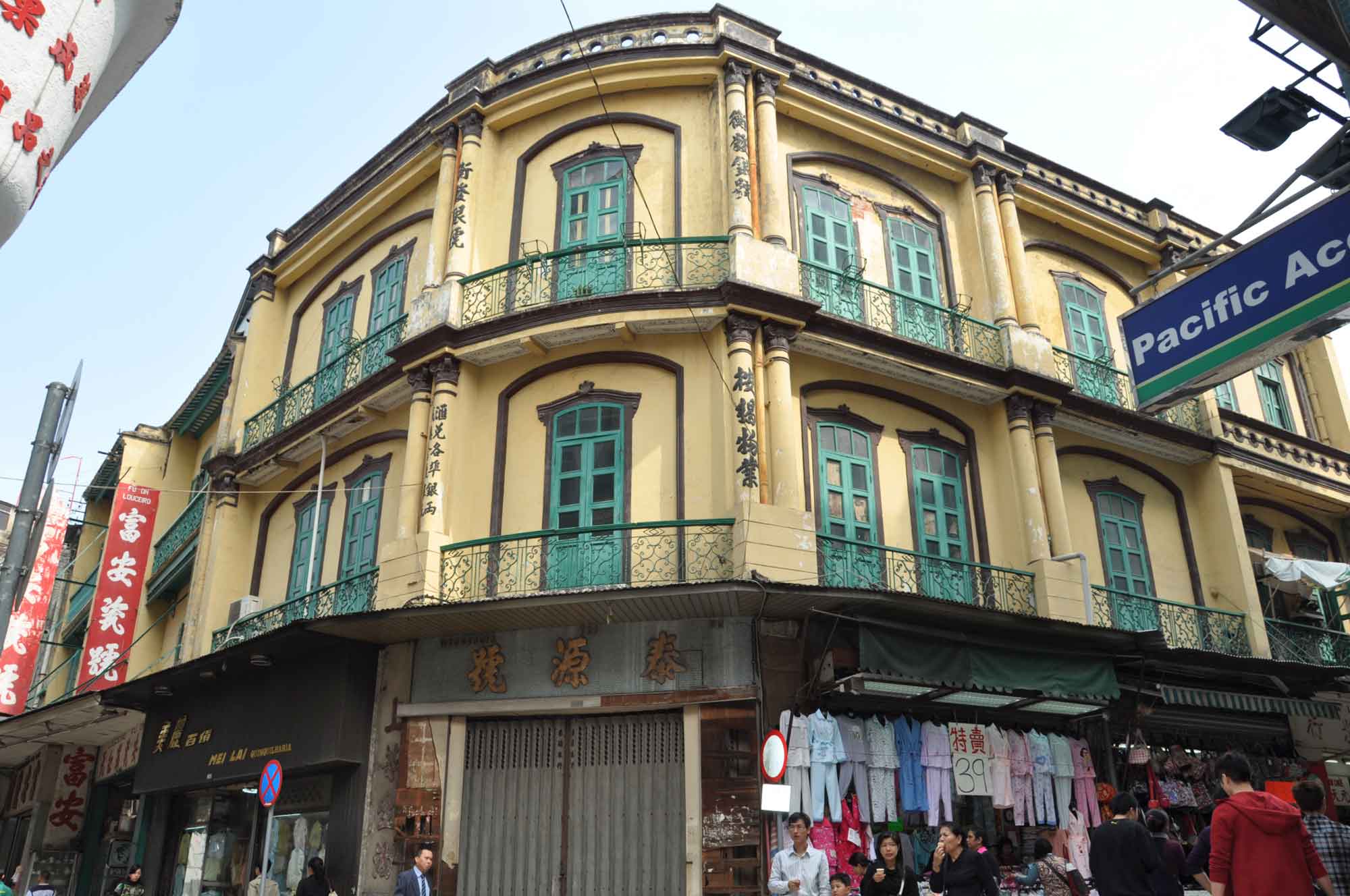 The big plan for our afternoon was to visit the Maritime Museum, but I took Mu Yi to the Street of Happiness first, down past all the shops selling dry meat and local pastries. 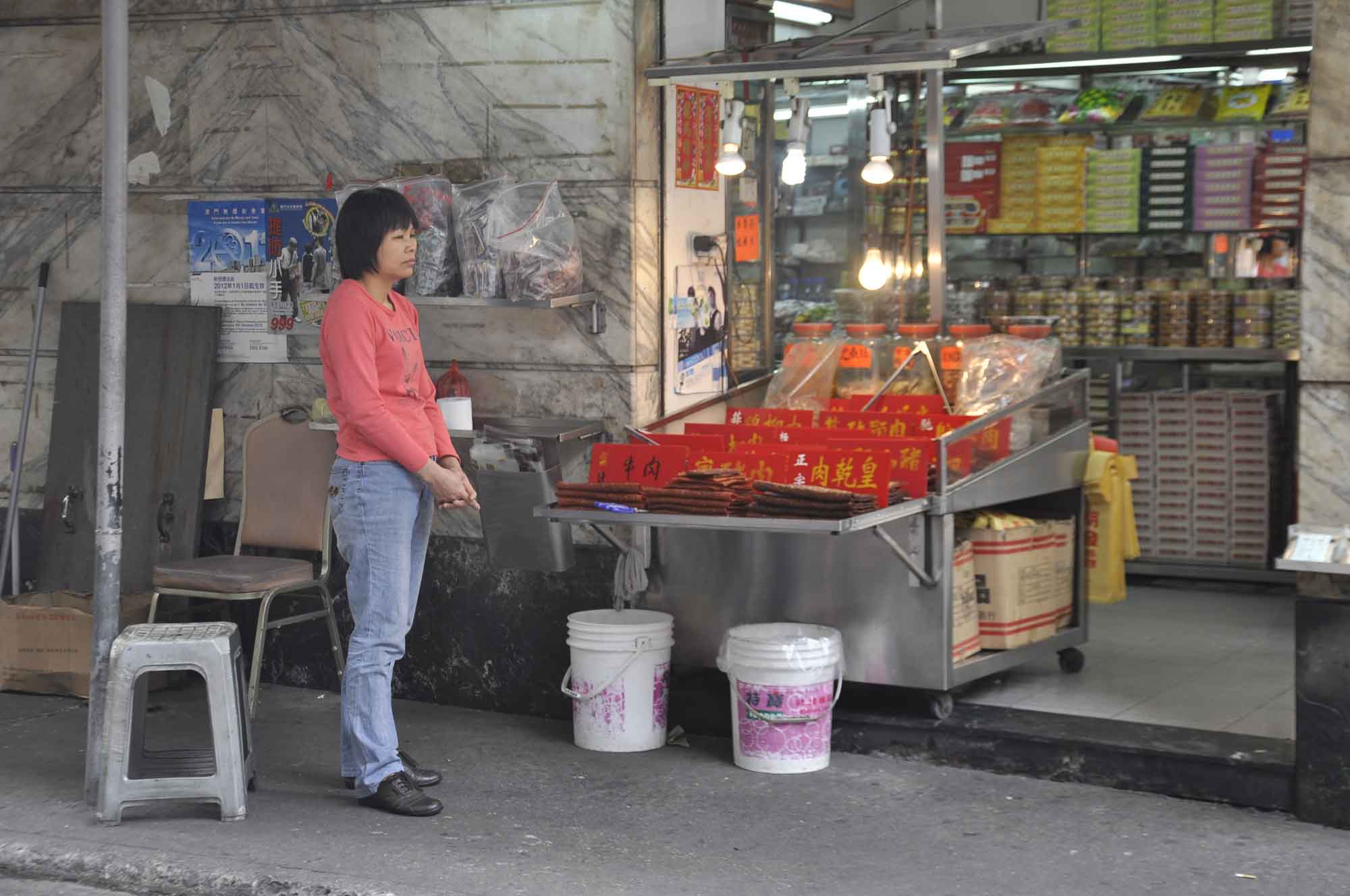 The Street of Happiness was famous before for being the city’s red light district and you can still see the second floor windows where women used to sit, waiting for customers.  If the window was open, it was game on, but if it was closed, the man would have to keep looking. (I’m pretty sure that’s how it worked.) 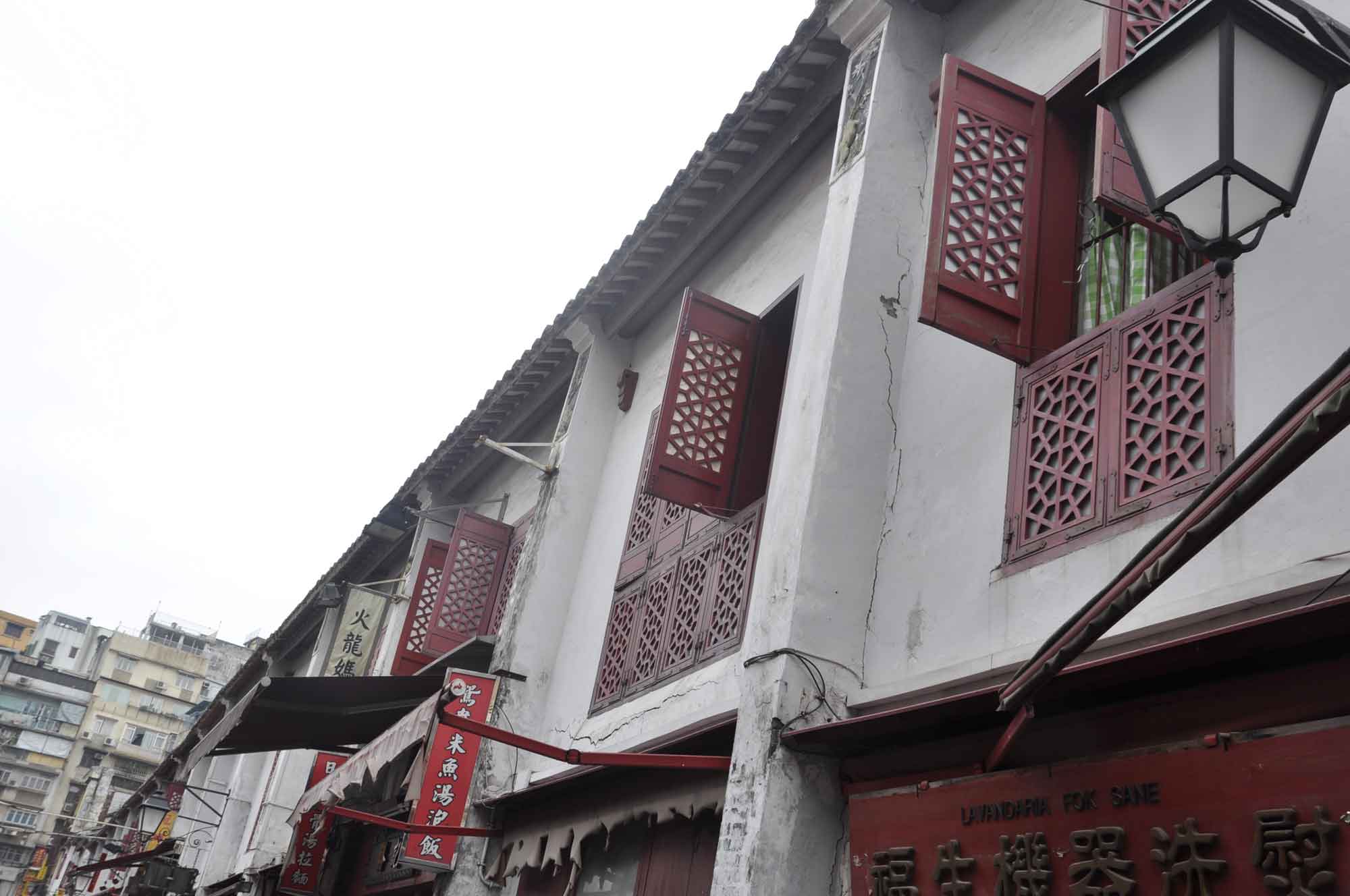 These days the Street of Happiness is known for having Macau’s oldest guesthouse – Mu Yi’s much maligned, but my much beloved, San Va, as well as Fat Siu Lau, Macau’s oldest Western style restaurant.  Fat Siu Lau has been around since 1903 and after going there you’ll know why.  You don’t serve pigeon and lamb like that and then close shop.  There’d be a public outrage. 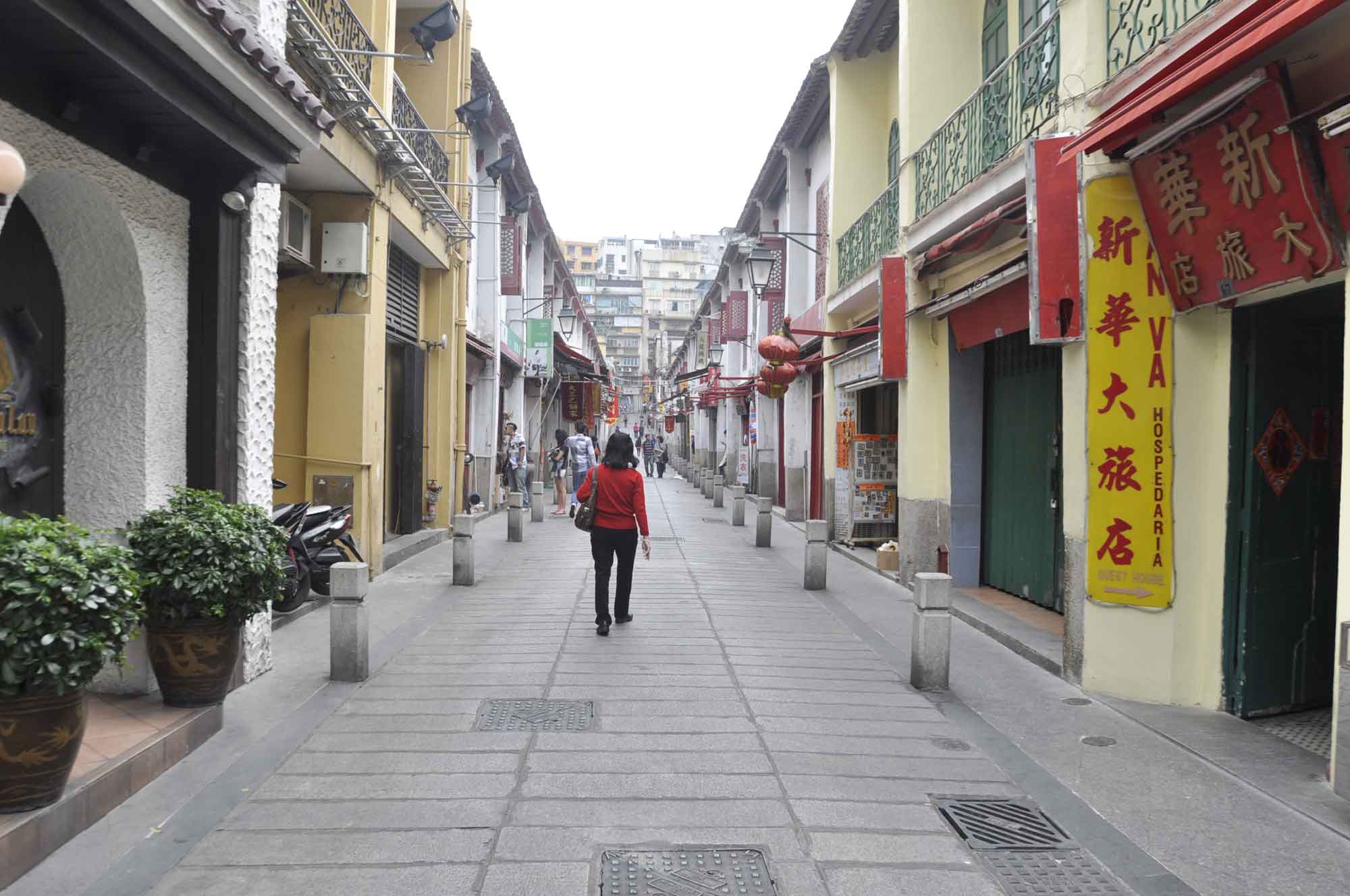 After the Street of Happiness, Mu Yi and I walked over to the nearby Patio dos Cules, for another sordid glimpse into Macau’s past.  Cules translates into Coolie in English, which was derived from the Chinese term Ku Li (苦力), or “Bitter Labour.” 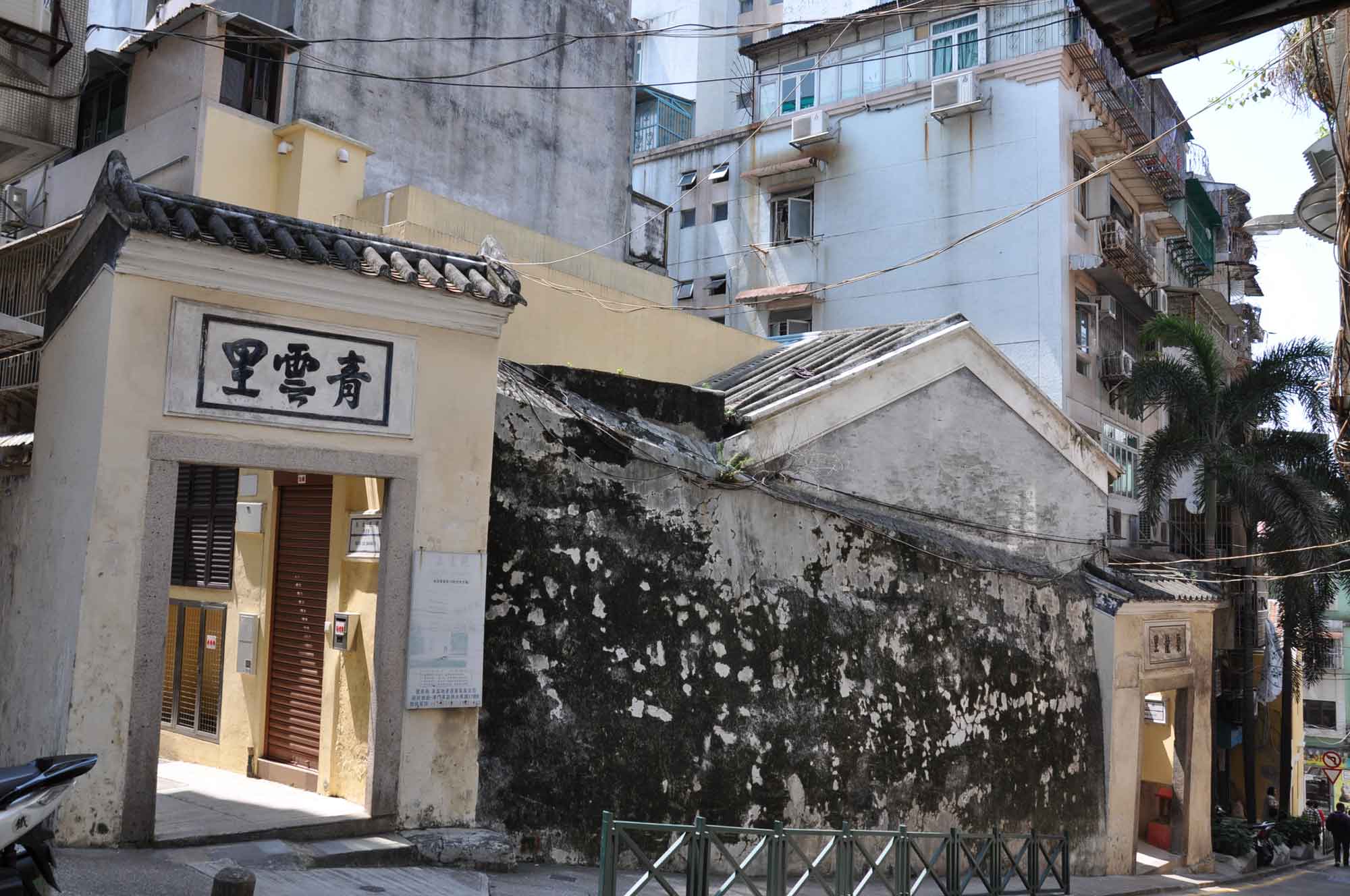 These fortified enclosed houses on Patio dos Cules were way stations for Chinese from the mainland who were either kidnapped, conned or purchased, and then sold into the overseas slave trade.  They often ended up in South America or the West Indies, and suffice to say, precious few of them ever returned – for obvious reasons. 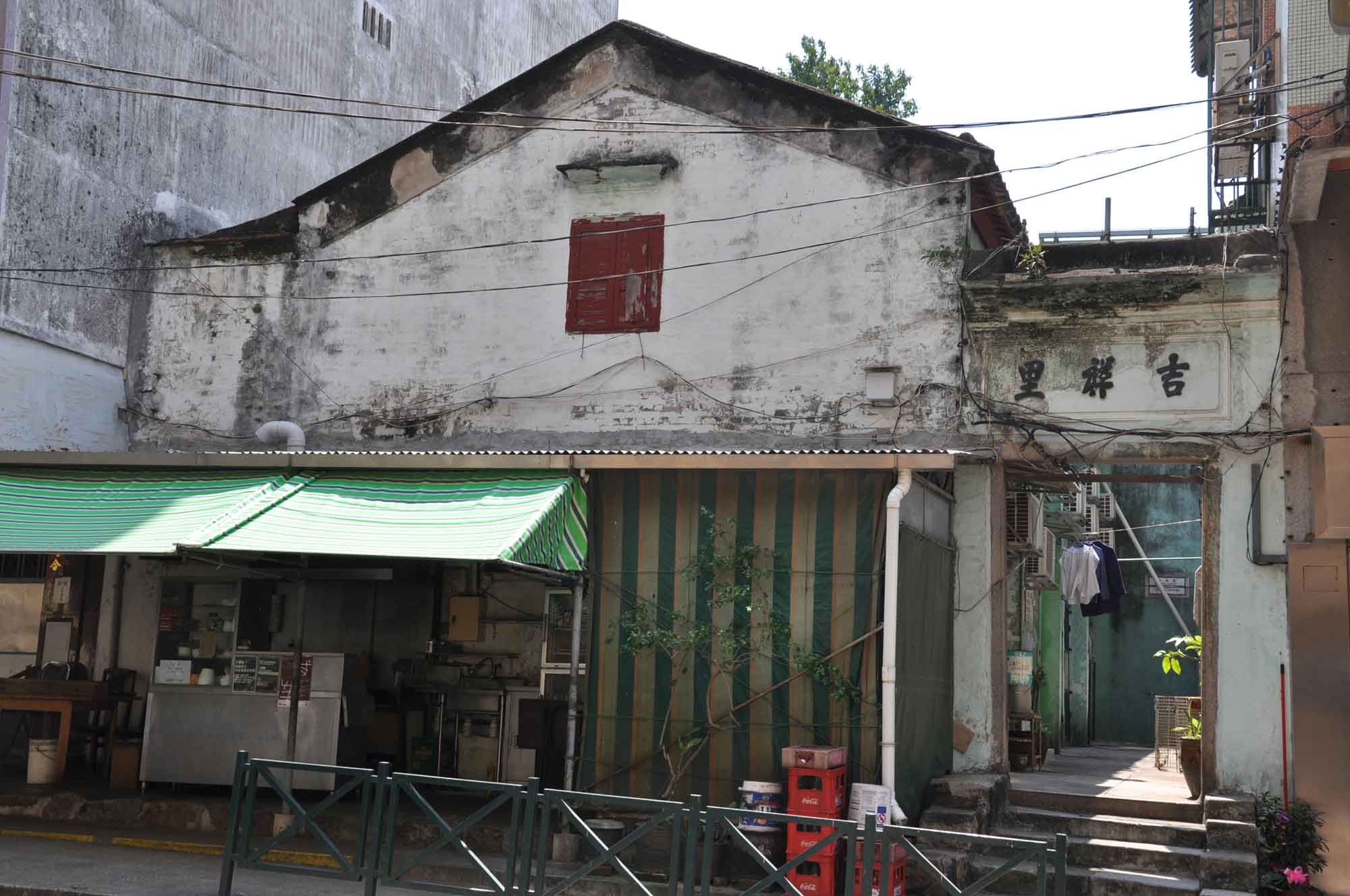 The agents who engaged in this despicable business were predominantly Chinese and referred to the people they bought and sold as “pigs”, a filthy trade that flourished in Macau for some 25 years between 1851 and 1875.  It was estimated that 500,000 Chinese passed through Macau during that time, held captive in enclosures such as these known as barracoons, their last home in Asia a gloomy prison in a residential area, only seconds away from the stately buildings of St. Augustine Square. 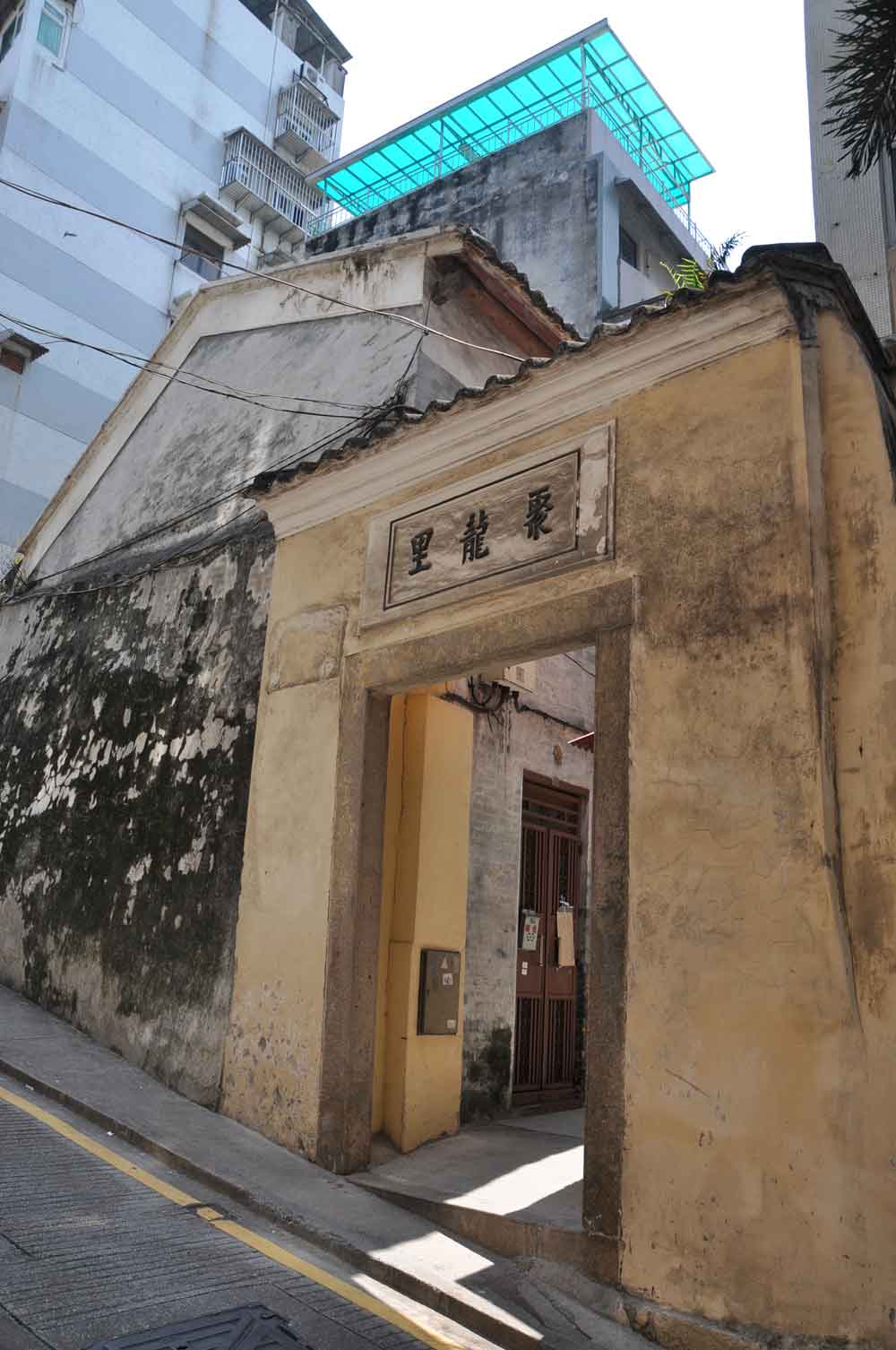 After Patio Dos Cules, Mu Yi and I continued towards the Maritime Museum, through an area of town that is a heavy tourist zone, home to 9 UNESCO World Heritage sites.  Formerly a very rich part of Macau, I think all the money has since moved a little east, up to Barra Hill.  Just before we hit the museum, we stumbled onto a small exhibition inside Pastelaria Koi Kei displaying the packaging of 40 or 50 year old products, mostly of cakes, pastries, candy, cigarettes and wine. 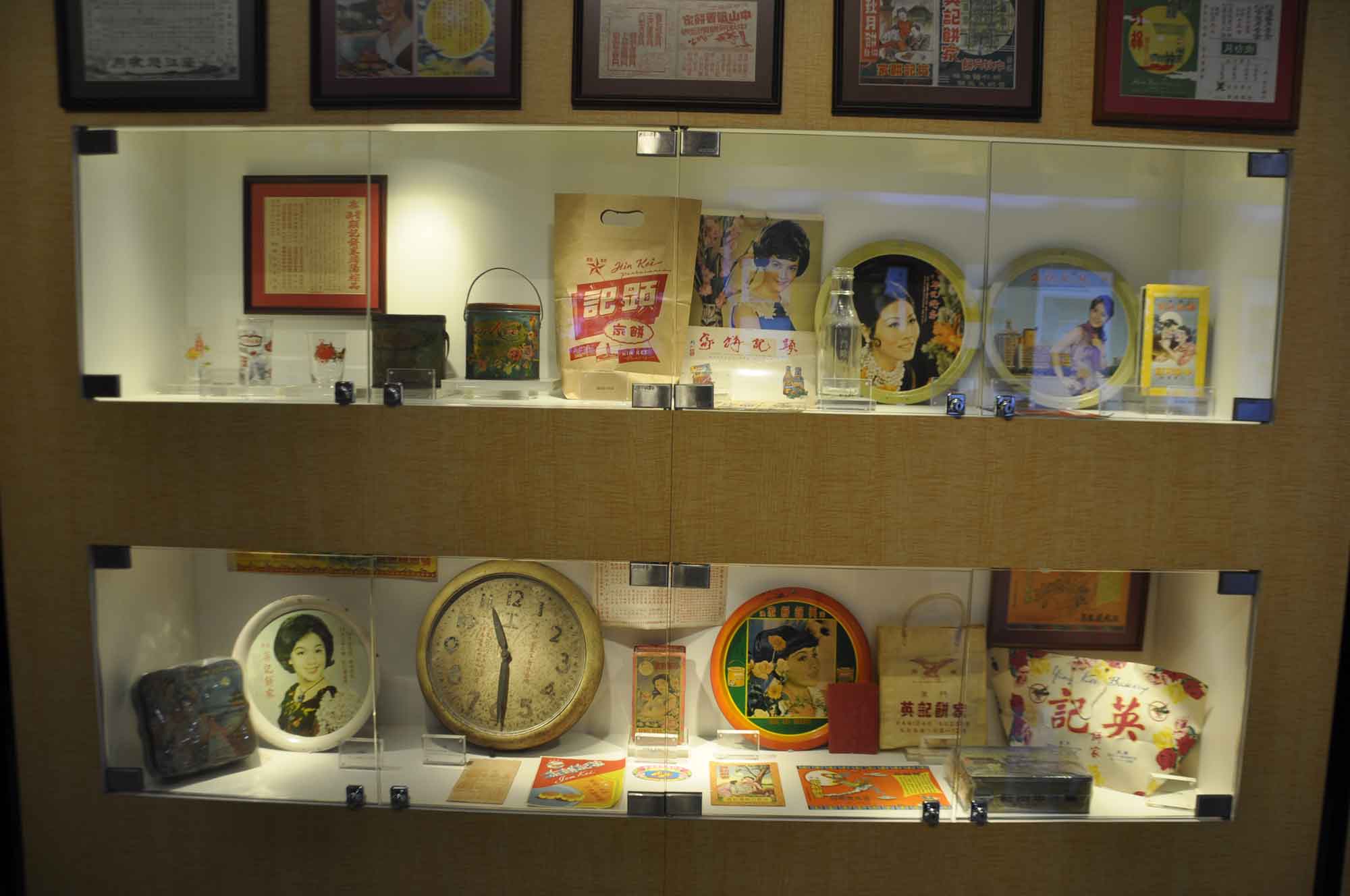 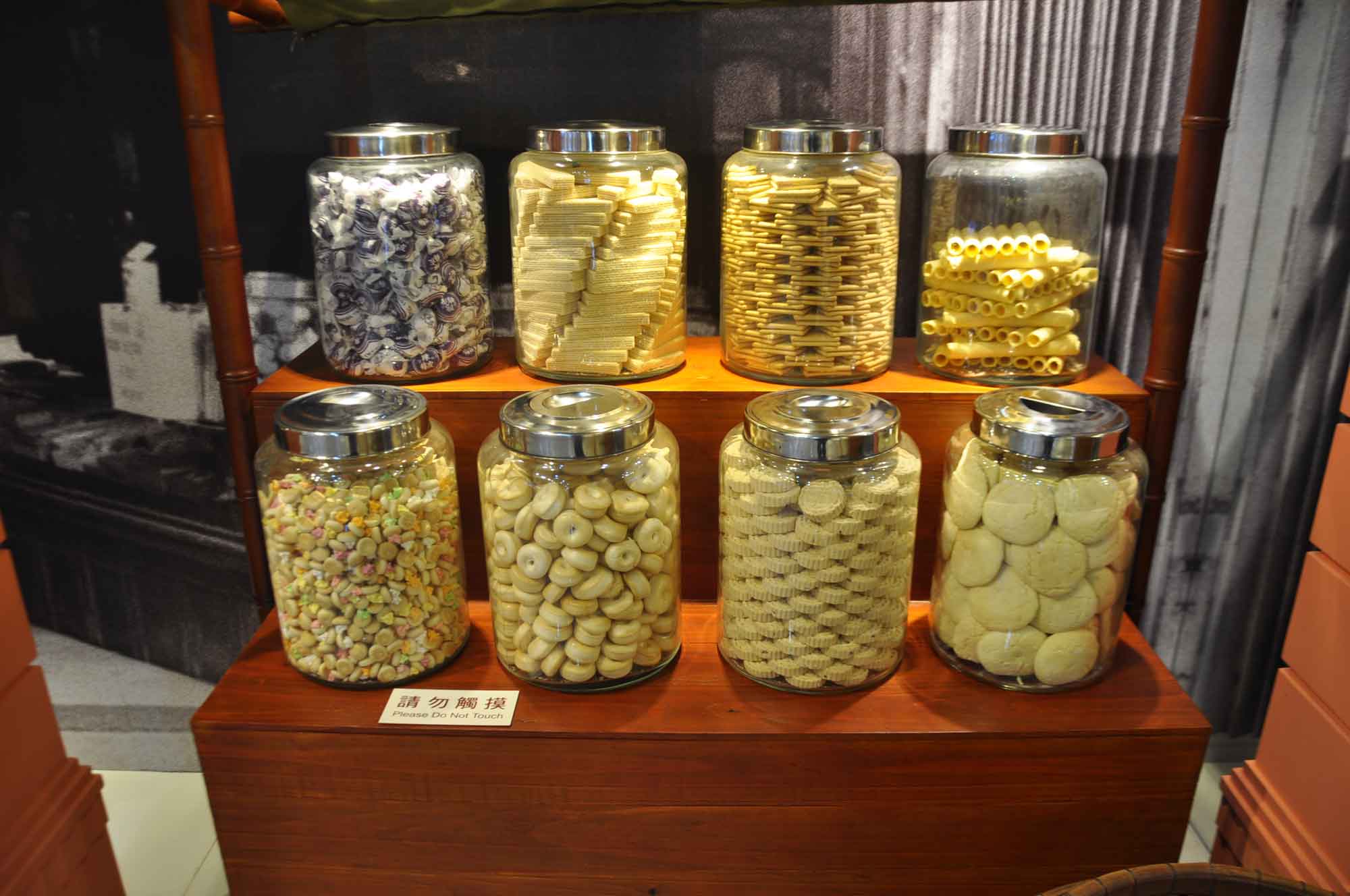 I must admit that Mu Yi was a lot more excited than I was, checking to see what ingredients they used, how much the products used to cost as well as the style of the models from that era. 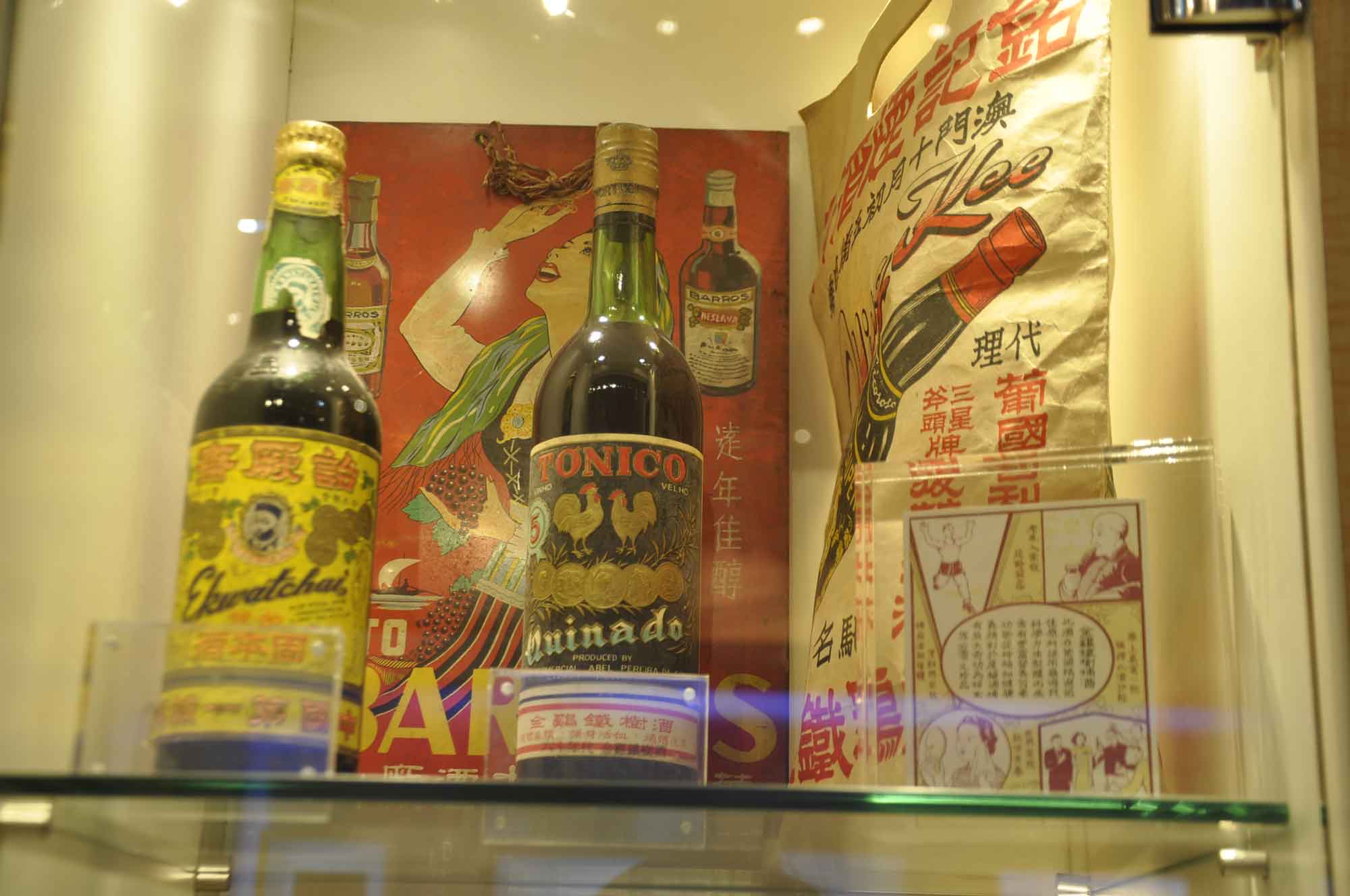 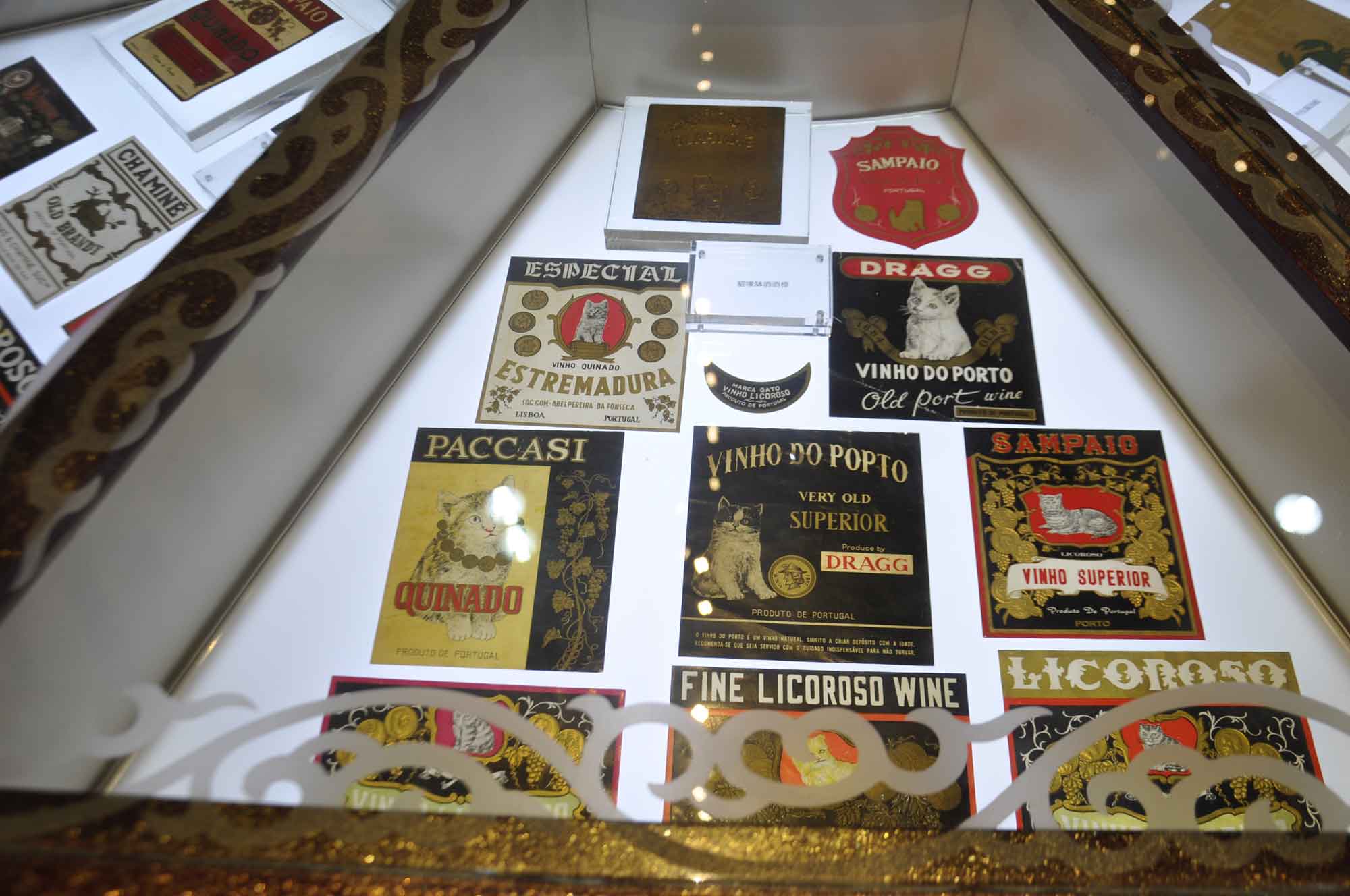 For my money, those very virtuous babes looked like women from the 50’s, and that was one fine decade to be a man.  More feminine they could not have been, and I’d personally love to see that style come back. 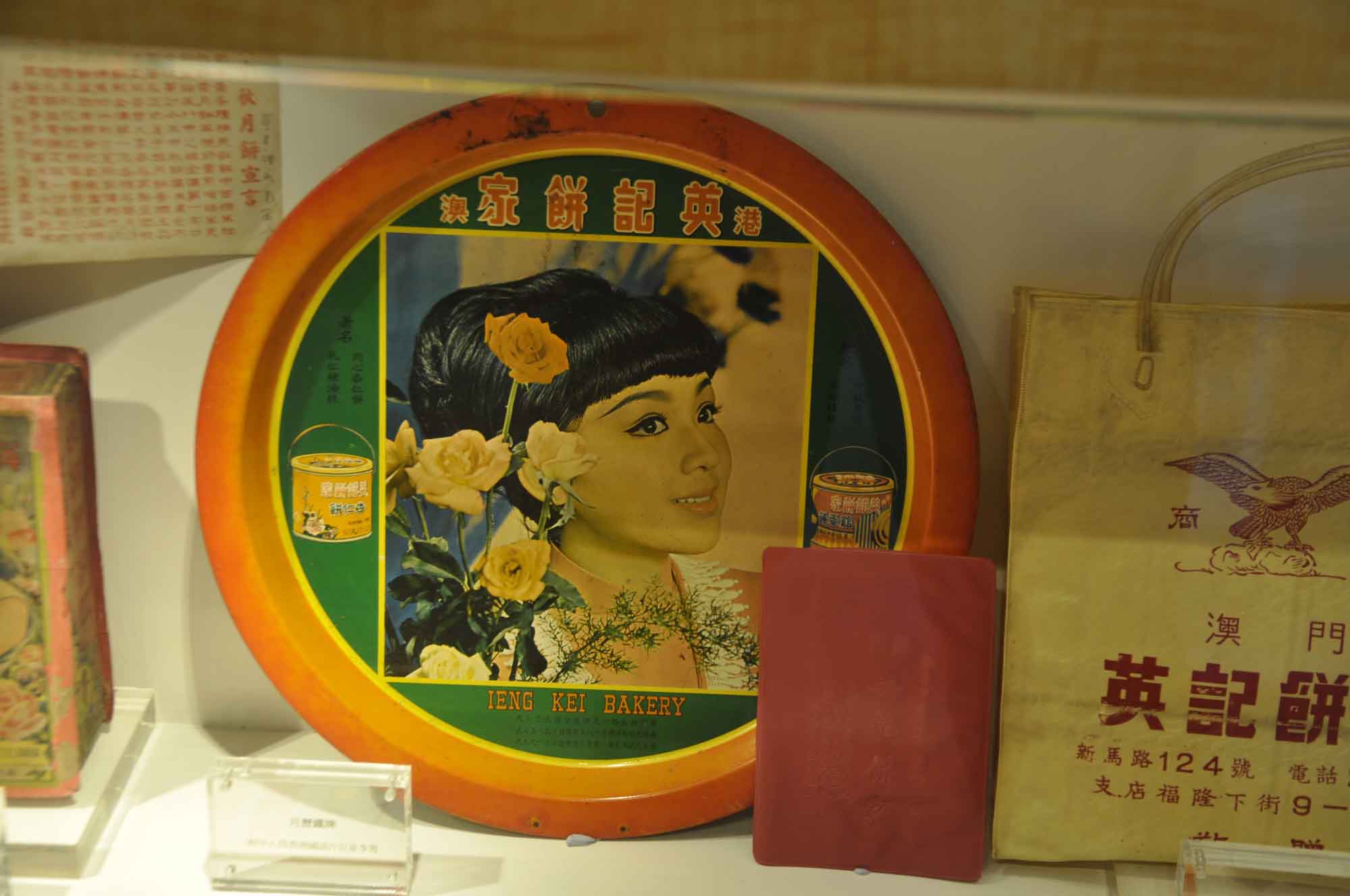 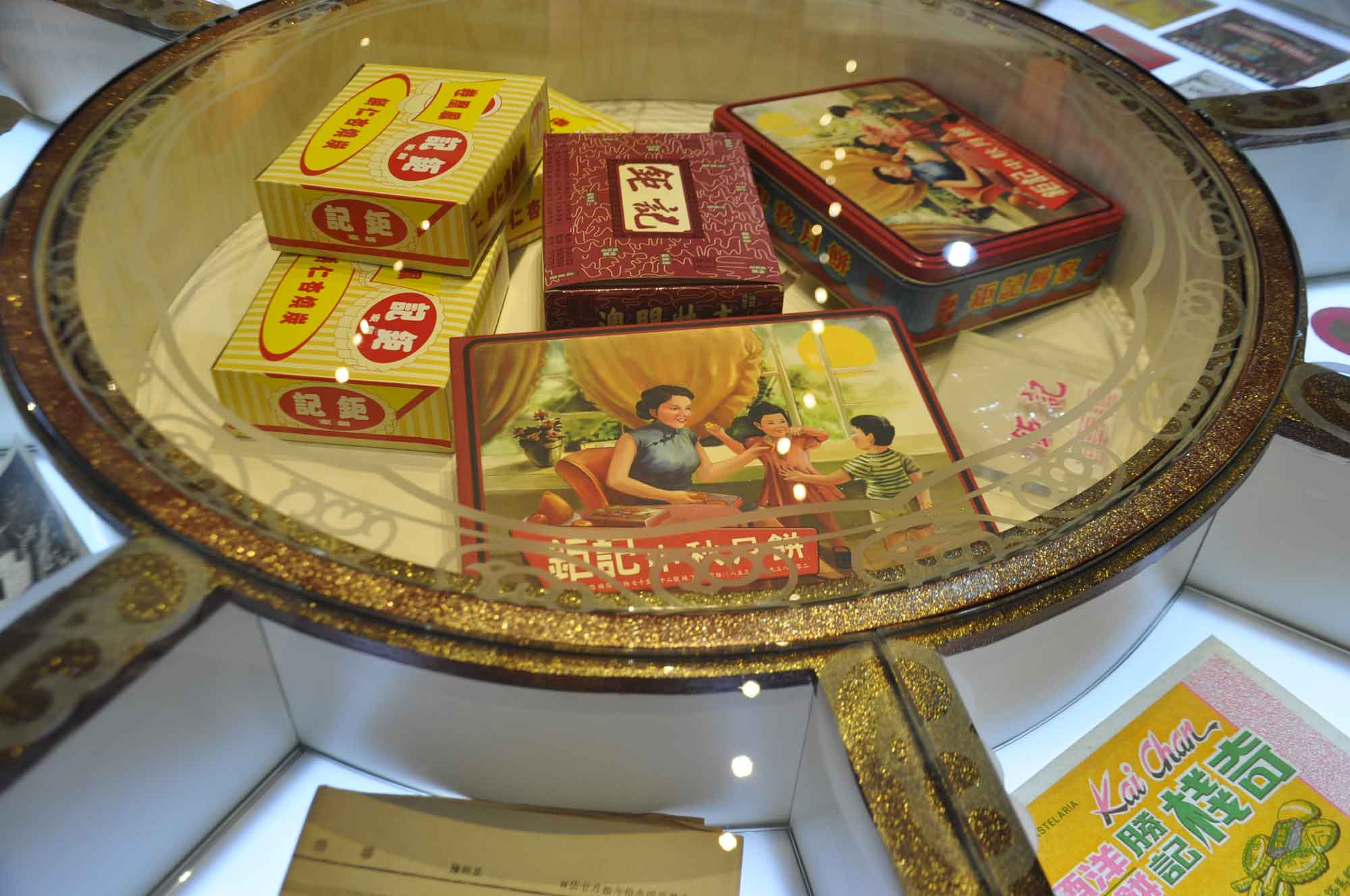