I don’t think the locals call the intersection of Travessa do Mastro and San Ma Lo anything, but for me it’s always been the “The Click Clack Corner”.  Pass by any evening around suppertime and you’ll be serenaded with the continuous clatter of knives and scissors chopping and bopping away. 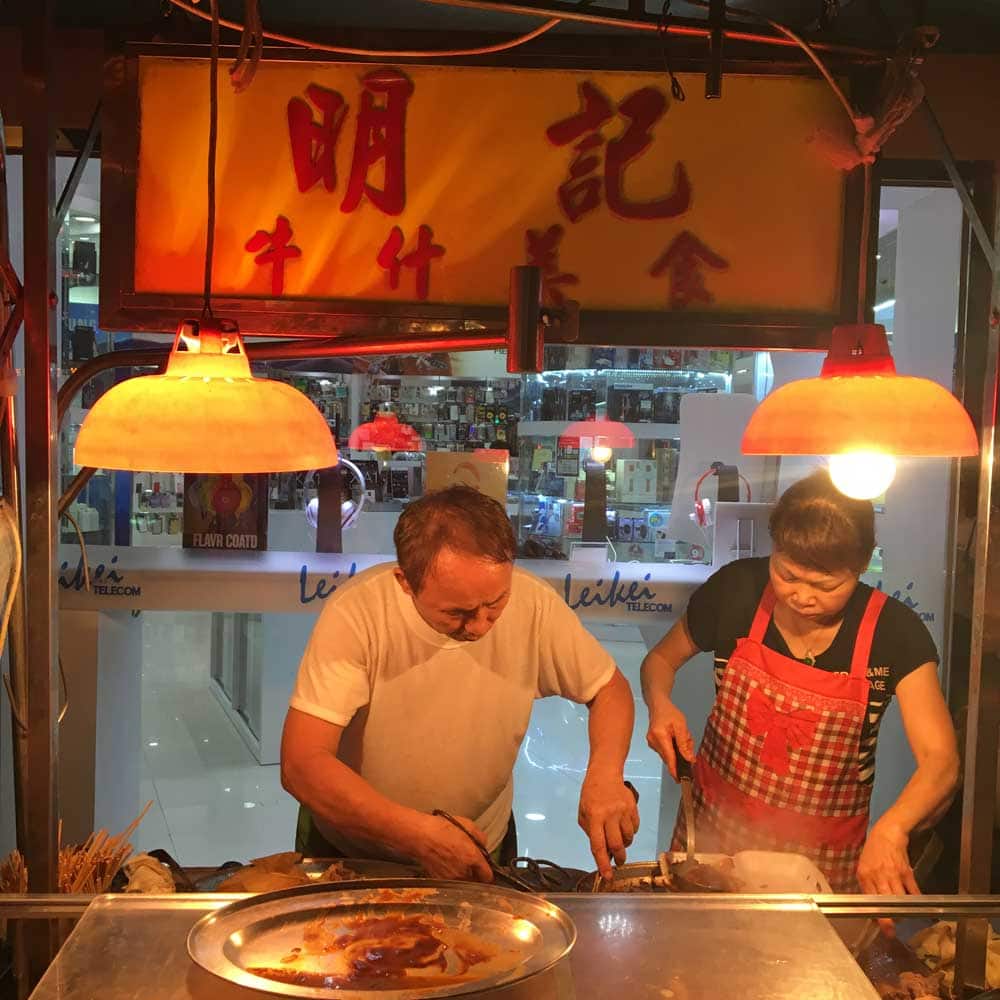 The two people who run the stall are total veterans of the street food industry, and I’ve seen photos online of them dating from the mid 2000’s, looking much the same as they do now.  Their main fare is beef organs, which I consider to the quintessential Macau street meat, on par with hot dogs and sausages in the West. 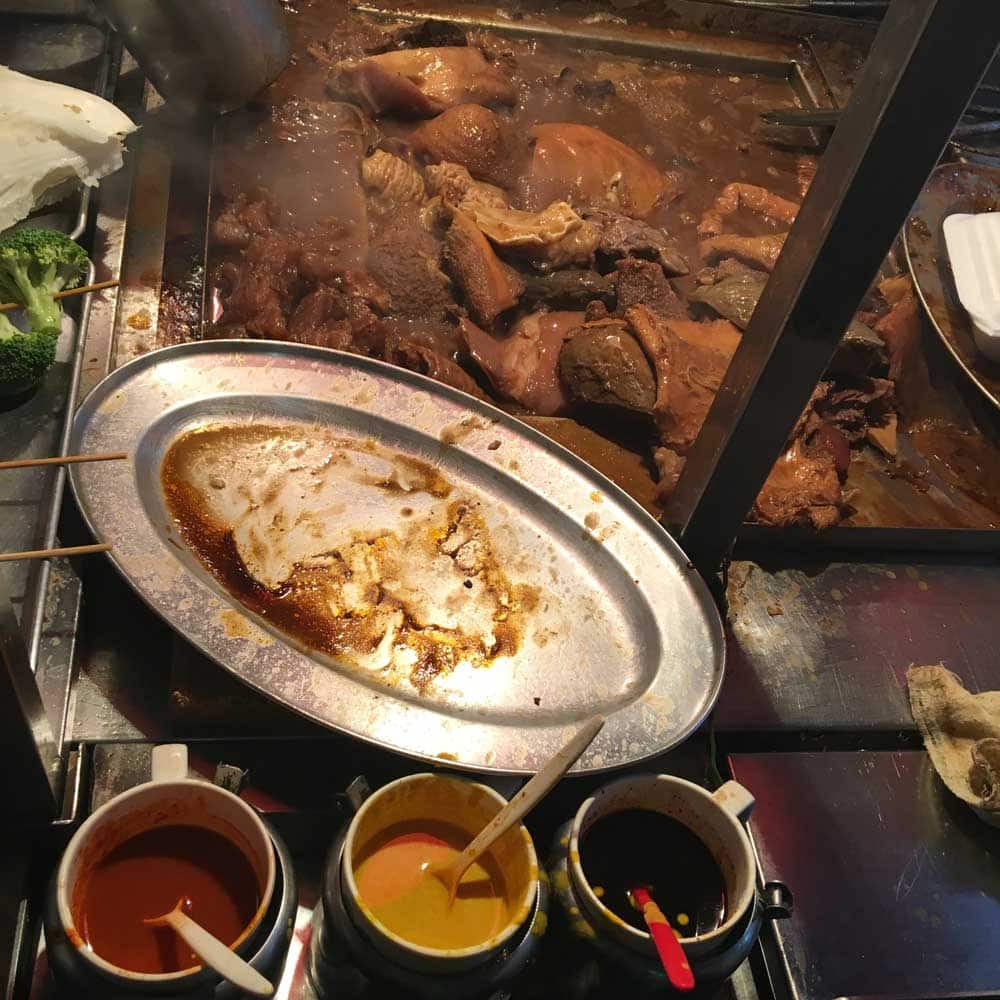 While beef organs certainly sound scary, they do them in a way where the organ taste isn’t so apparent, which is why it works for me.  My friend and I added octopus, oysters, clams and Chinese cabbage conch to ours and then had a merry feast inside the San Va.  Another thing worth trying is the chicken leg which I really enjoyed as well.

Two issues to keep in mind here: communication may be a problem as well as the price.  A lot more expensive than I thought, everything cost $100 in total, which certainly isn’t cheap.  Judging by how popular the stall is though, with a line that sometimes snakes around the corner, the locals definitely don’t seem to mind.

Apologies for the picture looking as it does, but I don’t know how anyone can take a shot of that mess and make it look good.  It’s definitely not the kind of food to take home and show Mom.

I’m not sure if dumplings actually qualify as street food, but what the hell, it’s my list and we’re going with it.

The pork and cabbage dumplings at Peking Dumplings are too good not to mention anyway, and I’ve been enjoying them for the better part of 7 years now.

Small orders of 12 run $24 and should be enough for most people, or you can order a little more and try a set meal instead.

I think the best laksa in town is found on the Broadway Food Street, which I included in my list of 10 Can’t Miss Dishes.  As undoubtedly great as it is, it’s a little bit out of the way and a touch expensive ($78), which elevates it beyond the realm of simple street food.  For a more accessible alternative, try the pork or chicken laksa at Sio Hong Mao (Little Panda) on Travessa da Se, the same street as Lou Kau Mansion. 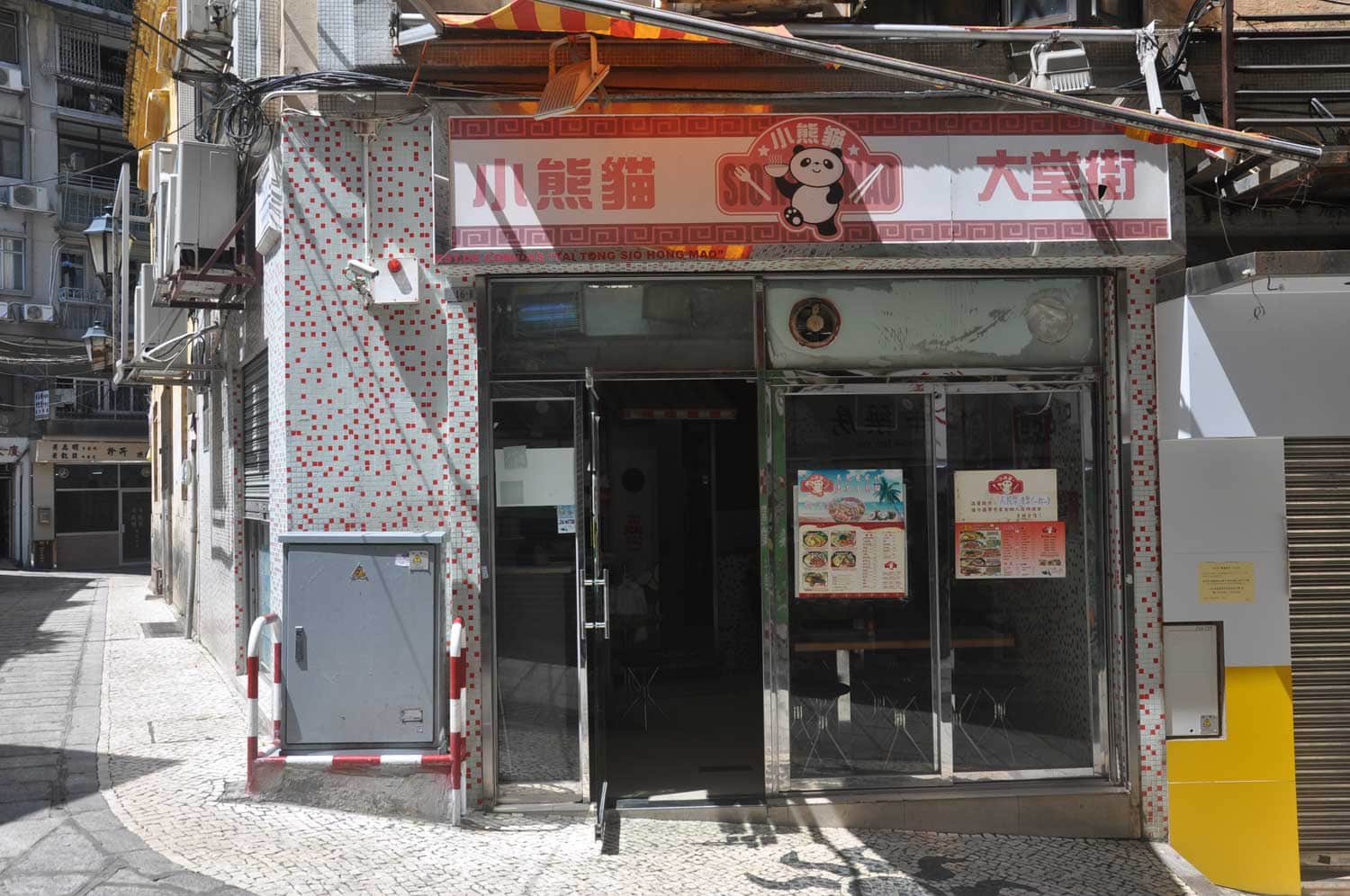 Prepared in a Cantonese style, it’s not as heavy on the coconut or spice as some laksa, but it’s still a tasty bowl of soup with beautiful ingredients that works.

I like the pork one best, followed by chicken, both of which cost $32, and come with one free drink.  (If you want to upgrade to a cola, it’s $5 more.)  The pork chop and spicy fish laksa ($38) also comes highly recommended.

Macau Street Food: The Man With the Purple Hair

One street east of Rua do Campo there’s a large food market called Mercado Municipal that’s been around since 1939.   Along one side of the market on Rua de Horta e Costa are a number of stalls selling various street food, with my personal favourite the one run by this man.  I think he’s worth visiting just for his purple hair alone, which was done in Shenzhen for $200, and will never fade.  A native of Hong Kong, he told us he’s well known on the Internet and lots of people come from all over the world just to try his street food.

I’d like to recommend his Chang Fen (肠粉), which is quite similar to another food on this list, the Pig’s Guts Noodles.  The inside is full of dried shrimp and served with a peanut sauce that tastes really good with the sesame, a fine choice for only $17.  The Shao Mai (烧麦) is another winner, fish meat mixed together with vegetables served in a ball similar to a wonton, but with harder skin.  Made with no preservatives or MSG, it’s really good value for only $3 each.

Fans of radishes will also enjoy the mian fen (面粉), a traditional type of Cantonese food, for $7.

Whether through sorcery, magic or just plain only mischief and mayhem, it tasted exactly like a radish, even though it’s made of flour, and I have no idea how that’s even possible.

Right beside the Three Lamps traffic circle, there’s a pedestrian only street named Run de Fernao Mendes Pinto that has a bunch of stalls selling various street food.  I like the first one on the left hand side, for their chicken soup ($10 to $17) and cold sweet soup ($12). 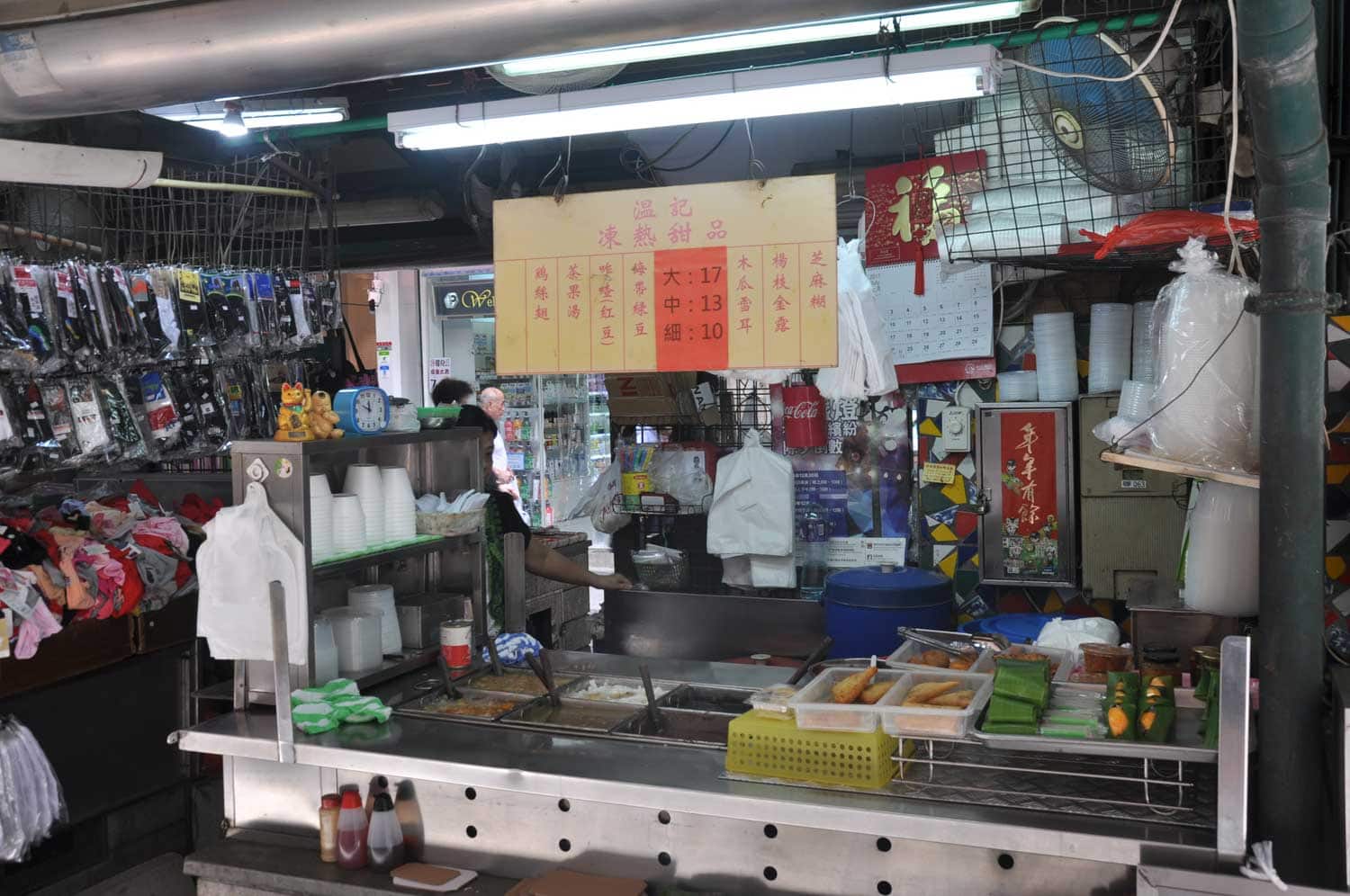 For decades, the chicken soup would have been shark’s fin soup, but they got their act together a few years ago and started using chicken instead.  Available in three sizes: small ($10), medium ($13) and large ($17), I defy you to find better soup in town for the price.  Laden with thin strips of chicken and rocking a smooth pleasant texture, I could eat it everyday.

The sweet soup ($12) is another winner and the closest thing to a dessert on this list.

Although I’m not 100% sure, I think it’s a mix of mango and pomelo, perfect for Macau’s sweltering summer days.

Here are a couple of dishes that I wouldn’t touch with a ten foot pole.

Curry Fishballs are almost absolutely adored by mainland visitors and one of Macau’s most dominant street foods.  The only problem is that I have no idea why. 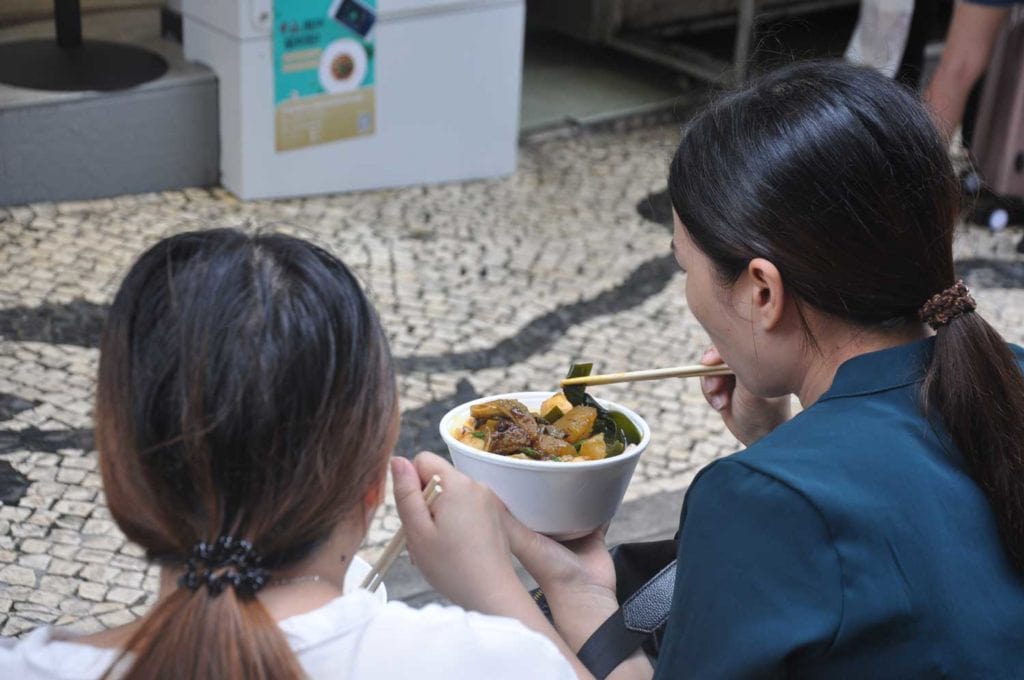 Perhaps a little strange to Westerners, I find the whole dish boring and bland, as pedestrian as it is pointless.

The gist is that vegetables and various fish balls are boiled and then served together in a curry sauce, which you then pick out of the bowl with a sharp chopstick.

Extremely expensive ($75) for what you get, I prefer food with taste that fills me up, not frivolous filler that goes nowhere.

Pig Knuckles with Ginger is another popular Macau street food that I’m not into.  Far too rich and heavy for my liking, it goes way overboard on the vinegar, so much so that’s all you can taste.  Overbearingly oily and strong, perhaps the idea is to share it with three or four people, because after one or two bites you’ll definitely have had enough.

The only thing I liked about the dish was the cute woman who served it. 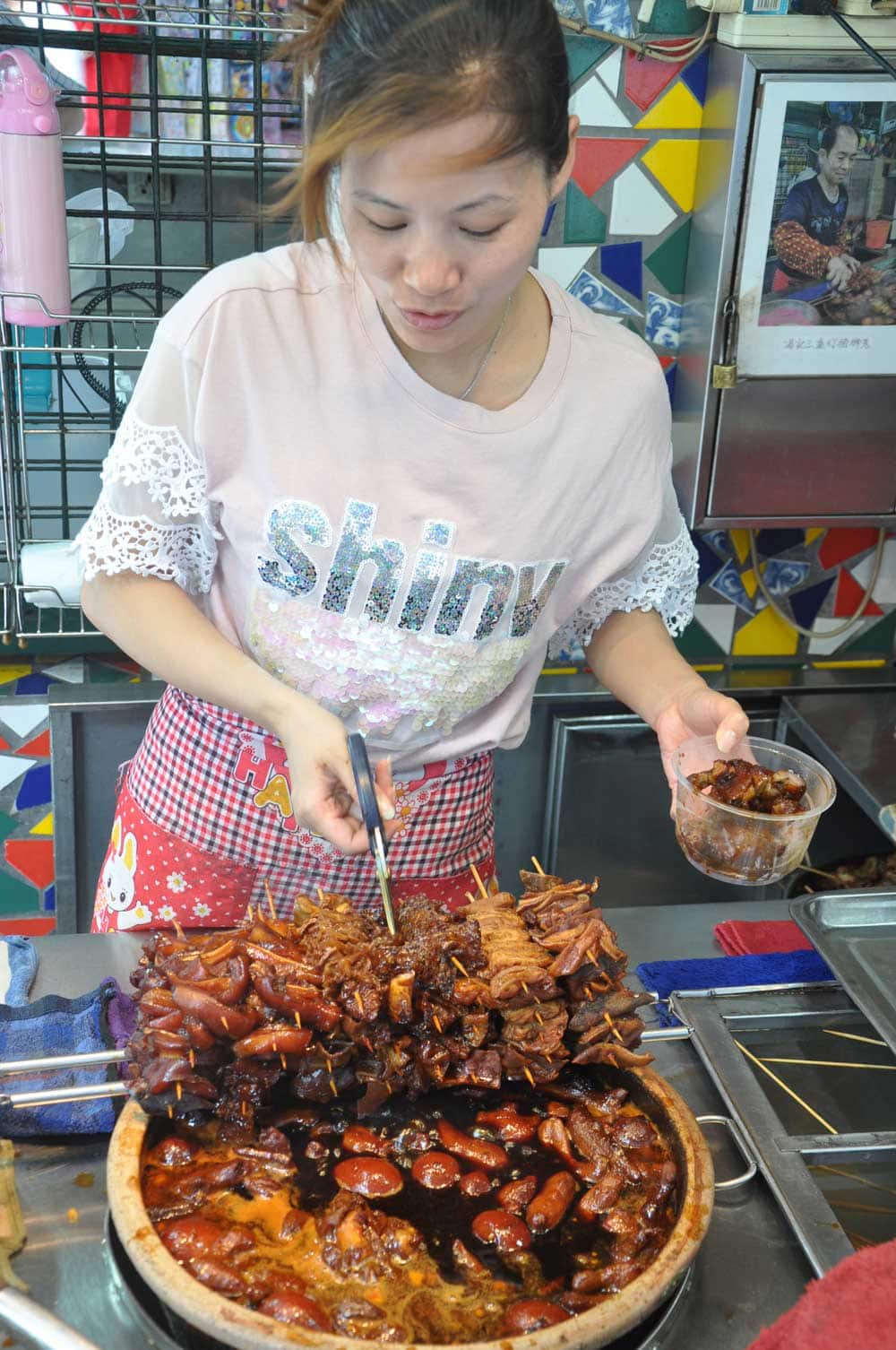 Her stall is close to the Three Lamps traffic circle, opposite the one selling Chicken Soup above.