Most of my biggest letdowns in Macau (outside of the Craps table of course, and/or some wicked combination of fast women and slow horses) have revolved around dining experiences in expensive high end restaurants.  More than a few times, I’ve bought the hype hook, line and sinker, sauntering in with money to burn only to walk out later two hours later destitute and half delirious, repeating to myself, I haven’t felt pain like that since prison, I haven’t felt pain like that since prison.

(Honestly, with some of these places, it’s a total con job, how reputation gets built up and accolades earned.  They write their own press clippings and reviews half of the time.)

In a city built on risk and reward, on spin jobs and suckers, where fortunes are won and lost on the roll of a die, even dining out can be a serious hazard, especially when the Michelin stars come out early at night.

Fortunately there’s an easy way to navigate the peril, and that’s to hit the streets!  Some of the most famous restaurants in Macau can’t hold a candle to what’s sold in simple stalls, carts and markets, at a fraction of the cost.  Besides that, rolling up your sleeves and doing it like the locals do is one reason traveling can be so fun, and considering most of it costs less than $5 US dollars, you can’t go wrong giving it a go.

Three rules before we begin:

1. No desserts make the list because I want to focus on dishes that could be considered proper meals.  Besides that, I’ve already got a good snack section that your sweet tooth is sure to love: Local Snacks.

3. The street food is so popular and widespread that I’m obligated to mention it, and I’ll include those at the end.

We have to start here because pork chop buns might be the most classic of all Macau street foods, widely available in many restaurants, tea houses and bakeries.  The industry leader is Tai Lei Loi Kei, but their pork chop buns are a total disgrace, not to mention wickedly overpriced ($45).  If you want to wait in a line for something that tastes disgusting, dry, and half dead, be my guest, but there are much better options out there.

To that end, I’d like to recommend 新鴻發咖啡美食, a small neighbourhood cafe located near Lou Lim Ieoc Park that’s been open for over 20 years.  It’s so local it doesn’t even have an English name, but it’s still easy to find, right on the corner of Rua do Almirante Costa Cabral and Aldofo Loureiro, across the road from the Ye Ting Residence. 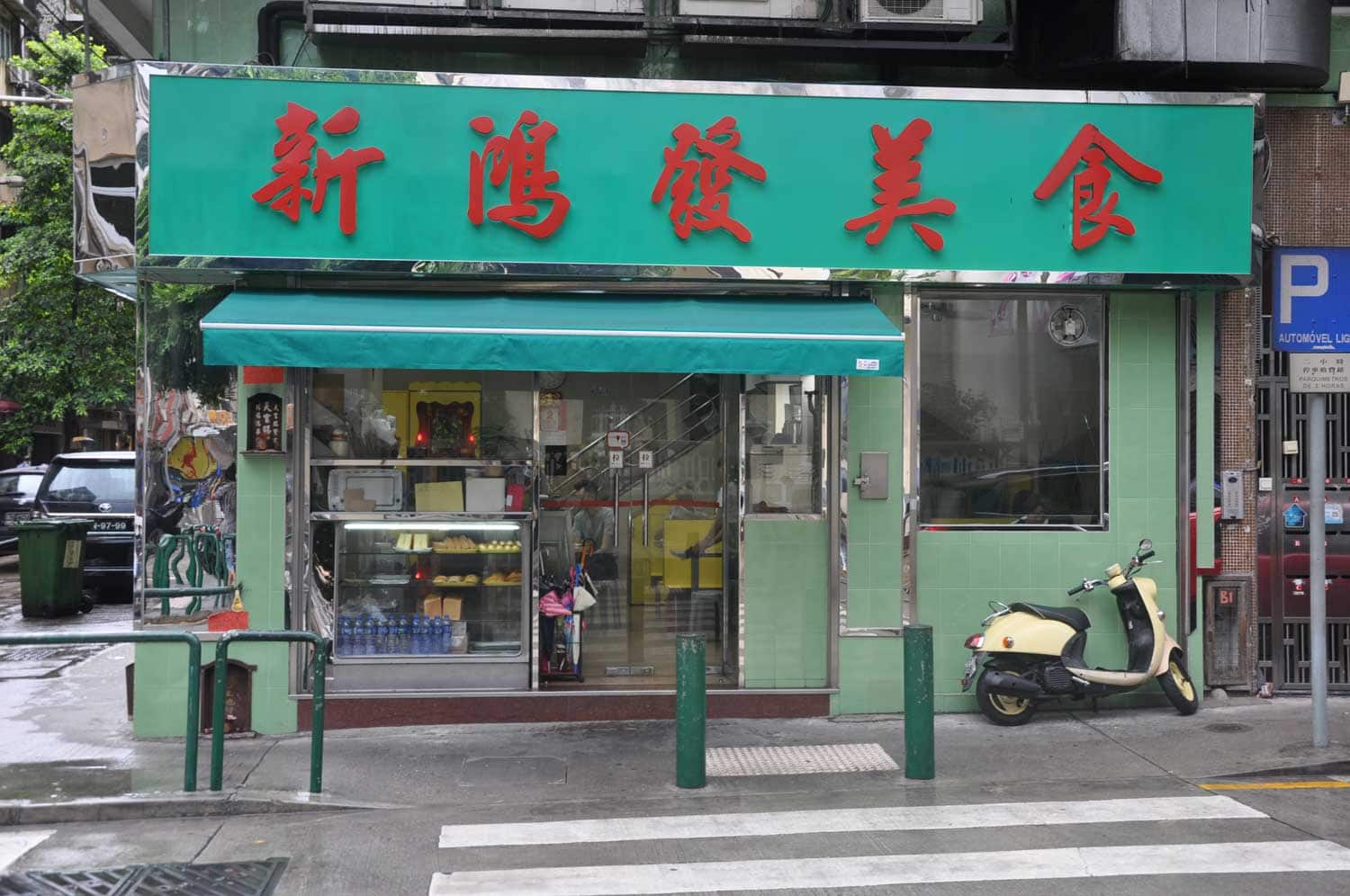 Their Pork Chop Bun is served on a crispier bun and they don’t skimp on the meat, a really good choice for only $23.

When ordering pork chop buns, you sometimes need to choose between Bun (面包), Toast (多士) and Sandwich (三明治).  As the names indicate, a bun is a bun, while toast is toasted bread without crust, and sandwich is bread that hasn’t been toasted, again missing crust.

For best results, I’d just stuck with the bun in most cases.

Pork Chop Buns might get all the press, but I’m a much bigger fan of Macau’s less heralded Chicken Bun, especially the one sold at Lam Kei on the Lane of Angels, Travessa dos Anjos.  (That’s the handy little road that links Rua do Campo with Rua de Pedro Nolasco da Silva.)

Served in a soft bun, it’s both salty and seductive in a greasy succulent way, amazing value for only $28. 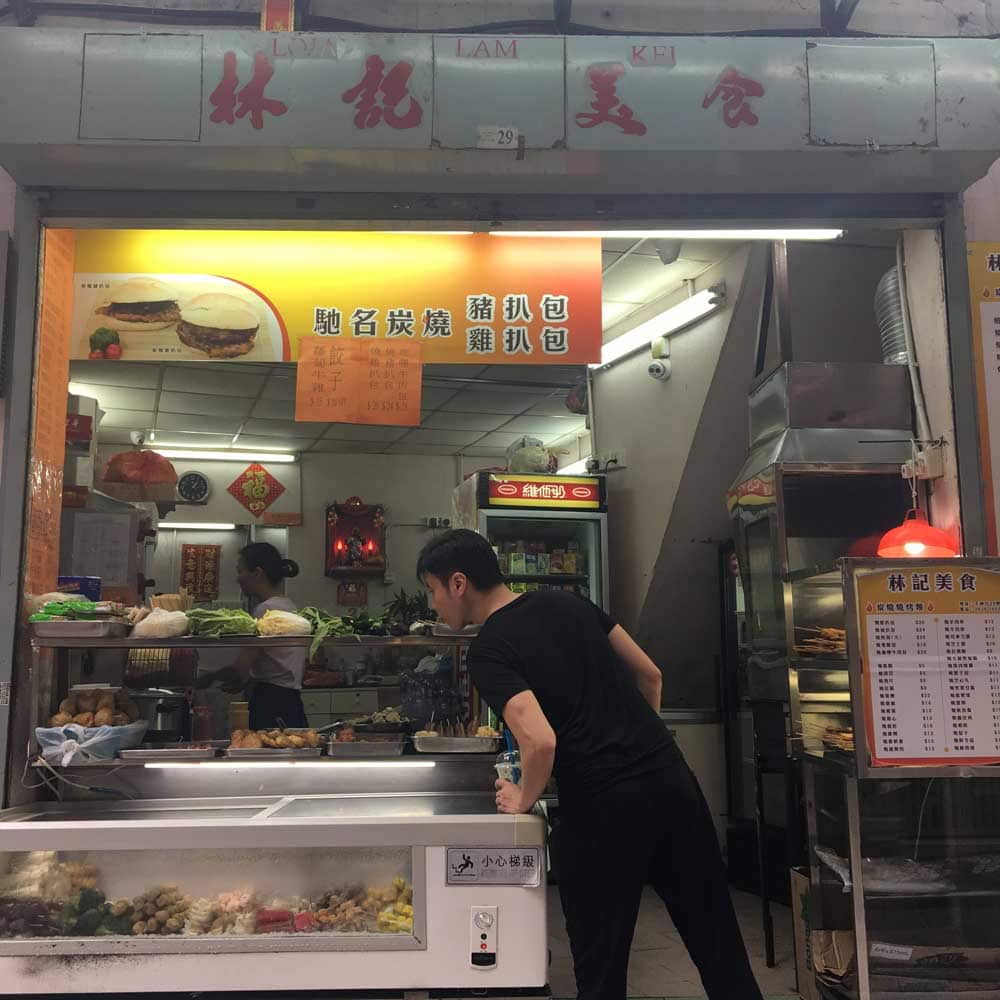 Don’t expect too much service when you order; the ladies there won’t smile and they don’t care, but a Chicken Bun (鸡肉包) this good is worth the indifference.

And just to prove that we are in Asia, Macau also serves up a strangely good Beef Tongue Bun at Sai Van On Kei, a small restaurant opposite Lou Kau Mansion that’s been in business since 1954.

Costing only $19, it’s served in something of a soft baguette, and actually tastes a lot like normal beef, just a lot more mushy and tender, similar to a paste.  If you can get past the fact that it’s a cow’s tongue, then you should enjoy it a lot. 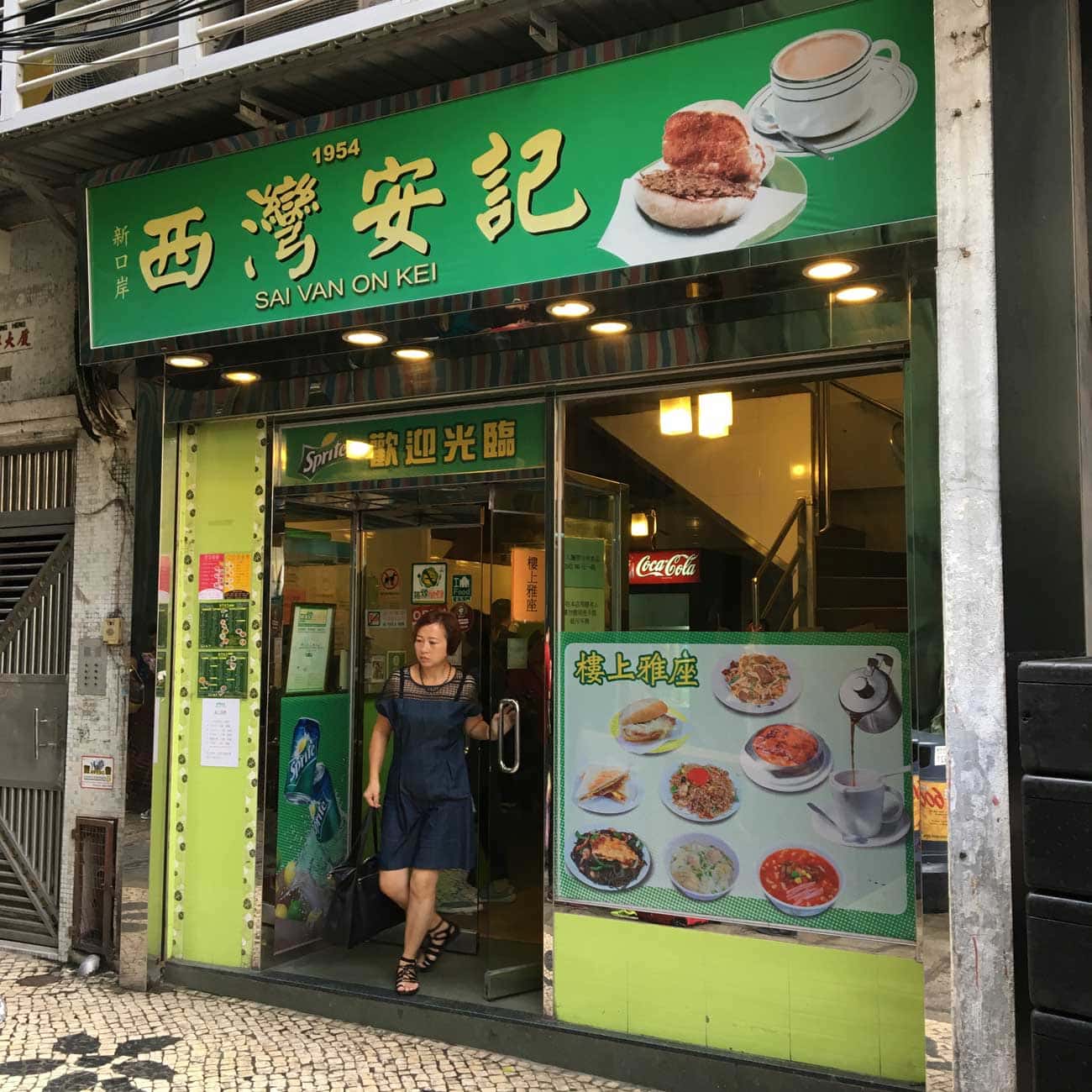 Another dish I’d like to recommend at Sai Van On Kei is the fried beef macaroni for $41, a special item that’s not included on the menu, but is available if you ask.

Between Senado Square and St. Paul’s, there’s a little road that winds upward named Rua do Monte, home to the very small Dai Gwan, which features no inside seating.  It seems to live off one snack only –  the Taiwanese Pepper Meat Bun – which Michelin also digs to some extent, judging from the signs on the restaurant.

A tasty treat served in a crispy sesame seed bun, the inside is a mix of pork, green onions and pepper sauce.  Costing only $18, it’s well worth trying. 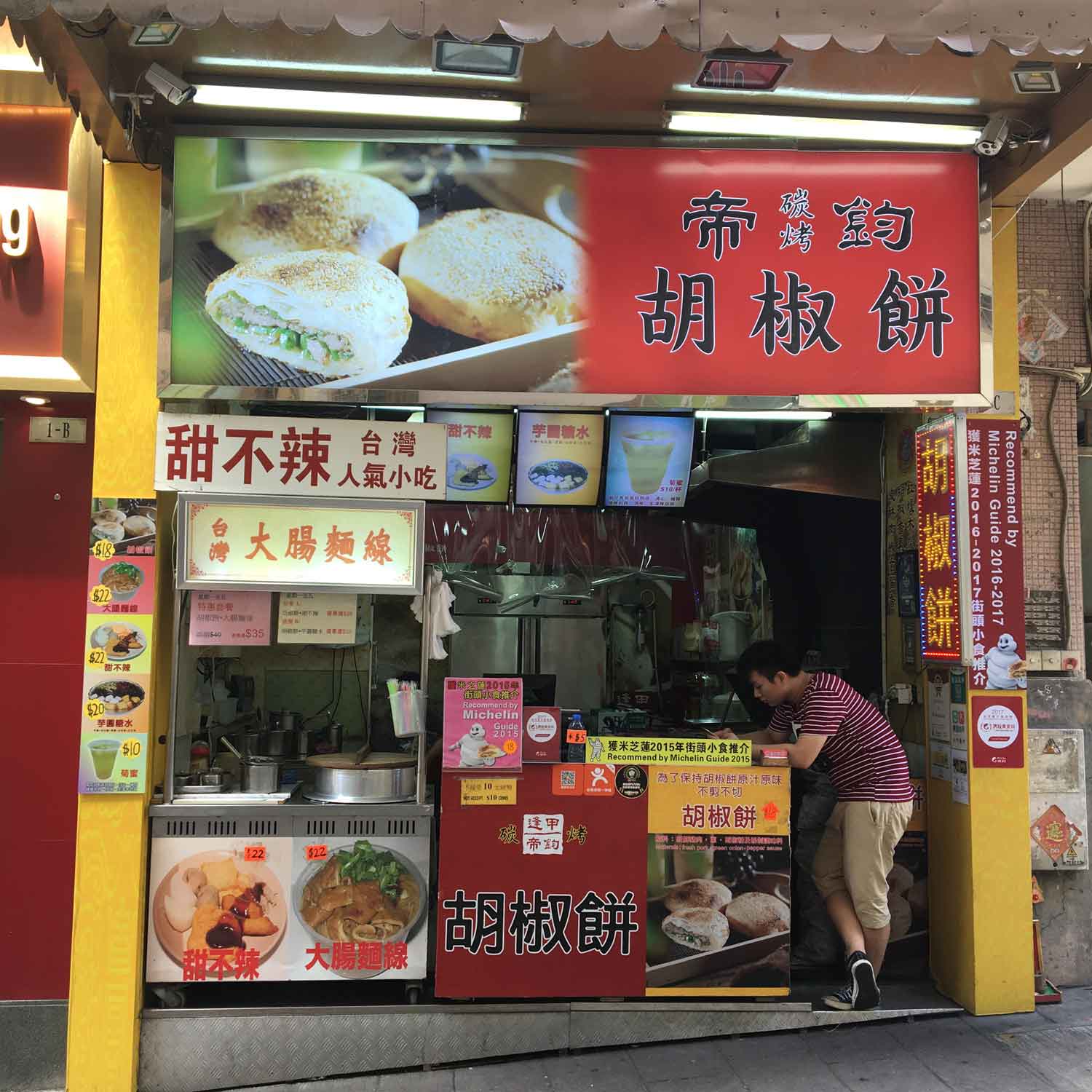 Totally unknown to tourists, I’m very happy to introduce it here, because it’s a sneaky good option for budget travellers or those out to try authentic local food. 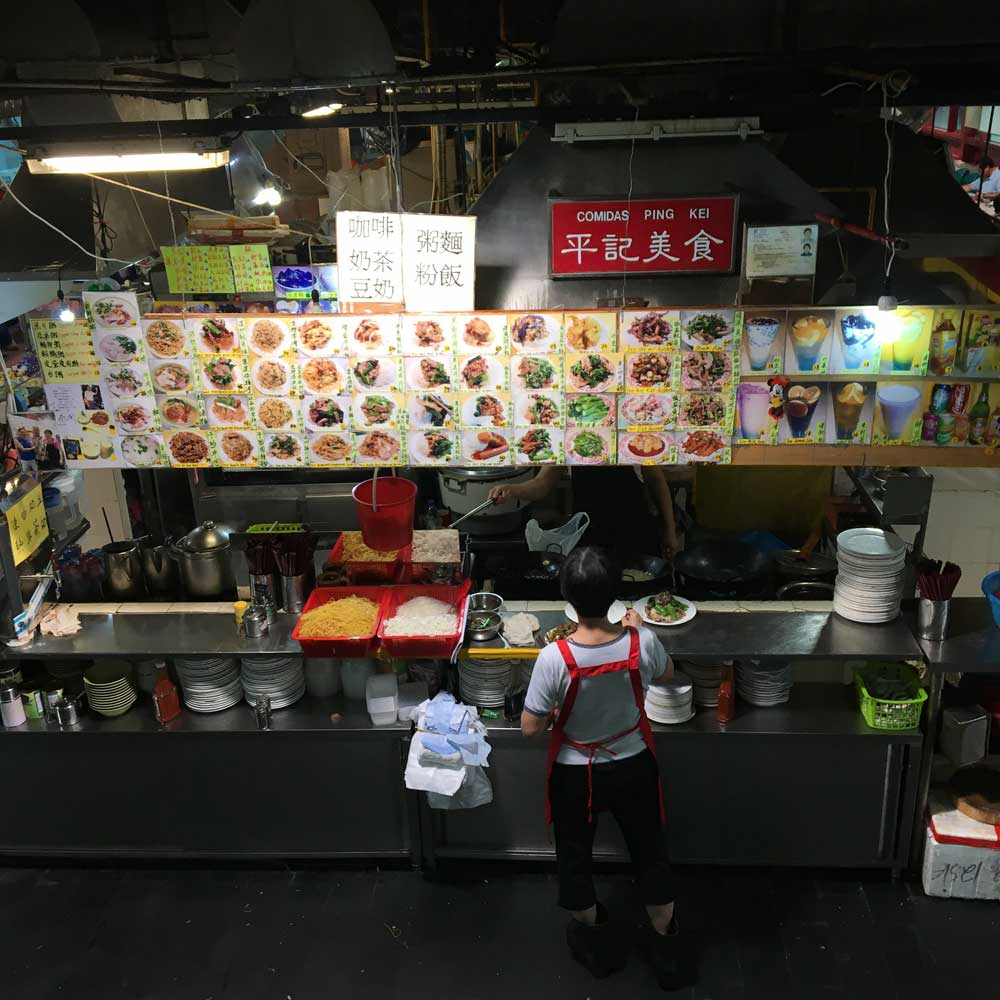 As for the various stalls, I think Ping Kei sells the best stuff, with their fish eggplant rice ($44) and wet fried beef noodles ($45) worthy of special praise.

When I first got the fish eggplant rice, I wondered where the seafood was, but it was there in the form of a dried paste that was fried together with the eggplant.  It made the eggplant taste somewhat like fish, a pairing that worked surprisingly well, especially when mixed together with rice.

The wet fried beef noodles were amazing as well, so much so that I almost included them as a core dish in my Cantonese Food Guide.

Another stall to try is 珍记美食 for their spicy sardine soup (辣鱼通心粉), which costs $24. 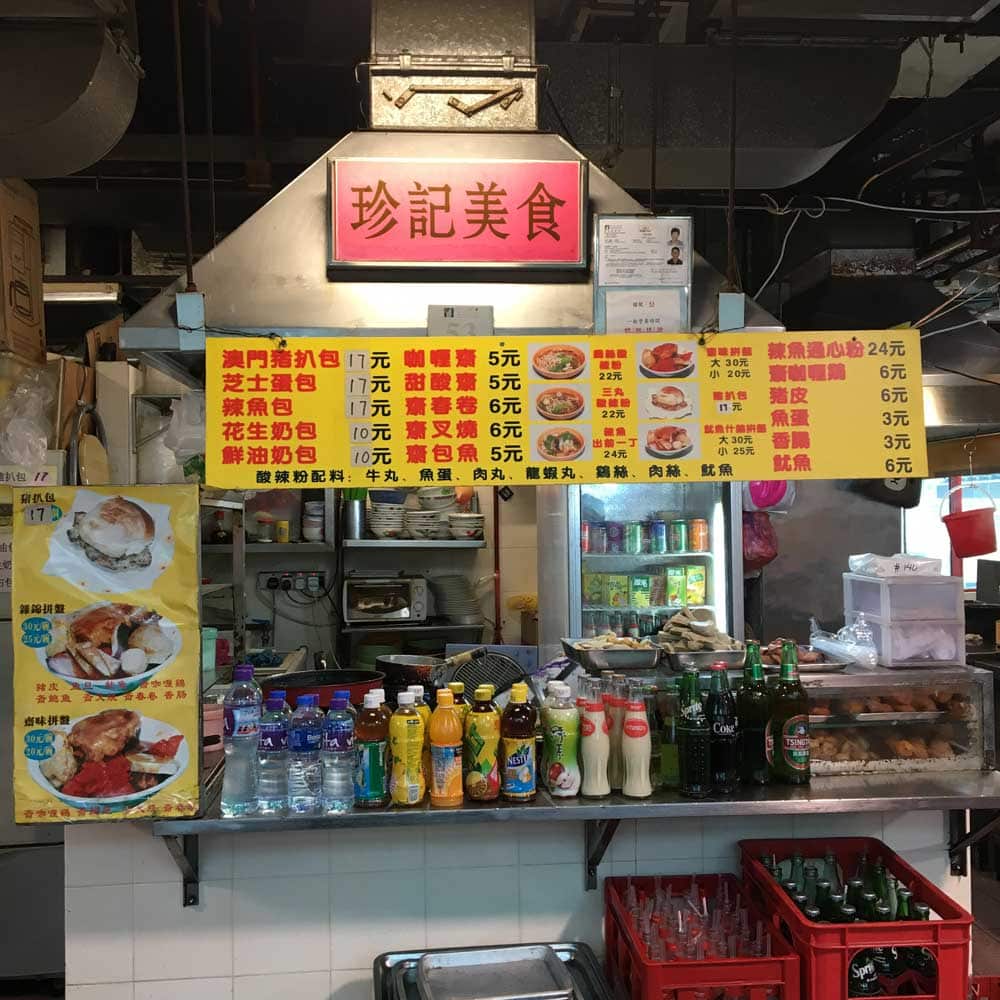 Wonderfully executed, they add just the right amount of seasoning and spice to balance the somewhat fishy soup and sardines with the macaroni.

Discounting texture, appearance, and the fact that they were served in a food court (gasp!), these three dishes taste as good as anything I’ve had off a Michelin menu.

Pig’s Guts Noodles probably sound like the last thing anyone would ever want to try, but the truth is they’re actually not pig’s guts at all.   Rather, they’re a kind of steamed roll filled with meat, seafood or vegetables, and sometimes topped with sesame seeds.

An extremely popular snack food (dim sum) in Southern China, I’m a big fan of the dish, especially the pork and seafood ones made at Hoi On San Sek, close to Camoes Park. 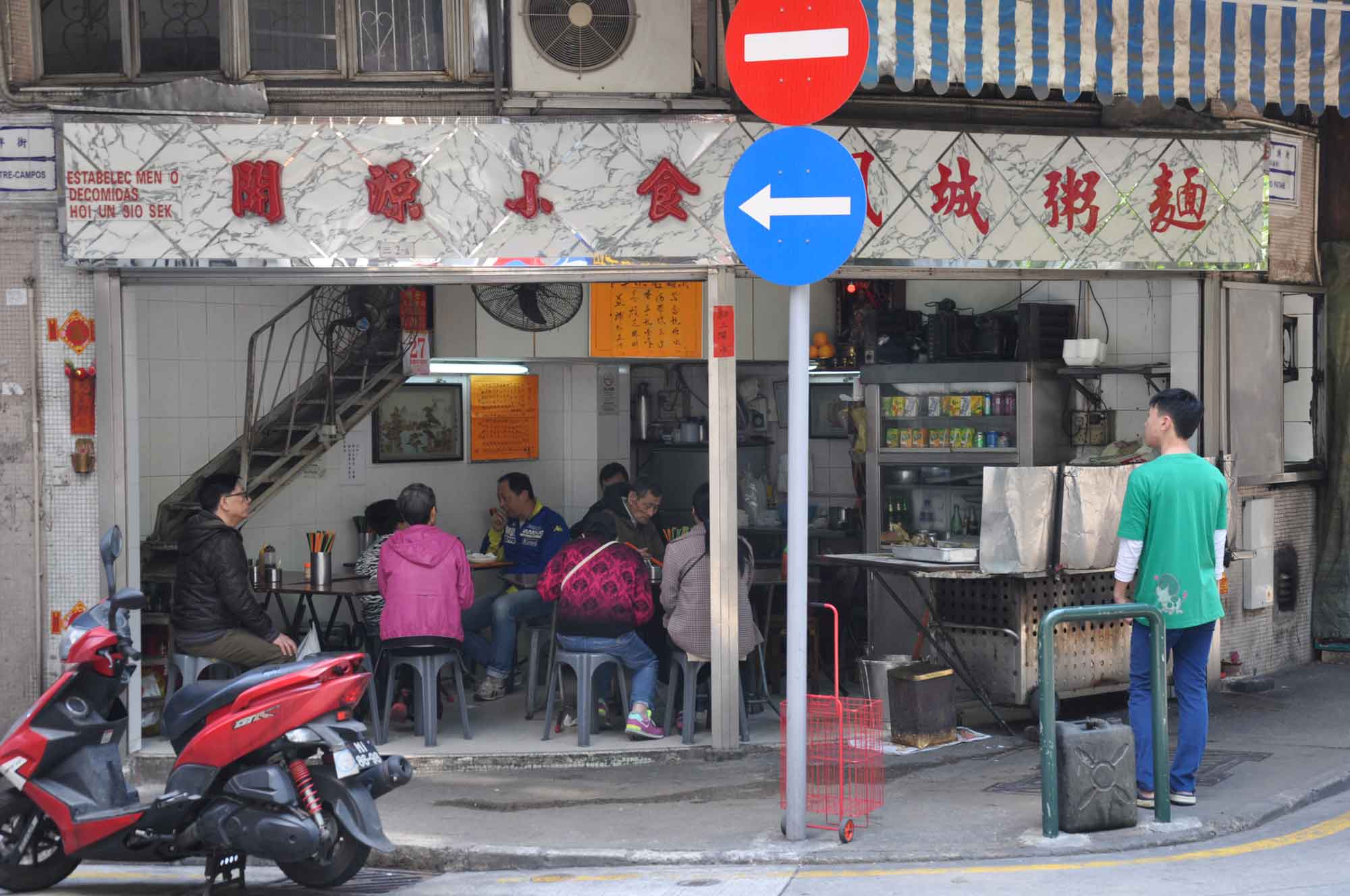 Get there before noon if you want to order any, as they sometimes sell out around lunchtime.  And with the price only $12 for three rolls, it’s no wonder they’re so popular. 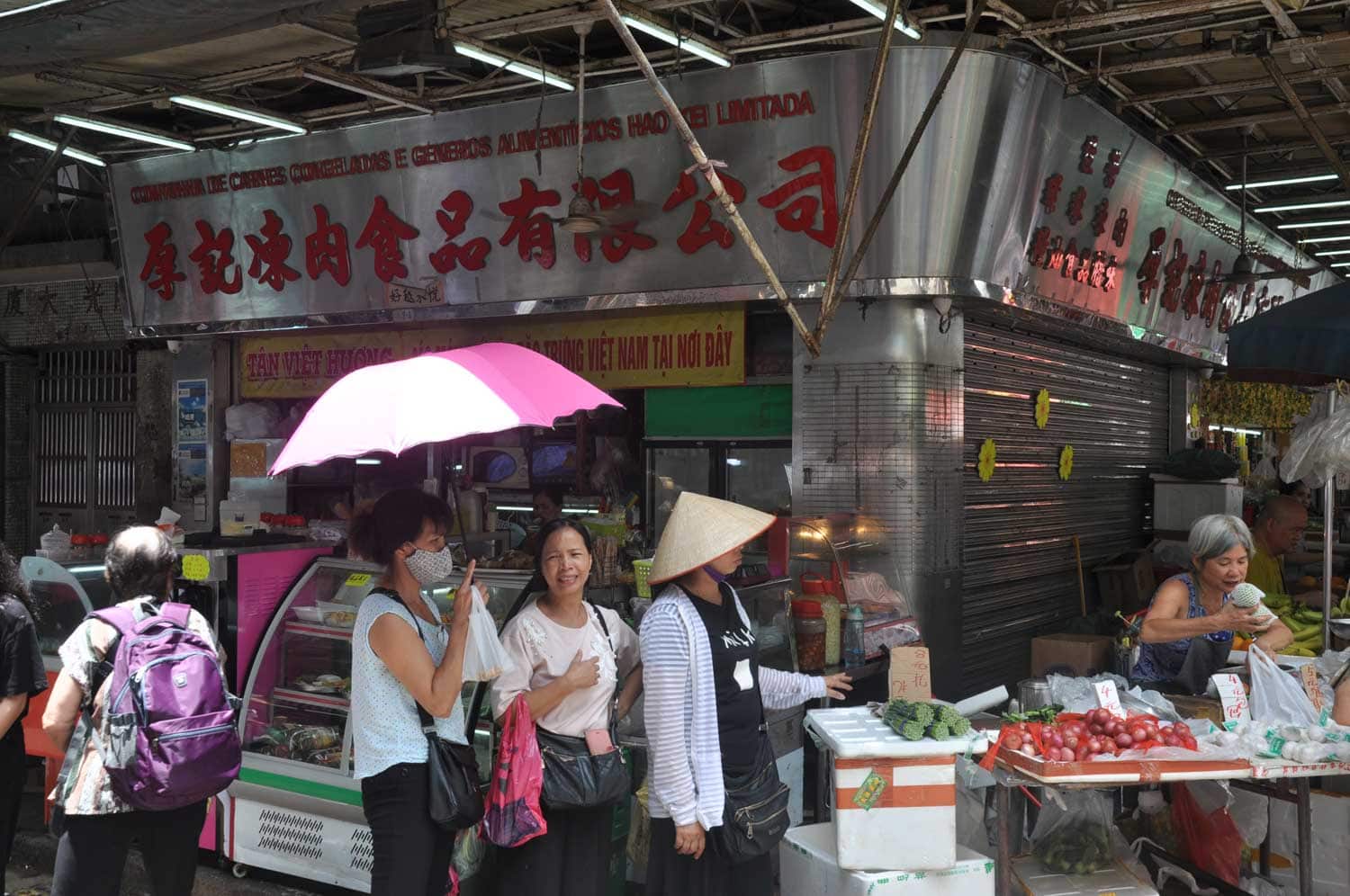 You might not know it to look at the picture, but that little bowl of Vietnamese fish noodles packs quite a punch.  A motley mix of seafood, noodles, and vegetables, it’s seasoned with a dry shrimp sauce that lifts the dish into another stratosphere.  A little salty, a little sour and a massive workout for your taste buds, it’s a personal favourite of mine and something you should seek out if you’re around the Three Lamps District.

Afterwards you can eat it inside the small shop that doubles as a convenience store, right beside the diapers and detergent, and feel like you live right around the corner. 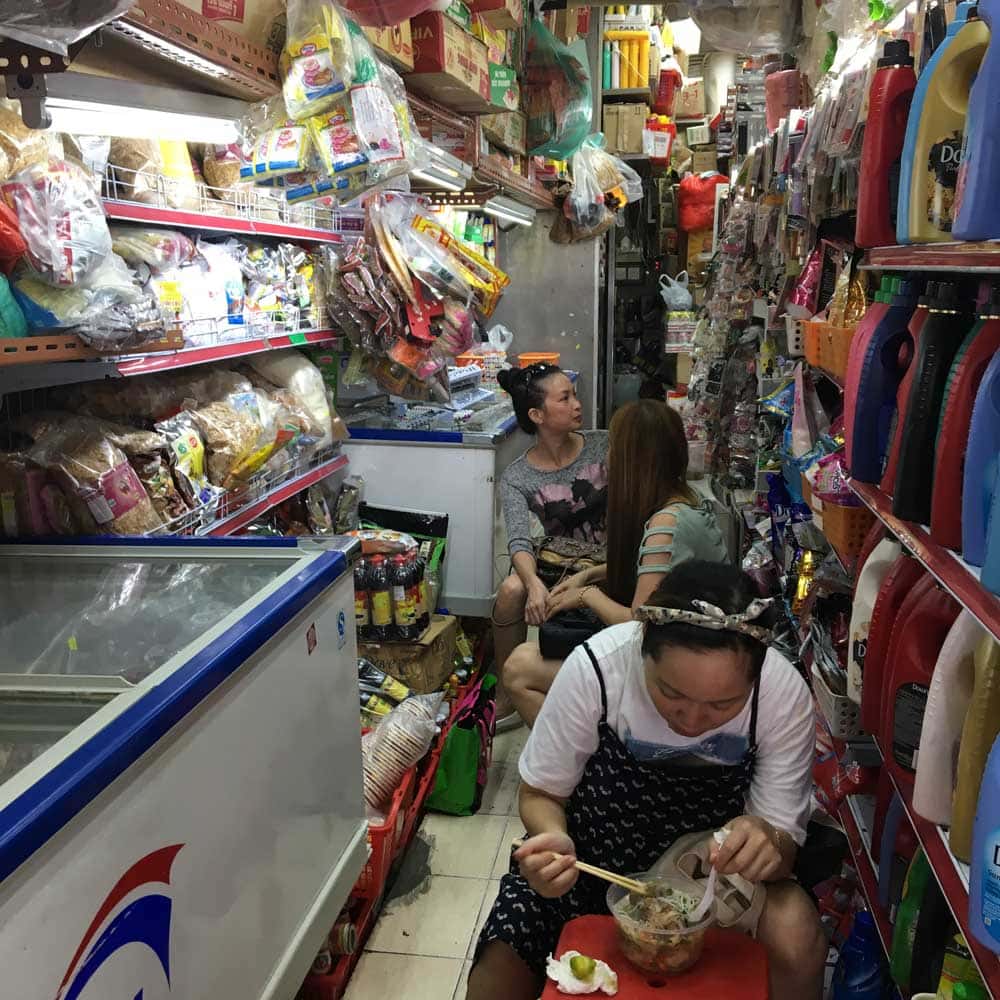