Full disclaimer right away – I haven’t stayed in every single hotel in Macau, but I’ve been in enough of them to help you choose the right one.  The most difficult decision is deciding where to stay on the history laden Peninsula; Taipa and Coloane are much more straightforward in comparison.

I’ve been staying in Macau hotels for the better part of 10 years now.  With the current state of Macau rents, and the fact that AirBnb hasn’t caught on yet, I imagine I’ll be staying in them for the next decade as well.  Whenever I consider places to stay on the old peninsula, I follow these general guidelines to make my decision.

The first thing you need to understand is that there is no really good cheap accommodation in Macau.  By cheap, I mean $300 Mops or less per night.  The best place to stay in this price range is the San Va, on the Street of Happiness, where rooms go for $220 Sunday to Thursday and $320 on Friday and Saturday.

Despite its obvious shortcomings, the San Va is clean, convenient and not a brothel, so that alone does it for me.  While some of their counterparts in the area might be $20 to $40 MOP cheaper, I wouldn’t trust leaving my belongings there during the day nor sleeping in their beds at night.  That pretty much makes the San Va the best choice of a bad lot, but at least it’s safe and reliable. 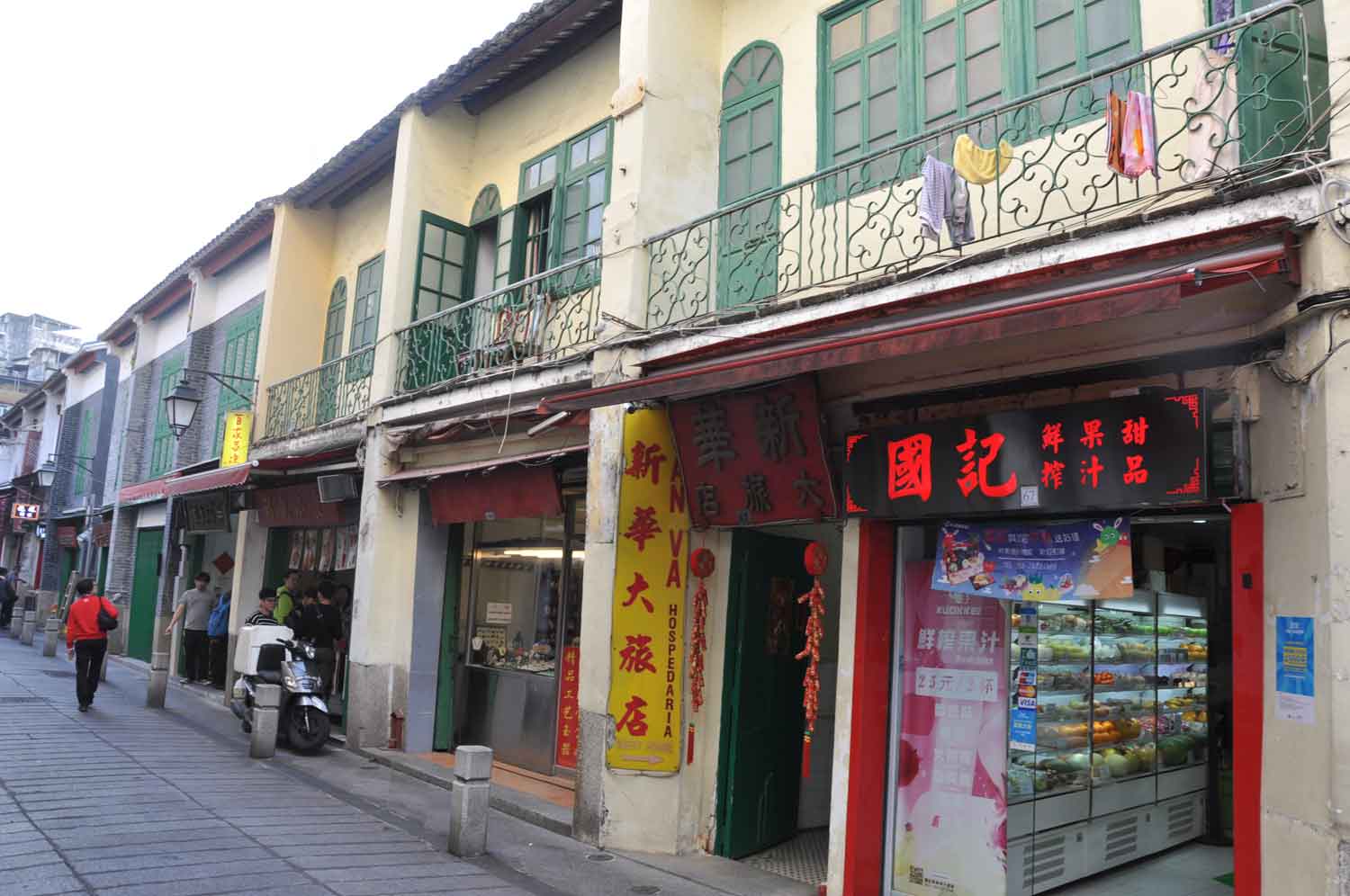 For more information about the San Va, please follow the link to Trip Report III.

If you’ve found your hotel, congratulations!  If not, let’s keep moving on.

Go Budget Plus, My Friends

Okay, so the San Va isn’t for you.  It’s not for a lot of people, including me, during the summer.  When Macau nights are rocking 30 degrees plus, being in that little room with that little fan is the last place I want to be.  So in order to move up to something more comfortable, the next step is to explore the $300 to $600 price range, and I’ve got some excellent news for you.

During the course of writing the Budget Accommodation Guide in late 2019, I stayed in 28 smaller, less well-known hotels, most of which were concentrated near San Ma Lo and the Inner Harbour. Much to my surprise, I learned that the best of these hotels were not only far superior to the shabby San Va, but just as good as hotels in $600 to $1000 range, which we’ll be coming to soon.

If you still don’t like what you see though, remember to hurry back!

If you’re still with me now, perhaps it’s because you’d like to celebrate a special occasion, or just want more space, style and comfort.  To that end, Macau has a number of consistently good hotels that cost between $600 and $1000. Three of my personal favourites are the Pousada de Mong Ha, Hotel Royal and Hotel Sintra.

Pousada de Mong Ha has the most character of these hotels and probably the one I’d push for first.  The only downside is that it’s located halfway up a hill on the northern part of the Peninsula, close to the Border Gate.  Apart from that, it rocks real Portuguese style, the staff is great, breakfast is free and it’s an exceedingly interesting place to stay.  For more information and pictures, please follow the link to Trip Report I.

The Royal and Sintra, comparatively, have much better locations and are two fine options in themselves.  Safe, comfortable, clean and quiet, I’ve stayed at both places many times and never had a bad experience.

To learn more about the Sintra and Royal, please check out Trip Report III and the 2014 Grand Prix Race.

Other hotels in this price range to consider are the New Orient Landmark, Sofitel, Grand Lapa, and Lisboa, each of which has its own unique selling point and charm.

On the flip side, hotels in this price bracket to avoid are the Beverly Plaza, Metropole and Emperor.  It’s not that they’re unlivable or anything, just inferior options to ones already mentioned above, so there’s no point in considering them.

Okay, so you want a better place to stay and you want to spend money.  No problem, Macau has plenty of options in the $1000 to $1600 range.  At this price point, Starworld, L’Arc, and the Sands Macao definitely open up to you, along with MGM Macau too, depending on the time of year and whether you can get a deal.

Without question, these hotels are all better than the likes of the Royal, Sintra, Lisboa and Sofitel. They’re larger, more comfortable and have better service and amenities, but are they necessarily better value?  That’s ultimately for you to decide, but I don’t think so.

Drawing a parallel to wine if I may, let’s take an example of a very good bottle of wine for $50 that might rate as a 92, versus a $100 wine that’s a 95.  While the $100 wine is better, it’s nowhere near twice as good, and I think the same point applies when comparing these hotels.

The Sands costs twice as much as Pousada de Mong Ha, but it is definitely not two times better.  L’Arc and Starworld both have big beautiful rooms, but are they so much better than what you get at the Sintra or Royal that it’s worth paying double for?  In my opinion, that answer is no, but again, it all comes down to personal preference, how much you want to spend and what conditions you can handle.

Which leads us to our last two contenders.

The battle for the best hotel on the old Peninsula currently comes down to the Grand Lisboa and Wynn Macau.

The Wynn, on the other hand, is far classier, has larger and more stylish rooms, better shopping, spas and gyms, and the bigger brand name to boot, which often goes a long way in this industry.

In my opinion, paying $2000 to stay at the Wynn doesn’t make much sense when you can live at the Grand Lisboa for $1400, but perhaps we just value different things.

So long review short, here are some general guidelines to follow when choosing hotels on the Macau Peninsula.

Still not getting what you want on the Peninsula?  Then move on to learn about staying in Taipa and Coloane!

It’s probably true that hotels in Taipa have ceased becoming viable living options ever since rates on the Cotai Strip plummeted.  Three or four years ago I thought that Grandview and Grand Dragon were good cost effective bases to explore both Macau and the Cotai Strip from, but they’ve become rather redundant now that rooms at Broadway, Countdown and the Sheraton are often available for around $750 to $850 per night on weekdays.

The biggest problem, of course, is that outside of Taipa Village, there isn’t much to do or see in Taipa.  Strictly a residential area, it’s the suburban block, home to street after street of high-rise apartment buildings.  With very little sightseeing available, you’ll definitely be spending most of your time either on the Peninsula or the Cotai Strip, so staying in one of those places obviously makes a lot more sense.

Two exceptions do exist however, and they are Altira Macau ($1300 per night) and the Regency Art Hotel ($600 per night).

Rooms at Altira aren’t that far off what you get at the Ritz-Carlton Macau and they’re a third of the price, while the Regency has fantastic spa facilities and one of the best outdoor pools in town.

I must stress however that both only make sense for travelers who just want to relax in the hotel all day, rather than being out and about.

The last place we need to talk about, accommodation-wise, is Coloane.

There are two budget hostels in Coloane and two beach resort hotels, the Pousada de Coloane and the Grand Coloane Resort.  The budget hostels are weird entities, available only to students or people who hold International Youth Cards or International Youth Hostel Cards.  Registration and check in procedures look complicated and maybe not even worth the trouble, considering how isolated both hostels are.  For more information, please follow the link to the Macau Government webpage: Regulations of the Youth Hostels of the Education and Youth Affairs Bureau.

As for the two beach resorts, they’re both personal favourites of mine, but are really only in play from May to mid December, before the weather gets too cold.

The Grand Coloane Resort is much more comprehensive than Pousada de Coloane, so it’s probably the preferable option, although the latter definitely has its own charm, being smaller, far less busy and more romantic.

For more information about Pousada de Coloane, please follow the link to Trip Report II.  To learn more about the Grand Coloane Resort, please check out the 2014 Grand Prix Race.

Much like Altira and the Regency Art Hotel, both hotels only suit tourists who have no interest in sightseeing and just want a resort type of experience.  If you intend to visit most of Macau’s top sites, then you should probably be staying on the old Peninsula first and the Cotai Strip second.

For more information about Budget Accommodation in Macau, just follow the link below!