After lunch I walked down to the Grande Praca to check out MGM’s newest addition, the Art Space.

MGM Art Space opened on December 20, 2013 with massive fanfare and a top notch exhibition: Botticelli’s Venus, The Life and Times of a Goddess.  Featuring 56 paintings in all (22 of which were done by Botticelli), it was a fantastic array of Renaissance art, one that you rarely get to see living in Asia.  Truth be told, all but one of the paintings were in fact replicas but that didn’t take anything away from the overall experience.  Redone in high resolution and scaled to original size, everything on display certainly looked real enough.

The star of the exhibition, Sandro Botticelli, was born in Florence in 1445.  He first trained to be a goldsmith when he was 14 before switching to painting.  In 1481, the Pope asked him to paint a wall in the Sistine Chapel and later he helped decide where David’s Michelangelo would be placed in Florence.  Viewed as a major artist today, Botticelli was basically unknown for 400 years, only garnering recognition and acclaim in the late 19th Century.  Since then his work has come to represent the linear grace of Early Renaissance painting.  A master of the line, Botticelli knew better than any of his contemporaries how a clean and unsullied line could communicate power and beauty in art.

With that little introduction out of the way, let me share the 10 works I liked best.

Some things never change.  When you’re an unmarried man and can’t find anyone, what do you do?  You get yourself out there, that’s what.  You comb your hair, take a shower, and get your portrait done (which shows you in the best possible light of course.)  After that, all you can do is hope for the best.  In 2014 we do it everyday on Facebook and other social media, while in 1529, the only way was to bring a painter in.

This is a portrait of the Duke of Mantua, painted by Titian.  The Duke was looking for a wife and thought including a dog would show his gentle nature, while the rosary beads around his neck depict his intention to leave his checkered past.  All in all, I think it was a pretty good effort, but he’d get a lot farther if he lost those pinky rings.

If that’s not a picture of love, marital bliss and filial piety, then I don’t know what is.  Staring each other down like they just finished an argument and want to slit each other’s throats is not the kind of image I’d want to project to my family and friends.  Seriously, if both of them aren’t contemplating one of divorce, mutilation, or poisoning, then I’d be very surprised.

The truth is though that this kind of strict profile was very popular back then.  Dated around 1465-1470, you’re looking at Piero della Francesca’s rendition of the Duke of Urbino and his wife.  The Duke’s left side of his face is shown for a good reason – he lost his right eye and the bridge of his nose in a sword fighting competition.  His wife had a much worse fate.  She died giving birth at the age of 26 to their ninth child and first son.

The rest of the paintings were done by Botticelli. 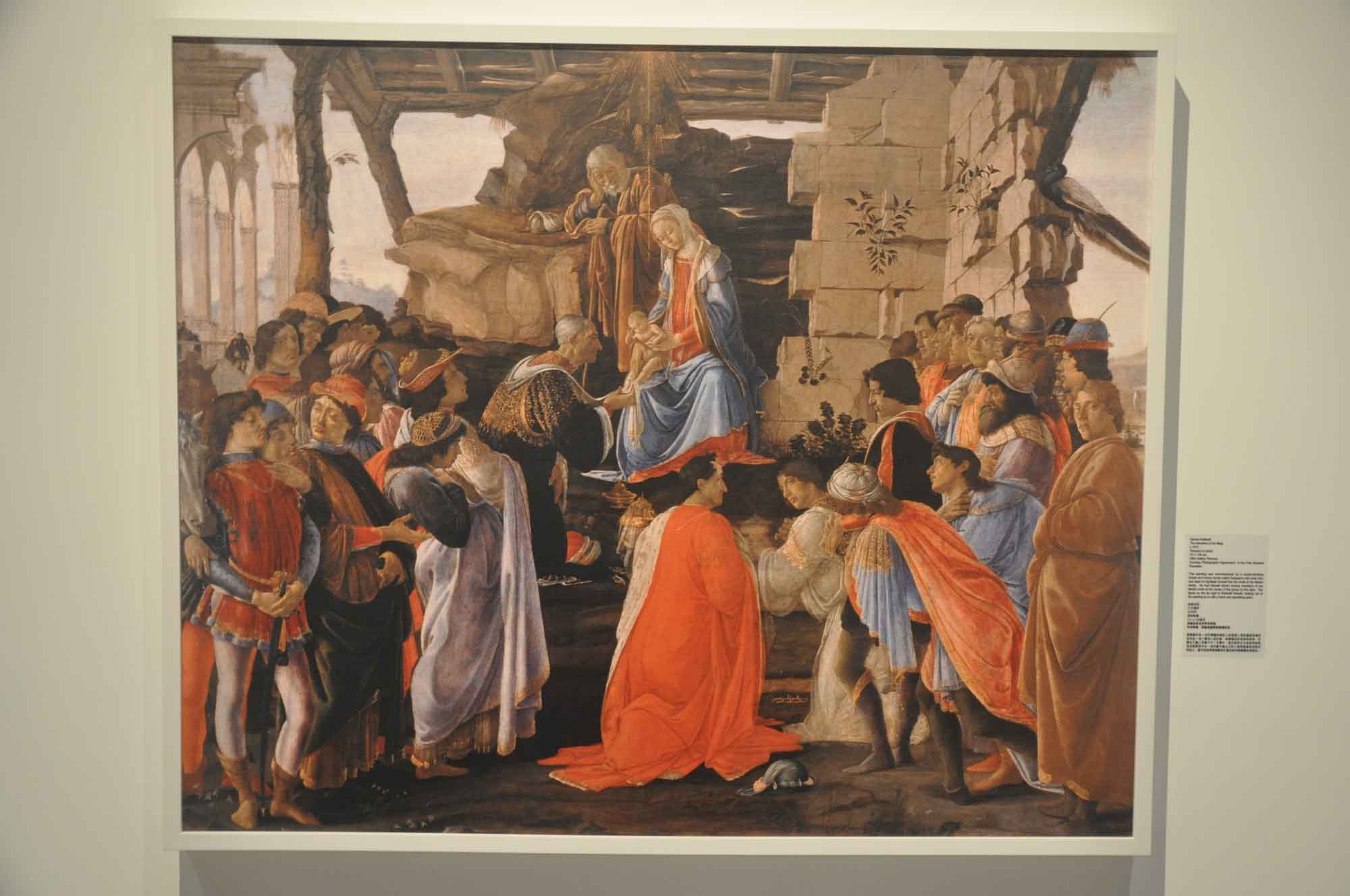 The Adoration of the Magi, painted in 1475.  I included this painting because Botticelli included himself in it.  He’s the man on the lower right hand side checking YOU out, as you check his art out.  I don’t think he looks too impressed with us. 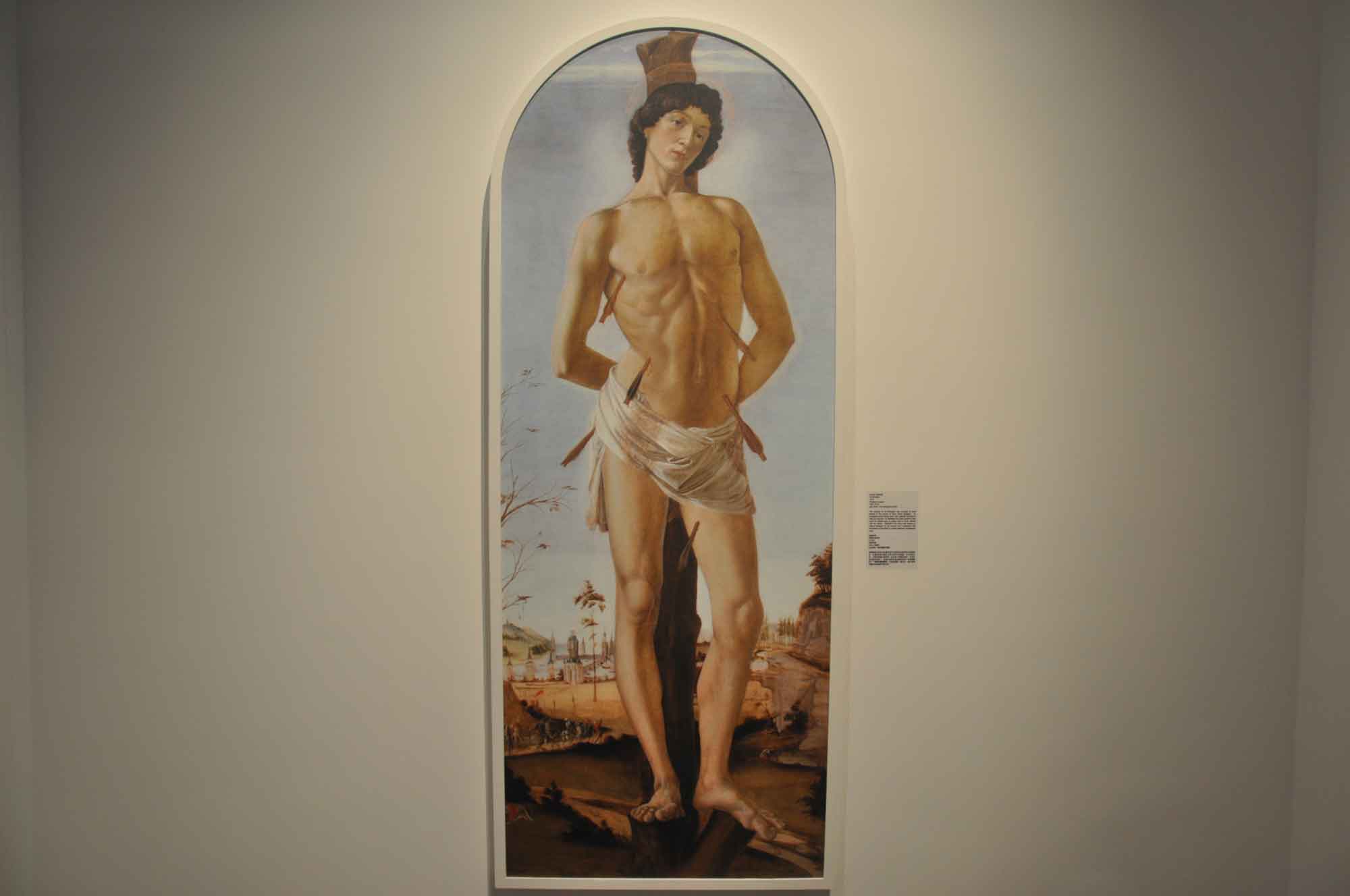 This is how I’d like to go out.  Hoist me up in front of the Grand Lisboa on a crane and take your best shot.  Whoever wants a piece can have one, I won’t back down from anyone.  About the only thing I’d do differently is wear a bandana that reads “F%@K YOU.”   Apart from that, it might look something like the painting.

This poor soul is St. Sebastian, the patron saint of those afflicted with the plague.  Botticelli painted it in 1473. 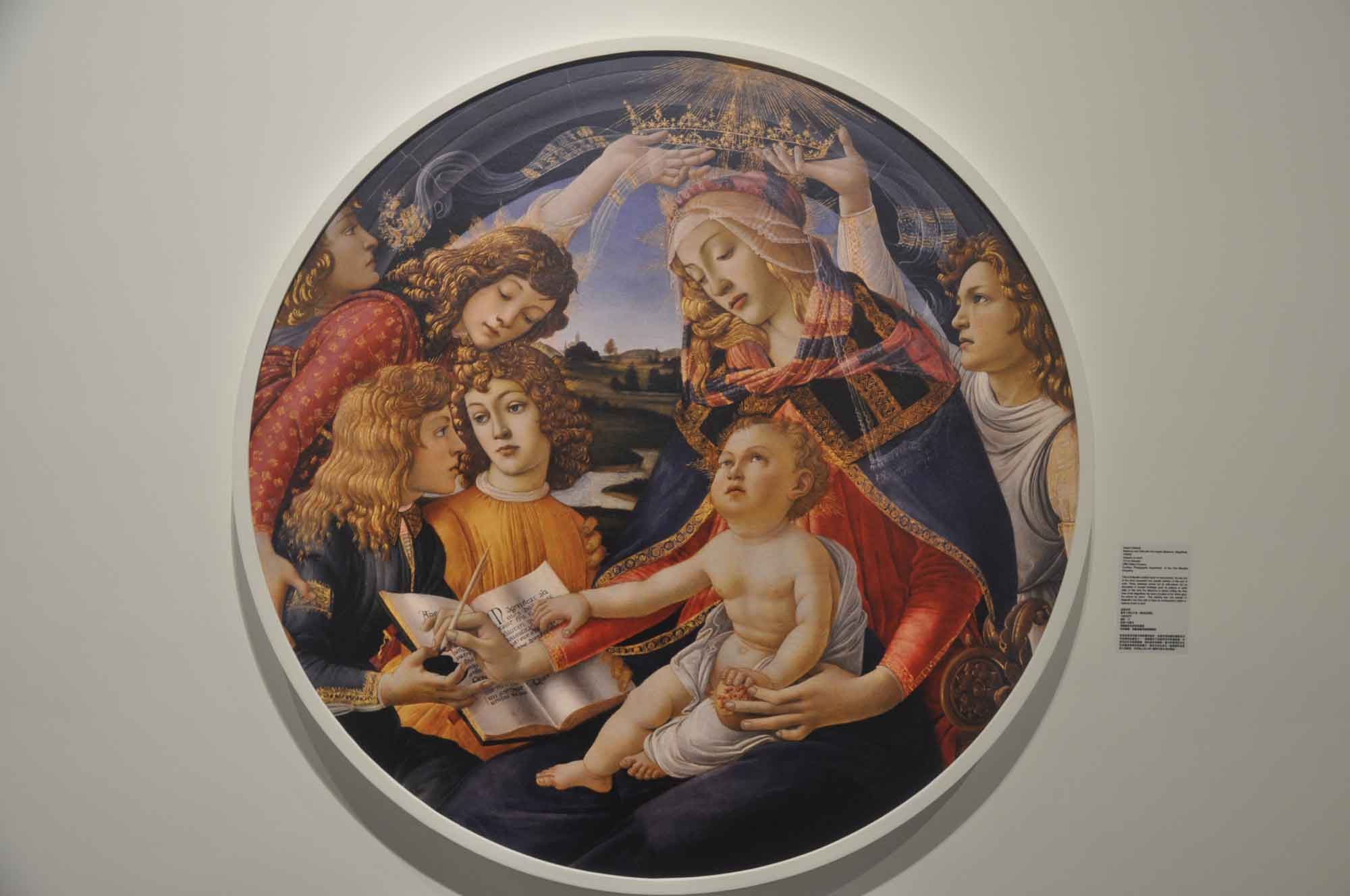 Madonna and Child with 5 Angels.  Very well received by people at the time, this is Botticelli’s earliest round picture, done around 1480-82.  Mary is seen writing the final lines of the Magnificat.

Since Botticelli was very good using this form, I’ll include two more paintings. 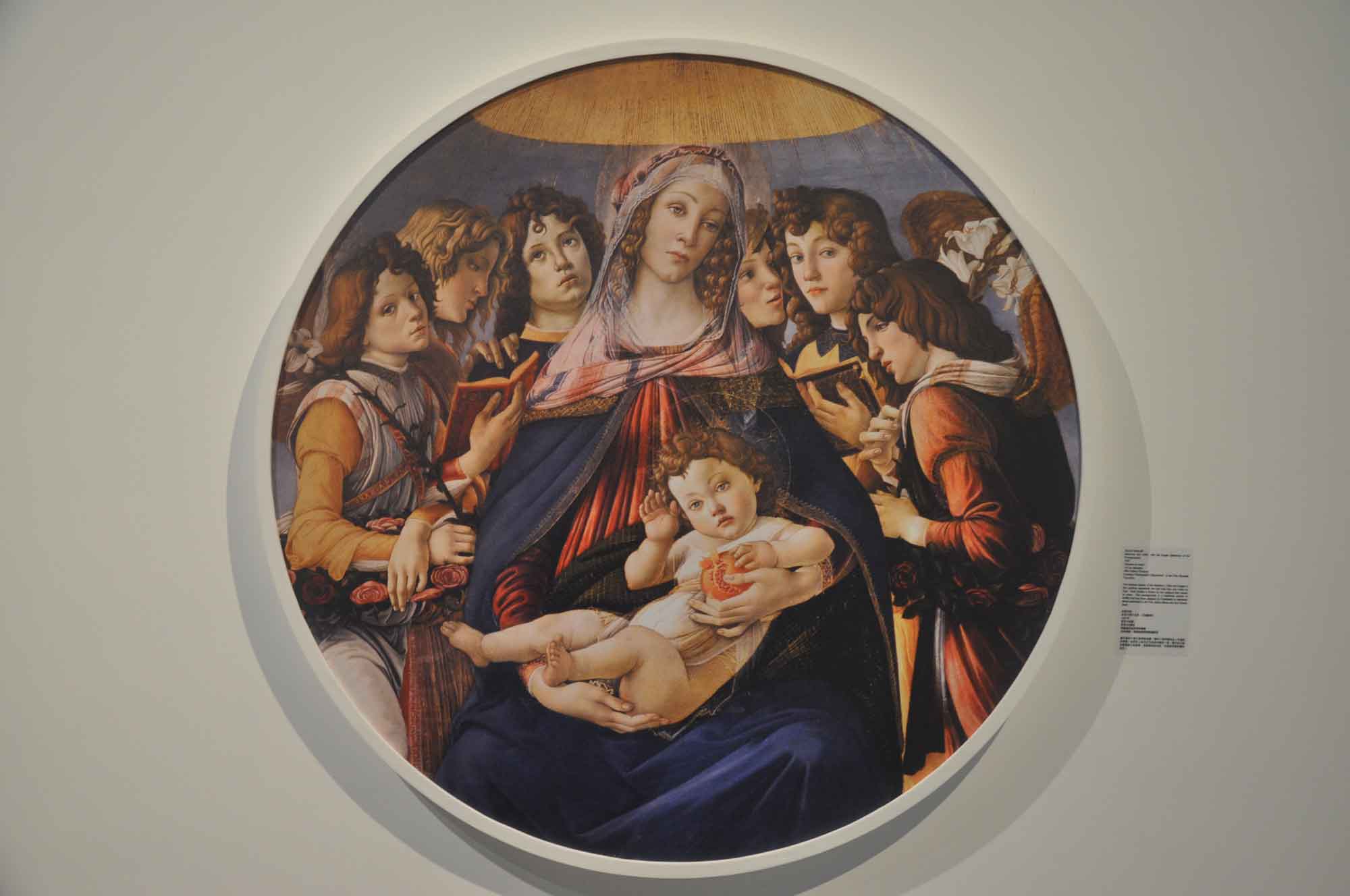 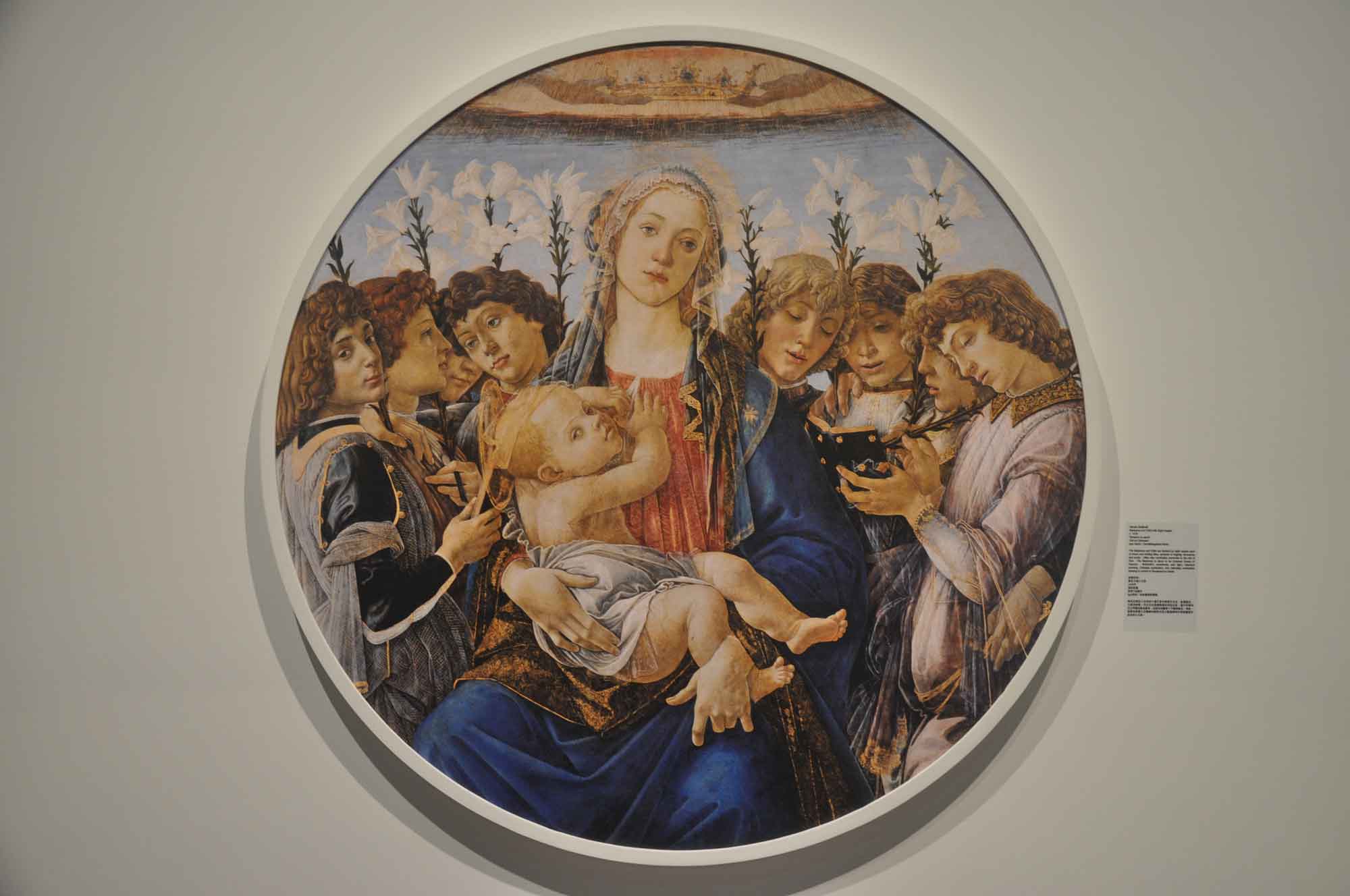 Stunning little picture, this next one. 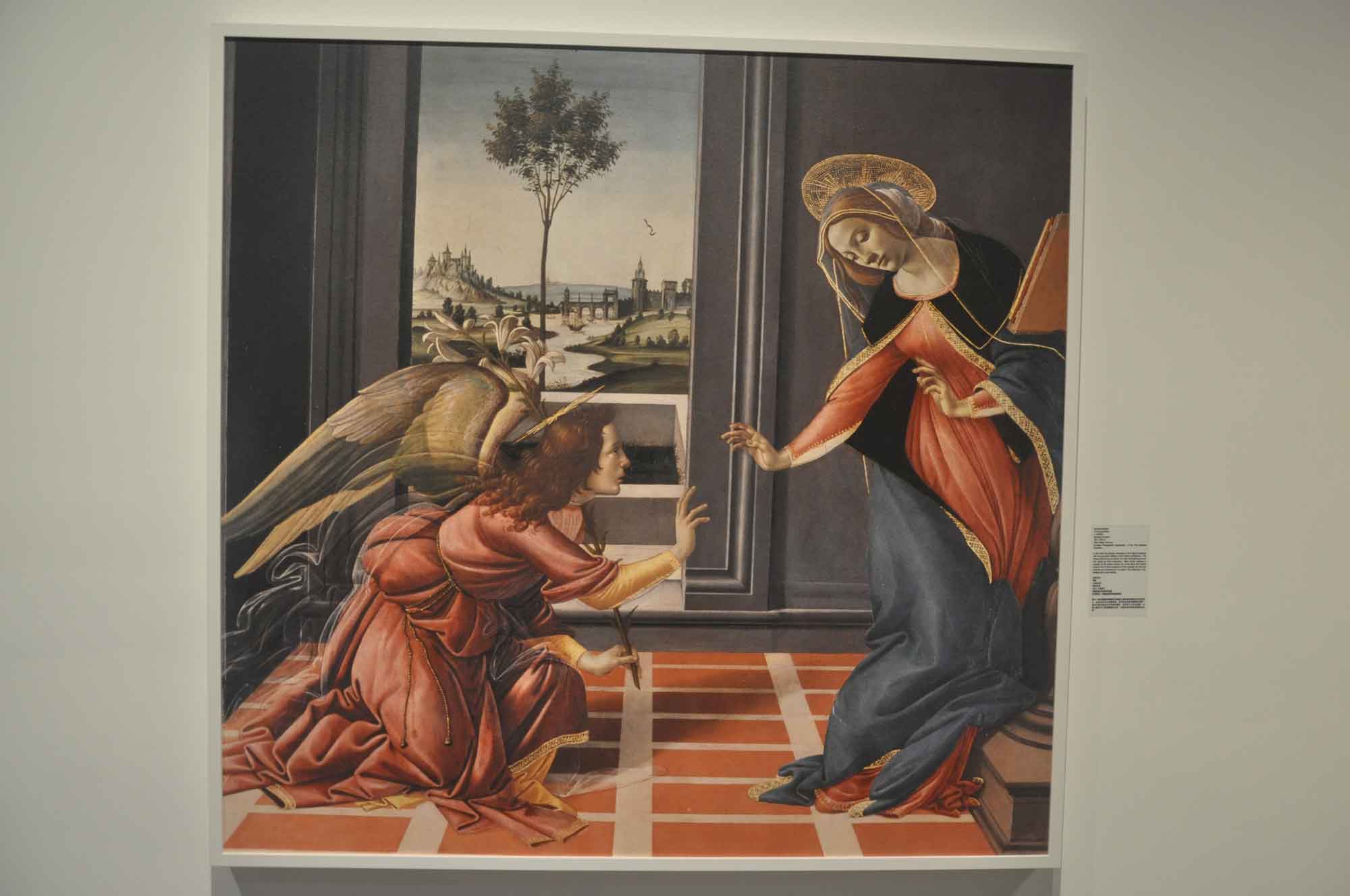 The Annunciation, 1489/90.  The cold hard pattern on the floor is at complete odds with the soft swooping motions of the two principal characters, who look more like dancers.

The angel Gabriel has just arrived.  Mary recoils, perhaps a little surprised, but at the same time bends toward him accepting his message. 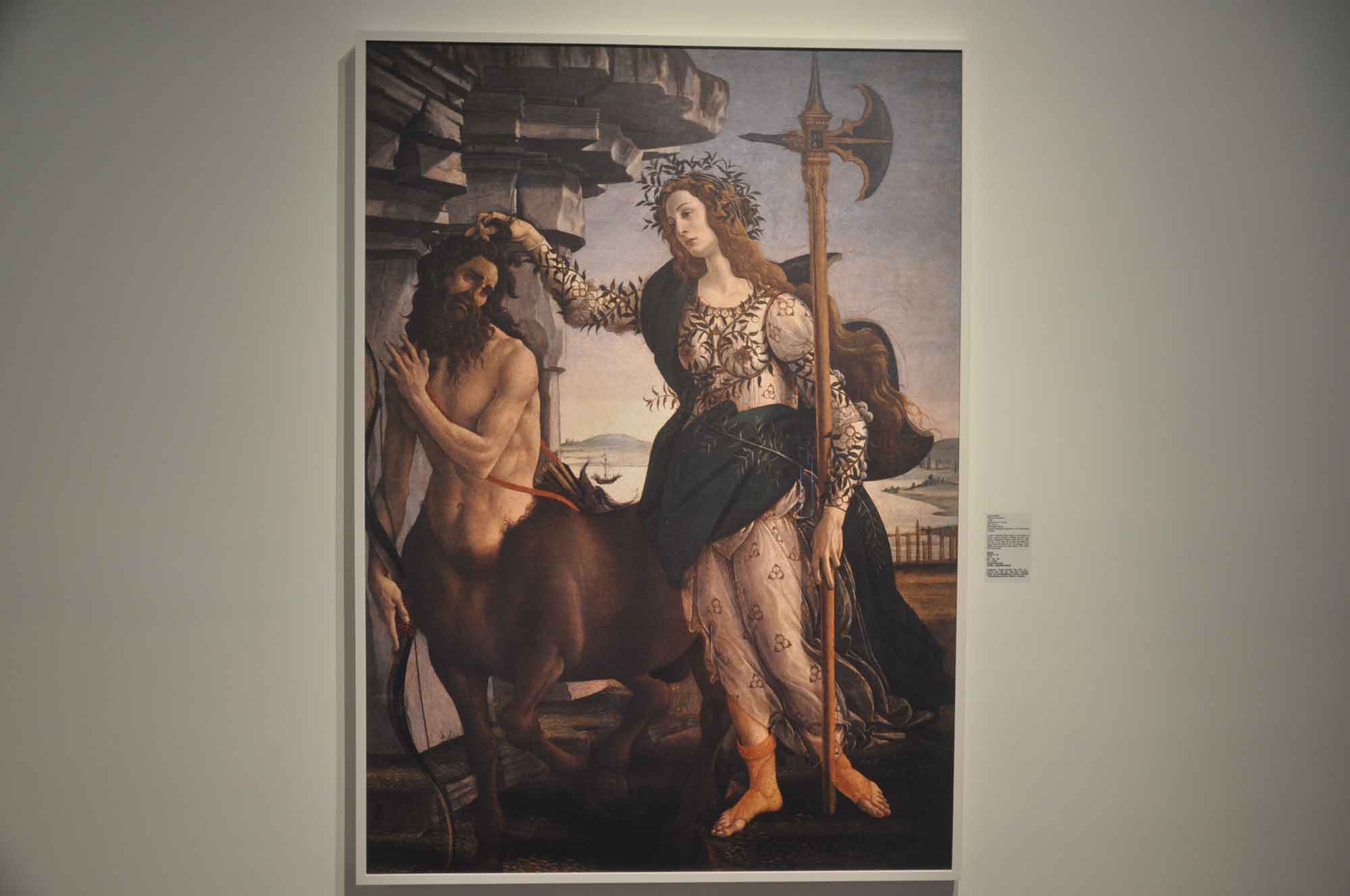 Pallas and the Centaur, 1482.  Another good one.  Wisdom is signified by the woman, dumb violence by the Centaur.  And how she looks at him with such compassion and pity is really moving.  You damn fool, you can’t help yourself and we both know it.  I see him saying spare me, I know not what I do, and I think she will.

But then again, she is a woman and that is one hell of a diabolical looking sword. 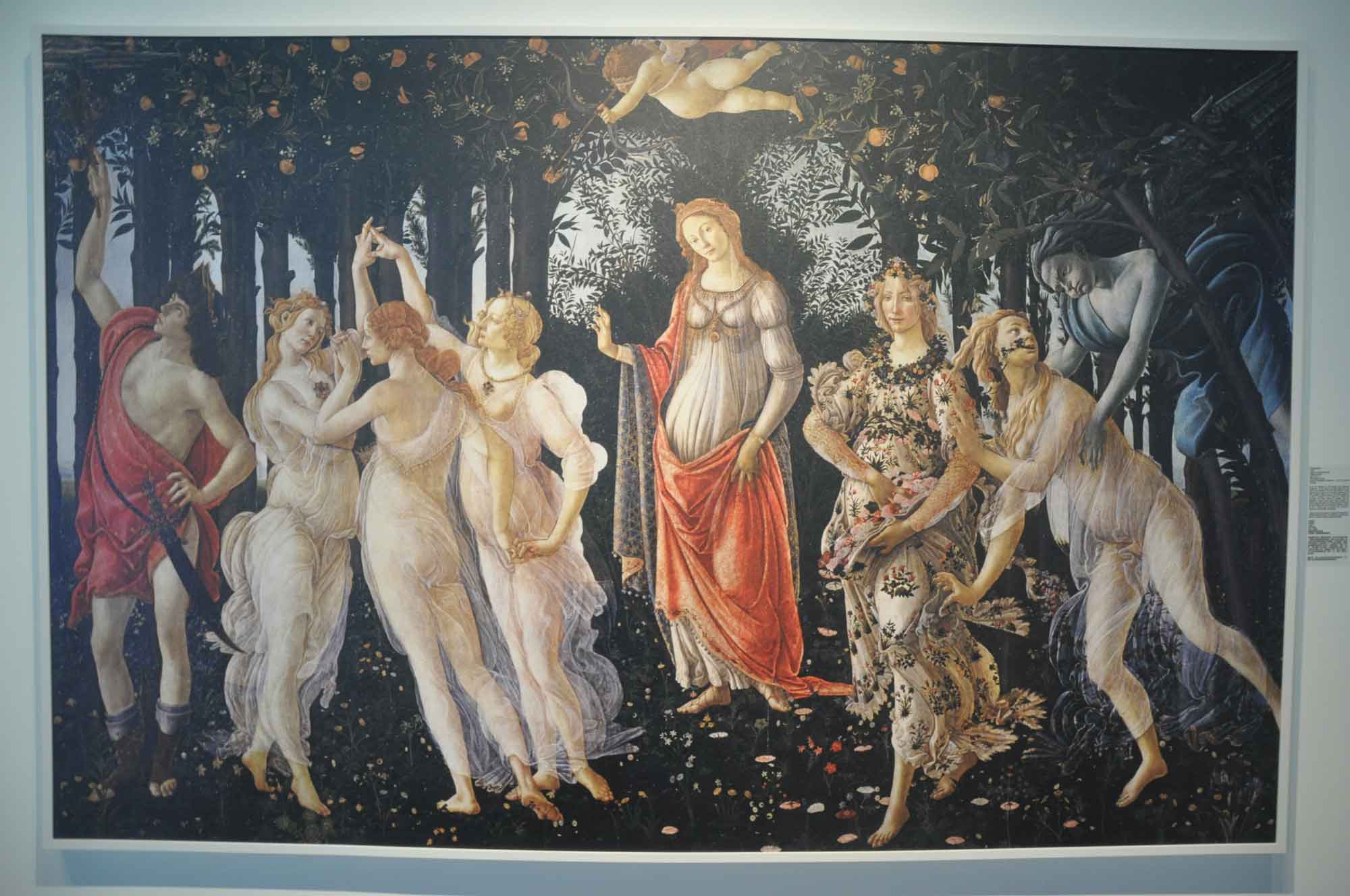 Primavera, 1482.  One of the most famous paintings in Western art, Primavera is an allegory for spring.  The detail in the background is amazing, as there are over 500 identified plant species and 190 different flowers. 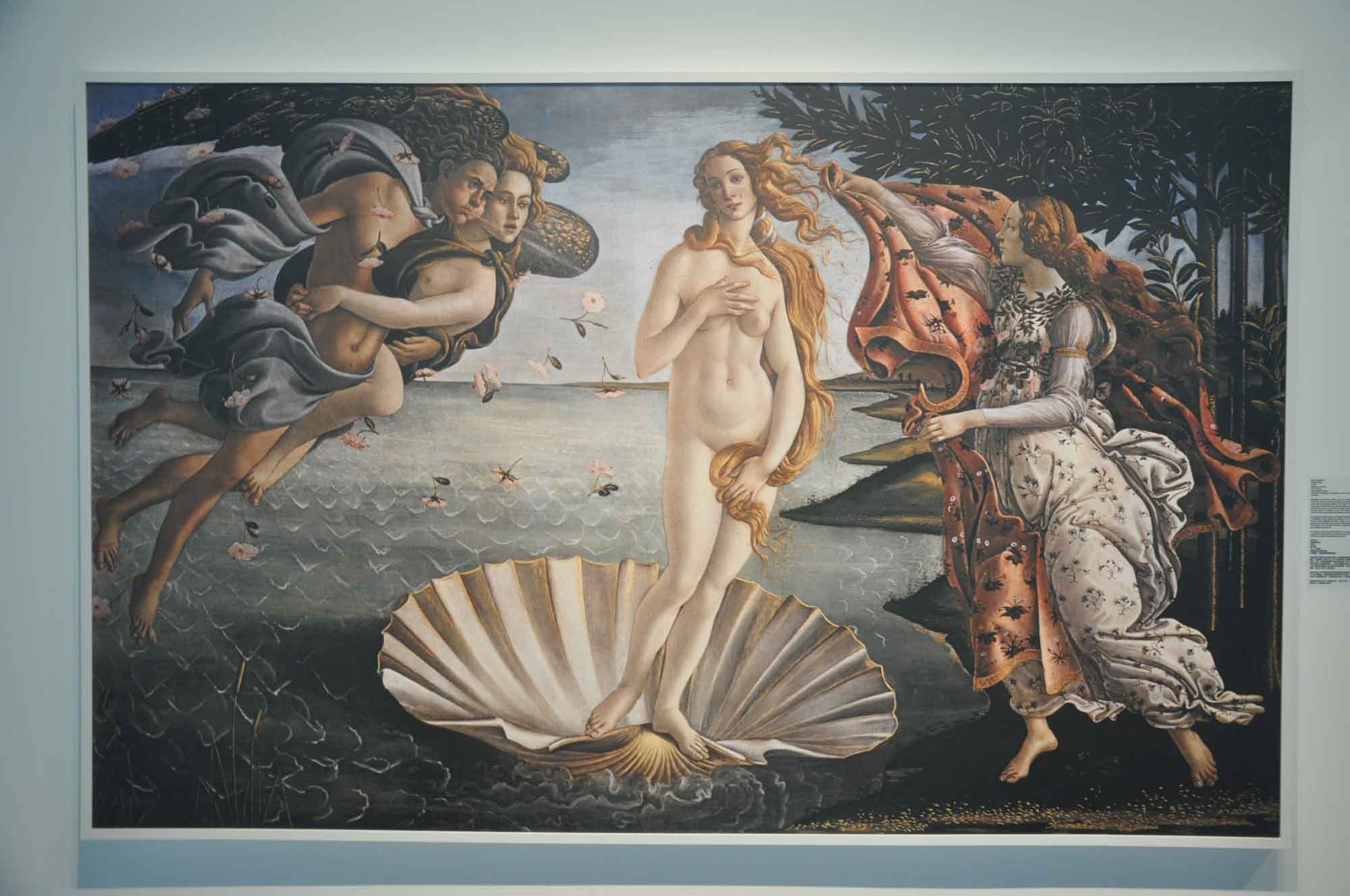 Birth of Venus, 1485.  Although it’s Botticelli’s most famous painting, there’s no real consensus as to what its about.  The eternal feminine and the Goddess of Love, Venus, emerges from the sea as a grown woman.  Clearly a fantasy image, no woman could have held such a pose, especially when standing on the edge of a shell.  There also aren’t any shadows in the background.

Botticelli was one of the first artists to do female nudes, something quite controversial at the time.  Had it not been for the protection of the Medici family, who controlled and sponsored the art scene at the time, he might have gotten in serious trouble with the Church. 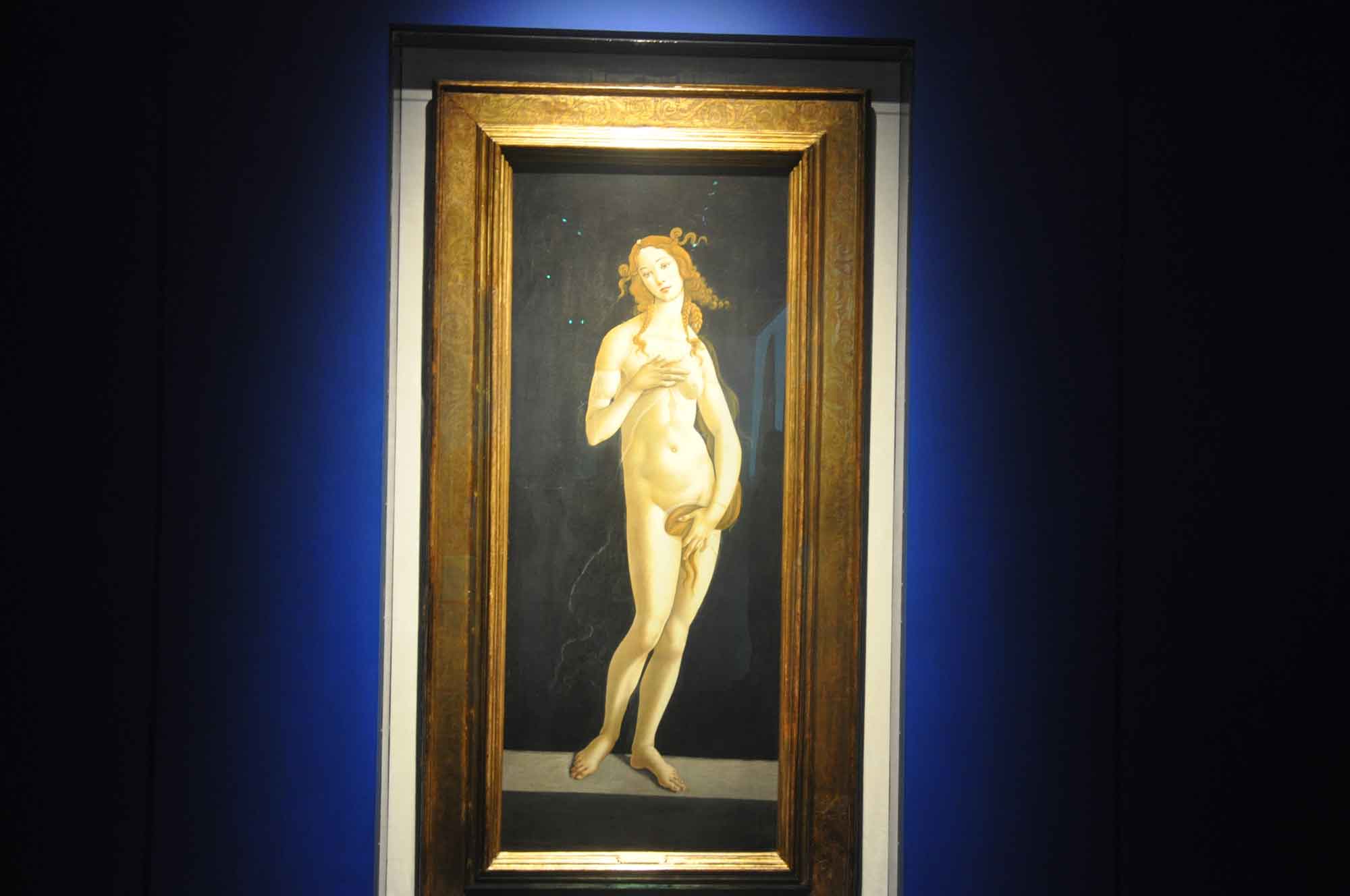 The last painting of the exhibition was the only original one, Venus, painted by Botticelli in 1482.  The model was said to be Simonetta Vespucci, a married noblewoman, renowned for being the most beautiful woman of her age, at least in Florence, anyway.  She died in 1476 at age 22 of tuberculosis, six years before this painting was done.  Botticelli apparently loved her all of his life, never marrying.  After he died in 1510, he was buried at her feet.

Maybe after I die I can be buried at the feet of Sophia Loren.  Because a prime Sophia Loren destroys all comers, including this Mrs Vespucci.  Her hair kind of freaks me out, like looking at the Medusa.

It’s interesting that Botticelli leaves the background dark and empty.  I guess he wants Venus to be the only star of the show.

After the exhibition closed in March, it was announced that it had drew over 42,000 visitors.  I thought those numbers were a little disappointing, averaging out to less than 400 people per day.  It’s not like the exhibition cost money or anything.

Just because we’re on a bit of an art kick here, I’d also like to share the outstanding French Masterpiece exhibition that was held at the Art Museum later on in the summer.  Of the 12 paintings shown, I thought 5 really stood out.  I’ll go into more detail about those ones at the end. 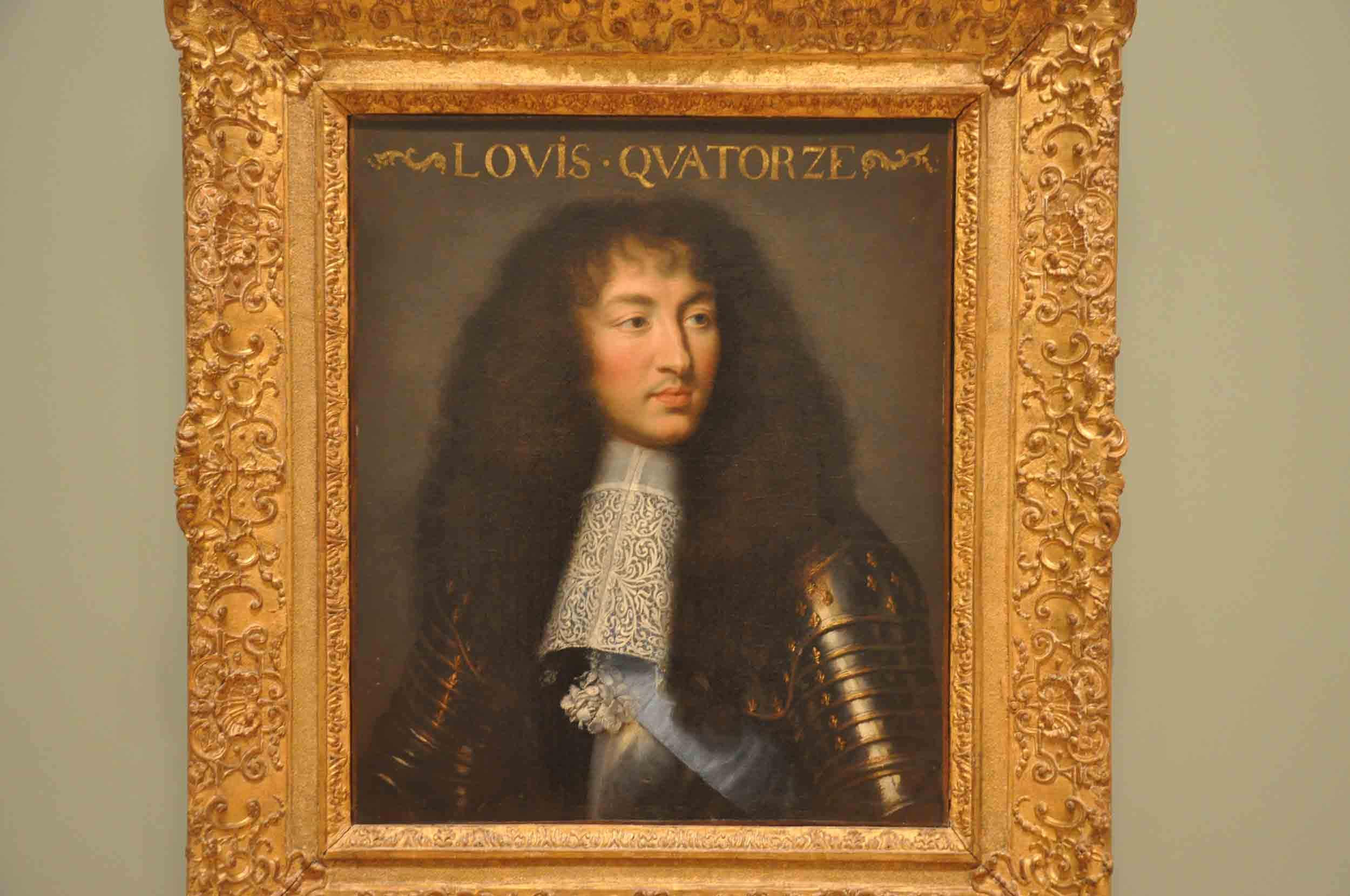 The Sun King in all his glory. 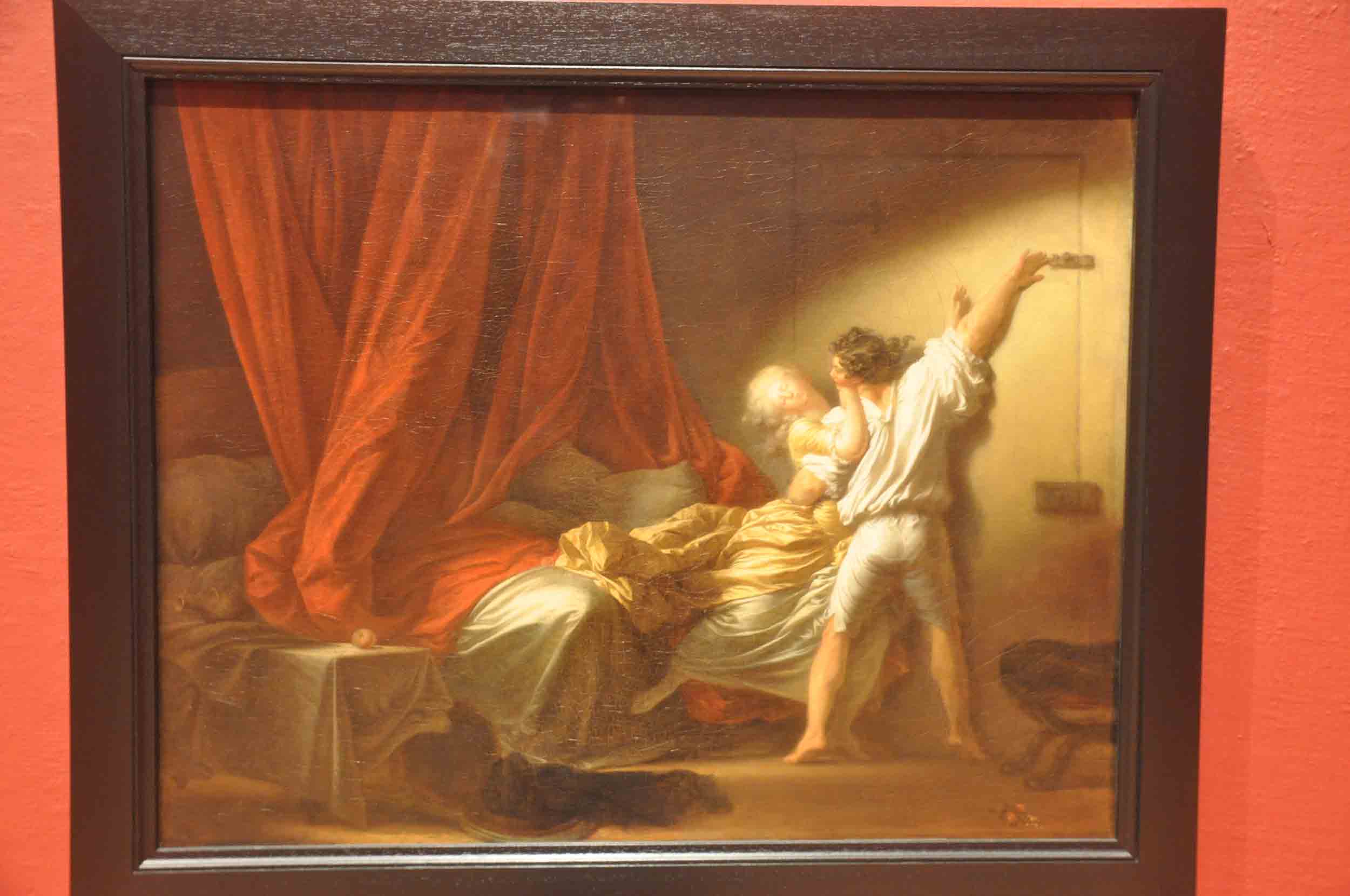 Man, they had to take a lot of clothes off back then. 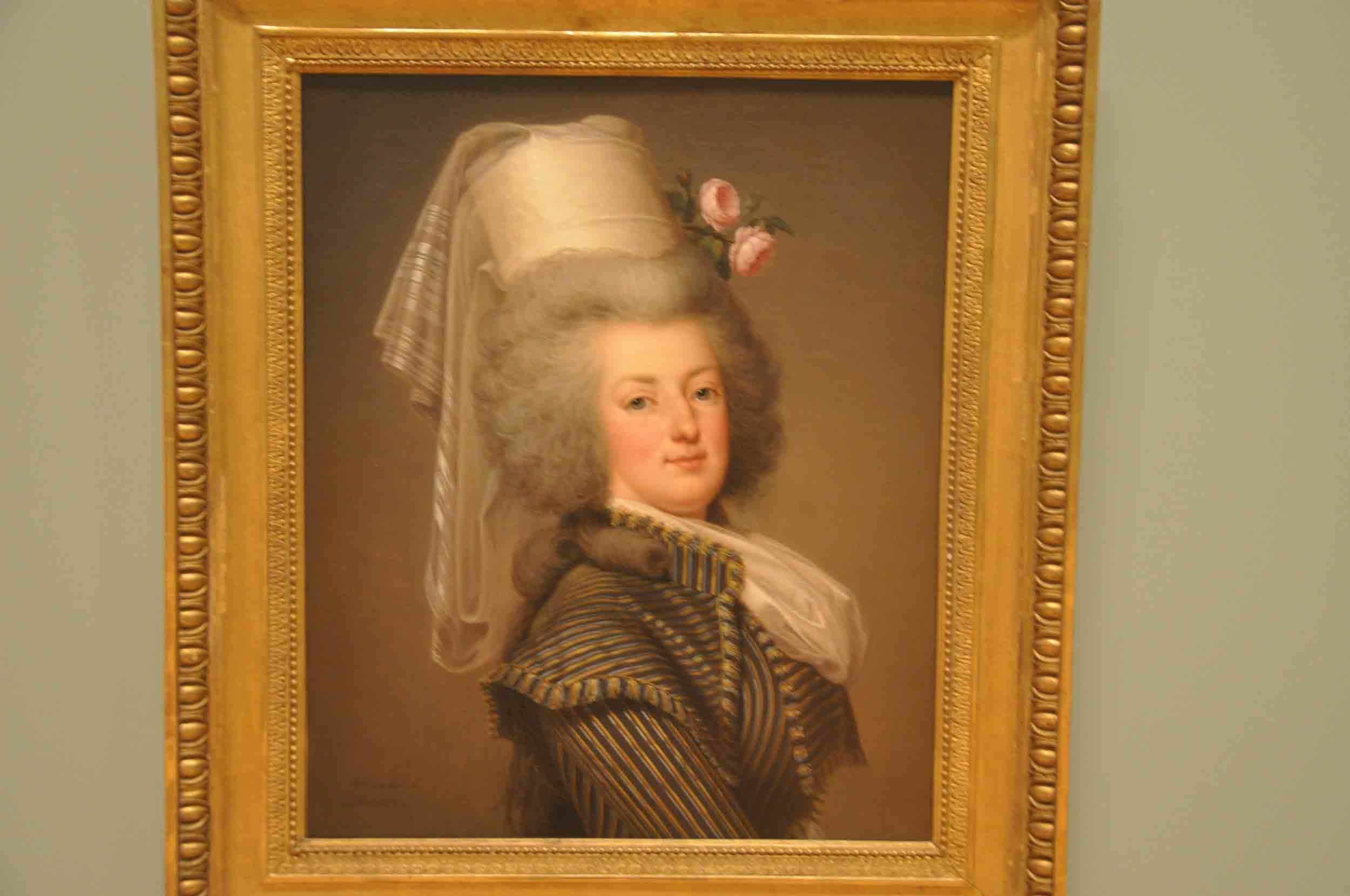 The “Austrian Woman”, when she still had her head. 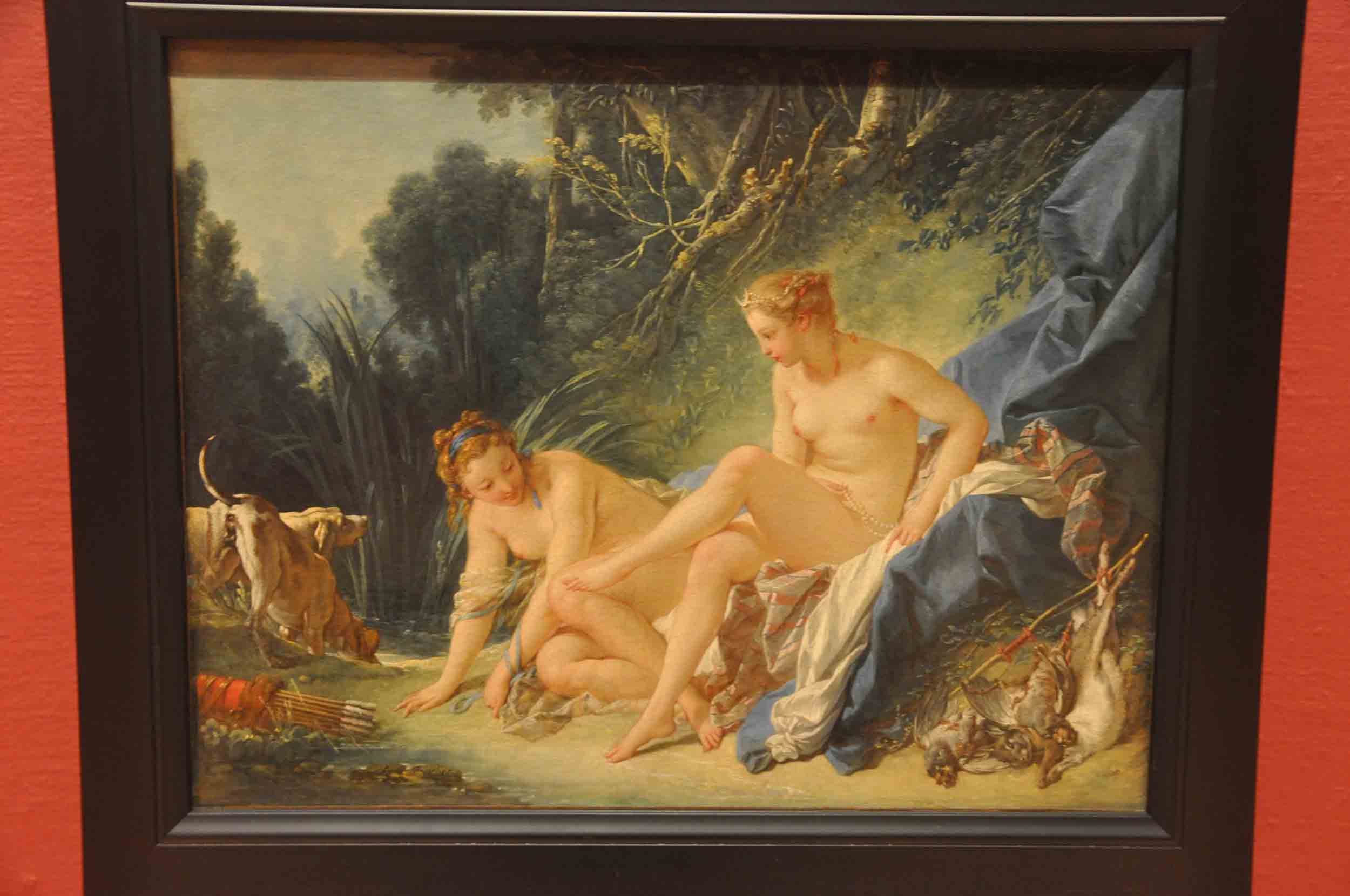 Boucher disdained Nature, saying it was “too green and badly lit.”  So he painted voluptuous babes instead, and ain’t that god damn right? 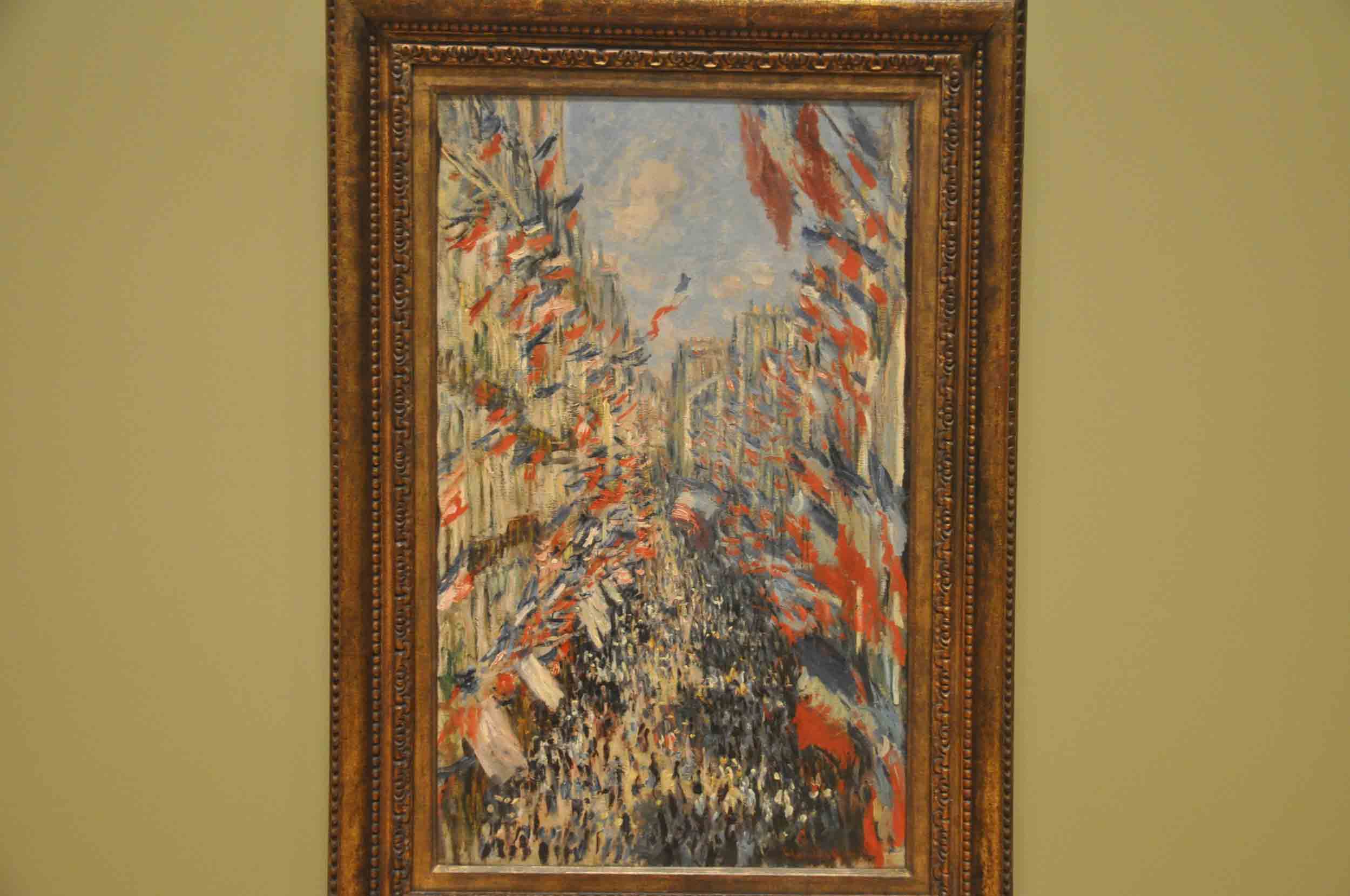 Monet rarely painted urban scenes, but this parade was an exception. 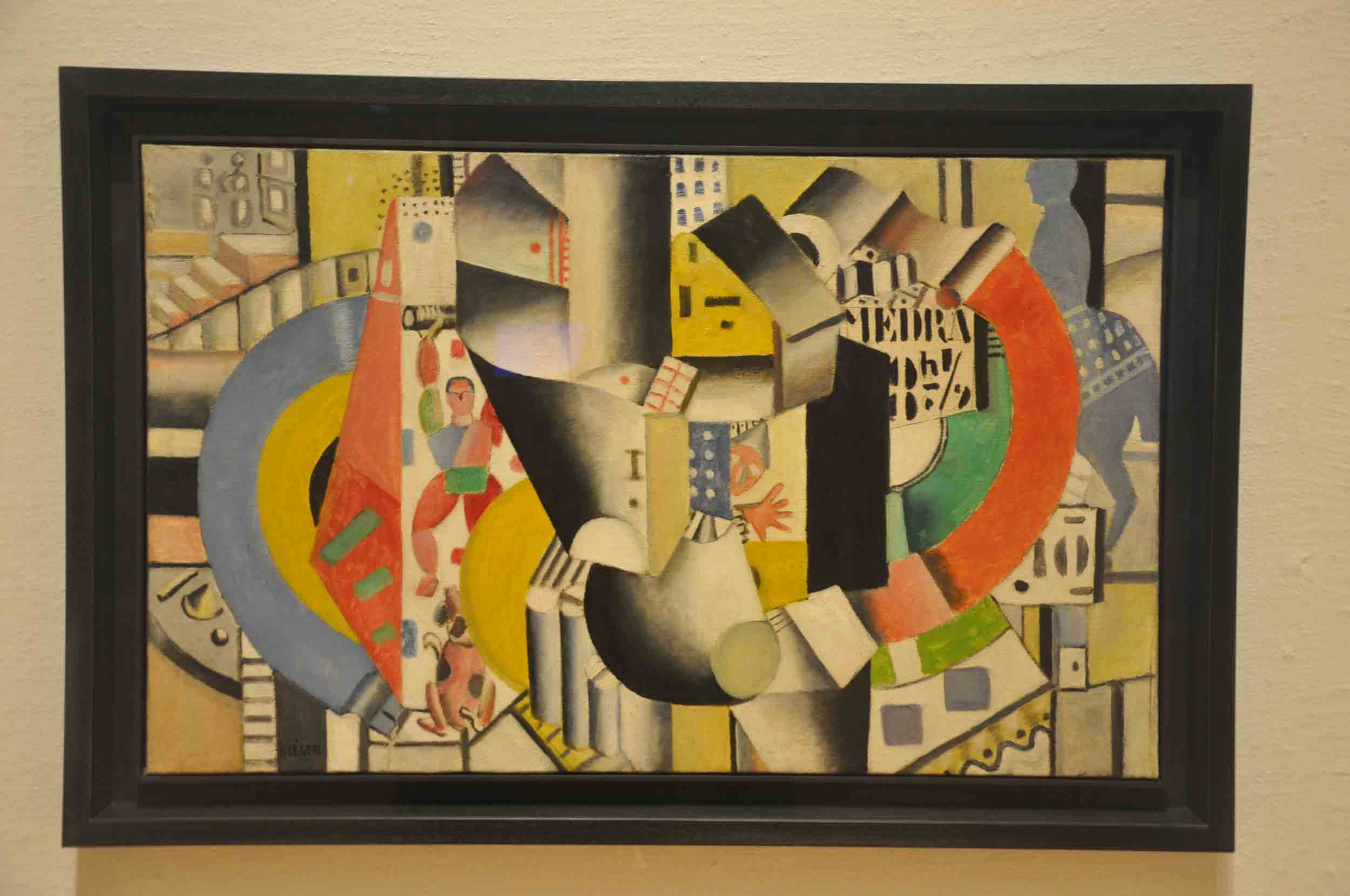 The circus is in town with this one.  But as modern art goes, I’ve definitely seen much worse. 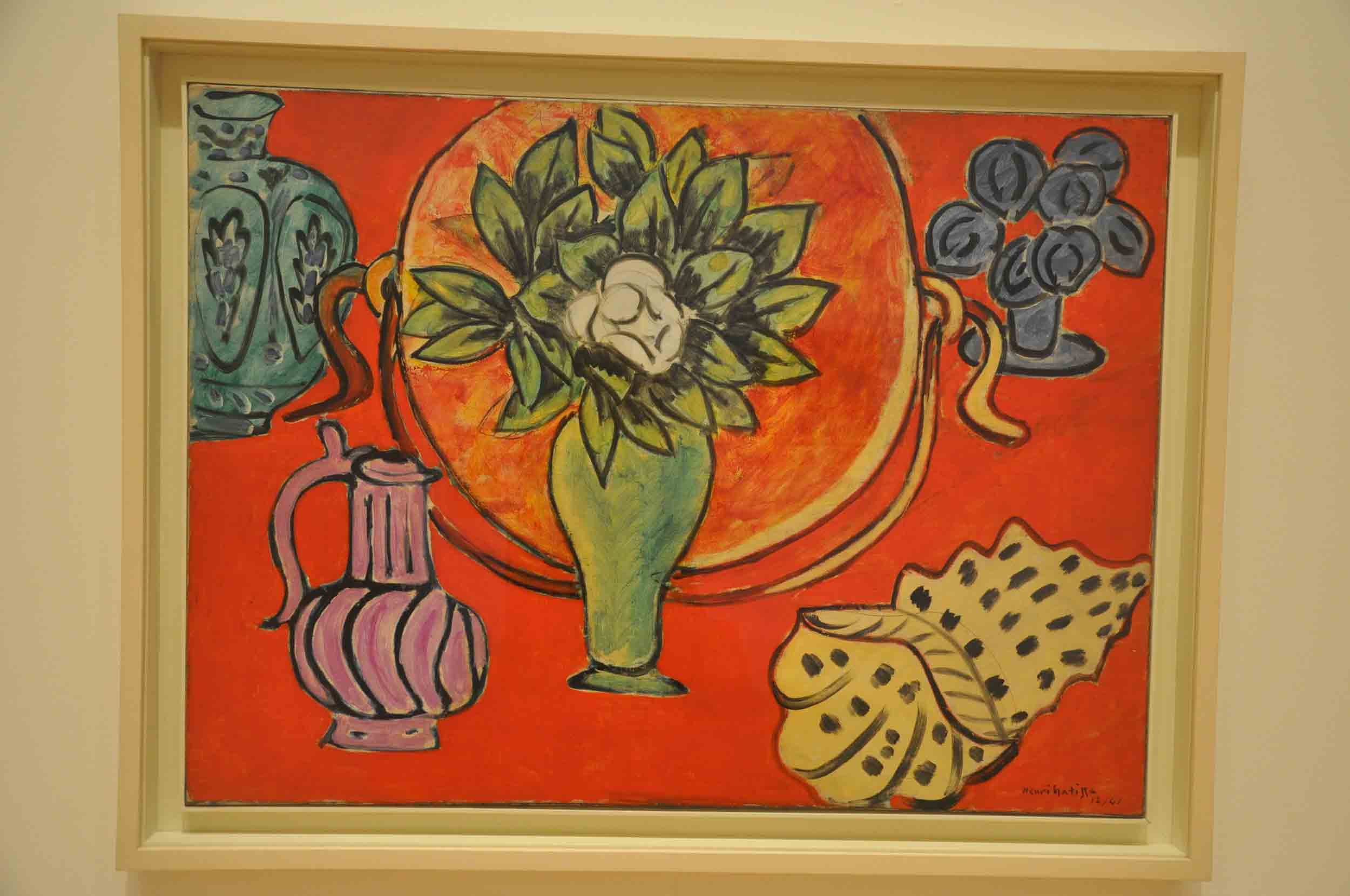 I guess by 1941 painters had finally figured out that they weren’t getting paid by the hour.  Why work for 40 hours when you can finish in 2?

And here are the 5 I liked best: 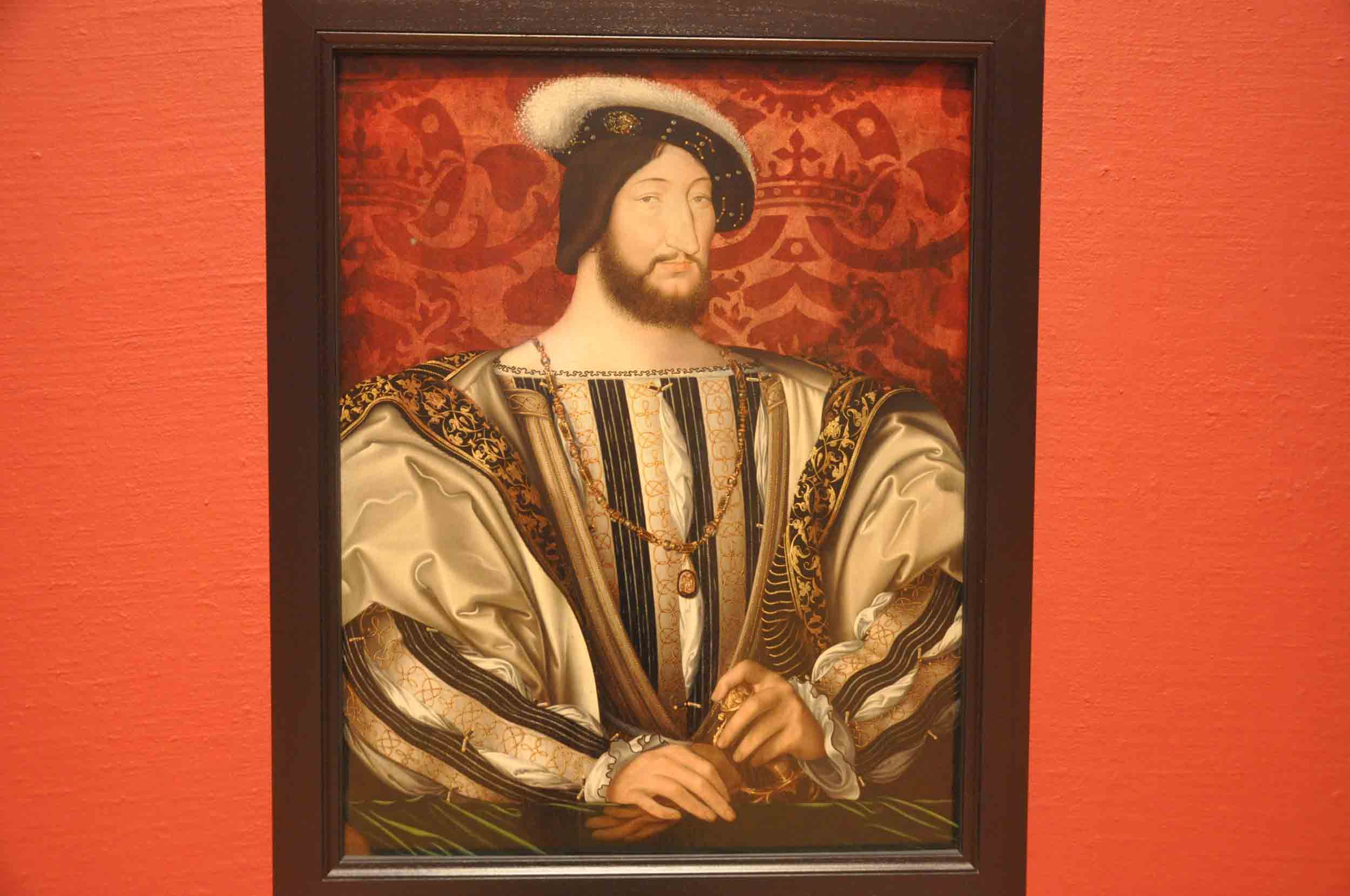 What strikes me most about this painting is the detail in the gown.  It’s amazing that someone could draw that. 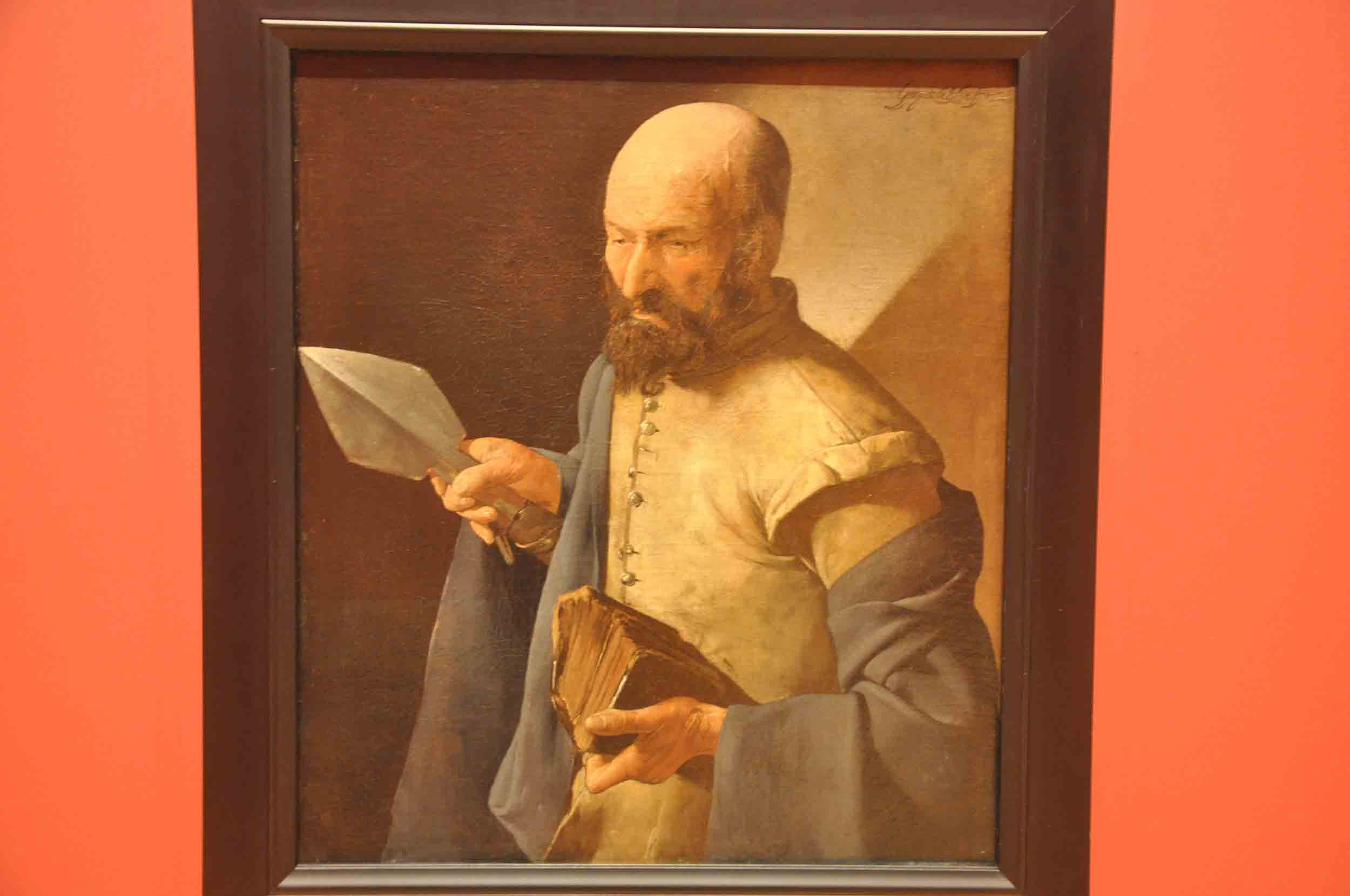 This saint looks like a more disturbing version of Captain Jean Luc Picard.  Carrying both a sword and book, I don’t know which one he’ll use first.  Is he like the woman above or is he the Centaur?  Or is he a dangerous combination of both?  That sword also looks like it could come out of the painting at any time and do some serious damage.  The veins bulging on his head are disconcerting as well. 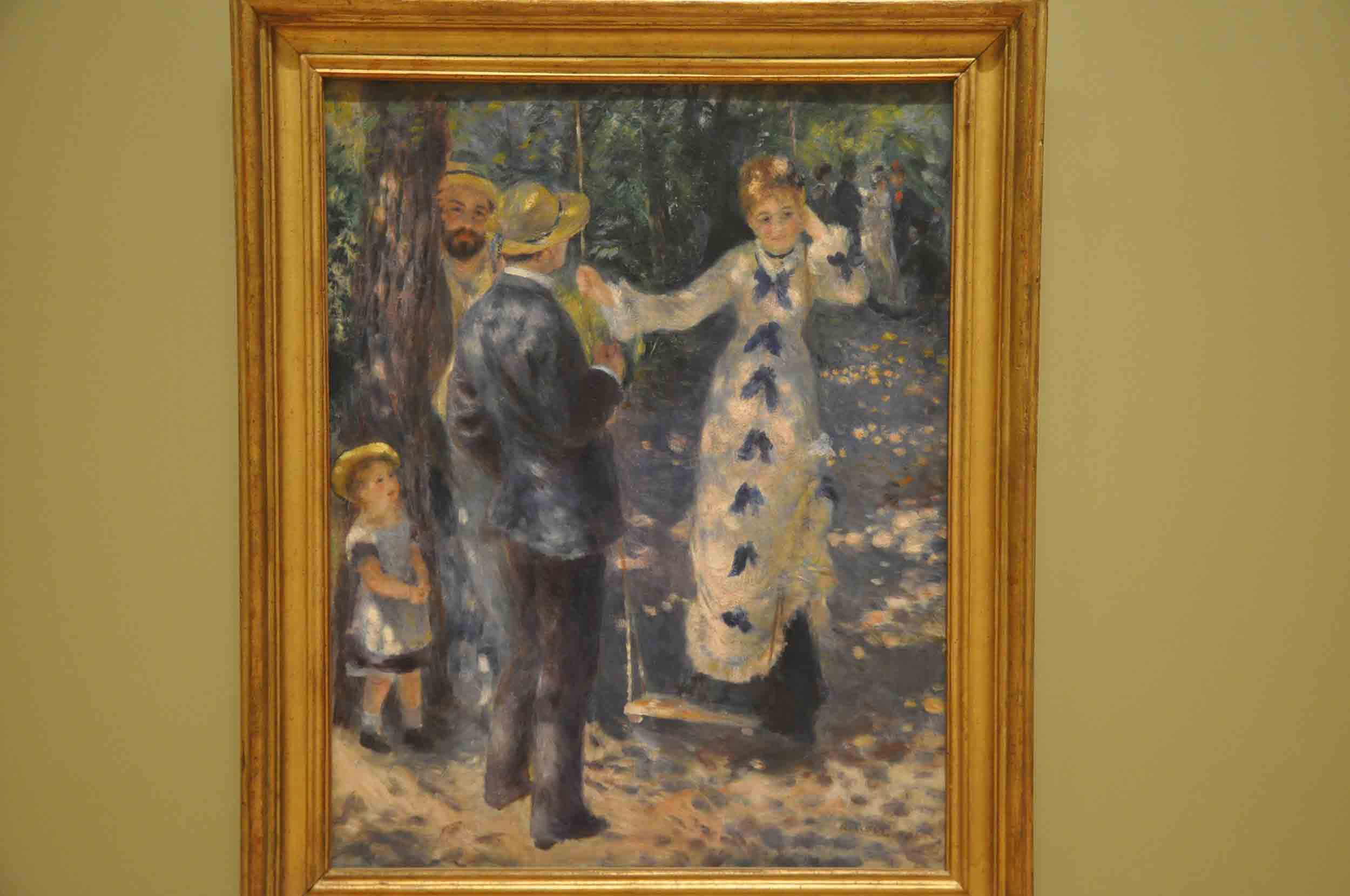 The showstopper and the reason why people should live their lives.  This painting is so far removed from my existence in China that I don’t even want to look at it.  Chinese parks don’t even have swings, just a bunch of utilitarian exercise equipment instead.  People don’t go there to relax or have fun, but work out instead.

What makes this painting for me is the little girl on the left.  Without her it wouldn’t be half as good.  The way she looks up, hands cupped, in some way aware of what’s happening between the young man and girl is both the warmth and wonder of youth.  The man beside the tree knows what’s going on too, but he knows it from experience, while the girl can just feel it.

The little girl might be looking up at her future as well.  That could be her in 10 years, all grown up and on the swing, shining in her beauty and youth, the object of a young man’s attention.  Looking away and blushing slightly, unsure of what to do exactly, but ready to do it anyway. 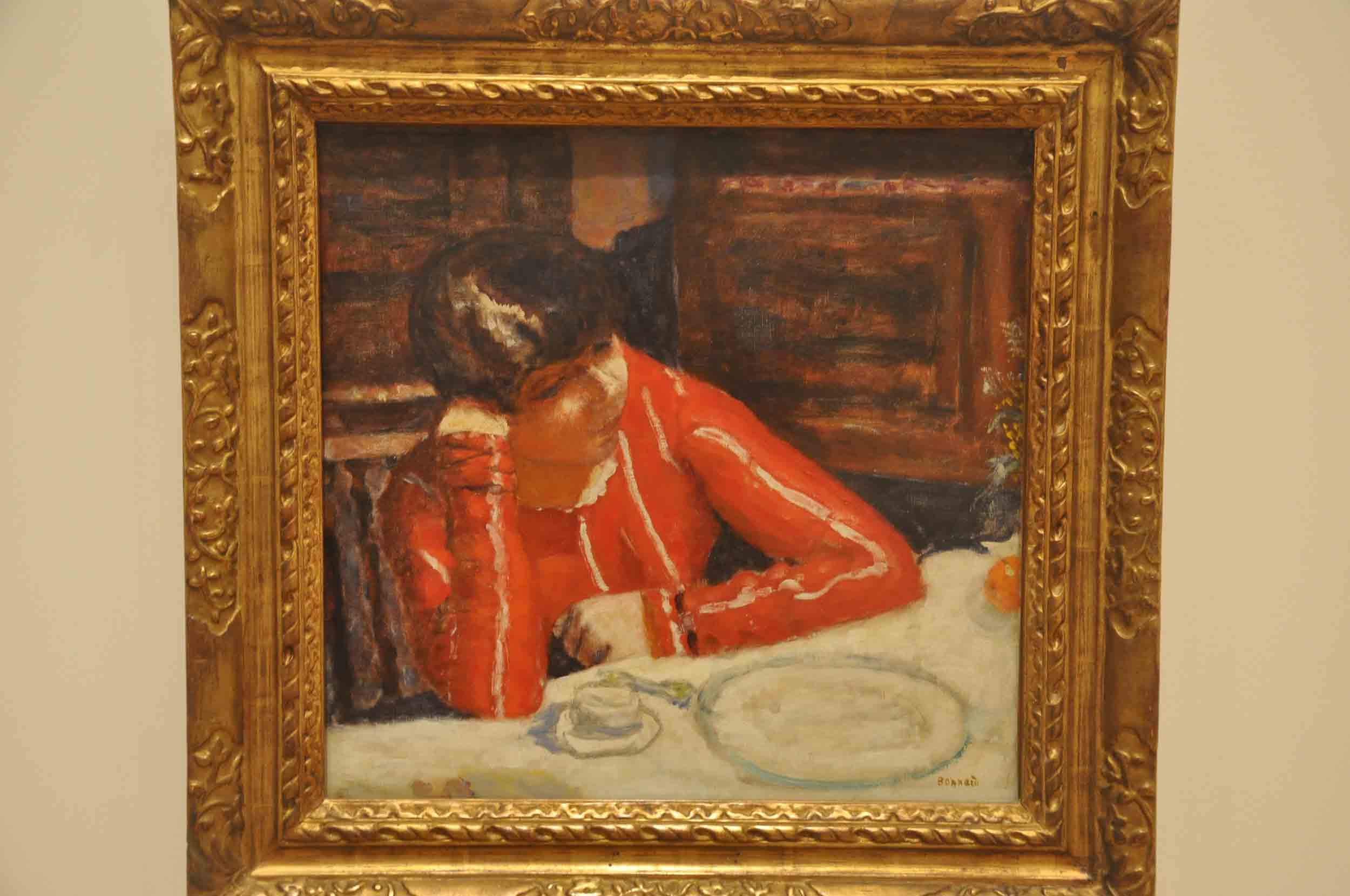 I see a woman stuck in a prison of geometric shapes.  There’s the square cabinet behind her, the round plate and cup on the table, the triangular shape of her bent arm.  Perhaps trapped in the misery of her banal domestic existence, Bonnard diabolically pins her between the table and the cabinet, the very objects of her discontent. 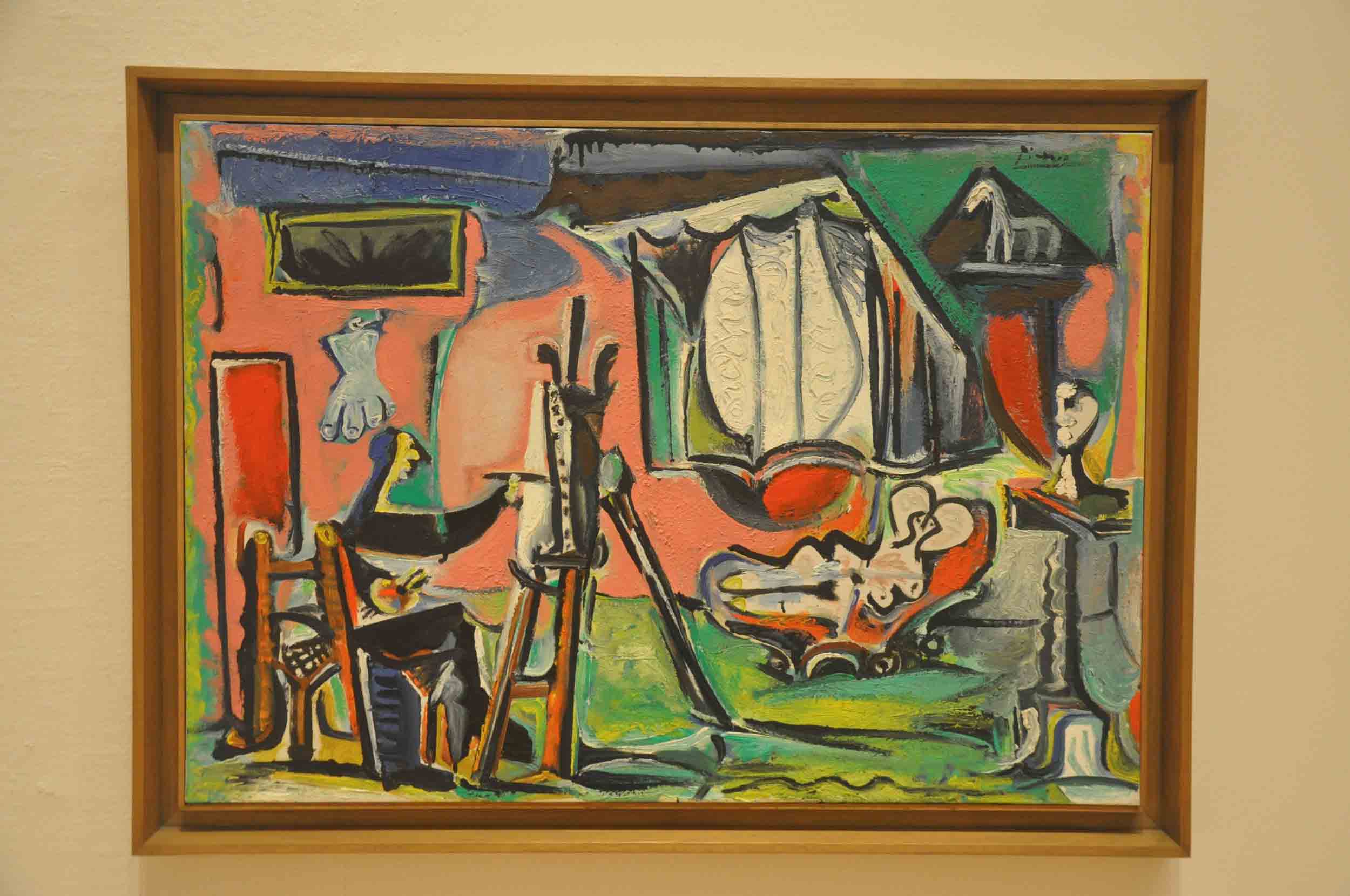 How cool is this?  I usually dislike modern art, but if it’s done like this – AKA something I could never do – then it’s alright with me.  Painted in 1963, 82 year old Picasso’s on acid and the Summer of Love is still four years away.  His model girl on the couch is his latest flame, some girl 60 years his junior, giving him what he wants as she lays on a couch.  I don’t think anything looked like this in 1963, which is why I like it so much.

In the introduction to the painting, Picasso talked about his later works like this one, saying that it took him a lifetime to paint like a child.  And as I sit here now writing this, thinking about what’s left of the hair on my head and what I’ll do for my 37th birthday, I do feel a bit better.  Maybe it’s not all downhill from here, maybe the Fountain of Youth is there for everyone, if you know where to find it.  Something else just occurred to me too the other day that’s been providing solace as well – You’ll never be as young as you are right now this minute, this second, so enjoy it.

After the art exhibition, I hit the Craps table at MGM, the only place you can still play it on the old Macau Peninsula.  After hitting a particularly grievous run I cut my losses and headed back to the Guia.