2012 Our Lady of Fatima Procession

First I’d like to explain the origin of this festival.  (With a big assist from Wikipedia.) 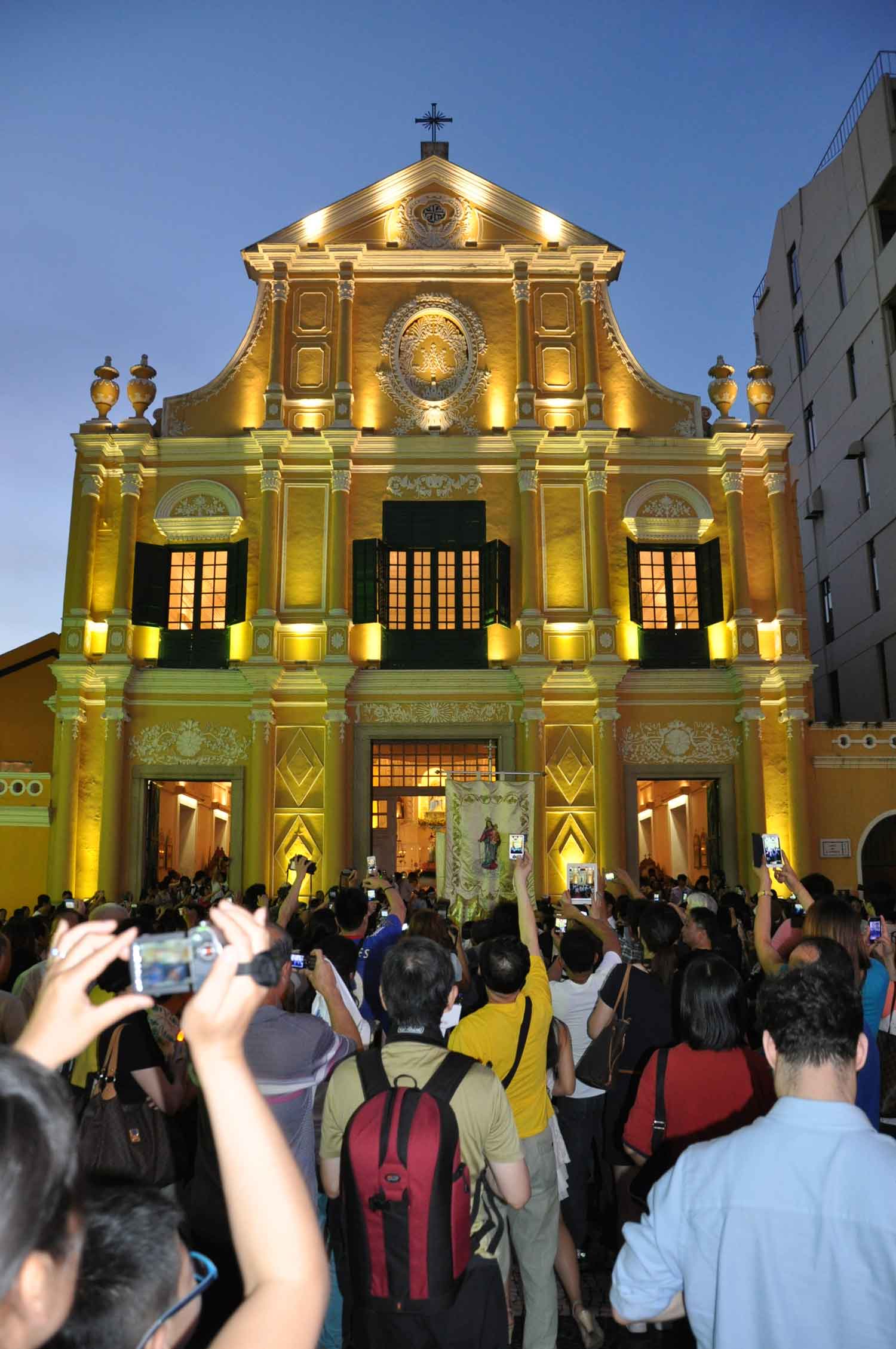 It owes itself to the strange happenings that occurred in Fatima, Portugal in 1917.  The Virgin Mary appeared to three shepherd children on the 13th day of six consecutive months, starting on May 13 and ending on October 13.  The children were 10 year old Lucia, and her two cousins: 9 year old Francisco and his 7 year old sister Jacinta. 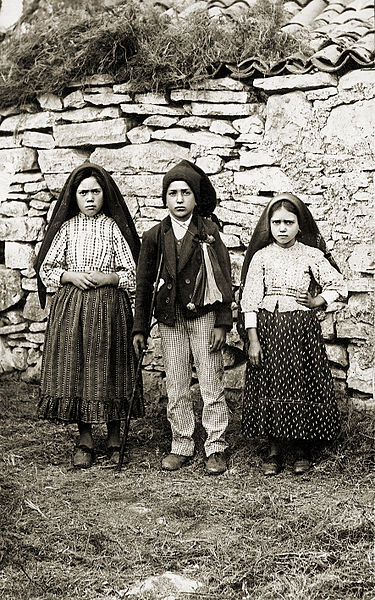 Lucia described the Virgin Mary’s appearance as such: “A woman brighter than the sun, shedding rays of light clearer and stronger than a crystal ball filled with the most sparkling water and pierced by the burning rays of the sun.” During her visits, the Virgin Mary told the children to do penance and Acts of Reparation as well as make personal sacrifices to save sinners. The children subsequently wore tight cords around their waists to cause themselves pain, performed self-flagellation using stinging nettles, abstained from drinking water on hot days, and performed other works of penance. During the course of her appearances, the woman confided to the children three secrets, now known as the Three Secrets of Fátima.

For her last appearance, the sixth one on October 13, the Virgin Mary said she would perform a miracle, so that all would believe in her.  70,000 people gathered along with the three children to wait for it to occur.  Suddenly Lucia called for everyone to look up at the sun, and people began to the see it changing colors and rotating like a wheel, like it was dancing.  Said one witness, “The sun, at one moment surrounded with scarlet flame, at another aureoled in yellow and deep purple, seemed to be in an exceeding fast and whirling movement, at times appearing to be loosened from the sky and to be approaching the earth, strongly radiating heat”. This phenomenon was visible from up to forty kilometres away and became known as the “Miracle of the Sun”.

That day, October 13, 1917, was the last time the Virgin Mary appeared to the three children.

A couple of years later, both siblings Francisco and Jacinta fell victim to the Great Spanish Flu Epidemic of 1918-20. Francisco passed away in 1919 aged 11 while Jacinta joined him a year later, aged 10.  Their bodies were exhumed twice, once in 1935 and again in 1951, and very strangely, Jacinta’s face showed no signs of decay.  According to a witness,  “When both coffins were opened, nothing was found of Francisco but his bones, but Jacinta’s face was intact and incorrupt, she seemed to be only asleep, waiting for the Resurrection, and the good odor of Paradise hung about her. Her mother was one of those who saw her.”

A great deal of interest surrounds the three Secrets that the Virgin Mary reportedly told the children.  One guy even hijacked a plane in 1981 demanding the Vatican tell the world.  Lucia later revealed them to be:

1. A vision of hell
2. Instructions on how to save souls from hell and convert the world to the Christian faith
3. A vision of the death of the Pope and other religious figures

Macau’s Our Lady of Fatima Procession

Every May 13th this appearance of the Virgin Mary in 1917 is celebrated by the Christians in Macau. 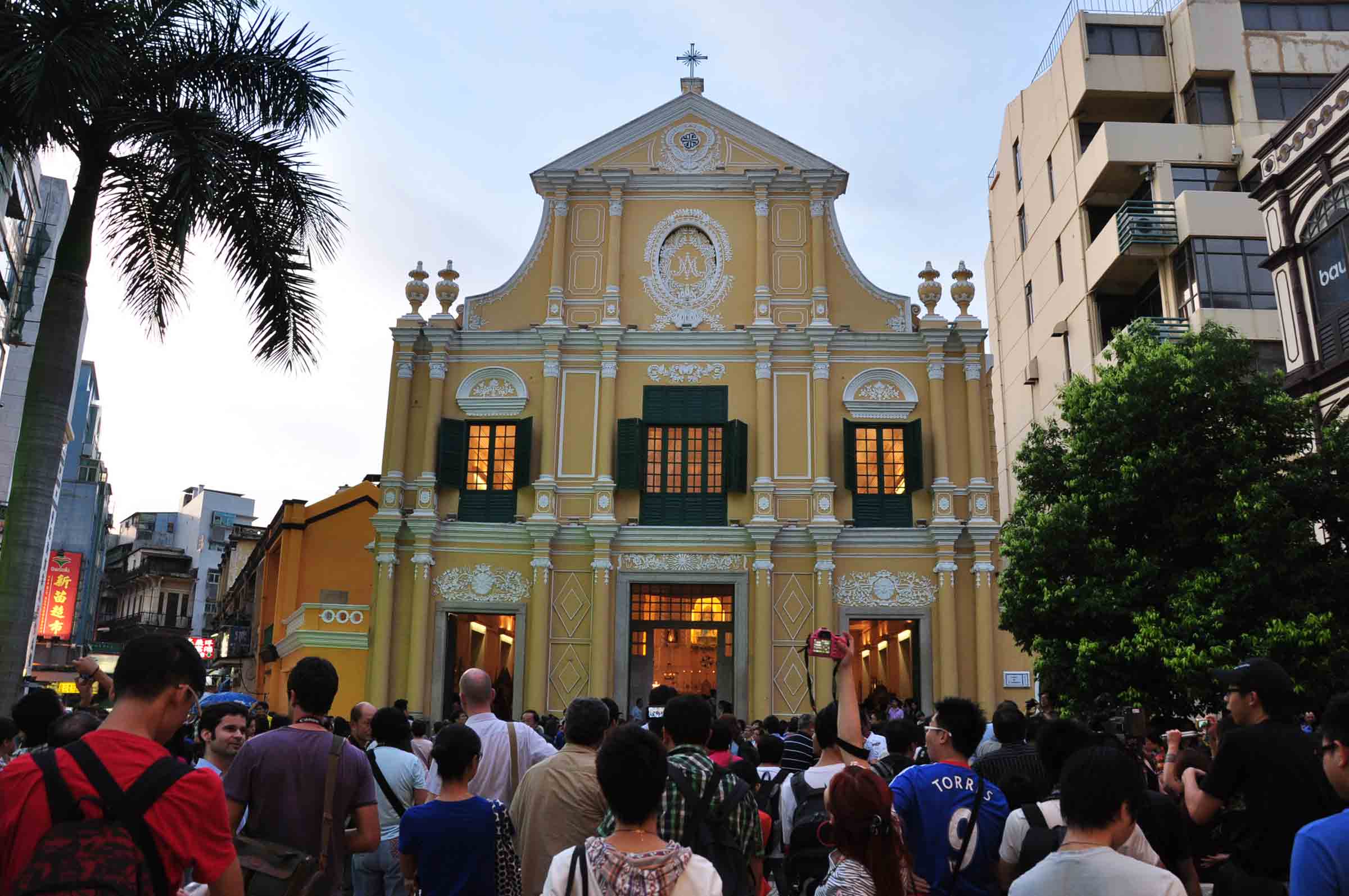 They parade her statue and banners through the streets of the city, starting from St. Dominic’s Church and ending at Penha Church. 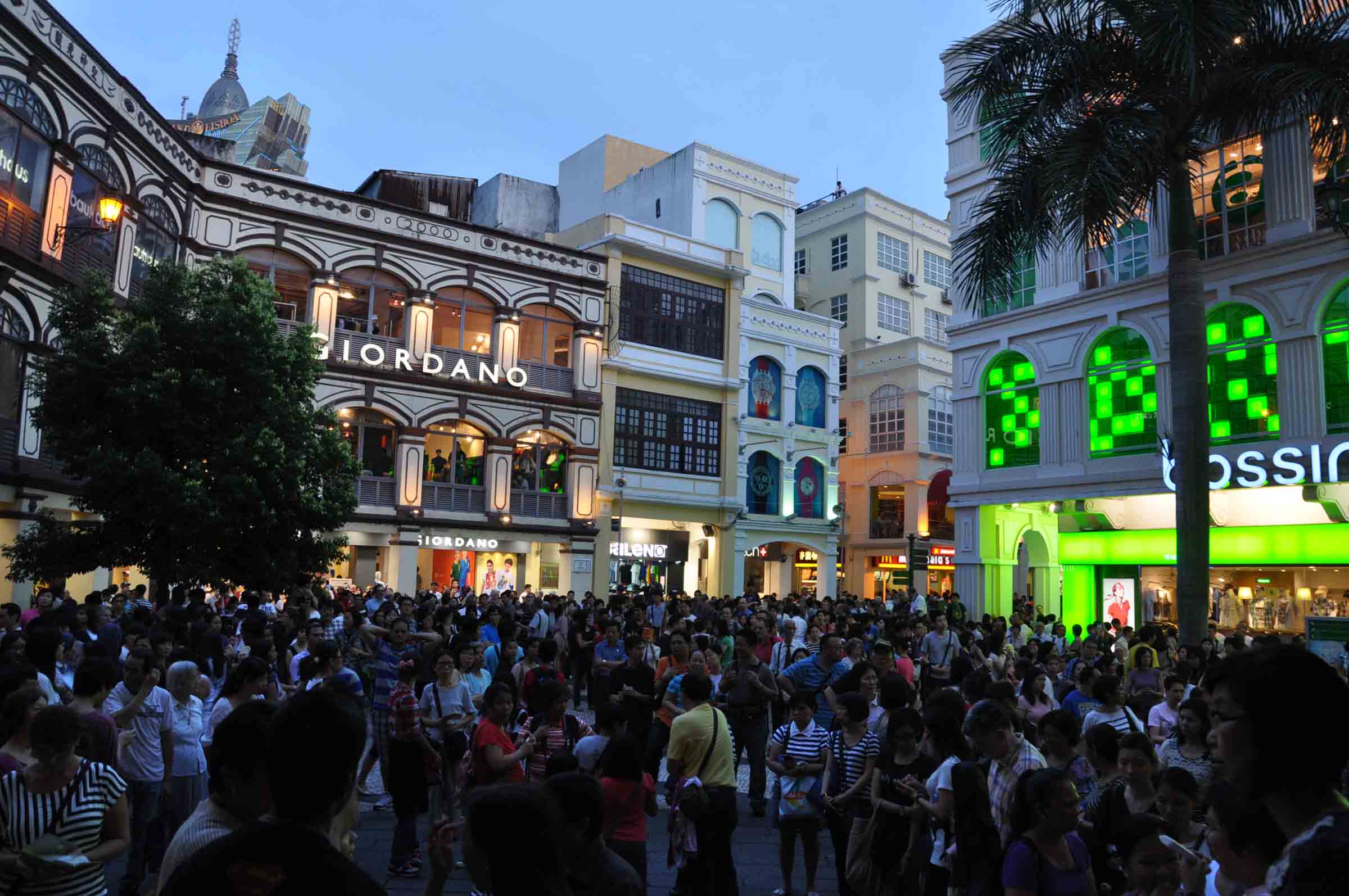 The festivities in 2012 began at about 6:15 pm inside St Dominic’s Church.  Senior members of the clergy addressed a packed church speaking a language I didn’t understand, but assumed was Cantonese with some Portuguese mixed in. 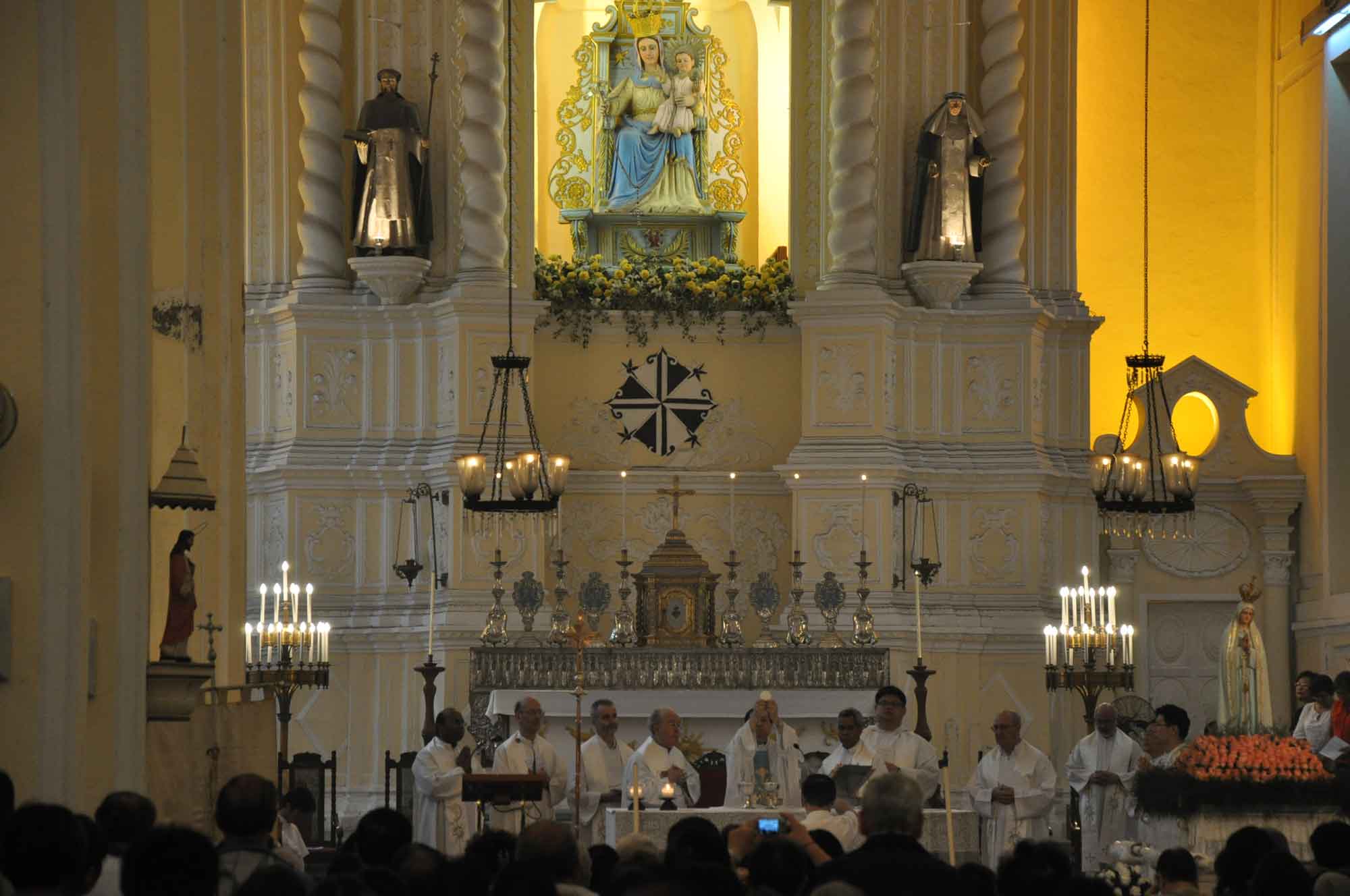 During the service they led the congregation in prayer, raised ceremonial cups and relics, and prepared the Virgin Mary for her night on the town. 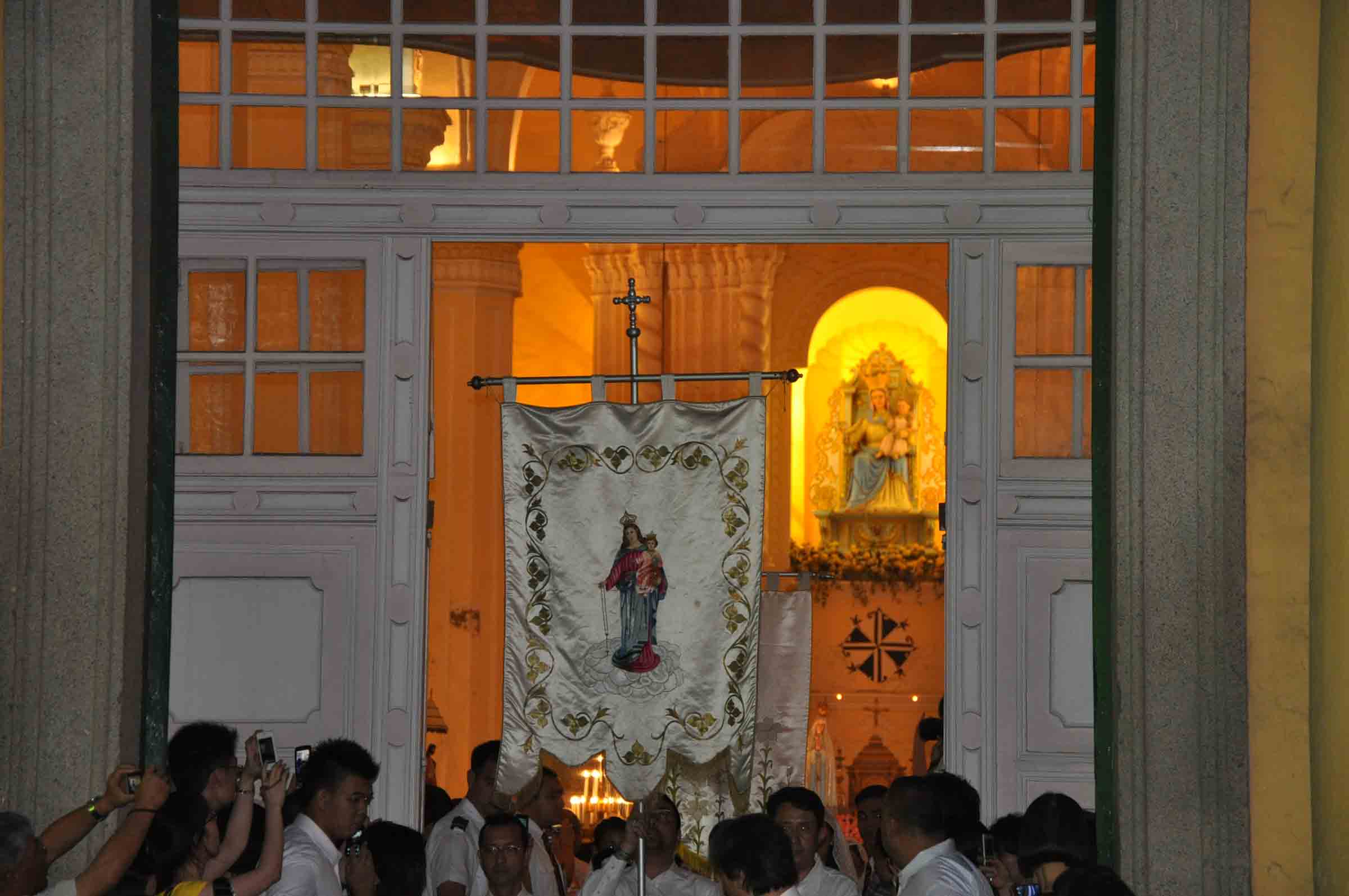 At 7:10 pm she exited the church doors, set to meet the massive crowd that had gathered to await her arrival.  For most they were only there to snap a few pics and then leave, but others joined in with the procession, faithfully following her all the way out to Penha Church. 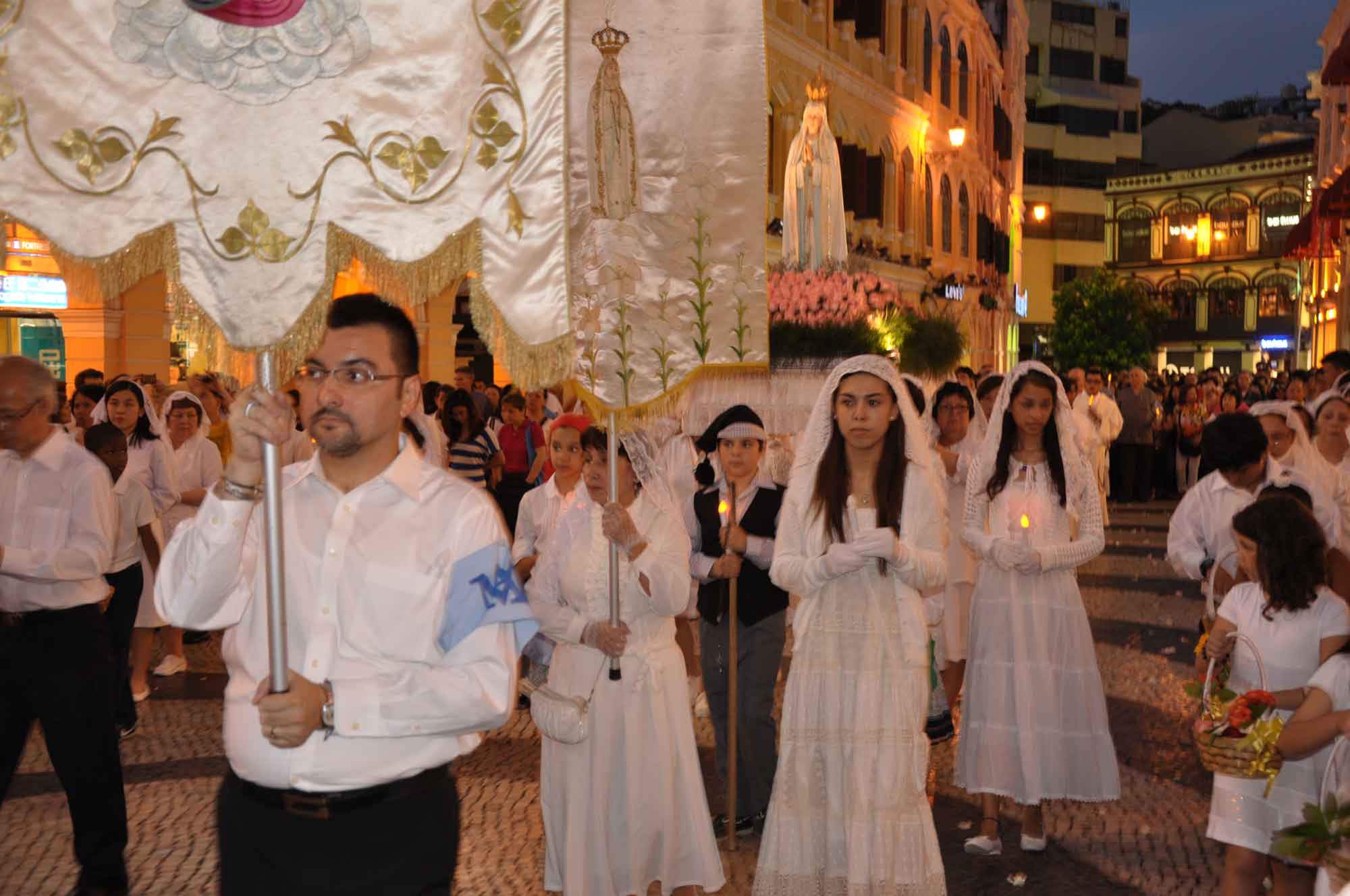 After reaching the Tourist Office, they hung a quick left and proceeded toward Cathedral. 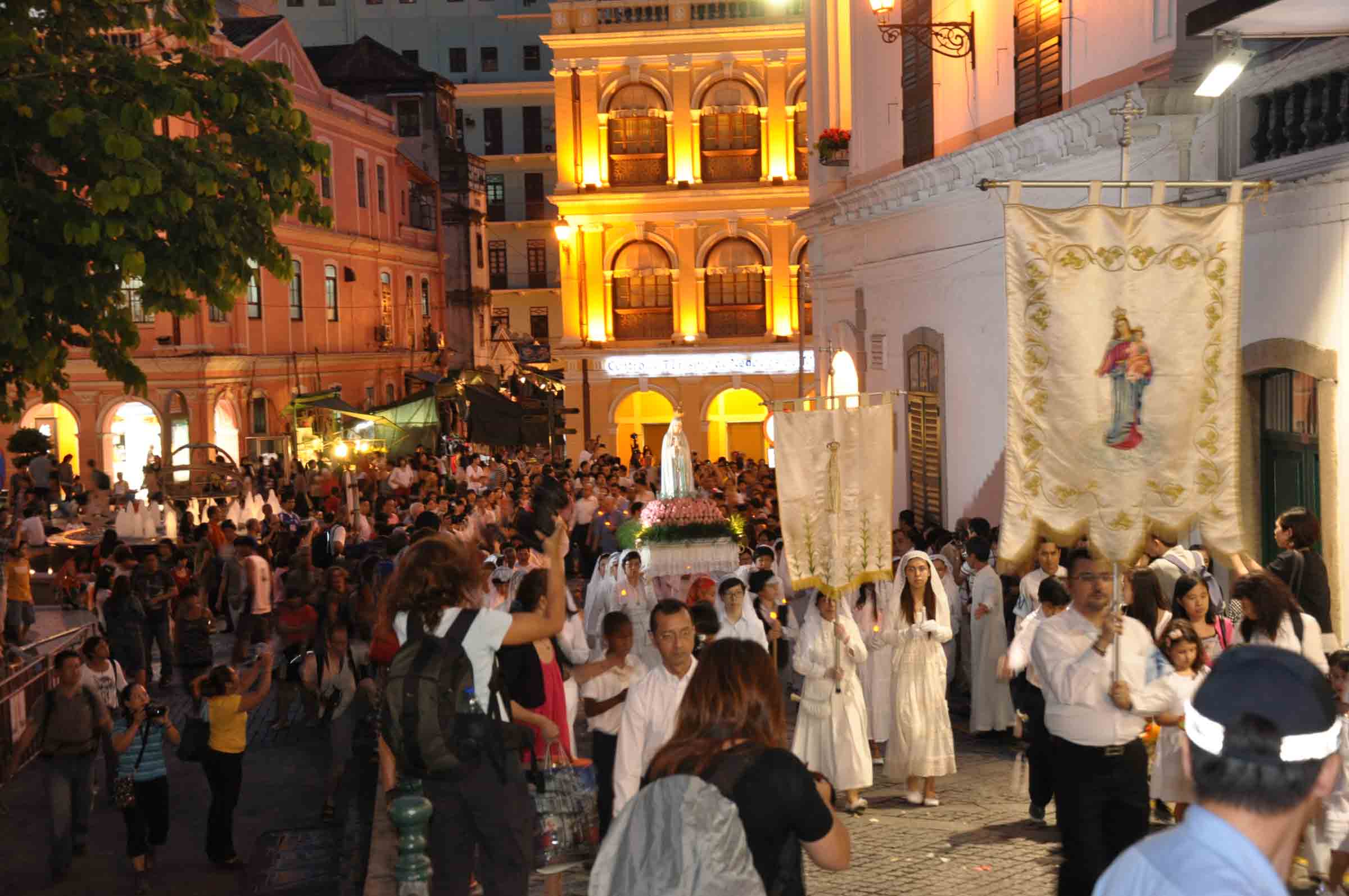 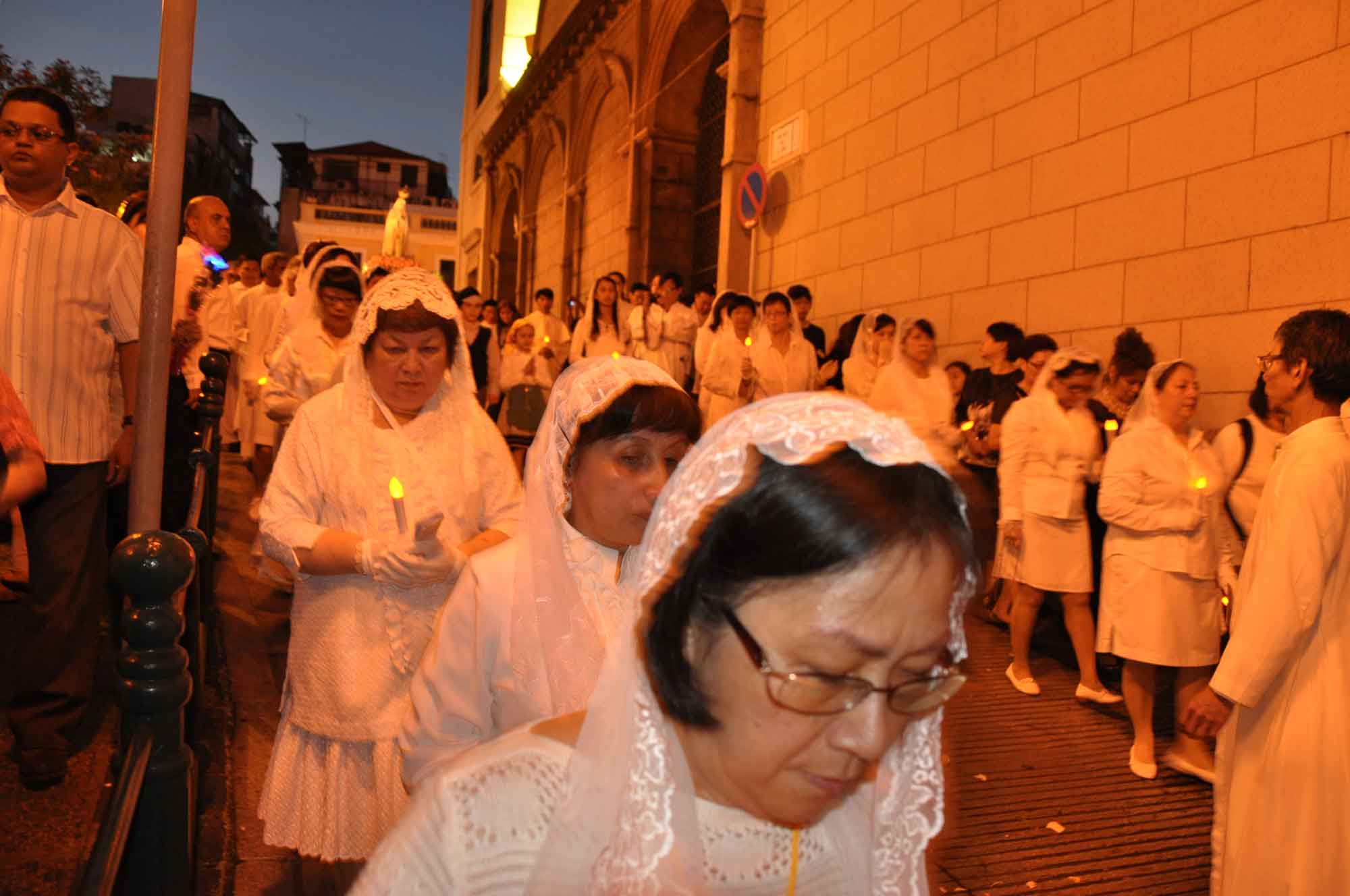 Right around this point, I got caught up in the giant scrum of humanity and couldn’t get back up towards the front.  So I cut bait for the Praia Grande, waiting for them to join up with me again. 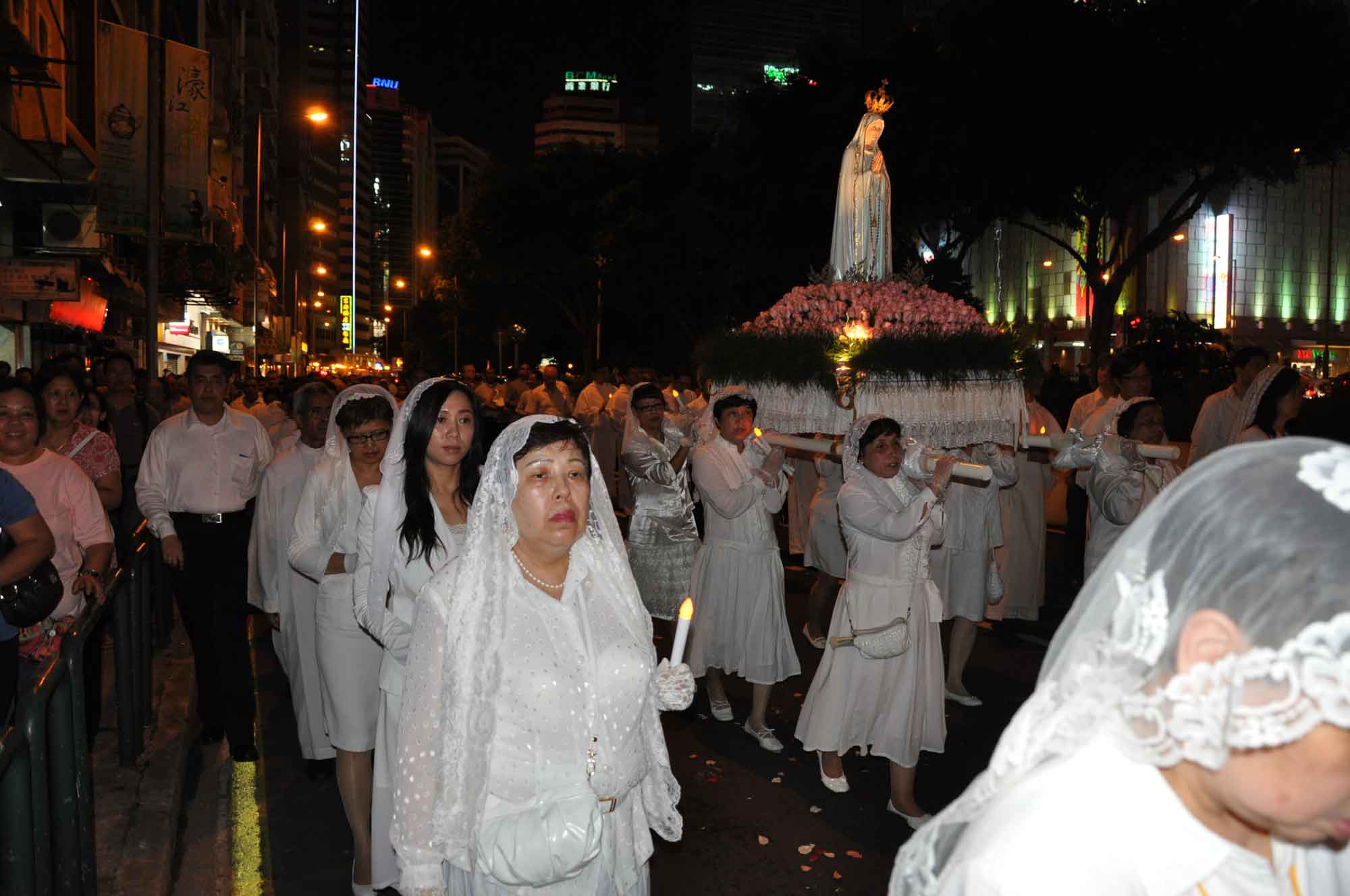 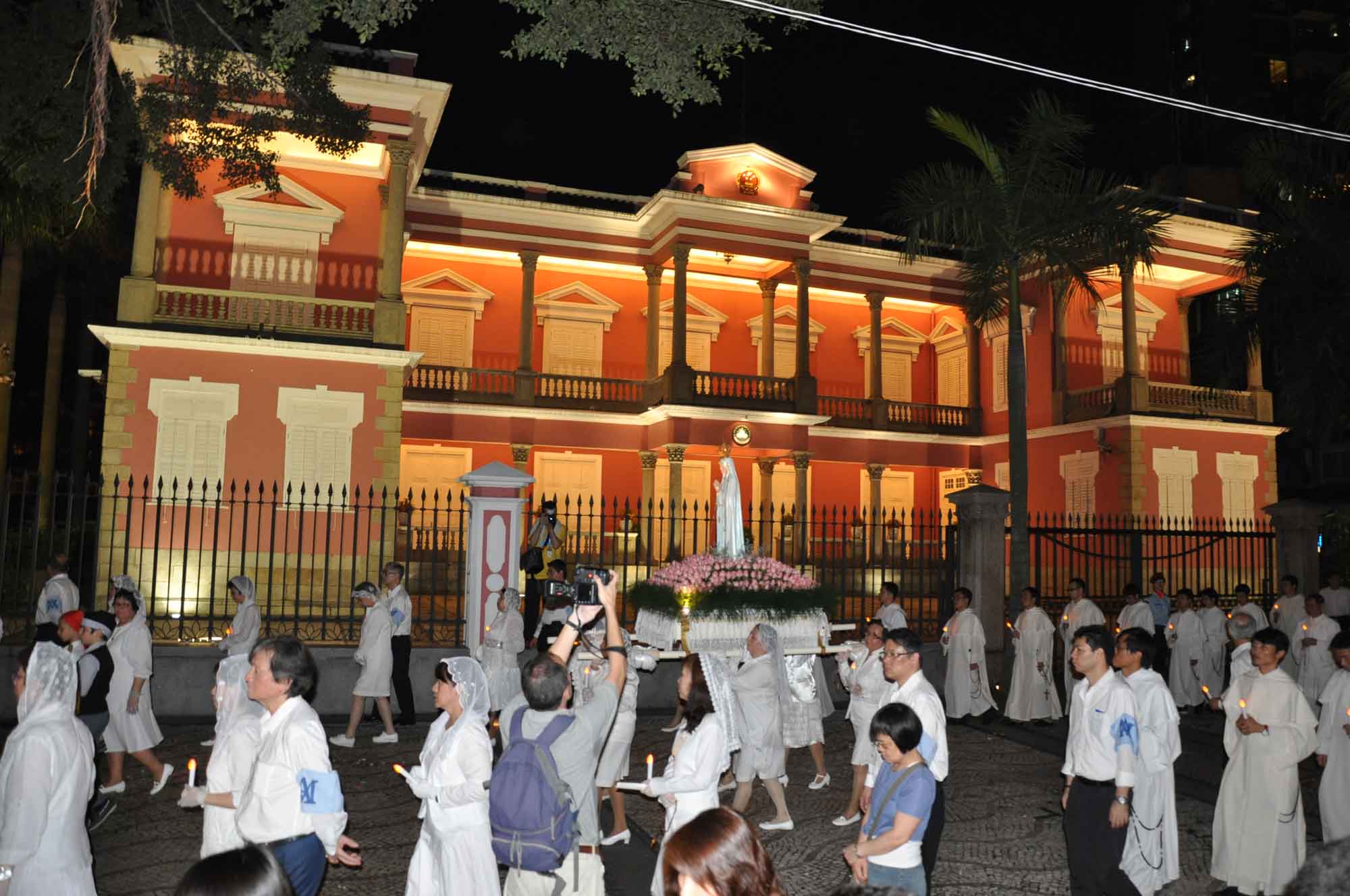 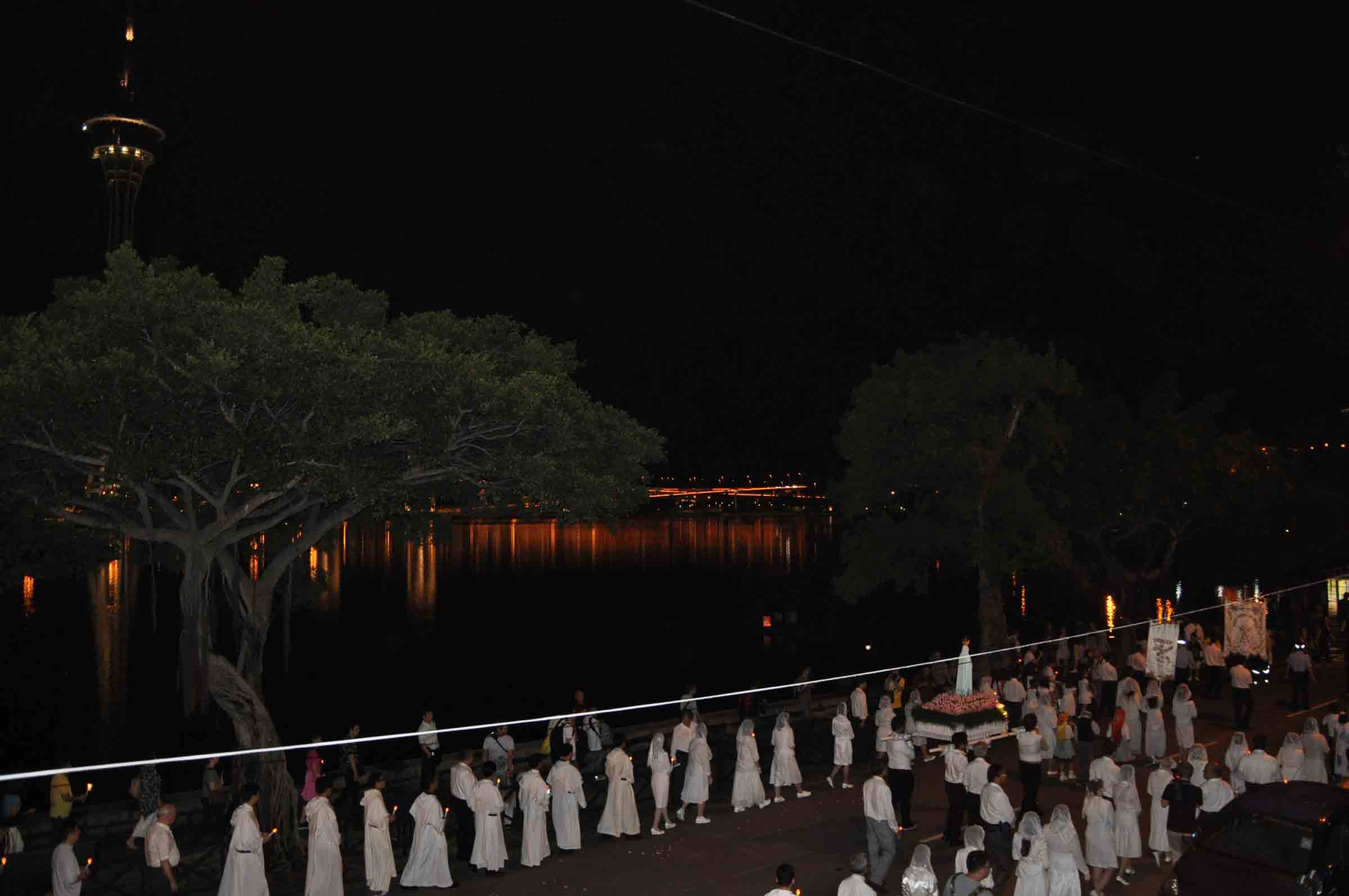 By the time the procession reached Penha Hill at 8 pm, the journey through those narrow streets turned very intimate.  Gospel music could be heard playing from somewhere, leading some believers to sing as they walked.  Later the music changed to a serious of spoken prayers, alternating in English and Cantonese. 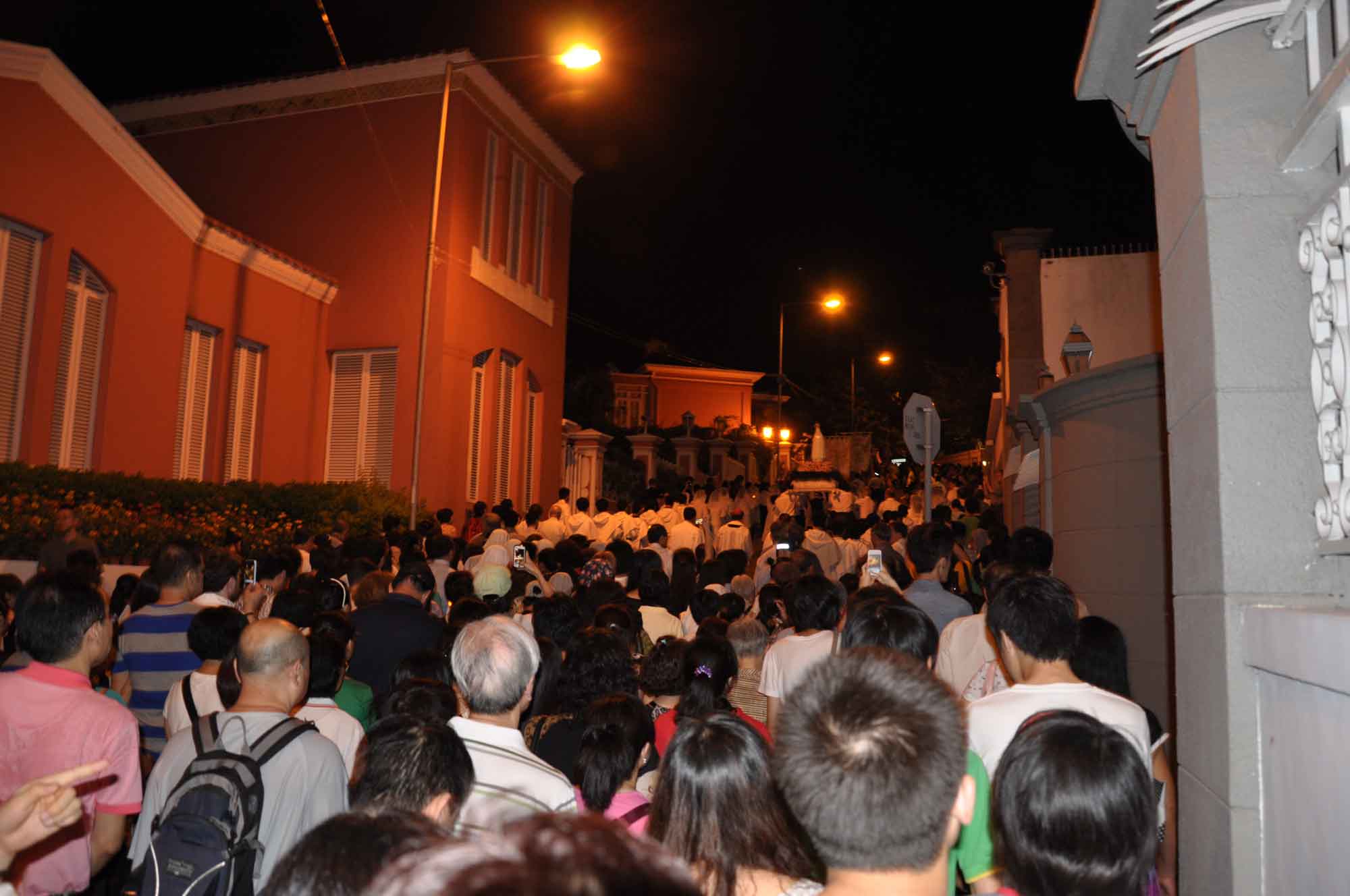 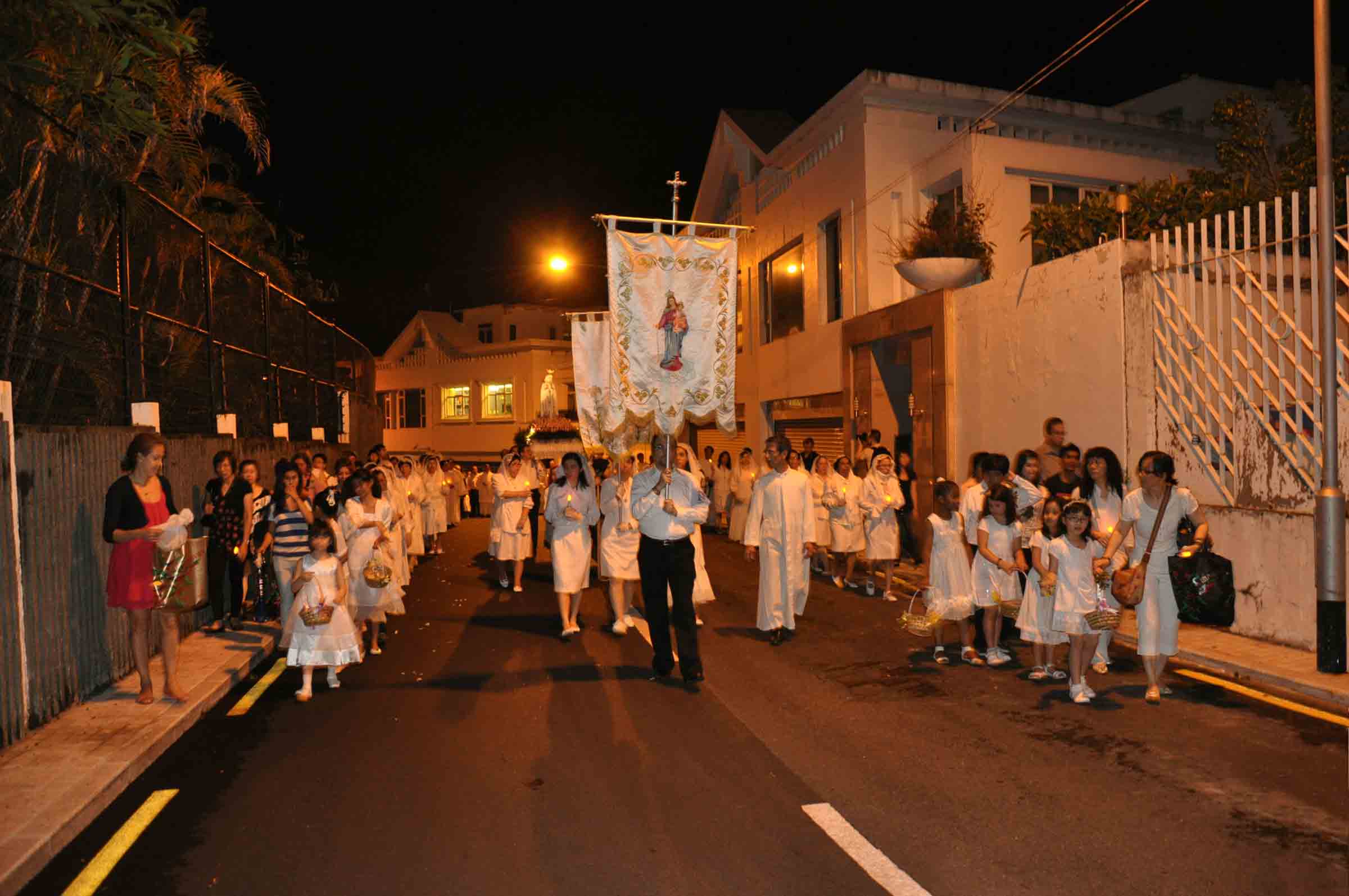 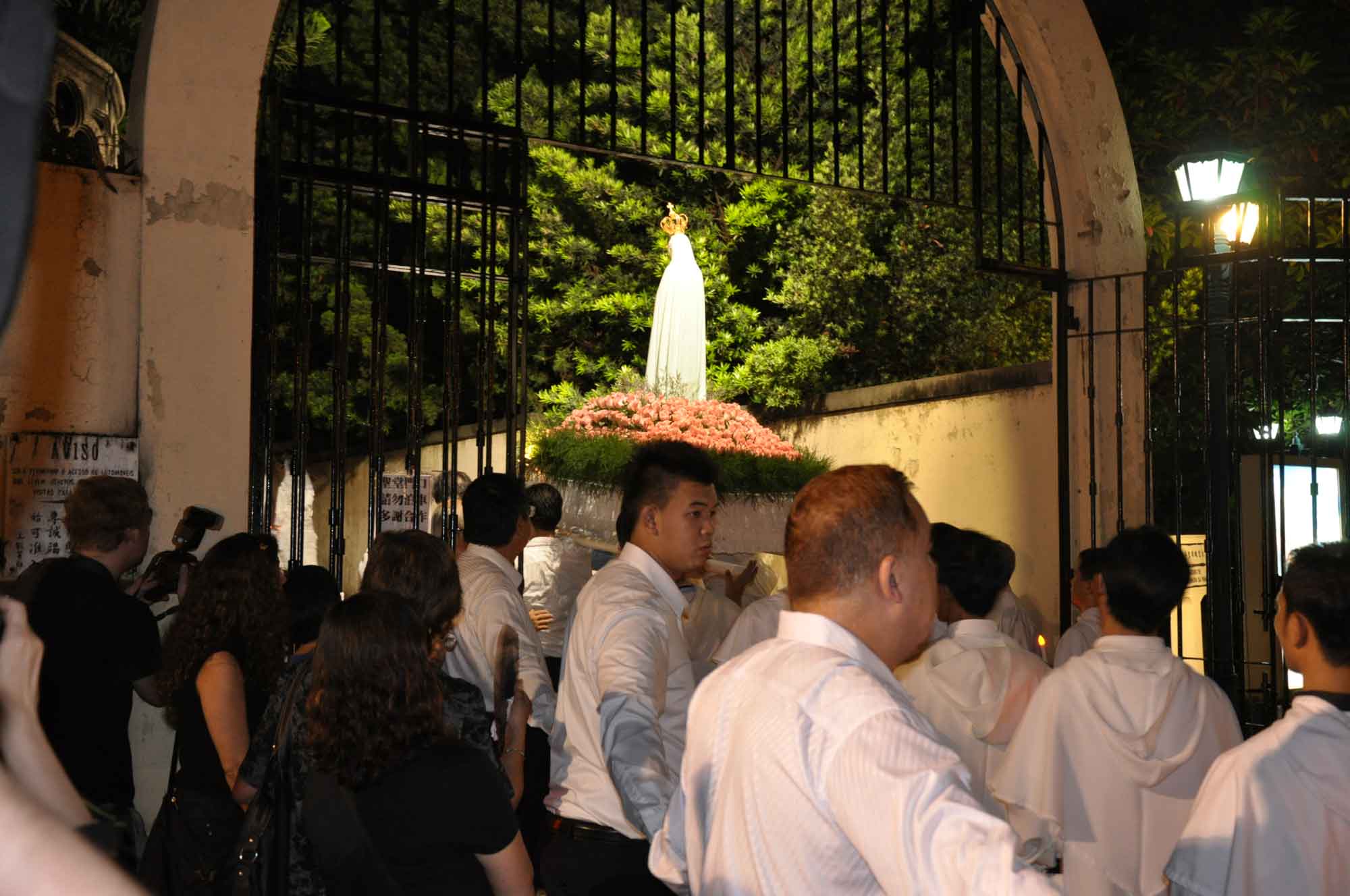 At 8:16 pm the Virgin Mary entered the gates of Penha Church, where an audience waited.  It was probably half the size of the one that had filled up St Dominic’s Church, only an hour before.  A brief outdoor mass was held, highlighted by the head priest walking over to the Macau skyline and saying a prayer to bless the city. 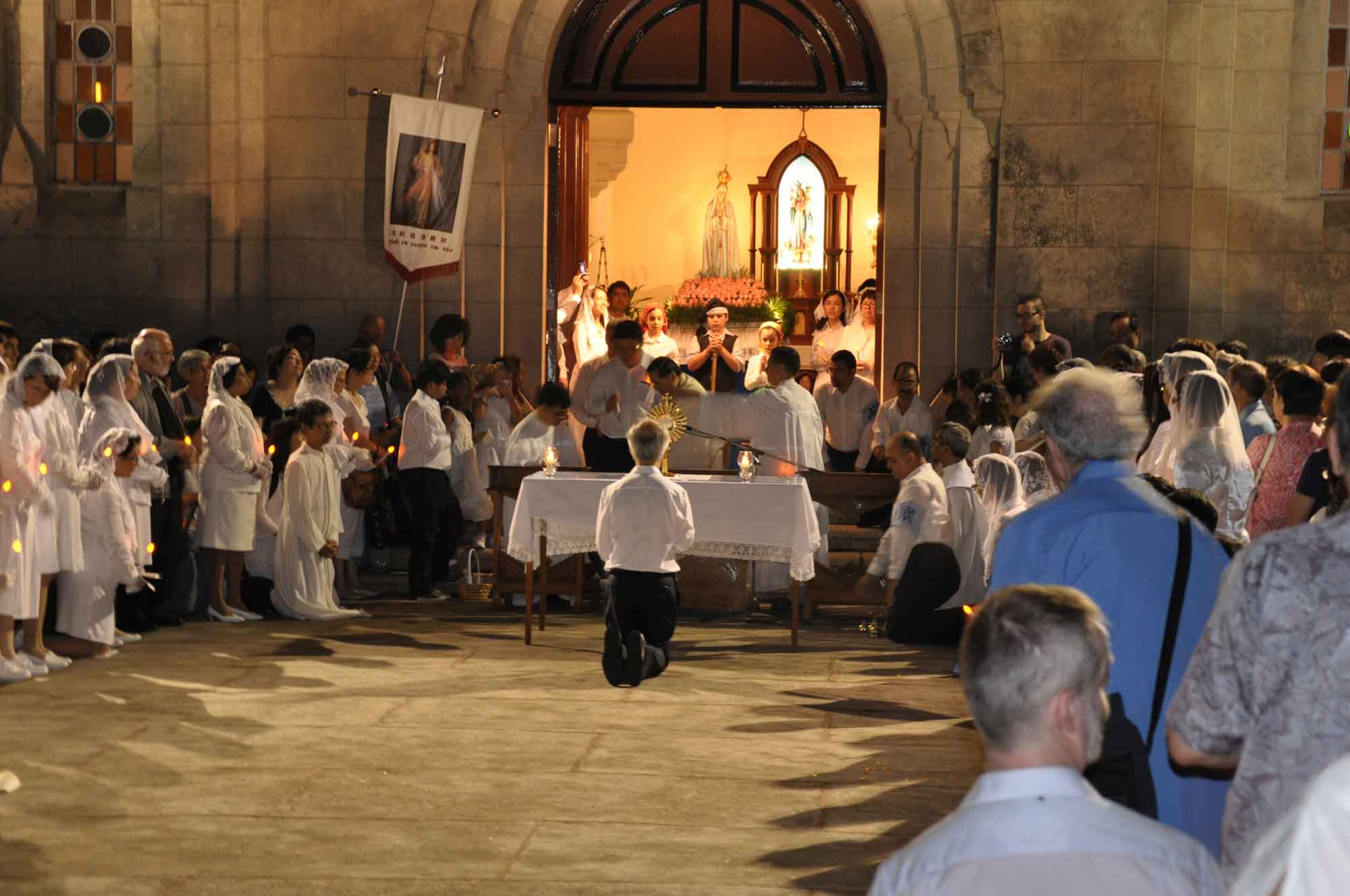 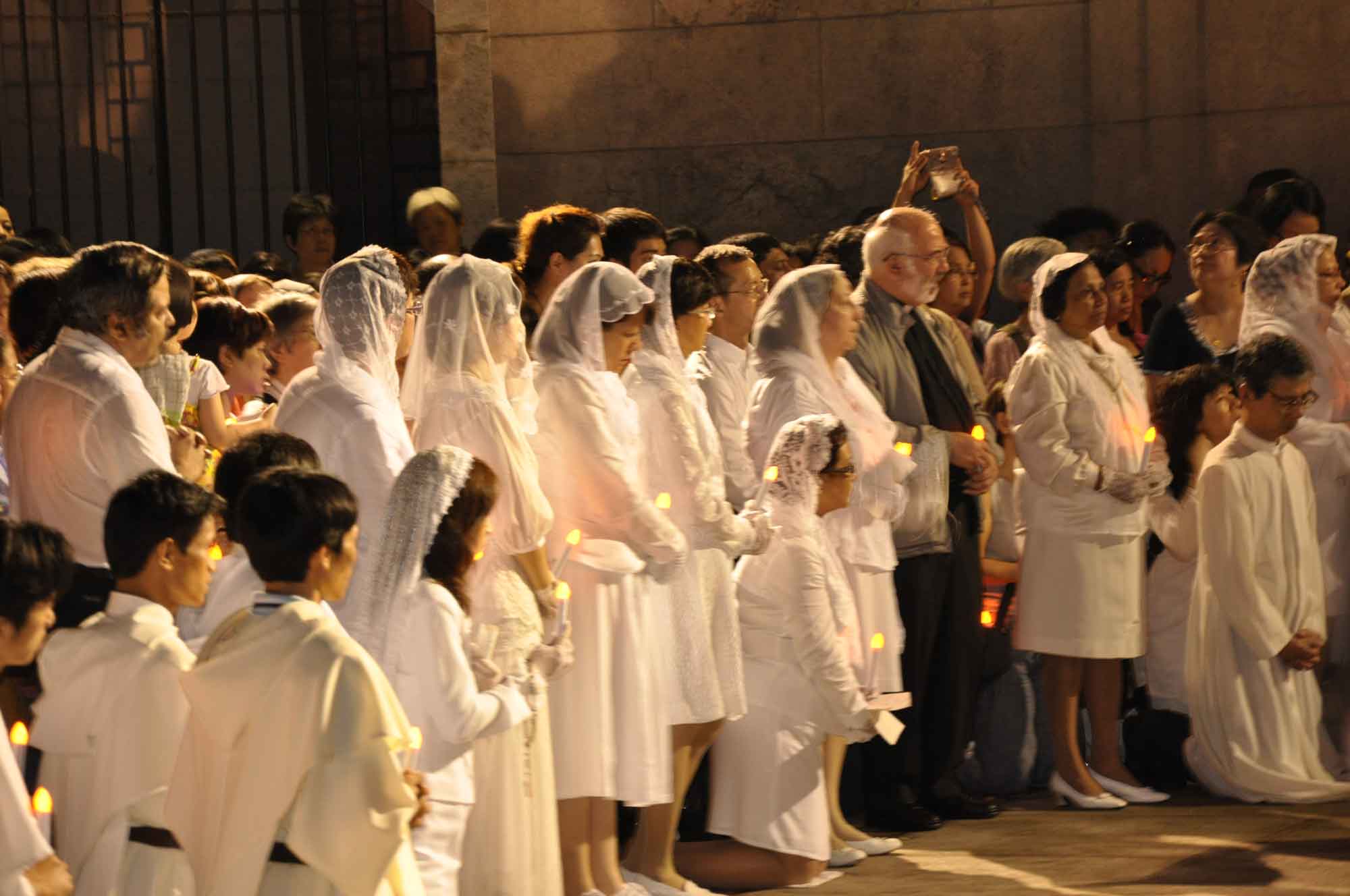 At 8:37 pm the Virgin Mary was carried into Penha Church, her trip complete. 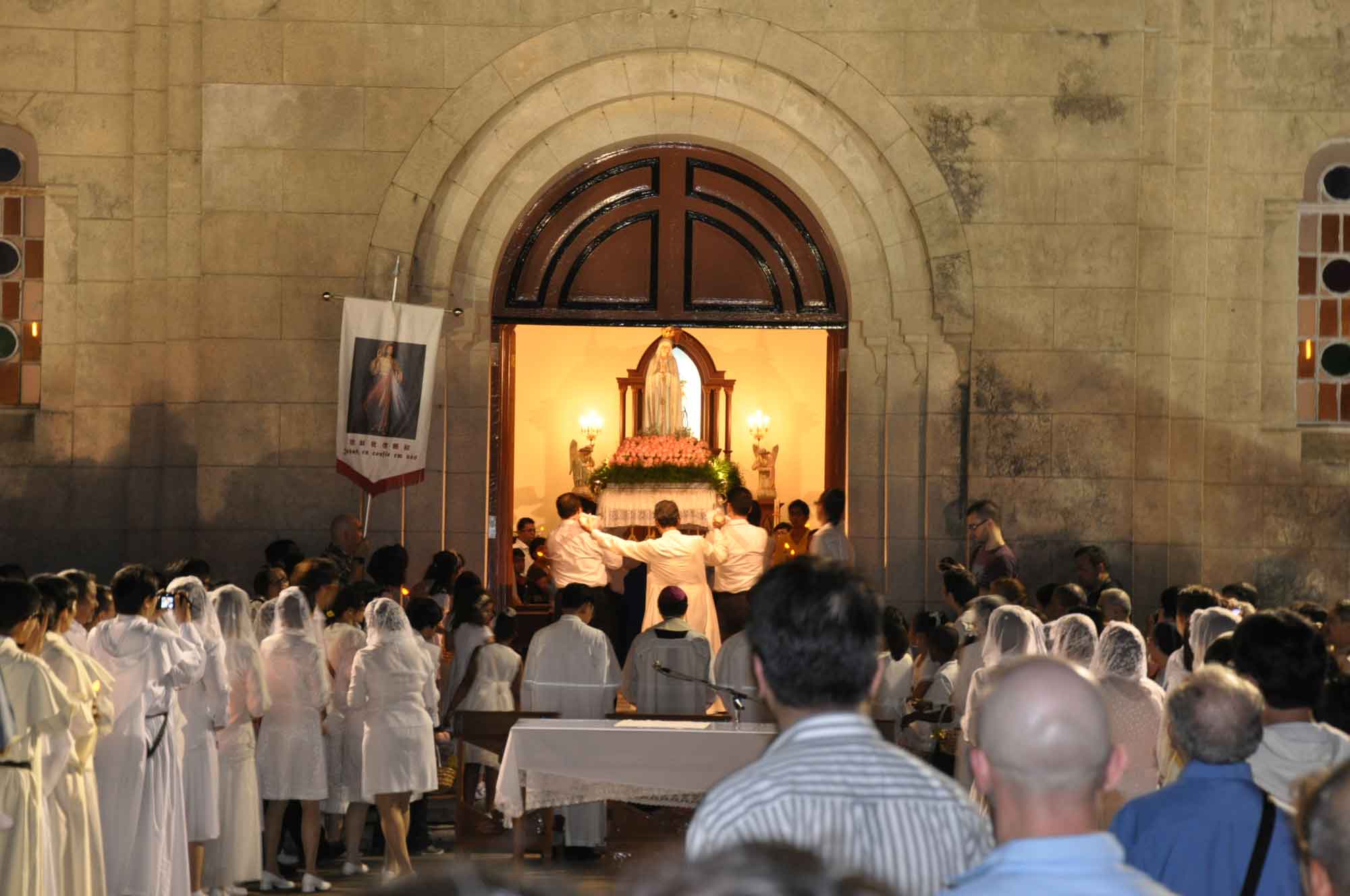 *** On May 17, 2017 Macau celebrated the 100 year anniversary of the apparitions in Fatima.  To have a look at the Procession, which started from a different church and was a lot busier than the one in 2012, please follow the link to the Photobook: 2017 Our Lady of Fatima.