Day 3 would begin by checking out the Masters of Ink Exhibition at the Venetian, followed by an egg tart lunch at Lord Stows.  From there we’d check into our new hotel, the Pousada de Coloane, way down in Coloane, then scope out the action at Hac Sa Beach.  It would all end with a Japanese buffet dinner at Altira’s Kira.

The Masters of Ink Exhibition at the Venetian featured 90 traditional ink paintings from the best Chinese artists of the past 150 years, including works from noted masters Qi Baishi, Wu Guangzhong and Li Kuchan. 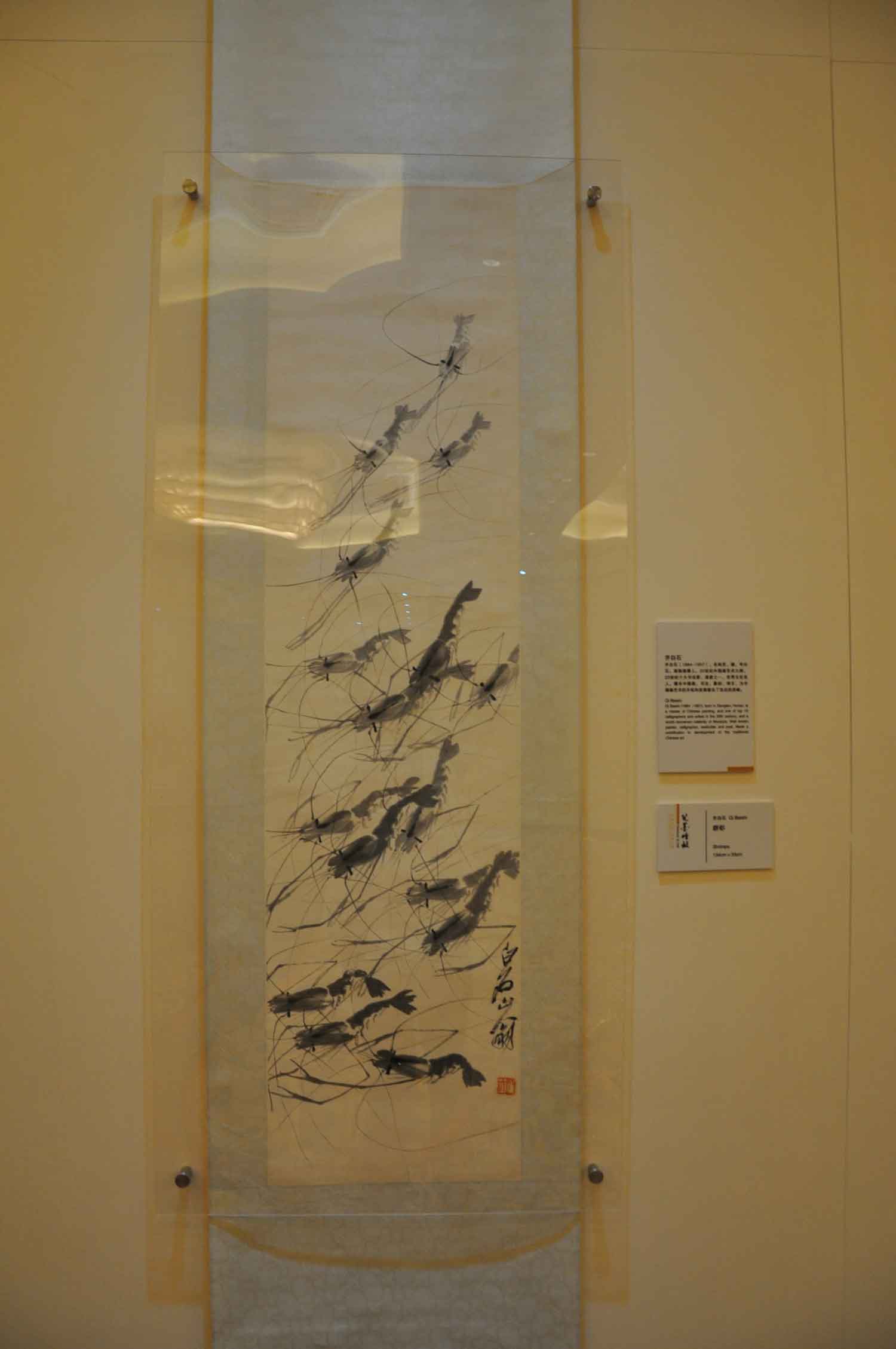 The paintings had an estimated worth of over 80 million RMB or 13 million US dollars, making it quite a serious collection. 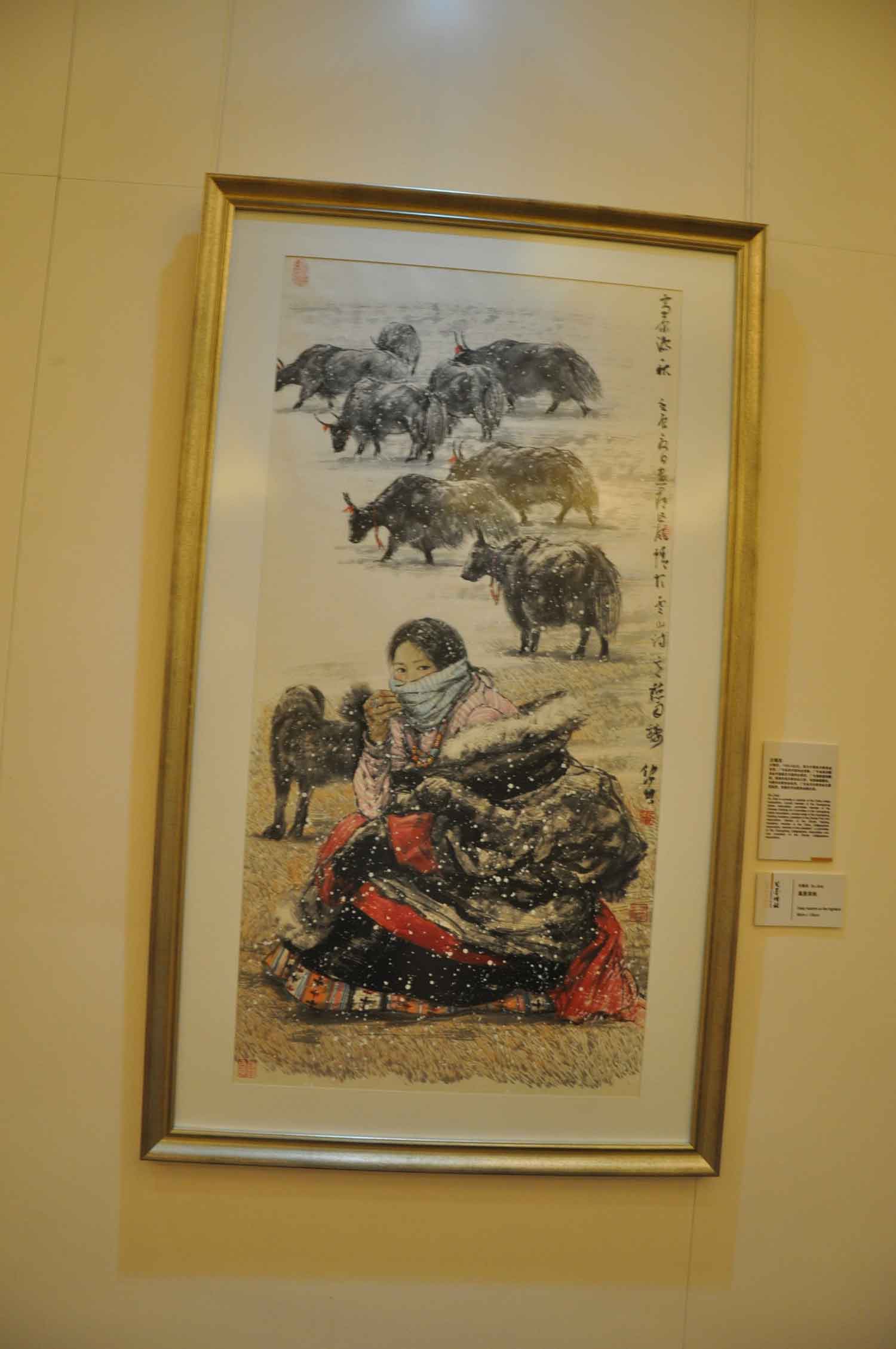 Ink painting in China dates back to the 5th Century and is one of the most demanding art forms in the world.  Simply put, ink painters don’t get a second chance – once a brush stroke is laid down upon the paper, it can’t be altered or erased afterwards. 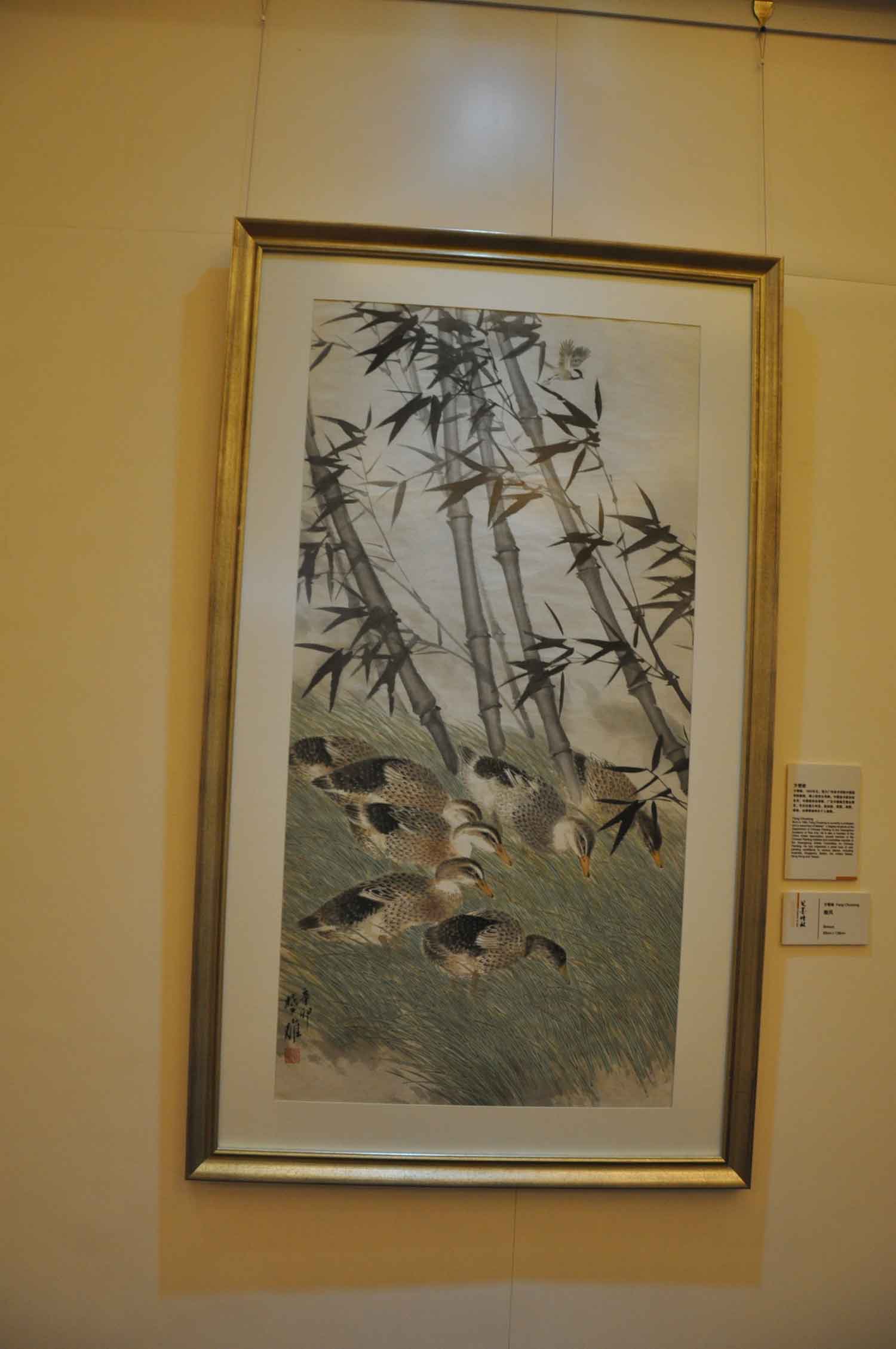 The aim of ink painters is to capture the soul and essence of the subject they’re drawing, therefore they’re not always so concerned with producing the most realistic portrayal. 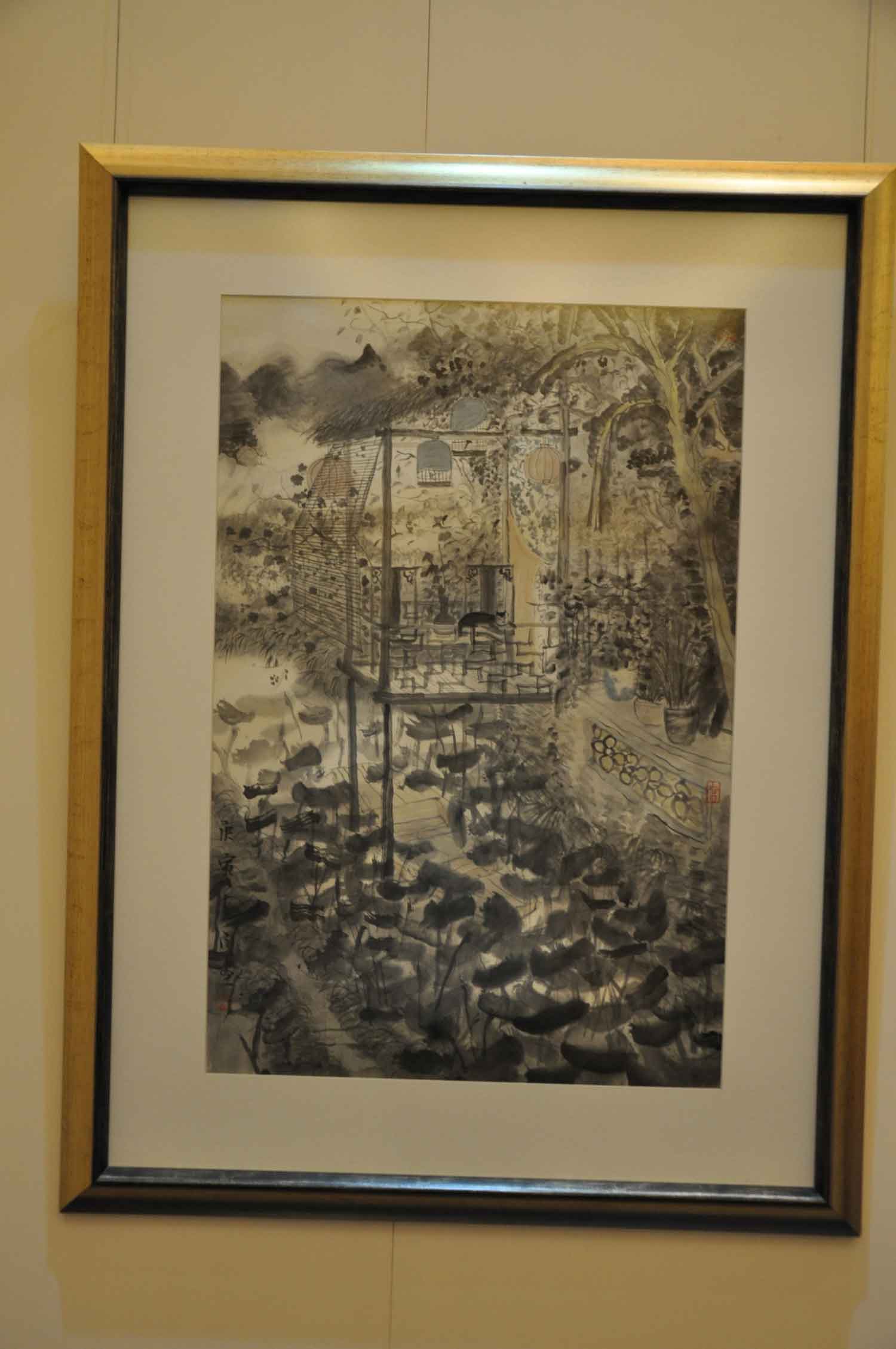 In that way, I’d say there were well ahead of Western artists by about 1500 years. 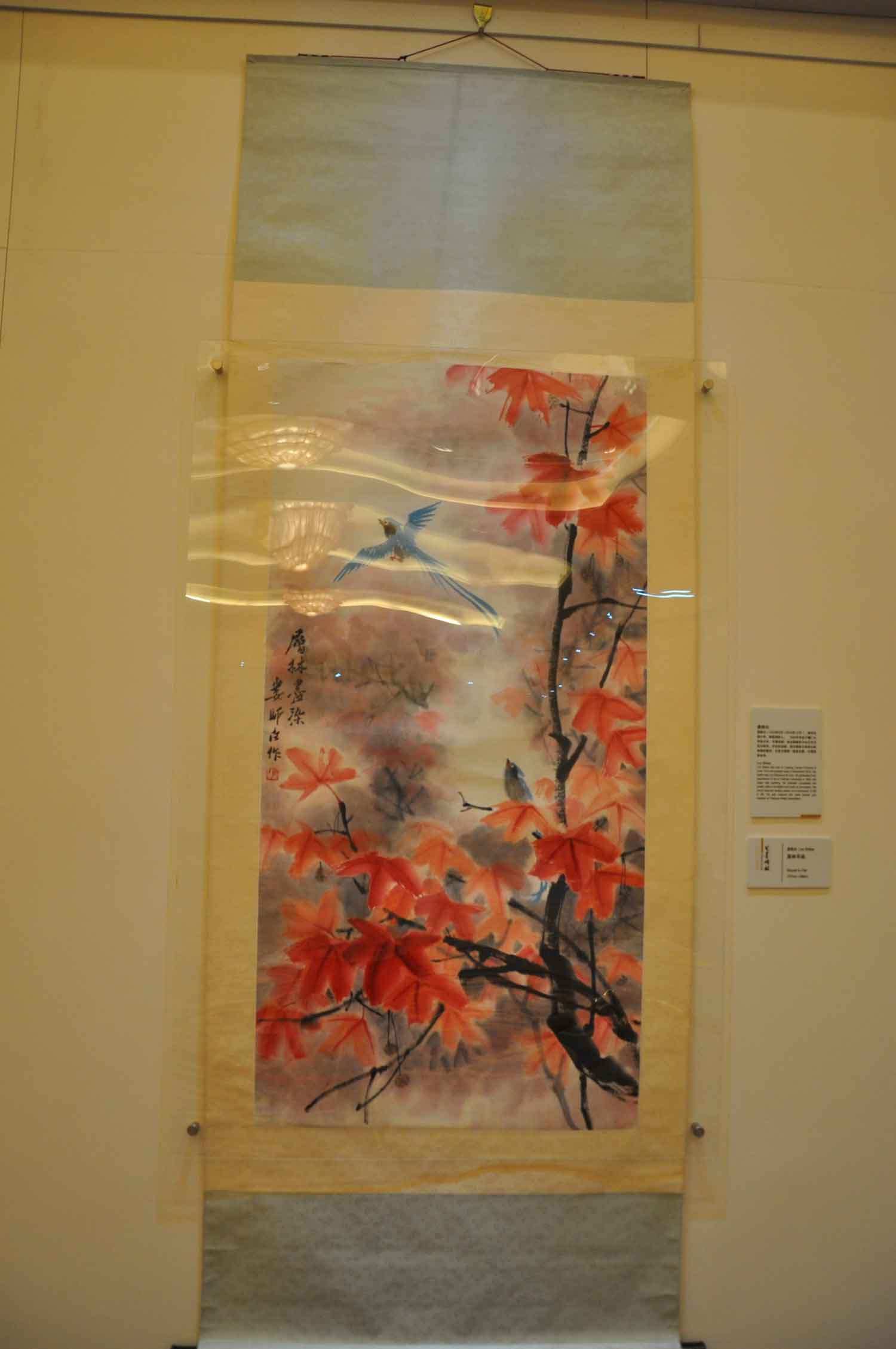 As Mu Yi and I were walking around, a Hong Kong gentleman seemed a little disappointed by what he was viewing.  He made a comment that Chinese art was much simpler than Western art, and therefore maybe not as good. 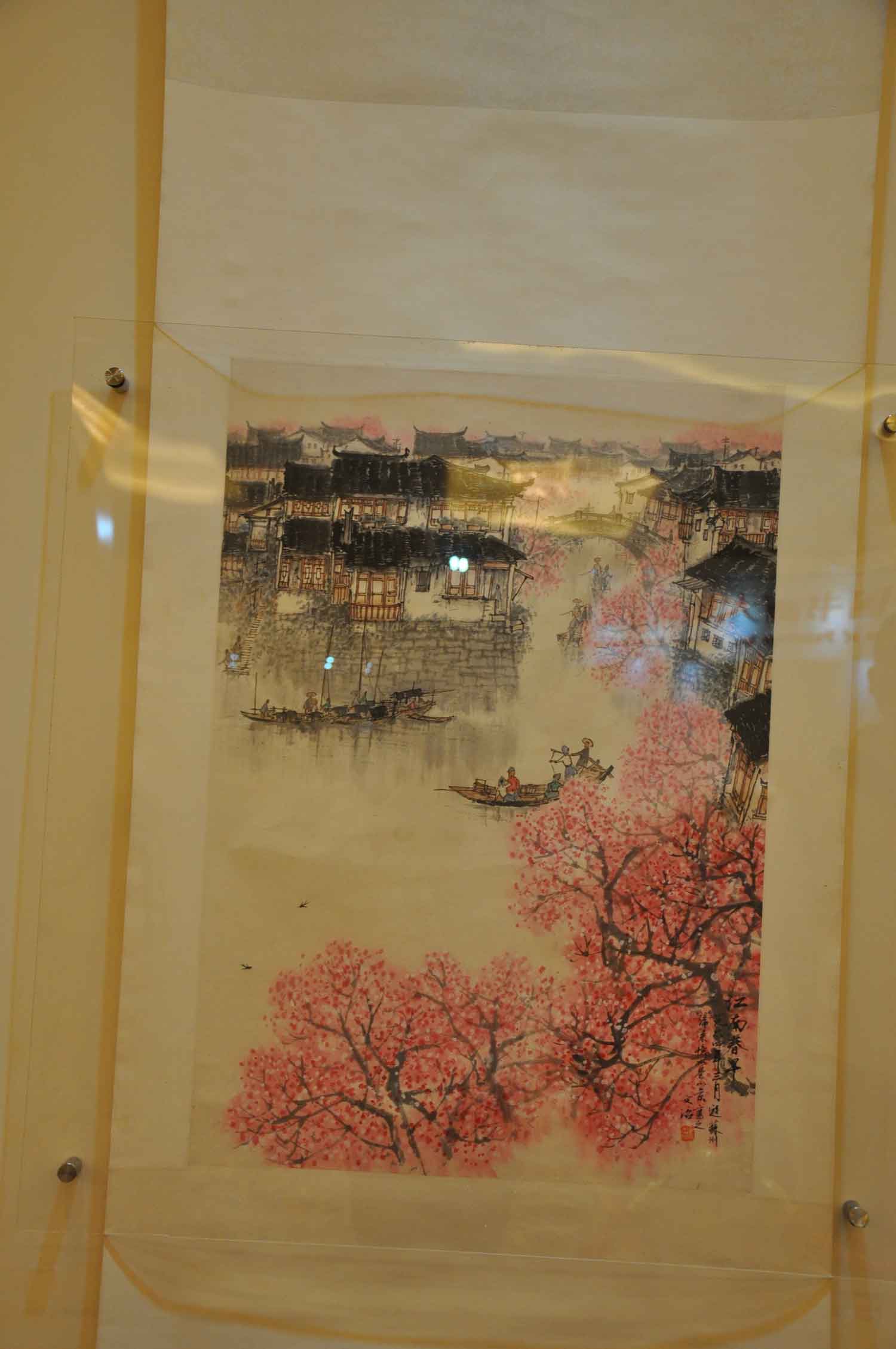 I didn’t think so because all the same basic elements of art still apply for a Chinese ink painting, namely composition, colour, space, line, and shape.  While it may be presented in a more essential manner, that doesn’t make it any less artistic. 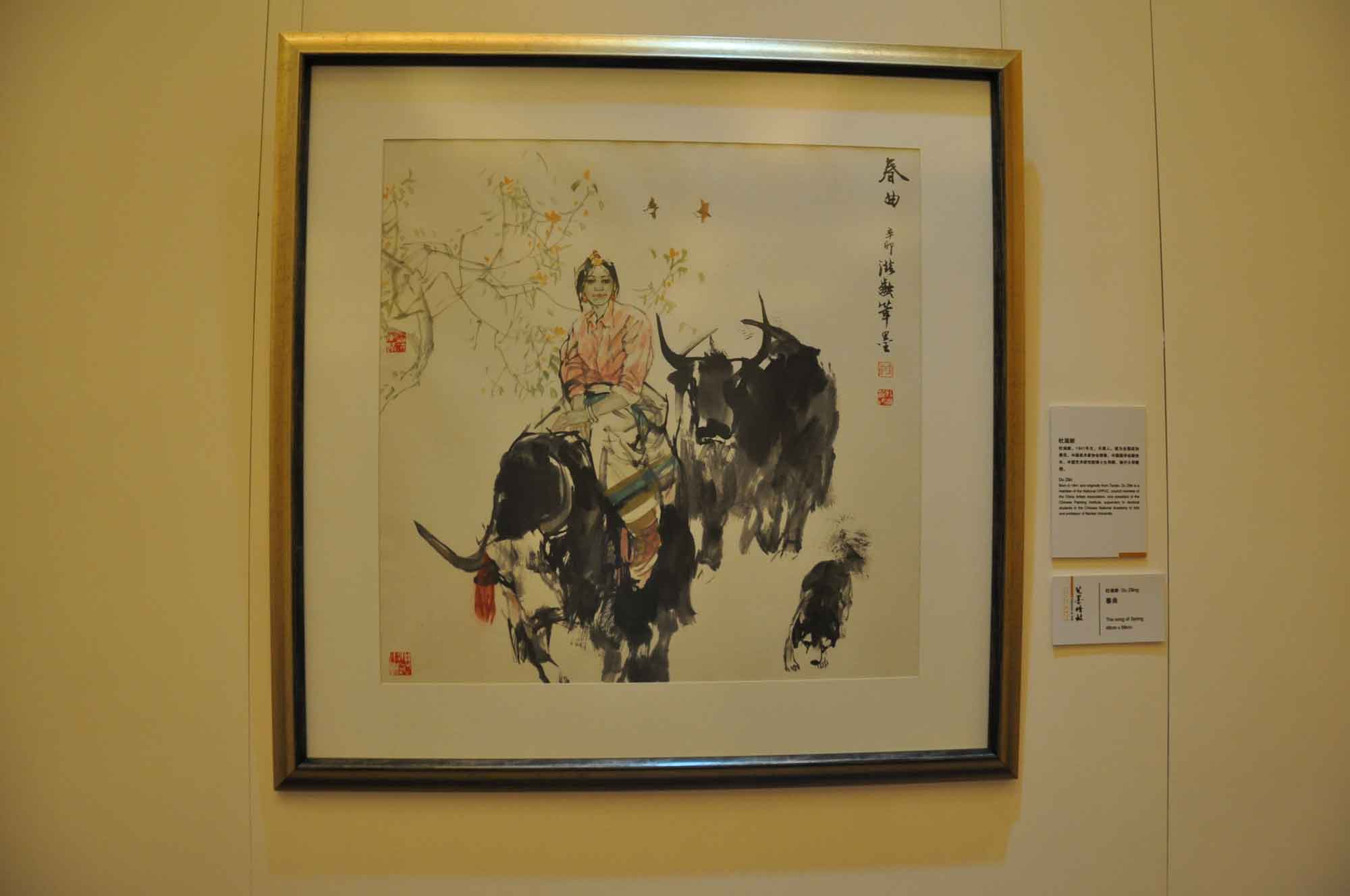 When the exhibition finished on the 21st it was branded a huge success by the organizers.  I can’t remember exactly how many visitors there were, but I think it was well over 10,000.  Promises were made to hold similar kinds of art exhibitions in the future, so make sure to visit the Venetian website when you’re in town to see if anything is on.  The price was obviously right, since Mu Yi and I didn’t pay a dime to get in, it was all free.

Afterwards, lunch was calling so we hopped the 26A bus down to Coloane Village to sample one of Macau’s sweetest inventions.

I don’t know what the most famous Macau snack is, but egg tarts would have to be near the top of the list.  I originally thought they had been a Macanese staple for hundreds of years, available since 1700 or some such time, but the truth is that they’re a relatively new invention, only having come into being in 1989.  They were the brainchild of someone who wasn’t even Macanese, or Portuguese, or Chinese for that matter, but rather an English expatriate named Andrew Stow, who came to Macau in 1979.

Nicknamed “Lord Stow” by the locals, Andrew conjured up the egg tart in 1989, the same year he opened Lord Stow’s Bakery in Coloane Village.  His trick was to take a traditional Portuguese egg tart and instead of filling the inside with some combination of flour and water, he used an English style cream instead, a match made in heaven!  Within a few years, Mr Stow’s egg tart swept through all of Asia and today you can buy one in Hong Kong, Taiwan, Japan, and the Philippines.  Unfortunately, Mr Stow passed away from an asthma attack in 2006, a young man of only 51.  Today his sister and cousin run Lord Stow’s Bakery, which now has two or three outlets in Coloane Village along with another one in the Venetian. 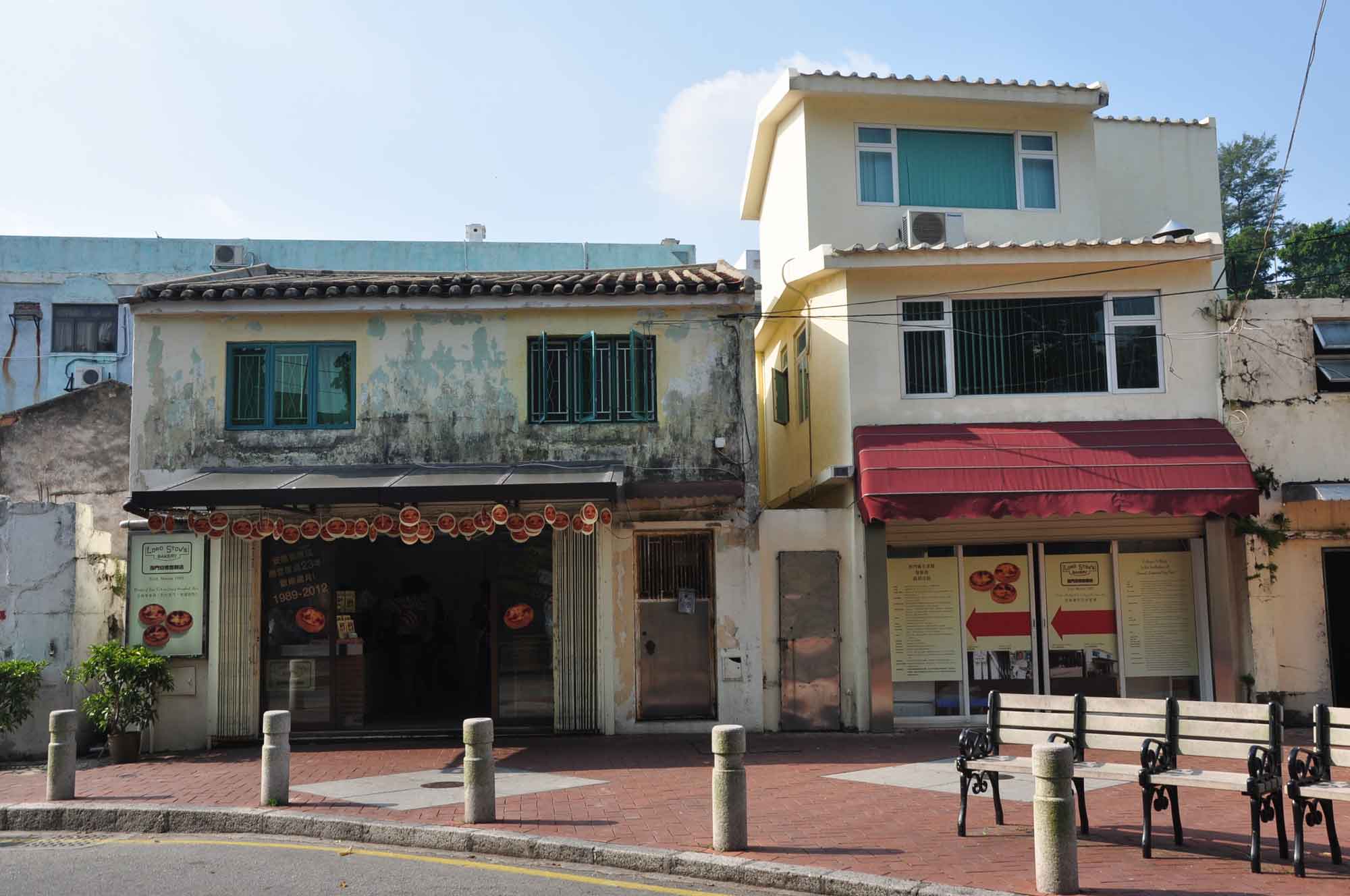 While most large bakeries in Macau produce egg tarts today, Lord Stow’s and Margaret Cafe’s are considered the top two.  It’s probably no coincidence that Margaret is in fact, Andrew’s ex wife, and she probably took to making egg tarts after their divorce, just to spite him.  If you compare them, Lord Stow’s egg tarts are definitely richer and sweeter, while Margaret’s aren’t as strong.  The only way to know which one is better is to try both of them yourself then make a decision.  For me, I still prefer the originals, and while I can’t say they’re any good for you, I can say that sin never is. 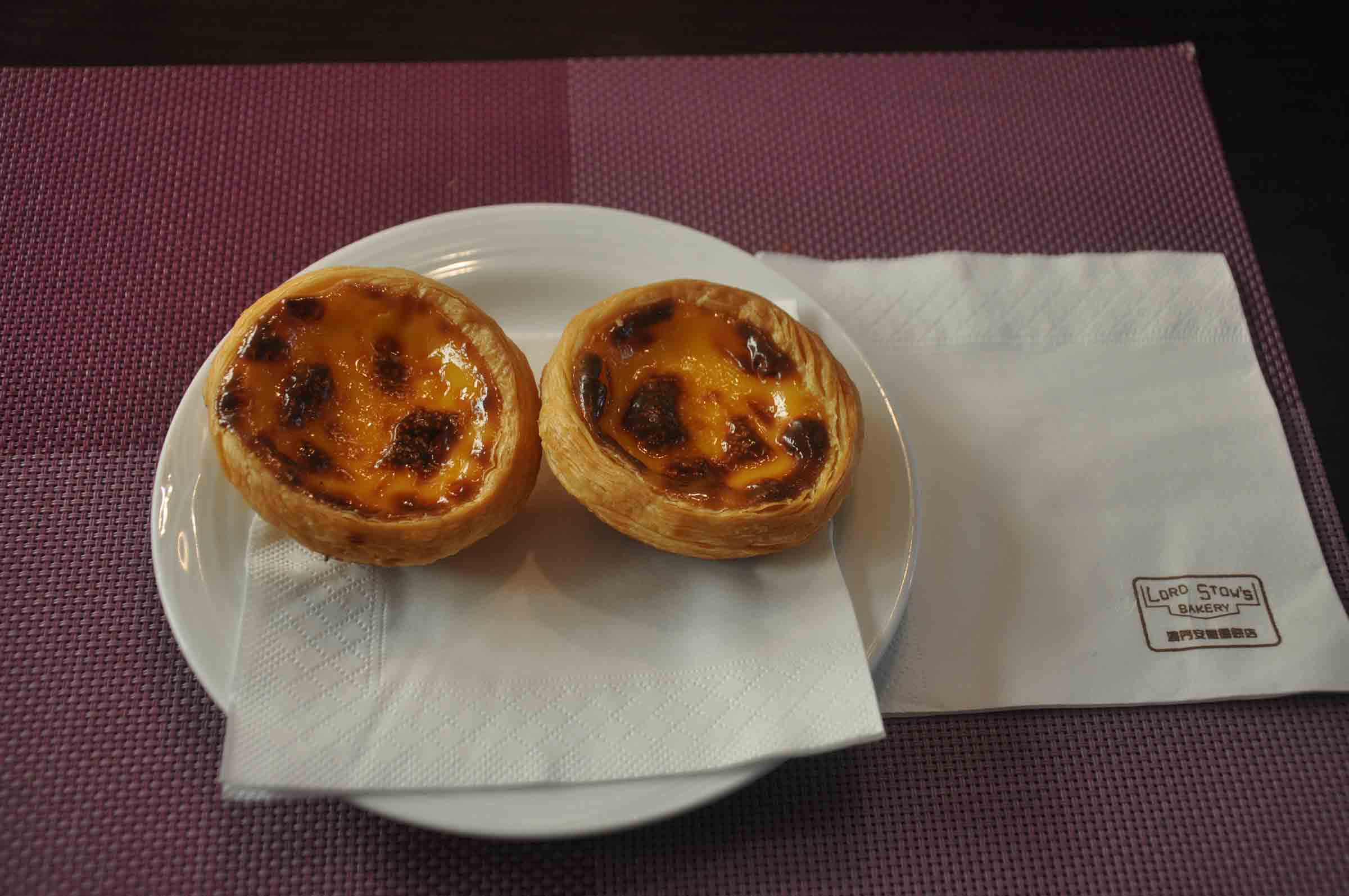 Mu Yi and I bought a box of 6 tarts which ran $45 in total then split them up fairly and evenly, which meant four for me and two for her.  If you just want to buy single tarts, they’re $8 per piece.  A box of 12, meanwhile, is $90.  All in all, they don’t make a bad lunch.  Every time I have three or four of them, I don’t have to eat again for 6 hours.

From one Pousada to another. 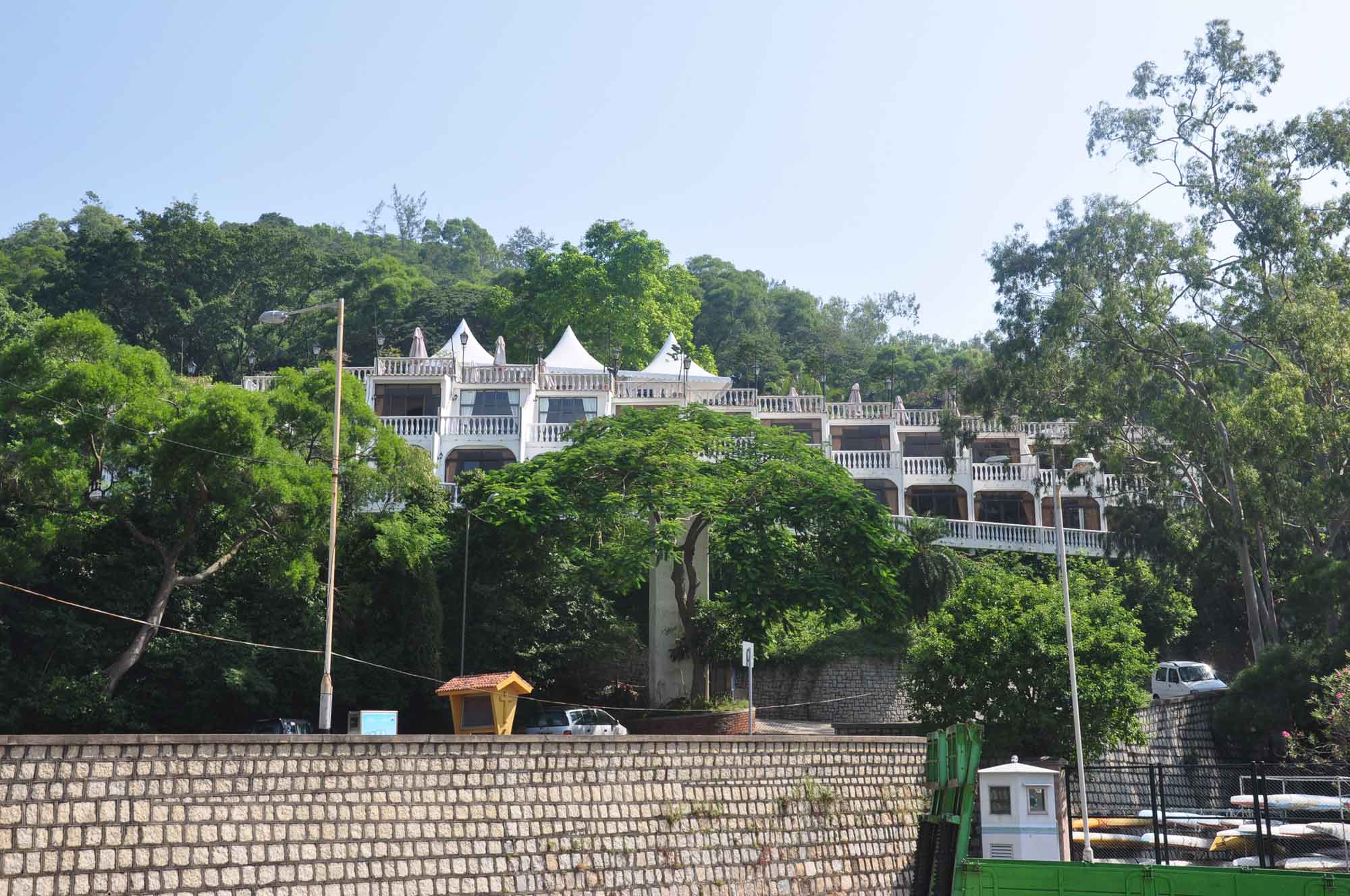 Pousada de Coloane is located next to Choec Va Beach, the southernmost point of (the former) Coloane island.  In my view, it’s everything Pousada de Sao Tiago wants to be but isn’t, at a third of the cost. 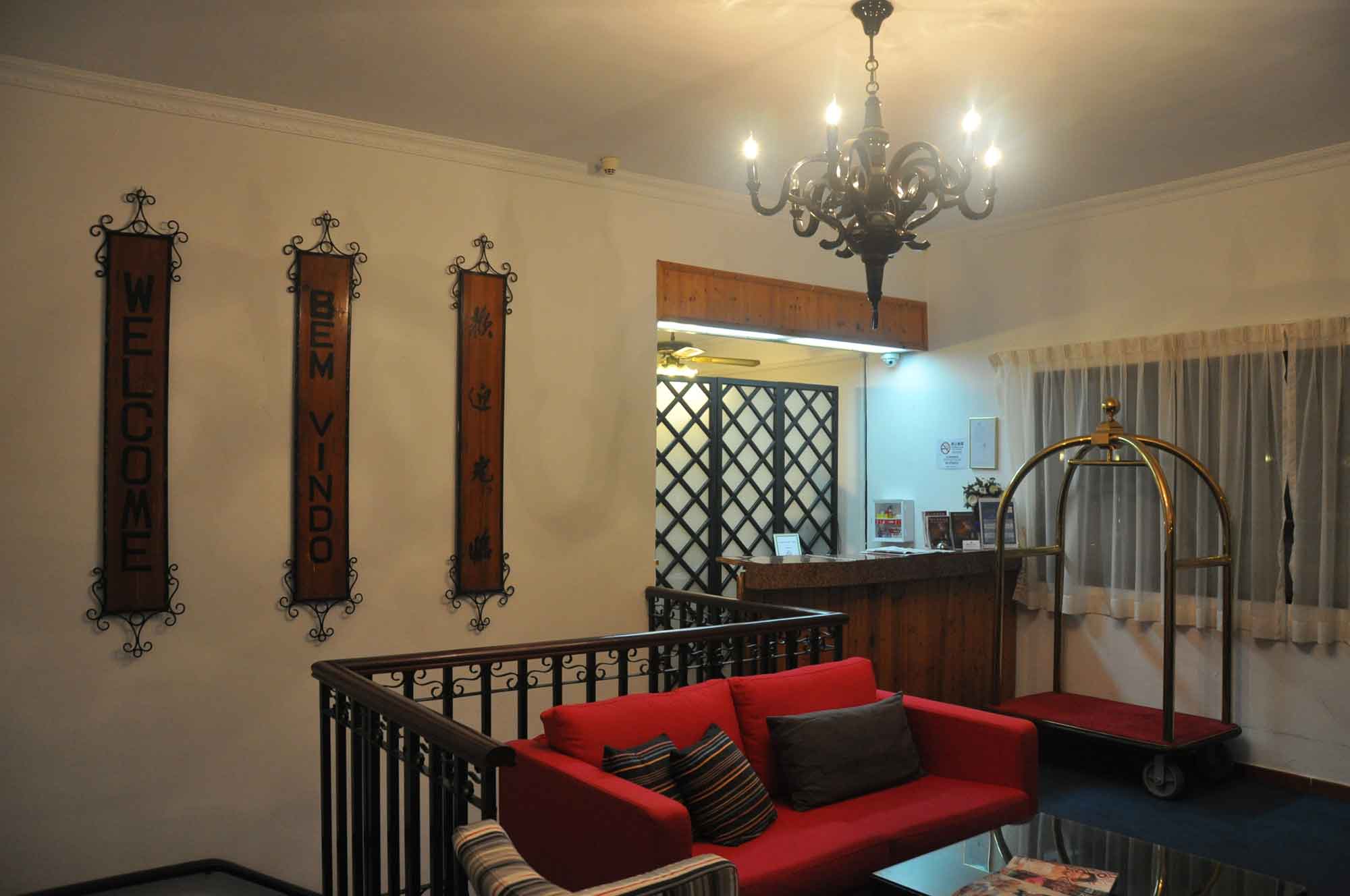 If you want true seclusion, romance, and Portuguese influence, then this is a place to go, all for under $1000 a night on weekdays. 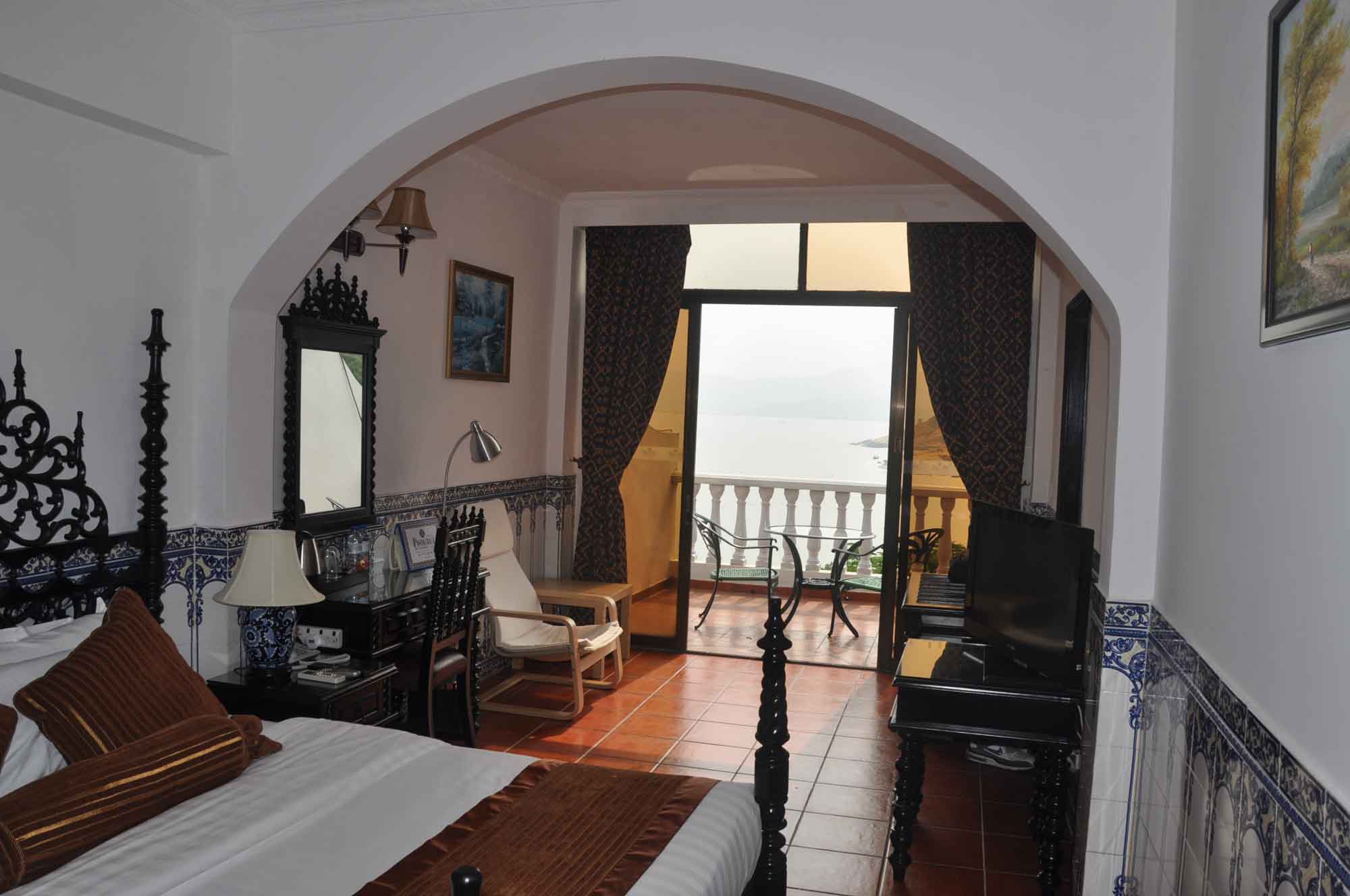 Originally a manor house that was built in the 1930s, it was converted into a beach hotel in 1977. While the rooms aren’t as big or as nice as the Sao Tiago’s, I probably prefer them, with their wicked bitching balconies and kick ass views of Choec Va Beach. 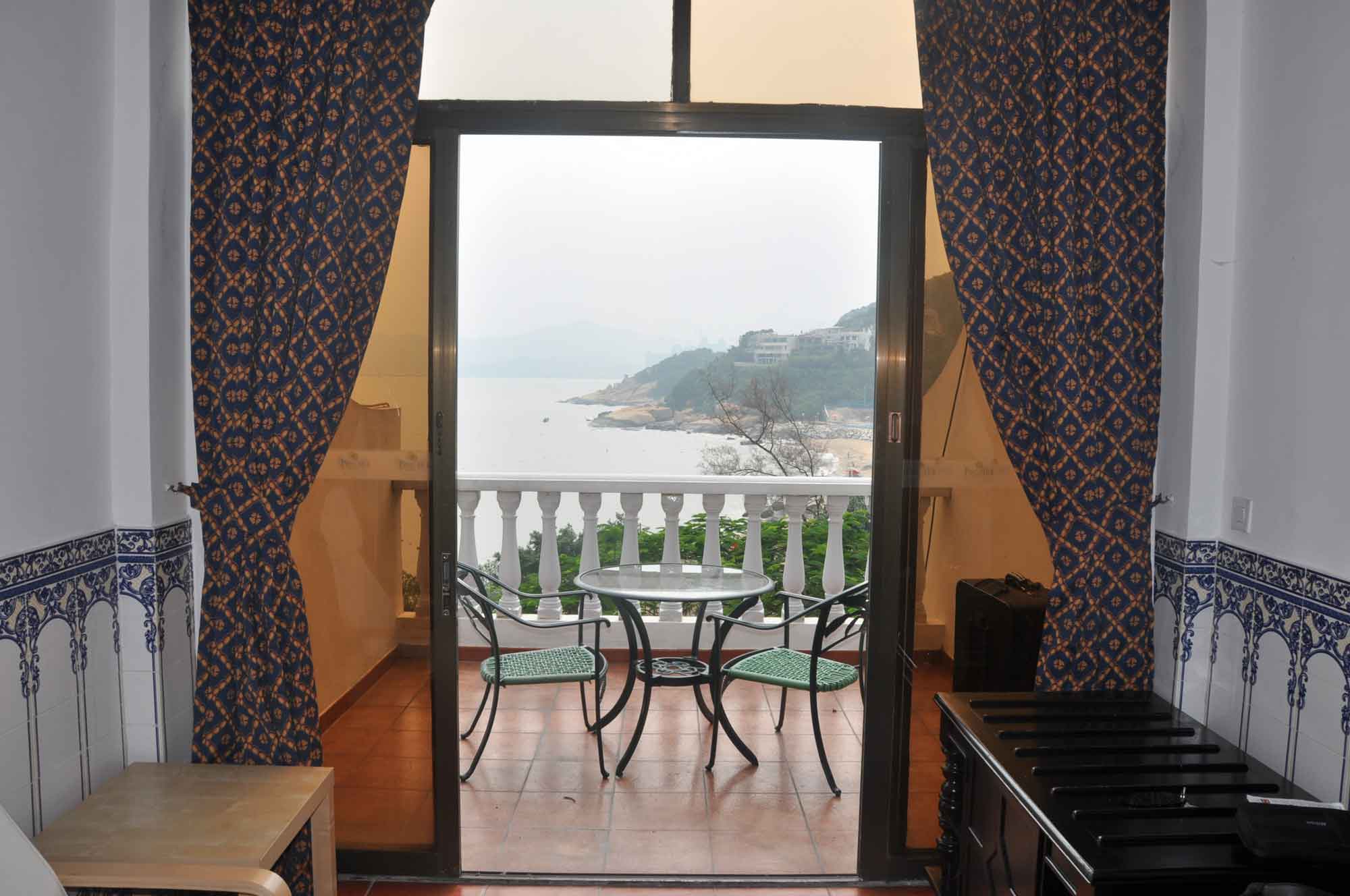 Had it not been so cloudy, you’d be looking at a much better picture below. 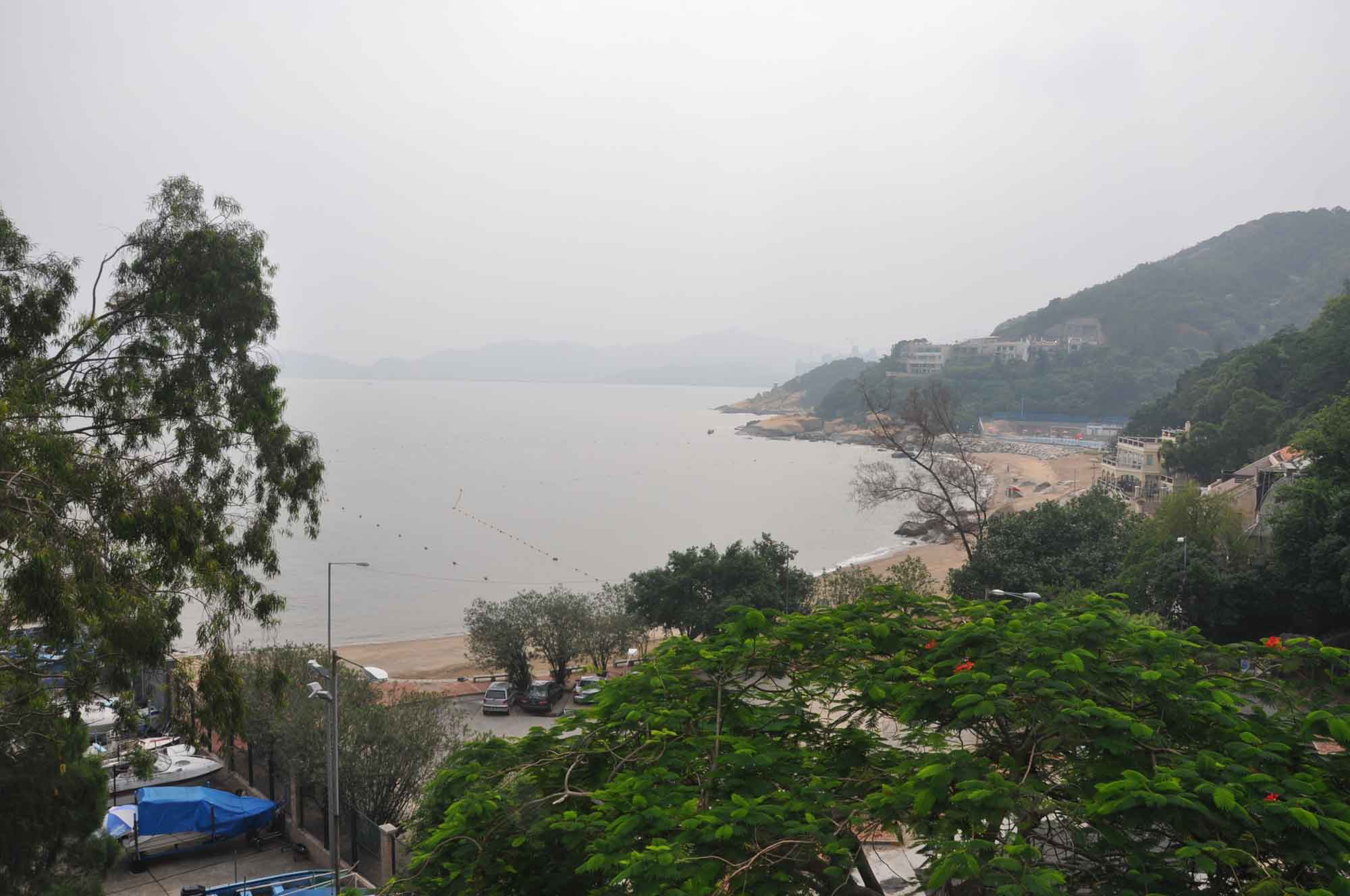 The bathrooms also come fully loaded with a Jacuzzi that actually works, which is no sure thing in any hotel. 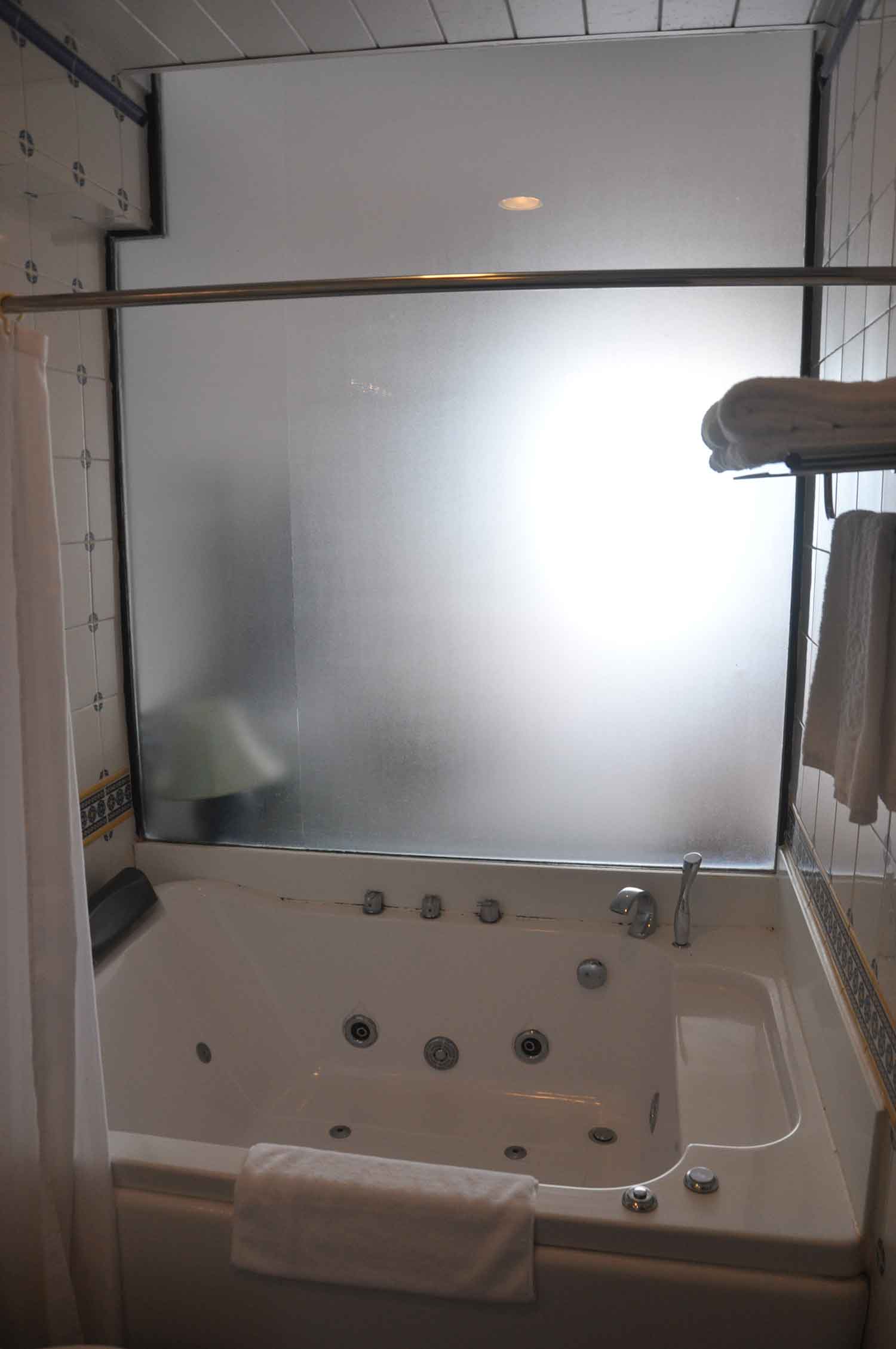 Like the rooms at another Pousada on Macau peninsula, Pousada de Mong Ha, the rooms at Pousada de Coloane have a sort of rustic charm about them that’s simple and endearing.  While they’re not luxurious in any way, we found them to be quite comfortable. 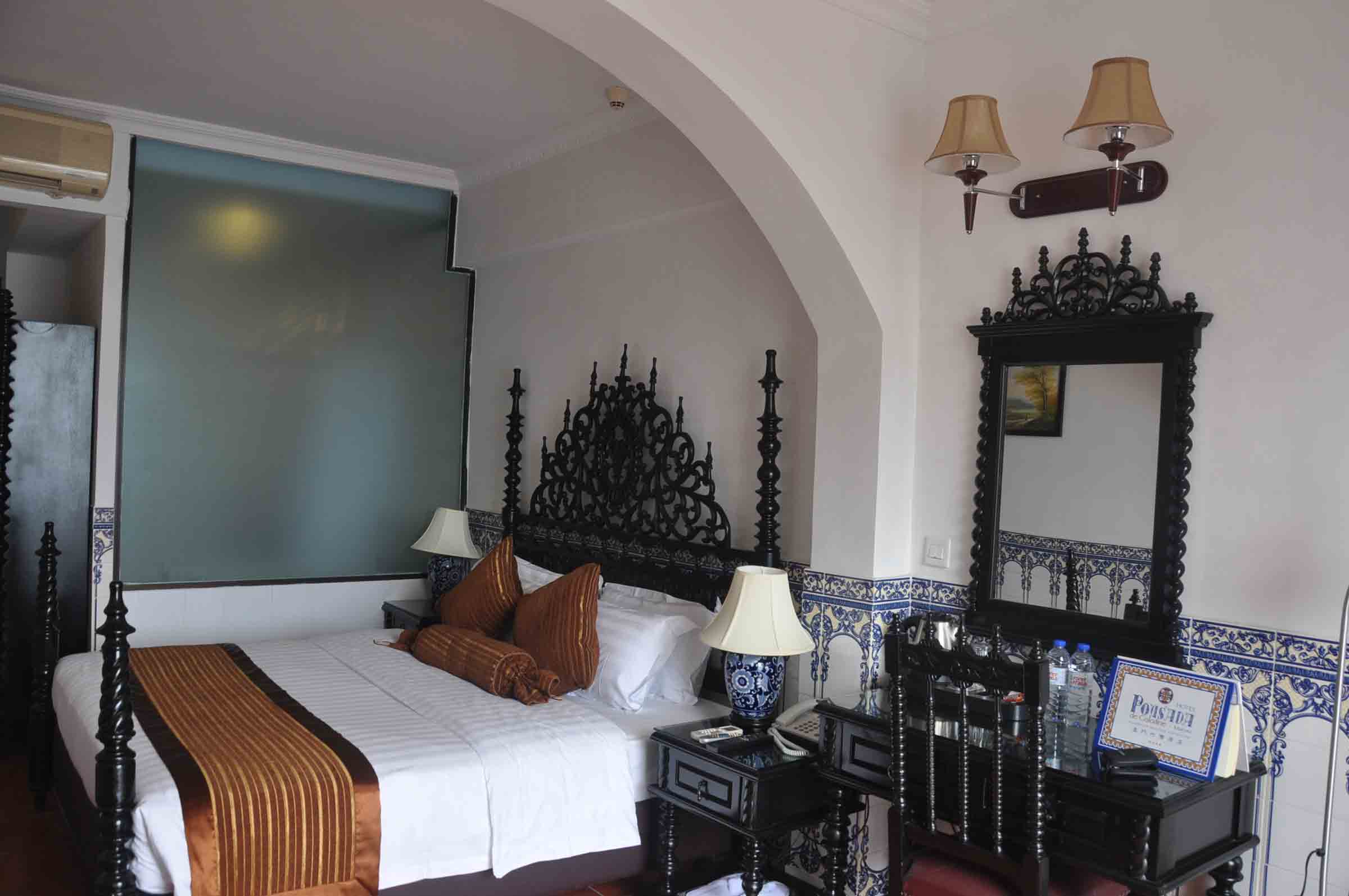 Another nice part about the hotel is the outdoor terrace adjacent to the restaurant and pool.  It’s an excellent place to do nothing but sit back, relax and enjoy the silence. 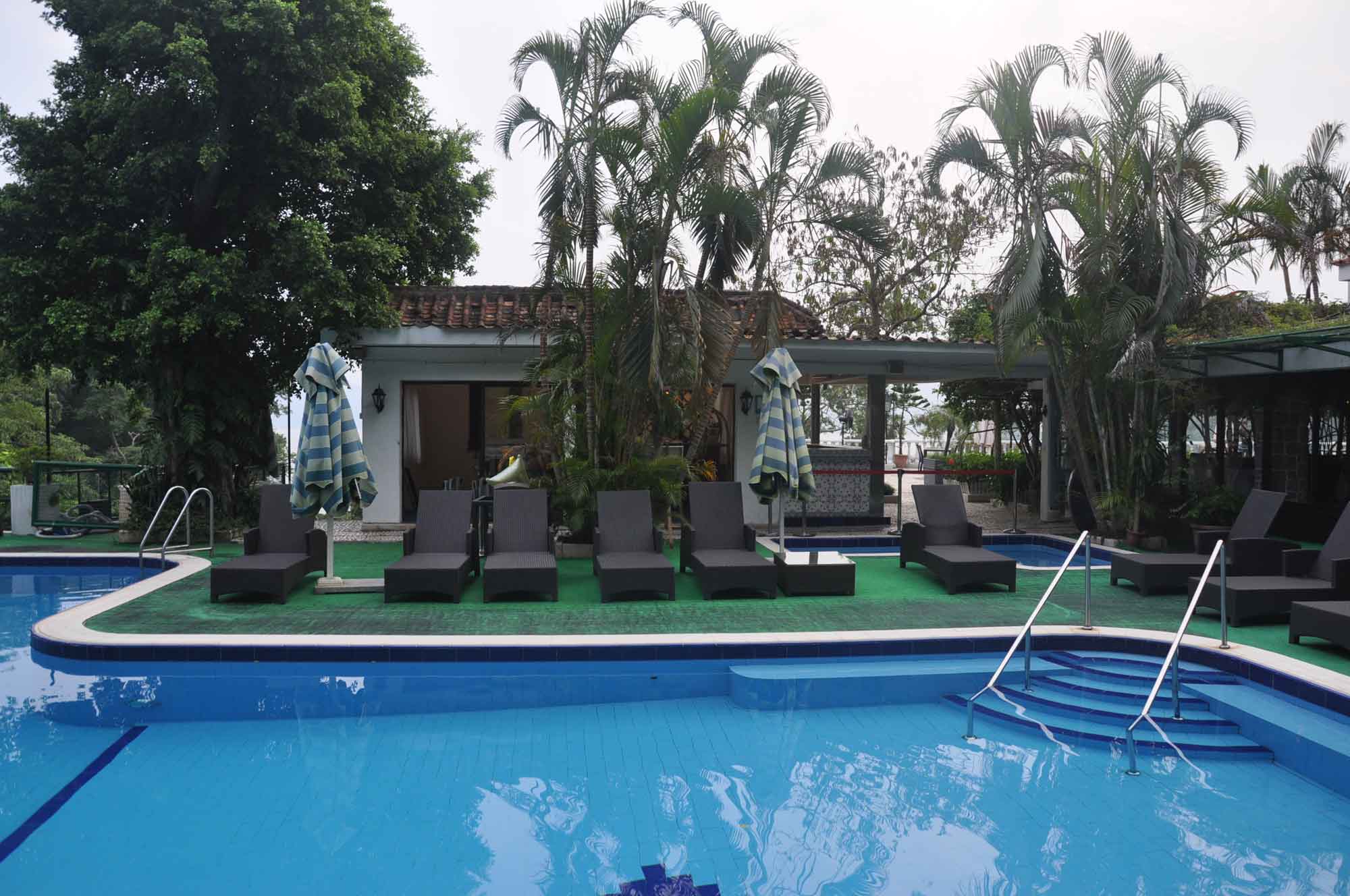 In fact, that’s the main reason I love Coloane so much, because it’s so quiet.  I’ve walked along the main road linking Coloane Village with Hac Sa Beach many times and never saw a single soul around.  It was always just me and the buses, along with a few cars.  If you want to use your time in Macau to really get away from it all, then Coloane is the place to be.  The whole of the island basically just consists of hiking trails, green spaces, parks and beaches. 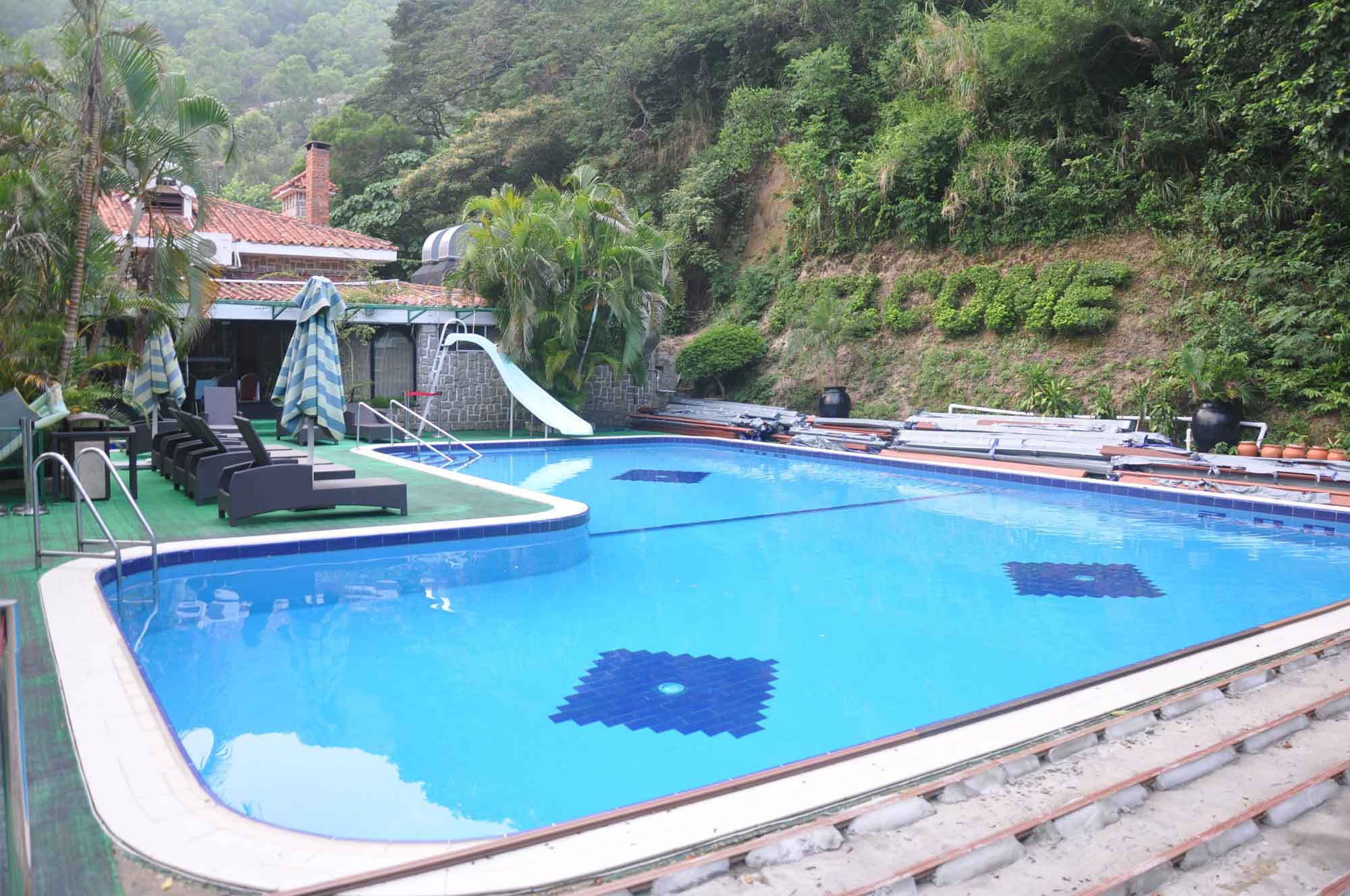 It terms of what Pousada de Coloane offers, it basically has the same amenities as Pousada de Santiago: one pool, one restaurant and no spa.  Room rates are excellent for a beachfront hotel, with prices under $1000 Sunday to Thursday and only touching $1200 on Friday and Saturday.  If you want a room with two beds, it’ll cost a little bit extra, but not much. 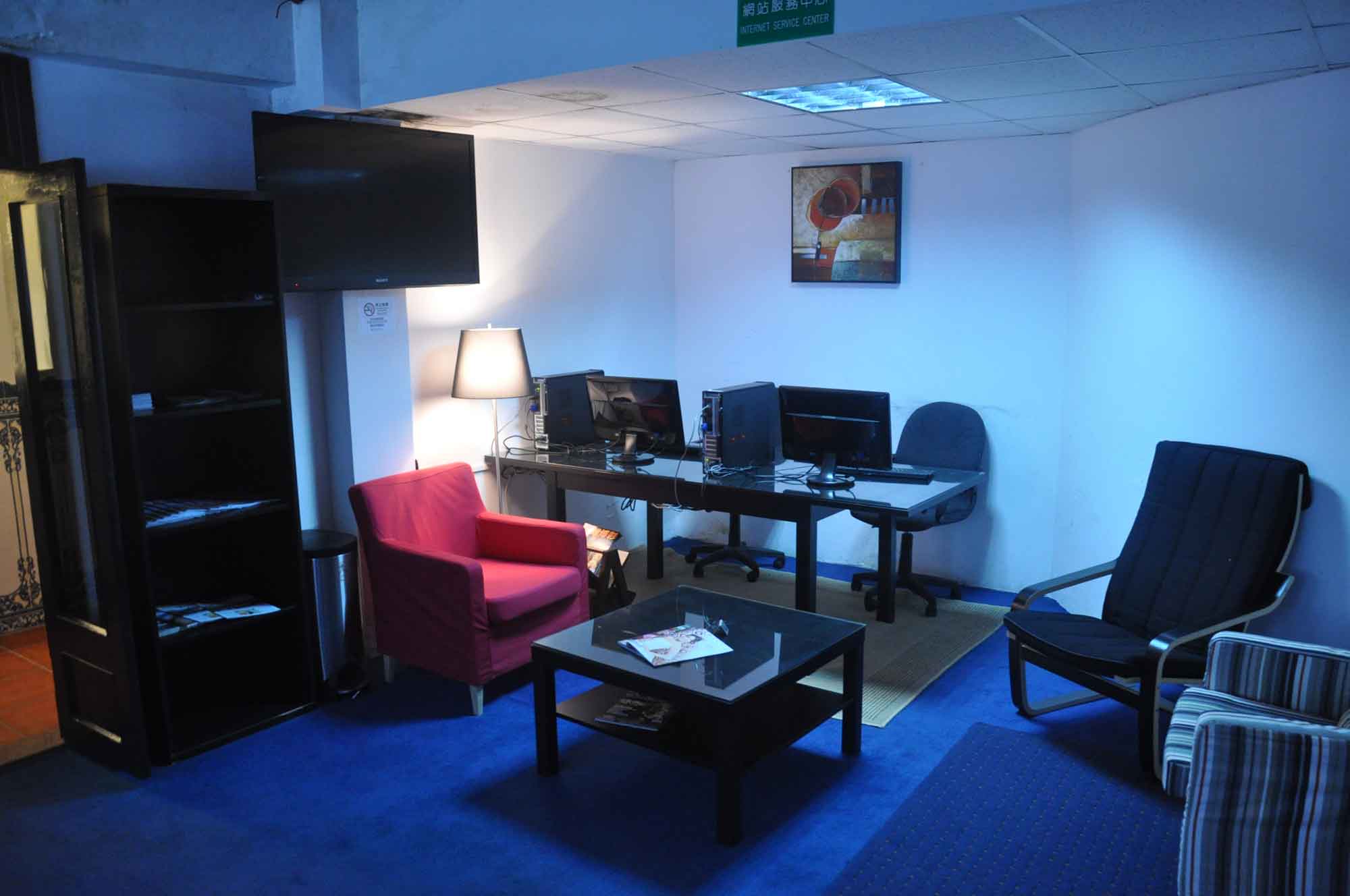 One thing you need to keep in mind about the hotel is its location.  If you’re going to be spending most of your time on the old Peninsula, then obviously it’s quite far out.  While buses are cheap, the routes aren’t always easy to understand, especially for tourists new to the city.  For what it’s worth though, there is a bus stop right outside the hotel that will take you to Coloane Village, the Cotai Strip, Taipa, and finally central Macau.

Coloane Village and the Cotai Strip are accessible by every bus that stops for $6, which is the standard fare city wide.  (Keep in mind, you need to pay in coins and you won’t get back any change.  The desk staff at the hotel can help you break bills if you need them to.)

Bus 15 hits principal destinations in Taipa like the Jockey club and Taipa Village (the Rua de Cunha stop).  If you want to go to downtown Macau, the 21A ends up at A Ma Temple while the 25 hits central locations like the Lisboa, Rua de Campo and Lou Lim Ieoc Park before finishing up at the Border Gate.  Bus times vary as well with intervals between 15 to 30 minutes, so you might have to wait awhile.  If you prefer to call a taxi instead, fares to Senado Square might run around $135 so prepare yourself for that pain and budget accordingly. 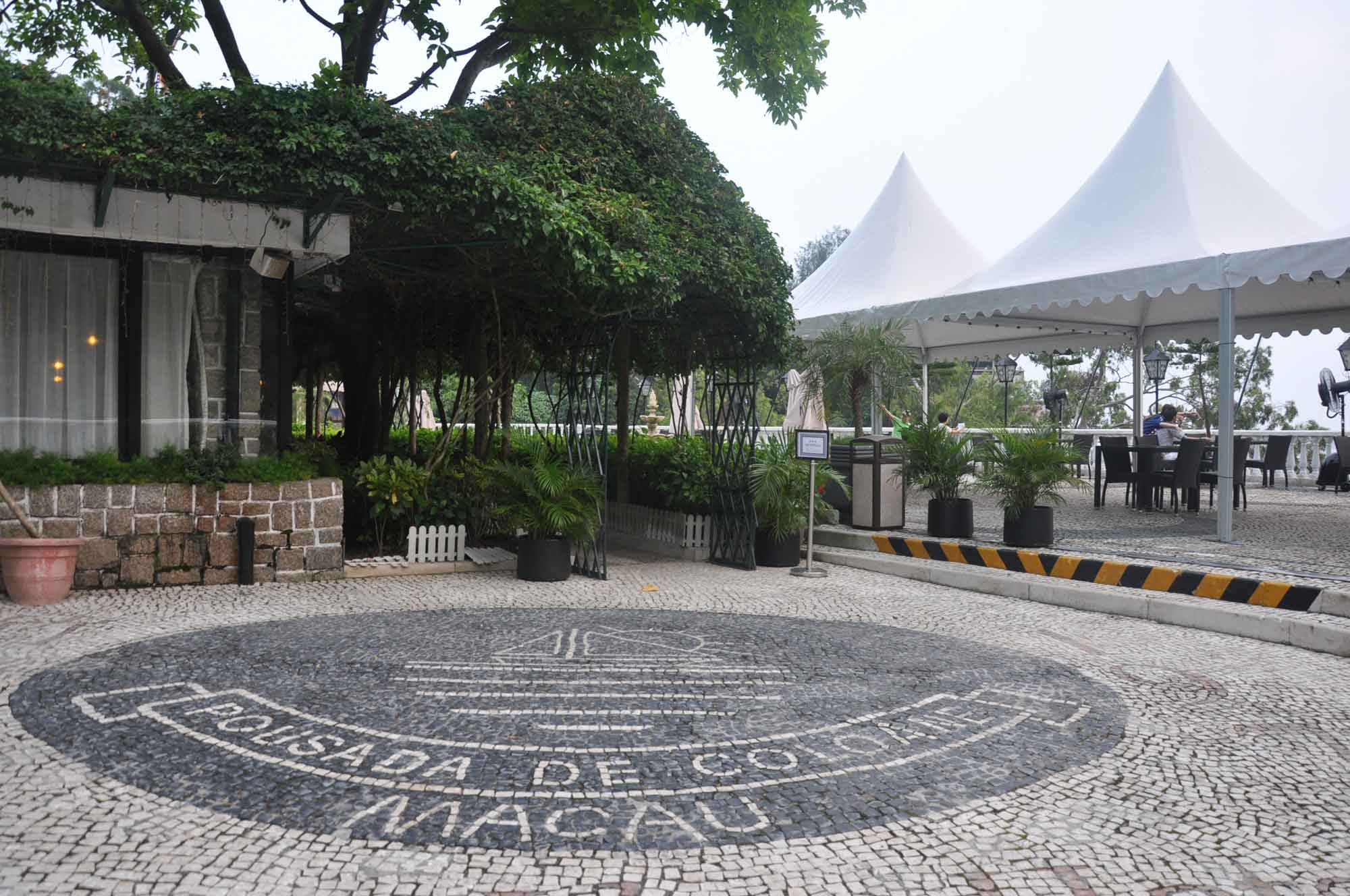 While Mu Yi and I both enjoyed the hotel, there are few issues you need to be aware of.  The Wifi is extremely hit or miss, especially on the first floor, while the breakfast is a bit of an embarrassment.  I wouldn’t even call it mainland quality, it’s that atrocious.  The Portuguese restaurant isn’t up to par either, a victim of poor business and declining standards; some nights I doubt they get any patrons at all.  If you want to eat in this part of town, your best bet is to head to Coloane Village for Nga Tim or Espaco Lisboa, or try Fernando over at Hac Sa Beach. 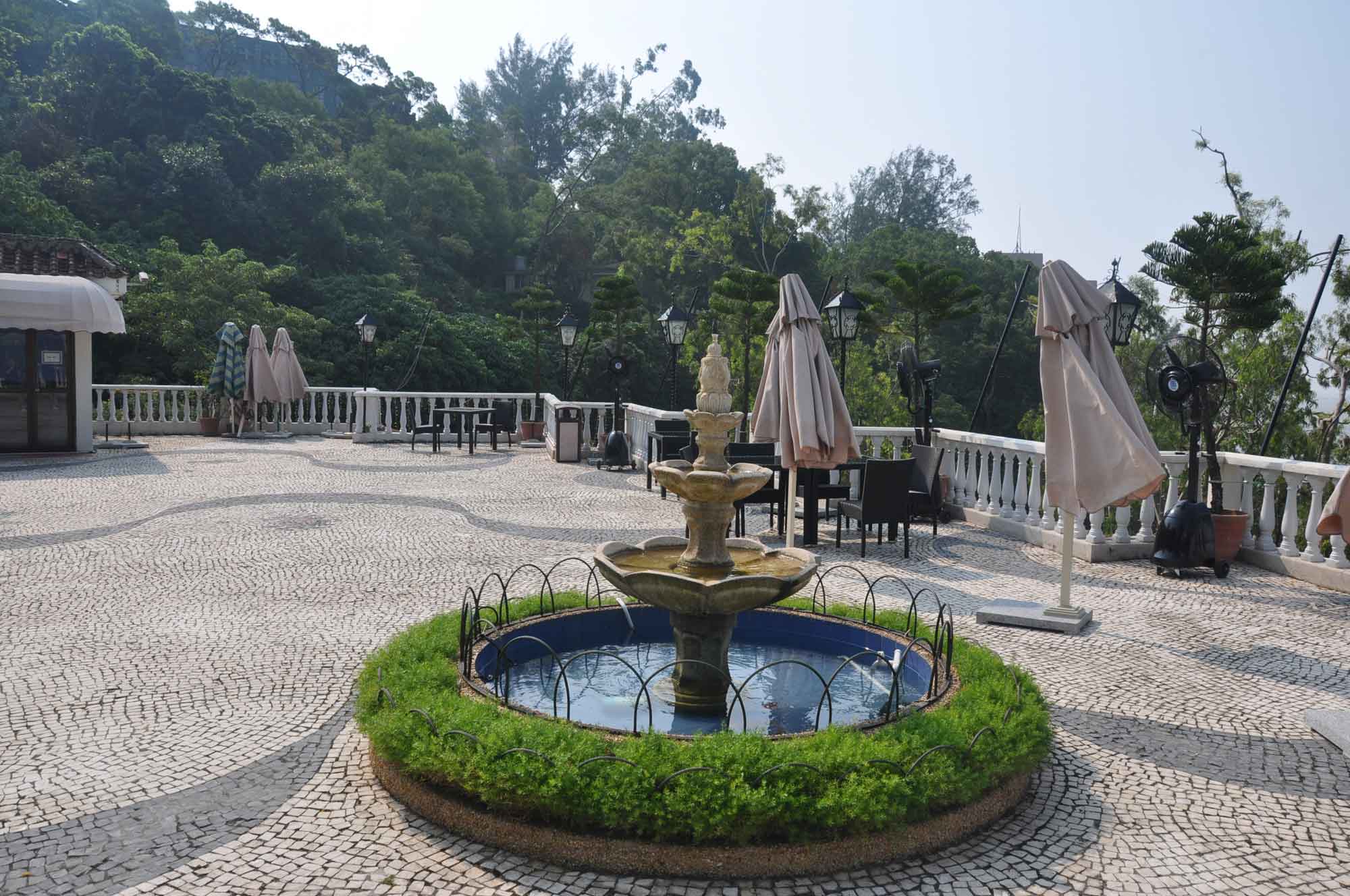 I also think the “rustic charm” of the hotel is another potential warning sign. Rustic charm is only rustic charm to a certain point until it crosses the line and becomes something completely gross and disgusting altogether.  The Pousada de Coloane has been around for well over 40 years now, and without proper vigilance from management, it’s ripe to go downhill fast.  While our stay there was very good, and I didn’t see any evidence of it, a couple of online reviews this year have started pointing out the potential cracks.  If management stays on top of things though and toes the line, then the hotel should continue to be one of the better value options in the city.   I’ve stayed there many times since I first wrote this review in 2012 and never had a bad experience.