After the art exhibition, we checked out of the Lisboa and went to our new hotel for the day, the Pousada de Sao Tiago.

I’ve wanted to stay at the Sao Tiago ever since 2011 when I first saw the cannon outside, the green moss wall and the faint outline of a steeple above.  After I went to the front desk though and saw the hotel pamphlet listing the room rates as beginning at $5800 plus, I filed that dream away to the land of nevermore. 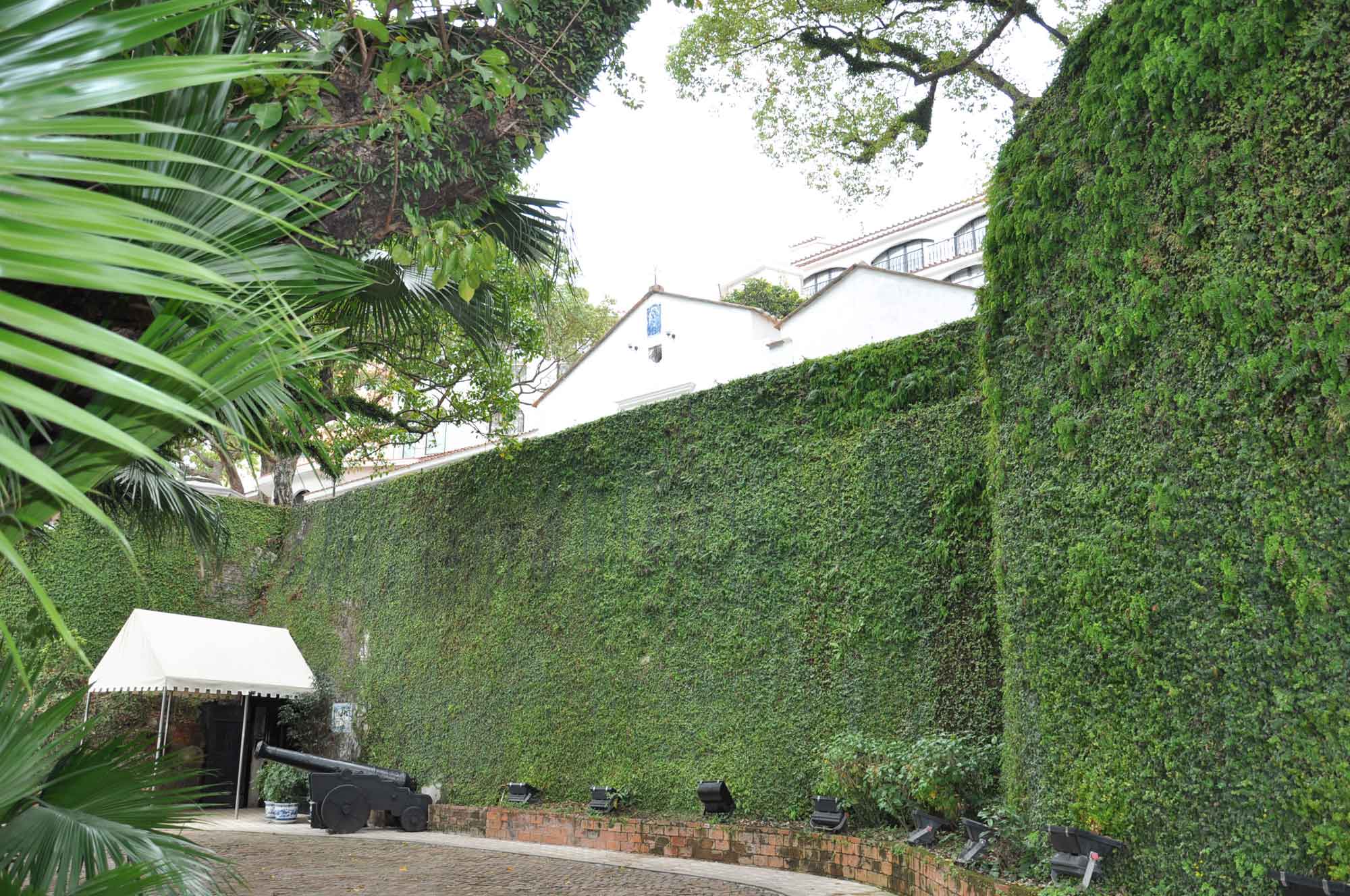 However, from doing the casino reviews I came to learn that rooms in Macau hotels are often 50% cheaper than the listed price.  Indeed that is also the case at the Sao Tiago, which relegated my dream back to the land of reality. 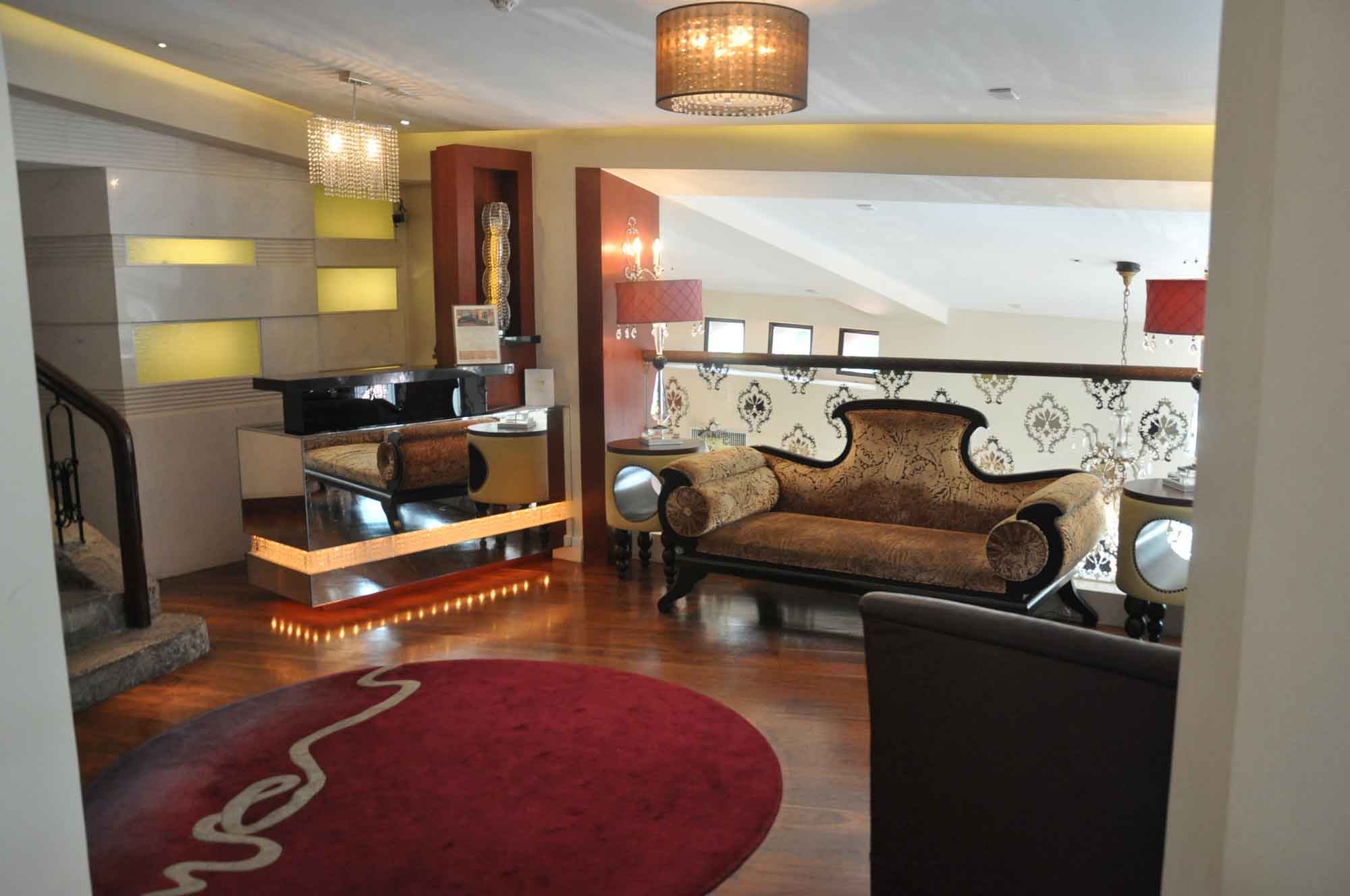 Mu Yi was also smitten with the Sao Tiago so I decided what the hell, you only live once, and booked the cheapest room available, the Barra Suite which ran $2990 all taxes included.  Other room prices are included below, and they are not for the faint of heart.  The Sao Tiago is probably the second most expensive hotel in Macau, after only the Ritz Carlton.

Pousada de Sao Tiago proclaims itself to be a “Romantic Sanctuary”, built inside the 17th Century Fortaleza de Barra (Barra Fortress).  (Warning: Long history sidebar here, if you just want the facts about the hotel, scroll down about three paragraphs.)  The Portuguese were adept at building forts and did so from the beginning of their great Naval expedition eastward, setting them up in Mombasa, Zanzibar, Mozambique, Cochin, Socotra, Ormuz, Goa, and Malacca.  This series of coastal forts protected their shipping lines and ensured they had a series of safe harbours linking Asia and Europe.  Macau didn’t become properly fortified until around 1620, with the principal line of defense the wall that began in the area of today’s Lisboa that travelled to Monte Fortress to Camoes Park to the coastline, thereby forming a protective wall for the whole Northern part of the city.  6 other forts were built within this enclosed city wall area, with the Barra Fortress being the southernmost of them, completed sometime before 1622.

These early years in Macau were a time of fantastic wealth, when all it took was 3 or 4 years of trading between Malacca, Japan, and China to amass a fortune for life.  The Dutch were the first nation to eye Macau’s prosperity, and they started scoping the island out in 1601, sizing it up for a possible attack.  Dutch aggression was quelled however in 1609 when Portugal and the Netherlands signed the Antwerp Truce, which ended hostilities between the two nations.  Twelve years later however, the truce expired and the Dutch seized their chance no more than a few months later, attacking the city on June 23rd, and 24th, 1622.  They had chosen a good time to invade, as most of the men were away that day, either part of the trading fleet on its way to Japan or in Siam providing personal protection for their King, or even way up in Northern China aiding the Ming Dynasty’s effort to quell the Northern Manchu barbarians.  (The Northern Manchus would eventually prevail 22 years later, aided in no small part by Ming General Wu San Gui who did the unthinkable – he just opened the door of the Great Wall for them at Shanhaiguan pass and let them in.  After that I think he gave them directions to Beijing.  It always blows my mind to think of all the Chinese that must have died building the Great Wall, a wall that runs through miles and miles of scorched jagged mountains, and other barren uninhabited terrain, way out in the middle of nowhere.  I think of all those men that died for one reason, to protect China against the Northern Manchus, or the very same people that Wu San Gui just let in.  I guess the moral of the story is don’t mess with a General’s mistress, or women are killers, or something like that.)

Anyway, back to the Dutch invasion.  On the day of the attack there were less than 1000 people in the city, and only 80 of them were Europeans who could bear arms.  The Dutch landed on the northeastern side of the peninsula and proceeded to enter the city between Monte Fortress and Guia Hill.  It was then that the battle changed.  A Jesuit monk named Father Rho must have been a hell of a shot, because he landed one square onto the main Dutch powder magazine, destroying it completely. The Portuguese defenders, of what little there were, then went on the offensive, and stormed down from Guia and Monte hills to engage the Dutch in hand to hand combat.  Once the Dutch commanding officer was slain, the attacking forces became disoriented and disorganised, and hastily made a beeline back to the coast and their boats.  Many drowned in the waters trying to reach them.  My favourite part of the story that I’m summarising here from Austin Coates wonderful book, A Macau Narrative, is that one African slave woman, disguised as a man, even killed two Dutch during the retreat with a prong.  All I got to tell the Dutch is, if you’re getting your asses kicked by an African slavewoman and a Jesuit priest, then maybe you ought to rethink your line of work and/or battle plan.  Anyway, that was it.  June 23rd and 24th 1622 were the only two days the Portuguese would need to use their forts, and it resulted in a thorough, unadulterated slaughter, a beat down of the highest order.

Back then to the Pousada de Sao Tiago.  It has a somewhat isolated location, on the southwestern tip of the island, at the base of Barra hill.  About the only thing close to it is A Ma Temple, the Maritime Museum, and the first 4 UNESCO Heritage Sites.  To reach San Ma Lo and downtown Macau, you’re probably looking at a 25 to 35 minute walk along Avenue de Republica and the Praia Grande, two of the nicest streets in the city in my opinion.  Along the way before you hit the main city drag you’ll also pass Henri’s Galley, a very good Portuguese restaurant.  In other words, the location is remote, but pleasantly remote, if you don’t mind walking.

Pousada de Sao Tiago was very disappointing for both Mu Yi and I.  Perhaps we expected too much but for $3000 a night, we wanted the total experience. 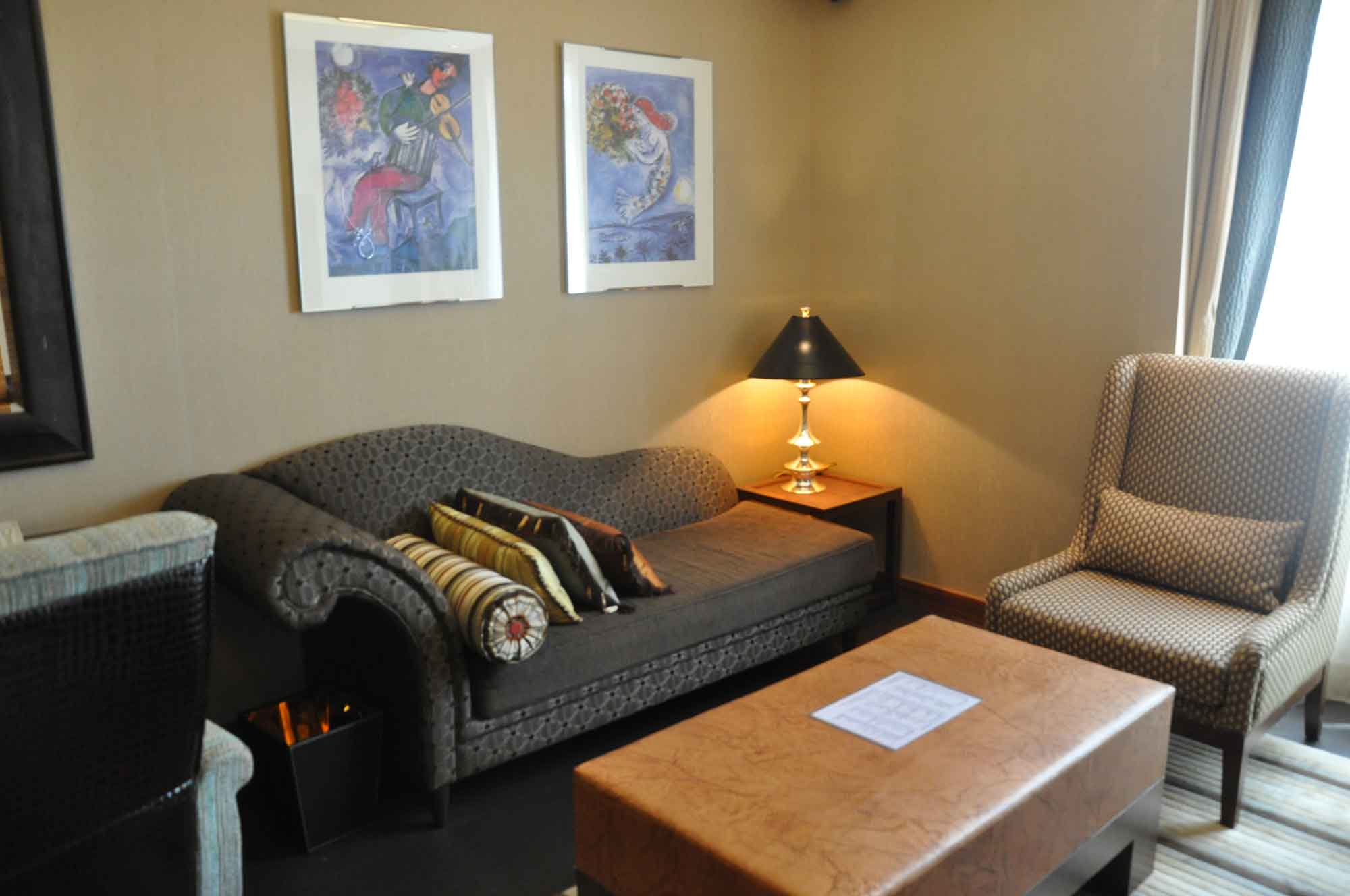 Set in the ruins of an ancient fort, in a hotel called a “Pousada”, we wanted the Sao Tiago to exude history, to exude Portuguese characteristics, to provide the sort of stay you can’t get anywhere else in Macau. 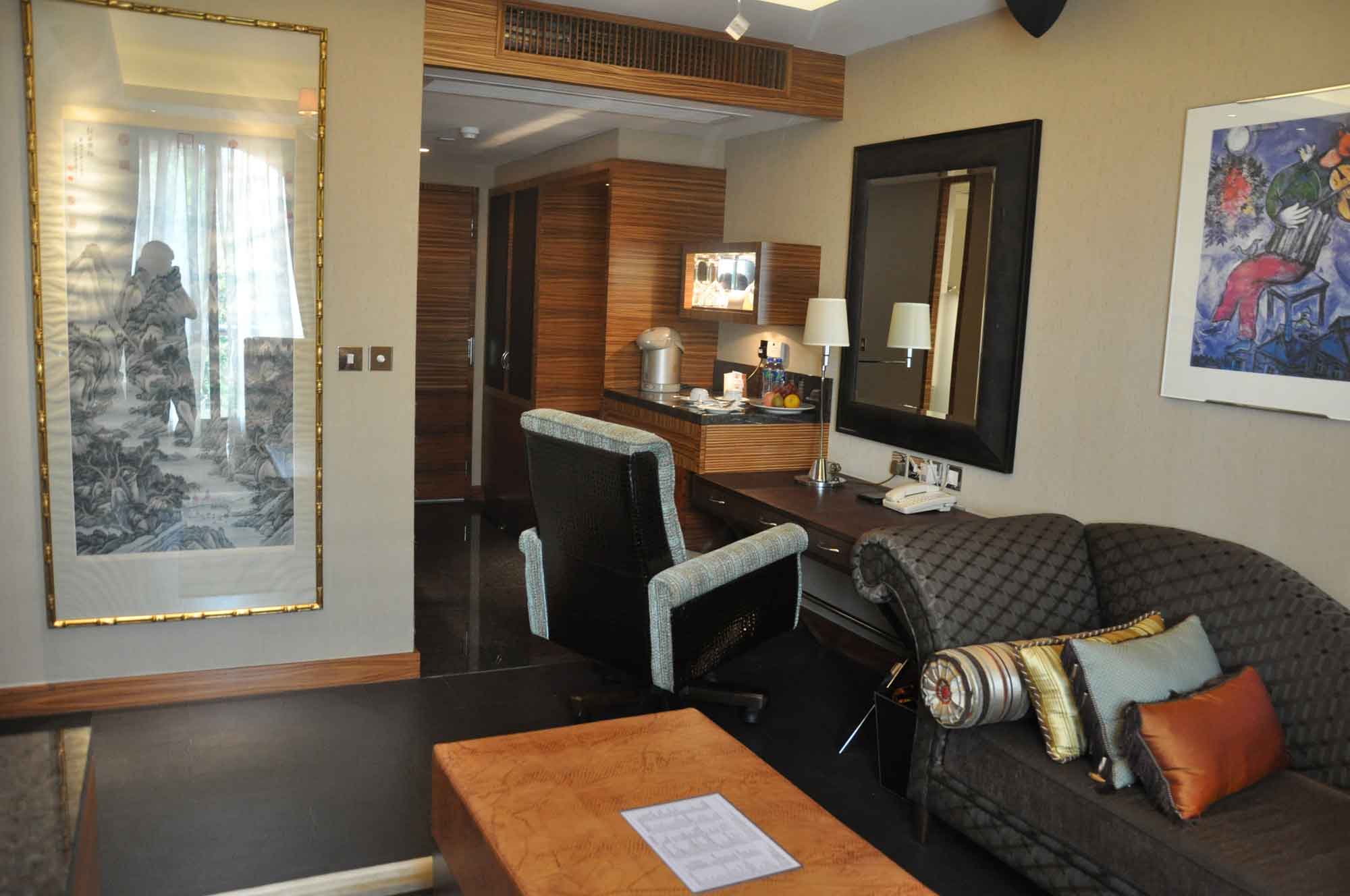 You see, the night before at the Lisboa, we had gotten just that.  Built in 1970, the room looked like a room from that era, and we really dug the retro charm.  The Sao Tiago suite, in comparison, was cluttered and characterless, and we didn’t like it as much. 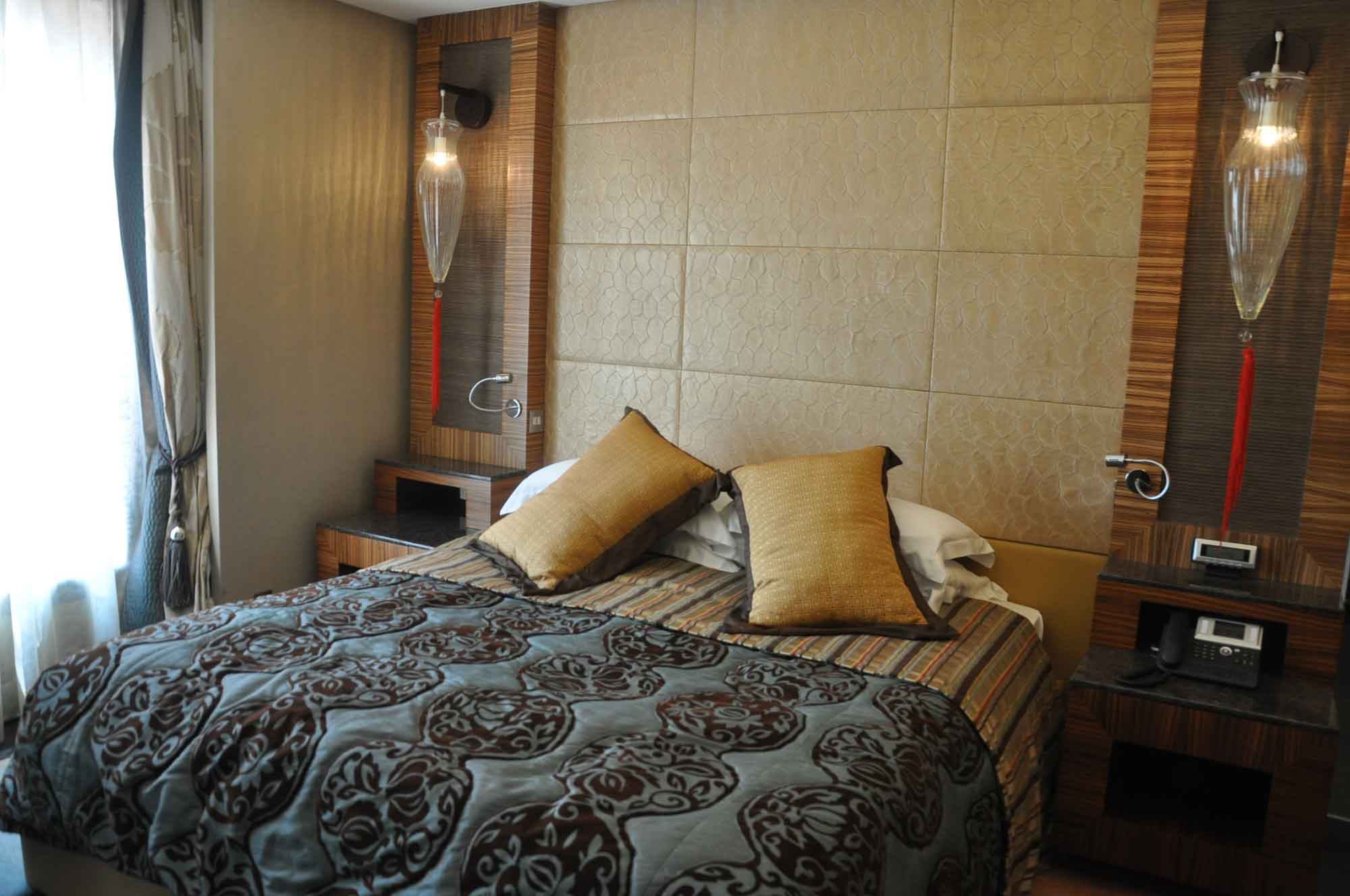 While it was certainly luxurious to a degree and had nice furniture, blankets, pillows etc along a very large marble bathroom, there was nothing unique about it.  Years ago I think all of the rooms at Sao Tiago were decorated in Portuguese style, but they decided to go more modern during a remodel 3 or 4 years ago. 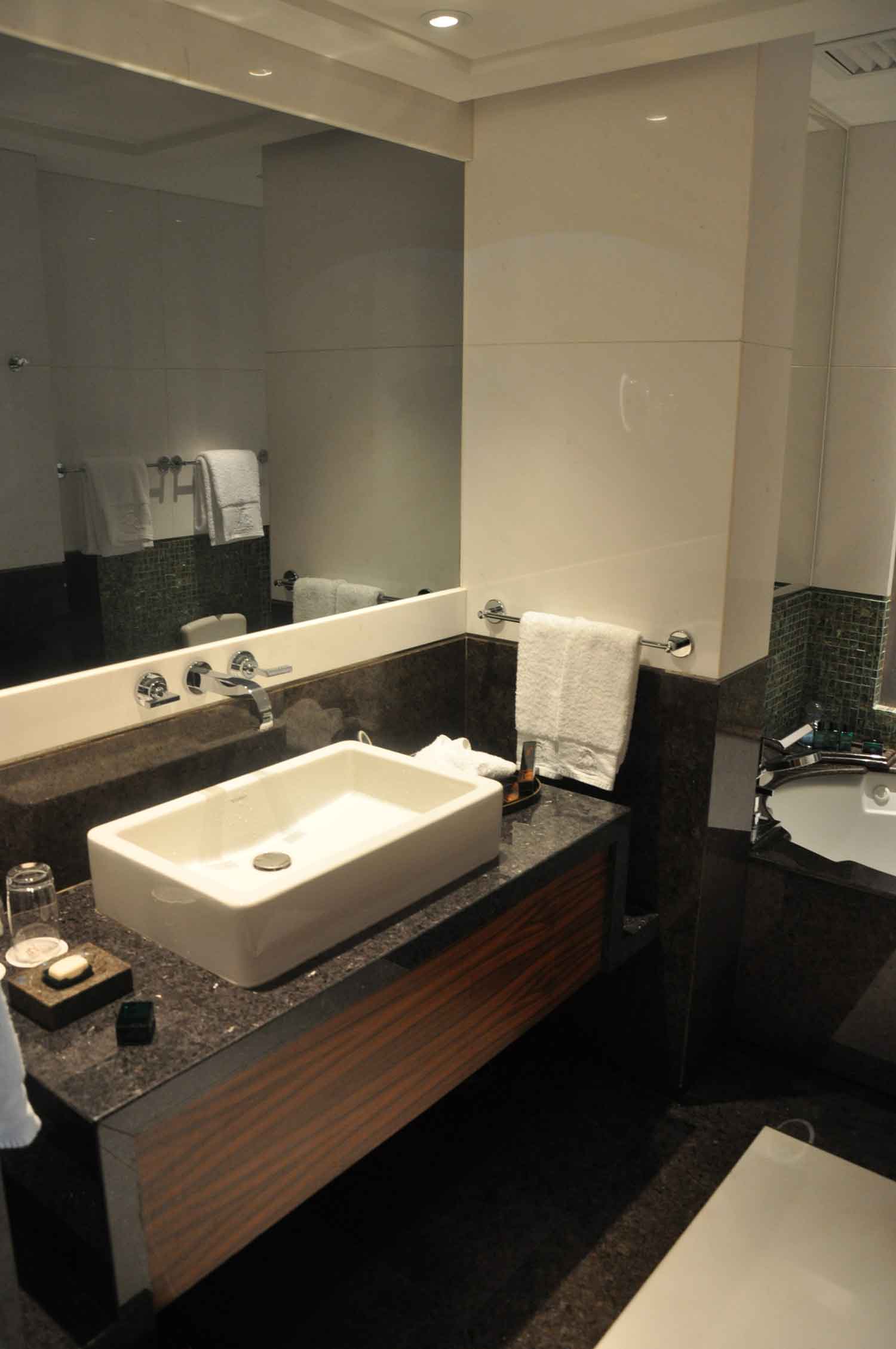 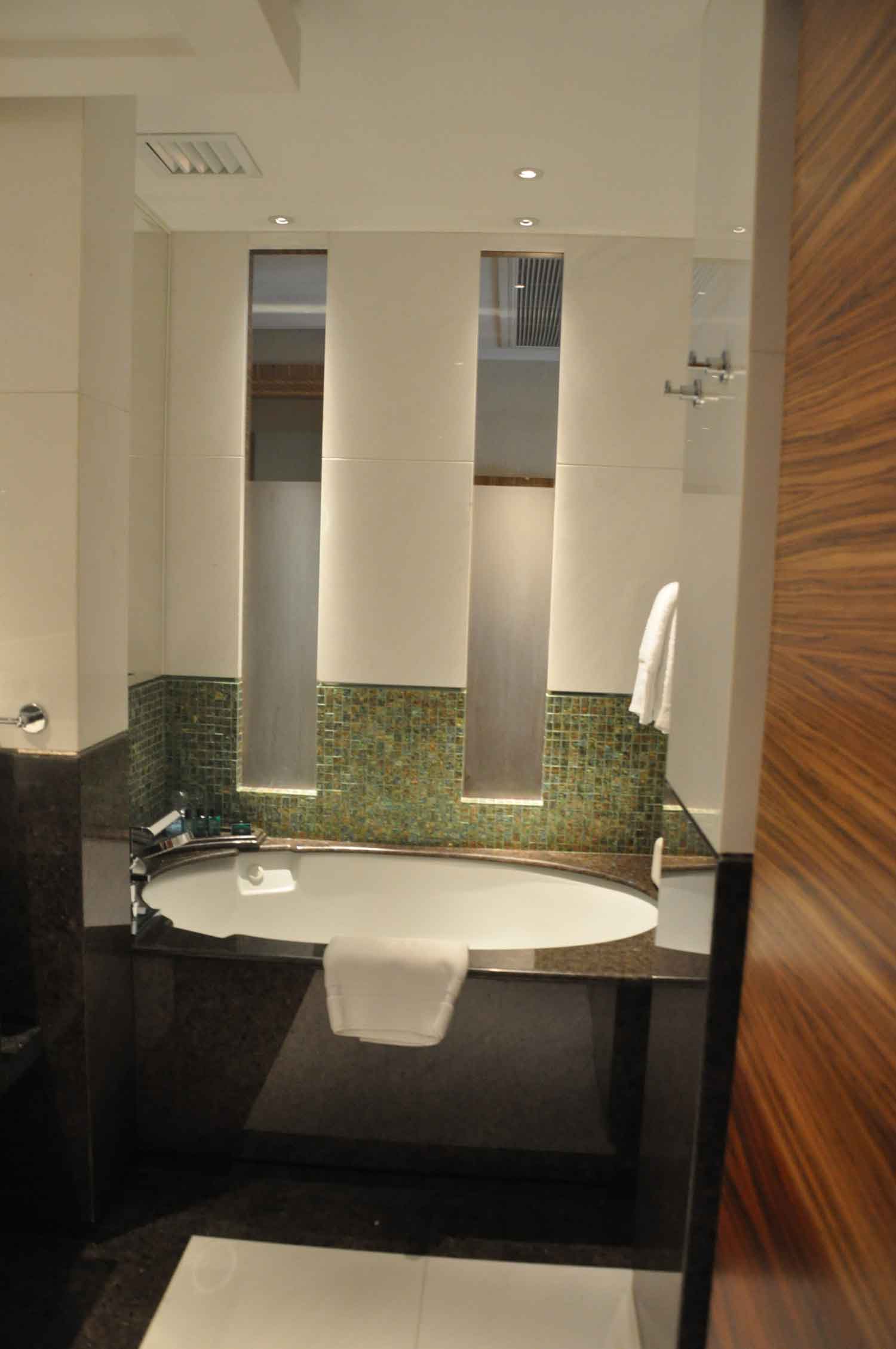 And by doing that, I think they lost the key essence of their hotel.  Without any history or romance, not to mention any kind of Mediterranean feel, the Sao Tiago has all the charm of a chain hotel, and that’s just not worth paying $3000 a night for.

There are other issues as well.  The Sao Tiago doesn’t have a gym, a spa, or any kind of spa facilities like a sauna, steam room, or jacuzzi.  All they have is one pool, one restaurant and one bar.  There’s no shopping either, which means guests can’t just stay in the hotel all day and be entertained.  It’s not a destination in itself the way that the Venetian or City of Dreams are. 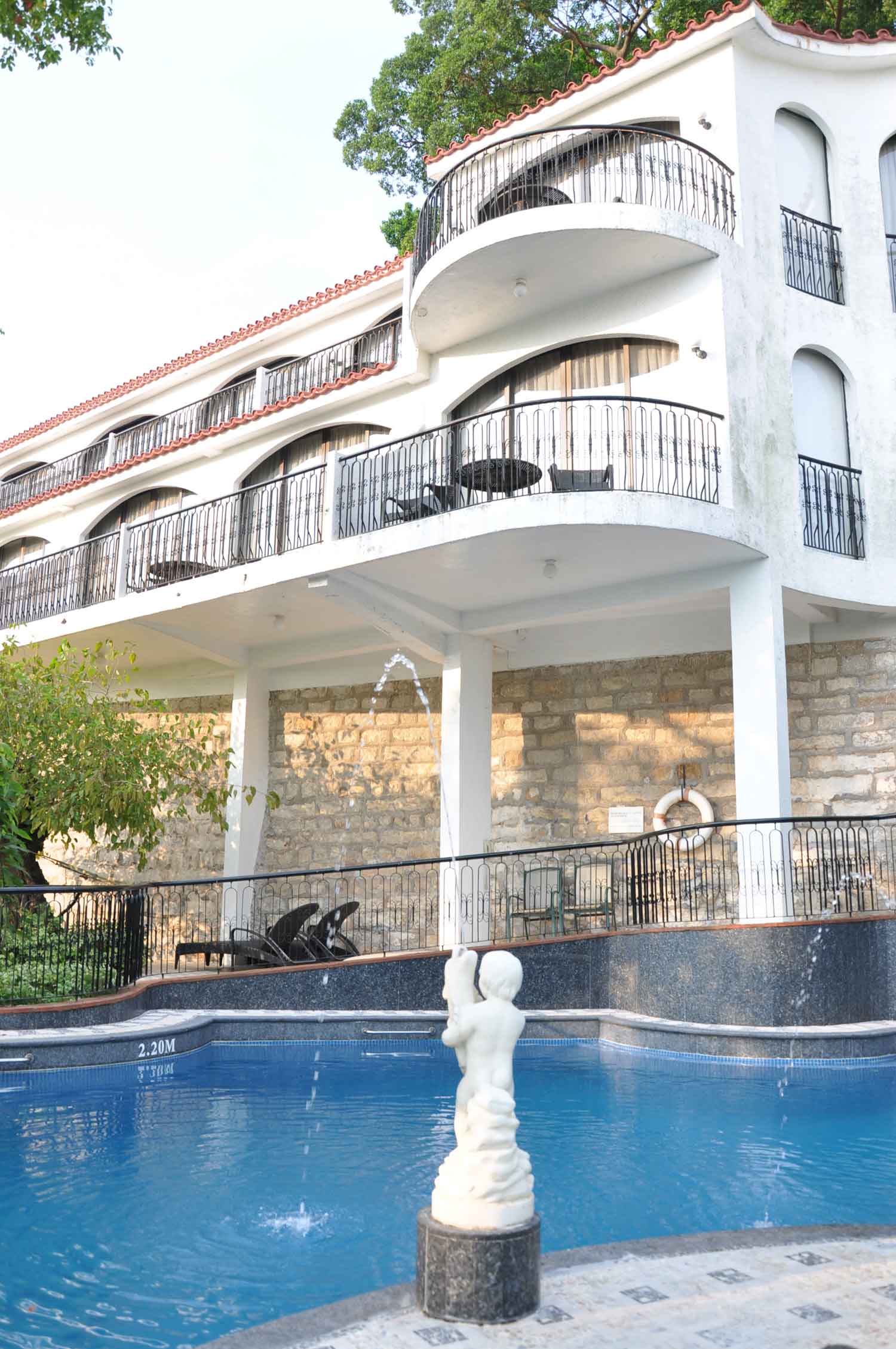 For that reason, you’ll probably be out and about for most of your day, returning to the hotel only at night.  And there are a lot better options, far cheaper and more centrally located, that you should use if you just need a place to sleep. 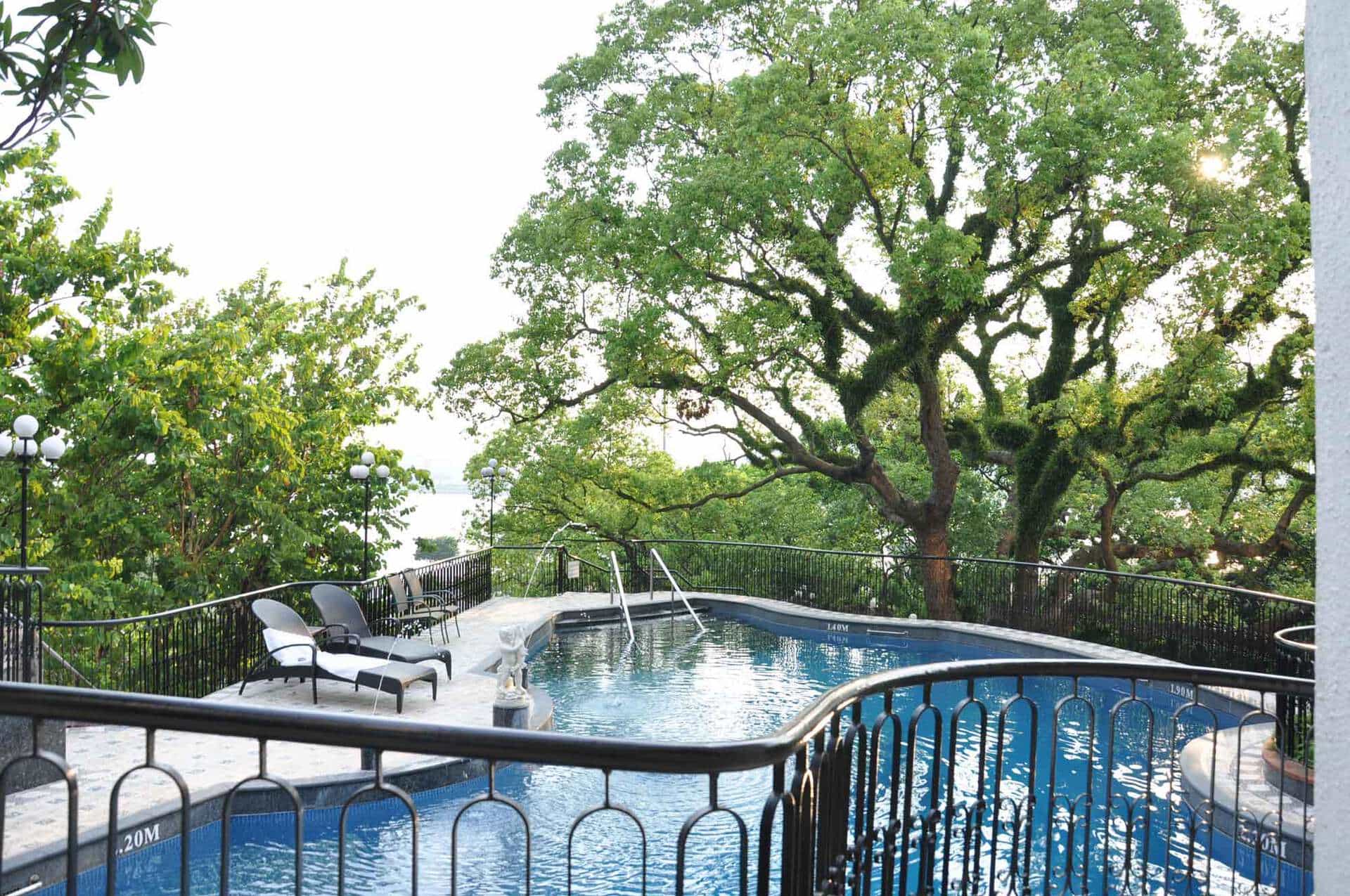 Positives to end the review on?  Sure there are a few at the Sao Tiago.  Check in and check out were both handled smoothly, and the staff were courteous and professional at all times.  Like the Lisboa, everything in the mini bar is free, provided you left the empty there after.  You couldn’t just go to town and load your suitcase up.  The outdoor patio beside the restaurant is a peaceful tranquil spot, perfect for sitting back and unwinding in the late afternoon. 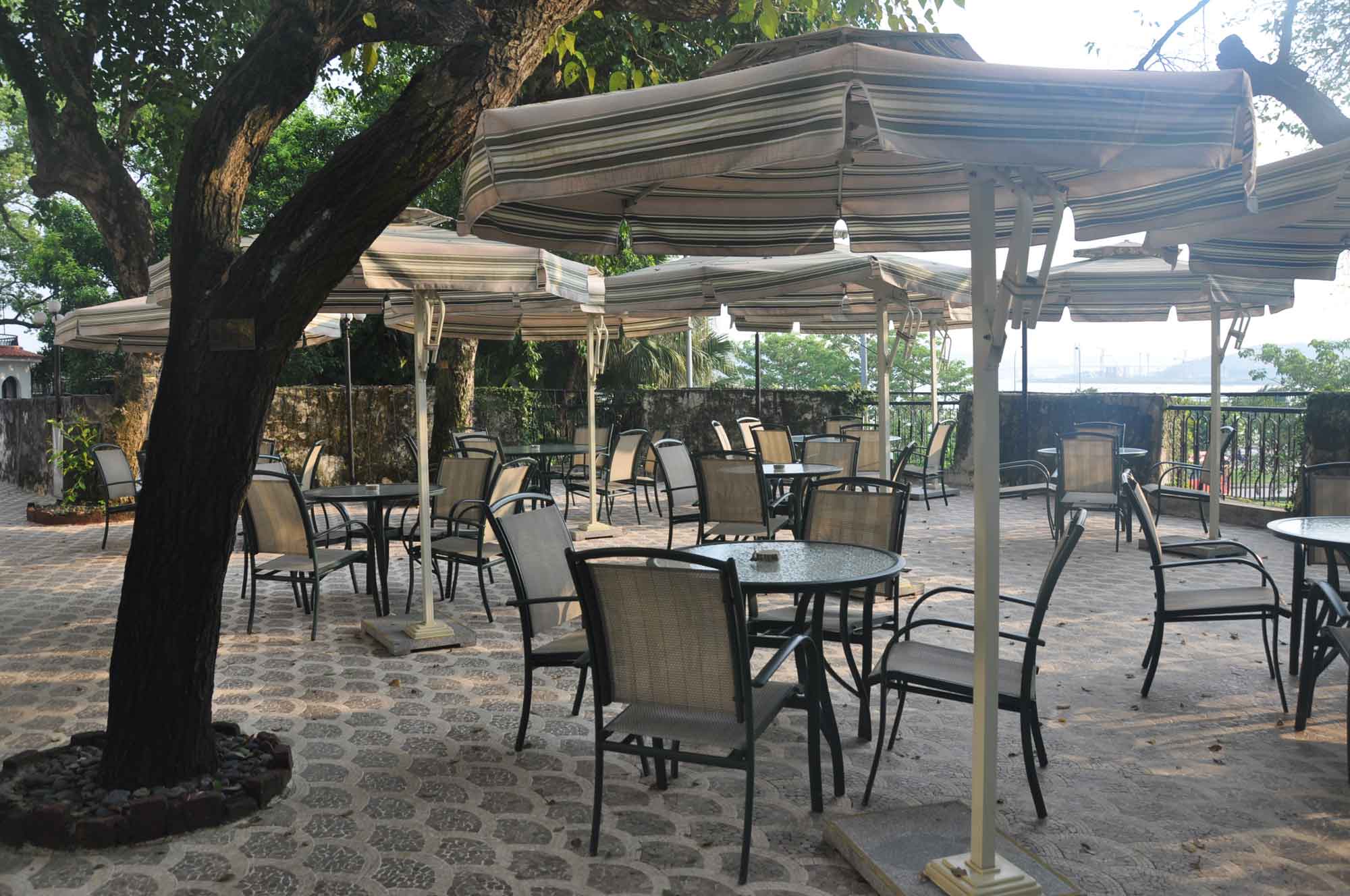 And of course, if you feel a sudden urge to pray, the quaint little St. James Chapel is always right there too.

They also have a great tunnel like entrance, which might be the only real trace of the original fort that still exists. 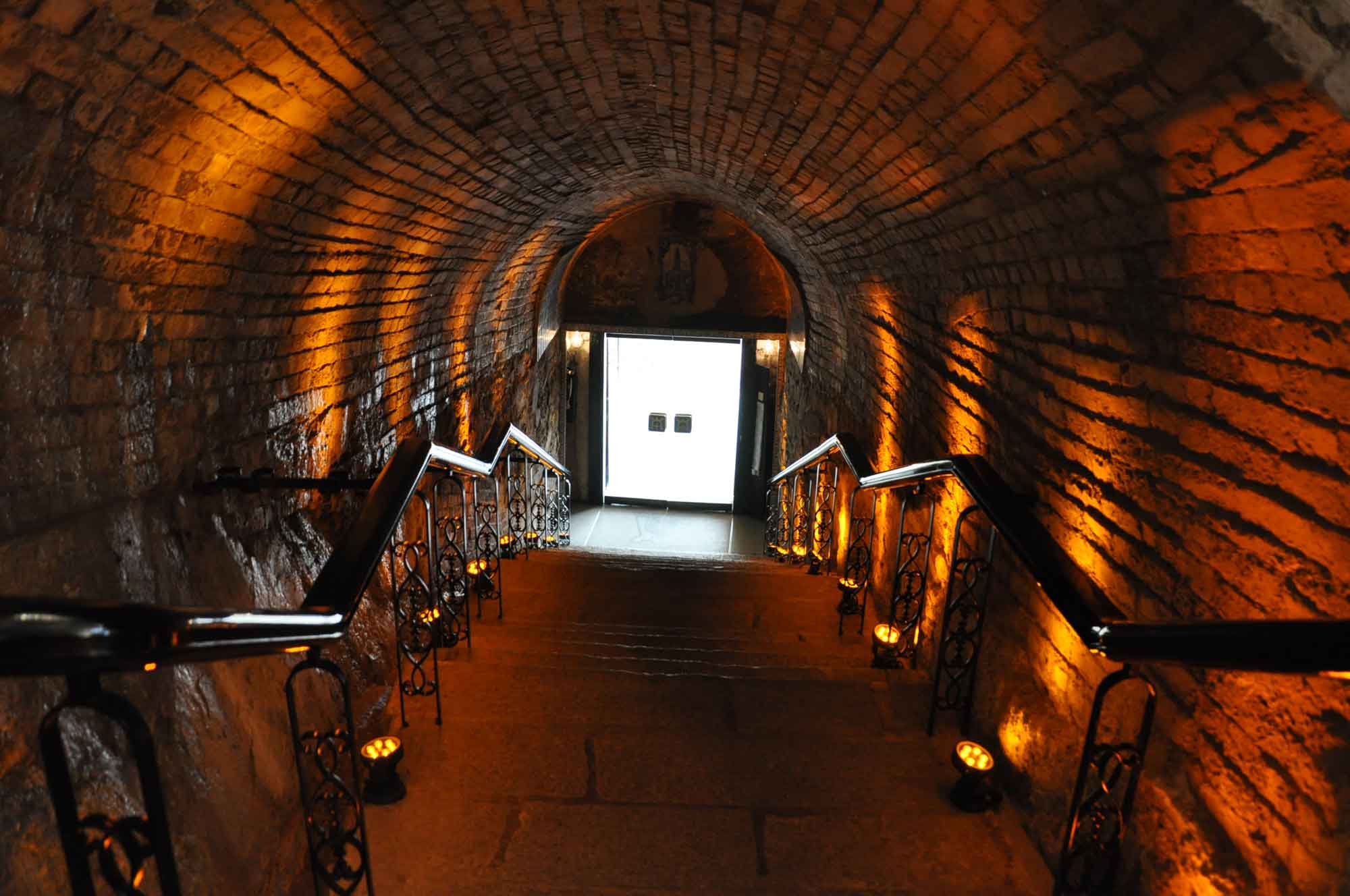 The best thing about the hotel, however, might be its restaurant, La Paloma, which you’ll read about next. 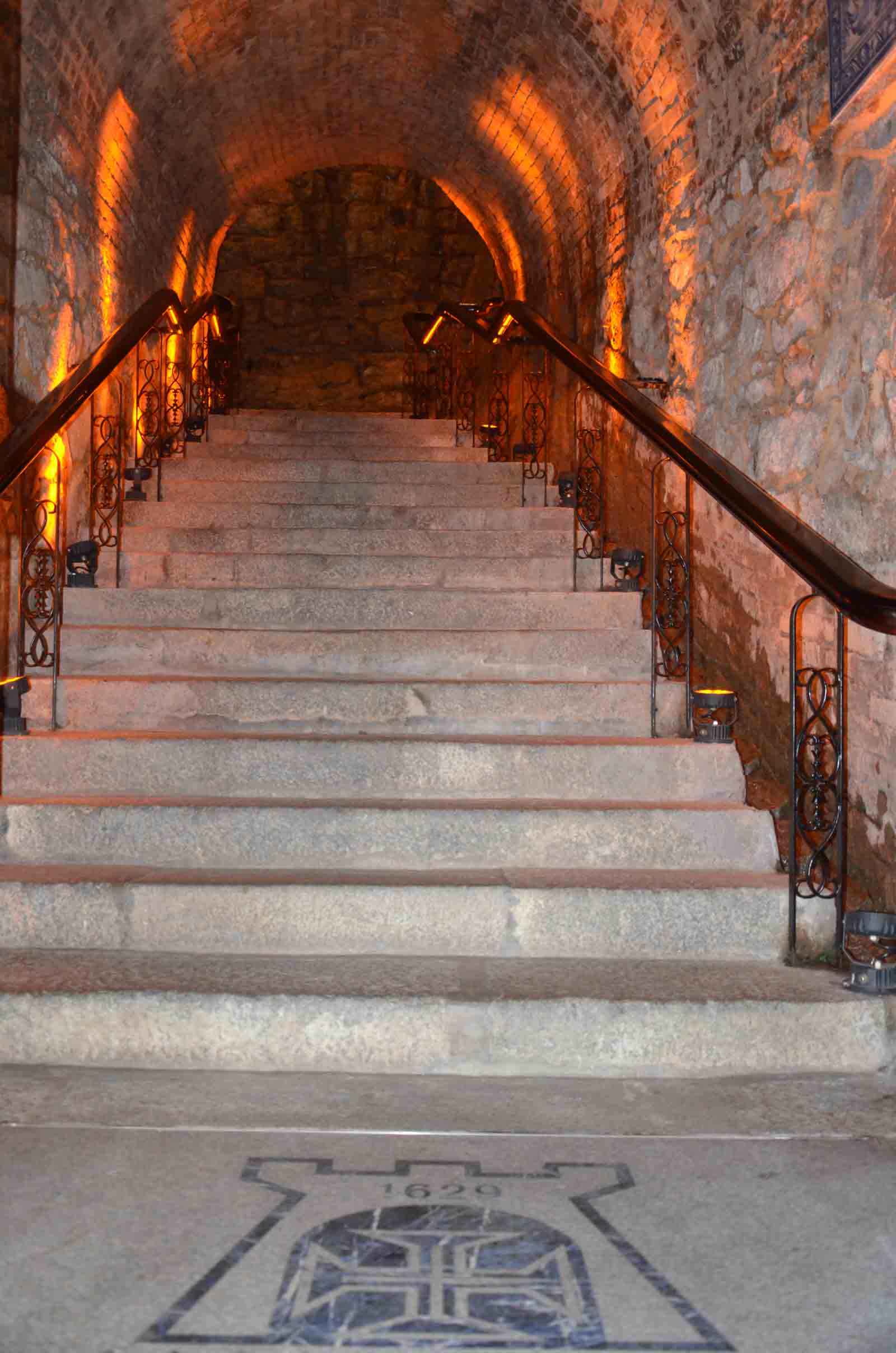