Until dining at Aji, I had no idea that Peru was once a popular destination for migrant Japanese workers, who set sail to the far side of the Pacific Ocean in search of better lives.

Much like Portuguese sailors who woke up one day in Macau and felt like having a good feijoada but lacked half the things they needed to make one, these displaced Japanese were forced to get creative too. And in the process of piecing together recipes from home, they inadvertently created with a brand new cuisine the world had never seen before. Welcome to Aji, where local South American spices, seasonings and ingredients are used to make traditional Japanese style dishes, a fusion concept known as “Nikkei”. 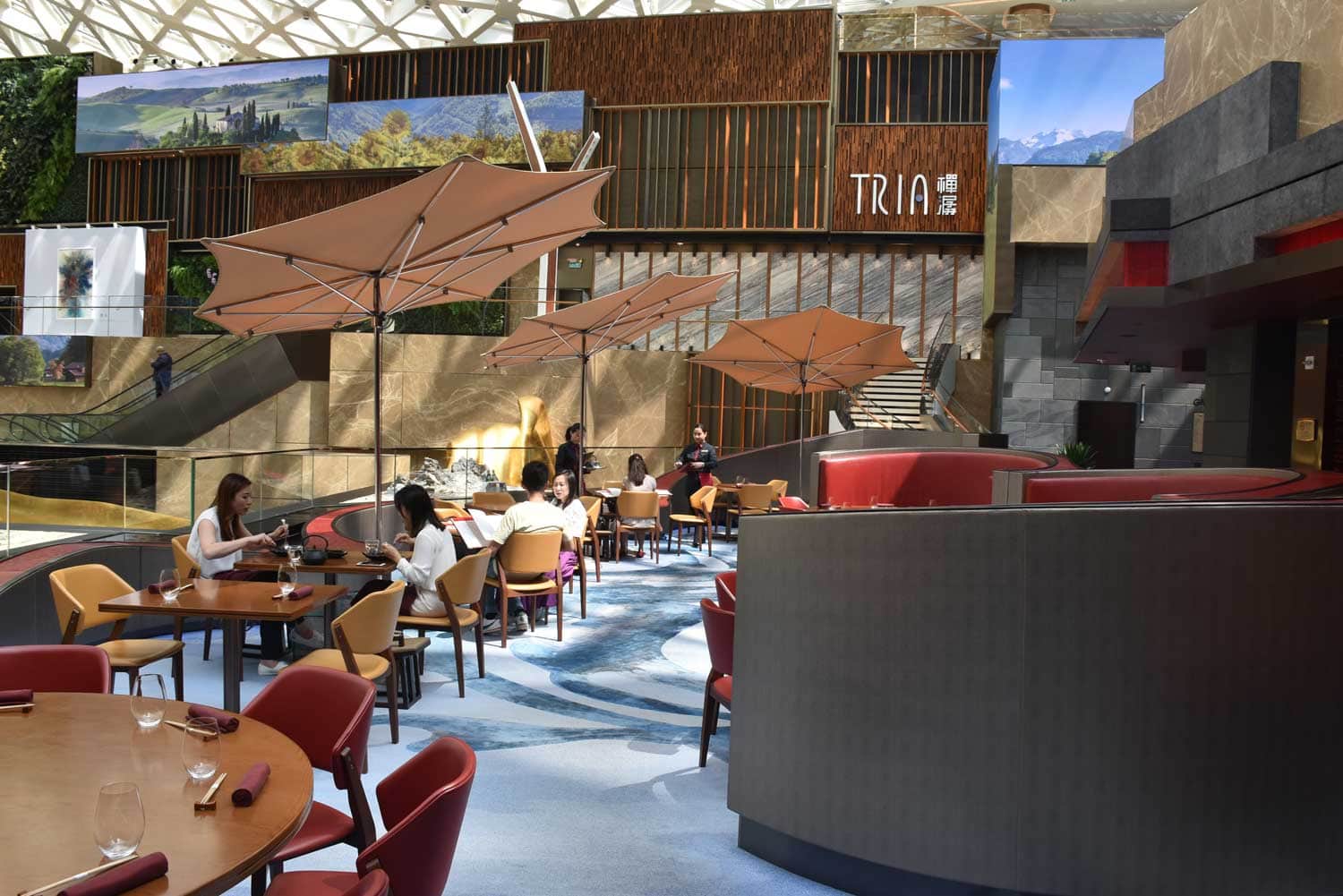 Opening in 2018, Aji hasn’t garnered any Michelin distinction to date, even though it’s far better than 80% of restaurants in Macau that have.  While I’m certainly no food expert by any means, I think I can adequately speak for the people when visiting such venues. To me, it all comes down to how well the chef can manipulate sometimes unusual or rarely seen ingredients in the most skillful and precise ways, and while service, presentation, cutlery, and environment all hold some importance, what ultimately matters most is how good everything tastes.

And I’m pleased to report that most of what we had at Aji tasted pretty damn special. 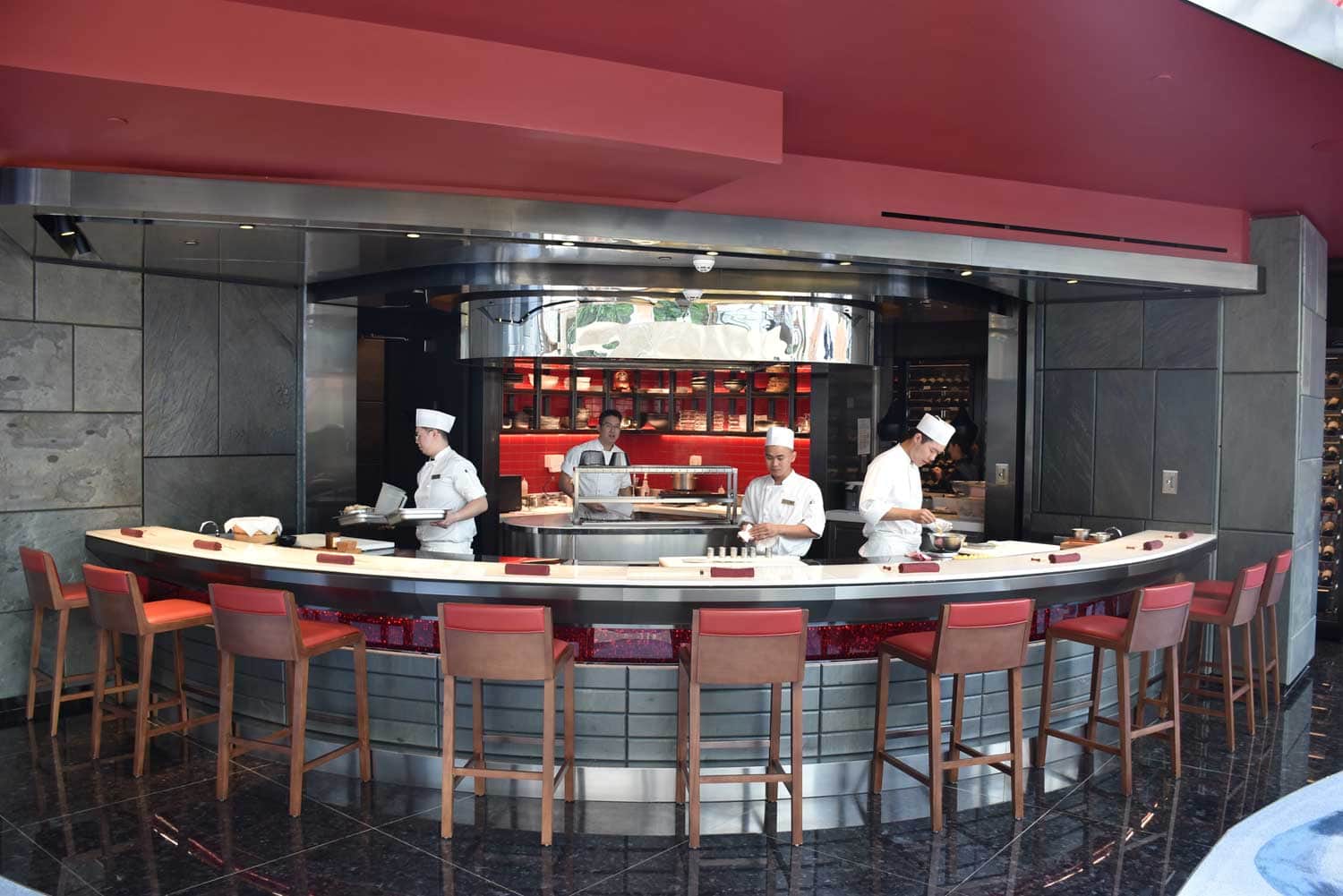 Dining in late 2019 with my good friend Lifa, AKA the Black Magic Woman, we tried their 4 course lunch special which ran $378 per person.

The amuse bouche got everything going on the right foot, a spring roll with beef and ponzu emulsion number that was sticky, soft, fresh and in the end, just delicious.  Unfortunately we couldn’t eat the rocks that came with it, but they looked mighty delectable too.

Lifa’s first course was a Gillardeau Oyster that was prepared in Tiger’s Milk that wasn’t really Tiger’s Milk, rather a spicy citrus infused marinade commonly used in ceviche. It also came with an onion salad called “chalaca”, as well as tapioca, a starch extracted from plant roots native to South America.

A little disappointing, there was only one oyster when two should have been served at minimum, while the strong notes of onion and lime overwhelmed everything.  Obviously they had to dress the oyster up in something, but onion and lime is not a fashion combination I would have went for, much like wearing red and green at the same time. Overall Score: 3/5.

I made a better choice with my first course Fish Causa, which was a simple Peruvian style mashed potato, mixed with black cod and lime.

It was propped on top of some rice crackers and avocado cream, which gave the dish fantastic depth and balance.  A stupendous dish, it was creamy, refreshing, crunchy, and straight out delicious. Overall Score: 5/5.

Moving on to the Hot Appetizers, Lifa made another mistake by ordering the Papa Rellena, which is potato stuffed with short rib beef. There was more chalaca (onion salad) on the bottom, with ricotta cheese and black squid emulsion on top.

The outside of the dish had a cake like consistency while the potato portion inside was thick and creamy, reminiscent of a potato salad. All along I was wondering where the short rib beef was, because it was hardly evident anywhere. In fact, if you gave this dish to a vegetarian, they wouldn’t even know they were eating meat. Too plain and pedestrian, it was another underwhelming 3/5 dish.

Keeping up with the pattern, my hot appetizer was miles better, the Pollito A La Brasa, a stuffed chicken wing filled with pork and prawns. Cress salad gave it some zest on the bottom, with some scrumptious chicken skin keeping it real on top.

An out and out masterpiece, the meat was soft and succulent, while the sauce was perfect, adding hints of barbecue and spice. The waitress told me it was polleria sauce, and even spelled it out for me, but I couldn’t find any info about it online. Whatever it is, it – and this dish – were all out spectacular. Overall Score: 5/5

Finally when it got to the main course, Lifa picked a dish she really enjoyed, the Lobster Catacaos. It was served in a sticky green coriander rice tamale wrapper that tasted somewhat similar to the Chinese zong zi (粽子) that’s eaten on the day of the Dragonboat Festival.

In my opinion it was an unnecessary addition, perhaps added just to please the mainland market, but Lifa didn’t mind it, awarding the dish 4.5 stars out of 5. One thing that we did agree on? The lobster sauce was totally amazing, and if it were ever to become available online, we’d both buy it wholesale and suck it down straight out of the bottle, preferably with our feet up while watching TV.

Finishing off the mains, I selected a Seafood Rice that came with squid, prawns, scallops, octopus, and coriander emulsion. Consistent in texture to a pasta or seafood risotto, the dish was unusually creamy and also a touch spicy, which I can only assume came from the coriander.

Whatever the case, the spice was definitely welcome and so was the shocking inclusion of green peas. Yes, Aji’s seafood rice is served with green peas and after trying it, I wondered why all seafood rice doesn’t have green peas too!  The way the peas played off the spice was spectacular, and it was another great selection.  The only problem was that for a main, there needed to be more of it.  Overall Score: 4.5/5

Our lunch ended with two desserts and I think sweets are a sneaky good way to judge Michelin type venues. If they’re truly on that elite level, the desserts need to be amazing too, and both of ours were out of this world. I had the Lucuma Amador, which is a traditional blade cookie made with Peruvian 70% chocolate, yuzu, lucuma ice cream, nuts, and cacao nibs. If you know what more than three of those things are then congratulations, but I had to look them up.

Yuzu is an Southeast Asian fruit similar to a lemon, while mochi is Japanese rice cake that’s a sticky soft mixture of rice and dough. As for lucuma, it’s a South American fruit close to a pear, also known as the Gold of the Incas.  Just perfect, it was super refreshing and not overwhelmingly sweet, with great crunch and some brilliant hints of corn foam and lime. Usually I say Asians can’t do desserts (at least Chinese anyway) but the Lucuma Amador was an easy 5 out of 5.

Lifa’s Tofu Cheesecake incorporated sweet potato, lemongrass, soy milk and ginger and this combination caused her to melt the second the spoon left her mouth. I don’t eat cheese – and never will! – so can’t attest to its greatness, but Lifa was gone, disappearing and dissolving in front to me, taken off to some other space and dimension. Wherever she went, math must be broken because she ended up giving it 5.5 out of 5.

It was without a doubt the highlight of her meal, afternoon, day, and last two months.  I’d never seen her so happy after eating something before, and this girl’s been places in Macau, including Macau Soul, Golden Peacock, Vic’s Restaurant, Lei Hong Kei, A Petisqueira, Antica, Cafe Xina, and Ka Wai Fast Food.  Okay, maybe we should forget about Ka Wai Fast Food, but it was only the Tofu Cheesecake at Aji that made the Black Magic Woman swoon into submission. 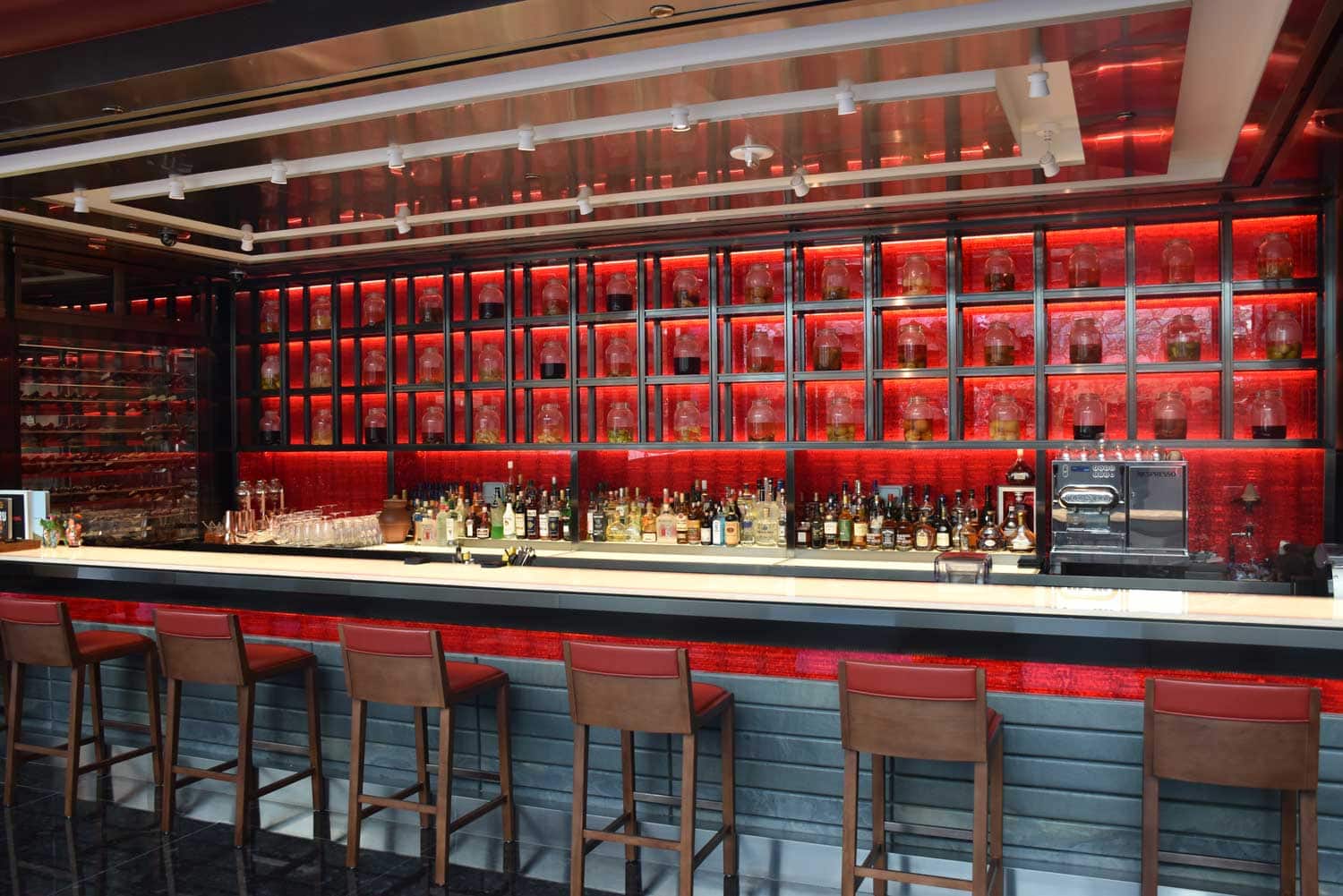 Aji didn’t get every single dish right, but 6 out of 8 is a success rate few can poke holes at. The greater take away is that it’s a true fine dining venue, where creative innovative dishes are the order of the day, and you will not get cheated either with service or quality. In particular, the waitresses were just phenomenal, super knowledgeable and very proficient at explaining the different selections and what went into them. I’m not sure if this lunch special will survive Corona, so check back later on that, but $378 a person was a very reasonable price to pay for a 4 course world class meal that few places in Macau can match.

Speaking as a man, Japan and Chile hooking up to make a woman truly sounds like the best of both worlds, who knew they’d do food so well too??