O Santos is one of the most authentic Portuguese restaurants in Macau.  Simple, down to earth and extremely homey, it’s not a place for fine dining, more like what you’d get if you went to your friend’s house for dinner.  (Assuming he or she is Portuguese and a big time soccer fan.) 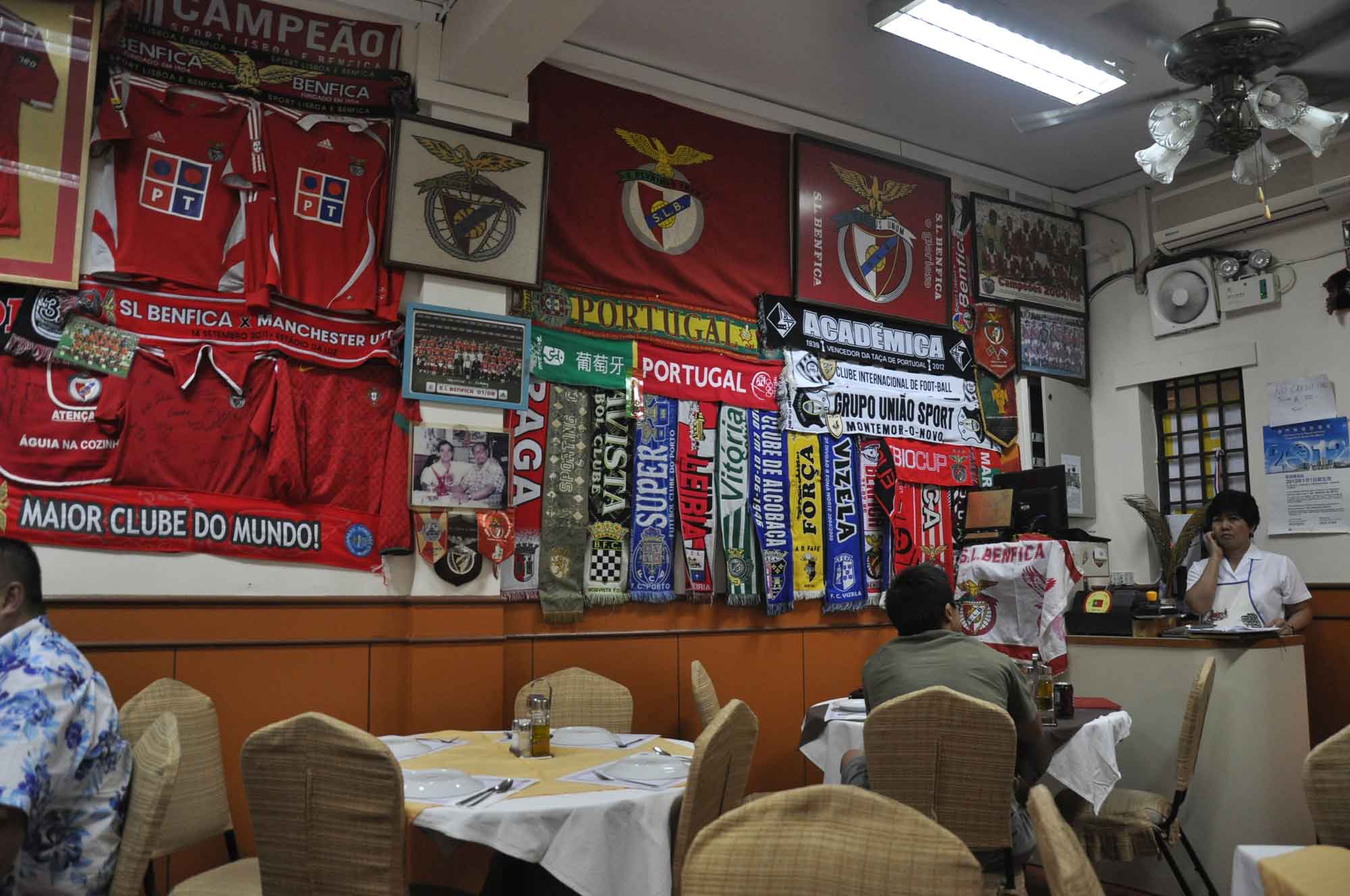 A look at their online menu also confirms this feeling: portion sizes are large and generous, while the dishes look like something you’d enjoy at a family barbecue.  Sure enough, the food I tried there tasted like something my mother could have made. 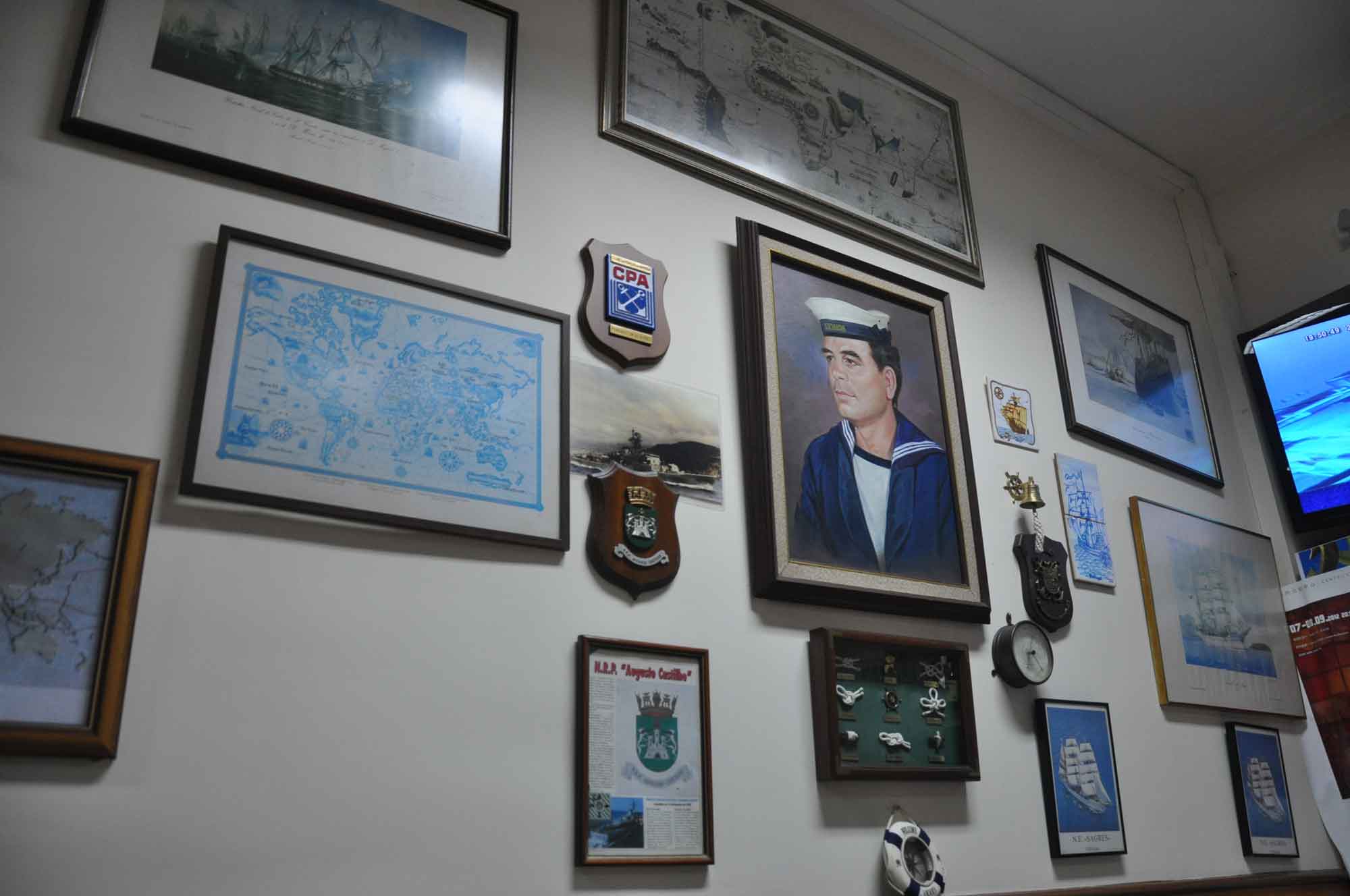 Overall I think O Santos food deserves a very solid 4 stars.  Authentic, down home, and totally unpretentious, consistency is surely the hallmark trait of this restaurant.  You’ll know what you’ll get before you order, because that’s how they’ve been doing it for over 20 years, and probably how they’ll keep doing it for 20 more.

With that being said however, it’s difficult for food made in this manner to completely blow your mind.  O Santos isn’t the place to pull Michelin heavies or ponder truffles and trifles for three hours, so understand that going in.

Highly rated by a lot of people and a favourite of the local Portuguese, O Santos is often busy, so reservations are a must during weekends and peak times. 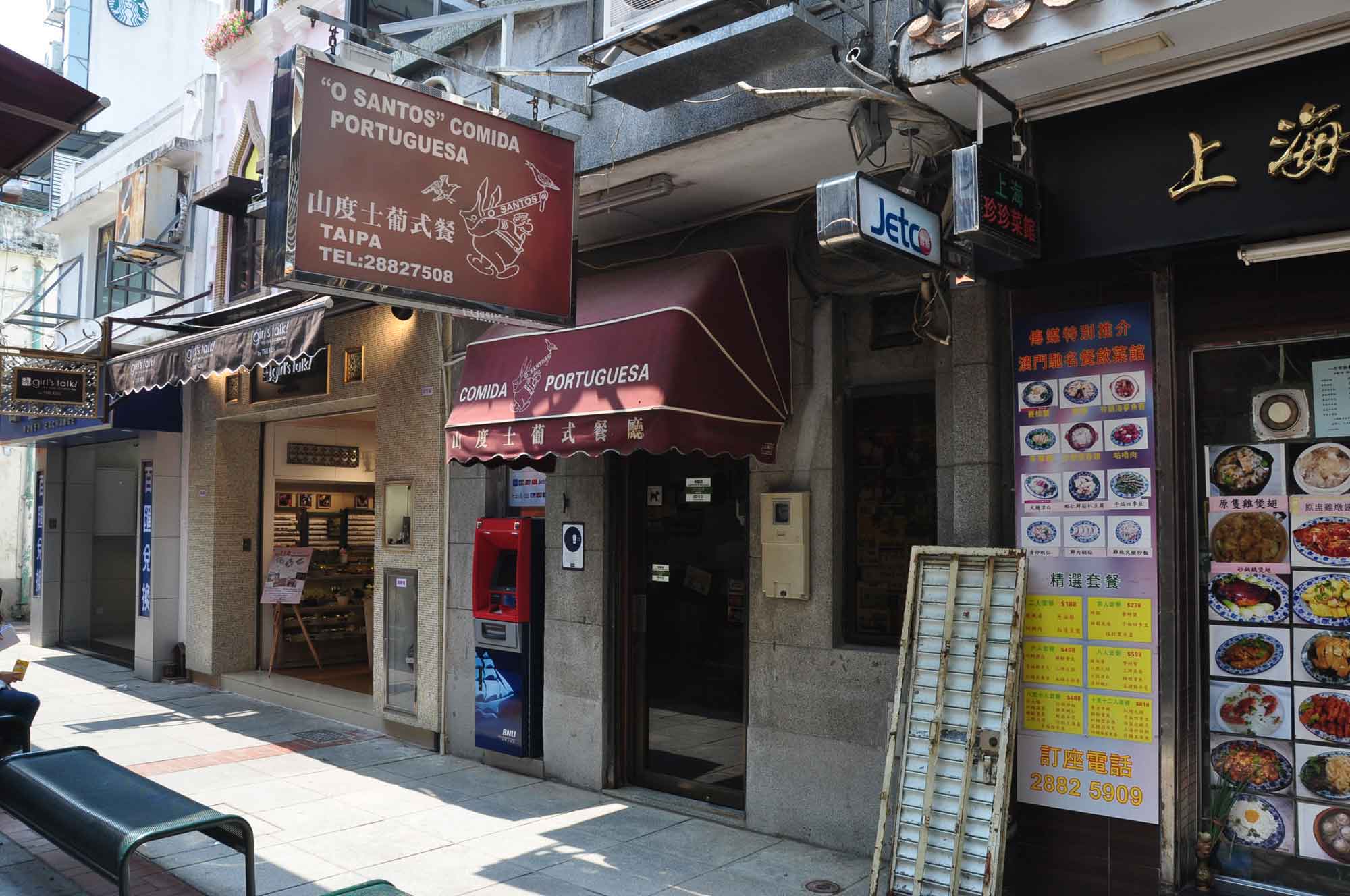 A fantastic value option in Taipa Village, O Santos is a place I’ll definitely return to time and again. A good meal at a great price is a wonderful thing.

My second visit to Santos basically reconfirmed everything I learned my first time there. I wasn’t interested in any of their appetizers so they did me a favour and turned two mains into two starters, by giving me half portions. They didn’t exactly charge half price though, ringing me up for $110 when I expected it to be $84, since both full size portions were $168.

Anyway, it was no big bother and I really enjoyed the Lamb Stew with Clams, a pairing I had never seen before.

Usually it’s Pork and Clams in this town but the lamb worked exceptionally well too, and given how good it was, Santos might want to consider making it a standard appetizer.

The second dish didn’t work as an appetizer, given how heavy the sauce was. The Lamb Stew Alentejo style was made from the same cut of lamb as the clams, but served in a thick tomato sauce instead, along with bread and potatoes.

The kind of dish that could feed a family, remember to order rice with it, just to soak up all of the rich beautiful sauce.

I finished dinner off with the Porco a Preto ($198), the Special Pork, a staple Portuguese dish made from the prized Iberian black pig. If it’s done right it has all the char, consistency and taste of a great steak, which I had the pleasure of enjoying firsthand at the outstanding Alfama Cellar in Lisbon.

Santos’s version came nowhere close that masterpiece, sufficiently lacking the soft texture and long glorious finish that all amazing steaks have.  In a good mood, maybe I’d give it 3.75 out of 5, but I wouldn’t order it again.

I don’t know if it was a billing error or not, but I was only charged half for the pork, even though I’m pretty sure it was the full serving.

I ended things off with two desserts: Home Made Ice Cream, which is actually Serradura and Chocolate Mousse, both of which were $40.

The serradura was pretty ordinary, too dry and flaky for my liking, while the mousse was right on point, deliciously deep and sweet.

Perhaps the thing to do is combine the two by piling the mousse on top of the serradura to make one superhero dessert.  That’s what I did and it improved the serradura tenfold.

Santos has a wide range of wines that vary in price, but the Bispado Vinho for $100 is pretty damn acceptable for what you pay. All told my dinner bill for one came to just $510, which probably should have been $598 had they added it up correctly.

I’ve recently gotten a couple of good tidbits about Santos: One, it’s better to go at lunch since everything is fresher then and two, go off menu by requesting the Crab Curry and Bacalhau Face. Both are said to be outstanding, and I will be trying both of them myself very soon.

True to my word, I returned in late March 2020 for those two dishes, making sure to visit at lunch, of course.  It turned out to be my last meal in Macau before Corona banished me forever (at least that’s how it currently feels) so at least I was able to go out on a high note.

Starting with the Bacalhau Face for $110 which was a half serving, it wasn’t as heavy and oily as most cod in Macau is, but it wasn’t phenomenal either. Maybe I didn’t get the full experience ordering only half, but I didn’t much care for the side salad of beans and sour vegetables, nor was the fish special in any way.  Bacalhau and I don’t get along as a general rule, so maybe I’m just the wrong person to ask.  I do try really hard to like it though, it just hasn’t worked out!

The Crab Curry was ordered off menu so I had no idea how much it cost, and was none too pleased when the bill came and said $488.  There’s almost nothing I’m willing to pay that much for unless it’s a steak or some huge mean bowl of feijoada that could feed 10 people.  No matter how you slice it, $488 is a A LOT of money for what turned out to be not very much crab.

It was also very difficult to eat, given you had to break open the crab shells yourself to fish out the meat.  I don’t go to restaurants to lift fingers (just glasses of wine), and getting to the crab was serious work.  It was also serious entertainment for Santos, a woman I assumed was his wife and all the waiters and waitresses, who watched me flail and flounder away, like a fish (or crab) out of water.  It got so bad that I was even given a bib, as the curry stained and maimed all four corners of the restaurant, the worst kind of golden shower known to man.

Santos was so bemused he even took a picture of me which he may or may not hang on his wall.  If he does I’d like to suggest the following caption: “Big Boy in a Bib, Enjoying his Crab Catastrophe”.

Yeah, it really was that bad.

As for how it was, the crab curry was well above average and a truly special dish, given how beautifully the curry and crab complemented each other.  As soon as you taste the curry, you think it could use a little salt and then the crab meat kicks in and provides just that.  If it wasn’t so expensive and hard to eat, I’d be completely behind it, but I don’t have the cash or skills to order it again.  Fans of the dish will certainly love it though, so long as they can handle the price.

For me, I’ll keep sticking to simpler fare that won’t get me forever immortalized on Santos Wall of Shame.