Speaking of lunch, our meal on Saturday was at the Rickshaw, a small local restaurant of considerable repute given its working class stature.  A bit off the beaten track, it’s located way up on Avenue Sidonio Pais, close to the Islamic Mosque and Cemetery.  Since Jane and I were staying at the Royal it wasn’t THAT far away, but it still took us about 15 minutes on foot.

The front door is down a little side alley so be sure to keep your eyes peeled for the big sign on the main road.  (Update: this is their old location.  Their new location is in the same building, just much easier to find, because the entrance is on the main road.)

The Rickshaw was doing a good business when we got there at noon, with most of the patrons sitting outside partaking in an early Saturday afternoon beverage. 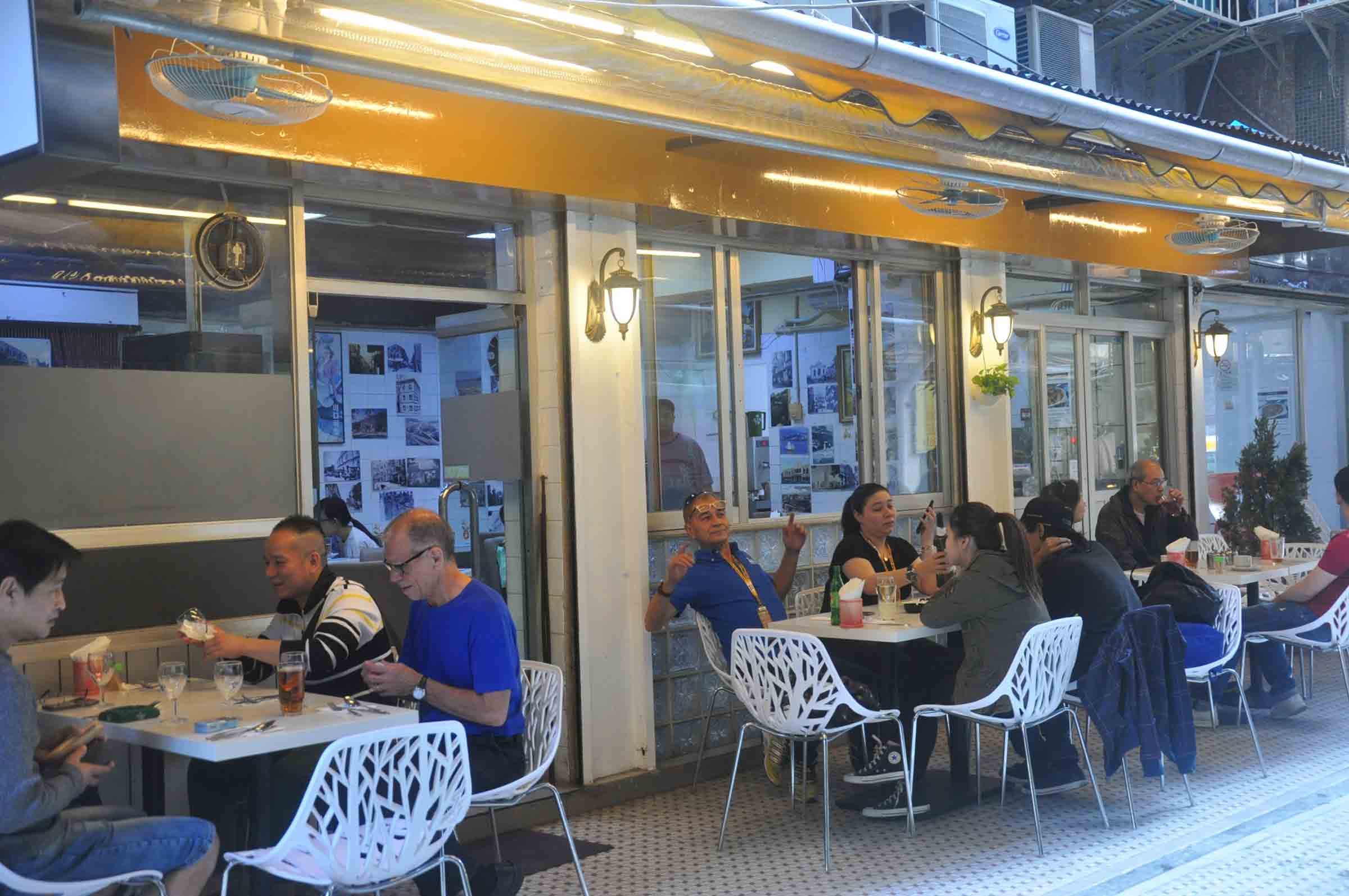 Jane and I also chose to sit outside as well, although the inside looked pretty inviting too, with all of the old memorabilia, photos and paintings of Macau on the walls. 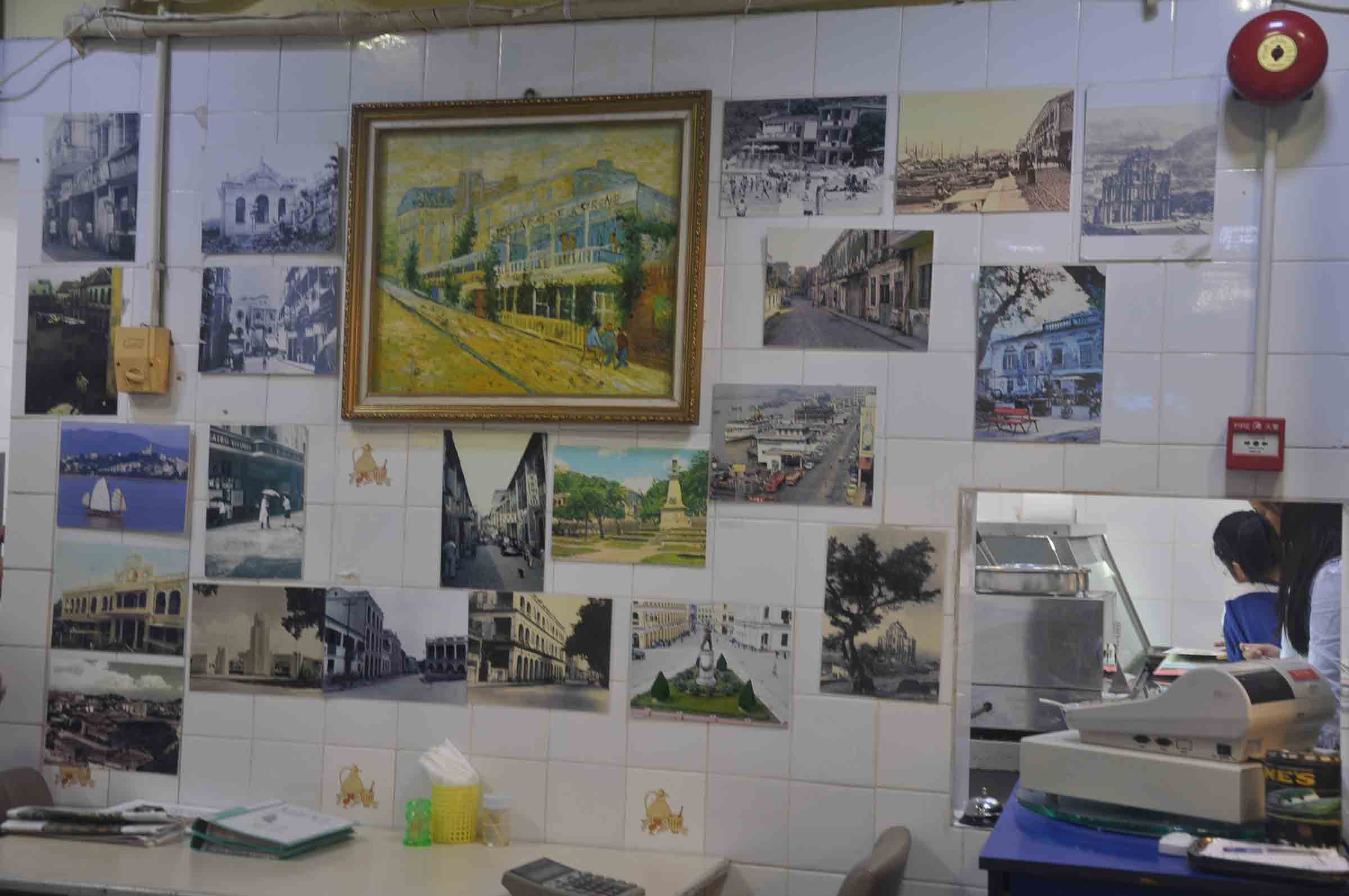 I didn’t know it at the time, but the Godmother of Macanese cuisine was sitting in the back, the venerable centurion, Aida de Jesus. 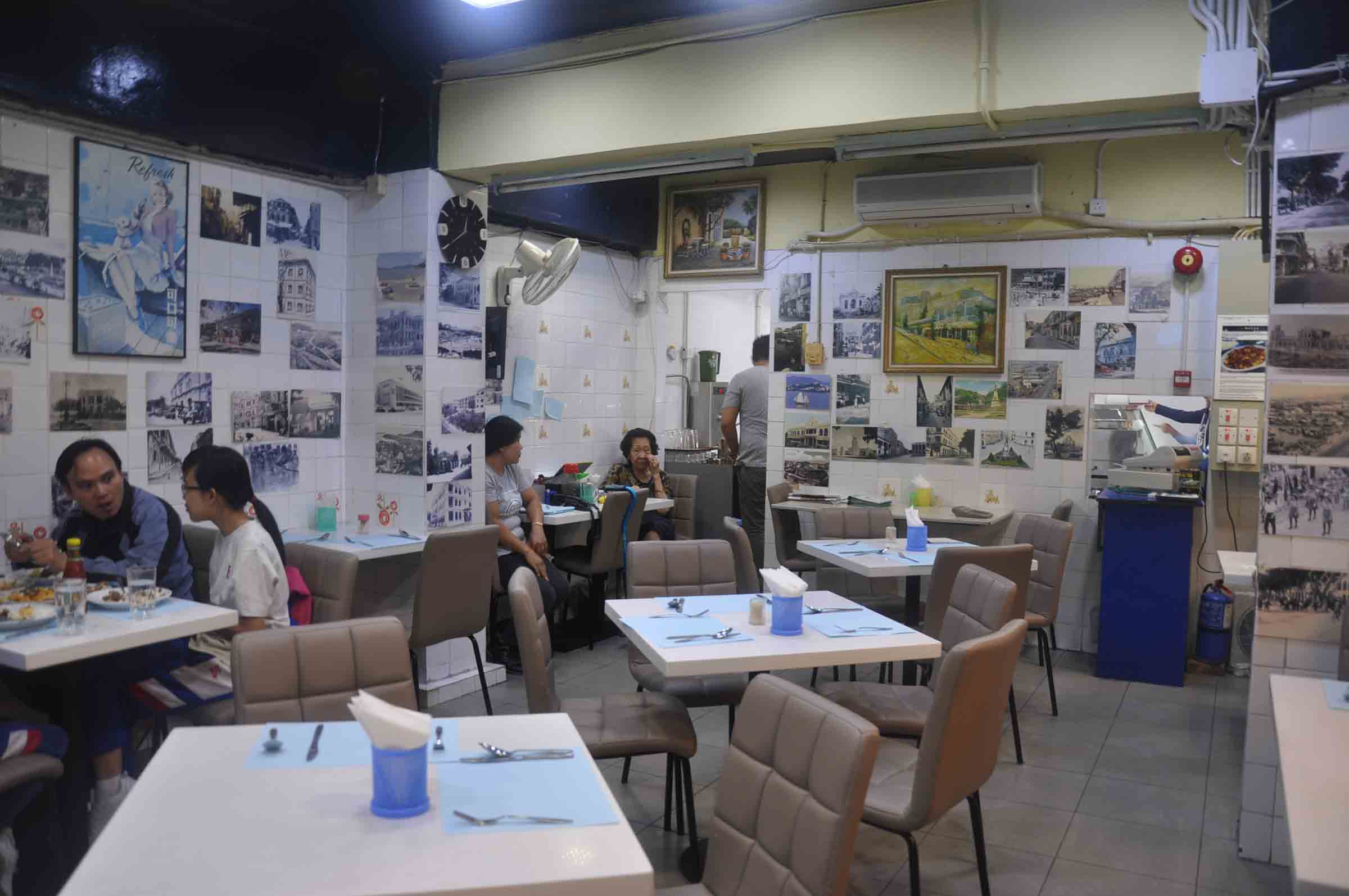 In this picture, she was still probably only 98, although I would have pegged her for closer to 75.  I’m happy to say that as of 2020, she’s still going strong, and you can still see her everyday in the Rickshaw at lunch and dinner.  One of the few people in the world who can speak the local dialect, Patua, she’s the real honest to goodness Maven of Macau, and I wish I knew a tenth of the things about Macau that she does.

Prices are excellent at the Rickshaw with most mains $60 to $95 while the most expensive meat and seafood dishes only top out at $120.  The best deal is the daily special for only $70 which comes with one soup, one main and one dessert.  Take away is also available and from what I’ve heard that selection is prepared by a team of Macanese grandmothers who cook it in the morning and then deliver it everyday before noon.  I don’t know if that’s just an urban myth or not, but I’d give the place more props if it were true.

Minchi is the Rickshaw’s signature dish so I went with it, while Jane tried the pork chop for $60.

My minchi was excellent, and the way it mixed together with the rice was a thing of beauty.

For those who have never had minchi, let me tell you, it can be maddeningly addictive, just like uncut H.  (Just kidding!)  The first few times you try it, you might think it’s okay and then leave it at that. And then mark my words, two weeks later, completely out of the blue, you’ll suddenly have a craving for it and won’t know why.  When and if that day ever comes, scratch that itch at the Rickshaw and you’ll be glad you did.  Jane also enjoyed her pork chop and cake as well, making our lunch there an unmitigated success.

Since my first visit there during this Grand Prix weekend, I’ve returned to the Rickshaw quite a few times and have never been disappointed.  A lot of people say Macanese food is dying but it’s alive and well there everyday.  I also enjoy the clientele that the Rickshaw pulls.  At dinner time there’s invariably a large sitting of 5 or 6 people, usually older patrons who slide in and out of English, Portuguese and Cantonese with minimal effort, depending on which friend they’re talking to at the moment.  Very obviously local Macanese or some seriously long tenured expats, the fact that they hang out at the Rickshaw is a far better endorsement than anything I could ever write.

All told, our meal for two came out to $213 which included a $55 half bottle of wine.  The food is not gourmet quality by any stretch of the imagination, but it’s good, cheap and anyone looking for real Macanese cuisine should give it a try.

All in all, I’ll give the Rickshaw a solid 4 stars across the board – 4 for the food, 4 for the venue and 4 for the nice staff.

For dinner, Jane and I tried Fu Lai Seafood, which is located down a small side street beside Camoes Park named Rua da Patane.  The owner of MacauSoul introduced this restaurant to me, saying that it served the same kind of food as He Fa, but for half the price.  Sounding like my kind of joint, Jane and I walked over from the Royal and got there around 7 pm. 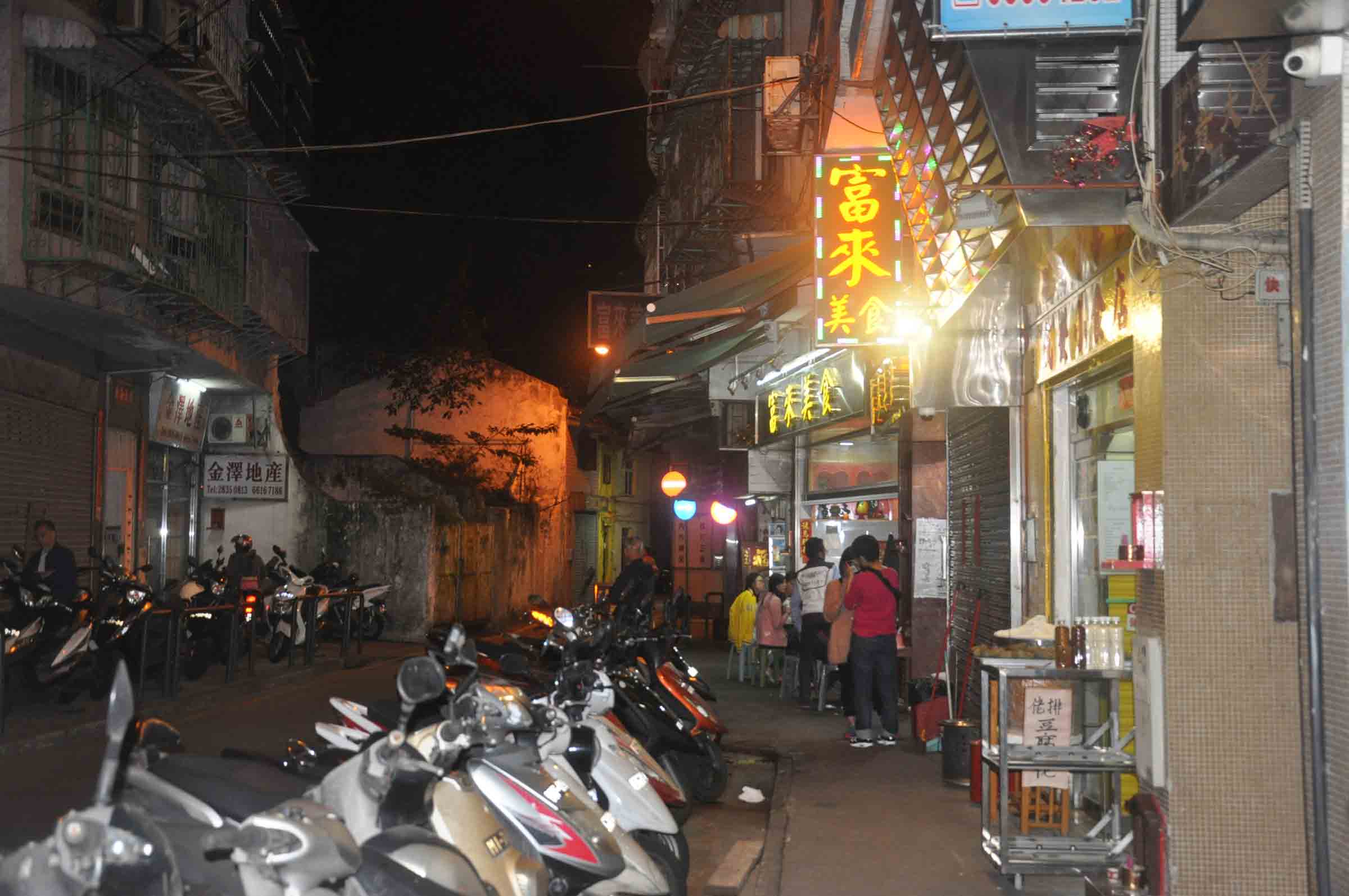 It was almost full when we arrived and a large line formed outside soon after, perhaps a sign that we had chosen the right place.  I let Jane take control of ordering because I’m hopeless in Cantonese restaurants and that goes double for seafood joints where issues like weight and measurement also need to be discussed.

Jane decided on one fish, one kind of clam that came with a shell, another kind of clam that did not, corn soup, fried shrimp and one vegetable.  (I’m sorry about the vagaries of those descriptions, but believe me, translation tools were of absolutely no use.  They spit out something that looked like Latin.)

The word I’m going to use to describe all the seafood we had was “flat” and I hope that you can understand what I mean.  If cola can go flat and if wine can go flat, then I think seafood can do so as well.

The shrimp and clams, in particular, were just weird.

It was like munching on something that was very obviously alive once, but wasn’t anymore, just the same as drinking Coke without fizz two days after it’s been in the fridge.

The soup and fish were bland as well, lacking both kick and taste, and neither Jane nor I could figure out why so many people were waiting outside.

The waitress was also a little pushy too, but in a completely unintended and almost friendly kind of way.  I think she saw me there and thought the foreigner should try everything on their menu and she kept suggesting this and that to Jane, which of course, she politely declined.

All told our bill came to an even $500, which would have been very reasonable for seafood, had it been any good.  Perhaps it was just an off night I don’t know, but you won’t catch me back at Fu Lai any time soon.  When I want seafood I’ll be kicking it at He Fa every day of the week and twice on Sunday, checking out the Inner Harbour as the sun sets and lonely junks come home.

To read about the two excellent restaurants we visited on Sunday, just click the link below!