The third trip story took place between January 26th to January 29th, 2014.  My photographer and travelling companion Mu Yi was busy working for this one so I made the rounds myself.  I wanted to focus on the older, more local side of Macau this time, which influenced my choice of hotels, restaurants and museums.  Over the 3.5 days, I only spent around 6500 Mops in total, making it by far the least expensive of the 3 Trip Reports.

If you’re travelling around Macau on a budget, and/or want to see a little bit of the history that’s still alive, then this is the travel story you should check out first.

I deliberately chose to come to Macau four days before the Chinese Spring Festival.  The city gets overrun with tourists then and hotels and restaurants jack up prices like no tomorrow, because they know they can.  In my opinion, it’s the worst time to be in the Macau, or anywhere in China, for that matter.  Other people can deal with the madness of 1.2 billion people all in transit at the same time, but I’ll kindly take a pass.  My new annual tradition is to spend the Chinese Lunar New Year in the comfort of my own home.  I lock the doors, barricade the windows, and wait the insanity out.

The main way to get into Macau from the mainland is via Zhuhai through the Gongbei border gate.  And I’ve noticed over the past year that the border crossing is getting crazier and crazier, especially on weekends.  When it’s really bad, it takes about 90 minutes to cross, while in faster periods, it still might take a half hour.  Here’s a little travel tip – when you pass through the Chinese side of immigration, always stand in the line marked Foreigners and Chinese.  Foreigners always take a lot longer to process than the locals who just whip right through.  If there’s a line of 20 Chinese or 10 Foreigners, I’m taking the one with 20 Chinese every time.  Once you clear the Chinese side all of your hard work is done.  There’s hardly any lines on the Macau side and when there is, they move fast.

Once you get into Macau, I recommend taking one of the free shuttles provided by the casinos to get wherever you need to go.  It doesn’t matter if you’re actually going to the casino or not, because no one ever checks anything.  For Taipa and Coloane, take any of the buses that go to the Cotai Strip, then hop a bus or taxi from there.  For the Macau peninsula, there are three principal stops, the Ferry Terminal (try a Sands or Oceanus bus), the Inner Harbour (the Sofitel bus) and the area around the Wynn and Grand Lisboa (those buses obviously, plus Starworld, MGM, Grand Emperor etc.)  Since my first order of business was to check in at the San Va hotel near the Inner Harbour, I took the free shuttle to the Sofitel, and then walked from there.  All told, the whole trip took about 25 minutes. 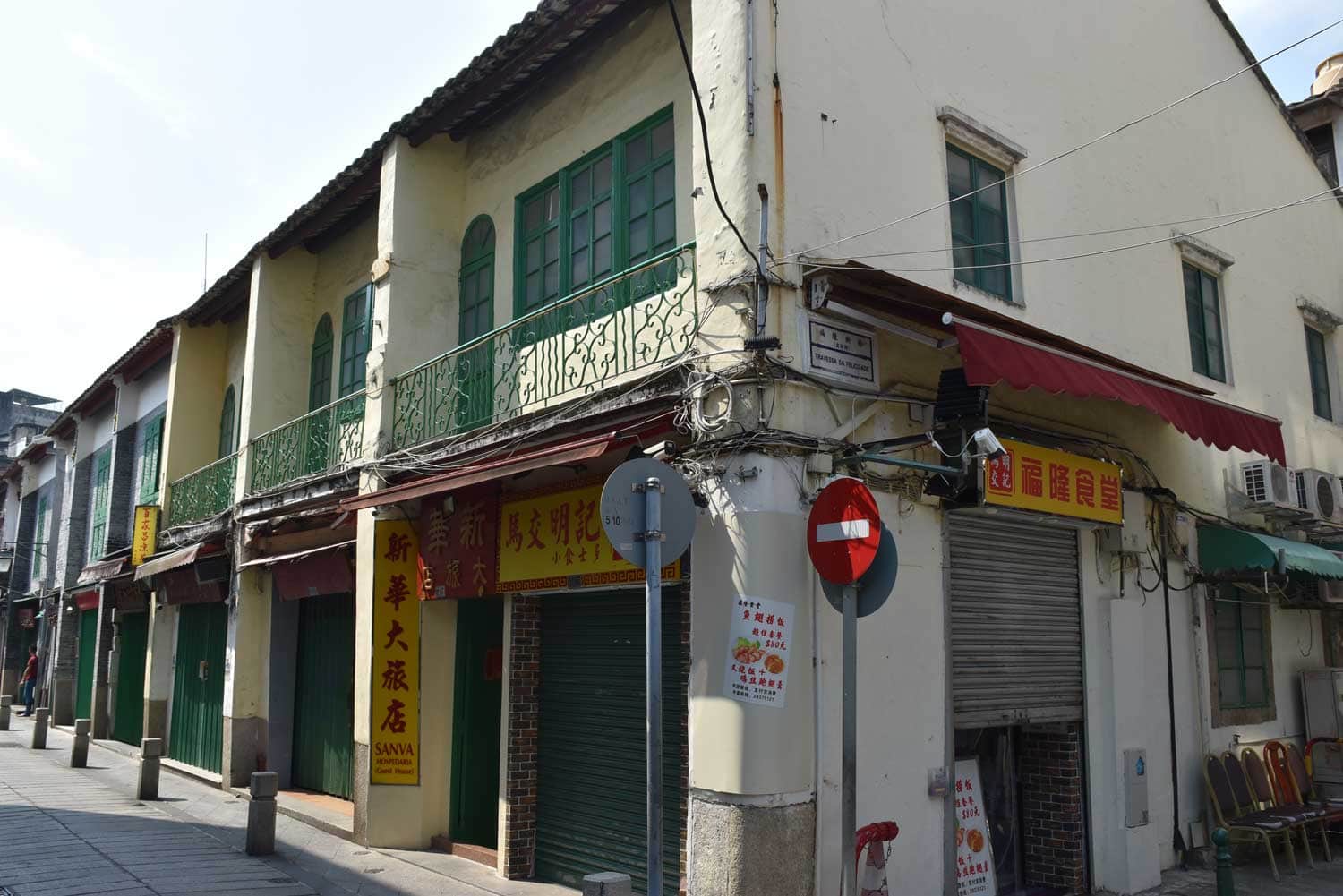 Situated on the former brothel street so aptly named “The Street of Happiness”, the San Va has two major things going for it: an absolutely phenomenal location and great rates.  Quite possibly the cheapest place in town, rooms are as low as $220 Sunday to Thursday and $320 Friday, Saturday and special holidays.  Here’s a full chart of all their room grades and fees, all taxes included.

I’ve stayed at the San Va probably well over 50 times the past 5 years so I’m quite familiar with it.  I always choose the Double Regular Room because it’s the cheapest one and room standards don’t improve much the more money you pay.  The only differences are that the rooms get a little larger in size and the Twin and Triple Rooms have more beds.  The balcony rooms may have balconies but you’re not allowed on them, so they don’t really matter. 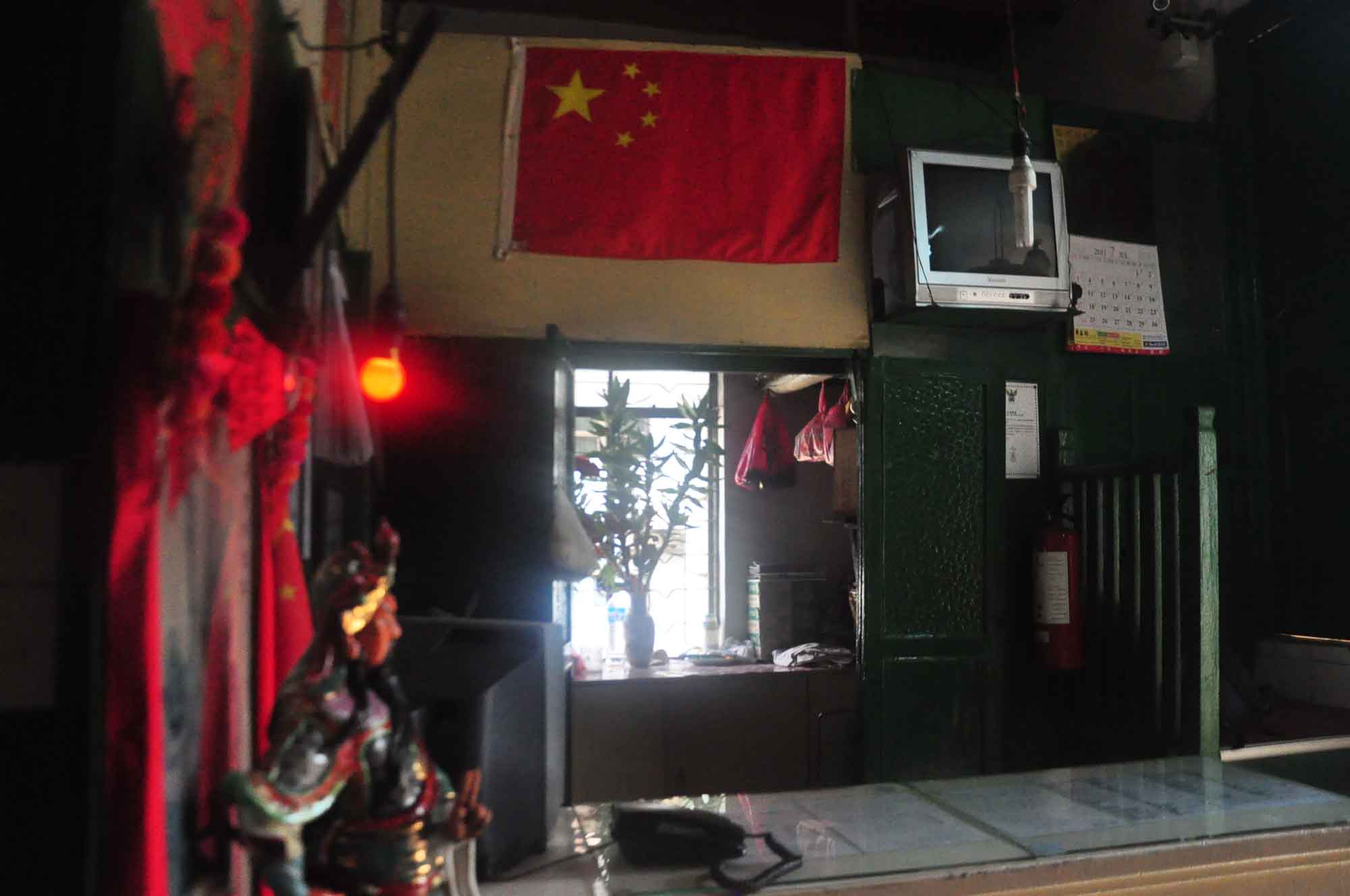 The only things provided in the rooms, no matter the grade, are two glass cups and one electric fan.  That means everything else you have to bring yourself: towels, soap, toothbrushes, shampoo etc.  The front desk’s English is extremely spotty so don’t expect advice or help on matters unrelated to checking in and out.  They recently added Wifi about a year ago, and is available free of charge to all guests.  Macau is pretty good in general for Wifi because the government offers a ton of hotspots around the city where you can get it for free.  For more information, just head to any tourist office and pick up the free brochure, or just check out their website here: Wifigo. 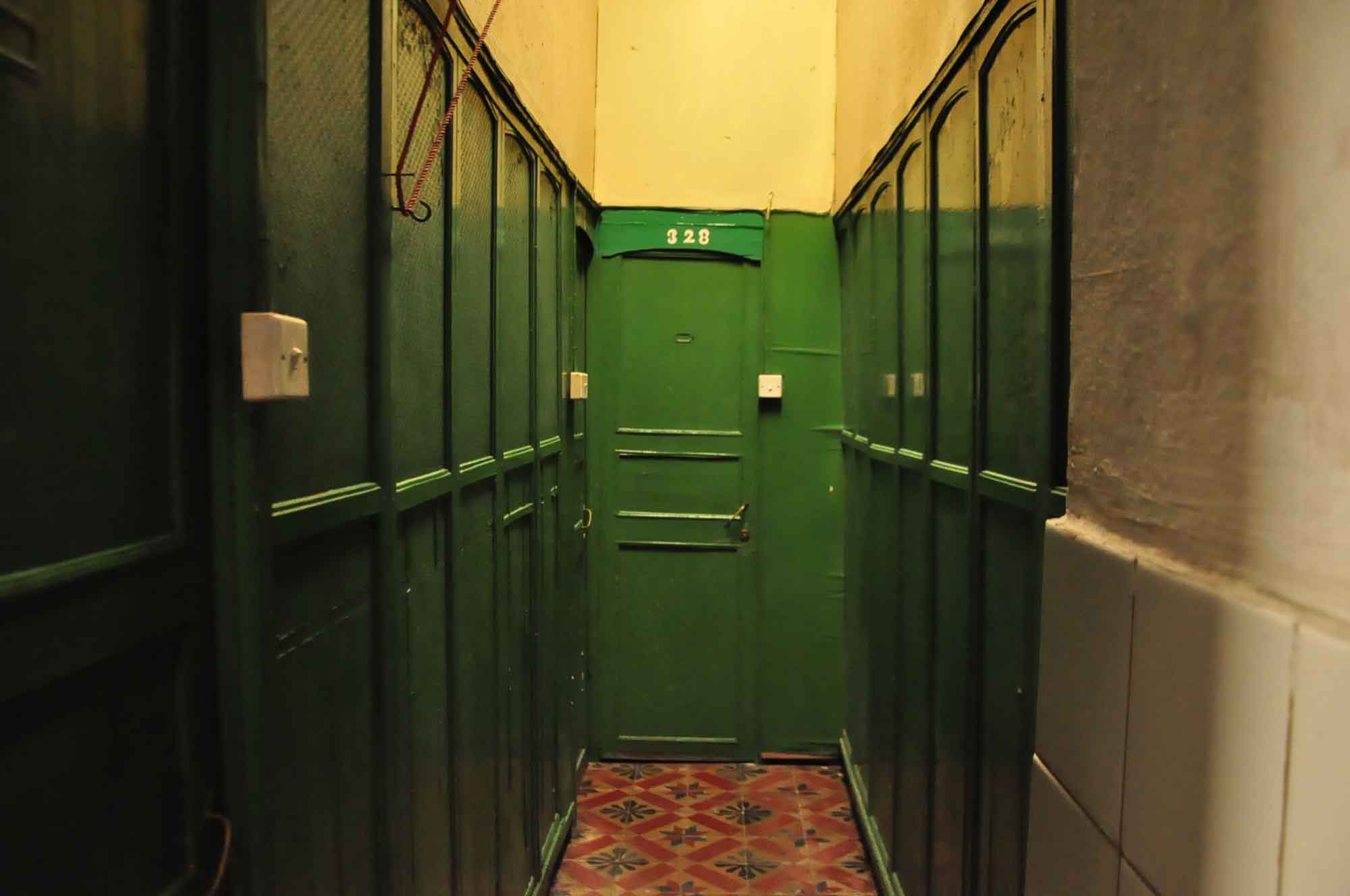 Built all the way back in 1873, the San Va used to be one of the biggest and most beautiful hotels in Macau.  That’s obviously not the case anymore.  I have more than a few friends who detest the place and refuse to live there.  In the summertime I actually agree with them and stay far away too.  With no air conditioning, the rooms can get so hot at night that it’s actually unpleasant to live there.  One little fan does not make a difference in a poorly ventilated room with no windows or air flow.  I’ve woken up there many a time in the middle of the night covered in sweat with a wine headache cursing myself for being so cheap.  Don’t make the same mistake. 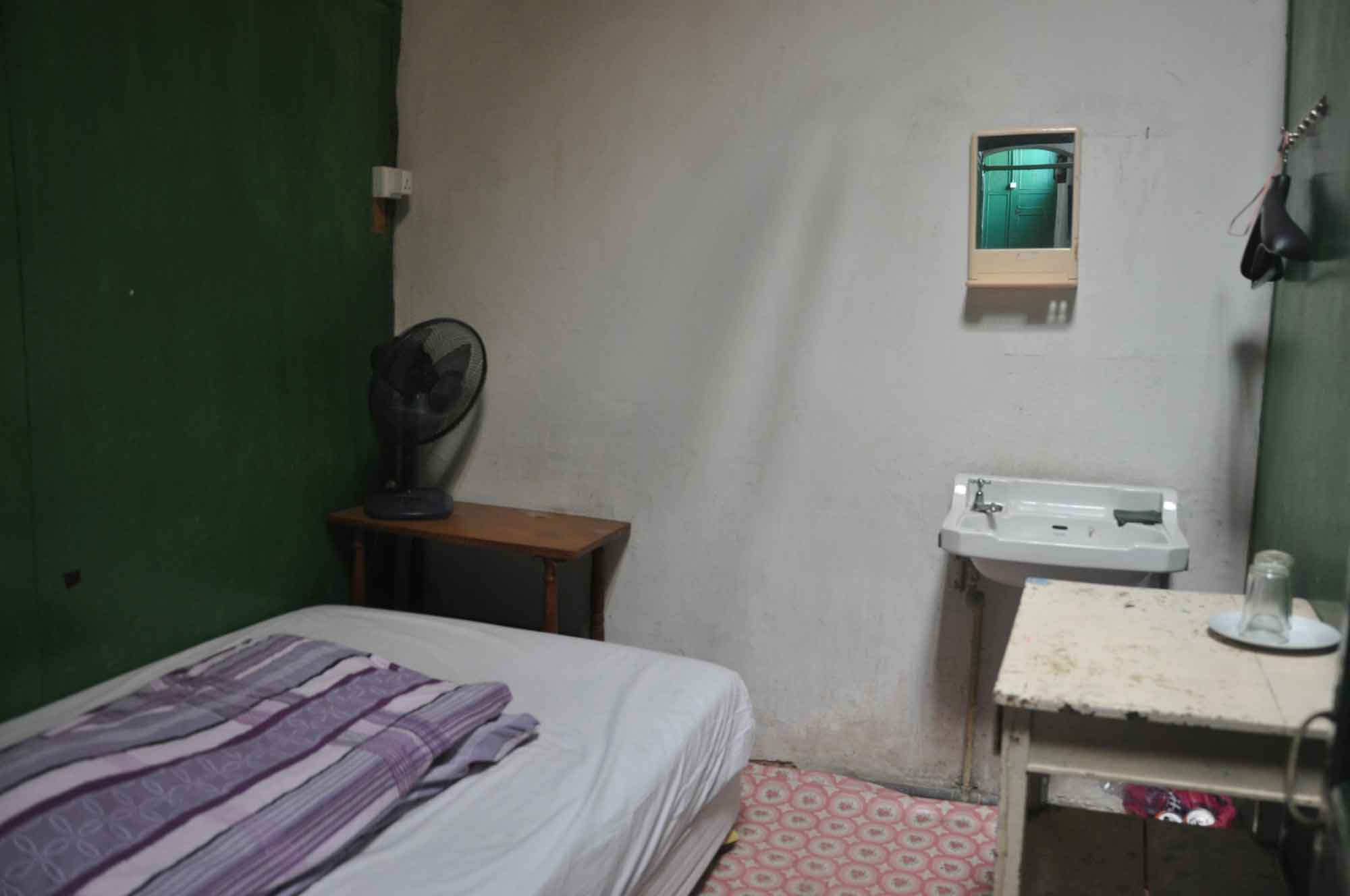 When the temperature drops however, I think the San Va does just fine.  At the same time, I realize that it’s not going to be for everyone.  The showers and toilets are shared so you’ve got to be able to deal with that. 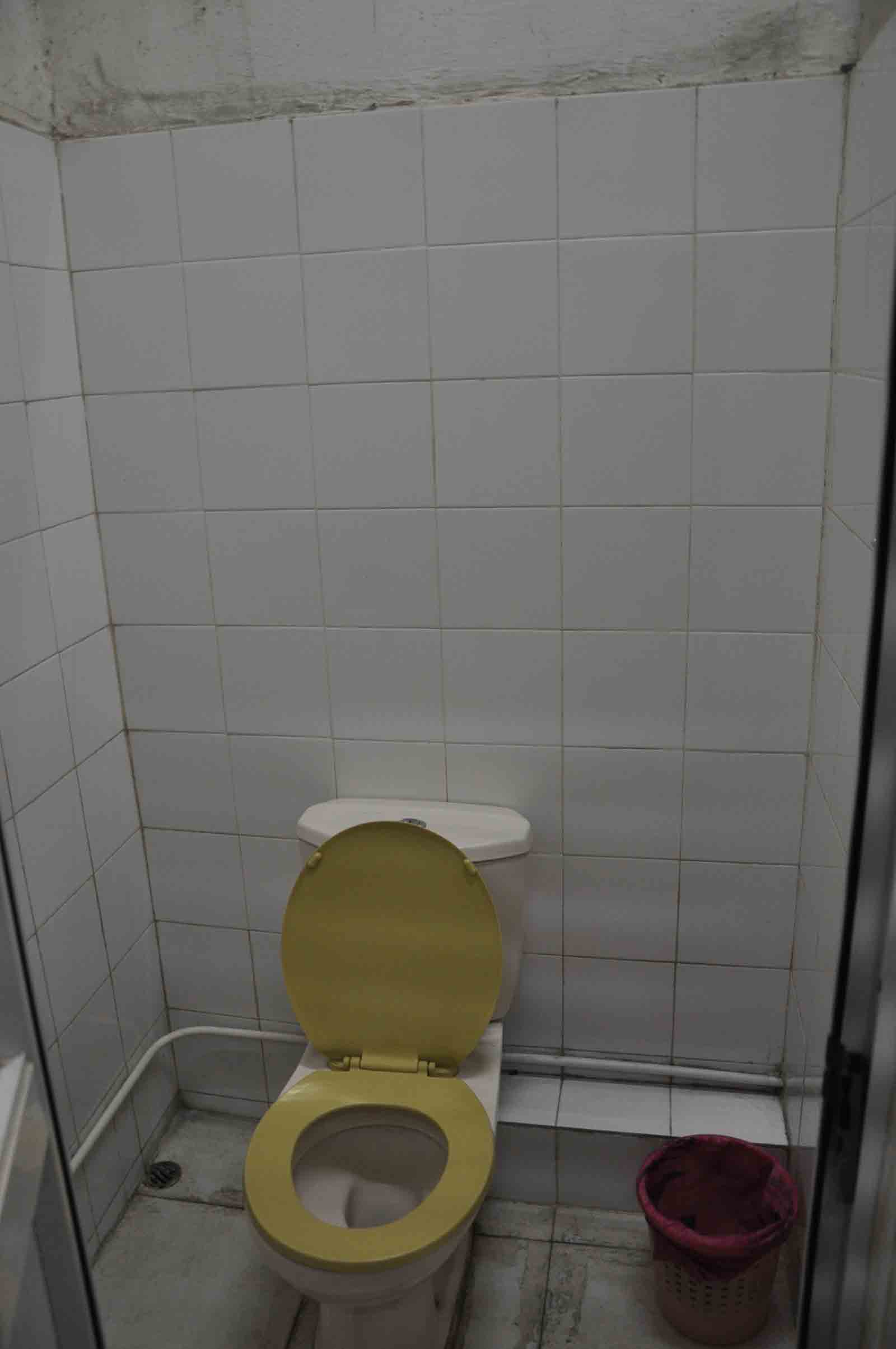 I don’t mind them because they’re kept pretty clean, water stains and wear notwithstanding. 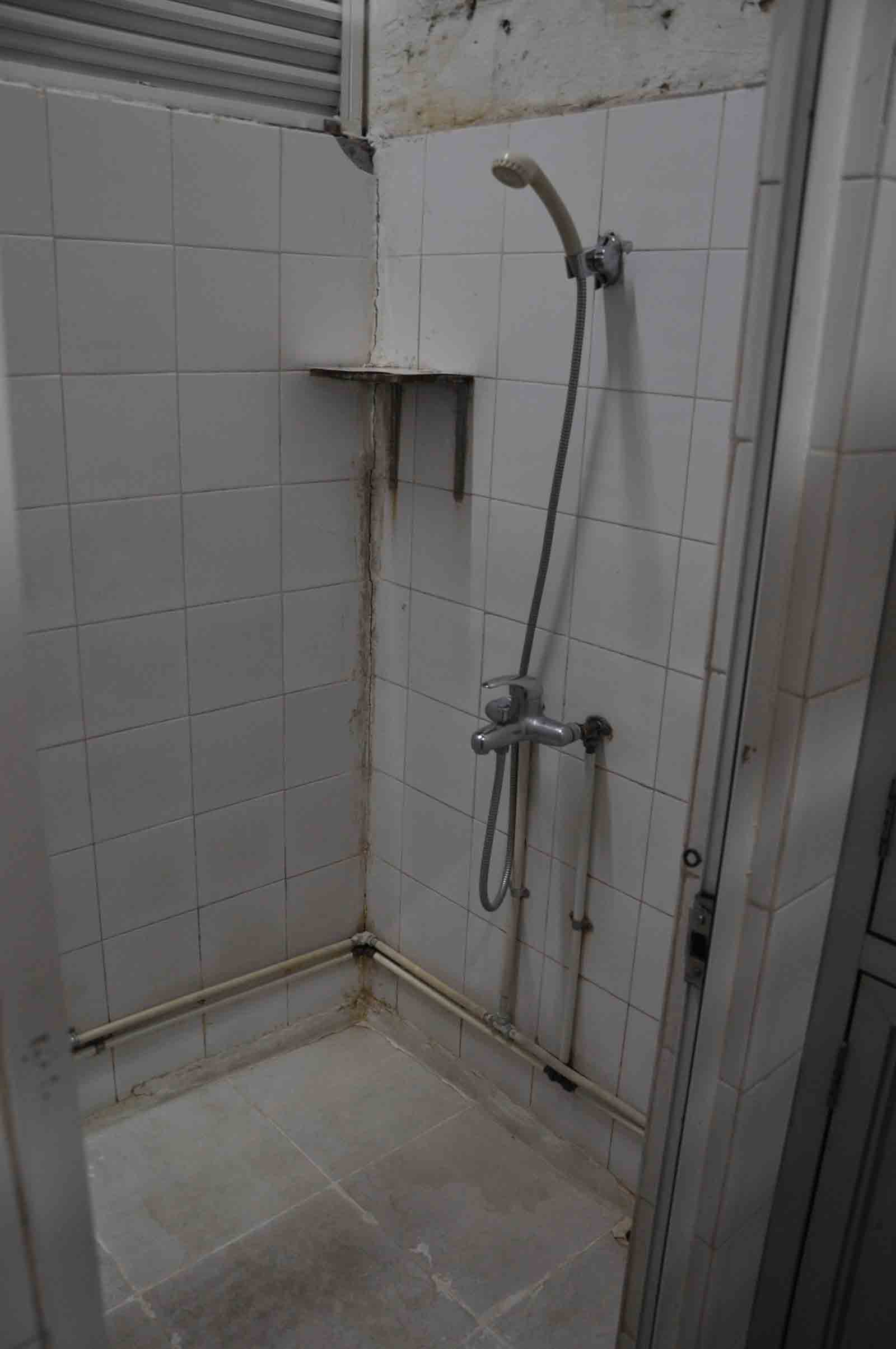 Obviously the rooms are threadbare and not what I’d call “nice”, but they’re good enough for me.  Your experience will also depend on what kind of neighbours you have since you can hear everything going on two, three, four doors down.  When people respect the rules and stay quiet, it’s okay.  When they don’t, it might get hard to sleep.

The San Va often sells out so it’s imperative you book in advance.  That can be done online at their website, www.sanvahotel.com, but reservations must be made four days prior to your visit.  Don’t write down a Yahoo email account either when filling out the form, because they won’t get back to you for some reason.

All in all, staying at the San Va is a very good deal, especially when compared the other “Hospederias” in the area, (aka brothels).  I keep returning there time and time again, especially when I have to be in the city for more than three or four days, and don’t want to spend upwards of $400 a night.  The hotel is clearly among the best value you’ll find in town, just so long as you can handle the conditions.

After checking in and getting settled, I took a walk over to the 5th of October Street and Cafe Nam Ping for lunch.

Many visitors who come to Macau today are naturally drawn to the Outer Harbour first, and probably spend most of their time there. That’s where you’ll find the bright lights of the Amizade strip and all the monster hotels that go with it, like the Wynn, Grand Lisboa, MGM etc. It’s also home to the Ferry Terminal and a lot of museums, such as the Art Museum, the Science Center, the Grand Prix Museum etc. In other words, it’s a main hub for tourists and most casual travellers probably just naturally conclude that this area has always been the main commercial and business district of Macau. I used to think that way as well, until I saw this map from 1889. 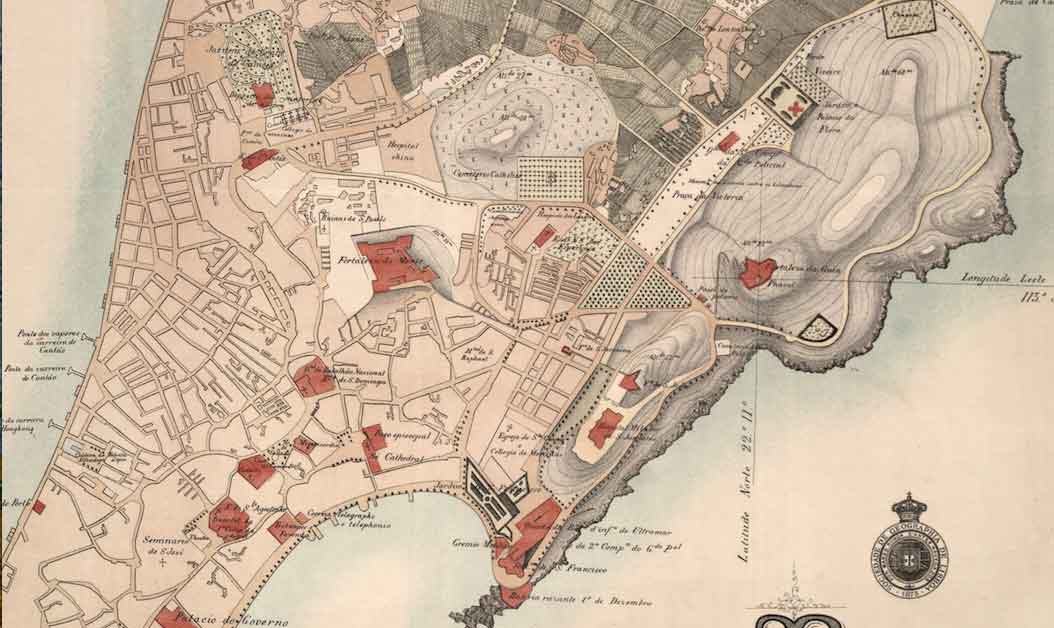 As you can see, the Outer Harbour as we know it today simply didn’t exist over 100 years ago. The city extended as far as Guia Hill and that was it, which also explains why there’s a lighthouse up there. Here’s what the area looked like as recently as 1989. 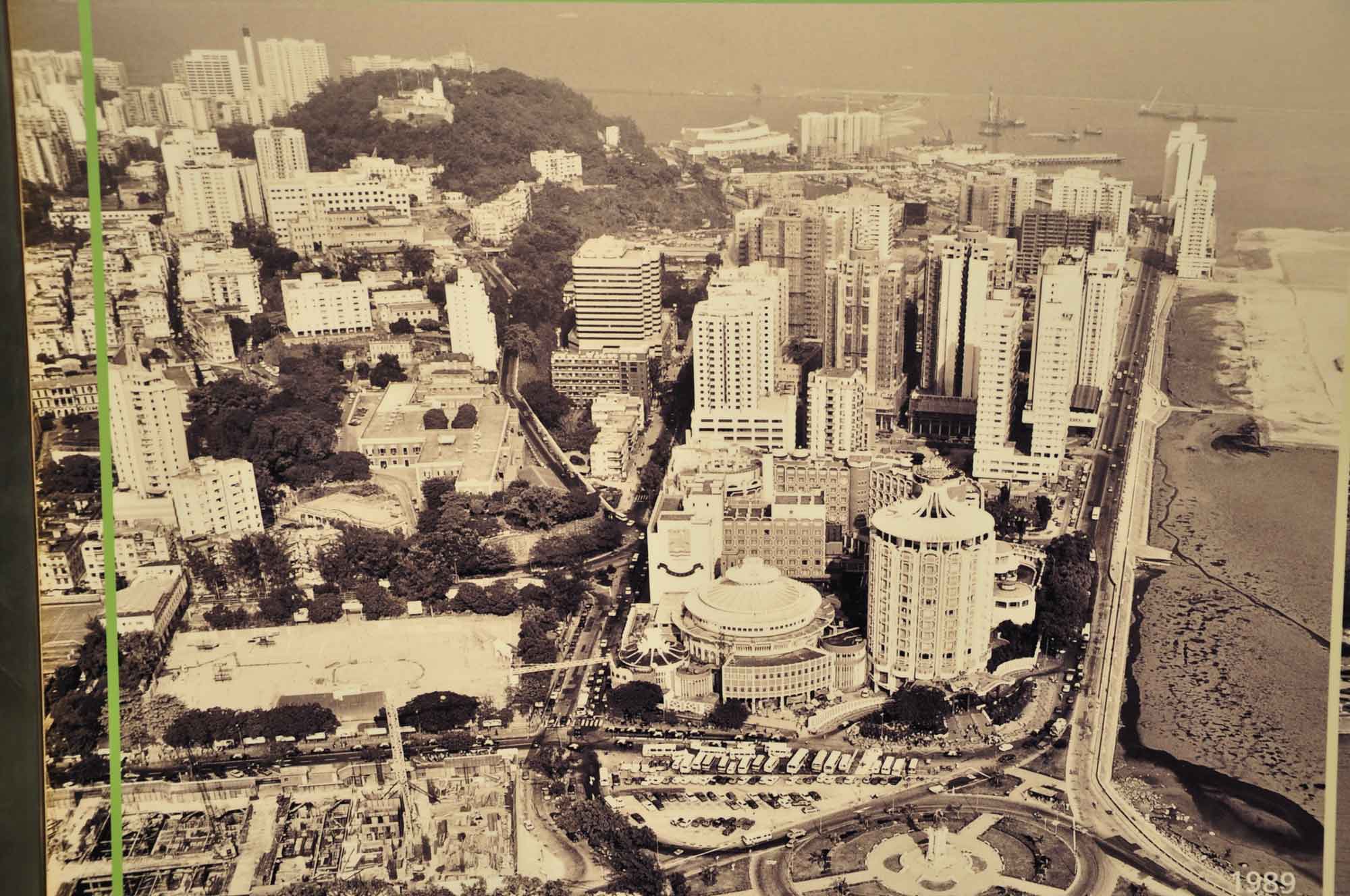 Further west, the Praia Grande was also totally different, as this beautiful drawing and photo from the 70’s indicates.

Anyway, for history enthusiasts and people who like old things, it’s obvious that the Inner Harbour, and not the Outer Harbour, should be your first port of call. There used to be a neat little book available at the Tourist Office that talked about this area, and in particular highlighted two of its main streets: Rua de Cinco Outubro (the 5th of October street) and Rua de Felicidade (the Street of Happiness.)

It also contained a lot of information related to different restaurants, bakeries, dessert shops, snack shops, teahouses and tea dealers found in the neighbourhood. I chose four of those restaurants from the book to be my dining choices for this trip: Cafe Nam Ping, Tai Long Fong, Mou Kei and Southwest. For the first day, I started off with Cafe Nam Ping, located on Rua de Cinco Outubro. 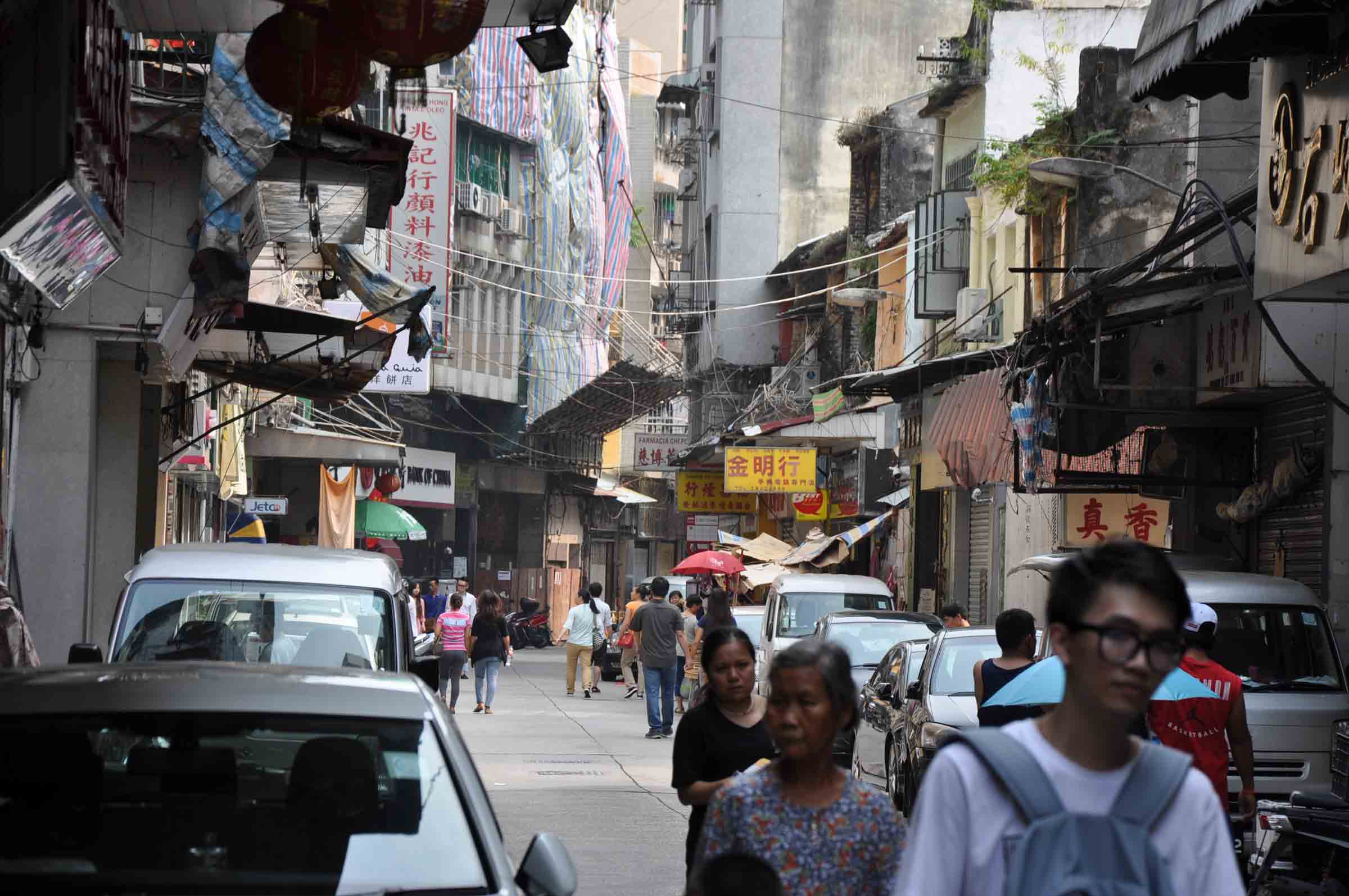 Rua de Cinco Outubro, or the 5th of October street, was originally named Rua Nova-del Rei, modelled after a Rua Nova street in Lisbon that was a centre of Asian business and commerce. Its name was changed however after the success of the 5 October 1910 revolution, which toppled the Portuguese monarchy in favour of the First Portuguese Republic, which would only last for 16 tumultuous years. 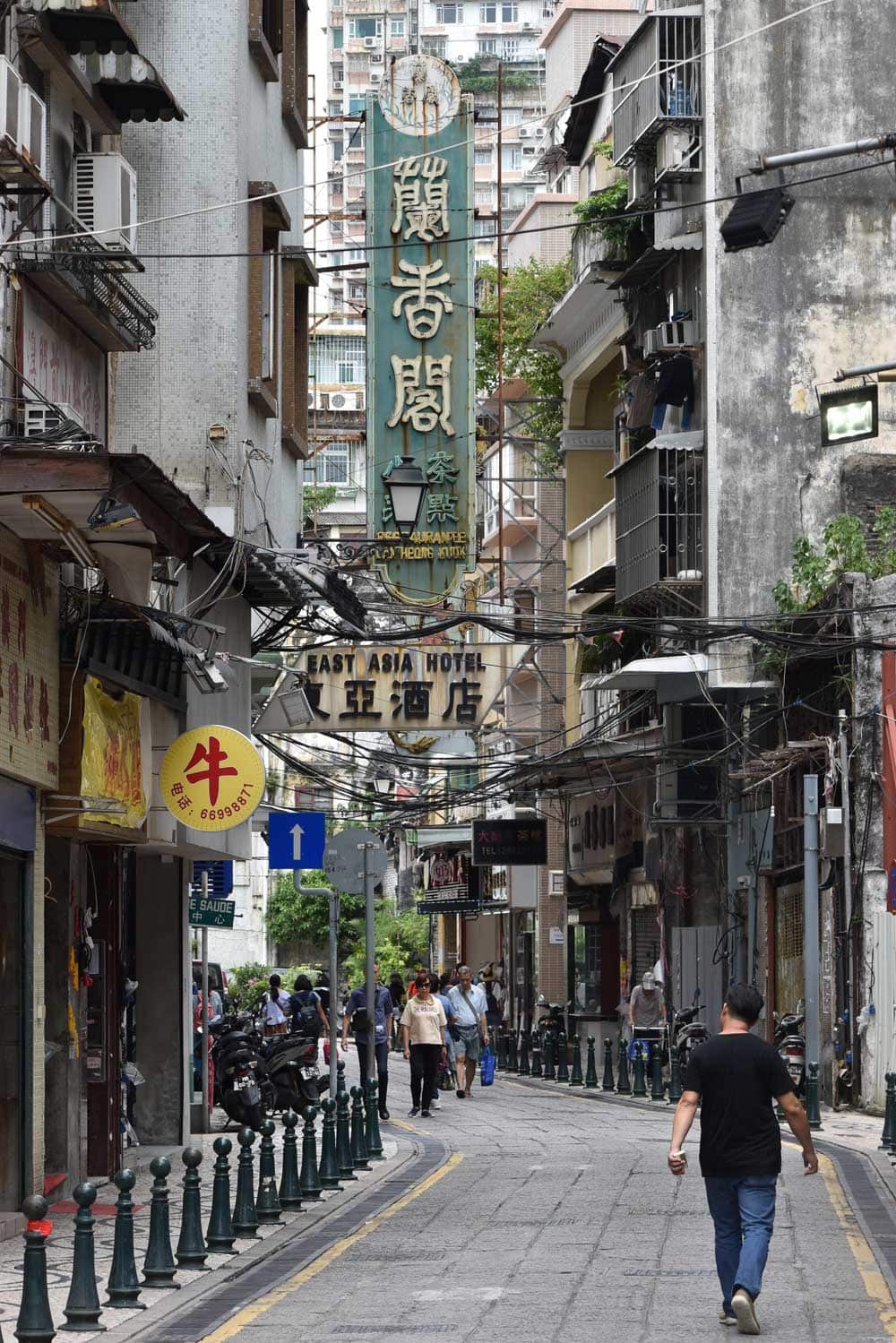 The most famous victims of the revolution were the Portuguese King Manuel I and his son, the heir to the throne, 20 year old Prince Luis Felipe, who were assassinated by Republican Nationalists on February 1st, 1908. Quite why the “City in the Name of God, There is None More Loyal” would choose to memorialize a revolution built on the back of a regicide is unclear to me, but maybe they were sick of the monarchy too by 1910. (Interesting side note: King Manuel’s full name was Manuel Maria Filipe Carlos Amélio Luís Miguel Rafael Gabriel Gonzaga Francisco de Assis Eugénio. Try saying that ten times fast! Imagine how long it would take to sign your name, you’d be there half a day! Your driver’s license would take up five cards.) 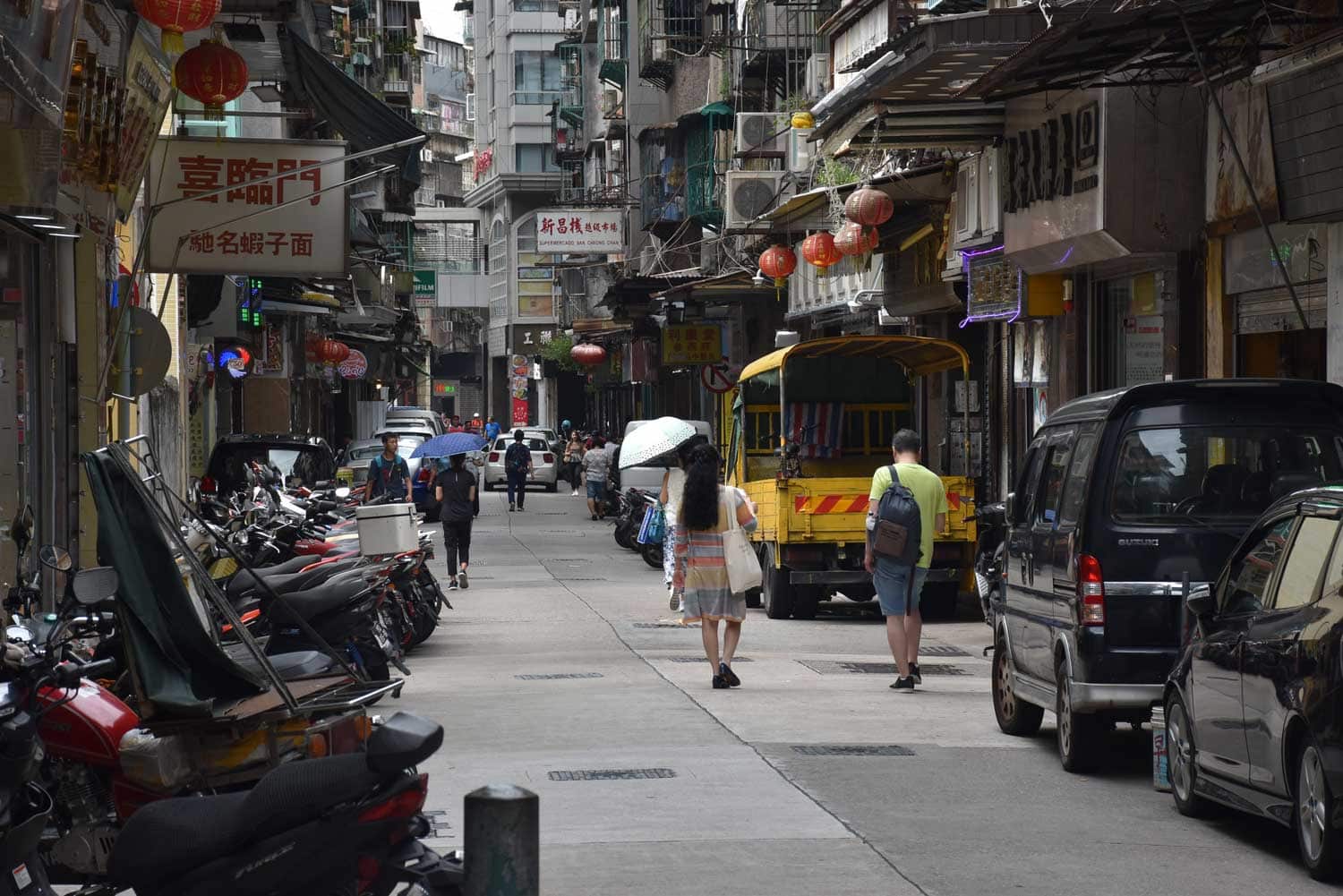 Rua Cinco de Outubro used to be the heart of Macau’s downtown district, and probably looked a lot better 40 or 50 years ago than it does today. Back then major industries called this street home and there were a ton of hawkers everywhere selling fruits, vegetables and other household goods. Nowadays it looks like a lot of other streets in the area, run down and ragged, one you’d never think was ever prosperous. 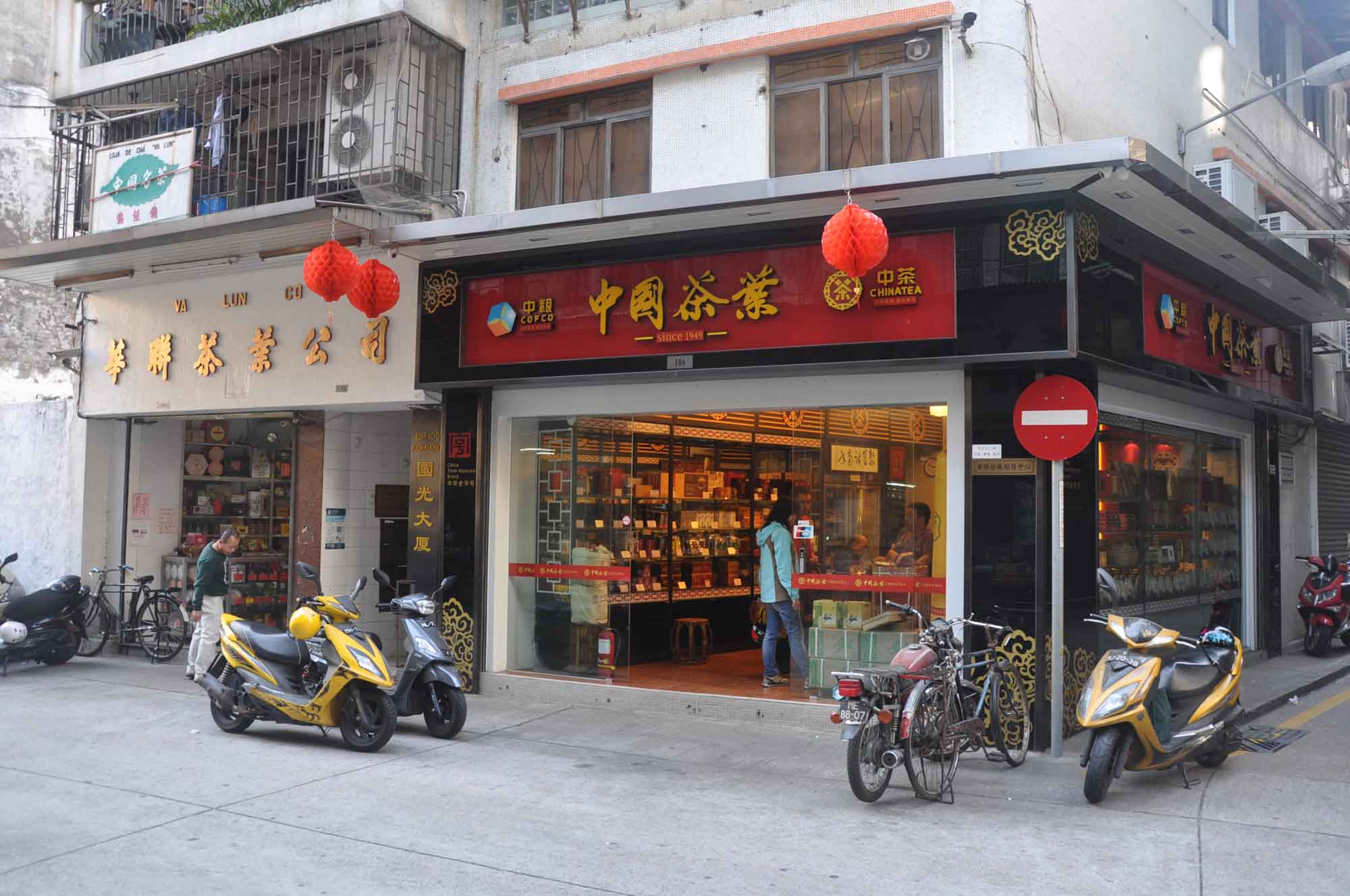 Unlike Senado Square and the Street of Happiness which have been remodeled and refurbished, the 5th of October street has been left to its own devices and it shows in its odd juxtaposition of old businesses and new shops. Viewing them side by side makes for quite the interesting contrast, like being in 1964 and 2014 at the same time. 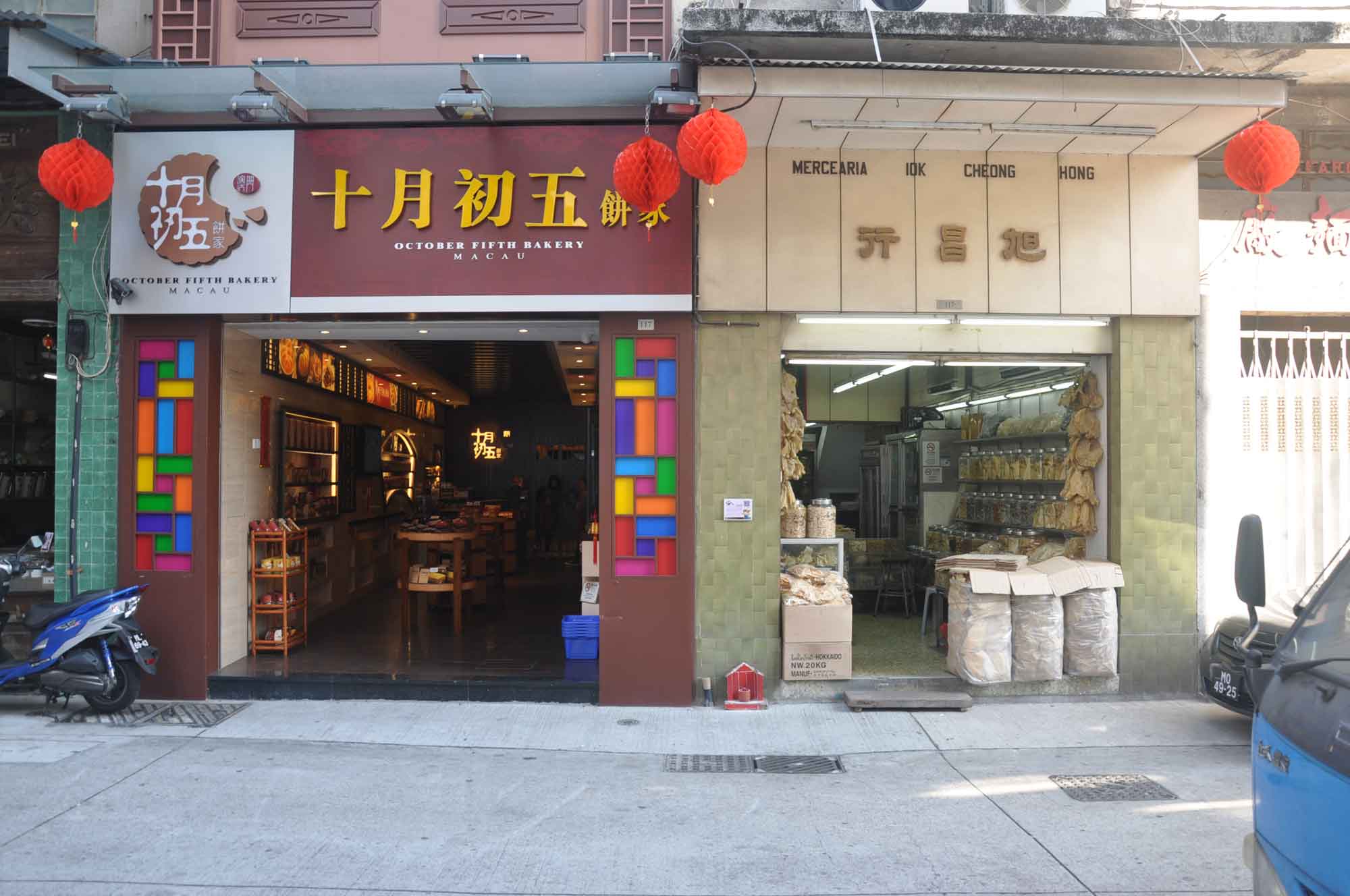 The oldest building on the 5th of October street is probably Hong Kung temple, which dates back to 1860. 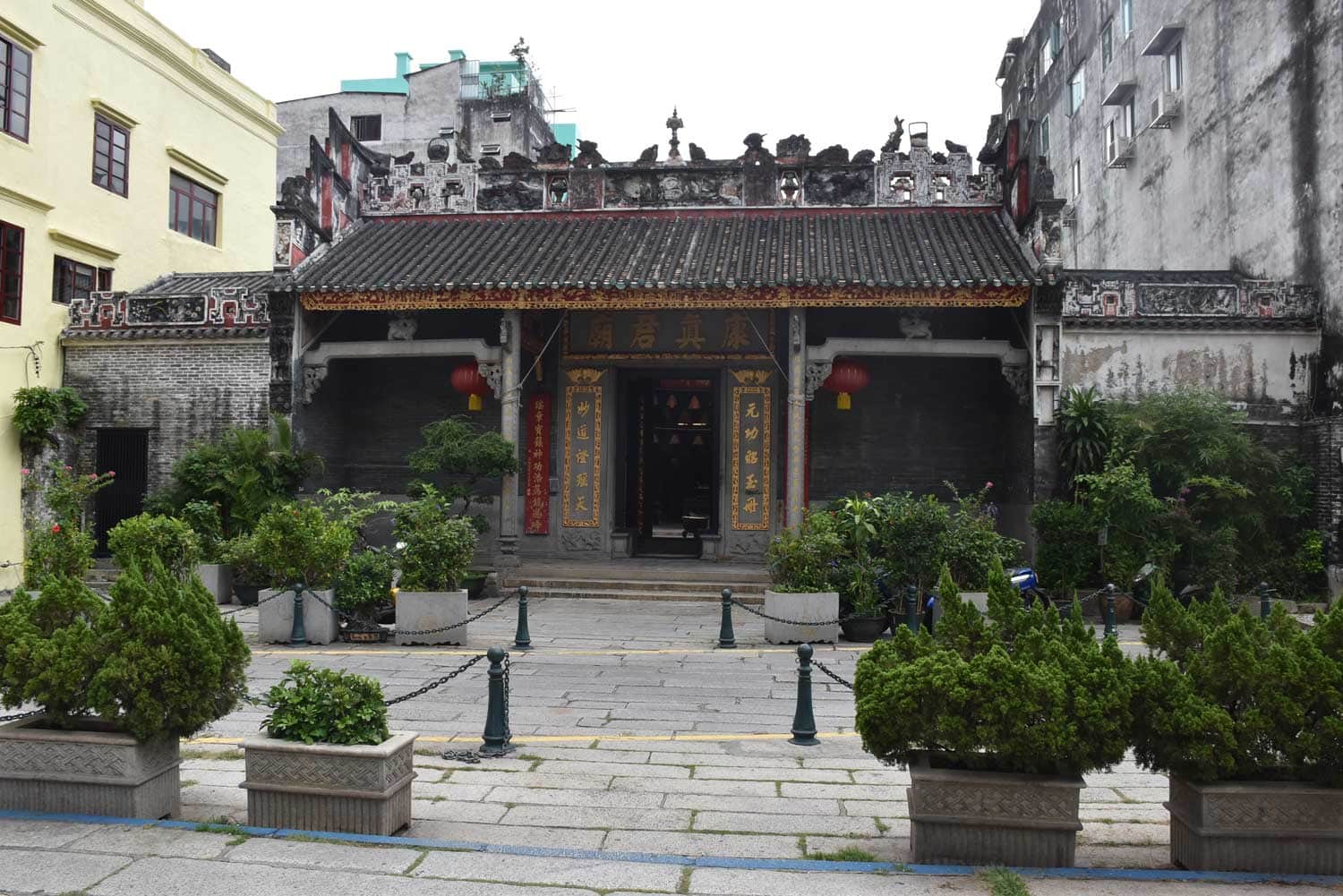 Prior to land reclamation, the temple used to be right up against the Inner Harbour shoreline, which is now several hundred feet away. 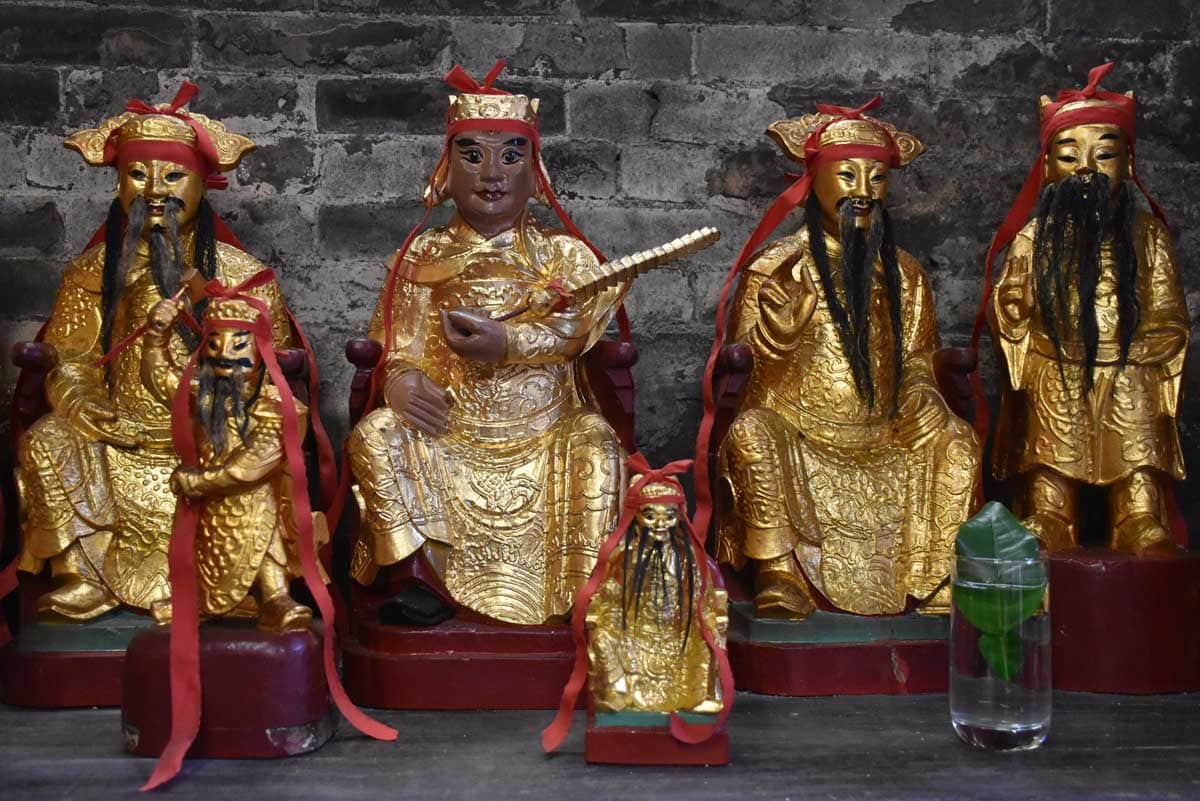 Since the word “bat” in Cantonese sounds very close to Heavenly Luck, they are common fixtures in Southern Chinese temples, and two gold ones greet visitors at the entrance door. The main altar is quite elaborate and the side chambers pay homage to even more deities, and I’d be lying if I said I knew who any of them are. 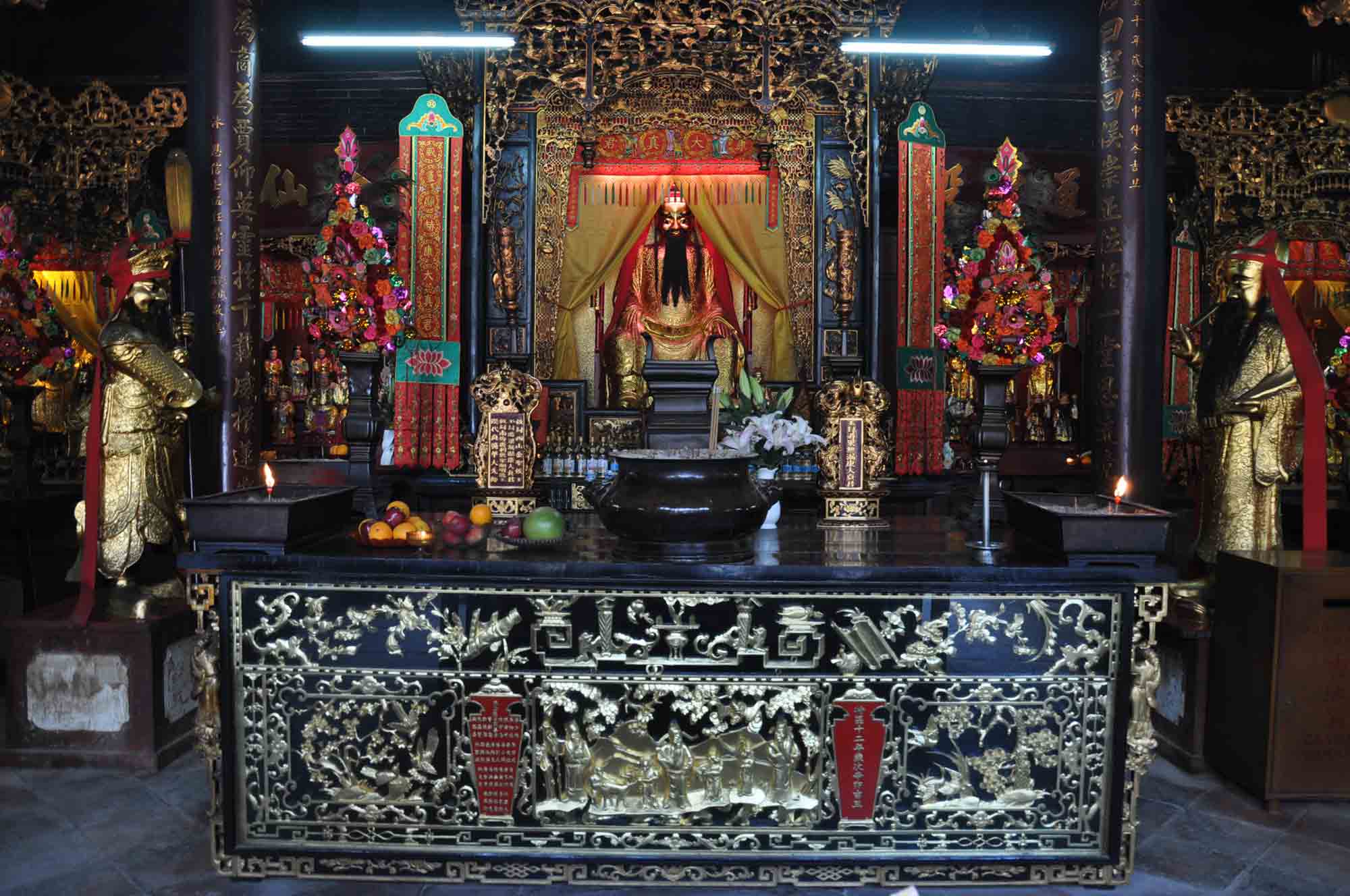 But at least the photos don’t look too bad! 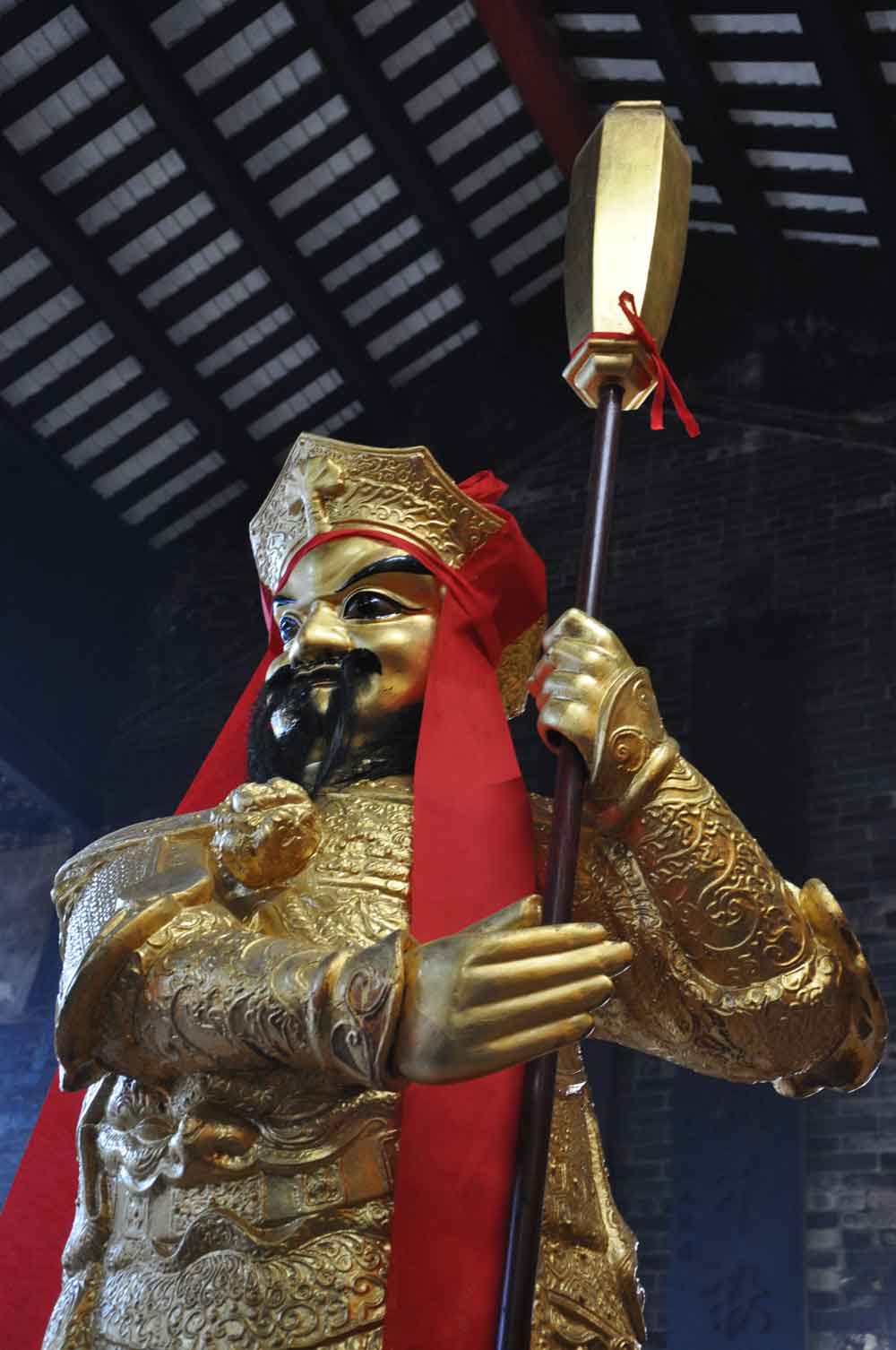