The St. Lazarus District was next. 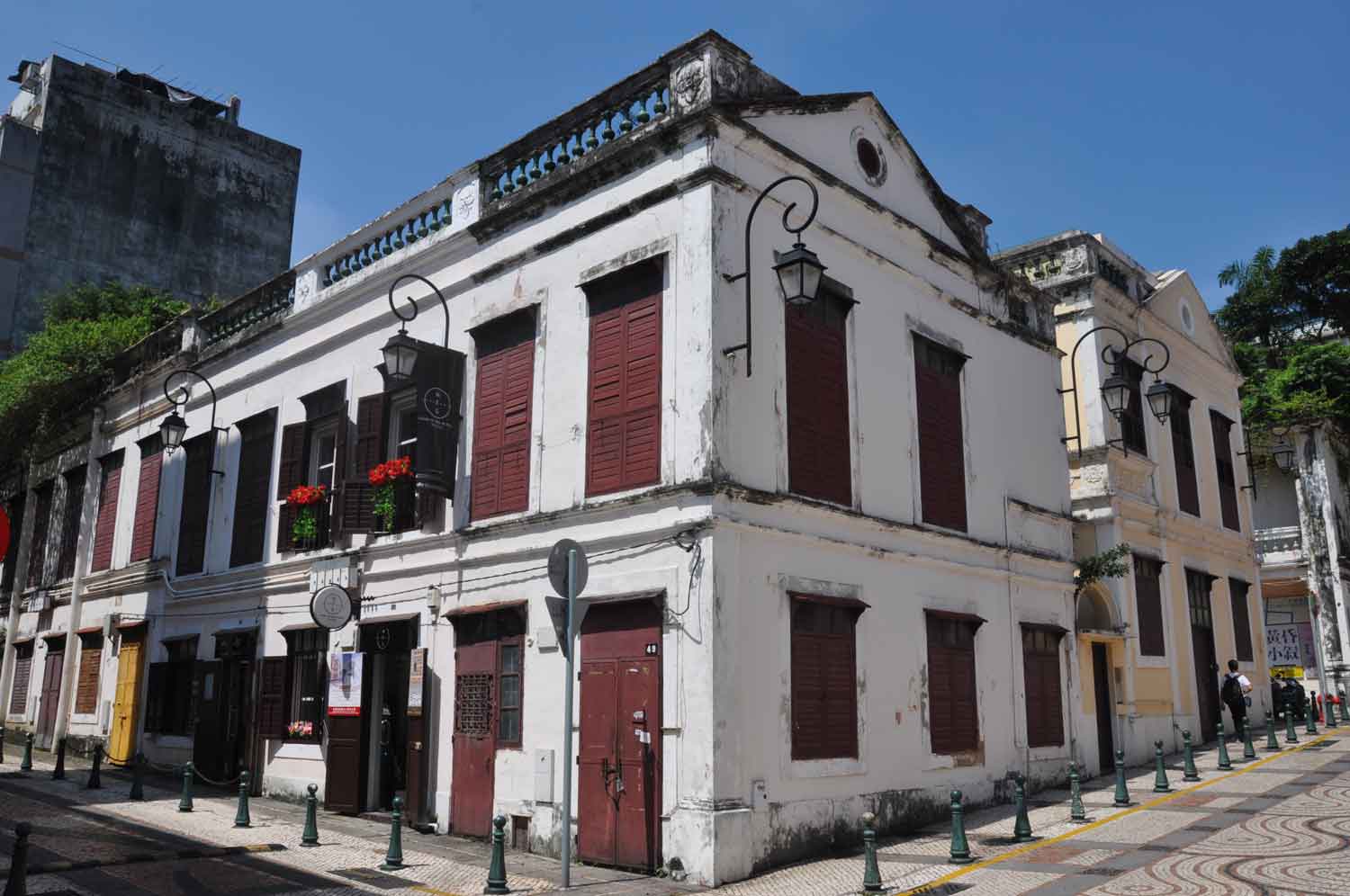 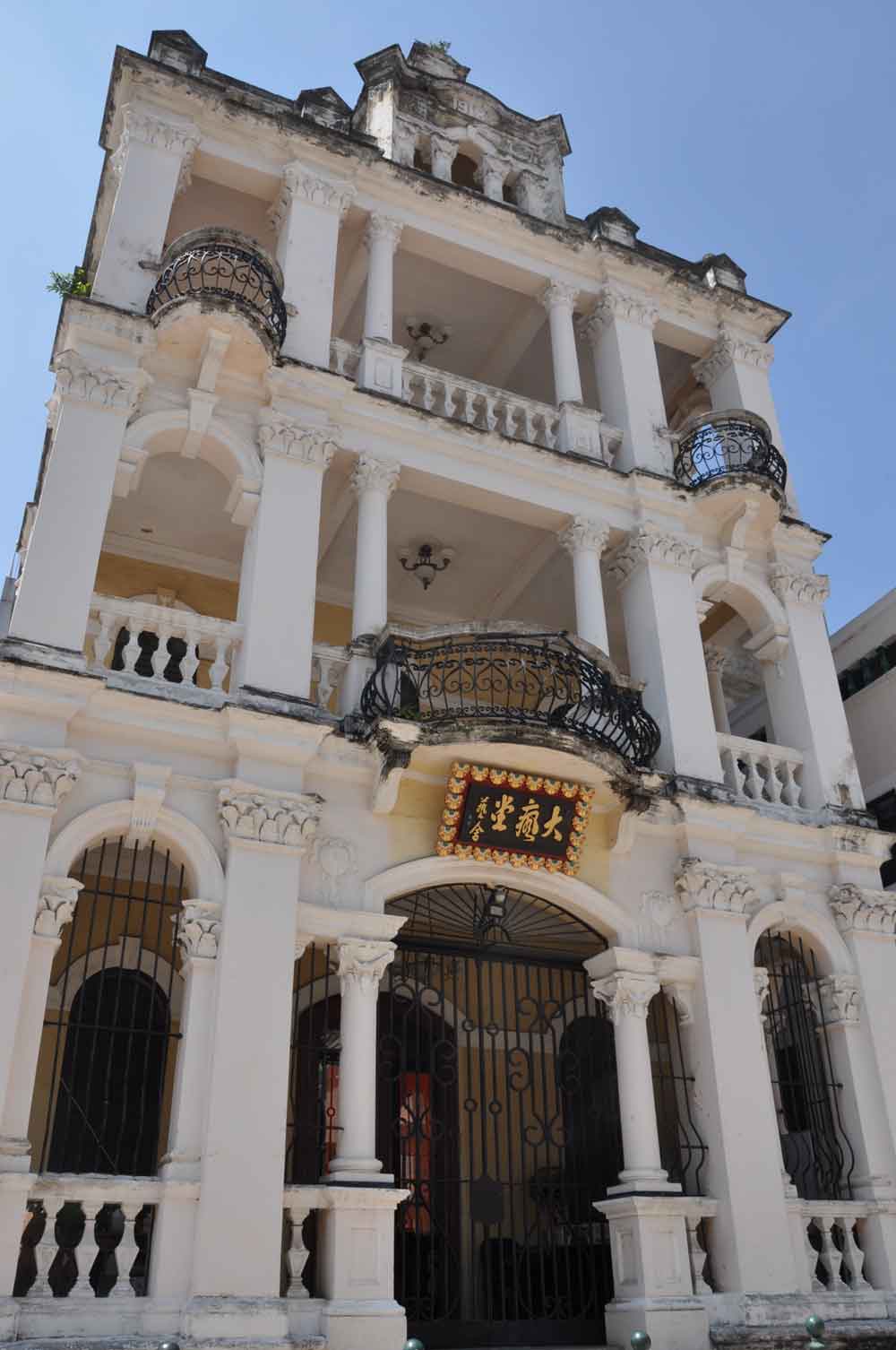 I mean, are we in Portugal or Asia here? 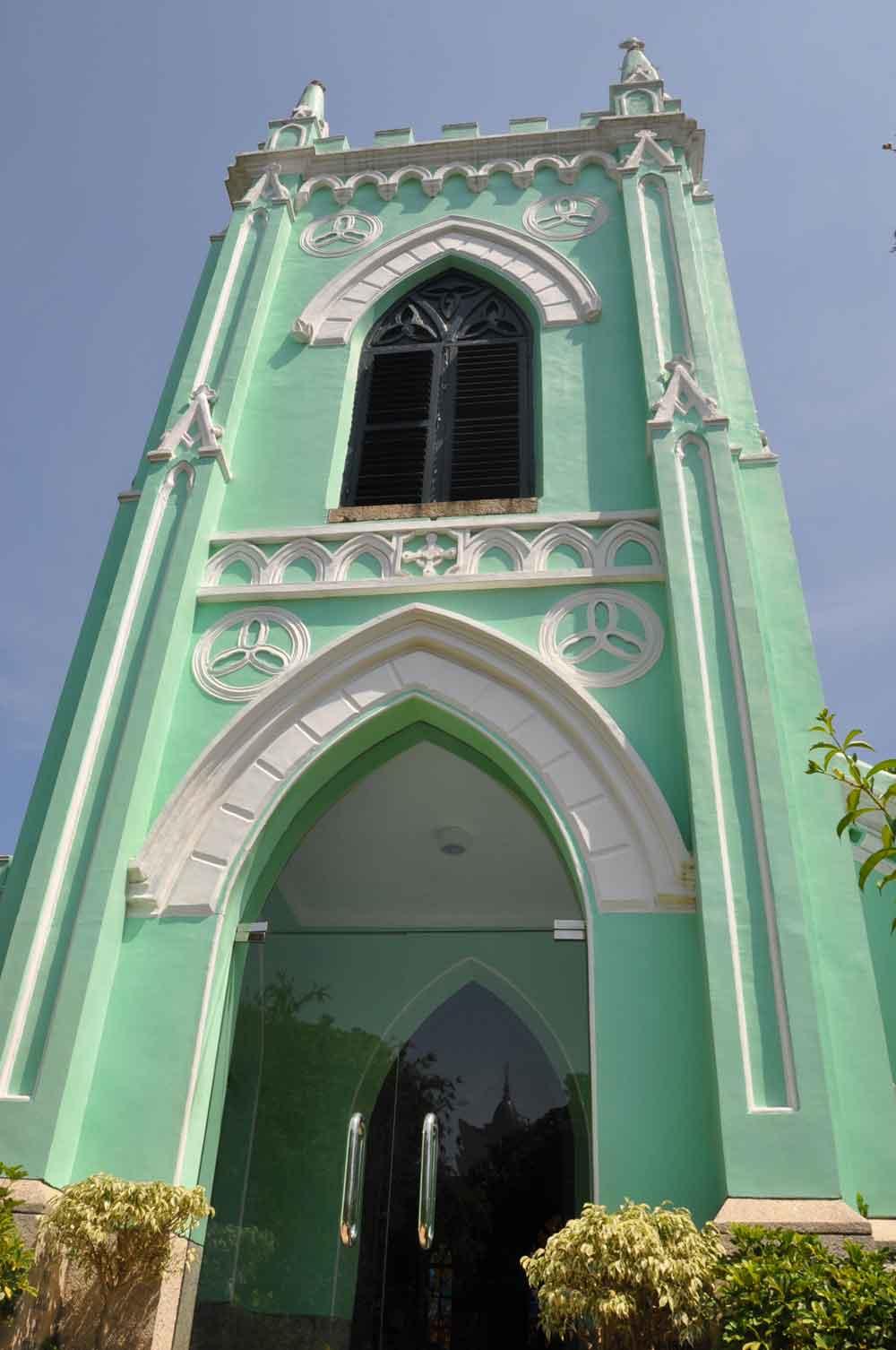 Only 10 minutes walk from St Paul’s, the cobblestone streets and brightly painted Mediterranean buildings are home to Macau’s burgeoning arts scene, and is a definite must see for anyone visiting the city. 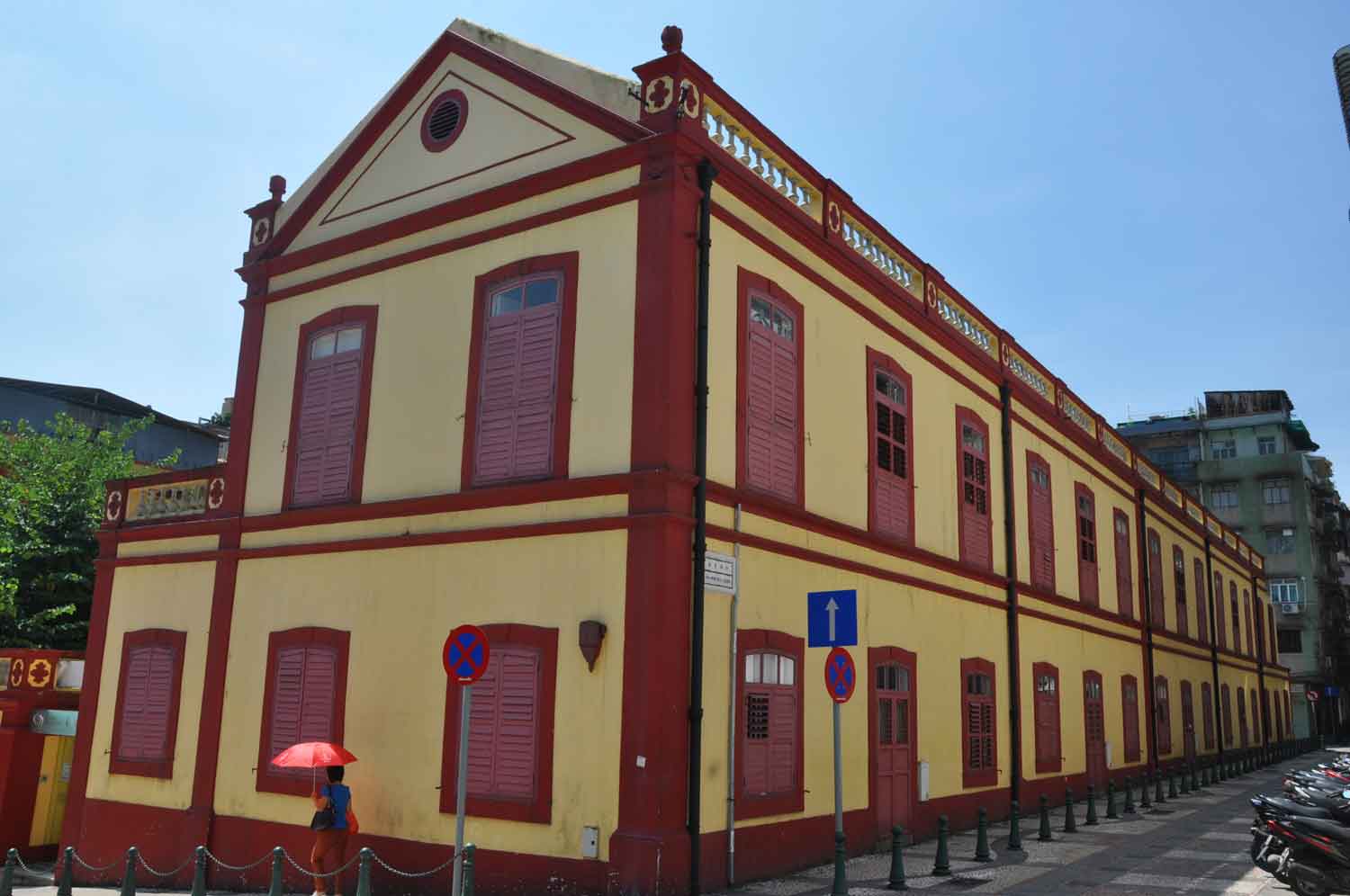 Mu Yi and I spent quite a bit of time in the building beside the Old Ladies Home, 10 Fantasia, looking at all of the art on display. 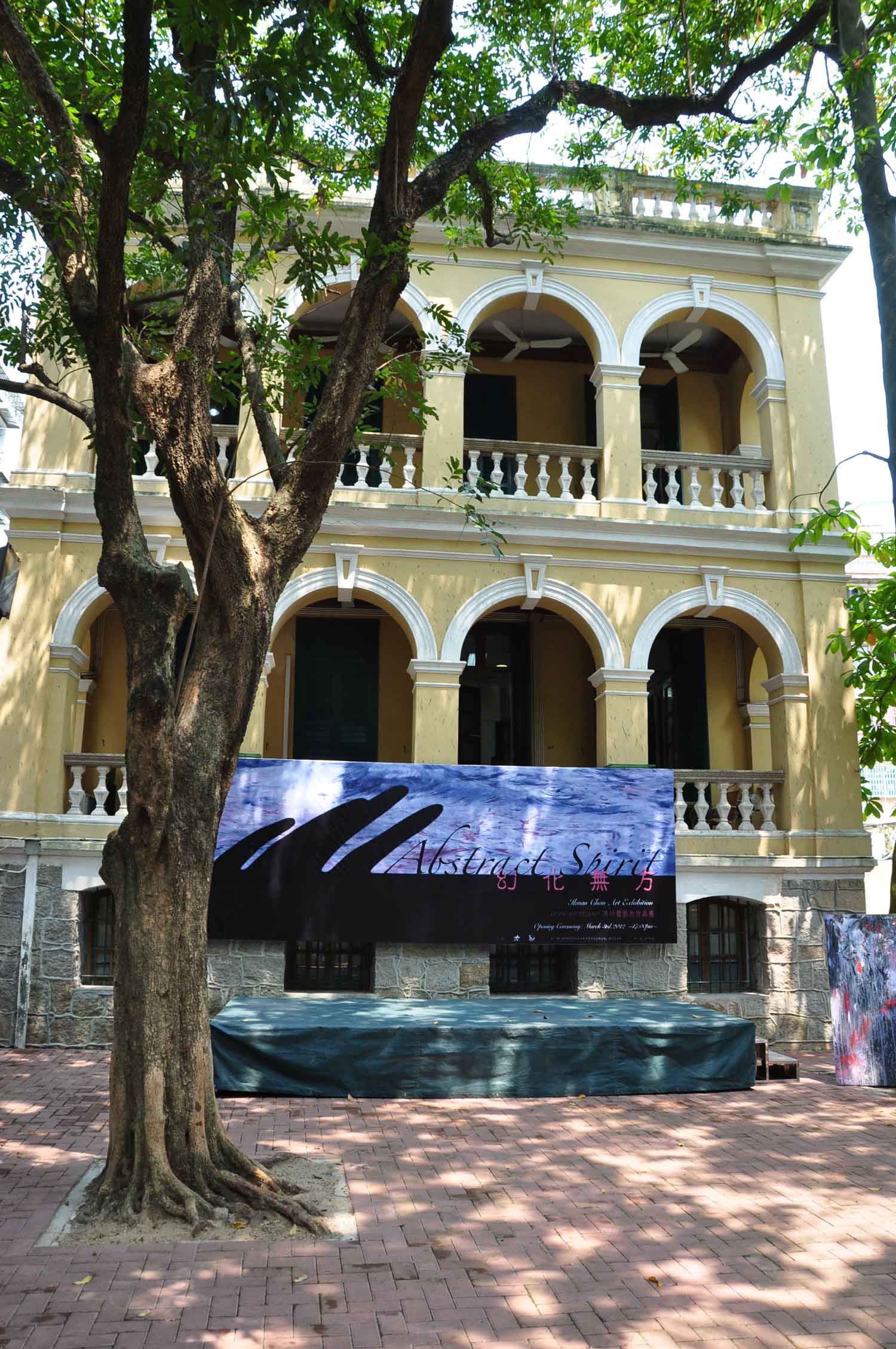 The main exhibition was a photo series of New York by Ikuan Chan.  Very disappointingly, I didn’t see one excellent photo among the bunch and neither did she.  We met better luck inside though with other artists work, some of which drew inspiration from local places in Macau. 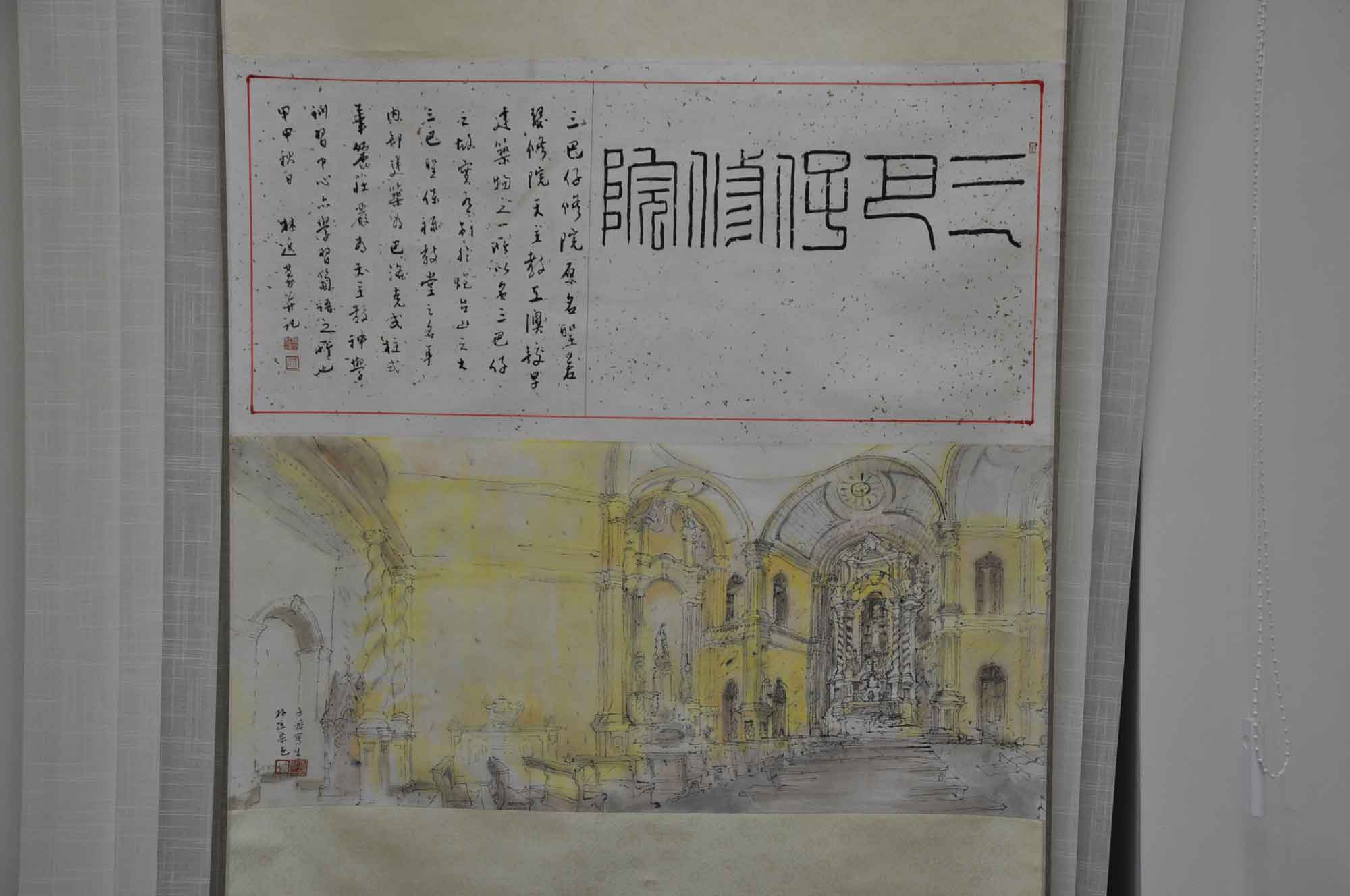 This, of course, is St. Joseph Church. 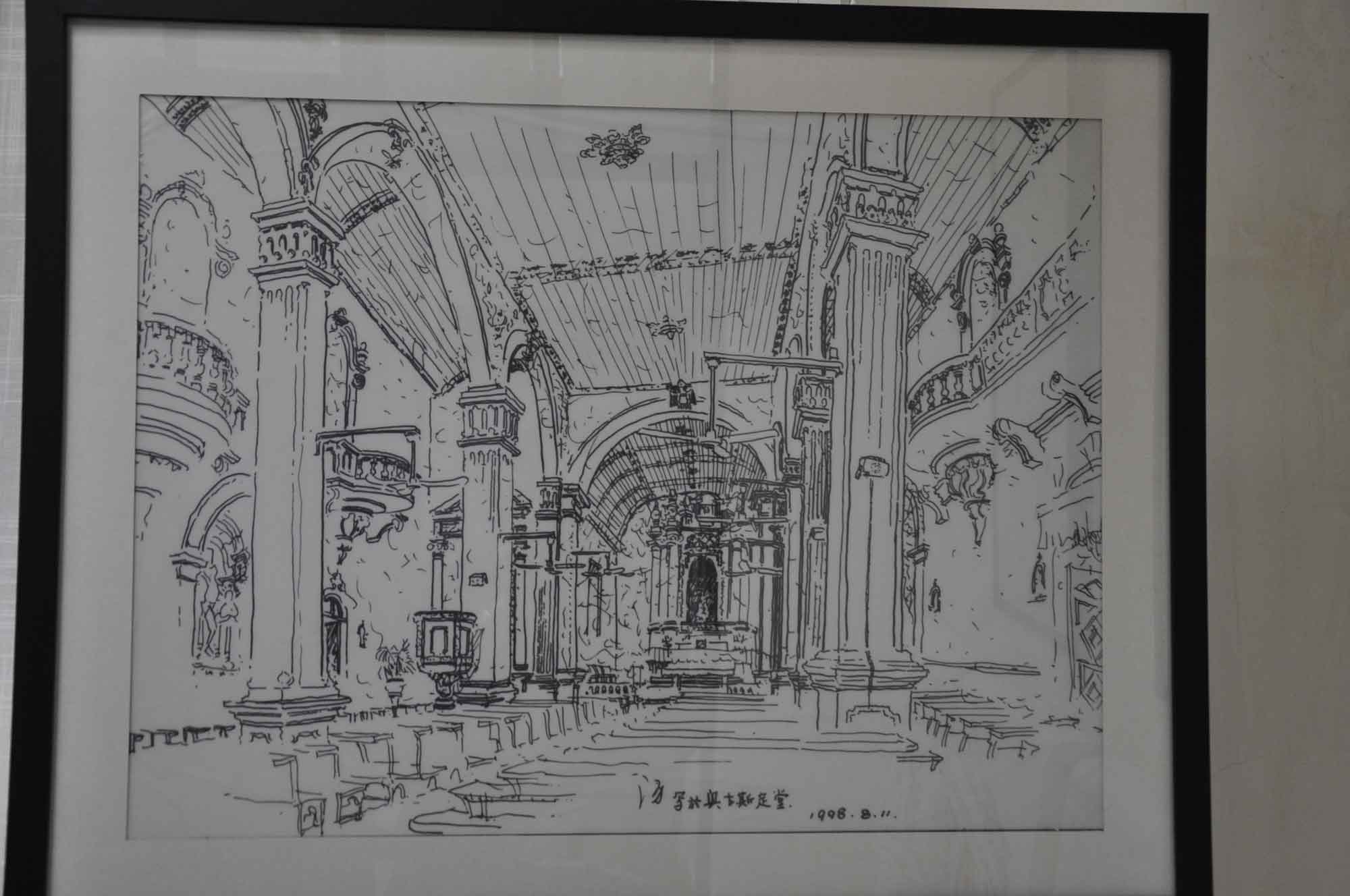 This would be another World Heritage site, the stately St. Augustine’s Church. 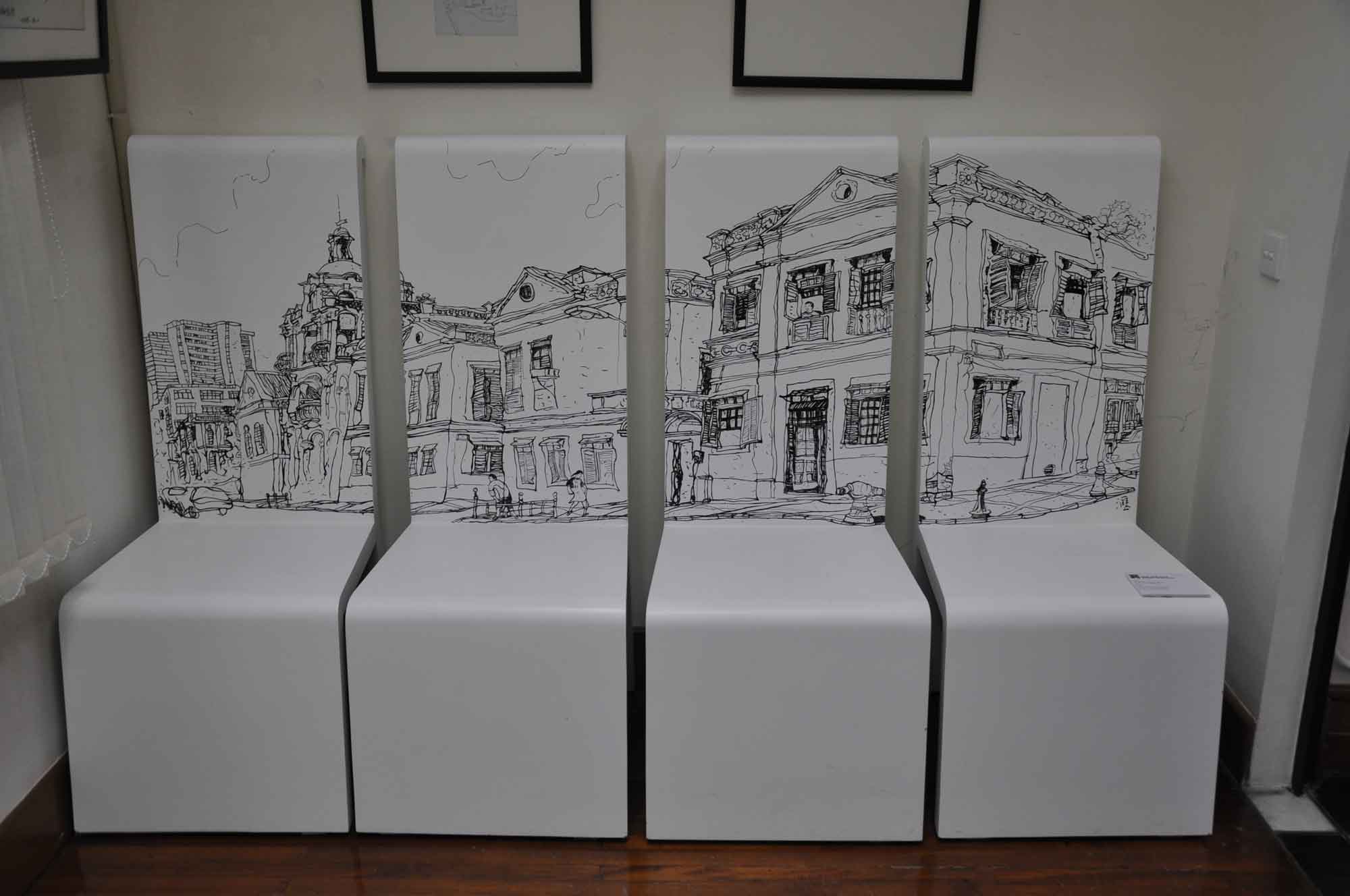 And this set of chairs, which I would LOVE to buy somehow, are of the St. Lazarus District itself. 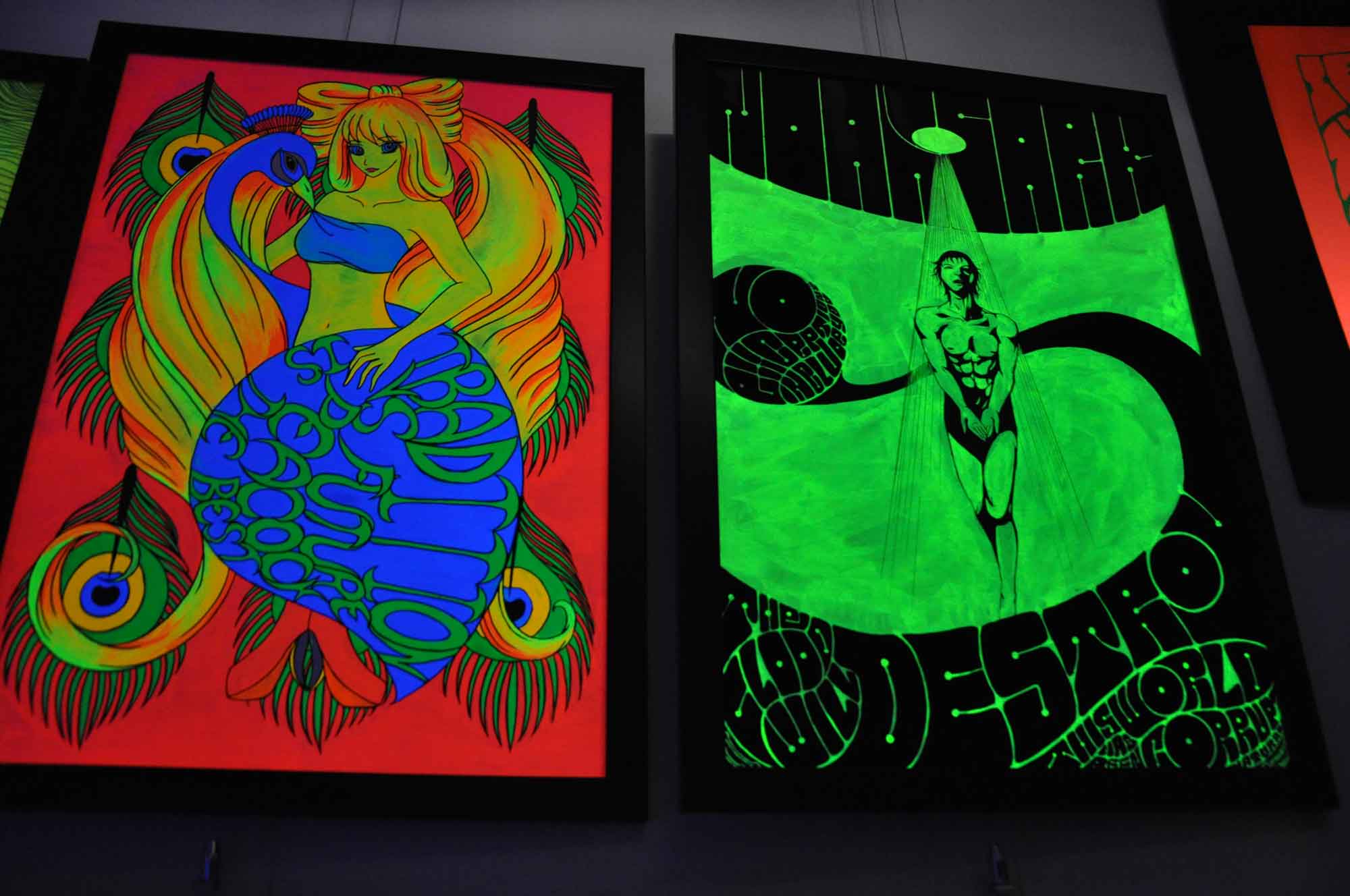 With that being said, we probably like the psychedelic prints on the 3rd floor the most. 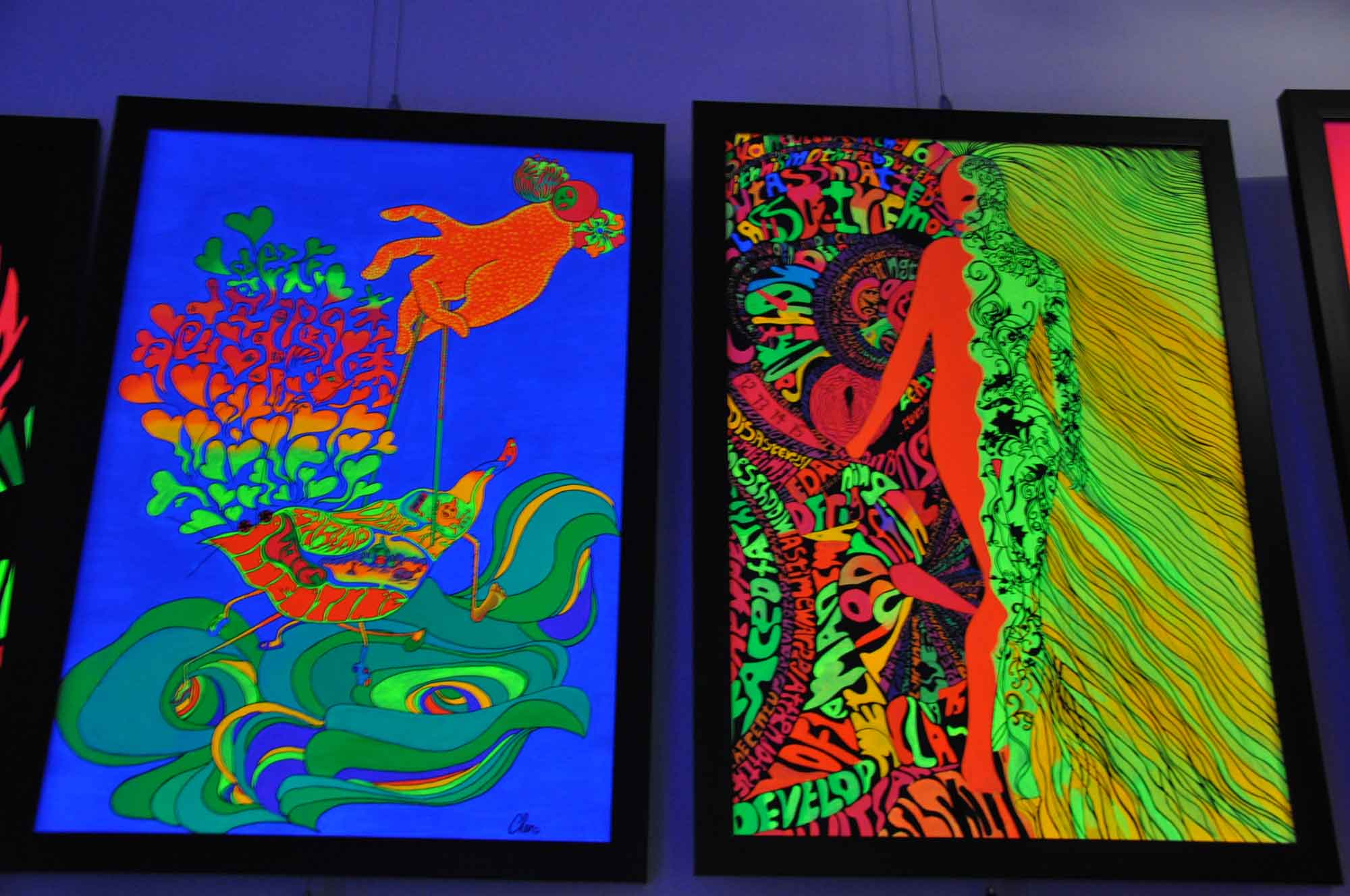 The last thing before lunch was to wind west towards Mount Fortress for the Protestant Cemetery and St. Anthony’s Church.  Originally made of bamboo in 1590, St. Anthony’s has come a long way since then.  Looking a little hard and gruff from the outside, the inside is softly lit and warmly decorated. Since many Portuguese used to marry there, St. Anthony’s is also known as the Church of Flowers.

Beside St. Anthony’s is the much simpler Protestant Chapel and Protestant Cemetery.  Described by Austin Coates as “one of the most serene and tranquil beauty spots of the Far East”, the Protestant Cemetery is a wonderful preserved treasure. The grounds are inundated with a sense of spirit and history, a history that is to be respected, even though the establishment of the cemetery was, in fact, a criminal act.  Allow me to explain.

In the early 19th Century, Macau was separated into two halves, with the line of demarcation being the defensive wall built from San Francisco Garden to the Mount Fortress to Camoes Park.  For the Portuguese, their only concern was with what happened within this wall.  This is where the city started, where it developed, and where all of its wealth was located.  It was also the area where the Portuguese buried their dead, and only Christians were allowed to be buried there.  The area North of the city walls was mostly the domain of the Chinese.  Even though it technically belonged to the Portuguese, they ignored it, and most of it remained grazing fields and unkept farmland.  This area is where the Chinese buried their dead, and there came to be hundreds of tombs there.  They saw it as Chinese land belonging to them, and they did not permit foreigners from any country to be buried there.

Protestants living in Macau, of which there were a great number, therefore had a big problem: they had no place to dispose of their dead.  Their only chance was to do it outside the city walls in secret and hope that it escaped the attention of the Chinese.  If the local Cantonese were to see it, they would immediately band together and offer resistance to it.  Anguish, screaming, obscenities and sometimes even physical violence: this is what a Protestant burial in Macau entailed in 1820.  After the burial was completed, the graves were often destroyed by the Chinese in defiance.

In 1821, the first man to translate the Bible into Chinese, Robert Morrison, lost his wife and infant son, who both died during childbirth.  He was able to successfully bury his son but when he returned later to bury his wife, he was opposed and harassed by the local Chinese.  Even after he pleaded with them to let the burial continue, so that his wife and son could rest together, he was refused and could not continue.  As a devout Protestant, this must have been unimaginable.  As if losing his wife and son was not enough, he could not even give them a proper burial.

Luckily for Morrison and the other Protestants in Macau, the owner of Casa Garden was friendly with the British and he agreed to sell a part of the garden to them so they could build a cemetery there.  The problem with this, of course, was that it was illegal.  For one, only Portuguese were allowed to own land in Macau, and two, Protestant burials within the city grounds were not permitted. The Macau Governor, however, still approved the sale, even though he knew he may face serious repercussions later, not only from his own civil superiors in Goa, but also from the Bishop and other religious authorities in Portugal and abroad.

The Governor’s gamble paid off however.  No one created an uproar and the cemetery opened in 1821 without incident.  Robert Morrison’s wife was the first person to be buried there, and she would later be joined by her husband and another 160 people, most of them young sailors from the 19th Century.  Perhaps the most famous occupant is the renowned British artist George Chinnery who passed away in 1852.

This was Mu Yi’s first time in a Western cemetery, so I found her comments interesting.  First she didn’t find the place to be scary at all, which is what she expected after having seen so many horror movies.  Instead she felt the grounds had a quiet nobility about them, that it was a place to be respected.  She also had the feeling that time was suspended inside, that by walking in you were going back to 1800 or 1850, or back to the last day these people lived their lives.  Outside those gates, it was today, but inside, it was another century.  I’d never thought of it like that before, but I think I have the same type of feeling.