Cafe Nam Ping is further down the 5th of October Street and I got there at about 2 pm. 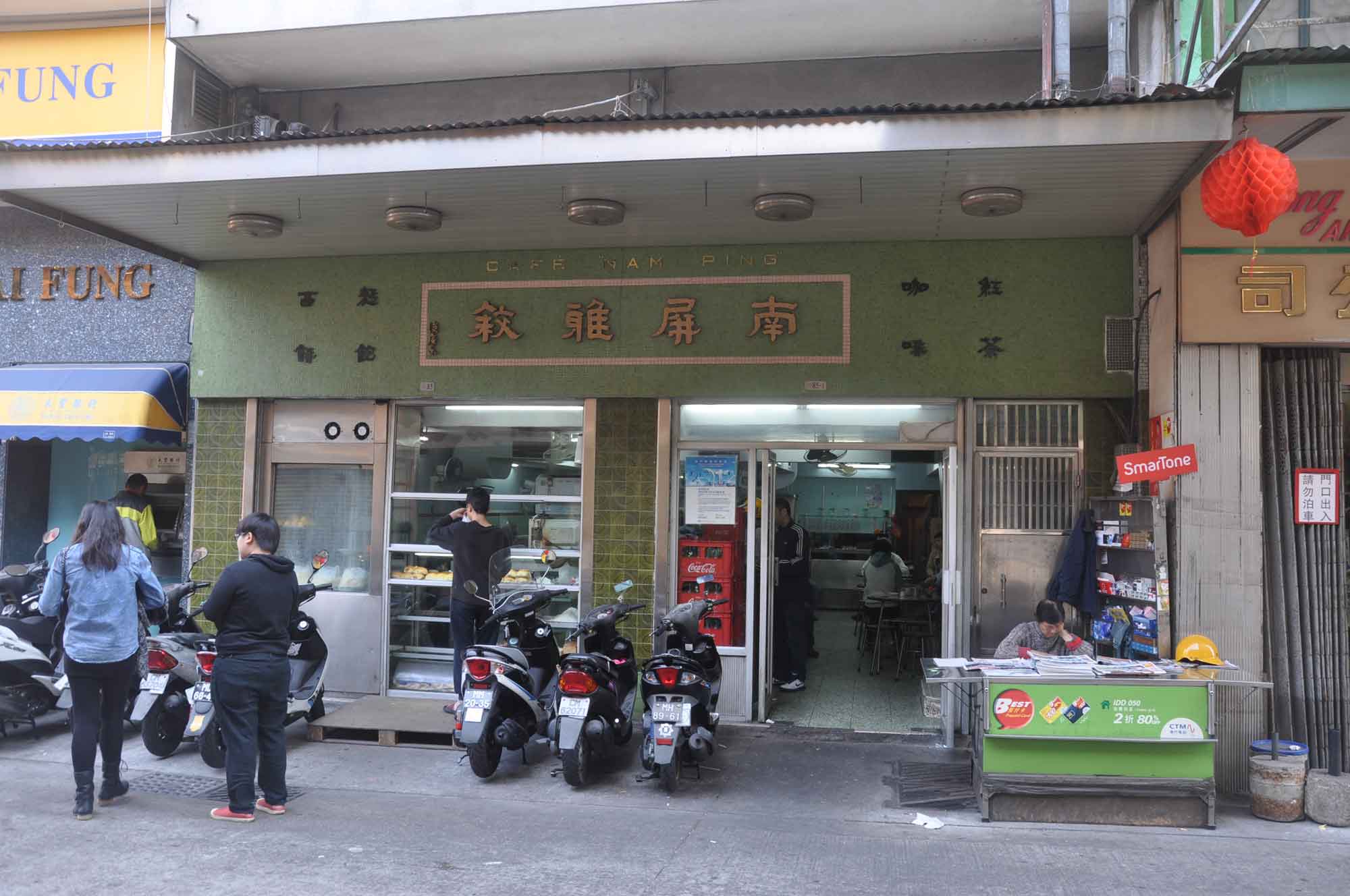 According to the book from the Tourist office, it was opened by the Leong family in 1966, who named it after their home village in Zhuhai.  The first cafe in the city to be air conditioned, they just use ceiling fans now instead. 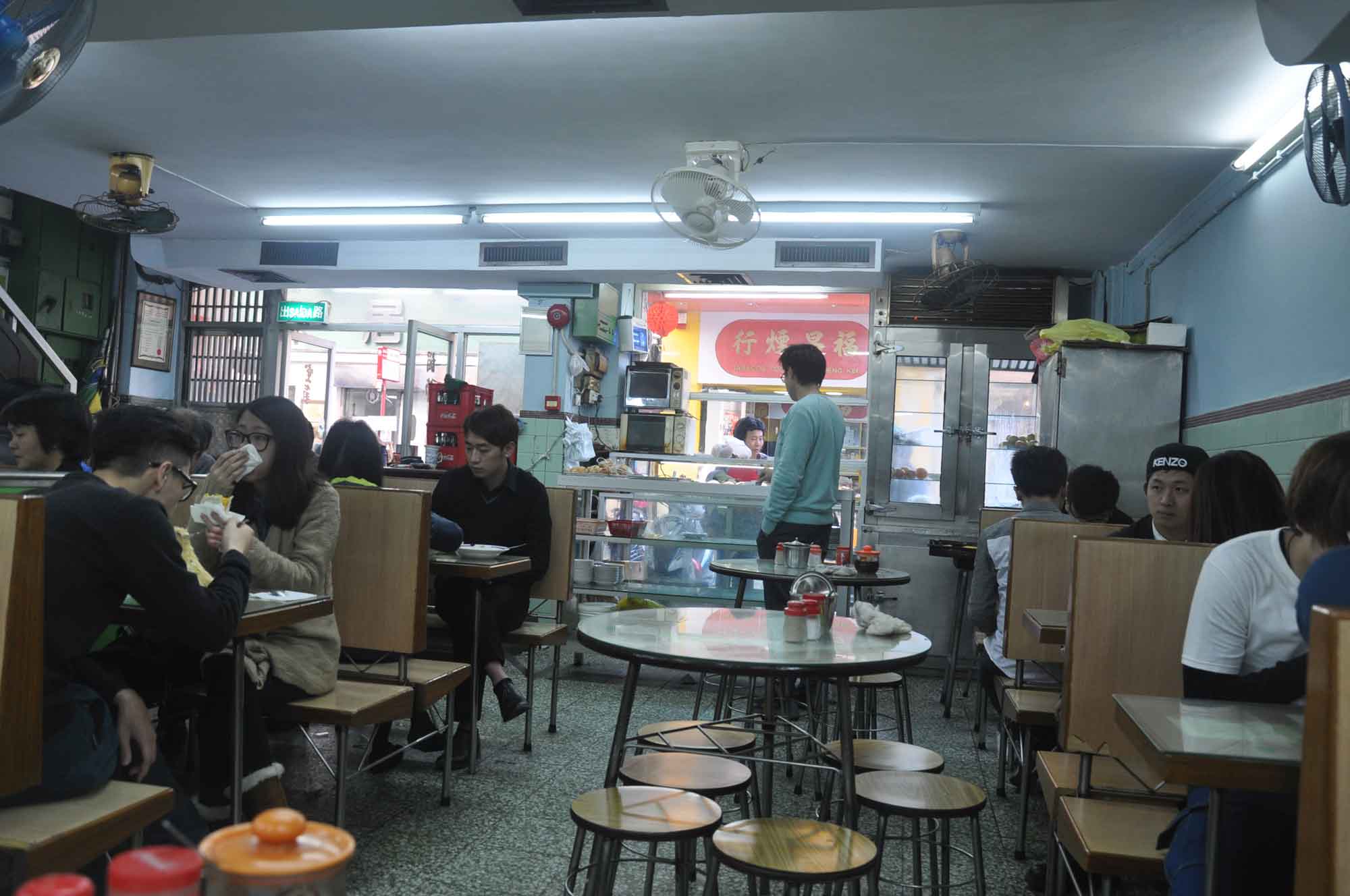 The most difficult problems facing Cafe Nam Ping these days are inflation and manpower, so that’s why most of the employees have been hired from inside the family.  While the owner on the one hand wishes that it was easier to find people, he’s happy at the same time because he can keep his family together.  He’s also proud that his waitresses never write anything down, they rely on memory to remember the orders. 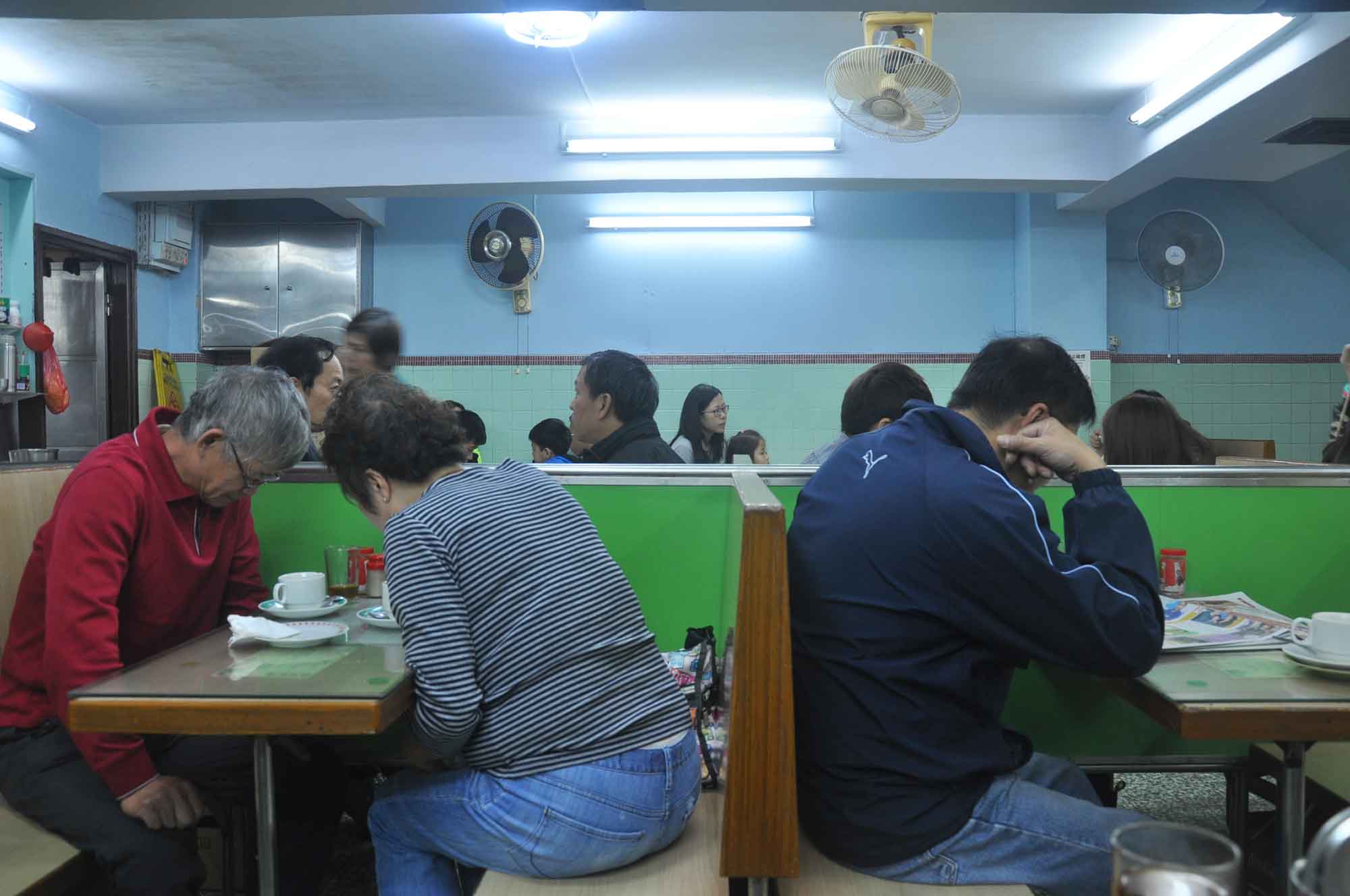 Billed as a nostalgic tea restaurant, mostly frequented by older patrons, the eldest of which is an 80 year old man who comes to read the newspaper everyday no matter the weather, Cafe Nam Ping is in fact a pretty boisterous place.  Packed when I got there, the service staff was constantly moving table to table, yelling out orders, while other customers weren’t shy about shouting for some service or the bill.  Extremely cheap, the majority of Nam Ping’s selections are under $20, and only simple fare is available, like soup, sandwiches, and noodles. 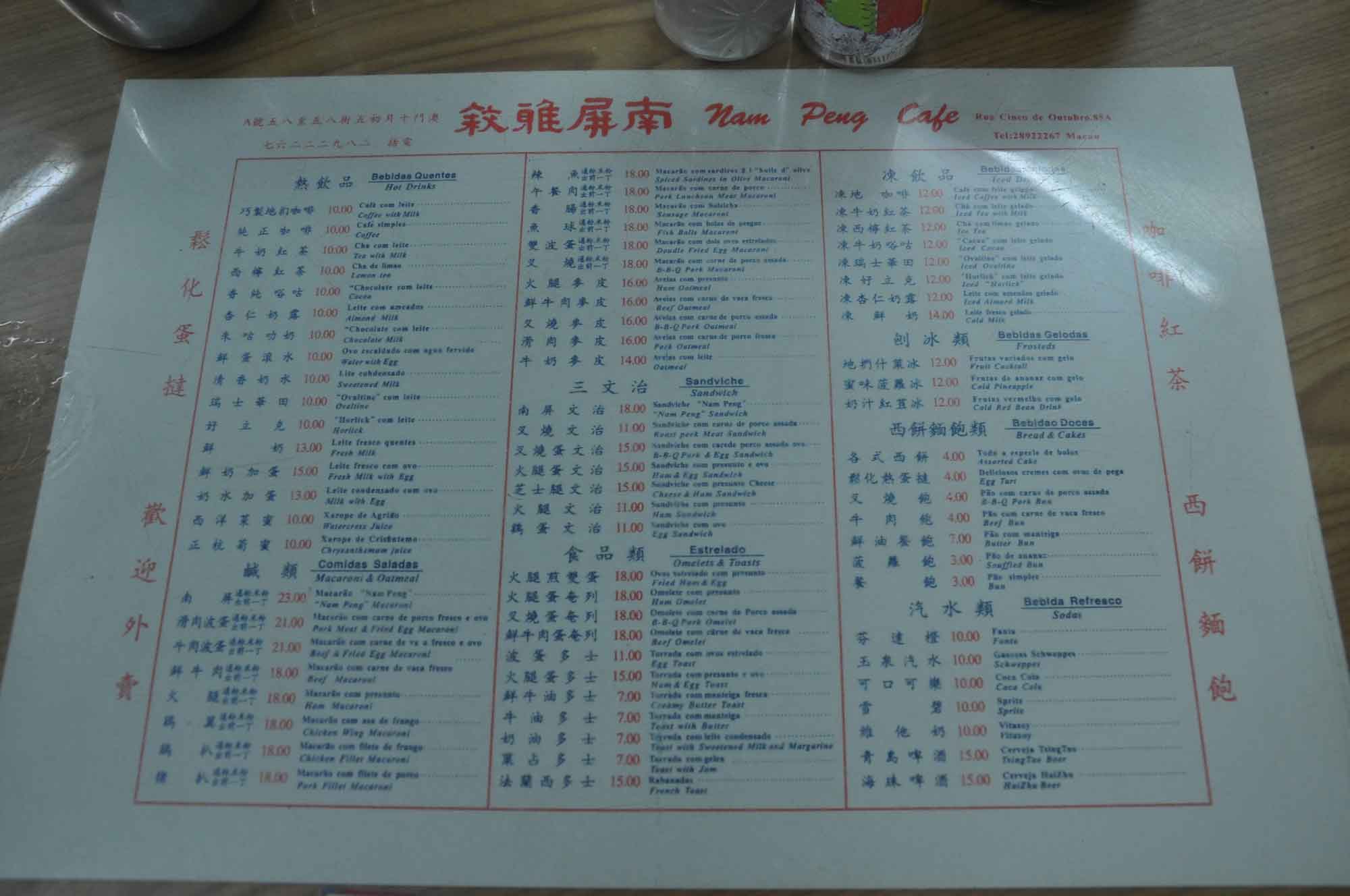 I went with Spiced Sardines in Olive Macaroni, which I expected to be a dry noodle dish, but in fact turned out to be more akin to soup.  Whatever, the noodles were a little spicy but good, and complemented the sardines well, fine value for only $18.

I also tried two sandwiches, Roast Pork and Ham, and found the Roast Pork to be very nice. Done with just the right amount of oil and fat, the sultry grease danced on the tongue.

The Ham sandwich, on the other hand, was bland in comparison and probably needed a bit more meat.  Of course, with both of them only 11 Mops each ($1.38 US), I couldn’t really complain too much.

As a budget dining option, the food at Cafe Nam Ping does not disappoint when judged by that criteria.  One thing to keep in mind is that the meek don’t get served there.  If you try to be polite by just raising your hand, you’ll probably be ignored.  Rather, the thing to do is yell out when you need something, and take pleasure in doing so.  When it’s time to settle the bill, don’t bother calling for a waitress though, just pay yourself at the cash register by the door.

A little travel tip before I continue now.  The area in and around Rua Cinco de Outubro has long been one of my favourite areas in the city.  In specific I mean all of the little streets between Rua do Mercadores and Rua de Guimaraes, San Ma Lo and Rua do Tarrafeiro.  The same holds true for the area south of San Ma Lo, in the maze of streets binded by Rua do Almirante Sergio on the West and Rua Padre Antonio/Rua de Sao Lourenco on the East.

In the Sofitel review, I think I termed this area the slum land of Macau, which was probably an unfair characterization.  Yes the buildings are old and don’t look that nice but it’s not like the neighbourhood is seedy and unsafe, full of dealers and degenerates.  It is instead, an amazing area just to walk through and explore, where narrow paths wind into side alleys that lead up to staircases and little lanes that turn out to be dead ends.  Meanwhile, the hustle and bustle of life goes on all around you.  Should you be in Macau for longer than 3 or 4 days, then by all means set aside some time to check this extremely interesting area out.

My next stop of the day was the Vintage Sounds Museum on Rua das Estalagens, right around the corner from Cafe Nam Ping.  Located on the second floor of the Tai Peng Electronic shop, the museum showcases over 200 pieces of antique audio and visual equipment, the majority of which are phonographs or gramophones. 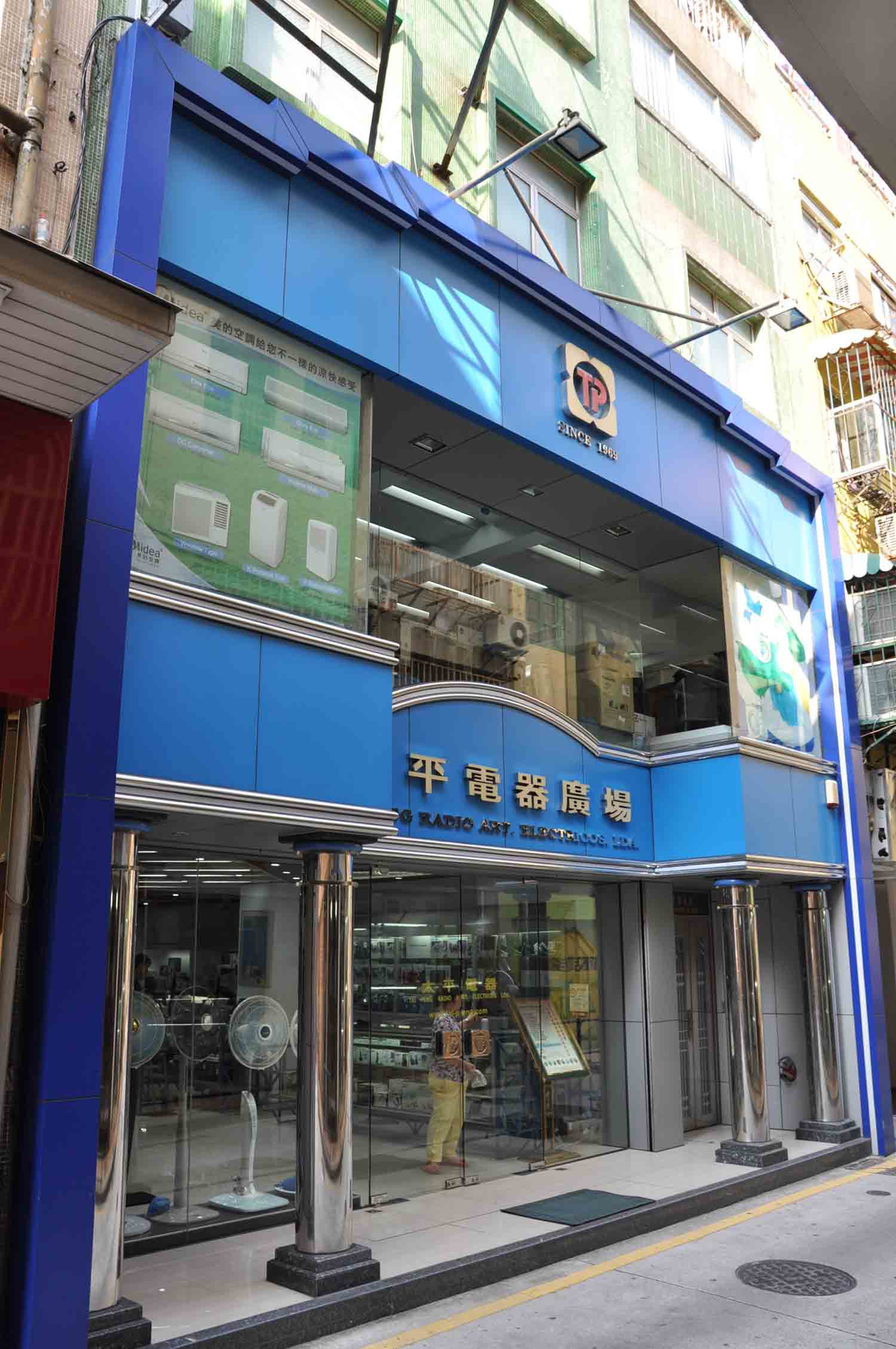 Since the owner collected most of the things in Canada, it’s a pity that the radios and televisions can’t be turned on, given the different electrical outlets used in Macau.

Barring that, all of the equipment would still be functional.

Originally known as phonographs, gramophones were the brainchild of Thomas Edison, who invented them in 1877.  Throughout the years, they underwent various modifications and when they went electric in the 1940’s, they were given a new name – record players or turntables.  Now, I’m old enough to remember records, but doesn’t it blow your mind that children today probably wouldn’t even know what a cassette tape was, let alone a 45?  Times and technology do change fast.

When gramophones were originally made records weren’t used, but cylinders instead.  The capacity of each cylinder was very small, perhaps maxing out at only four minutes.  Just like record players, gramophones also use a needle, called a stylus, to trace through grooves on the cylinders, thereby picking up and playing the sound.  Unlike record players however, gramophones could also record music too, which was done by putting a diamond tip on top of the stylus, making it into something of a cutting knife.

Music was then played into the gramophone and the sound vibrations would prompt the stylus to cut deviations or grooves onto a blank cylinder, thereby recording what it heard.  If you wanted to make 100 copies of the same song at once, you would need exactly 101 gramophones.  One gramophone would play the music and the other 100 would record it simultaneously, and that was just to get a lousy four minutes of sound!  Think about that the next time you take 8 seconds to copy 500 songs onto your iPhone.

The highlight of my visit was hearing one of the gramophones in action.  I was able to listen to about two minutes of a song that was recorded in 1910 on a machine that was made in 1900.  Unbelievable.

The fellow in charge of the museum is a local Macanese man who previously spent 20 years in Canada, doing his high school and university there.  He doubles as the de facto tour guide, and does an excellent job providing background about the history of the machines.  He also did me a big favour even letting me in the door, since the museum usually doesn’t open on the weekend, nor for solo travelers.  The normal rule is that there has to be at least two people and no more than five.  In order to visit, appointments need to be made at least one day in advance, so try emailing first (antique@tai-peng.com) and then telephoning later (853-2892-1389) if your email gets ignored (which it usually does).

The largest issue facing the museum is that it doesn’t receive any government support so it can’t afford to hire full time workers.  It only opens when the man running it has time to take out of his personal life to come over and give the tours.  And with entrance tickets only 30 Mops, it’s a wonder he even does what he does.  If you ask me, the Macau government needs to step in and provide some funding, so that one of the best museums in the city can stay open everyday.

After the Vintage Sounds Museum I headed back to the San Va to rest up and prepare for my evening dining engagement at the Grand Lisboa’s signature Cantonese eatery, 8.